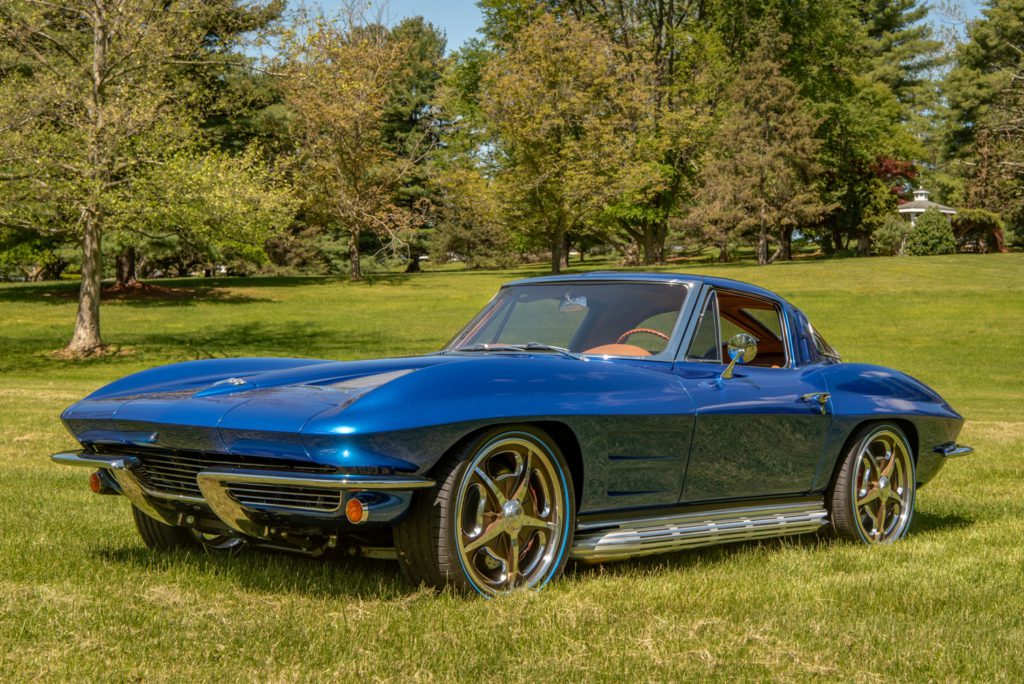 A 1963 Split Window Corvette was always coveted by Dave Semel, but he really wasn’t interested when a project car first surfaced on his radar. After looking the rough Corvette over, it followed him home and he started an 8-year journey to create a one-of-a-kind resto-mod Corvette. We think his creation is something special, but we’ll let this car’s story and images speak for themselves.

The 1963 Split Window Corvette kicked off the second generation of the Corvette, America’s sports car. Almost 11,000 split window coupes were made, with nearly an equal number of the convertibles selling during the first model year. The cars came with 327 CI V8 engines with horsepower varying from a stock 250 to 360 hp.

The quad headlights were retractable for a cleaner look when not in use. While the second-generation Corvettes were made through 1967, the split window design only lasted for the first year. Many questioned the visibility out the rear window and the convertible was the more desirable unit among buyers during the subsequent years for the second generation model.

Semel, a 51-year-old medical director for Pfizer, had already restored a 1958 Corvette when a friend mentioned he knew of a 1963 Spilt Window that was available. He checked out the Corvette and brought it home in late 2011.

The previous owner had started the restoration but had lost interest. The car was rough with the shell stripped down to the bare fiberglass. The door panels and carpet were gone. Semel got it functional and running and drove it around his neighborhood trying to determine the route to take in restoring the car.

Semel knew he could go the full classic restoration route, but would need to find date-code correct parts and gear. The car was already not a matching numbers car and Semel realized it would take a long time to locate the parts before he could even begin that type of restoration.

Or he could go the resto-mod route and incorporate modern technology but keep the classic looks and style of the 1963 Split Window Corvette.  This route would allow the car to have a modern ride and still evoke the classic look of the early Corvette. After months of looking at alternatives, he decided in 2012 to follow his heart and craft a resto-mod out of the big hunk of classic Americana fiberglass.

The first decision to make was which chassis to use under his car. The original chassis has long been superseded with modern technology available to make for a smoother ride with more control. Since Semel was planning on using an LS9 engine, many suggested that the engine would sit too high and he couldn’t use an original hood with any chassis. That was not an option for Semel and he reasoned that with enough forethought, a solution could be found.

He located a chassis maker, SRIII Motorsports, that came with a good reputation and he even went down in person to meet with Mike Stockdale and verify that the Illinois shop could design something for his needs. He ordered the chassis and had it shipped to his home and the fun began. He wanted the C6 Corvette suspension pieces, both front, and rear, and used a set of Corvette Z06 brakes. 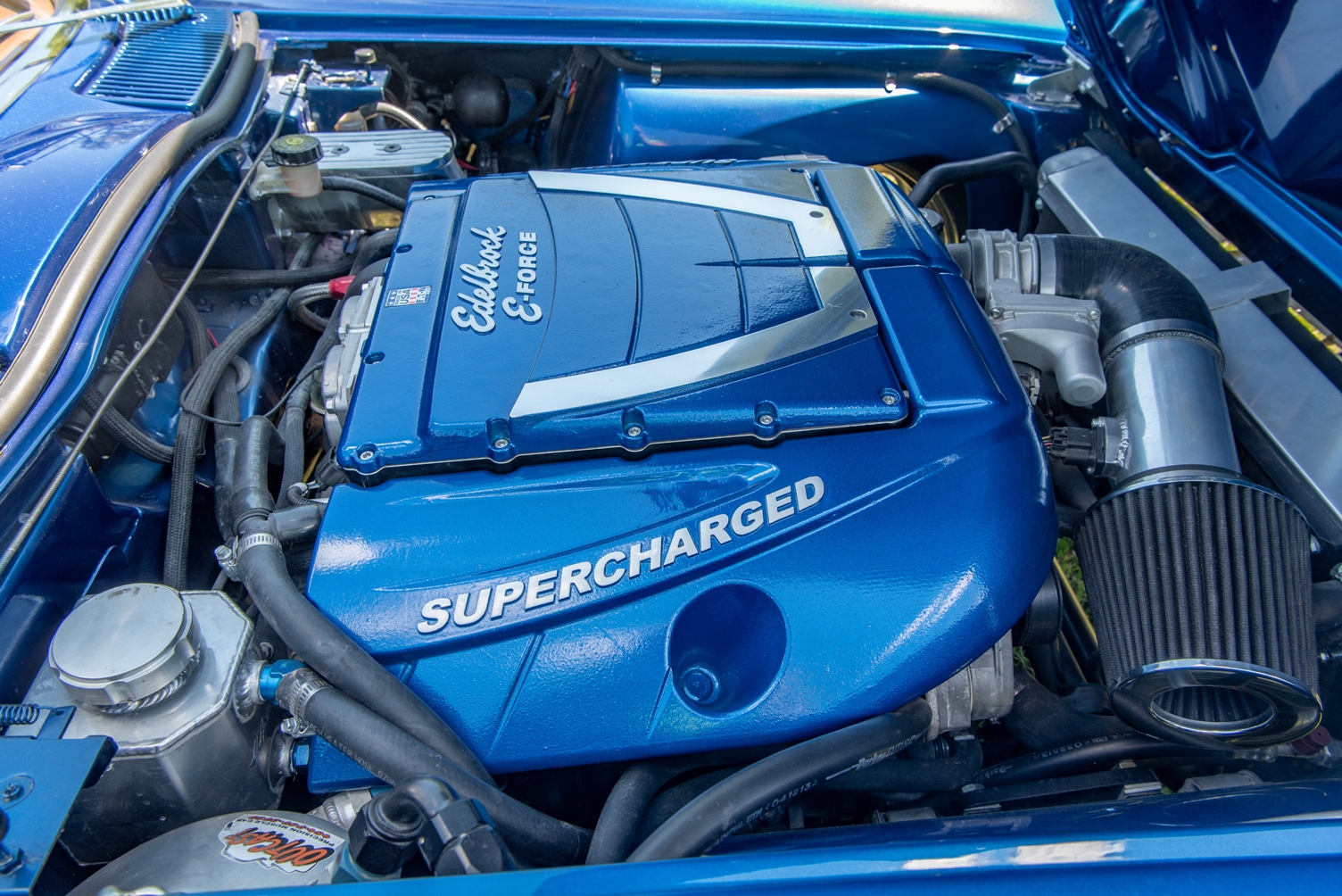 Semel always knew he wanted a powerful LS9 engine for this build. The supercharged engine was used in the ZR1 Corvettes from 2009-2013 and was rated at 638 hp and is still available as a GM crate engine.

But in Semel’s research, he found engine builder Shaun Carter at SMC Performance in Michigan and had them build their version of the LS9, which is rated at 700 horses on the engine stand.  After installation and going through the side pipes, the Corvette dynoed at more than 560 hp and 600 lb.-ft. of torque.

With an engine and chassis determined, he located a nearby builder who took the 1963 Split Window Corvette under its control. The shop smoothed out the body and worked on the car for 5-years. The car was painted a Wild Cherry hue, but Semel was not pleased with how the paint looked when it wasn’t in direct sunlight. He also started noticing other flaws in the workmanship. The builder claimed he was running out of room at the shop and brought it back to Semel’s home for “just a few weeks.”

During that time Semel had more time to look closely at what was done to the Corvette and became more and more dissatisfied. When the builder wasn’t returning his calls that was the final sign that a new builder needed to be located.

Interior Then Back To Fixing The Body

As fate would have it his interior guy, Chris McClintock of Bux Customs, had an opening and Semel knew that if he didn’t use that time slot it might be years before he could get another appointment to install the interior. While the car was being upholstered, another restoration shop was recommended and Semel decided to start fresh with Carlisle Customs and Classics in Pennsylvania with Vinny Scalavino. 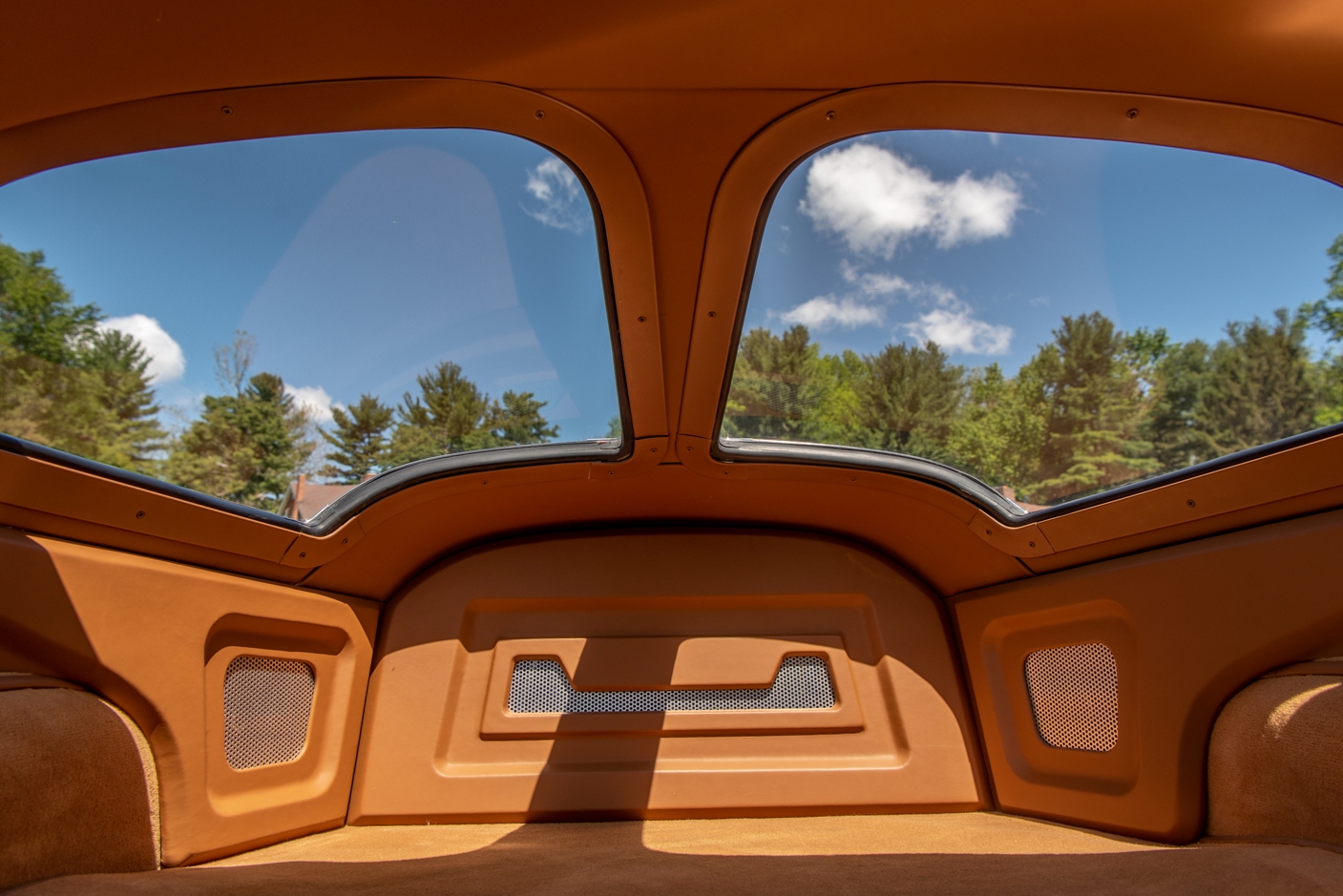 The new shop started back on this build in December 2017 and had to strip down the car and start over with almost all the work. Semel happened to see another car at the shop that was painted blue and he fell in love with the color. It helped that the blue would not clash with his brand new interior. Semel also knew that it would be easier to later match a stock factory color than some custom one-off shade, so he went with Hyper Blue Metallic that was from the 2016 Chevrolet Camaro. 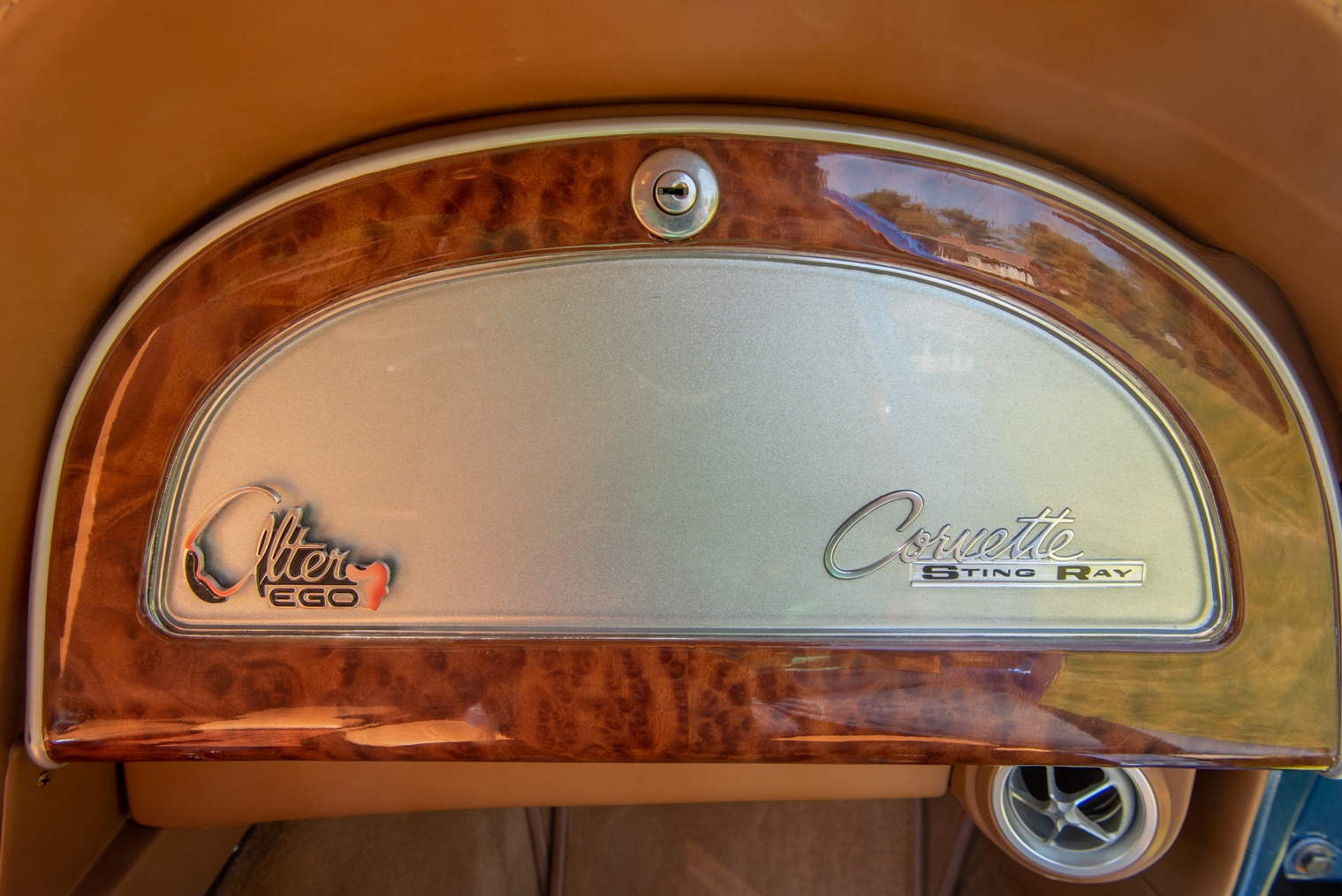 He also saw that many second-generation Corvette restomods kept the stock dashboard and glove box. That was a bit of a bland look for Semel, so he had Main Street Custom Finishing craft burl wood accent pieces to help set off the car’s interior.

The car sits on a set of Accelerator Schott wheels with a bronze finish mated to Diamond Back Blueline tires. The Corvette was finally completed in May of 2021, more than 8-years after Semel started the project. 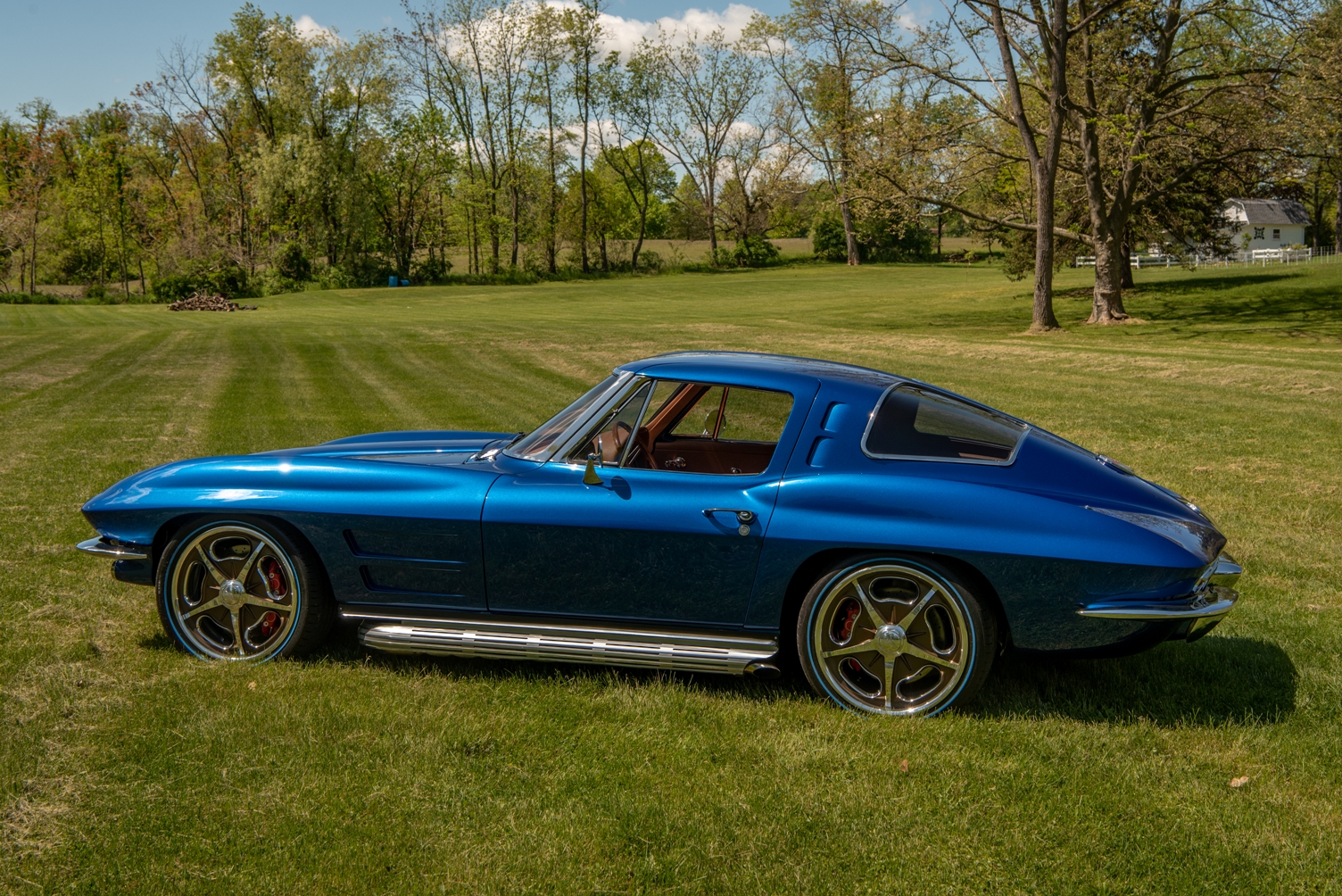 So how did the name “Alter Ego” get picked for the 1963 Split Window Corvette?  An alter ego suggests an alternative self, which is different from a person’s normal personality. Or in this case, the car’s personality has changed from the original 1963 spirit to a modern sports car. Semel explained that “the idea of alter ego comes from the fact that it is a mixture of the old 63 Split Window with the classic lines and features kept as it was back then, but now has all the new Corvette pieces underneath with the custom frame, the coil overs, the C6 corvette suspension-front and rear, the LS9 engine, and the Tremec 5 speed manual.”

The wheels have a bronze tone to them and Semel has plans for the air grates and the side pipes on the Corvette to mimic that tint as well. So I guess like nearly all custom cars, this build isn’t ever really finished.

Semel has been enjoying driving his creation on some shakedown cruises since it’s been done. You’ll find him along with his Alter Ego ’63 Split Window at the Carlisle GM Nationals in Pennsylvania in June, where they will have a special display for GM engine swapped vehicles.

Semel’s Advice For Other Builders

After an 8-year build, Semel offers two pieces of advice for prospective restorations. First, he recommends that “you know what you really want done to the car and how it will look.” He obviously went to a lot of effort to figure out how to achieve what many were saying was not possible.  Second, he advises “to research the shops and people who will be working on the car.” That would certainly give you a heads up for potential problems or the need to look elsewhere for some portions of a car’s restoration.

Semel can’t wait to put some miles on his 1963 Split Window Corvette Alter Ego build and truly enjoy his creation. From the pictures of this Split Window, the 8-year wait was worth it! 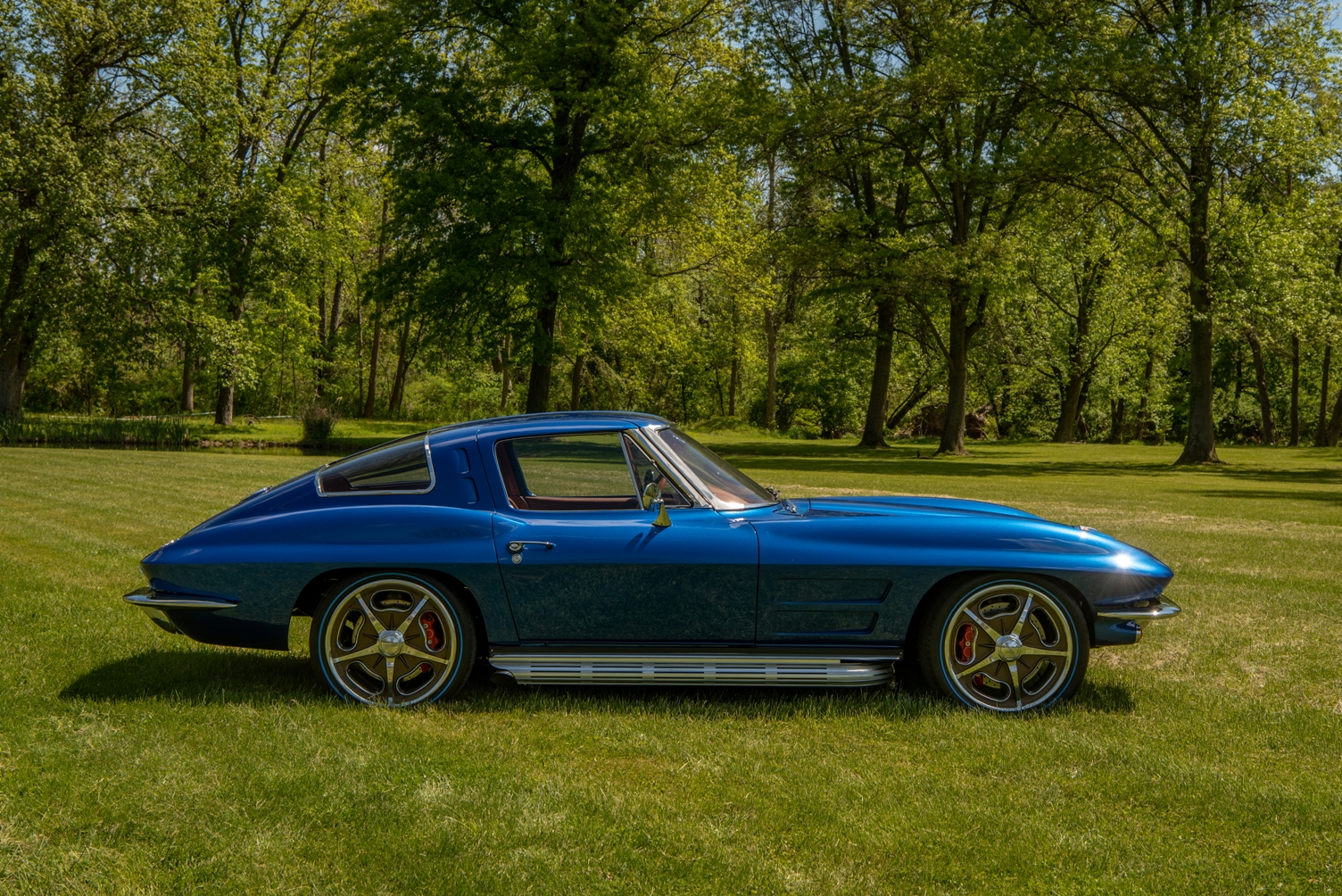 (Some photos courtesy of Cindy Strupp at Revelation Photography.)


8 of the Best 2020 Hatchbacks
10 Forgotten Off-Road SUVs And Trucks
What Happened to the British Automotive Industry and Where i...
Owners Keep These Cars for 10 Years or More
Top 25 Deadliest Cars And Trucks On American Roads
8 Stars With Modified Cars