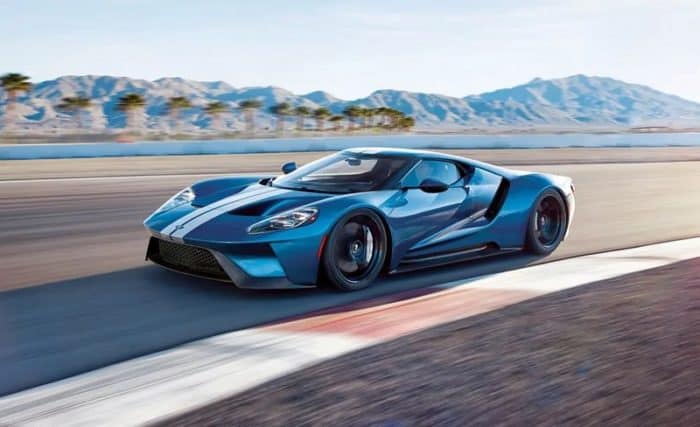 When it comes to the debate over the best American sports cars, there are hundreds of questions to answer and ten times as many opinions. How do you judge an American sports car? Do you decide based solely on track performance, or is there a way to judge the effect a sports car had on entire generations of Americans?

Sure, there are tons of specs and real-world testing that prove which sports car barely edged out another for the fastest 0-60 time, quickest quarter mile, top speed – you name it. The question is, is the mere pace of a sports car the best way to judge whether an American sports car can truly be called “the best?”

The answer to that question is “no.” Americans may love speed, but this is the land of muscle cars and horsepower, and I challenge any American sports car enthusiast to say that the 1967 Shelby GT500 doesn’t make the best American sports car list because it isn’t faster than a Hennessey Venom F5.

The US has made some impressive sports cars over the years since the Model-T. It was immensely challenging to narrow down the extensive list of incredible machines built by American motor companies, but somehow we managed to get it to fourteen. If a sports car is included on this list, then it is indeed one of the best. Here are the best American sports cars of all time: 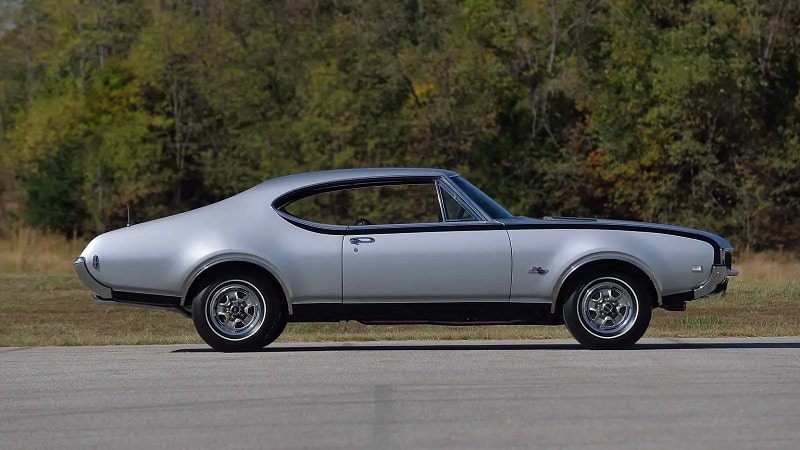 Hurst packed the 442 with a whopping 390 horsepower and enough torque to make a wrench blush. The 1968 Oldsmobile 442 Hurst was built with a Turbo Hydra-Matic 400 transmission which is considered one of the best transmissions ever made to this day. 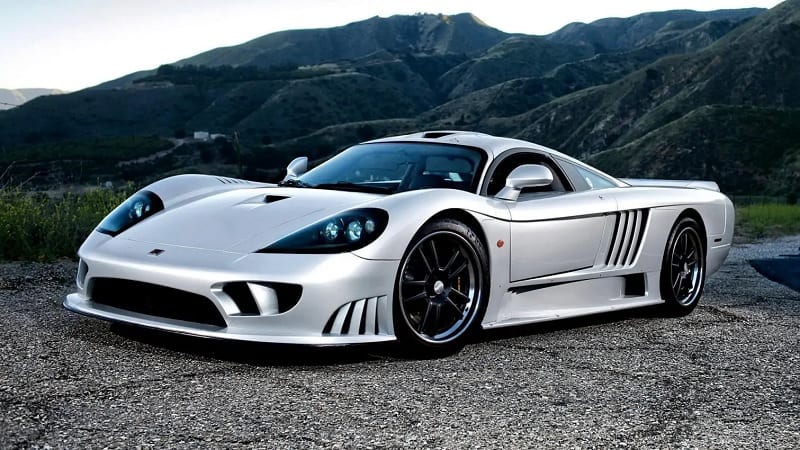 We may never know if Pontiac intended to make one of the most formidable American sports cars to ever roll out of Pontiac Michigan when they built the 1967 GTO, but we definitely know they were happy with the result.

The 1967 GTO was available in three- and four-speed manual transmissions and included Hurst shifters. Pontiac packed a 400-cid four-barrel V-8 under the hood which, combined with the optional Ram Air system, pumped the GTO with a gut-punching 360 horsepower right out of the box.

American sports car enthusiasts have a lot of opinions about the Dodge Viper. Its extra long hood conceals an engine powerful enough to scare a Lamborghini, but it the original couldn’t take a corner for all the horsepower in the world. 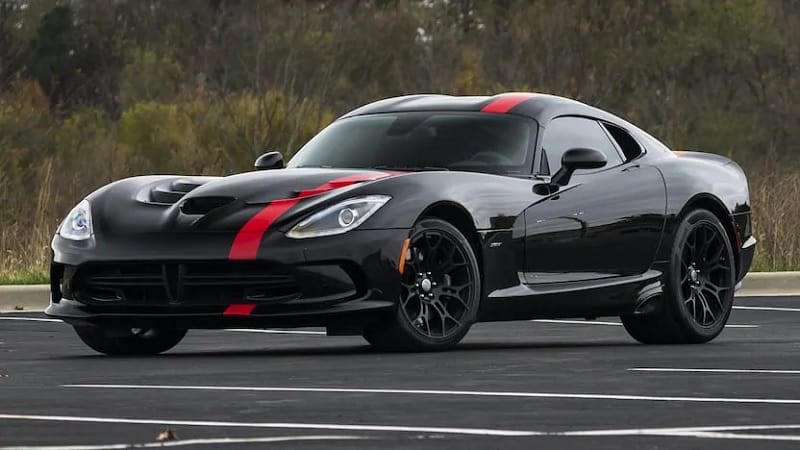 That all changed when Dodge released the Viper SRT. With more than 680 horsepower and 600 lb-ft of torque, the Viper SRT has evolved into a menacing 10 cylinder behemoth. Dodge discontinued the Viper in 2017, but its legacy remains in the nightmares of import racers.

Few cars register as deeply in the collective American psyche as the 1967 Shelby GT500. The GT500 rolled off the floor with a staggering seven liters and 428 cubic inches of engine packed under the little hood. 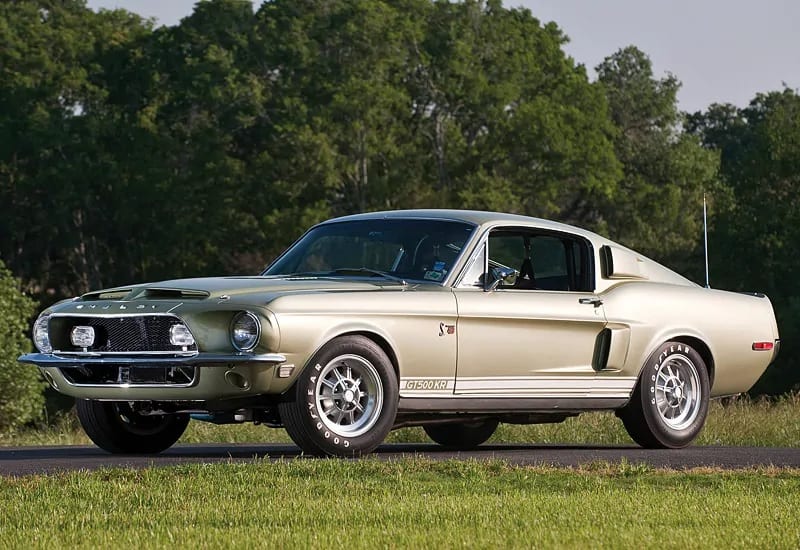 The GT500 stacks an impressive 6.5-second 0-60 time and a top speed of 128 miles per hour. Coupled with a four-speed, full synchromesh, Ford top-loader transmission, it had no problem leaving the competition in the dust on the quarter mile.

The Hennessey Venom F5 is named for the fastest tornado ever recorded, and it’s hard to blame Hennessy Special Vehicles for choosing such an imposing name. This American sports car is fast!

It’s so fast that the exact top speed of the car is still up for debate, but with speeds recorded over 315 miles per hour, it’s easy to see why the Hennessey Venom F5 holds the title of fastest car in the world. The Hennessey Venom F5 comes with a 7-speed single-clutch semi-automatic 6-speed manual transmission and an 8-liter twin-turbocharged V-8.

The Shelby Cobra is a legend of American automotive history. Carol Shelby introduced his masterpiece in 1962 and stunned the racing world by packing a giant 260 cubic inch V-8 into a tiny British AC Bristol. 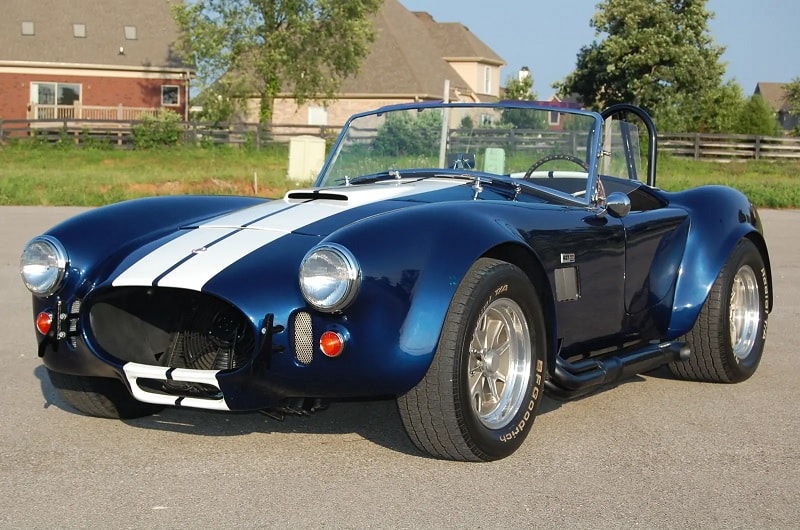 Any American sports car referred to as the “king-slayer” must really pack a punch, and as the fastest, most over-powered Corvette ever, the Chevrolet Corvette ZR1 certainly does that. 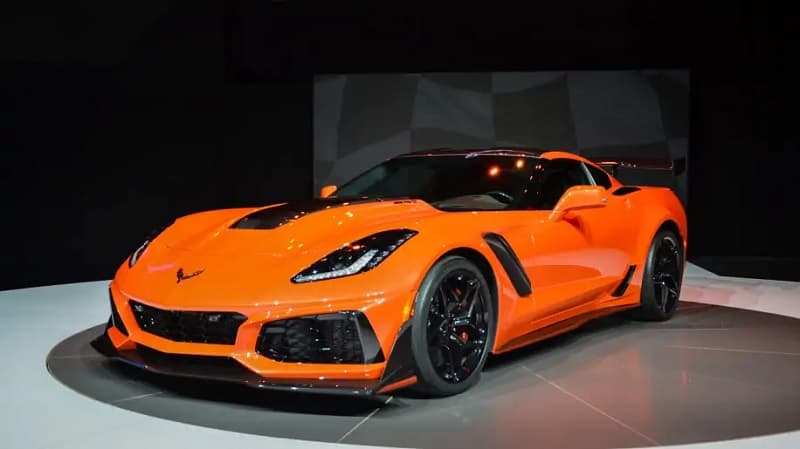 The 755 horses generated by a supercharged 6.8-liter Chevrolet V-8 carry the ZR1 to a terrifying top speed of over 212 miles per hour, and from 0-60 in 2.8 jaw-dropping seconds.

All of that power hits the wheels through a six-speed Tremec TR6060 transmission, which takes the ZR1 from 0-60 in first gear. The Corvette ZR1 proves, yet again, that Chevrolet is the king of American sports cars and is never afraid to dethrone the competition.

The Plymouth Barracuda is just as ferocious and intimidating as the predatory fish whose name it shares. The 1970 Plymouth Barracuda, with its pavement-crushing 425 horsepower Hemi V-8  and optional three-speed, four-speed, and automatic transmissions was the king of the road in the 70’s and an American icon to boot. 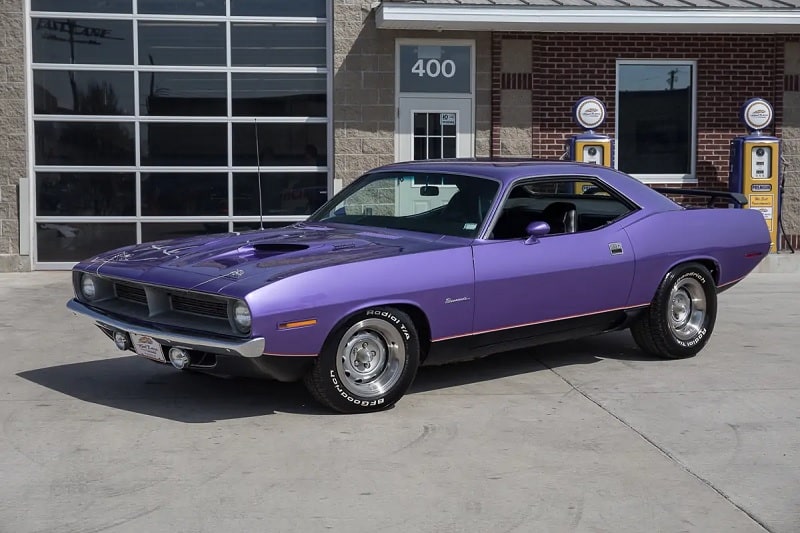 To top it all off, Plymouth looked at the overpowered Barracuda and decided they weren’t going to be through until they offered the powerhouse barracuda in 18 different colors, some of which have names like Lime Green Metallic, Lemon Twist, and Sassy-Grass Green. The power put the car on the scene but the eye-catching colors made sure it was one to remember.

In the 1960s, Chevrolet needed an answer to Ford’s wildly successful Mustang, and they certainly delivered with the 1969 Chevrolet Camaro. The 1969 Camaro was available in three and four-speed automatic and manual transmissions and three different engine sizes, including a massive 6.5-liter V-8. 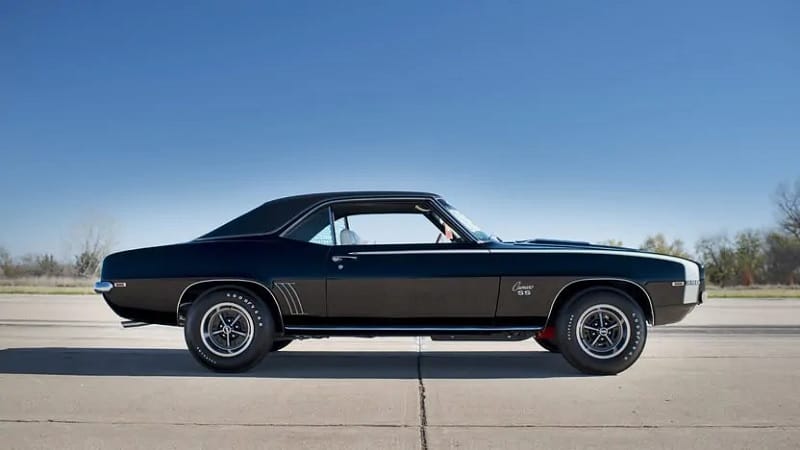 The 1969 Camaro could put up a decent 6.8 second 0-60 time. However, Chevy made it easy for American sports car enthusiasts to modify their 1969 Camaros.

American gearheads dropped bigger and bigger engines into their Camaros to blow away the competition and cement the Camaro into the hearts of nostalgic Americans everywhere.

There is always one Ford GT Supercar at every Ford dealership to remind the minivan and SUV drivers that Ford has not forgotten their racing heritage. The Ford GT Supercar is Ford’s answer to expensive Italian imports Ferrari and Lamborghini, and believe it or not, it’s packing a turbocharged V-6 in the modern interpretation. 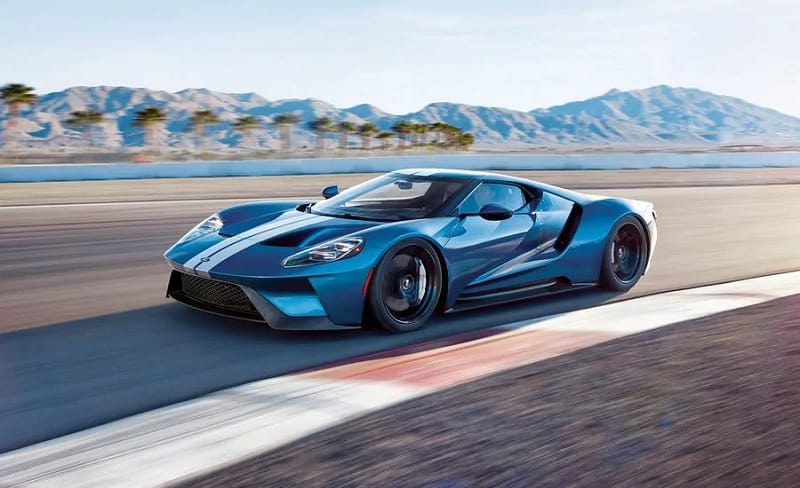 Don’t be fooled, the GT ’s twin-turbo 3.5-liter V-6 is a lean racing machine that, when paired with its Ricardo six-speed manual transmission, churns out a whopping 647 horsepower, 3-second 0-60 time, and a top speed over 200 miles per hour.

The 1963 Corvette Stingray Split-Window Coupe is one of the frontrunners for the most beautiful American sports cars ever made. Its elegant design and trademark split rear window was the topping on the Stingrays impressive history. 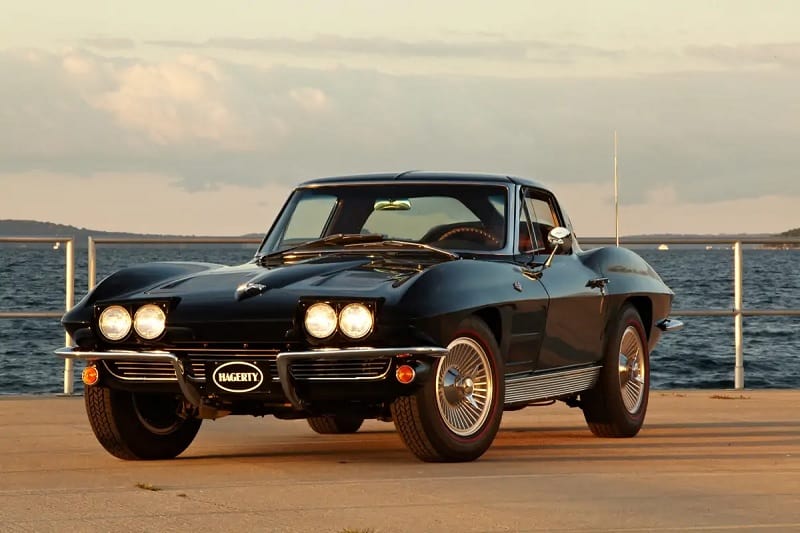 Chevy gave the 1963 Corvette Stingray the designation ZO6, which the car quickly turned into an American sports car legend. The aptly named Stingray rolled off the floor fuel-injected and pushing 360 horsepower with optional three and four-speed transmissions.

The Cadillac CTS-V is the only Cadillac here and it’s easy to see why. Cadillac pulled the supercharged, 6.2-liter engine out of the Chevy Corvette ZR-1 and dropped it under the hood of the CTS-V to take the luxury vehicle from the valet line to the race track. 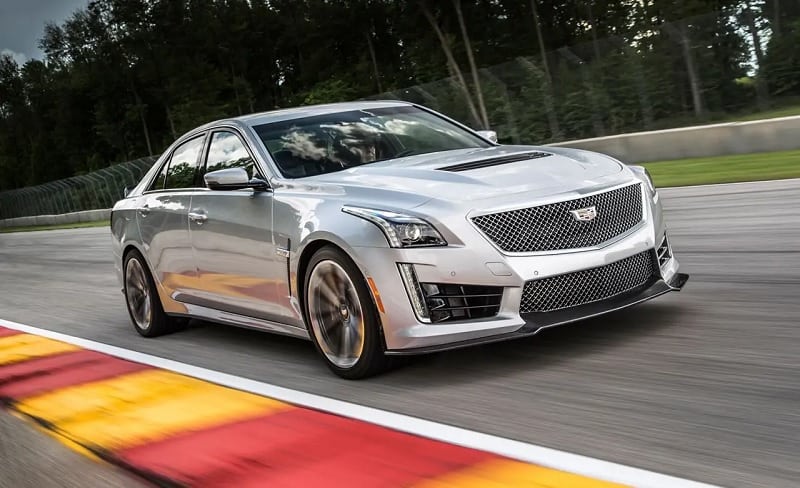 The Cadillac CTS-V’s 0-60 numbers are impressive for a luxury vehicle at 3.8 seconds and with a top speed of over 200 miles per hour.

The Cadillac CTS-V comes with a six-speed manual Tremec T56 transmission and a supercharged OHV 6.2L LSA V-8. The CTS-V earns a spot on the best American sports cars list because of its elegant pairing of luxury, power and sheer aggressiveness.

There are two Camaros on the list of best American sports cars because you don’t often think of a Camaro outpacing a Porsche, but that is precisely what the Chevrolet Camaro ZL1 1LE was able to accomplish at the Nordschleife race track in Nürburg, Germany. 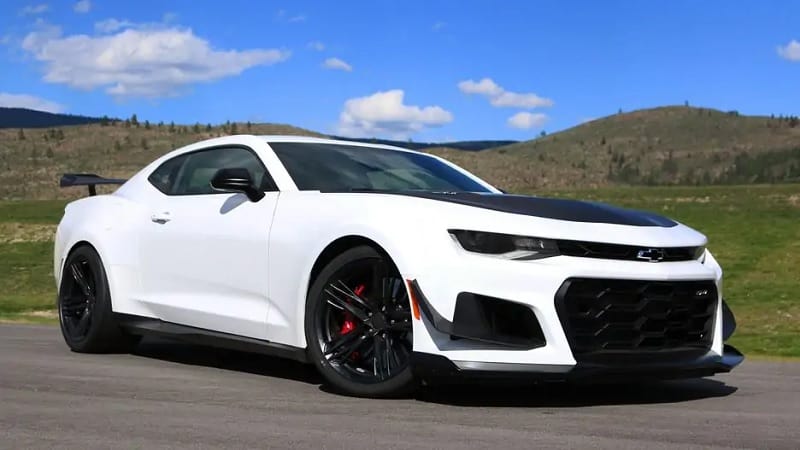 The Camaro ZL1 1 LE’s 6.2-liter supercharged V-8 and Tremec MH3 six-speed manual transmission beat out the Porsche 911 GT2 RS with over 650 horsepower and 650 lb-ft of torque.

Chevy aimed for nothing less than stripped-down American racing muscle when they designed the ZL1 1LE with hardly any creature comforts. Seriously though, who needs daytime running lights when you can go 0-60 in 3.6 seconds?

The factors that propelled these American sports cars onto the list included performance, sale numbers, and the size of the space the sports car takes up in the hearts and minds of Americans everywhere.

The performance vehicles included on this list by no means encompasses all of the engineering marvels and high-speed machines that the U.S. has produced over the years.

However, regardless of age or era, Americans appear to agree that the fifteen American sports cars included here are the ultimate best.

The answer to that question is a matter of opinion, but when comparing European sports cars to the sheer amount of horsepower, torque and raw power offered by most American sports cars the answer is an engine roaring “yes.”

Are there any four-door American sports cars?

Yes. Depending on your definition of sports car there are numerous four-door performance vehicles manufactured by American companies. However, by our definition, the Dodge Charger SRT Hellcat, Tesla Model S, and the Cadillac CTS-V are all incredibly impressive machines that are offered in four-door models

What are the fastest American sports cars?

Are there any American sports cars that are right-hand drive?

There are none that are made stock in the U.S., but right-hand-drive conversion kits are available for purchase. However, if you are looking for a right-hand-drive American sports car off the factory floor, you may need to head to the U.K. or Australia in order to find one.

Is it possible to find “cheap” American sports cars?

There are also thousands of American sports cars and muscle cars in various states of repair that, depending on your mechanical skills, can be refurbished and repaired to their former glory.

While classic cars have a ton of personality and style, they have one huge drawback: safety. They weren’t generally safe for their own time, and as time has gone on they safety ratings used by manufacturers have only gotten more strict.

Going with a more modern car will always be safer. It’s an unfortunate truth that many of us who love classic sports cars would rather ignore, but there is plenty of evidence to support it.

I am a Chicago-born writer with a thirst for everything automotive. I live by a simple rule; travel far, work hard and never stop writing. If I am not writing away, you can find me wrenching on my 1989 Ram Charger or wrecking something with wheels.