You could spend $1,000 on a fancy pair of shoes – or you could buy a sweet ride. Well, for under a grand, it may not be that sweet, but it will be more fun than throwing your back out in a new pair of Yves Saint Laurent heels. Finding a decent ride on the cheap can be tricky, but it’s doable. So before we get into ranking our favorite cheap rides, how do you find them, and what should you look out for?

Cars are expensive – even a basic ride can saddle you with a hefty monthly payment. Wouldn’t you like to beat the system and score a cheap vehicle? Finding decent transportation for under $1000 isn’t easy, but it can be done. You just need a little ingenuity – that, and low standards. The cars you pick up for under a grand aren’t going to win any beauty pageants, but they will get you from point A to point B. New Ford Focus? Not a chance. How about a fancy Jeep Grand Cherokee? Yeah, good luck with that. A Chevrolet Malibu? Probably not. An old Chevrolet Cavalier? Now that’s more like it! Keep an open mind when you’re hitting the auto sales sites and used car lots. Bargains can be had providing that you lower your standards accordingly. Who wouldn’t want a 1995 Jeep Wrangler or a 2001 Ford Taurus anyway? 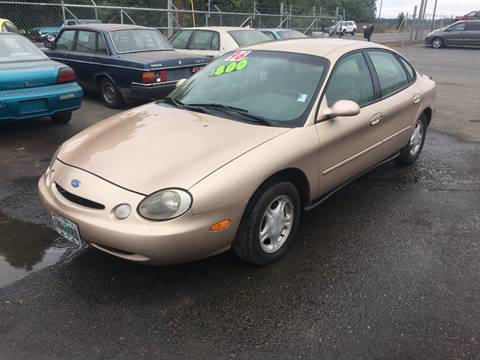 How do you find cars for sale for such a low figure? Whether you’re shopping for a new shirt or a new mate, online is the place to look; cars are no exception. Many classified websites have an auto section. The key to narrowing down your search is simply to select a price limit of under $1000. Some websites will have a drop-down menu for this, while others require you to manually type it in a search box.

If you’re handy, you may also want to check out the “non-running parts car” section of the website. Or, you can type in the keywords “mechanic’s special.” Both tactics have been known to uncover automotive gold.

Once you’ve got the search criteria dialed in, your computer screen should begin to populate with dirt-cheap hoopties. 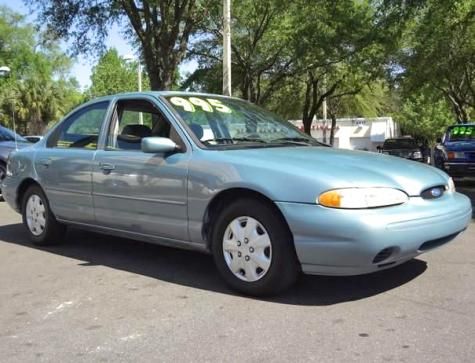 Any car with a price tag below $1000 is going to be hideous. Period. Expect peeling paint and rust spots. You can also expect certain things not to work, or be completely M.I.A. For example, a cheapo car may be missing the radio, or have a passenger side window that won’t roll down. All inconveniences you can live with – or you’ll have to learn to live with – driving a cut-rate car. Alloy wheels, keyless entry, and an Aston Martin badge aren’t going to be part of the deal.

Also, expect to get a little dirt under your nails. Cars for under $1000 are going to need work here and there. But this can be a good thing – repairs can be a bonding experience between you and your clunker. As long as it runs and the steering wheel faces the right way, you can get on fine. 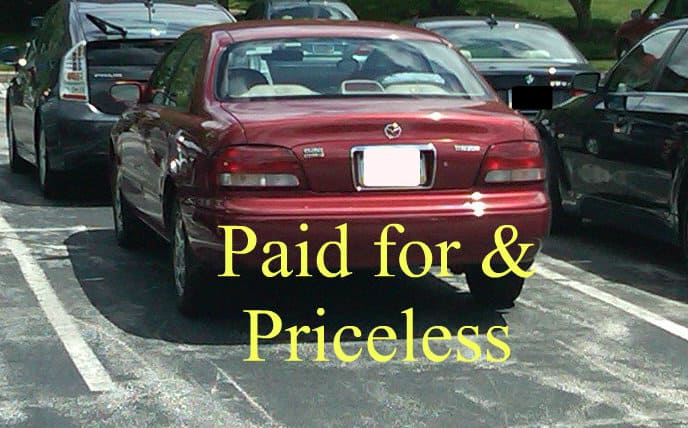 Most cars under $1000 are junk, plain and simple. Be prepared to kiss a lot of toads (or in this case, take a lot of test drives) before you find your prince. They are cheap used cars after all, so don’t expect some gorgeous Alfa Romeo new car to turn up in your local car listings – and if one does turn up, then ask why, because it’s too good a deal to be true. Take your time searching for the right one. If the first, fifth or twentieth car doesn’t work out, don’t give up. The beater car market is always replenishing. Eventually, you’ll find the rust bucket of your dreams (or nightmares).

What to Look for

If you’re going to venture into junker land, you need to know what to look for and what to avoid. The world of cheap used cars turns up some interesting search results, so keep your eyes open for the best deals. In short, cheap cars under $1000 that still run, don’t leak anything, have some tread on left on the tires, come with full history and don’t look like they’ve been crashed are worthy car deals. But do your car research first anyway. Here are a few key things to look out for.

Owning a cheap car isn’t just a choice, it’s a lifestyle. While others are falling victim to consumerism, you’re sticking it to the man. And that’s something to be proud of. Besides, a car prices go, anything that runs for under a grand is an epic win.

So without further ado, these are the best cars for sale under 1000 dollars. 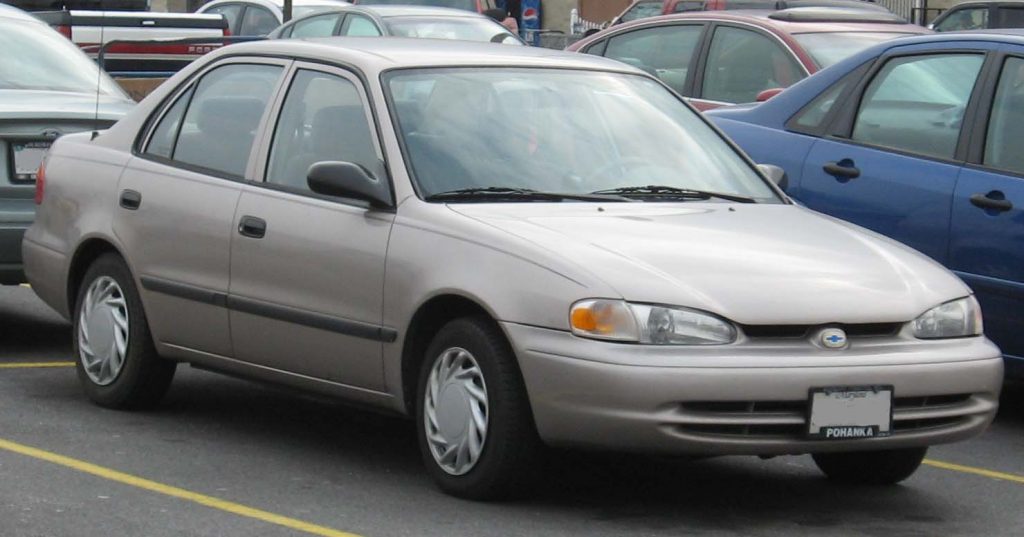 The unwavering dependability of Toyota cars makes them extremely desirable. Because of this, they usually exceed the $1,000 price limit. That’s why the Geo Prizm is a well-kept secret – it’s a Toyota in Geo clothing. The Geo Prizm – and it’s fraternal twin the Chevy Prizm – were created as part of a joint venture between GM and Toyota. Third generation models pack Toyota’s venerable 1.8L four-cylinder, along with an optional 5-speed manual. Sure, the Geo Prizm is boring – it blends into any parking lot like beige-colored chameleon. But it’s reliable enough to last you half a million miles. There aren’t many cheap cars for sale under $1000 that are better than this deal. 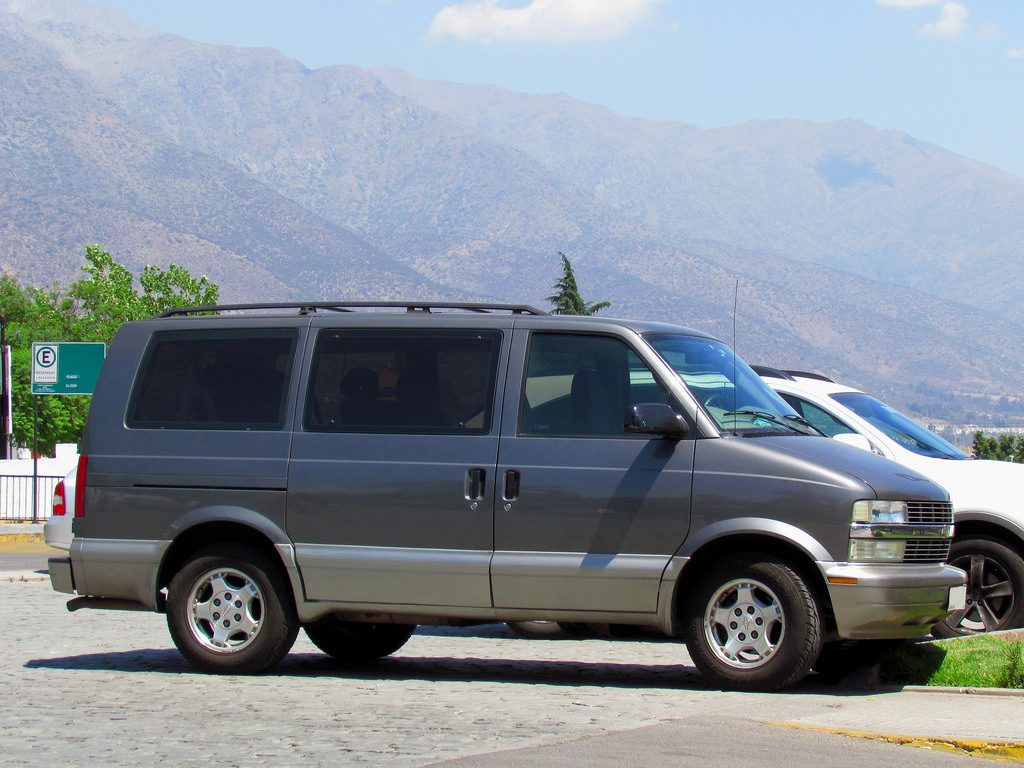 This one is for the hipsters looking for a tiny home. Remove the rear seats from an Astro van and voilà – you have an abode on wheels. A quick Google search returns tons of examples of Chevrolet Astro vans that have been fitted with beds, skylights and anything else you’d want in a living quarters. Best of all, the Astro – and its doppelganger the GMC Safari – can be had with all-wheel drive. And, because they’re so ugly, you can pick one up for under a grand.

Cops doesn’t use Crown Vics anymore, but the majority of drivers don’t seem to recognize that. Ford’s old four-door still strikes fear in the heart of many motorists. As a result, traffic parts like the great seas for a Crown Victoria. Very handy for your daily commute. Plus, the big Fords pack a powerful V8 engines and rear wheel drive, making them a blast to drive. 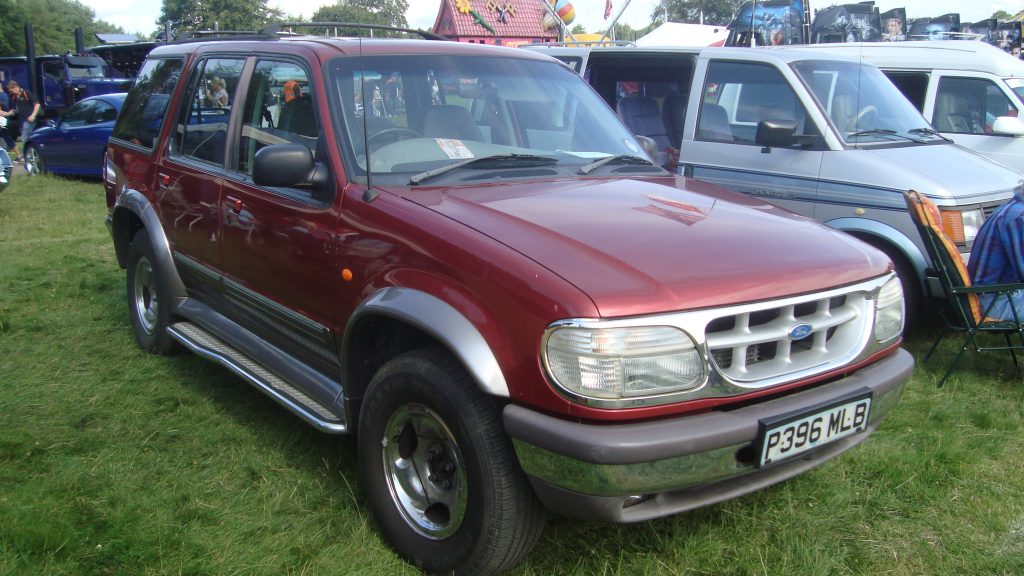 Many people refer to it as an Exploder rather than Explorer, but Ford’s midsize SUV has a lot going for it. First and foremost is its price. Other than the Explorer, there aren’t many four-wheel drive SUVs you can get for under $1,000. But the bottom line isn’t the only great thing about the second generation Exploder (err, Explorer). These rigs were offered with the 4.0L V6 engine, which is very stout. They also came with options like leather seating and power accessories, so you can traverse the backroads in style and comfort. It’s easily one of the best SUVs for sale in this price range. 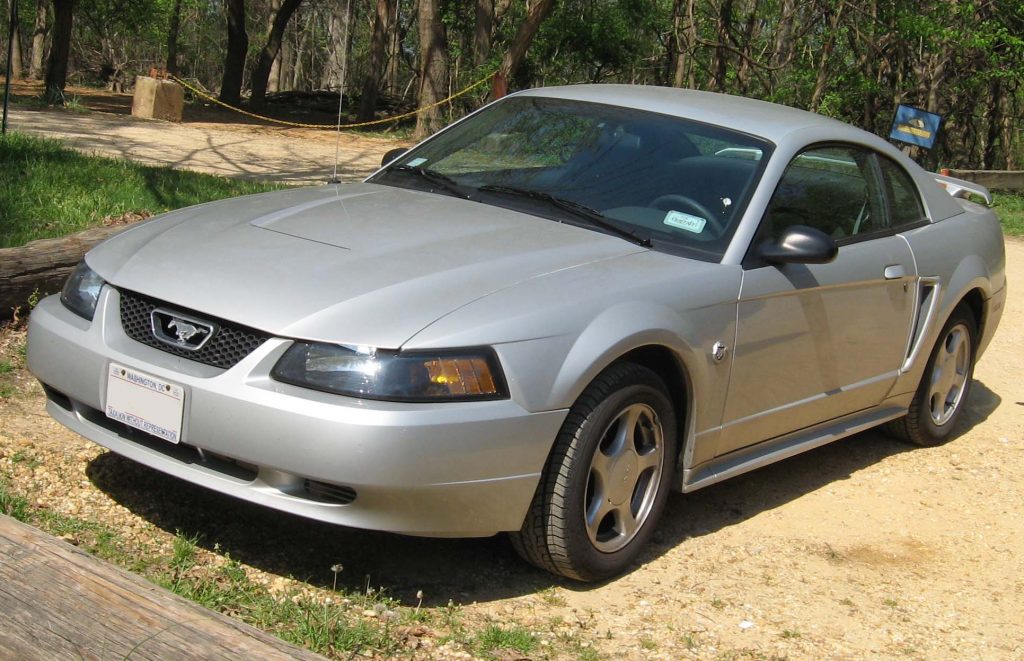 No cheap car can turn heads like a Ford Mustang. For under $1,000, you’ll have to settle for the V6 model. But that doesn’t mean you can’t have fun in an inexpensive pony. Fourth generation models were equipped with a 3.8L V6 cranking out up to 190 hp – not bad for the early 2000s. If you look hard enough, you may even be able to find a convertible model for fun in the sun.

It may look like a jelly bean on wheels, but the third generation Cavalier Z24 is pretty cool. As you probably guess, Z24 is the performance model (and we use the term “performance” loosely). It’s equipped with 2.4L four-cylinder engine putting out 150 hp, along with a sport-tuned suspension. And, of course, you can forget that epic Z24-specific body ground effects. All jokes aside, the third generation Z24 is perky and fun to drive. It’s easy to find one for under $1,000 because, well, it’s a Cavalier. 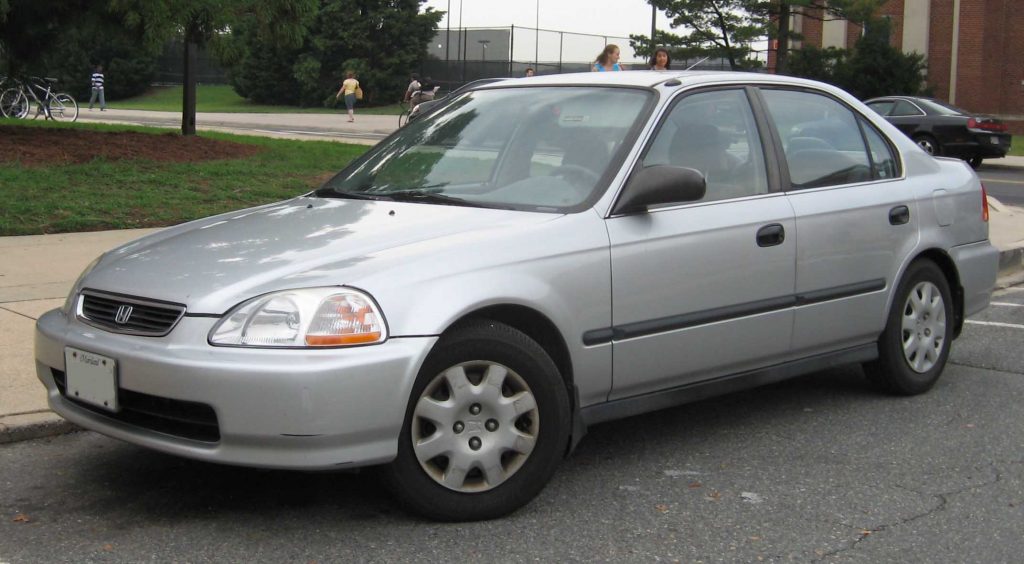 Build the rice rocker of your dreams, starting with a beater Honda Civic. For less than a grand, most of the Civics you’ll find need some work – or have upwards of 300,000 miles on the clock. But if you really dig, you can find one that’s halfway decent. All sixth generation Civics came with a reliable 1.6L four-cylinder that’s easy to hop up. For less than $1,000, you can be the next Paul Walker. The Civic is easily one of the best cars under $1000 out there. 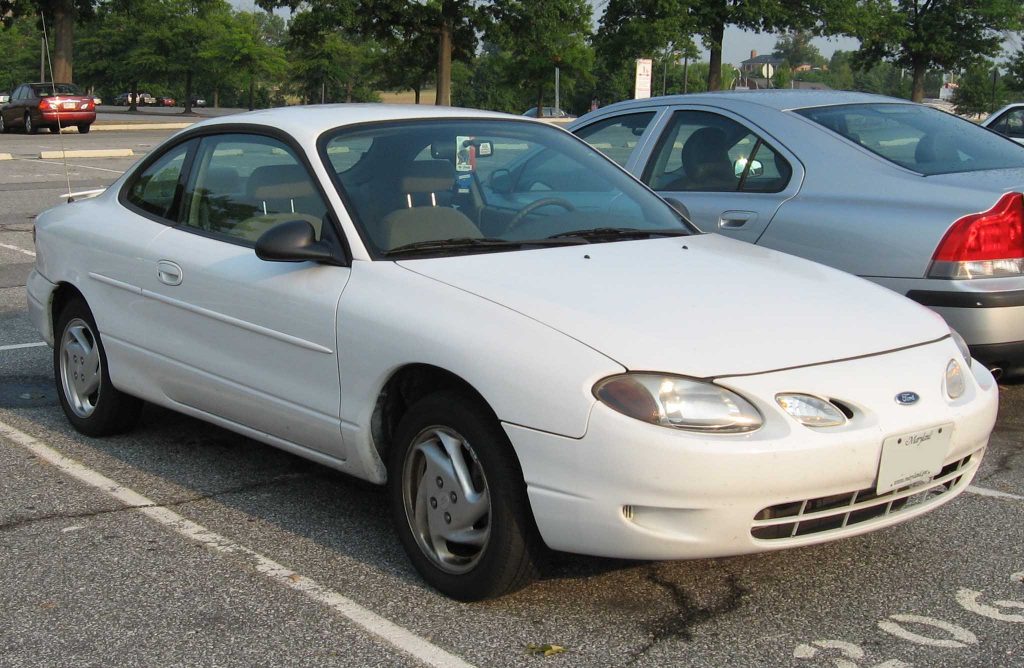 The Escort ZX2 is Ford’s response to the Cavalier Z24. Powered by a 2.0L four-cylinder, the ZX2 is just as fun as its Chevrolet rival. Equipped with the 5-speed manual transmission, the Escort provides a spirited driving experience. Just don’t tell anyone at your next dinner party that you drive an Escort. You will never live it down. 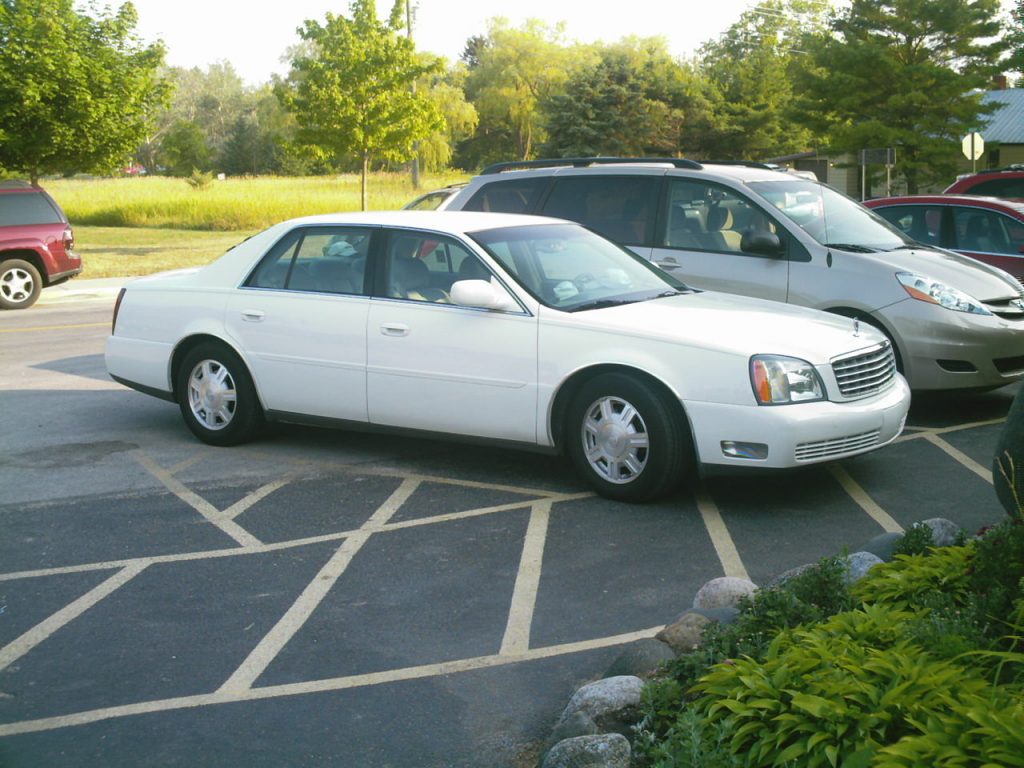 Where else can you get V8 power and buttery leather for less than $1,000? Although it’s Northstar engine is known for being problematic, the eighth generation de Ville is a fine ride. The top-of-the-line model puts out around 300 hp, which is enough to make the land yacht seem semi-fast. What really sells the Cadillac de Ville though, is the way it floats down the road – it feels like you’re driving a water bed. 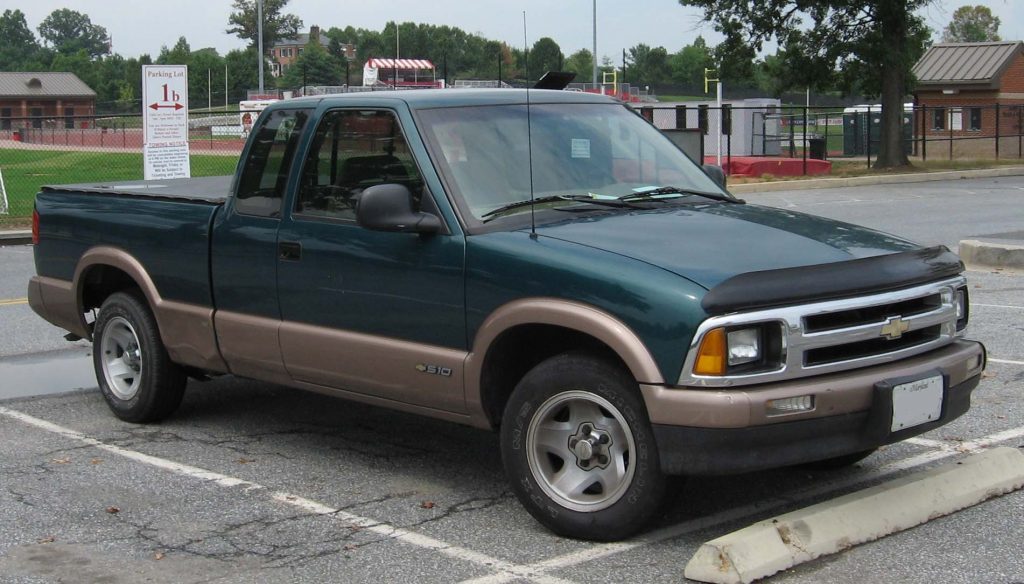 Trucks are great to have around – at least until your buddy needs help moving. Seriously though, there’s a lot you can do with a cheap truck, like a Chevy S-10. You can haul car parts, tailgate at a ball game. And if you score a four-wheel drive model, you can venture off-road. The second generation S-10 has what you need to get the job done, including an optional 4.3L V6 engine and available four-wheel drive.

The 1990s and early 2000s are prime real estate for the best cars under $1000. These rides aren’t new enough to be completely reliable and they’re not old enough to be classics. If you’re looking for basic transportation – or vehicle for the 24 Hours of Lemons – hop on Craigslist and see what you can find. From New York to Los Angeles, there are plenty of bargains out there waiting to be snapped up.