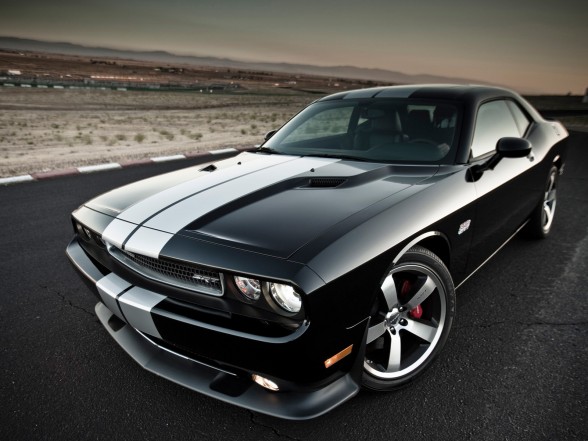 So the Dodge Challenger is getting left behind as news of nothing but Shelby GT500’s and Camaro ZL1’s make the news and envy of the modern muscle world. So with the need to boost sales with a Halo car, Dodge is going to give the top dog a little dose of forced induction goodness. The current Challenger SRT8 boasts a smile inducing 470 hp from its 392 cubic inch Hemi monster. But with superchargers getting slapped on the competition it seems that these Mopars are next in line. We have seen the 6.1 L easily get 600 hp from tuners so it should be no surprise to see 580-600hp from this vehicle making it’s debut in the horsepower shootout.

I drove a 6.1 L with a twin-screw supercharger and it sounded like Satan’s baby pooped its diapers. It was an eerie whine that made the hairs stands up on the back of your neck. I F*****G loved it! It was like the siren of an air raid about to commence and I would hate to hear that coming after me. The vehicle was producing 630 hp at the crank and was able to launch the car but it still felt like a cruise ship and was certainly not neck snapping acceleration. The problem was that the damn supercharger sounded so awesome that I just kept punching it just to hear it and then I was quickly putting $40 in gas in the car. The problem with this 2013 Dodge Challenger SRT8 is that it will not be faster around a track then the GT500 or ZL1 unless some major work is done, which I doubt.

What is interesting is that I don’t care if it is not as fast around a track because I am in love with all of these cars and am not buying one with a track life in mind. I want a car that makes me smile like a simpleton every time I get behind the wheel. Plus an added bonus is that I get to grow a wicked porn mustache because I will be back in a Mopar. As for the 2013 Dodge Challenger SRT8 Supercharged Hemi monster I can’t wait to see it. Hopefully Dodge won’t do anything stupid and make this only available on a select few Mopar editions. Bring the power to the people and give other owners a chance to supercharge their rides. As for the cost of the SRT8-SC, expect $50,000.