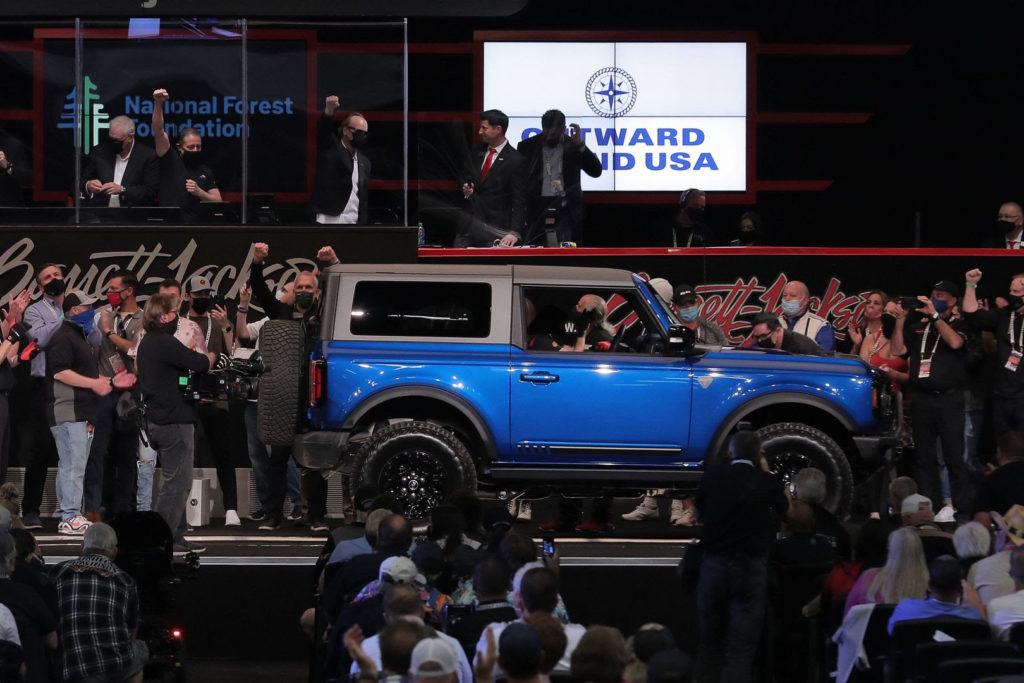 Buying a car with VIN 001 means something to many collectors. As the saying goes, there is only one number one and everybody else comes in second. Car collectors spent some BIG coin at the Barrett-Jackson auction in Scottsdale, AZ for the first 2021 Ford Bronco and the first 2021 Ford Mustang Mach 1. Both vehicles bear serial number 001 in their VIN (Vehicle Identification Number).

There is something magical about being first. The successful bidders of these two iconic vehicle returns have major blue oval bragging rights. The good news gets better when you realize that all the proceeds will go to three designated charities.

Over the years the Barrett-Jackson auction has cultivated the opportunity to buy serial number one of several makes.  Barrett-Jackson does not charge a commission on these sales, so 100% of the selling price goes straight to the charities. Frequently these “charity cars” will be some of the highest-priced cars sold at the auction. Barrett-Jackson has raised over $120 million for charities with these cars over the years.

Steve Davis, Barrett-Jackson’s president, stated; “We couldn’t be prouder to work with Ford on the sale of these two legendary vehicles. Not only will they make history as VIN 001s, but their sales will drive change through the charities they benefit for years to come.” 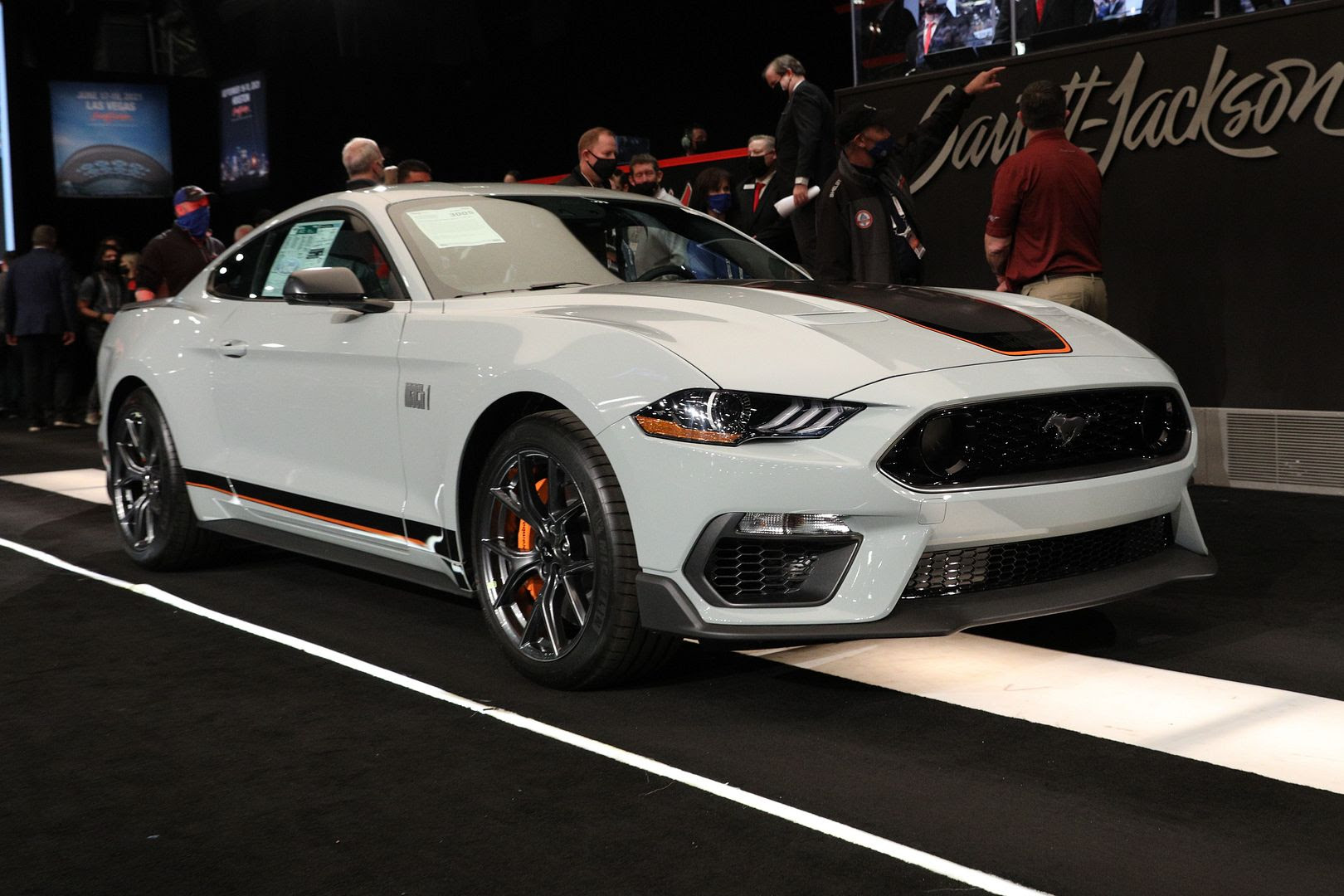 The 2021 Mustang Mach 1 comes back on the market after not being offered by Ford for 17-years. The actual car has not yet been built, and sometimes Ford executives will allow the new owner some leeway with ordering the car as they desire. But the first Mach 1 is slated to come in their exclusive Fighter Jet Gray color. The V-8 engine will offer up 480 hp and will be matched up to a 6-speed TREMEC manual transmission.

It also will include the Mustang‘s track “Handling Package”.  The new Mach 1 Mustang has been coveted by auto enthusiasts and comes with special wheels, badging, and a unique front fascia. The proceeds from this car will benefit the Juvenile Diabetes Research Foundation which seeks to cure, prevent and treat type 1 diabetes and its complications.

The first Mustang Mach 1 came out in 1969 and was an immediate champion, winning races across the country.   It was designed as a track-ready pony car, only offered in the fastback model, came with a hood scoop, and had upgraded suspension. The last, fourth-generation, Mach 1 Mustang ended production in 2004.

The 2021 Mustang Mach 1 will borrow some parts from the Shelby GT350 lineage including the intake manifold, front, and rear subframes, and the oil cooler. The transmission will feature “rev-matching” for smooth shifts and a twin-disc clutch. That Mustang “Handling Package” includes front-wheel lip moldings, a magnetic swing spoiler, and rear tire spats.

Jim Farley, Ford’s COO says “this is one of those special Mustangs that truly brings a smile to the faces of our owners, enthusiasts, and fans – including me.” 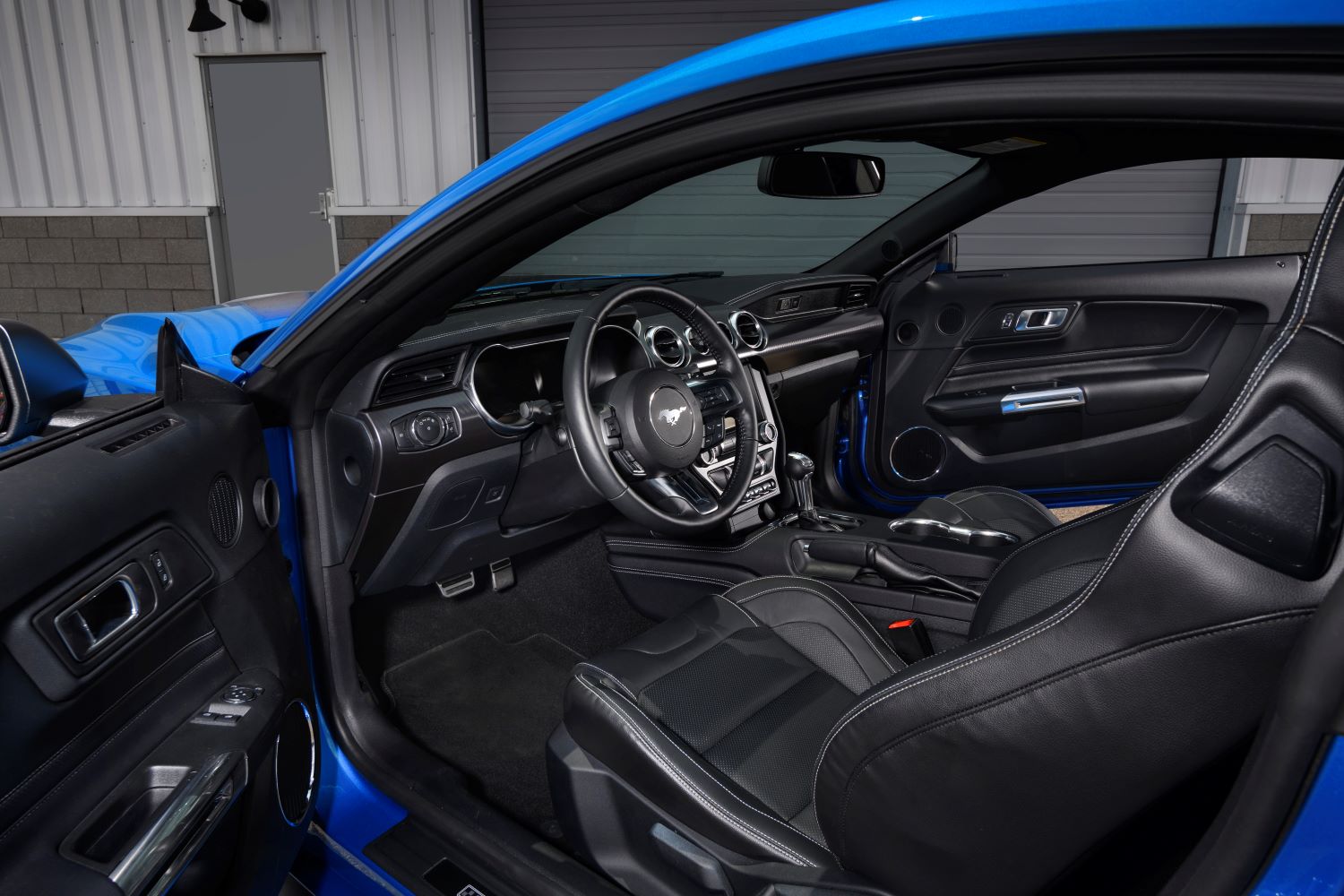 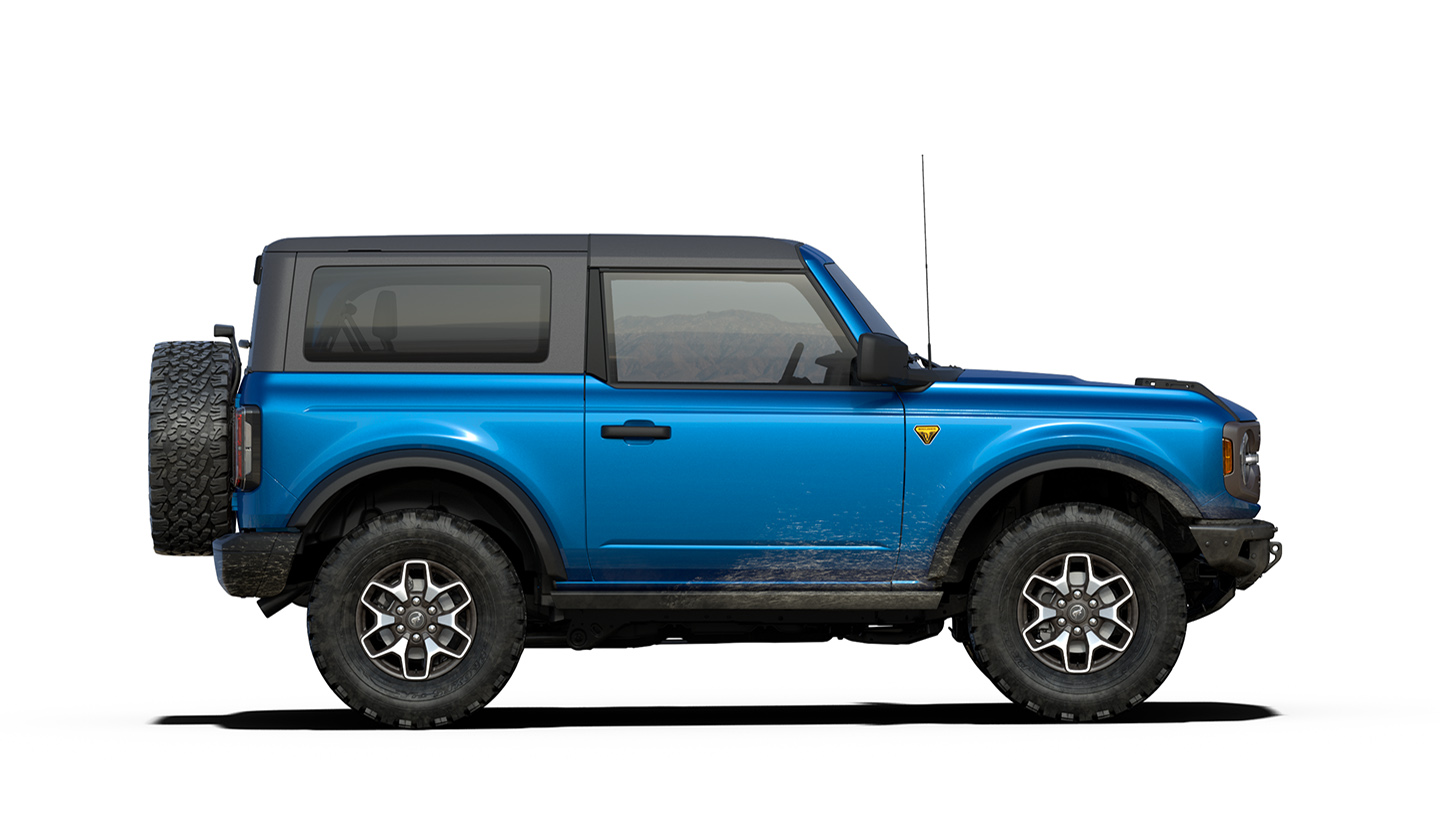 Crossing the Barrett-Jackson auction block will be the first of 7,000 First Edition 2021 Ford Broncos. It is finished in Lightning Blue and includes both the Ford Badlands Series and the Sasquatch Package of options. The Bronco will be powered with Ford’s durable 2.7L EcoBoost V6 with a ground chewing 310 hp and 400 lb.-ft. of torque. Ford loaded this up with their HOSS (High Performance, Off-Road, Stability, Suspension) System which includes front and rear locking axles and independent front suspension.

The modular hardtop is painted black and comes with removable doors and a Safari bar along with the exclusive Limited Edition badging. The First Edition Bronco has been so popular that all available reservations for this model have been filled already.

The funds from this sale go to National Forest Foundation and Outward Bound, which is fitting since this is an off-road-ready Bronco after all.

The Sasquatch Package includes 35-inch tires for over 11-inches of ground clearance, while the Badlands offerings include all the goodies for all-terrain adventures; including everything from 360-degree cameras, a 110-volt power outlet, heated seats, and dual-zone air conditioning.

The 2-door Bronco Limited Edition starts at $57,410 MSRP. This one has been optioned considerably higher, and of course, sold for a LOT more because of its VIN and charity ties. The VIN 001 Bronco sold for a truly impressive $1,075,000. 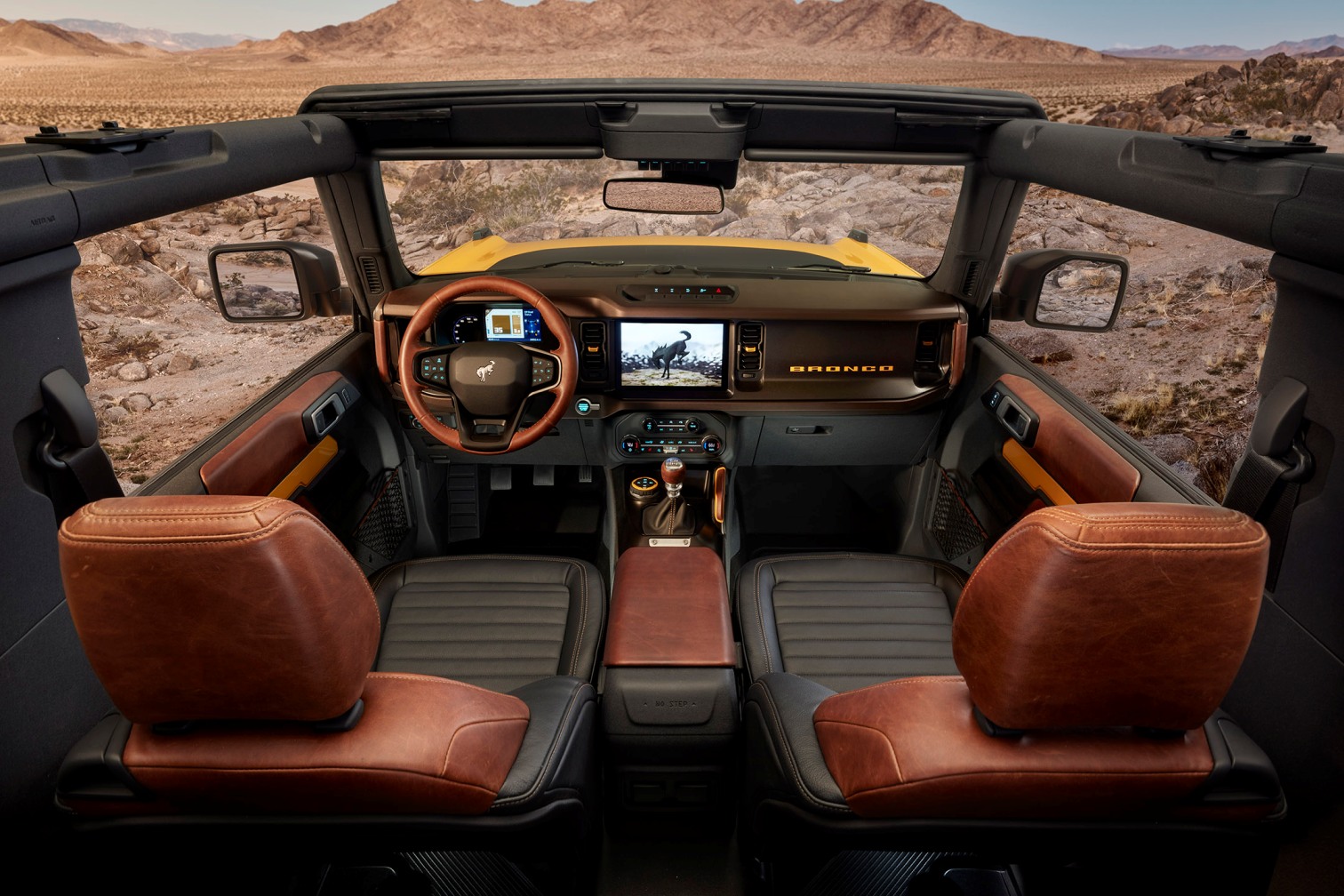 The Barrett-Jackson auction was held March 20-27, 2021 in Scottsdale, Arizona.

“I’m really excited about both of these reborn icons selling on our auction block and, since I own a vintage Bronco myself, am particularly interested to see what VIN 001 of the new model will bring,” said Craig Jackson, Barrett-Jackson chairman and CEO.

We are excited too, and it is great to see the proceeds from these two very special iconic vehicles going to deserving charities. In total the 2021 Barrett-Jackson Scottsdale Auction brought in $5.8 Million for charities, lead by the $2.5 Million sale price of the very first 2022 Hummer EV Edition 1.


Kia Trail’ster Concept Is All The Soul You Ever Wanted
Is Ford building a secret Mid-Engine Mustang to compete with...
5 Of The Toughest Russian Off-Road Vehicles You Never Heard ...
The Top 10 Best Sport Trucks
Ranking The Most Expensive Cars to Insure
Ford Focus RS vs. Honda Civic Type R vs. Subaru WRX STI