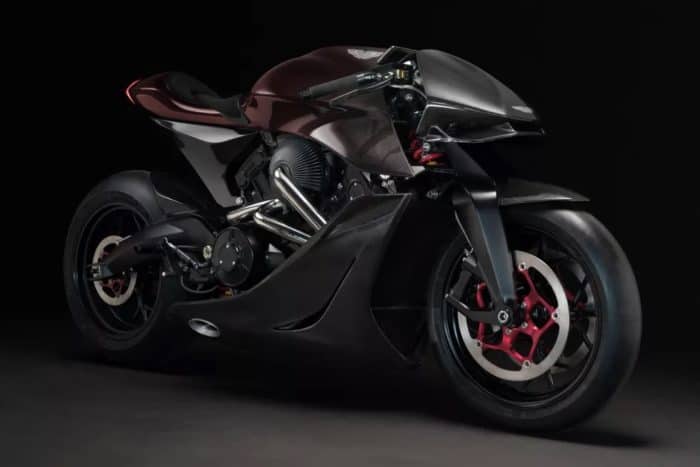 Two iconic British marques have teamed up to create the gorgeous limited production track-only Aston Martin AMB 001 motorcycle. Both its turbocharged engine and hefty price tag might blow your socks off.

In 2019, Aston Martin and Brough Superior announced plans to collaborate on a special motorcycle project. Fusing Brough Superiors’ two-wheeled history with Aston Martin’s iconic sports car heritage was no mean feat. However, the designers have managed to pull it off. This amazing creation was shown testing out on the track in early 2020, and is finally going to be built in the fall. 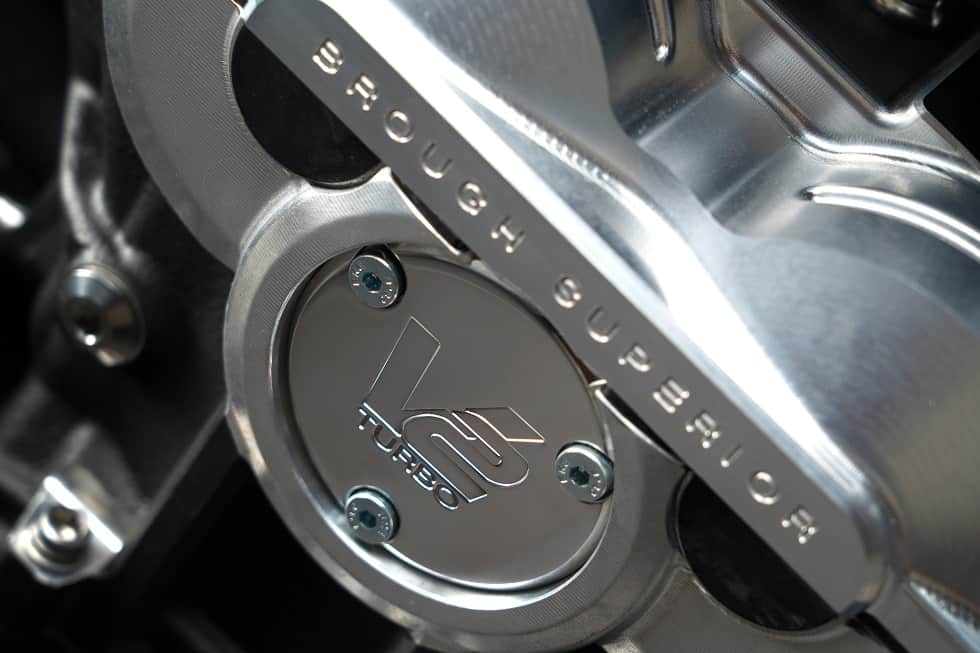 The headline-grabbing turbocharged powerplant is a 997cc V-twin unit. While the idea of an Aston Martin/Brough Superior turbo sounds outrageous, the actual result isn’t as mind-blowing as you’d hope. Despite being the first Brough to feature turbocharging technology, the final power output is a little disappointing.

In fact, the Aston Martin AMB 001 only produces 180 horses. Granted, that’s more than enough for most riders. However, considering that we’re in a post-gentleman’s agreement era, it’s not as high as it could be.

But horsepower isn’t everything. The turbocharger delivers responsive power, massive torque, and a wide spread of power where and when you need it. 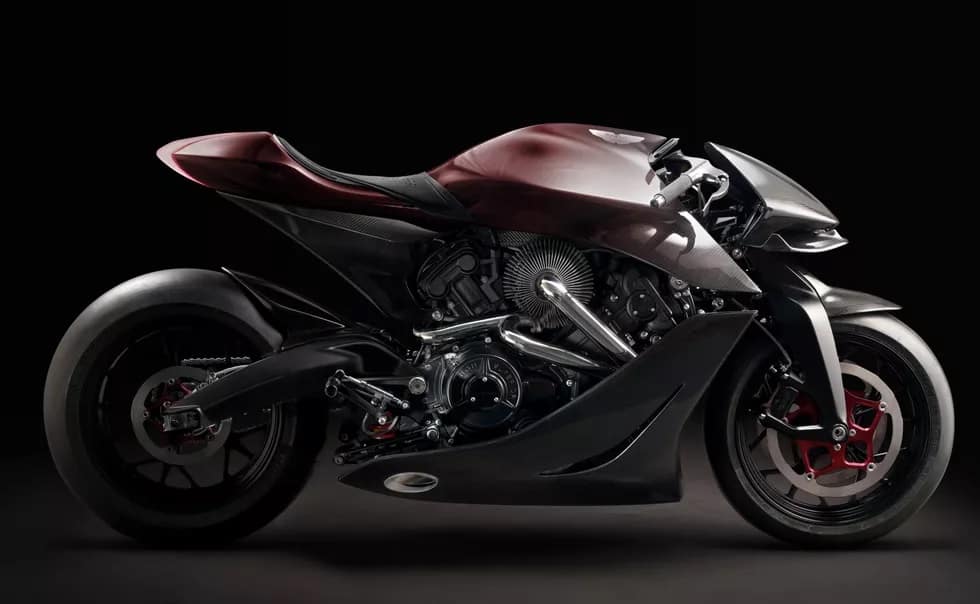 A carbon fiber frame holds the engine in place, with titanium supports and a whole host of top-shelf machined components.

One of the most exciting components is the bike’s billet aluminum machined double-wishbone fork. It provides superior steering and handling capabilities than standard arrangements, plus it looks cool too.

At the rear, the Aston Martin AMB 001 boasts an exclusive CNC machined swingarm, which works with a special damping system, rocker hinges, and the rear shock to deliver precise damping for superior control. 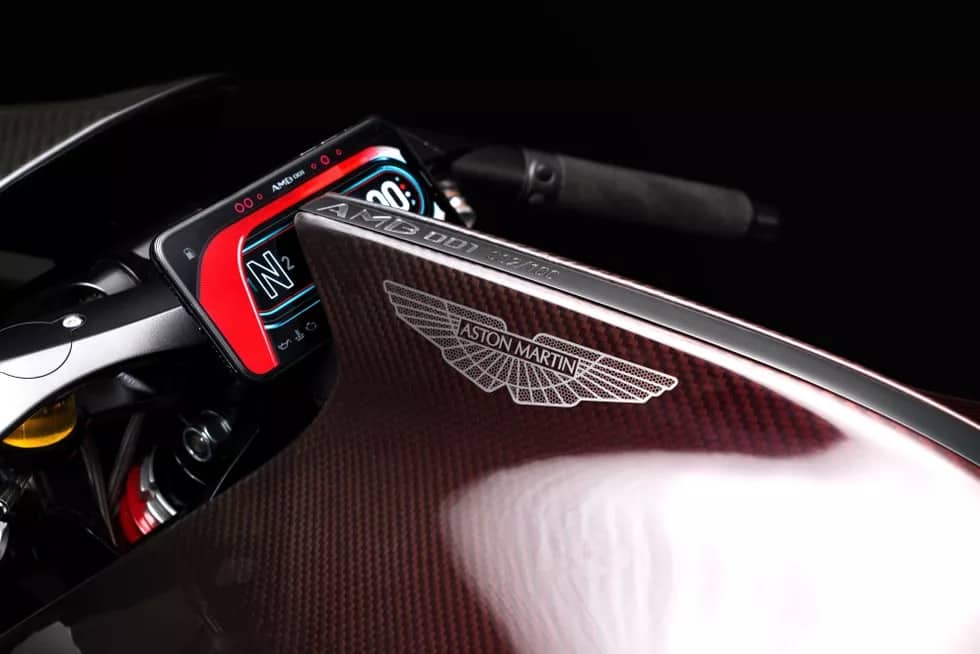 No amount of power, aerospace material, or raw horsepower will be enough to compliment the AMB 001’s futuristic look. It takes design cues from similar future-focused machines that we’ve seen in the past, but the AMB 001 is unmistakeably Aston Martin.

The body features the same sculptural elements that have helped define the Aston brand over the decades. For example, the side strake usually found on Aston Martin’s four-wheel vehicles has been faithfully recreated as a part of the AMB 001’s gas tank. Now it sits atop the motorcycle, extending all the way back to the bike’s tailpiece and tail light.

Almost all of the bike’s bodywork features carbon fiber and laser-cut metal. The only aesthetic elements made from other materials include the hand-stitched Oxford Tan leather saddle and the handlebar grips which have been crafted from automotive leather.

Finished in iconic Aston Martin Stirling Green, there’s no denying that this Brough Superior collaboration is nothing short of high art. However, it’s unlikely to impress many serious riders on the track. 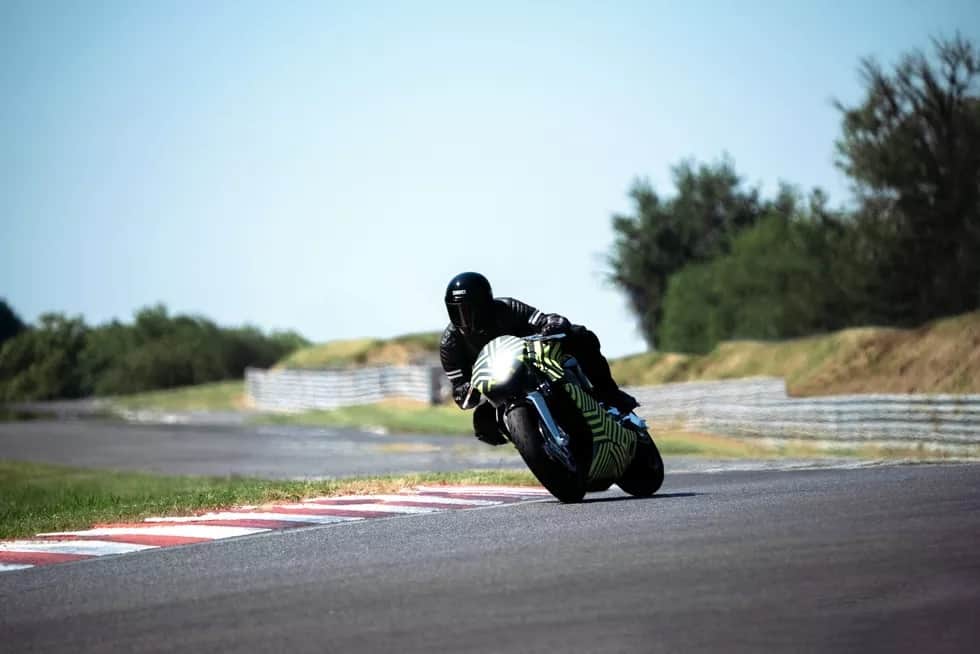 Despite using premium materials and featuring some of the most advanced technology in the business, this Aston Martin and Brough Superior mash-up has two very uninspiring features. The first is the price. The second is availability.

The asking price for the AMB 001 is a heady $122,000. And the availability? Only 100 AMB 001 motorcycles will ever be built. With that kind of exclusivity, this track-only beauty is too expensive and too rare for many riders to dare throw around a track. It’s a shame, but the reality is that most of these will end up in mostly static private collections. Sadly never to be ridden with aggression.

Production of this stunning motorcycle will begin in Fall 2020. And while these limited-edition models are likely to become expensive paperweights, they could be leading the way for future collaborations between the two iconic brands. This limited run of exquisite machines may even light the way for Brough Superior to once again return to the foreground. Perhaps.