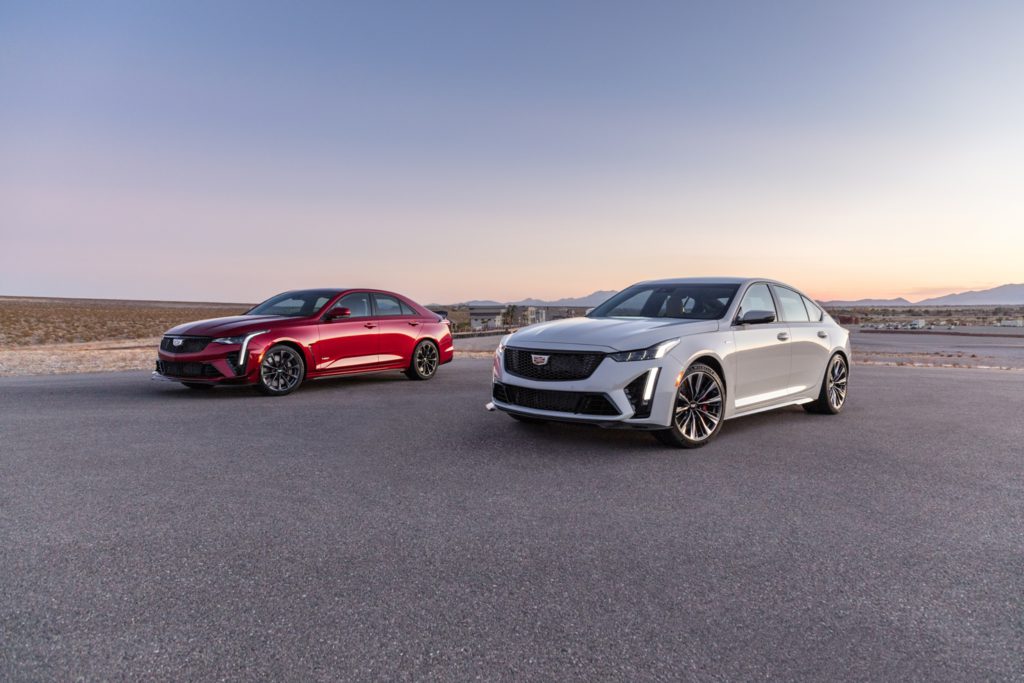 The 2022 Cadillac Blackwings offer track performance with a touch of luxury.

Cadillac promised a performance upgrade to their CT5-V and CT4-V models and teased about it during the 24 Hours of Daytona coverage. It delivered with a one-two powerful punch as they premiered the two 2022 Cadillac Blackwing models today for an early Valentine’s gift.

Don’t get us wrong, the 2020 CT5-V and CT4-V options were pretty powerful choices for an auto enthusiast. The V-Series was the top end of the Cadillac CT4 and CT5 model range, in terms of performance. With the CT4-V producing 325 hp and 380 lb.-ft. of torque from a 2.7L turbocharged four-banger while the CT5-V came to the party with a twin-turbocharged V6 that offered 360hp and 405 lb.-ft. of torque with a 10-speed automatic. MSRP’s were starting in the $40,000s, but most of these V-Series cars don’t leave the lot for under $60,000 when appropriately optioned.

Cadillac previously labeled their exclusive twin-turbo V8 engine, the Blackwing V8. The engine debuted in the CT6-V sedan and it was the first dual overhead cam Cadillac motor since the venerable Northstar was canceled in 2011. It came with all the performance parts to produce 550 hp. So when the Cadillac Blackwing models were first rumored, you figured Cadillac meant business.

The engine in the Blackwing is a beast. Due to better air intake and exhaust management, the Blackwing 6.2L supercharged V8 gets upgraded to 668 hp and 659 ft.-lb. of torque. The “estimated” performance numbers include a top end speed of over 200 mph, with 0-60 mph at just 3.7-seconds. To slow down this monster, Cadillac engineers spec’d massive Brembo 15⅔-inch front brakes, with optional carbon-ceramic disks for even better braking performance on track. 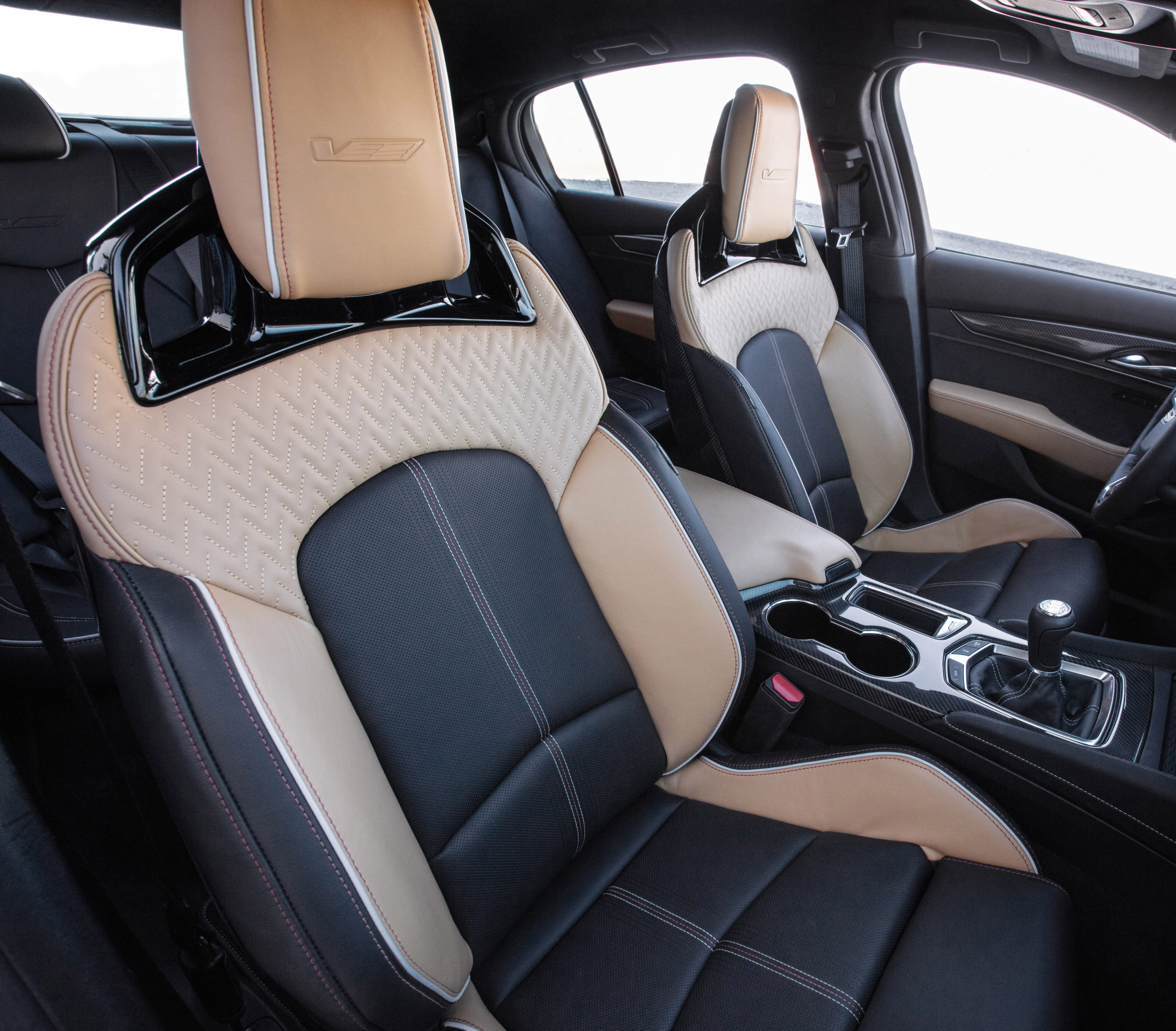 Cadillac built the Blackwing cars for enthusiasts. A prime example is the standard TREMEC 6-speed manual transmission. It offers an “Active Rev Matching” twin-disc clutch with “No-Lift Shift” to keep those twin turbos spooling. On offer is also a 10-speed automatic with paddle shifters and several driving modes for those who prefer only 2-pedals. 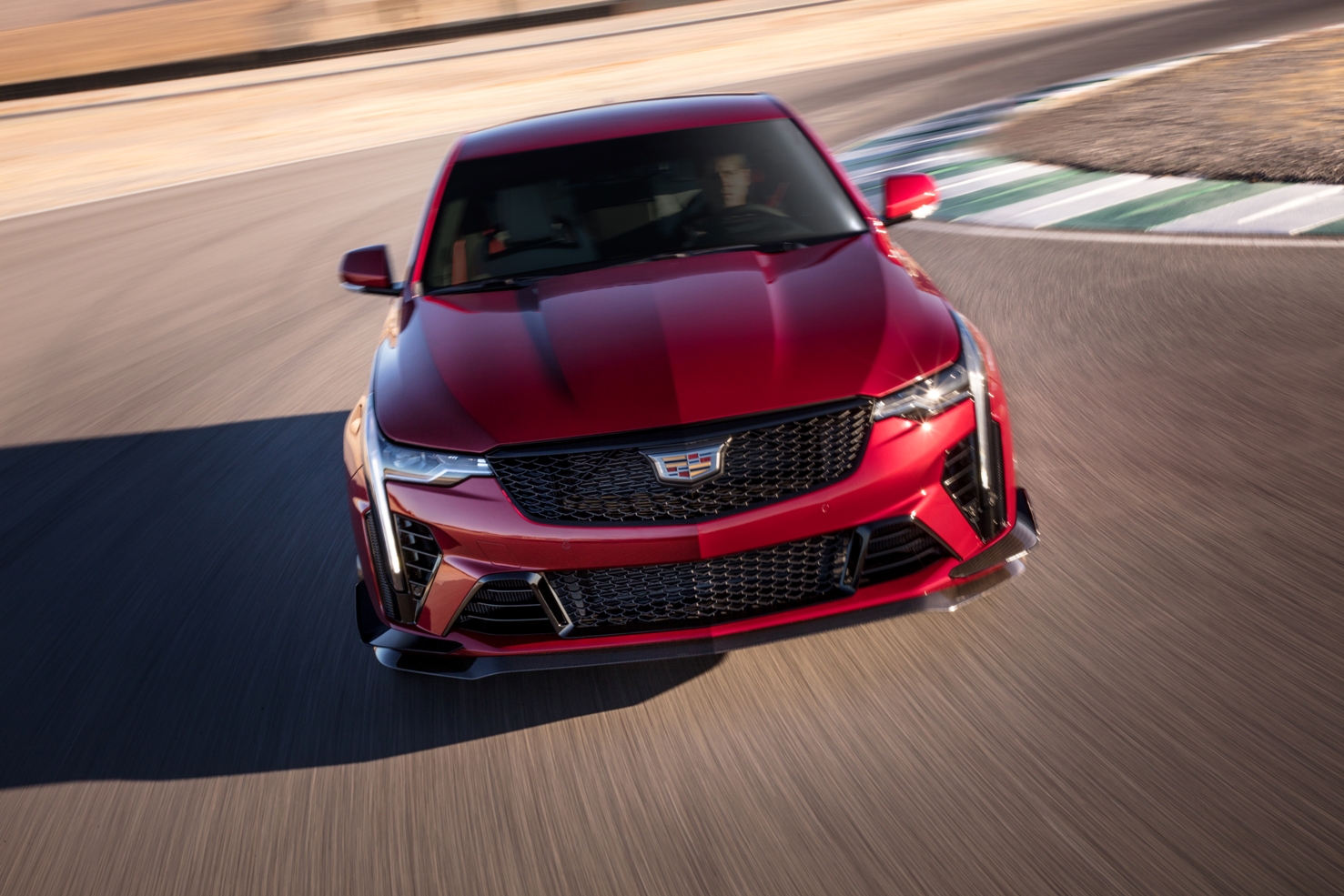 The little brother CT4-V Blackwing packs a similar punch, but the V8 is replaced with a 3.6 liter twin-turbo V6 that delivers 472 hp with 445 ft.-lb. of torque. It goes 0-60 mph in a tick slower, at 3.8 seconds, and comes with slightly smaller Brembo brakes. But that’s probably okay since it weighs less and the top end speed is calculated to be a bit slower as well, at 189 MPH.

The CT4-V Blackwing offers the same choices in transmissions, with 3-pedals as standard. Both models also come with a limited-slip rear end.

Both Cadillac Blackwing models offer the latest fourth-gen magnetic suspension with front struts and a 5-link independent rear suspension. A front splitter reduces lift to keep the ride firmly planted, along with a rear spoiler and underbody panels that increase the aerodynamics and handling. These models are clearly designed for the track but would be equally comfortable on the boulevards.

The display is meant for more than showing you the normal gauges. It has three built-in displays – Tour, Sport, and Track along with two views that the driver can optimize to their preferences.  The track display includes a slick shift light plus a performance timer to track your personal 0-60 mph, 0-100 mph times, and quarter-mile time. It also will display your g-forces and offers you access to the launch control where you can tune your settings for your specific track conditions.

To help keep your eyes on the road the CT5-V offers an optional Head-Up Display (HUD). Cadillac also squeezes in a color touchscreen Infotainment display for the usual creature comforts.

If you plan on some track time with these Blackwings, you probably want to add in the performance data recorder option.  With it, you get real-time audio and front camera video, plus 34 inputs of performance data to help you improve your times on the track.

Of course, all these speed goodies come with a price. The MSRP’s start at just under $60,000 for the CT4-V Blackwing and $85,000 for the CT5-V Blackwing. Dealers are accepting orders now for summer delivery, but you better hurry as Cadillac is limiting the production numbers on these two luxury track monsters.

To order yours and dive into the details further check out Cadillac’s Blackwing site HERE.


The Best 2020 Cars Nissan Has to Offer
10 Best Female NASCAR Drivers of All Time
The SOTV-B is the Toughest Pickup in the World and it's Made...
The 10 Best And Worst Car Brands In The Automotive Industry
Toyota Finally Enters The U.S. Long-Range BEV Market With De...
A Game of Inches: 2021 Lucid Air EV Sedan