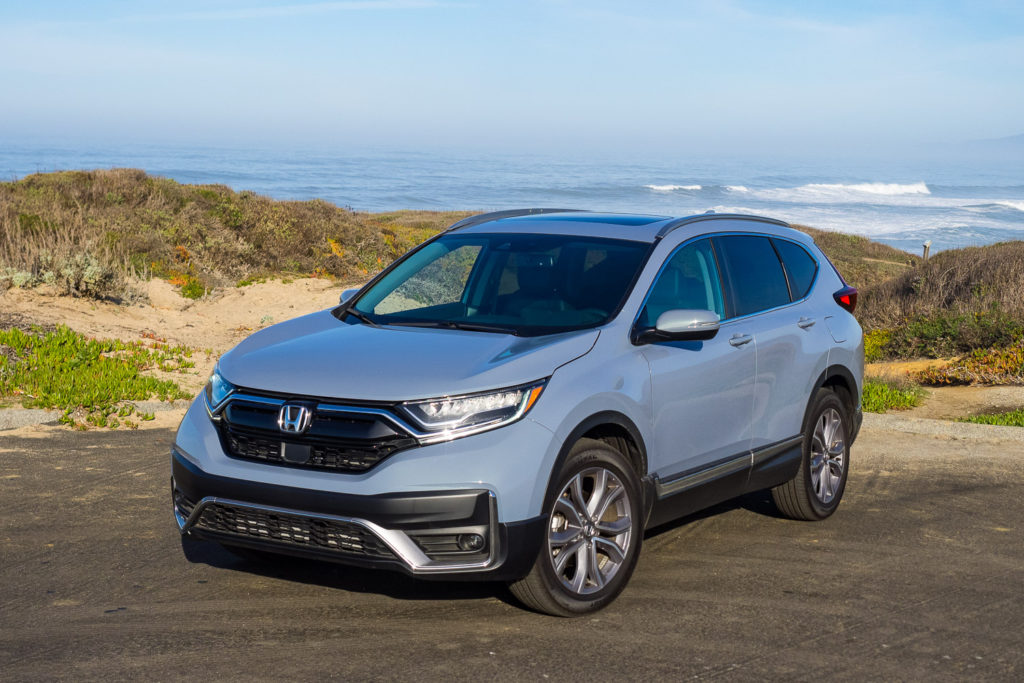 The Honda CR-V is the hands-down best-selling crossover in America over the past 23-years. Can it hold on to its master rank in the face of competition that has a younger image and potentially better value? Without question, the 2021 Honda CR-V has some stiff competition.

We took the 2021 CR-V AWD Touring for a week-long spin around the California coast to see why this very vanilla compact SUV retains the crown in its segment. After some seat time, we questioned how this ubiquitous crossover outsells the competition by a wide margin, but in the end, find understanding.

Let’s get the complaints out of the way right up front, as the Honda CR-V is a quality vehicle worth considering, which we’ll explain below.

Vibrations and the noises from the raspy turbocharged 4-cylinder permeate the cabin. The CVT doesn’t cope well with the turbo lag, which makes the tiny 1.5L motor work harder (and louder), while the auto stop/start shudders and rumbles when it kicks in at stoplights. The massive permanent understeer really takes the fun out of driving anything but a straight road. Speaking of turns, the lane-keep assist feature isn’t so good at keeping the car in the lane, especially when the road begins to bend.

A view around the cabin makes me come to the realization that the faux wood trim should have been left out. The shift console that cascades below the climate controls looks so 2007. The infotainment system is also slow to respond.

Don’t stop reading here, as complaints aside, we came to understand why the 2021 CR-V sells so well.

Will The CR-V Continue To Wear The Crown? 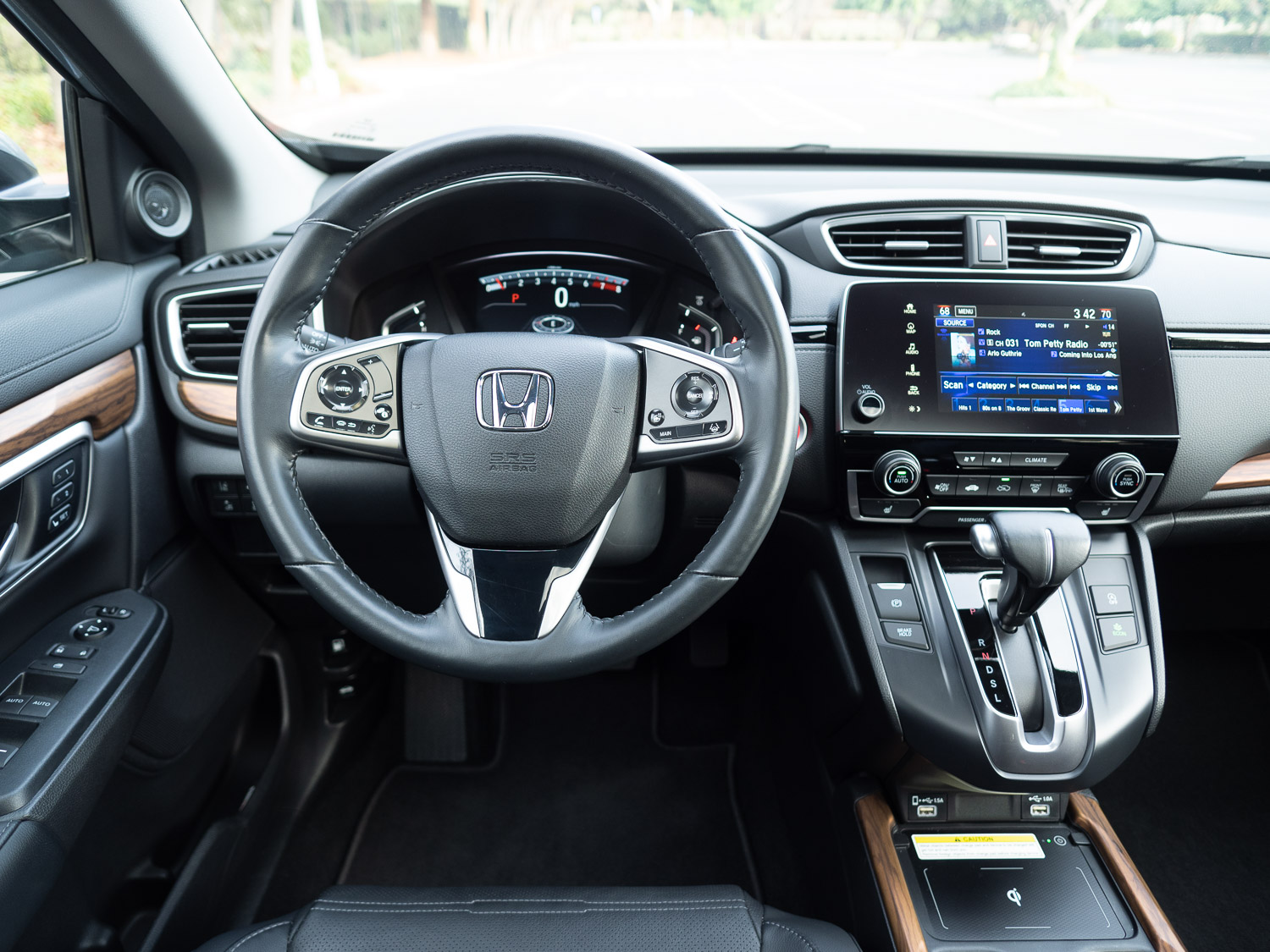 Honda is widely considered a Japanese automaker that banks on the conservative route as a surefire way of boosting a car’s popularity and sales. However, will it fly in today’s quest for market share, especially in the hotly contested compact SUV category? A glance at the roster shows a lot of players who look pretty darn attractive on paper and seem to be chipping away at the CR-V’s market share.

For example, the Subaru Crosstrek — which has a rugged style in-line with the brand, car-like ride and handling, competitive pricing, and available as a plug-in hybrid — has attracted a tremendous number of new customers. In a year upset by a worldwide pandemic, many manufacturers saw a marked decrease in demand. The CrossTrek proved itself by garnering a 31% increase in sales over 2019.

What Makes The 2021 CR-V Attractive to Buyers?

A major consideration when contemplating the next vehicle purchase is safety, and Honda addresses this concern by making their active and passive safeguards available at all levels. Thus, it comes as no surprise that the Honda Sensing suite of active safety features is standard on all CR-V trims.

This bundle consists of adaptive cruise control (ACC), forward-collision warning with automatic emergency braking, lane-departure warning with lane-keeping assist, and another system that will actively help keep you on the road. Many carmakers reserve the more sophisticated safeguards for the upper-level trims. One example is the Hyundai Tucson, which only includes ACC with stop and go, in the top-of-the-line Ultimate trim.

More importantly, the CR-V scores high in crash tests. The National Highway Traffic Safety Administration (NHTSA) last tested the 2019 CR-V, which directly applies to the 2021 model. They gave it an overall 5-Star Safety Rating after going through their series of crash tests.

When the Insurance Institute for Highway Safety (IIHS) did their review, it deemed the fifth-generation CR-V as a “Top Safety Pick.” Along with giving the Honda Sensing Collision Mitigation Braking System a SUPERIOR rating for frontal crash prevention.

Strengthening the road safety checklist, the CR-V has 21 airbags inside the cabin to protect the occupants in the event of a crash.

Right-Size With a Can-Do Attitude

One of the decision points that push the Honda CR-V to the top of the class is its size and usability. Both rows offer plenty of legroom and headroom to ensure passenger comfort. My small Asian stature isn’t a good test when it comes to cabin fit, but my much taller friends had lots of wiggle room and no complaints about close-quarter comfort.

The load area behind the second row can accommodate up to 39.2 cubic feet of cargo, which expands to a midsize SUV-like 75.8 cubic feet when the second row is folded flat. These generous dimensions are only matched by the Subaru Forester — which has a similar boxy interior that’s perfect for hauling the goods after a trip to Costco. Drop the back seat, and there’s enough space to fit a twin mattress. 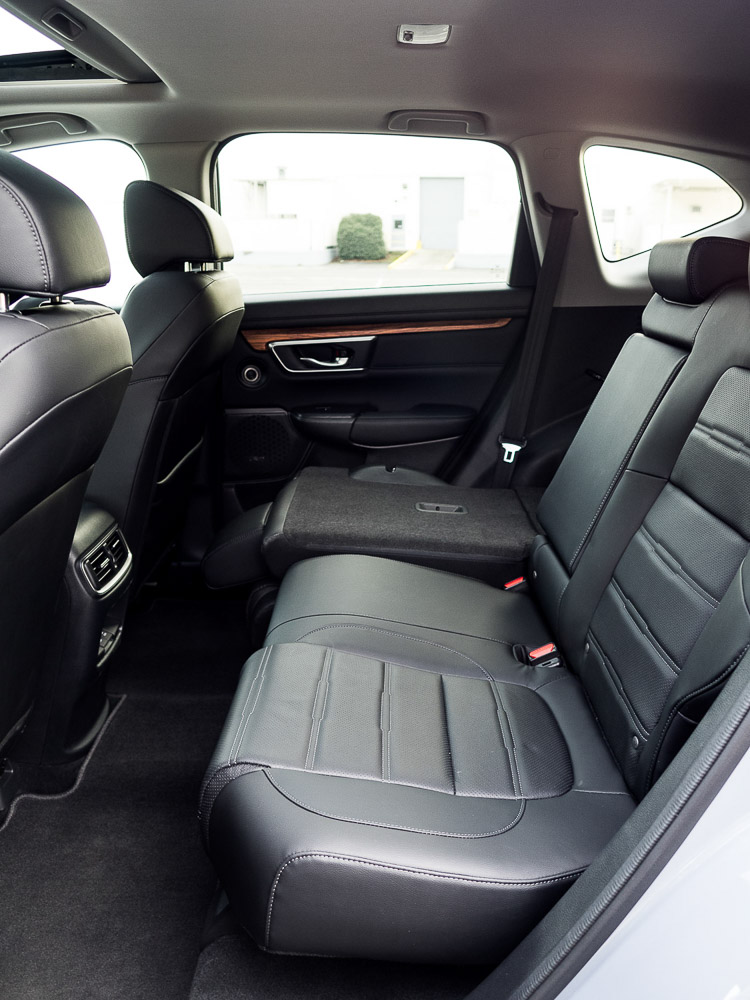 If the cavernous cargo area doesn’t suffice, the CR-V has a 1,500-pound towing capacity that’s sufficient to haul a small trailer. Not to mention roof rails ready for attachments to transport skis, snowboards, bikes, kayaks, and surfboards. 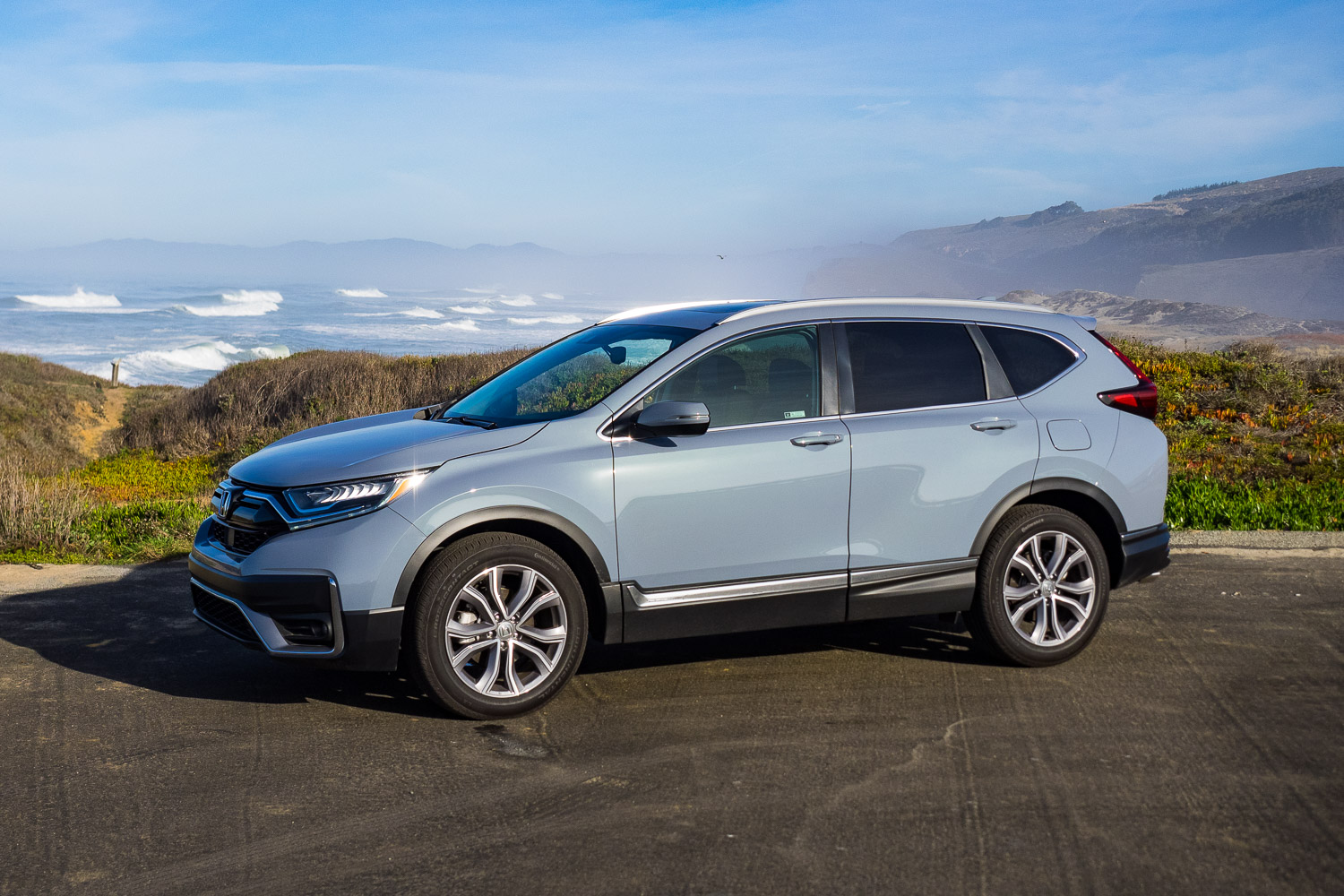 Styling is purely subjective, but the Toyota RAV4, Hyundai Tucson, and the sharp-looking Mazda CX-5 are adept at capturing the eye. Moreover, the all-new 2021 Nissan Rogue sheds its frumpy exterior for something that looks sleek, refined, and balanced.

I mentioned vanilla earlier, and that is how some people view the fifth-generation CR-V. Its clean yet bland design doesn’t stand out among the throngs of SUVs on the road today. It doesn’t scream, “look at me,” and finding it in the parking lot might sometimes be challenging. The good news is that it won’t look dated five or ten years from now.

Boring Can Be Good 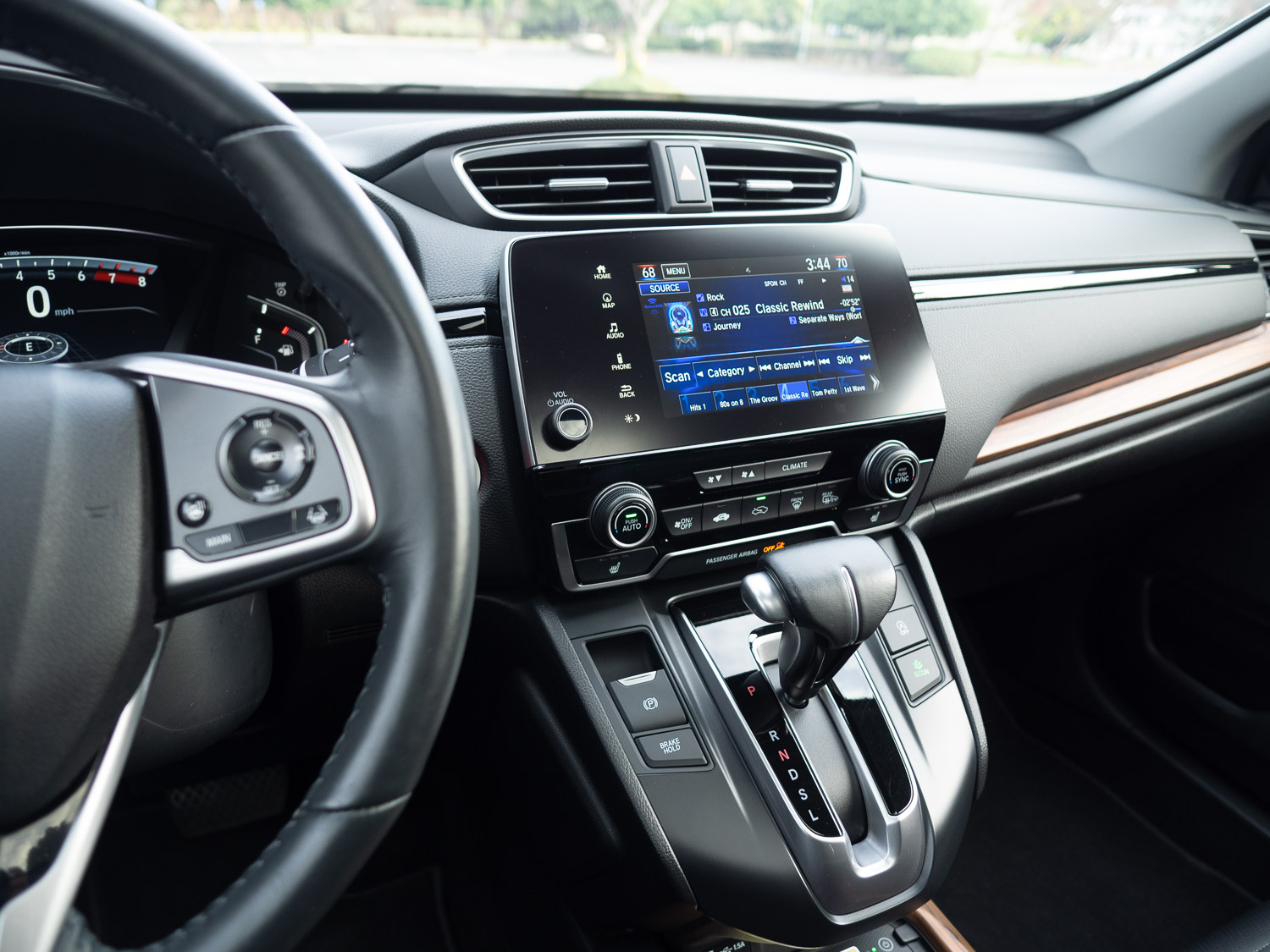 Kelly Blue Book thoroughly examines cars each year before releasing its annual “Best Buy” list. The Honda CR-V is such a consistent and robust vehicle; it earned the title of “Best Buy in the Compact SUV” category five times — three consecutive times for the current generation model.

Like all models in the Honda lineup, the CR-V enjoys the brand’s sterling reputation for high resale value and dependability. Given that Honda’s best-seller sits in the most popular category in contention with a bunch of over-achievers, the CR-V’s hardy sales prove that buyers don’t like taking chances when it comes to big-dollar items, myself included. 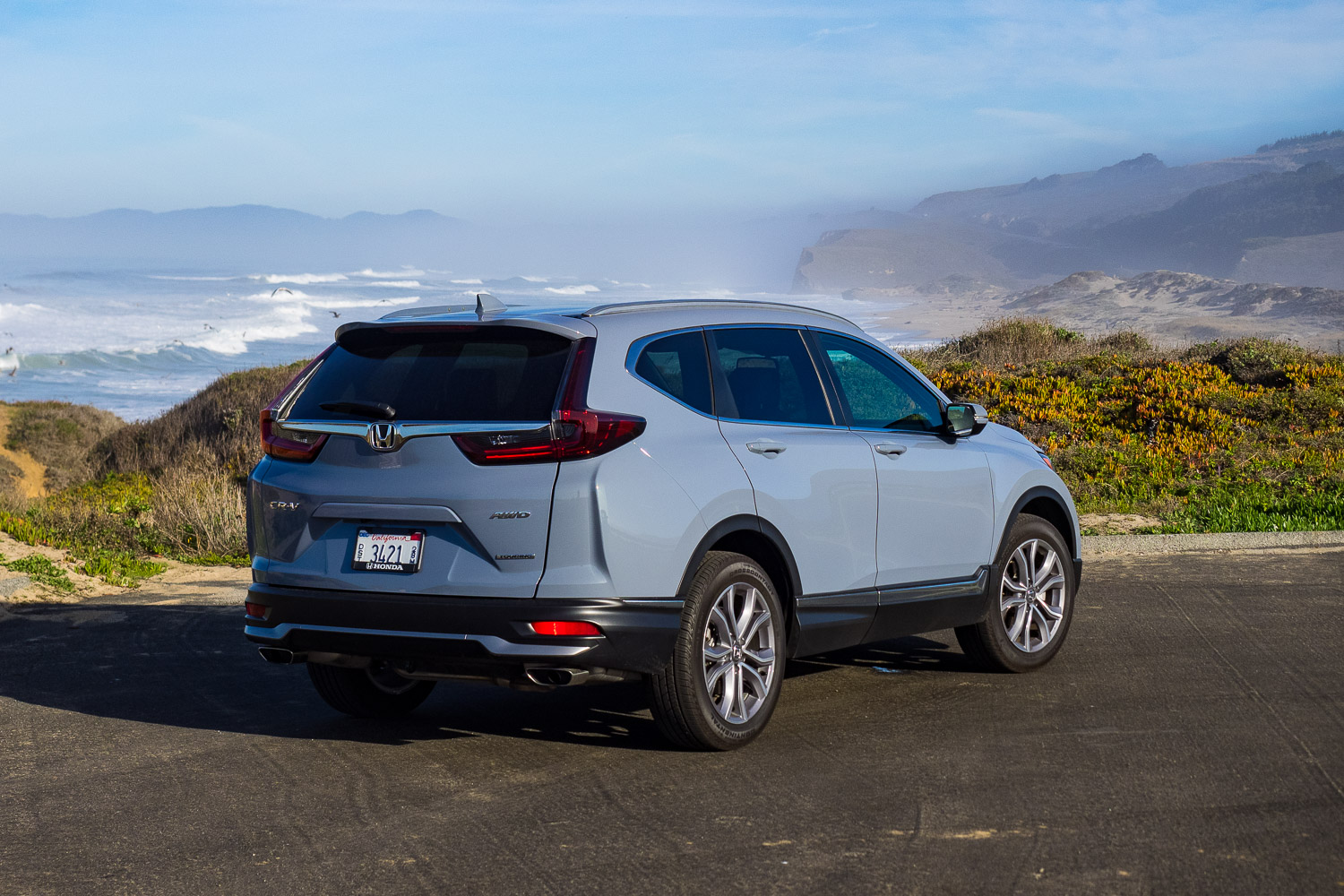 And while there are plenty of small crossover SUVs to choose from in the marketplace, the CR-V, with the addition of its new Hybrid model last year, offers a complete range of vehicles suited to the needs of shoppers in this segment. Because of its strong showing across the board when it comes to features, utility, and everyday dependability, the 2021 Honda CR-V is a safe bet to continue its reign in the compact crossover segment this year, too.

Derek is an adept wordsmith and grammar sleuth that lives, breathes and dreams all things automotive. Not satisfied with only reporting what is happening in the automotive industry, he is also skilled at crafting a story that goes well beyond the specs and shiny paint. From time to time, practicing and growing the photography skills serves as a gratifying diversion when not occupied with cars.