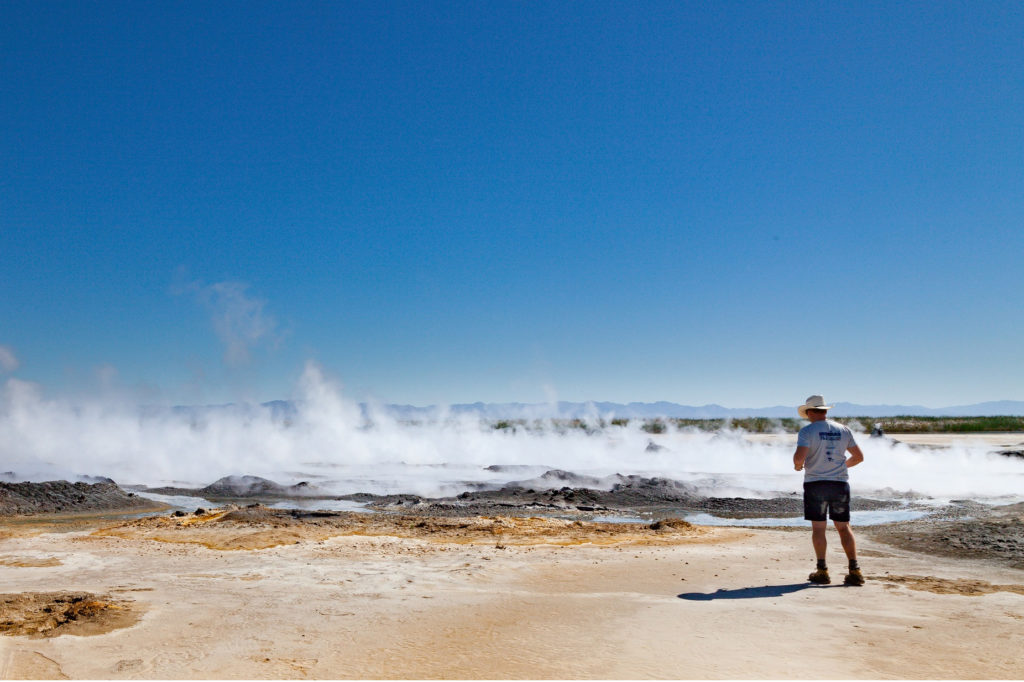 Visiting the Salton Sea is like bathing in the past. Its semi-abandoned resorts are shadows of its mid-century heyday as California’s “Salton Riviera,” when sleek motels and vacation homes sprung up around this glittering saline lake midway between Palm Springs and the Mexican border. Locals still talk of the water skiing, abundant fishing, and packed beach bars before the tourists evaporated as the water turned increasingly foul.

Lacking an outlet to the ocean, the Salton Sea has been slowly poisoned by toxins lurking in the very agricultural run-off that inadvertently created it in 1905. Countless dead fish now line its reeking beaches, where white “sand” is actually the pulverized bones of millions of their forebears. Blighted by derelict, graffiti-slathered buildings, the one-time “miracle in the desert” has become a forgotten, forsaken eyesore.

Yet lately the Salton Sea has ironically become associated with a high-tech, less polluted future. This is due to its location atop one of the world’s largest sources of geothermal energy, as evidenced by the area’s many hot springs, mud volcanoes, and power stations. The underground geothermal brine reservoirs of the Salton Sea Known Geothermal Resource Area (KGRA) hold massive resources of lithium — an estimated 16.5 million tons. And the automotive industry craves that metal for lithium-ion batteries in the hybrid and all-electric vehicles (EVs) that are key to a cleaner future.

Lithium is central to GM’s plans to make more affordable, higher-mileage electric vehicles, but most of it is currently mined and processed in Latin America and Australia. Hell’s Kitchen, named after an early 20th century Salton Sea restaurant/dancehall, could become the country’s largest lithium project by 2024.

As an anticipated part of its $35 billion global commitment to EVs and autonomous vehicles, GM will be the first company to make a multi-million-dollar investment in Hell’s Kitchen. As the initial investor, it will have dibs on lithium produced by the first stage of the project, including an option for a multi-year relationship. It makes GM one of the first automakers to develop its own source of the metal.

Batteries are one of the largest cost drivers of EVs. Lithium is a key battery material used in the cathodes and electrolytes of GM electric cars like the Chevrolet Bolt EV and Bolt EUV. So, what’s going on beneath the festering Salton Sea could prove central, down the line, to the proliferation of affordable EVs. According to CTR, a fully developed Salton Sea KGRA would be capable of producing more than 660,000 tons of lithium carbonate equivalent per year, while Hell’s Kitchen has a total projected capacity of 330,000 tons per annum.

Additionally, earlier this month GM announced the Wallace Battery Cell Innovation Center. This all-new facility will significantly expand the company’s battery technology operations and accelerate the development and commercialization of longer-range, more affordable EV batteries. Set to open in mid-2022, the Wallace Center will be located on the campus of GM’s Global Technical Center in Warren, Michigan.

General Motors’ intended all-electric future includes the creation of 30 new global electric vehicles by 2025. The idea is to produce EVs for every style and price point, as it will take millions of them on the road to make a meaningful impact towards a zero-emissions, post-petroleum future.

“Climate change is real, and we want to be part of the solution by putting everyone in an electric vehicle,” said Mary Barra, Chair and CEO of General Motors.

GM started leasing the first-ever mass-produced and purpose-designed electric vehicle, the EV1, back in 1996. It produced the limited-production Chevrolet Spark EV in 2013-2016. Today, there’s the Chevrolet Bolt EV and, by next year, the EUV. In China, the Chevrolet Menlo electric CUV has been available since early 2020, and last year GM’s electric Opel Corsa-e debuted in Europe. The Cadillac Lyriq electric crossover is due next year, as is the GMC Hummer EV.

A major step in GM’s electrified journey was the announcement last year of its next-generation Ultium EV batteries. The Ultium battery pack costs nearly 40% less than those in the Bolt EV, GM claims, while projecting that a second-generation will cost 60% less than the batteries used today.

“Our team accepted the challenge to transform product development at GM and position our company for an all-electric future,” said Barra. “What we have done is build a multi-brand, multi-segment EV strategy with economies of scale that rival our full-size truck business with much less complexity and even more flexibility.”

Ultium batteries are unique in that their large-format, pouch-style cells can be stacked vertically or horizontally inside the battery pack, which allows engineers to optimize battery energy storage and layout for each vehicle design. Ultium energy options range from 50 to 200 kWh, which could enable a GM-estimated range up to 400 miles or more on a full charge with 0 to 60 mph acceleration as low as 3 seconds.

Such developments are exciting and hopeful indicators towards a cleaner, more sustainable planet and future. But they all require lithium and lots of it. While each vehicle and battery may require less of the metal, thanks to breakthrough technologies like Ultium, the sheer proliferation of EVs planned by automakers and governments worldwide means that vast quantities will be needed, nonetheless.

General Motors’ investment in Hell’s Kitchen could also prove a boon to the Salton Sea and surrounding Imperial County, which has long been plagued by high unemployment and low wages. Although just two and a half hours from the bright lights of Los Angeles, Imperial County has an unemployment rate of 19.4%, as of August, compared with 7.5% for California as a whole and 5.3% nationwide.

At total project capacity, CTR will create approximately 1,450 direct project jobs and approximately 480 construction jobs. Over 2,500 ancillary jobs will be created, according to an Economic Impact Assessment conducted by the Imperial Valley Economic Development Corporation.

Ambitious plans to revive the Salton Sea have included importing water from the Pacific Ocean and even building a 125-mile aqueduct to connect it to the Sea of Cortés.

As I wandered its forlorn Bombay Beach community last week I noticed a hand-painted sign announcing “Lithium for Sale” propped against a trailer home. And that encapsulates the most tangible hope for regaining at least some of the Salton Sea’s former glory, while also helping to ensure a more sustainable EV future for America.


The Best (And Worst) Of 2021 Volkswagen
New Porsche Cayenne Crushes Italians in Record Nordschleife ...
2015 Toyota Supra
Reviewing and Ranking The Best Automatic Motorcycle
2021 Mustang Mach 1: The Ford Icon is Back! [Pictures & Spec...
The 2016 BMW i9 Supercar is a GO