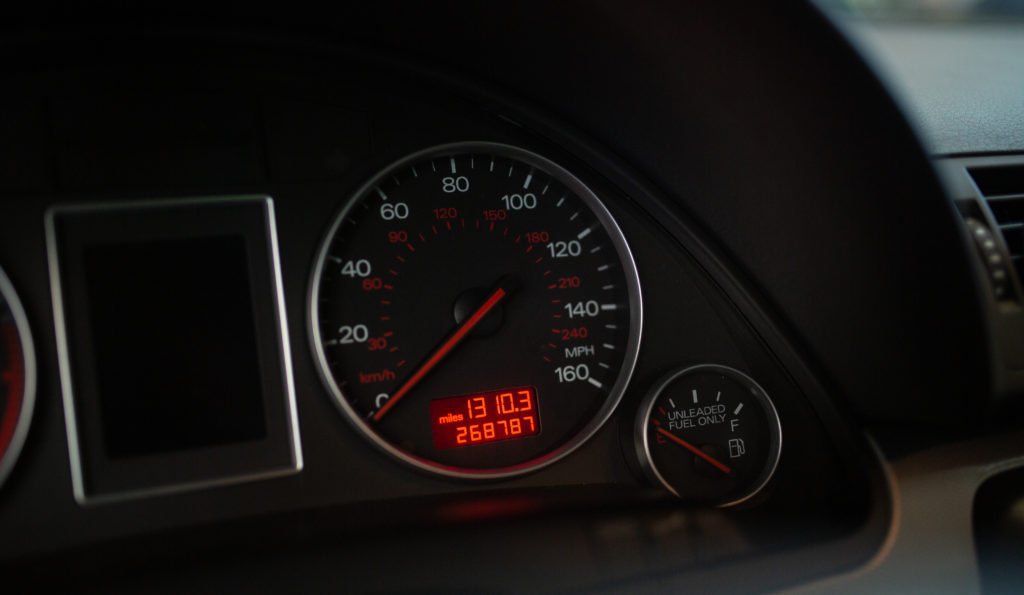 Certain makes of cars have a reputation for longevity. When well-maintained, Toyota, Honda, Subaru, and older Mercedes-Benz models are all known for becoming high mileage cars. Diesel engines are also recognized for their durability. But what does it take to keep a car running long enough to wrack up this kind of mileage?

High Mileage Cars: How to Hit a Quarter-Million Miles

Most modern cars, regardless of manufacturer or powerplant, can stay roadworthy for decades if treated right. And that includes hybrids and, yes, American-made cars. For example, my wife’s 2009 Toyota Sienna currently boasts over 278k, albeit with a rebuilt transmission. But I also owned a 1991 Mazda Navajo — a rebadged Ford Explorer built in Louisville, Kentucky — that had well over a quarter-million miles when I sold it.

I spoke to six folks who’ve owned cars that topped 250,000 miles to learn about the habits, tips, and tricks that may have helped them hit that milestone.

Michael la Fleurnois, from Houston, Texas, bought a 1979 Volkswagen Dasher (marketed as the first-gen Passat outside of North America) as his first new car in 1980. Over the next nine years he put close to 400,000 miles on the unpretentious stick-shift hatchback, including numerous 3,100-mile round trips to Los Angeles.

“I was not what you would consider a good car owner,” Michael recalled. “I abused this car badly, and it just kept going.”

Michael says he never had any major repairs performed on the 4-cylinder engine or transmission, and only replaced a few parts: CV joints once, the clutch once, the alternator twice, a water pump, and brake pads four or five times. He exclusively used Castrol engine oil, but only changed it “when I remembered to.” Michael finally sold the Dasher for $750 in 1989, after the starter exploded and cracked the tranny housing.

“I sold it to a guy who was going to replace the tranny and give it to his son,” Michael remembered. “I did see it about a year later, still going strong…. It is probably still on the road somewhere.”

Suitably impressed with the durability of his first VW, Michael promptly bought another one: a fully loaded 1989 Jetta.

“It was a complete nightmare,” he lamented. “VW does not make them like that [Dasher] anymore.”

Mike Lewis, from Santa Clarita, California, bought a 1999 Chevrolet Silverado new. He sold it earlier this year with over 250,000 miles. Neither its 5.2L V8 nor its transmission was ever rebuilt or replaced, and even the original brakes and rotors lasted 200,000 miles. The only time a dealer worked on it was to replace a fuel pump.

For Mike, the secret of this longevity was self-maintenance using OEM parts when needed, conscious driving, and careful attention to small issues before they became major problems requiring professional repair.

“I always did all maintenance on it myself,” he said. “I always used synthetic oil, preferably Mobil 1. I checked belts regularly and washed the engine compartment every few months to check for oil leaks or anything else that needed checking.”

Being aware of how driving habits impact a car was also key, Mike explained. Feeling what his Silverado was doing while accelerating, turning, and braking helped him to nip many potential issues in the bud. Being a patient driver and not racing between lights, plus regularly using a brake cleaner, contributed to the remarkable lifespan of his Chevy’s brakes.

“The hardest thing on your car is city driving. Try to keep rolling at all times. Every time you stop you wear brakes and when you take off you put a load on the engine,” Mike said. “Most people just drive from point A to B and don’t care about their cars until they break down. I’d rather spend a couple hundred dollars a year maintaining my truck than have a $600-700+ new car payment for five years.”

Mike’s Silverado was in such good shape that he got $4,000 for it, even with over a quarter-mil on the clock. And it’s still going strong with its new owner.

Since first appearing 25 years ago, gasoline-electric hybrid vehicles have proven remarkably durable. In late 1999, Honda’s futuristic Insight liftback became the first hybrid car available in North America. Among its initial buyers were the parents of Anna Jones, who now lives in MidCoast, Maine.

“It was my second car that I started driving my first year of college and drove for nearly 20 years,” Anna recalled. “[A] manual five-speed two-seater in the iconic ‘Electric Lemon’ bright green color.”

The Insight had a 1.0L, 3-cylinder VTEC-E gasoline engine with an integrated motor-assist hybrid battery system with regenerative braking. To this day, it ranks as the most fuel-efficient U.S. EPA-certified gasoline-fueled vehicle.

While the Insight’s technology was groundbreaking, Anna’s car suffered none of the teething troubles that might imply. She sold the car in 2019 with more than 269,000 miles, albeit after an engine rebuild at 215k. The hybrid battery was replaced twice (once under warranty).

But Anna was an Insight enthusiast who took her car’s maintenance seriously. For its first 12 years, it was only serviced at Honda dealerships, and she participated in the InsightCentral.net forum. In 2012 she discovered that America’s top Insight expert lived near her then Los Angeles home. He’d put over 500,000 miles on the same model, and his insight proved invaluable in keeping Anna’s car roadworthy.

Anna only sold her Insight after starting a family, and still misses it.

“Aside from living a large chunk of its life in Southern California, luck, and being an exceedingly safe driver, I am sorry to say that I think the car was just a well-made gem,” she concluded. “Becoming an expert driver and an expert on your car is the best thing you can do. Having a community to provide knowledge helps immensely.”

In 1986, Matt Southwell, from Alpena, Michigan, bought his mom’s 1977 Oldsmobile Cutlass Supreme after years of borrowing it as a teenager. It was a product of so-called “malaise era” of American cars (roughly 1973-1983), when they suffered from famously poor performance. Sure enough, the Supreme’s 110-hp, Buick 231 V6 mill earned it the nickname “Nutlass Cutlass” among Matt’s friends. Yet it proved to be a faithful ride that had over 261,000 miles when he finally sold it.

“It wasn’t a car. It was the family dog!” Matt enthused. “It had the loyal soul of a labrador retriever. Many road trips, if it was running rough, it always limped home. Always made it. Never stranded me. It had the soul of beloved hound.”

The Nutlass Cutlass never had an engine or transmission rebuild, though it did require replacement doors due to “Michigan cancer” (aka rust). Matt’s dad tuned the car often, the oil was changed religiously, and only Valvoline oil and Fram filters were used.

But in the end the rust won, and Matt sold the car for the cost of its stereo — $150. He later heard that it caught fire (“It died a Viking death — fitting for such a valiant soul!”). But he harbors fond memories of ol’ Nutlass, nonetheless.

“If I found one in fine shape, I’d buy it on the spot,” he said. “The Nutlass Cutlass couldn’t spin its tires in loose gravel, but it always started. Rode like a glider on the highway. Was massively comfortable … plus I still love that body. Sharp-looking car.”

Even in a small country like England, some cars accumulate serious miles. In the case of Harvey Giles’ 2005 Volkswagen Golf 1.9 TDI, which boasts 291k and counting, it helps that he’s a self-employed mechanic and that his V-Dub has a diesel engine.

“In my 35 years’ experience, any vehicle can reach a high mileage if its maintenance program is followed, both scheduled and preventative,” said Harvey, who works on both road and race cars.

Harvey’s Golf is his current daily driver. He has always serviced it as specified by VW, using genuine or OEM parts and lubricants. In its 16 years, the car has had all wheel bearings changed out only once, as well as one clutch and flywheel replaced, plus numerous windshields.

While the lifespan of a gasoline engine is typically around 200,000 miles, a well-maintained diesel can achieve over a million miles. This durability is partly due to design. A diesel engine is gear-driven; gears are easy to fix and never lose timing. The higher compression ratios and cylinder pressures common to diesel engines mean that they have a larger crankshaft and camshaft, using more substantial bearings and sturdier main rod bolts. Furthermore, diesel fuel has the consistency of light oil, so it lubricates as it flows through cylinders. This results in slower cylinder wear than that caused by gasoline, which is more acidic and can degrade surfaces.

“Best advice to get maximum life from your car is to respect it, let it warm up with driving gently, and not just leaving it idling,” Harvey said. “Keep up with all servicing as required and/or needed. Never shut down the engine immediately after a hard thrash, let it idle for about 30 seconds before turning off.”

When Robert G., from Venice, California, bought a 1997 Toyota Corolla in 2016 it already had over 220k on the clock. But, with careful maintenance, much of which he performed himself, he still got another 50,000 from the 4-cylinder CE model.

“Most Toyota and Hondas, and I believe any car, can be on the streets forever, as long as you put some money into them and do the regular service needed,” said Robert. “Do your homework. Learn about issues others have had with the car, and also go to the auto store and buy the manual for your car or watch YouTube mechanics.”

Robert performed his own oil changes and brake jobs. With a little help, he also replaced the motor mounts and water pump. Shop work at Culver City Toyota was only fairly minor, such as replacing headlights.

“Once you know the car you are going to potentially buy, whether it’s a private sale or at a dealer, get a mechanic to check it out,” Robert recommended. “It can cost you $250-500 to do, so it’s worth it, as it can save you from getting a ‘lemon’ or spending more than you wanted in headaches. If the seller says no to that request, then walk away.”

High Mileage Cars: Can Your Vehicle Go the Distance?

And so there you have it. Aside from a little luck, the secret to high mileage cars is rooted in thorough, timely, and consistent maintenance, alongside sensible driving. Except perhaps in the case of Michael’s VW Dasher, which was simply a freak of automotive nature!