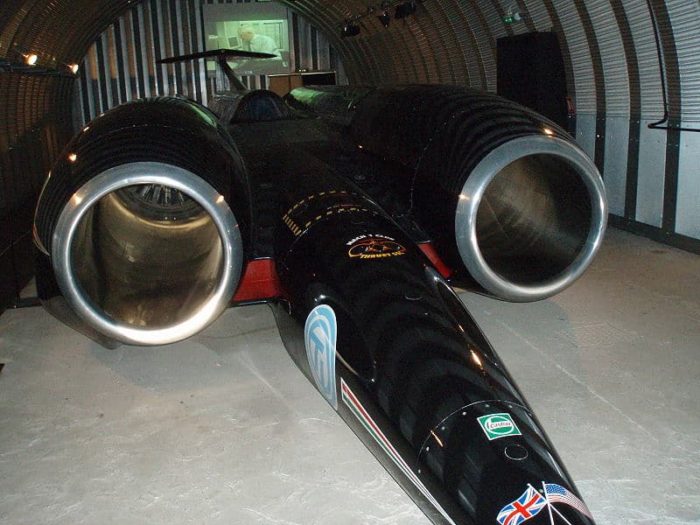 Ever since the first Ford Model T rolled off the assembly line in 1907, and possibly back when the first Mercedes-Benz was produced in 1896, drivers took an interest in speed. The first automobile races didn’t come until a few years later, and enthusiasts recognized two things about speed. More power and more aerodynamics equals more speed. Want to go faster with the same body? Add power. Want to go faster with the same engine? More aerodynamics. Using these early principles, early speed pioneers took the flats and the sands to carve out their places in land speed record history: Here are a few notable speed records over the years: 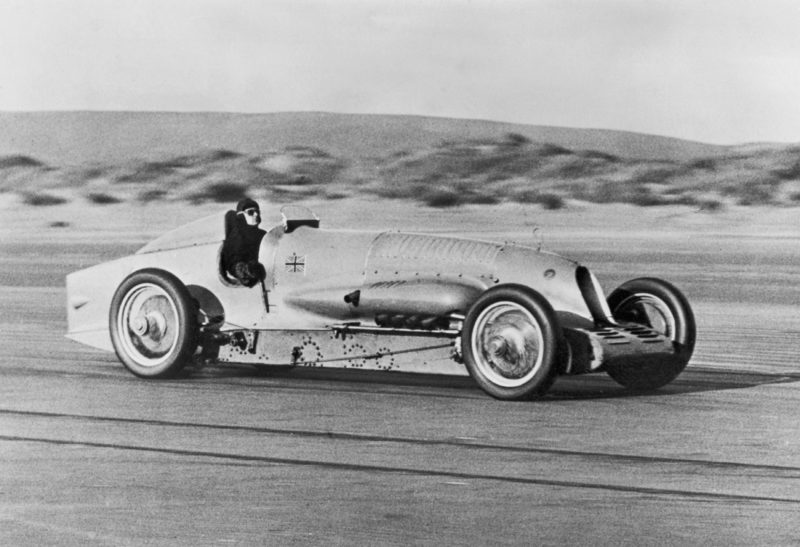 Just in case you are wondering, the speed of sound is 763 mph, which makes the ThrustSSC record come in at Mach 1.016. One of the world’s fastest production cars, the Bugatti Veyron Super Sport, is equipped with a 1,200 W16 engine, and is only capable of Mach 0.3.

“Some speak in awed tones of witnessing an eclipse of the sun, of seeing the Northern Lights or a shooting star. But to stand on a playa desert, watching what in turns seems to be a mirage, a boat, a big black locomotive and then, for fleeting moments, ThrustSSC, chased by its own roostertail of dust, and then to hear the two unmistakable sonic booms, is to experience a moment so emotionally charged that all others pale in comparison.” – The Bloodhound Project

I recounted some amazing speed records that started way back from the first days of the automobile. Speed records climbed gradually past 100 mph, then 200 mph, all the way up to just a hair over the speed of sound in 1997. That record, 763.035 mph [Mach 1.016] has stood strong since then. There are a few teams working to break that record, possibly in the next couple of years. 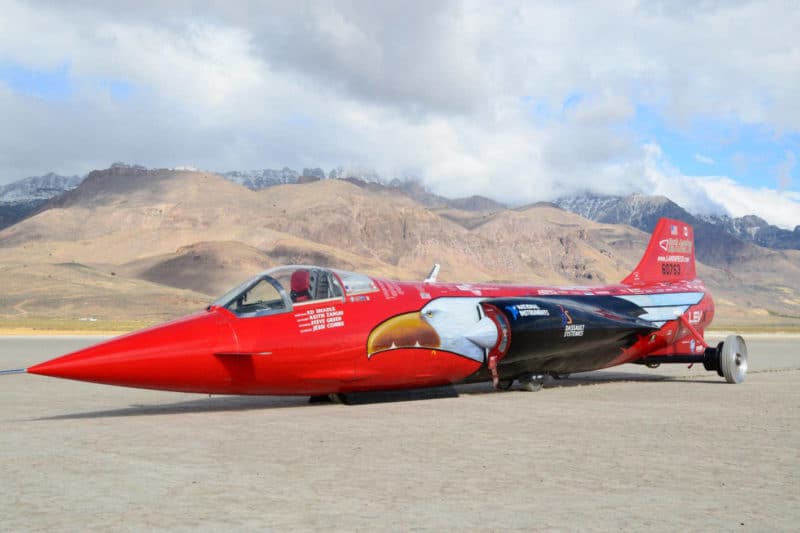 A team in Washington is working on just hitting 800 mph, with a refurbished Lockheed F-104 fighter jet fuselage. The North American Eagle, drawing funds from both sides of the American / Canadian border, is powered by a 42,500 hp jet engine that should be able to power the vehicle to at least 800 mph.

Their vehicle has made over 30 successful test runs at up to 600 mph, and are working to get the final tweaks in before making the record attempt. At the moment, though, it seems that funding is falling a little behind to facilitate final testing and adjustments. Designer, builder, and driver Ed Shadle “would like to take that record away, even if it’s only for a year or two. 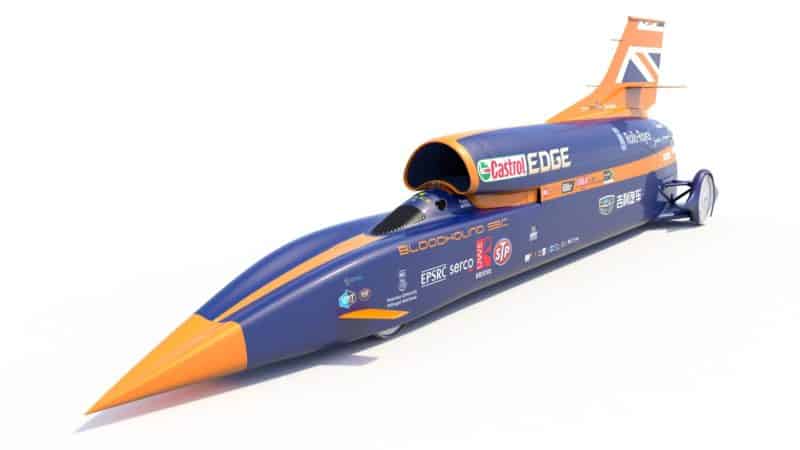 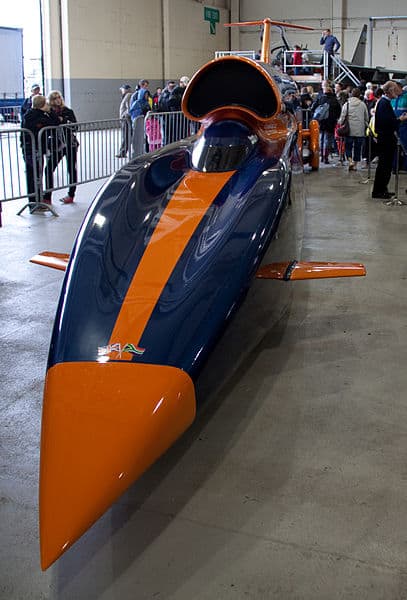 Next summer, Andy Green, the driver of the ThrustSSC, which broke the speed of sound in 1997, will be testing The Bloodhound Project’s new vehicle up to 700 mph, without the full powertrain in place. The thing is, the new hybrid vehicle is a three-stage monster that is hard to imagine.

First, a Cosworth Formula 1 engine pumps liquid oxidizer into a solid fuel rocket, which generates about 35,000 hp. The hybrid solid-fuel rocket is a good choice, because it depends on the oxidizer for ignition, which means that letting off on the Cosworth reduces the rocket’s output. This makes it a little safer than the light-the-fuse and hope-for-the-best rocket types.

Rocket testing was done recently in Cornwall, England. “We were sealed in a control bunker about 200 yards away” from a second sealed bunker with the rocket, Green says “I could feel it through the ground. You could smell the fuel. It was the smell of success.”

On top of this, a borrowed EuroJet EJ200 military jet engine generates an additional 100,000 hp. Green plans to use all 135,000 hp to get the car past 1,000 mph, which, incidentally, is faster than the world record low-altitude fighter jet pass at 988 mph, 15 feet off the ground. With specs like that, the Bloodhound Project could possibly set the fastest land speed record yet. 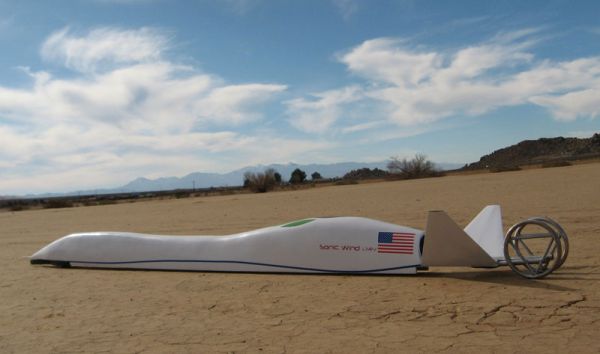 In Los Angeles, Waldo Stakes of Land Speed Research Vehicles, is designing a vehicle which is planned to go way past The Bloodhound Projects 1,000 mph. Using a 1960’s XLR-99 rocket engine, which was built for the X-15 research plane that set the air speed record of Mach 6.72 [4,520 mph] in 1967. Stakes plans on the Sonic Wind breaking 2,000 mph with 500,000 hp and a simple streamlined rocket design.

Working to get the vehicle complete has been taking lots of time and plenty of investment and donations, which Stakes gladly accepts. In July, after getting some of the body work completed, “A friend came by to see it and as he watched me building this 55 foot long rocket car while working in the dirt he said…”Your story is like the World’s Fastest Indian only on steroids.” Denise saw all the body panels on the car and said…”It is starting to look big and scary.” I think it looks purposeful and powerful.”

The World Land Speed Record could belong to the Sonic Wind for a long time if lives up to it’s name and purpose. “Here’s how I see it: The North American Eagle will break the record, then the UK [The Bloodhound Project], then I come in and bat cleanup,” Stakes says. Is it really that simple? Can the current land speed record be so easily broken?