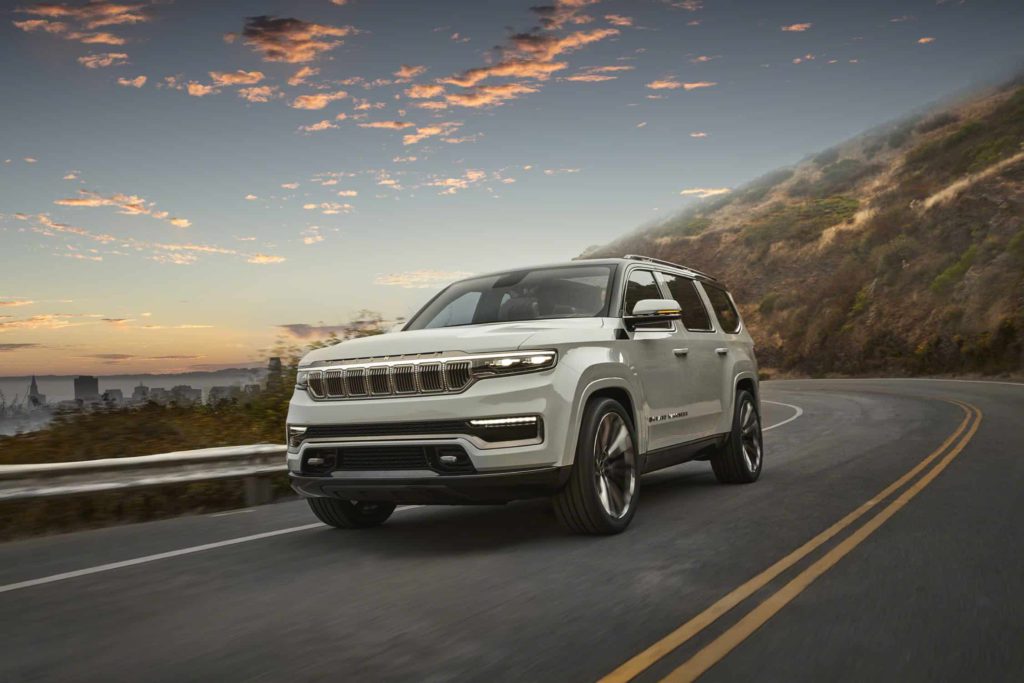 Jeep is outwardly courting a more “affluent array of customers” with their latest line of vehicles, the Wagoneer “portfolio of vehicles.” To launch into this new segment, Jeep has released the Grand Wagoneer Concept. While lots of the details of this concept truck are sure to hit the chopping block before the big luxury SUV hits dealer lots next summer, the concept should be a very good representation of what to expect from this new premium Jeep offering. 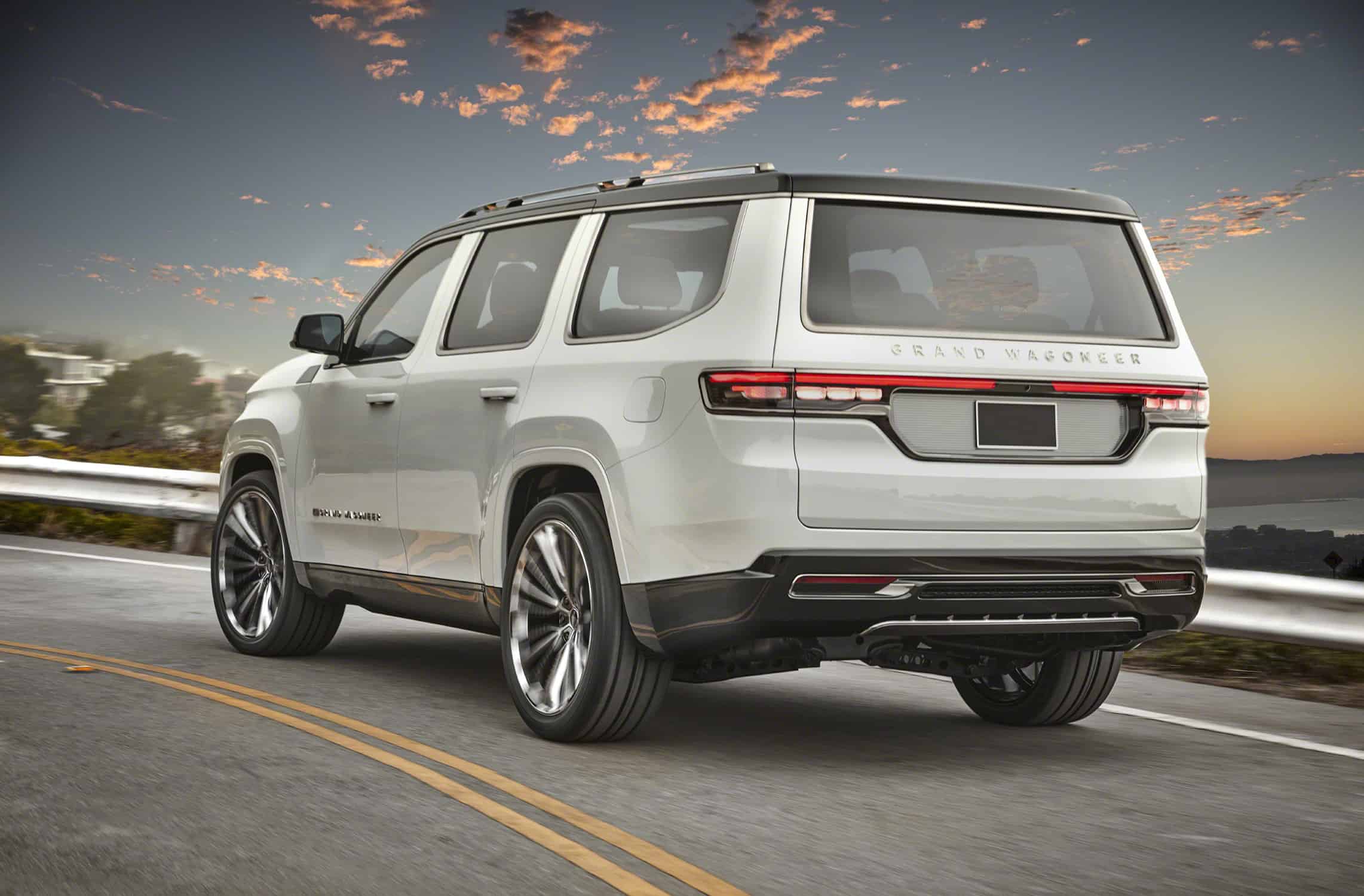 This reincarnation of the Wagoneer nameplate is a glimpse into what Jeep sees as its future. To start with the future is electric-powered, like the plug-in hybrid (PHEV) system in this concept.

Next up are two first, both entertainment related. The first-ever McIntosh vehicle stereo system is featured in this concept vehicle. The system has 23 speakers and a 24-channel amplifier for a truly immersive sound experience. The front-seat passenger even gets the first-ever passenger screen in an SUV. The screen itself has a coating on it which blocks the screen content from distracting the driver. 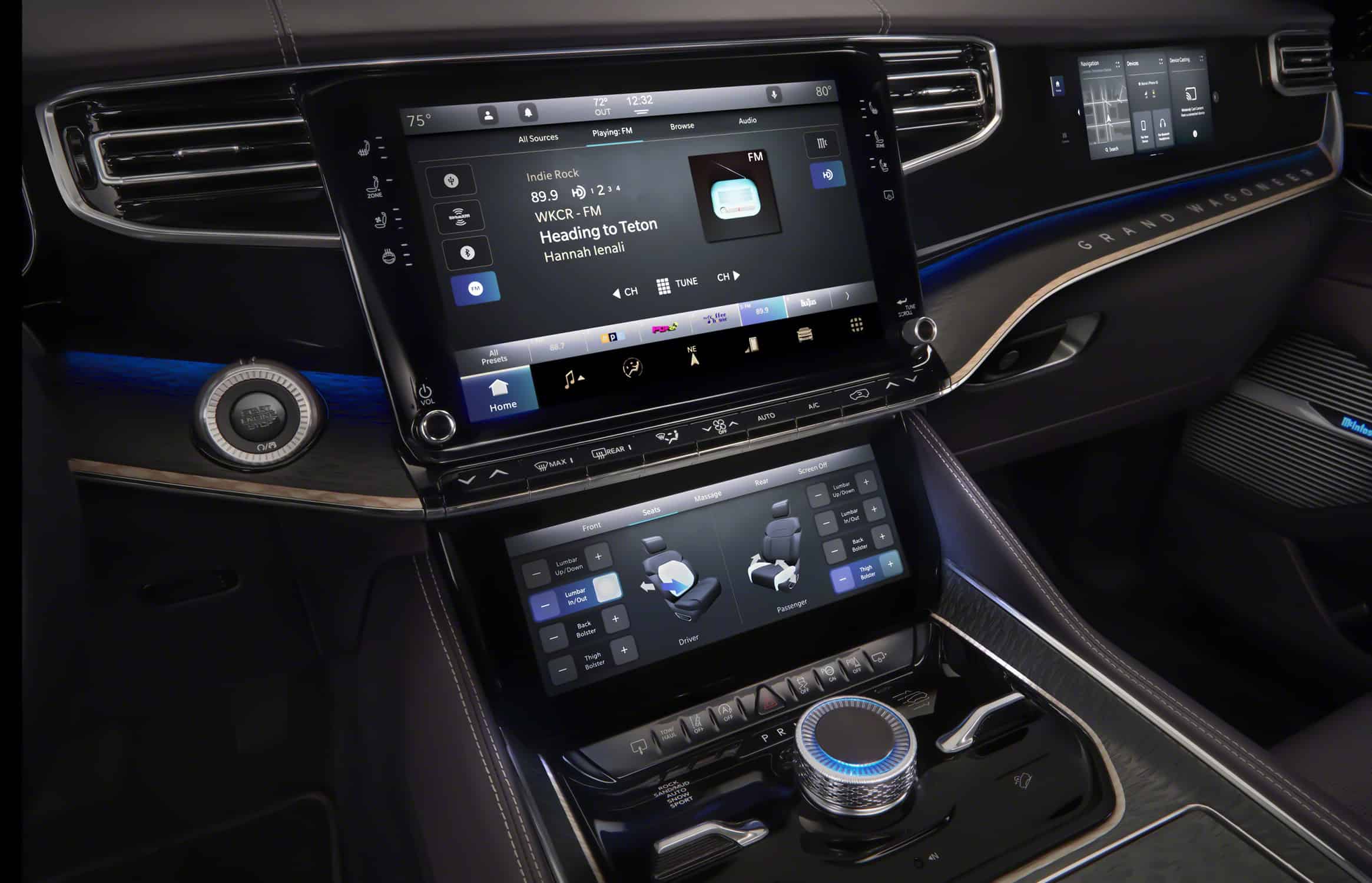 The theme here is luxury, and Jeep went all out with a ton of fine details and upscale materials to elevate the Grand Wagoneer Concept. Inside there are lots of teak wood accents, an homage to the original wood paneling on the exterior of the Grand Wagoneer. The wood also exudes luxury and the craftsmanship of a fine yacht. The full-pane glass roof also features a map of the Detroit area and provides the cabin with an open-air feel. 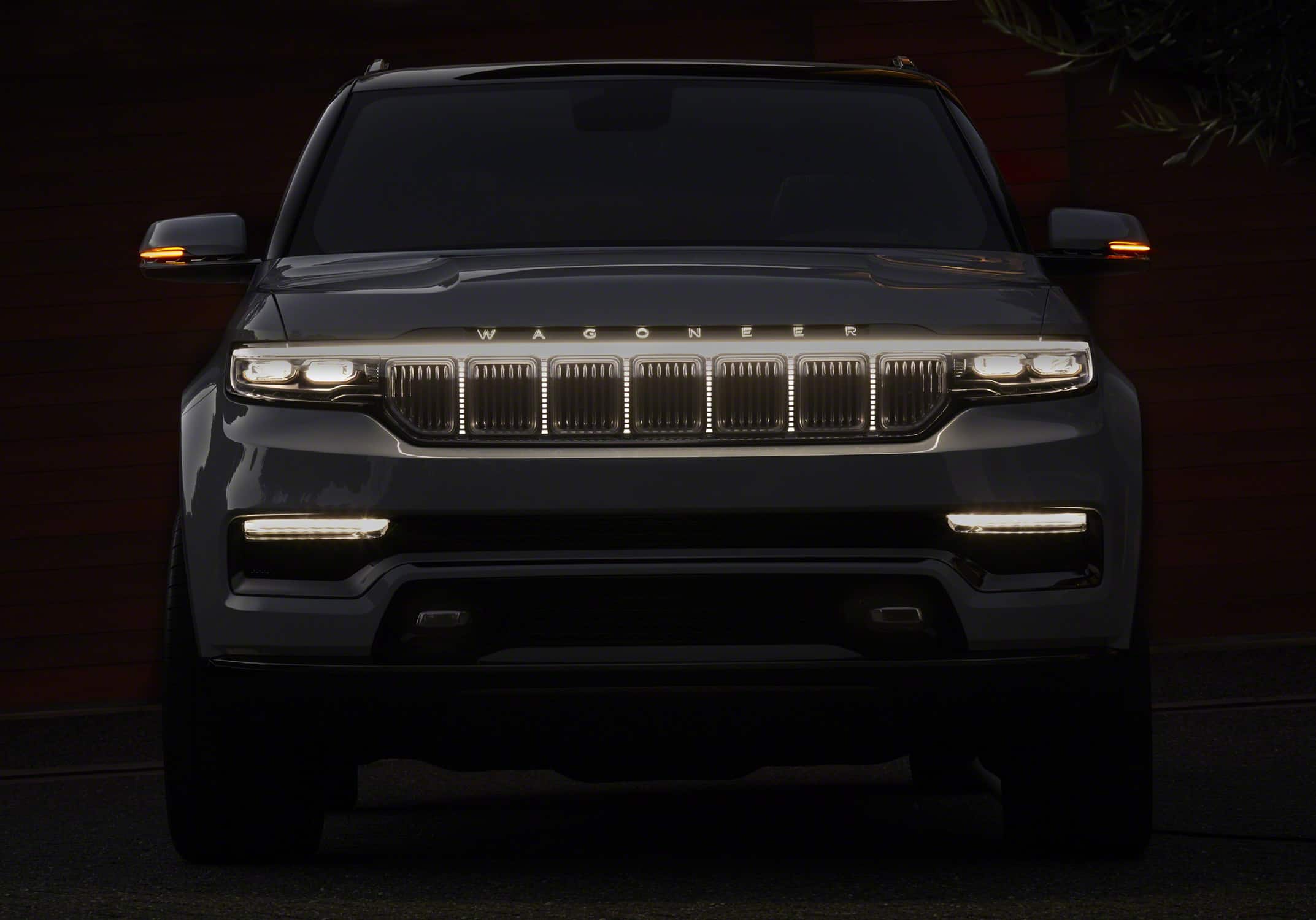 The concept’s traditional seven-slot Jeep grille has been thoroughly updated with fine latticework details and LED illumination. The LED headlights feature teak wood inserts, as does the roof rack towers. An obsidian black aluminum front skid plate and prominent tow hooks let you know this Jeep is also meant to be used off-road. However, the massive 24-inch wheels scream on-road only vehicle. We’re pretty confident the big intricate wheels featuring 3D printed internals won’t make it to production, but they do look good! 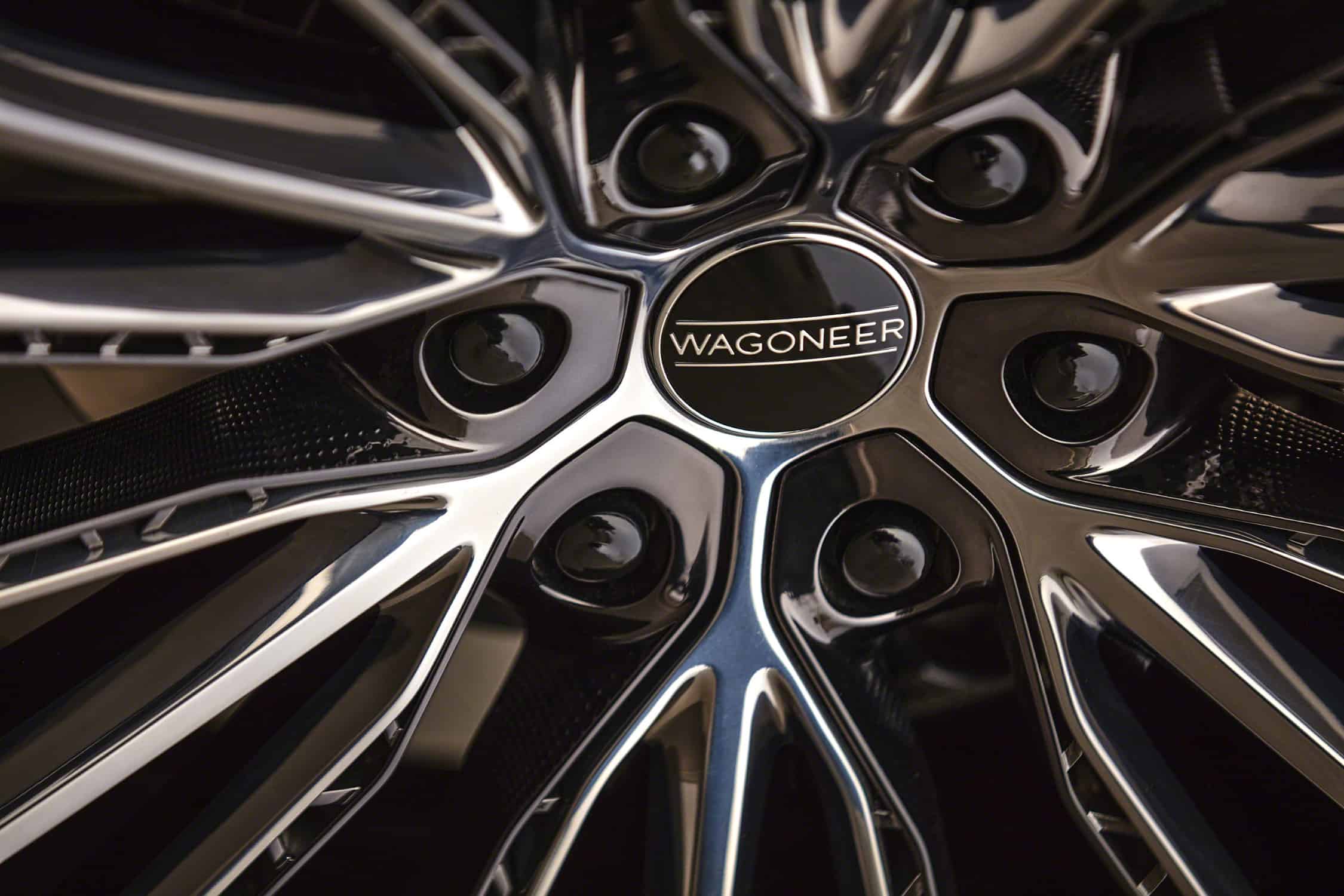 The original Jeep Wagoneer debuted in 1962, and was the first 4WD vehicle to get an automatic transmission. In 1984 the Grand Wagoneer debuted, with more space, more power, and more luxury refinement. The 2021 and beyond Jeep Wagoneer lineup will surely follow a similar model. Although unconfirmed, we’re very sure that there will be two wheelbases on offer, to compete against the likes of the Yukon and Yukon XL. We also confirmed that these vehicles will only come in a 4-door configuration, so sadly there will not be a short-wheelbase 2-door Wagoneer on offer.

While pricing hasn’t been announced yet, we’ve got it on good authority that the Wagoneer will start around $60,000 and the Grand Wagoneer around $100,000. Again, Jeep is trying hard not to cannibalize sales from its current vehicle lineup and reach a more affluent buyer.

The production vehicles have been confirmed to have on offer third-row seating, three 4×4 systems, Quadra-Lift air suspension, independent suspension at all four corners, and “unmatched towing capacity.” The Wagoneer lineup of vehicles will start rolling out of the Warren, Michigan assembly plant in the summer of 2021.

Christian Meunier, Global President of the Jeep brand – FCA, says: “Wagoneer is unquestionably rooted in the legendary Jeep brand and its unmatched heritage of leading capability, authenticity and freedom, and its return allows us to expand to a much more premium arena with new levels of design detail, and advanced safety and technology features. While Jeep vehicles bring leading capability, efficiency and performance across the mainstream SUV market, Wagoneer will ultimately become a portfolio of vehicles that will once again define ‘American Premium,’ making it the standard of sophistication, authenticity and modern mobility.”


Tesla-Powered Range Rover: Behind The Wheel Of ECD's Restomo...
KIA Updates Its Image, Finally, With New Logo And Slogan
The Honda Bulldog: It’s Happening (Apparently)
2020 GMC Jimmy Gets Green Light
The Best of 2021 Rolls-Royce
Ranking the Best and Worst Jeep Models for 2020