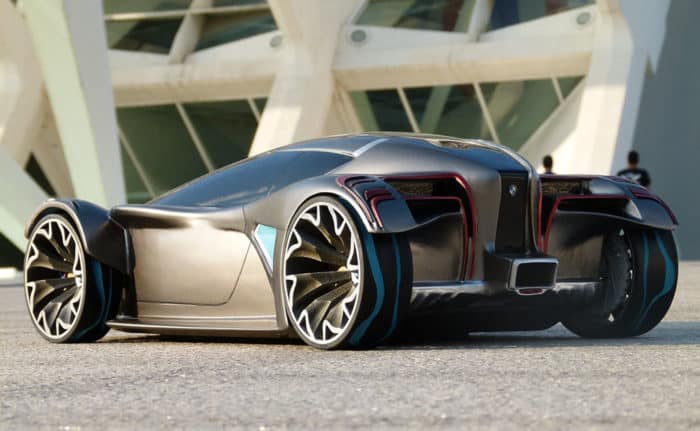 BMW has decided to attack the electric and electric-hybrid vehicle market far more aggressively than that of their European competitors with a new BMW supercar. Of course the CAFÉ standards and shifting public outlook are cause for performance concern when it comes to full petrol burning power so if BMW can succeed in delivering a model like the 2016 BMW i9 that can deliver on “all fronts” then they have a “leg up” in research and development over their competition for future applications.

Those wacky socks and sandal wearing Bavarians have decided to not only surpass their own i8 with a more powerful 3liter 400hp engine in the BMW i9 but also place (speculated) an AWD system with a type of KERS system to regenerate power through braking and give the front wheels 20-30% of the total power output without the assistant of petrol. With the AWD system using a similar SH power placement like the new Acura NSX that places more power to the outside wheel as well as over rotates to assist in traction, we should see skid pad stats that outperform anything we are drifting into ditches today.

Since BMW had managed to infuse a plastic resin with a carbon fiber “like” carbon base means that the company is able to produce lightweight and extra rigid monocoque platforms that lower cost and time rather than say a Pagani Zonda or Huayra full Carbon Kevlar hand laid and autoclaved monocoque (even though Pagani’s are stronger).

With a smaller company like Tesla quickly gaining ground and becoming a brewing storm for other automotive competitors, BMW knows that the future is going to be in either electricity or hydrogen. These companies are doing it right by offering a seemingly over the top vehicle that is unique, powerful and has the ability to appeal to the super rich. This is a good thing, because they are paying top price for technology that will trickle down to your M3/M4 in the next five to seven years. So let the wealthy display their overpriced exotic BMW supercars as well as let them deal with any electrical fires and exploding components. Sure these things are not likely to happen due to the fact that these are not Ferraris we are talking about, but still there is a need for these new breeds of sports cars because we as a whole can profit off of the technology in the years to come. With batteries doubling in life, power, and lessening in recharge time and cost every 5 years means that we will soon be close to owning a vehicle that offers only advantages over compromise.

So what’s the BMW i9 price? Naturally, we’ve got no idea at the moment. However, the current i8 sells for an ungodly $135,000…so whatever the i9 eventually retails for, you can expect it to be north of that figure. Gulp.