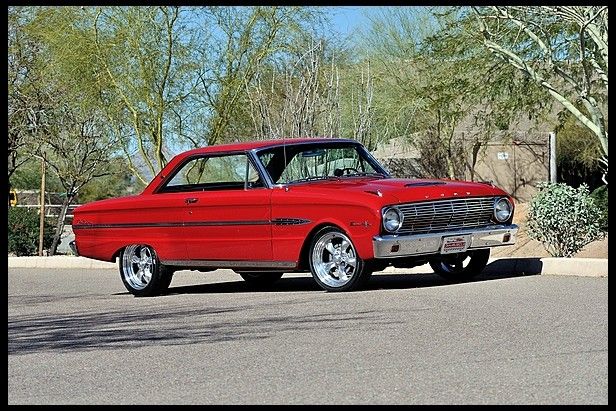 Maybe it’s because the Mustang was based on the Falcon, that the Ford compact always respond well to performance and appearance upgrades. Scroll down to check out these 7.

The Falcon shared its front double-wishbone and coil spring front suspension, steering system, and leaf spring and solid rear axle rear suspension along with its overall length with the Mustang. In fact, the first Mustangs were built in the same Ford Motor Company plant as the Falcon. That’s how closely the first Mustangs were related to the Falcon. 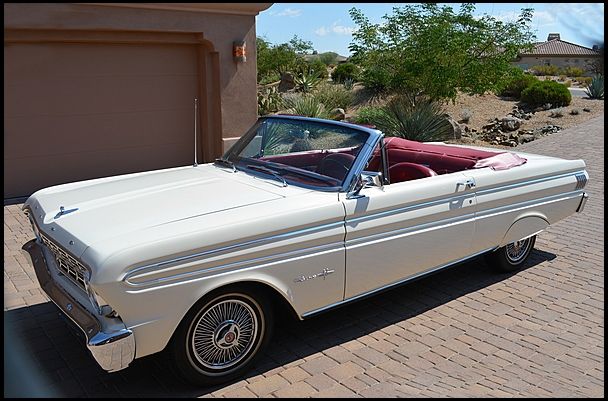 This intrepid builder started with a original 1964 Sprint Coupe and installed a 4.6L DOHC, 32 valve motor from a 1995 Lincoln Mark III (same engine as used in the SVT Cobra but not in as high a state of tune), had a custom intake created which feeds the motor with four Weber downdraft carburetors (just like you’d see on a 289 V8 in an FIA Cobra). Behind the motor is a Cobra-spec T-45 5-speed transmission, power rack and pinion power steering, drilled and slotted front disc brake conversion, 17-inch wheels,  all finished in a gorgeous DuPont Blue Mood paint. 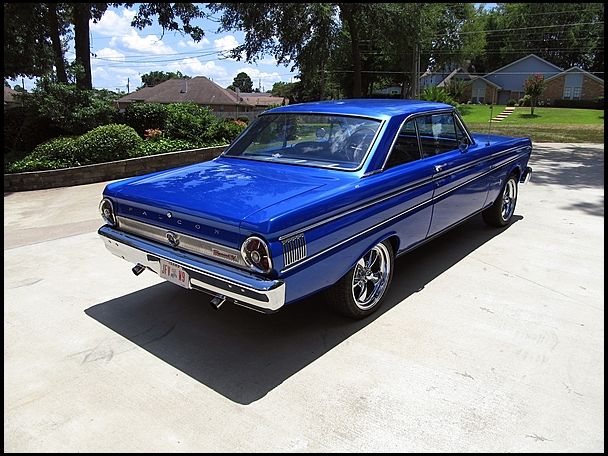 Step back just one year from our previous car and you’re looking at the original, more rounded Falcon design. This car too is a Sprint Coupe that was stripped to bare metal before work began.  The motor was build using some savvy engine builder tricks: it’s a Ford 302 with 351 heads (creating a semi-clone of the Boss 302)  stuffed with Chevy small block 2.02-inch valves. Rocker rockers are working those valves driven by a 278/296 cam. Feeding in the juice is a 750 CFM Holley. Power is driven back by an original  Borg-Warner T-10 four-speed transmission. Brakes have been upgraded to discs all around, while the rear is a Ford 9″ using ladder bars and coilovers to keep it in place, and a 3.55:1 ring and pinion around a Positraction differential turning 38 spline Strange axles to get the power out to the rear wheels.

First introduced in 1961, the Sedan Delivery model was intended for use by small businesses that needed to move light loads between facilities or out to customers. There were just two front doors and the rear tailgate. The entire cargo area was steel panel (no glass) except the tailgate. The owner of this Sedan Delivery updated the engine with a 325 HP 302 Ford small block V8. To add to the driver’s  and passenger’s comfort, front bucket seats with a center console were installed (replacing the stock bench) along with air conditioning. An automatic transmission, power steering, and front disc brakes makes the trip a little easier on the driver. This Sedan Delivery is finished in lustrous coats of high-end copper paint. 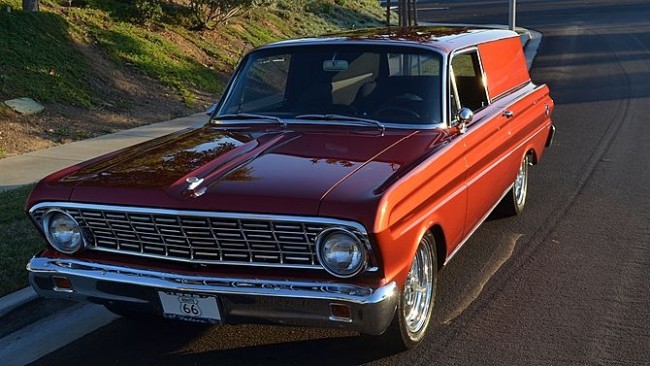 The Ford Falcon was introduced for the 1960 model year, and from the outside this two Door Sedan looks like it’s just time-traveled from the start of the ’60s. But looks are deceiving. This Falcon has a 5.0 L fuel-injected Mustang motor under the hood, backed by a Borg Warner T5 5-speed transmission. The suspension has been upgraded with front and rear anti-roll bars and disc brakes have been installed at all four corners. key an eye out for this blue Falcon at traffic lights. before you engage the driver in a little friendly competition, you may want to make sure you know what you’re up against. 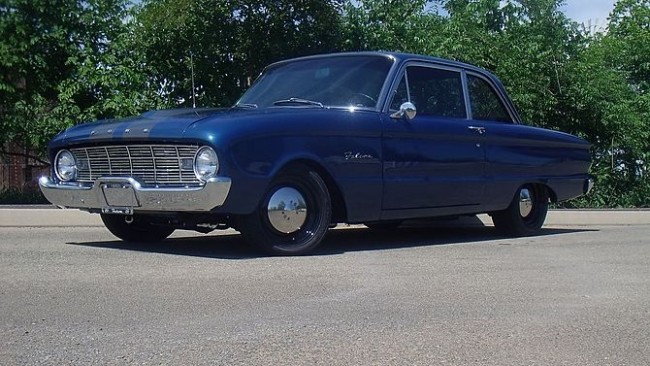 This 1964 Ford Falcon Station Wagon is perhaps more of a “retro-rod” than a Retro Mod, but we wanted to include it because we love the car. The owner has taken the beach theme about as far as possible without becoming obnoxious.  The lime green exterior color set off by the hand-painted lettering set just the right tone. In the interior, the door panel inserts have a bamboo motif (where did they find that?). And, of course, the vintage stickers in the rear window add an air of authenticity. The wagon was upgraded to a 289 V8,  topped by an aluminum manifold and a four-barrel carburetor, which should provide plenty of grunt, with a three-speed manual transmission operated by a floor-mounted shifter. 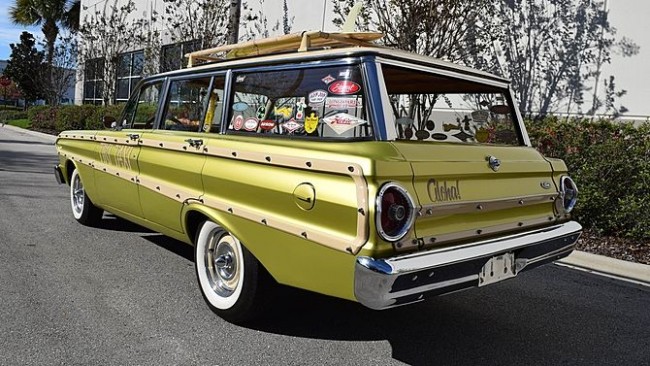 This 1964 has been thoroughly modernized during a frame-off restoration. It starts with a blueprinted 347 CID Ford V8 that pumps out 415 HP, back by a 5-speed transmission that drives to a 8.8 inch rear end. SSBC four piston calipers and rotors have been added at each corner and the suspension has been completely upgraded. The old steering box was tossed in the dumpster and a power rack and pinion unit installed. The finishing touch was lavish coats of Sikkens  “Cool Vanilla” paint. 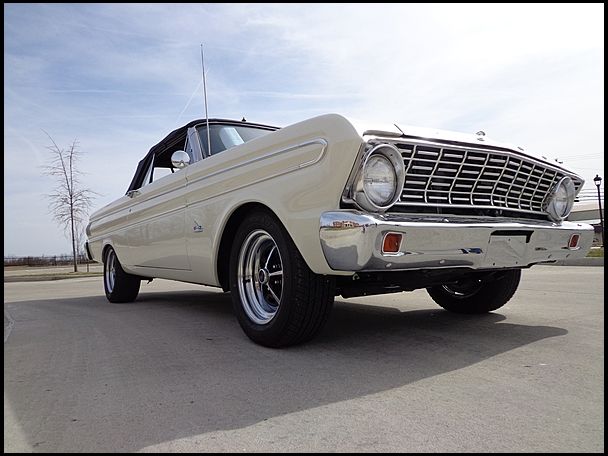 This is “looks can be deceiving” lesson number two. Take one look at this Falcon , with its fender skirts and ornate wheel covers, and you’d guess it’s running a gutless straight six backed by an ancient slushbox. But you already know you’d be wrong because this beauty actually has a 302 CID Ford small block that pumps out 347 hp between the fenders. Among other upgrades include  front disk brakes to bring all those ponies to a halt. You have to admit, it would be kinda fun to sneak up on folks in this car.

The owner started with a rare Sports Futura with bucket seats and kept it in the original Guardsman Blue paint. The engine was updated to a 302 CID Ford small block V8 with Edelbrock carb and manifold and other goodies, backed up by a trusty Ford C4 automatic. The rear end is an 8-inch with a Traction-Lok differential, controlled by a four-link set-up. The front end features a strut conversion along with disc brakes. Rack and pinion steering rounds out of the upgrades. 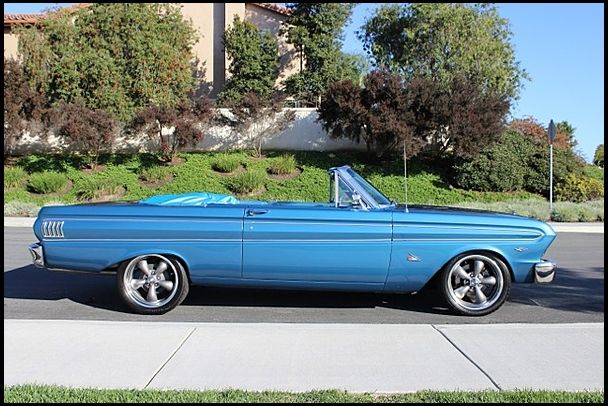