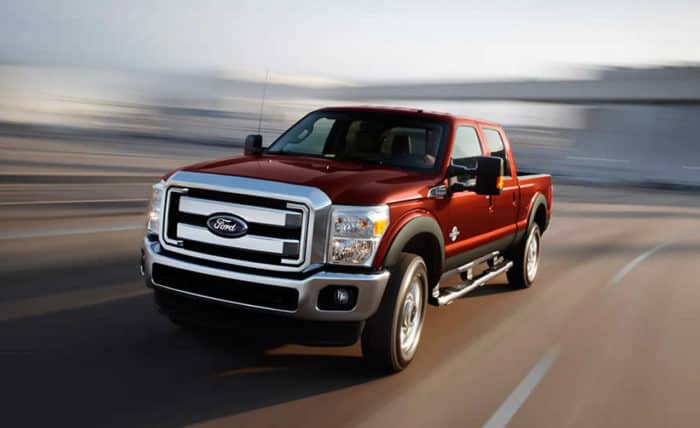 Chevrolet (GMC), Ford and Ram each offer a diesel engine option in versions of their light trucks. All manufacturers claim superiority over the others from different perspectives: maximum horsepower, maximum torque, best in-class horsepower, best in-class torque, 0 – 60 acceleration times, 1/4 mile times, fuel economy, and on. Each of the three diesels are excellent engines, well-engineered, reliable, powerful, and a significant improvement upon their somewhat less impressive predecessors. Let’s take a look at each of these engines individually and then we’ll share with you, based on our research,  our choice of the best light truck diesel engine available. 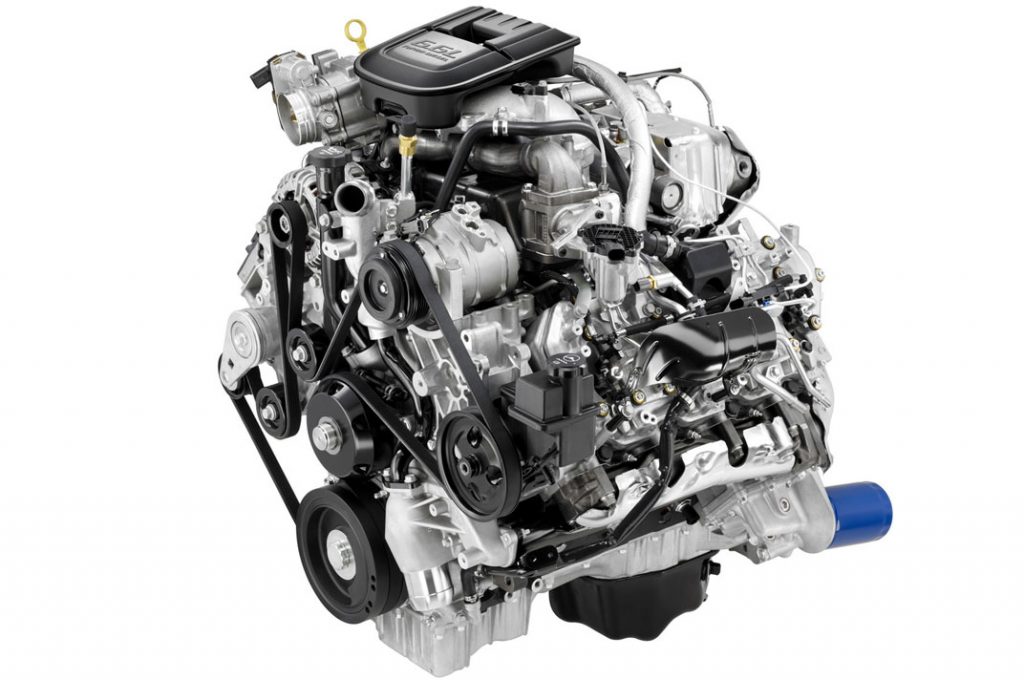 In 1998, General Motors and Isuzu (which has for years designed and manufactured diesel engines for truck, marine, generator, and other industrial applications) joined forces to develop the first high-pressure common-rail, direct-injection diesel engine in the United States. This engine, the aluminum-headed 6.6L Duramax V-8 hit the market in 2001 with a very impressive 300 horsepower and 520 lb-ft of torque, a vast improvement over GM’s unimpressive line of Detroit Diesel engines that preceded it.

The current version of the Duramax, known as the LML, produces 397 horsepower and 765 lb-ft of torque. Upgrades to the latest specification include the use of super-fast-reacting piezo-controlled injectors (which are capable of multiple injections per cycle for optimal combustion), along with a B20 rating, allowing owners to use fuel blends with up to 20 percent biodiesel without voiding their warranty or risking damage to the engine or fuel system. 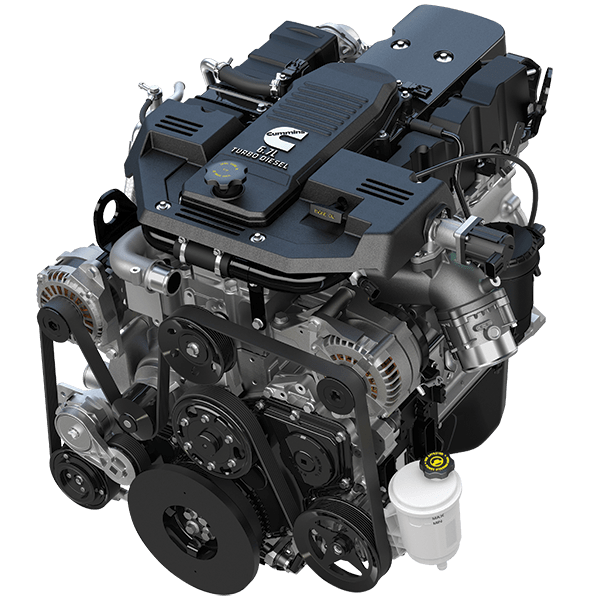 In 1989, as has almost been the case, Dodge had considerably fewer resources to develop an in-house diesel engine. Instead of an expensive, and risky, internal investment, why not purchase from an outside supplier? And what could be a better choice than Cummins B Series engines? After all, Cummins’ reputation as a manufacturer of diesel engines stretched back to 1933, and that a Cummins diesel engine qualified on the pole for the 1952 Indy 500. Instant credibility and sales increases for Dodge.

When launched, the long stroke inline six cylinder B-Series was rated at 160 horsepower and 400 lb.-ft. of peak torque,  more than the V-8 rivals from GM (246 ft. lbs.) or Ford (345 ft. lbs.) but less than half the numbers for today’s High-Output 6.7-liter Cummins turbo diesel.

The 6.7-liter Cummins Turbo Diesel I-6 is available in three versions for Ram trucks. The lowest-powered is paired with Ram’s six-speed manual transmission, which delivers 350 horsepower at 2,800 rpm and 660 lb.-ft. of torque at 1,400 rpm. The second option matches the Cummins to the Chrysler six-speed automatic for 370 horsepower at 2,800 rpm with 800 lb.-ft. of torque at 1,600 rpm. Third, the Cummins 6.7L High-Output Turbo Diesel is paired with the relatively new, very slick Aisin six-speed automatic transmission, pushing out 385 horsepower at 2,800 rpm, the most powerful Cummins generates best-in-class torque of 865 lb.-ft. at 1,700 rpm 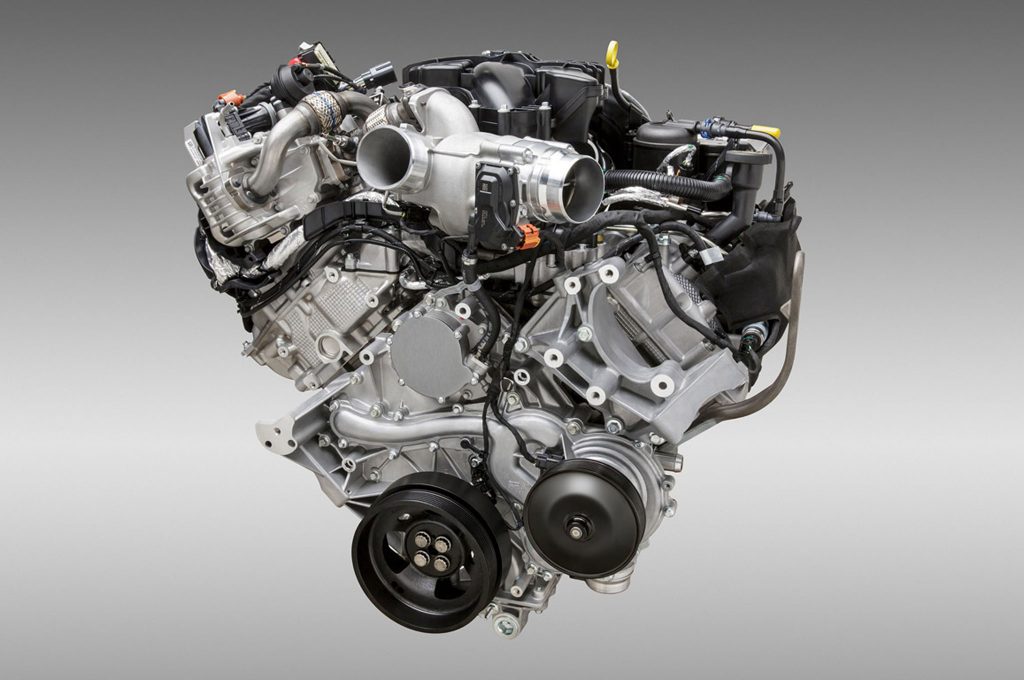 Like Dodge, Ford initially purchased and co-developed diesel engines with the company known to most as either International Harvester or Navistar (depending upon the year). The partnership begin in 1983 with a 170 horsepower, 315 ft-lb 6.9L V-8 and ended with a 6.4L, that while a good performer, offered terrible fuel mileage. What really damaged the relationship and drove Ford to an in-house solution was the 6.0L engine which was so problematic several hundred trucks required engine replacement.

The all-new Power Stroke V-8 engine, developed alongside AVL, an outside engineering firm, made its debut in 2011 models. The upgraded 2015 6.7L Power Stroke engine produces 440 horsepower and 860 lb.-ft. of standard torque, an increase over the earlier version. Changes include a larger turbocharger with larger compressor vanes, high-pressure common-rail fuel injection system that delivers up to five injections per combustion cycle for optimum throttle response and fuel efficiency, and full B20 capability.

And the winner is … 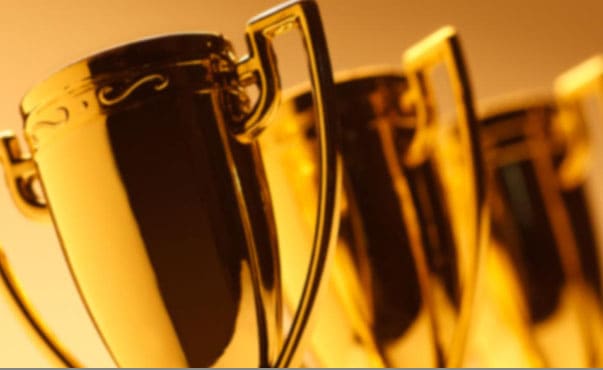 First we all have to agree upon upon something: the primary reason that an individual should purchase a diesel engine for a light truck is the incremental torque generated by a diesel over a conventional gasoline engine. Agreed?
Individuals may have their own specific reasons for selecting a diesel, but to us, this is the number one (but certainly not the only) criteria by which we judge these three engines.
The enormous torque that diesel engines are capable of producing begins with the actual combustion process. A diesel engine produces a slower, more steady burn than the more explosive combustion in a gasoline engine. In turn, this steady combustion allows for use of long connecting rods (stroke) which create a greater lever arm on the crankshaft, and voila, there’s your torque advantage.
The predominance of light and heavy truck diesel engines in the world are of inline six cylinder configuration. This design is selected for a number of reasons, among those the ability to accommodate long connecting rods inside the crankcase.
Where diesel V-8 engines have in the past fallen short against straight six cylinder designs of the same capacity  is in torque,  as designers have found it difficult to accommodate a long connecting rod  within a V-8 engine architecture. Until now. 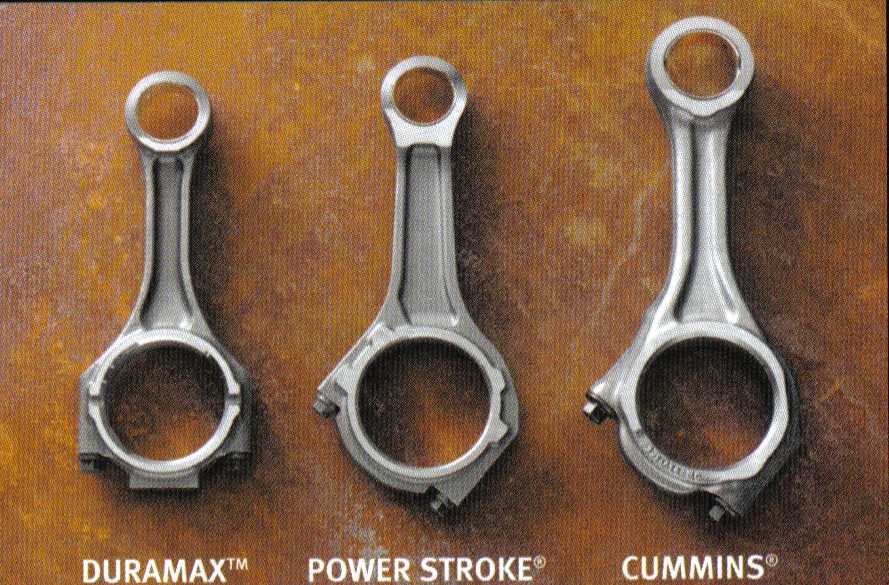 When comparing rod lengths between the current Duramax, Power Stroke, and Cummins engines, it’s immediately apparent that Ford has been able to design its V-8 with 4.25″ long connecting rods close to the length of the 4.88″ Cummins rods. The result is that the Power Stroke delivers just 5 ft-lbs of torque less than the Cummins, about the output of a cordless drill. The Duramax rods, by comparison, create a 3.90″ stroke. 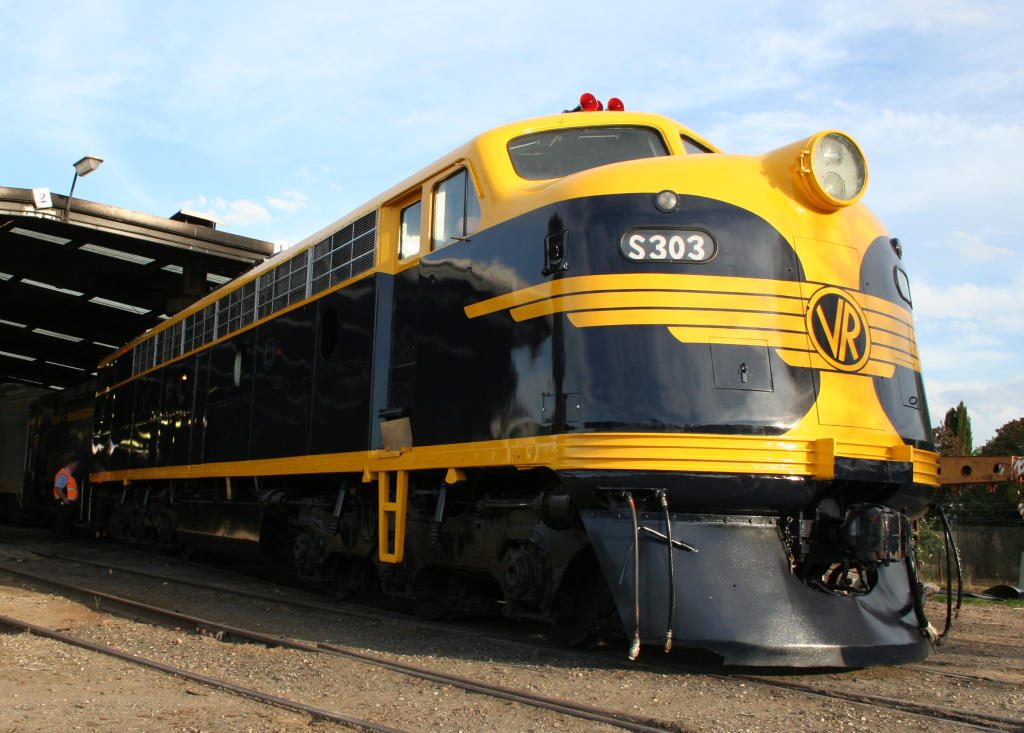 But as I mentioned, while torque was the primary measure, it wasn’t the only criteria by which we’re judging these engines. The engine produces the greatest amount of horsepower of the three, which in this case is actually a better measure of the engine’s flexibility in real-world driving conditions. Combining the pulling torque of the Power Stroke with the heavily reinforced F-450 chassis provides a class leading towing capacity of 31,200 pounds,
As I mentioned there are many reasons why someone would want to purchase a light truck with a diesel engine, but for our money the best choice is clear: the Ford 6.7L Power Stroke V8 Turbo Diesel Engine. 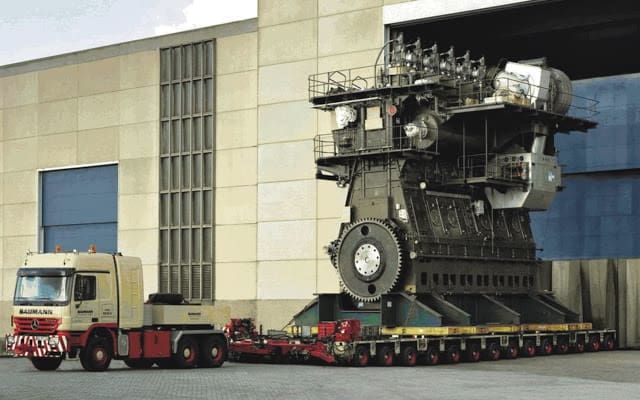 This is the 6-cylinder version of the RT-Flex96C. Imagine another 8 cylinders added to its length!

The Wärtsilä RT-flex96C is a two-stroke low-speed diesel engine designed for use in large container ships. The largest 14-cylinder version is 44 feet high, 87 feet long, weighs over 4.5 million pounds. The massive diesel generates 107,390 horsepower and 5,608,310 ft-lbs of torque (at 104 rpm!).  With a 38 inch bore and an 8.2 foot stroke, a full grown man could easily hide in one of the cylinders. Now THIS is truly the king of the diesels!


How To Install Air Bags For Better Towing With Your Pickup
The Best of 2021 Ferrari
50 of the Coolest and Probably the Best Trucks and SUVs Ever...
A Cool $5.7-Million Will Buy You The DB5 Vantage Icons Colle...
Best of 2019 Hyundai Lineup
Ken Block Ford F-150 RaptorTRAX Is The Ultimate Toy For A Gr...