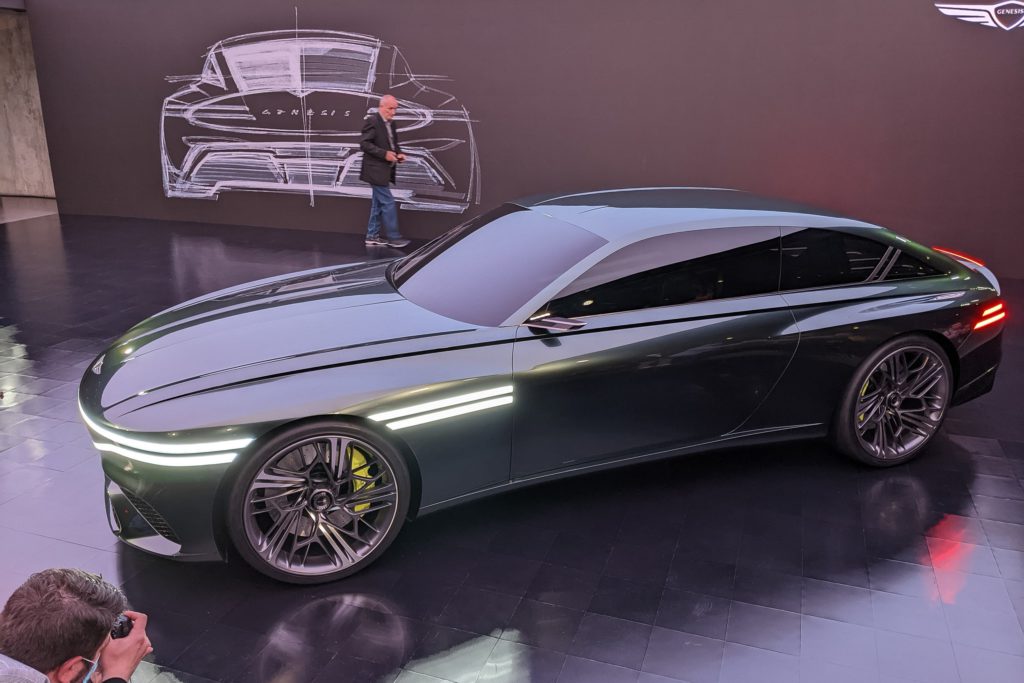 Genesis has managed to move from an aspiration to a legitimate luxury automaker in just a handful of years. Beautiful designs have been a big part of that, under the direction of Chief Creative Officer Luc Donkerwolke.

Crafting stunning designs means they are constantly sketching out new ideas. The best of those make the jump from paper to computer and then to metal. Like this, the Genesis X Speedium Coupe concept, a glorious Kamm-tail electric coupe.

We got to see the end result as well as hear from Donkerwolke himself the process behind the idea for the car and how it came into existence.

Speedium Coupe Inspired By the Racetrack

The Speedium name comes from a racetrack in the Korean city of Inje. Designer Donkerwolke speaks fondly of his on-track time as a racer. That there is more than a little Shelby Daytona coupe in the Kamm-tail rear styling is not a coincidence.

More than just the dramatic tail, the Genesis X Speedium Coupe is a glimpse forward at what the next generation of Genesis EVs could look like.

“This car is an open-door moment in Genesis’ journey towards our future EV design. This isn’t a show car — it’s a look into our design processes as we explore ideas for the next wave of EVs, one that incorporates Genesis’ DNA,” Donkerwolke said.

Latest in a Line of Genesis Concepts

Genesis has done concept cars before. The vehicles that followed those concepts into production have been remarkably faithful to the concepts, too. But they work especially well to showcase small parts of what Genesis design has coming.

Take the Essentia concept of 2018. A futuristic hypercar shape, it could never have seen production. The two line lights, front and rear, however, did. The twin light signature continues to be a centerpoint of the company’s design language.

Or the Mint concept. An EV from 2019 that previewed a more spacious interior design experience. The production GV60 took some of the overall shape outside. It also came with an interior that learned lessons from the Mint.

The point of this one then?

It’s still the two-line lights. Donkerwolke and his team were looking at the natural extension of those lights. To diverge and create the Genesis Crest Grille without the steel and brightwork you find on their internal combustion vehicles.

“It carries an EV face that symbolizes Genesis’ transformation towards becoming an all-electric car brand,” says the company. The first Genesis EV, the GV60, won’t wear the nose. But the rest of the six-model electric lineup expected by 2030 probably will.

The new vehicles won’t have a face identical to the Genesis X Speedium Coupe. Or to each other. Donkerwolke calls that a decision the company made very early on in its development

“We decided from the very beginning that Genesis will not be a brand which will have a family design the same way applied to each. Each model will be tailored for the customer And for the specific market we want to target. So don’t expect this to [be] scaled down in different [propulsion] technologies and architectures. Each car will have its own specific [face] but this will be the essence.”

There is more to look at than just the new lights and the Kamm tail. The V-shape brake light on the spoiler is meant to interrupt the circular shape of the rest of the tail. Donkerwolke says that the purpose is “about orchestrating the elements so that they complement and respect one another.”

The former Lamborghini, Audi, and Bentley designer gave us a rare look into the fascinating process that can end with concept vehicles like this. Or end with a digital sketch in the Genesis virtual trash can.

“We start off with rough sketches. Quick ideas on paper. Visions that can be explored. Sketches that only matter to us.”

The executive spoke about the digital environment that allows Genesis to move quickly and work on designs from anywhere. That all plays a part in vehicles like this Genesis X Speedium Coupe Concept.

“This is a process that saves time and resources. It is more sustainable and it reduces costs. We can see multiple variations of a car before we even create a full-size [model]. And even then, we reduce the number of full-size models we actually create. Because of this digital process, we were able to create data and run it through digital simulations. We piece all of the ideas to get on the model. Internally between us, we call this a Frankenstein.

“It’s not beautiful. We do forms, surfaces. We stitch them together and create a 3d monster. Then we break them. The surfaces will change, the proportions will. We let design accidents happen. I love design accidents. Sometimes accepting something that went out of control is surprising and brings you new ideas.

“Next step is we mill that monster. Make it into a full-size model and start observing as it grows. And once we have a physical property, then there’s another relation that starts. Like Dr. Jekyll and Mr. Hyde. Two sides of the car evolve. We decide to let beauty prevail, but it was born out of a creative chaos.”

Donkerwolke said that his team will do more than 100 of these exercises in a year. Few make it to physical form and even those are not normally shown to the public. It makes the Genesis X Speedium Coupe Concept a big deal, and we can’t wait to see the result on the road.


10 Great and Affordable Used V12 Powered Cars
The Best Toyota Models for 2020
The Best 2020 Buick Models
Top 10 Best Used Cars Under 1500
The SOTV-B is the Toughest Pickup in the World and it's Made...
Seven of the Weirdest Cars That Hollywood Celebs Drive