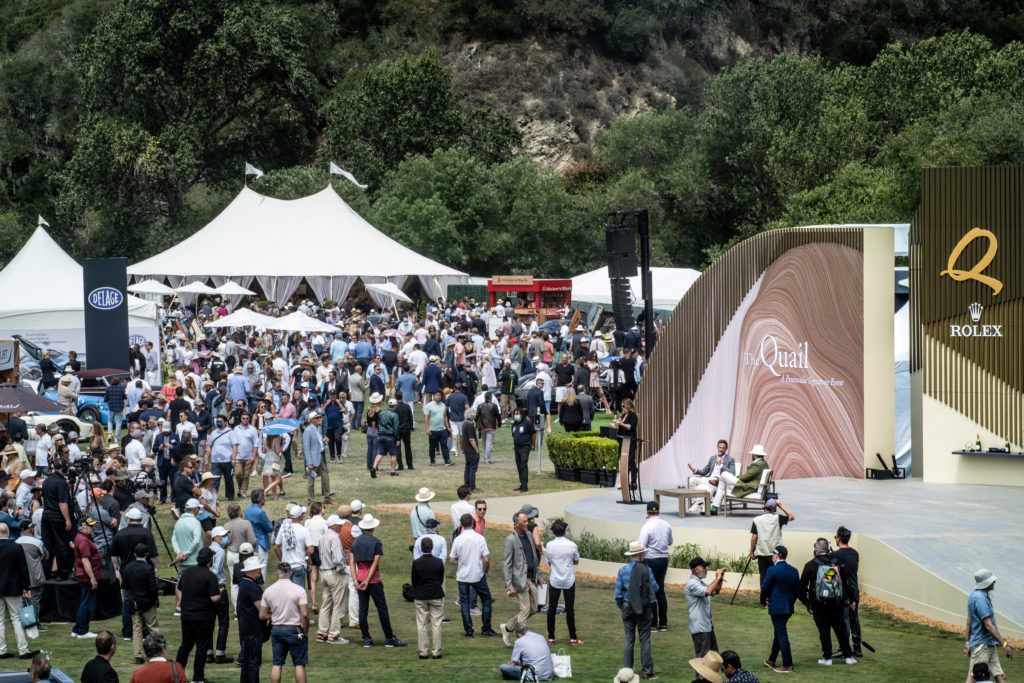 As a first-timer to the hyper-affluent Monterey Car Week, the simple task of figuring out which auctions to attend, and which parties to go to can be incredibly overwhelming. There’s a seemingly endless number of events that woo potential attendees with everything from tours of private jets (for those in the market) to private dinners with the rich and famous of the motorsports world. After a few weeks of planning, and a slightly worn-out liver checking out these events, AutoWise is here to give you the scoop on our favorite event of the 2021 Monterey Car Week, and an event we’ll strive to attend each year. After all, when there’s free champagne and caviar circling around one of the world’s finest collections of automobiles, what’s not to love?

Twelve-dollar boiled hot dogs and thirty-seven-dollar Coors Lights are the mainstays of the typical automotive event, but The Quail, a Motorsports Gathering offers a dining experience that’s unmatched by any event I’ve attended, regardless of its focus or industry. With five distinct dining pavilions, which change yearly, the Peninsula Signature Events group manages to bring quality and ambiance that’s virtually unheard of elsewhere. Whether you’re sipping on wonderful Sangria at the Spanish Tapas tent, or drinking Ouzo while feasting on delectable grilled lamb in the Greek pavilion, even foodies such as ourselves were impressed.

You might be curious as to why we’ve gone straight into the food at an automotive site, covering an automotive event—well that’s because it’s simply that exceptional. We dined our way around the world at this year’s Quail—with our favorite being the Parisian-inspired tent serving a delightful poached salmon. Each themed pavilion featured live entertainment, complemented by a full waitstaff to attend to your every need. My only complaint? Don’t underestimate the crossover between bespoke automobiles and good food—add some additional seating options for those looking to grab a quick bite in-between gawking at automobiles.

Beyond the dining pavilions, vendors and sponsors set up their own experiences—and we couldn’t help but enjoy the fresh oysters, champagne, and caviar sponsored by Road & Track. Yes, it’s all included in the entry. No one that crosses the threshold of the The Quail, a Motorsports Gathering is asked for a single cent once they’re inside; and despite the $925 ticket price, there’s so much value that I didn’t hear a single complaint. This crowd has no problem paying for an experience, and The Peninsula offers just that.

We’ll start by saying that automobiles do not mix with alcohol—never drive drunk—there’s simply no excuse in today’s Uber world. With that being said, there surely must have been quite a few Lamborghinis spending the night on the Quail’s greens (which are a car-show in their own right) as there was simply no way to get around the fact that the event did in-fact run out of champagne, going through what must have been an entire truckload of Laurent-Perrier by the 4PM close of festivities. Additionally, each food pavilion served unique, fascinating cocktails inspired by the countries represented.

Forgive my blunt assessment, but I’ve never seen such a gathering of ultra-high net worth individuals in my life, and automotive manufacturers have clearly cottoned-on to this reality as well, with companies such as Lamborghini, Bugatti, and Guntherwerks all launching hyper-exclusive variants of their already hyper-exclusive vehicles. You’d be forgiven for not even knowing that some of these vehicles exist, but for those that want more than the standard Bugatti offers, at this year’s Quail, the German motorcar manufacturer who masquerades as if they were actually French, launched the Bolide—Bugatti’s most-exclusive and highest-performing model yet, in North America with prices starting at just over $4.5-million.

Stephan Winkelmann, CEO of Lamborghini, was on hand to re-introduce the all-new Countach to the world at the Quail. Based on the styling of their iconic model which debuted in 1974, the re-imagined Countach is based on the Sant’Agata Bolognese company’s Sian and is already sold out. Lamborghini apparently offered pre-sales of the model discretely to savvy brand aficionados with whom they share a long-standing relationship with in the days prior to launch. We wouldn’t be surprised if the remaining Countach allocations were scooped up at The Quail itself, where the throw-back model dominated the hearts and minds of event-goers.

Our take? With Lamborghini’s incredibly strong design language that simply can’t be mistaken for any other marque, the all-new Countach is hard to differentiate from the brand’s other models, aside from its square-ish headlights. And oh yeah, where’s the wing?

This author’s particular favorite new vehicle reveal from The Quail was Guntherwerks’ 993-inspired Speedster Remastered. Weighing in at a scant 2,600 pounds and re-bodied in carbon fiber with a Porsche-derived 4.0L flat-six engine producing 435 naturally aspirated horsepower, it isn’t the most powerful car launched at the Quail, but it might be the one with the most soul.

The Guntherwerks Speedster Remastered will be limited to 25 commissions with a starting price of $525,000 before bespoke options are added. For a Porsche air-cooled enthusiast, the generation upon which this creation is based, the 993, is the last air-cooled model Porsche produced, ending its production in 1998. These models are known for their analog driving experience and unique driving characteristics.

Meyers Manx Relaunches At The Quail

Truly an American icon, and perhaps the most fun you can have on four wheels, The Quail marked the re-launch of Meyers Manx brand by a team of dedicated automotive enthusiasts who are no stranger to the world of car collecting. It’s simply wonderful to see a fun-loving brand included amongst the high-performance and over-the-top luxury that dominated the remainder of the event. Extra points go to their Manx Air-branded Albatros seaplane that began the event with its spectacular low-elevation flyover.

Based on a bespoke fiberglass chassis, the Manx buggy relies on time-tested components from the equally fun-loving classic air-cooled Volkswagen Beetle. Prospective owners can either purchase a kit and acquire the parts needed for a conversion on their own (perfect if you’ve been able to secure a donor VW, or Manx can assemble a turn-key vehicle for you out of their San Diego-based factory).

The Outrageous and The Wonderful 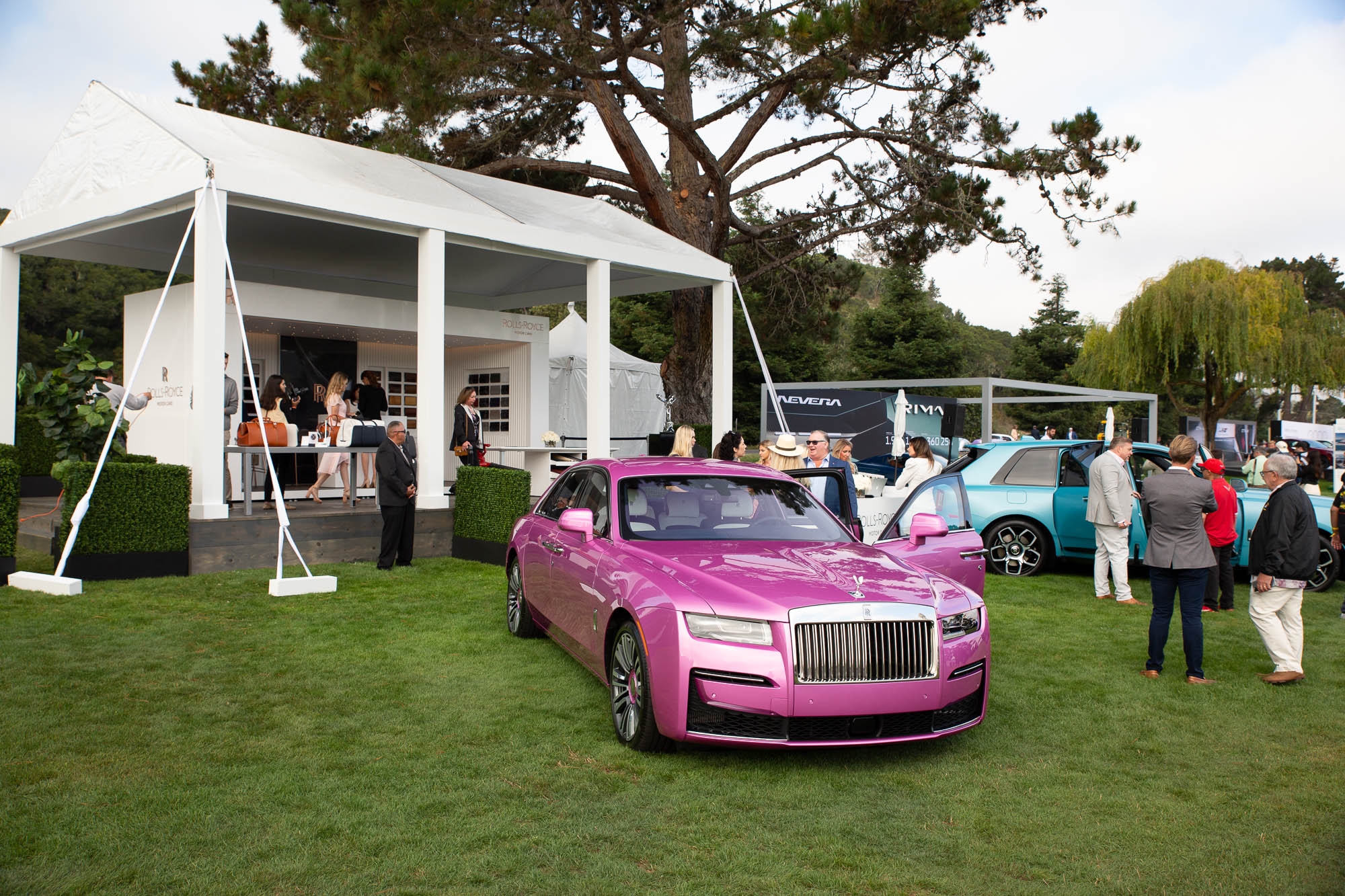 The beauty of The Quail was the eclectic selection of automobiles on display, including this 2021 Rolls-Royce Ghost outfitted in the appropriately-named Friskee Pink with a bespoke navy blue and arctic white leather interior and is accented by a new Rolls-Royce exclusive leather hue, Shieda to match the exterior color. It should come as no surprise that this Ghost went home with a lucky Quail attendee who simply couldn’t live without it.

Revamped just the year prior in 2020, the Ghost represents the most successful and driver-focused four-door automobile in the Rolls-Royce lineup and features class-leading technology such as a satellite aided transmission and their innovative Flagbearer suspension management system to ensure its occupants are as comfortable as you’d expect.

Each year, The Quail, a Motorsports Gathering, highlights special classes of automobiles that hold significance in design, one of this year’s three categories is the emphatically under-rated Alfa Romeo Montreal. Styled by the talented Marcello Gandini at Bertone (whose other creations include the Lamborghini Miura and Countach, as well as the iconic Lancia Stratos) and produced from 1970-77, the Montreal is finally beginning to get some of the respect it deserves.

The show-winning example owned by Joe Tseng of California is cloaked in Arancia, which in my humble opinion is the vehicle’s most desirable paint code as it clearly displays the Montreal’s defining features, such as its partially-covered headlamps and distinctive side vents.

Perhaps the most iconic vintage 4WD racecar, Big Oly, a 1969 Ford Bronco outfitted and famously driven by Parnelli Jones, won the Hagerty Drivers Foundation & Preservation Award. Recently acquired by noted-collector and Meyers Manx investor Philip Sarofim, we’re told that Big Oly is no stranger to actually being driven and used on a regular basis. As someone who is a particularly keen off-road enthusiast, it was a highlight of the event to see a vintage 4WD roll across the stage at The Quail—which goes to show the breadth of enthusiasm catered to at this event.

Inspired Steve McQueen’s iconic Baja Boot which he piloted in the 1969 Baja 1000 alongside contemporary “Big Oly,” this particular machine has been reimagined by Scuderia Glickenhaus and took place in the 2019 Baja 1000, winning top rank in Class 2 that year. Owned by noted Ferrari collector and racer, the Baja Boot features a 460 hp dry-sump race-spec engine and 37-inch tires with plenty of suspension travel to keep you busy behind the wheel. With a starting price of $258,750, the Baja Boot can additionally be optioned with a 650-HP LT4 engine and 39-inch BFG race-spec tires.

A collaboration between Lotus and the Radford Team, whose principals include F1 World Champion Jensen Button, TV personality Ant Antstead and designer Mark Stubbs, the Radford Type 62-2 brings forth a dream combination of styling, dynamics, and expert driver input to create a modern vehicle like no other. This particular Quail edition that launched for the show features additional aerodynamic styling elements, carbon-fiber wheels and carbon-ceramic brakes for less rotating mass, which in turn improves handling. It’s great to see this dream team come together on a project that looks incredibly promising. A sports car made for drivers, by drivers.

Should You Attend The Quail, A Motorsports Gathering?

The Quail combines all that’s great about Car Week, it’s excessive, it’s friendly, and it’s an experience. There are so many elements to this event that it’s almost hard to explain, with each one of them standing on their own accord.

Compared to the Pebble Beach Concourse, the Quail is smaller, more intimate, and frankly just better in my opinion if you’re not interested in the nuts-and-bolts of pre-war automobiles. Several of the top vehicles at the Concourse were also displayed at The Quail, where you were in a much more personal environment to enjoy the lifestyle of the automotive world.

I’ll be putting it on my list of events to attend, and if you’re on a time schedule that doesn’t permit an entire week in Monterey, it’s worth attending The Quail, a Motorsports Gathering as a singular event that encompasses the best of the best of Car Week.

Get your tickets to The Quail HERE.

Matthew is a leading expert in automotive adventure. He has extensively explored the world's most remote places by 4WD and is considered an industry authority on overland travel. He is the only American to ever become an editor of a major Australian 4WD publication and has over 15 years of competitive auto racing experience