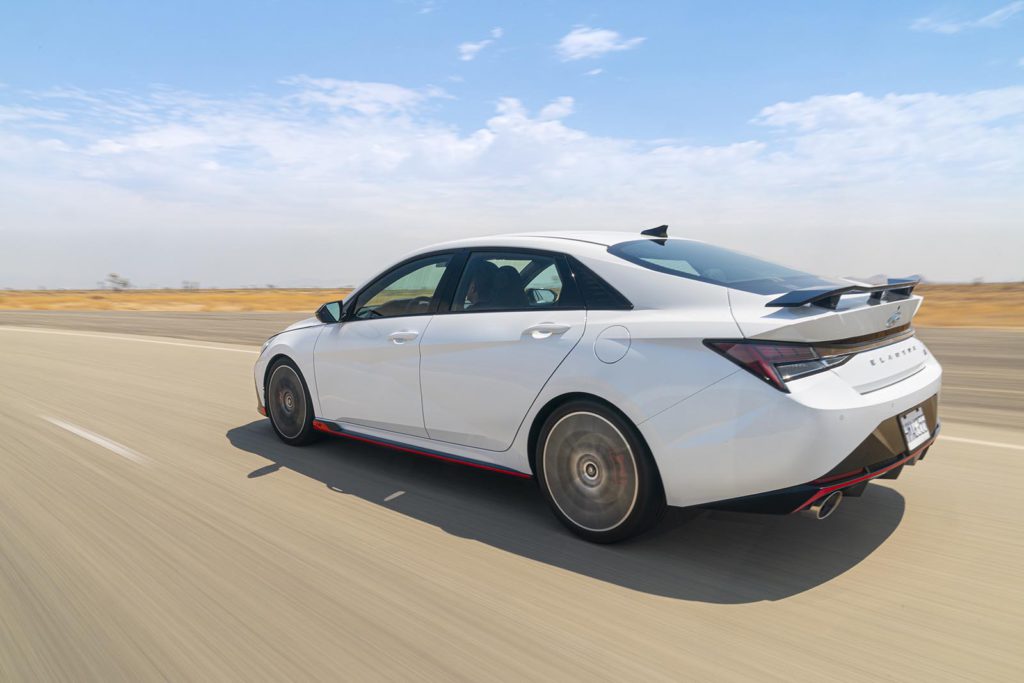 Tap the Start button and the engine responds with a guttural burble, seemingly anxious to shift into gear. I certainly wouldn’t want to disappoint and so, as soon as I cinch my seatbelt and check the mirrors, I put the car into “D” and launch myself down Skyline Drive.

For those who still think of Hyundai as a bargain brand, the new, 2022 Elantra N is likely to come as a big surprise. In recent years, the Korean carmaker has been stepping up its performance game and the new sedan, which was formally unveiled this past week, is the latest example. 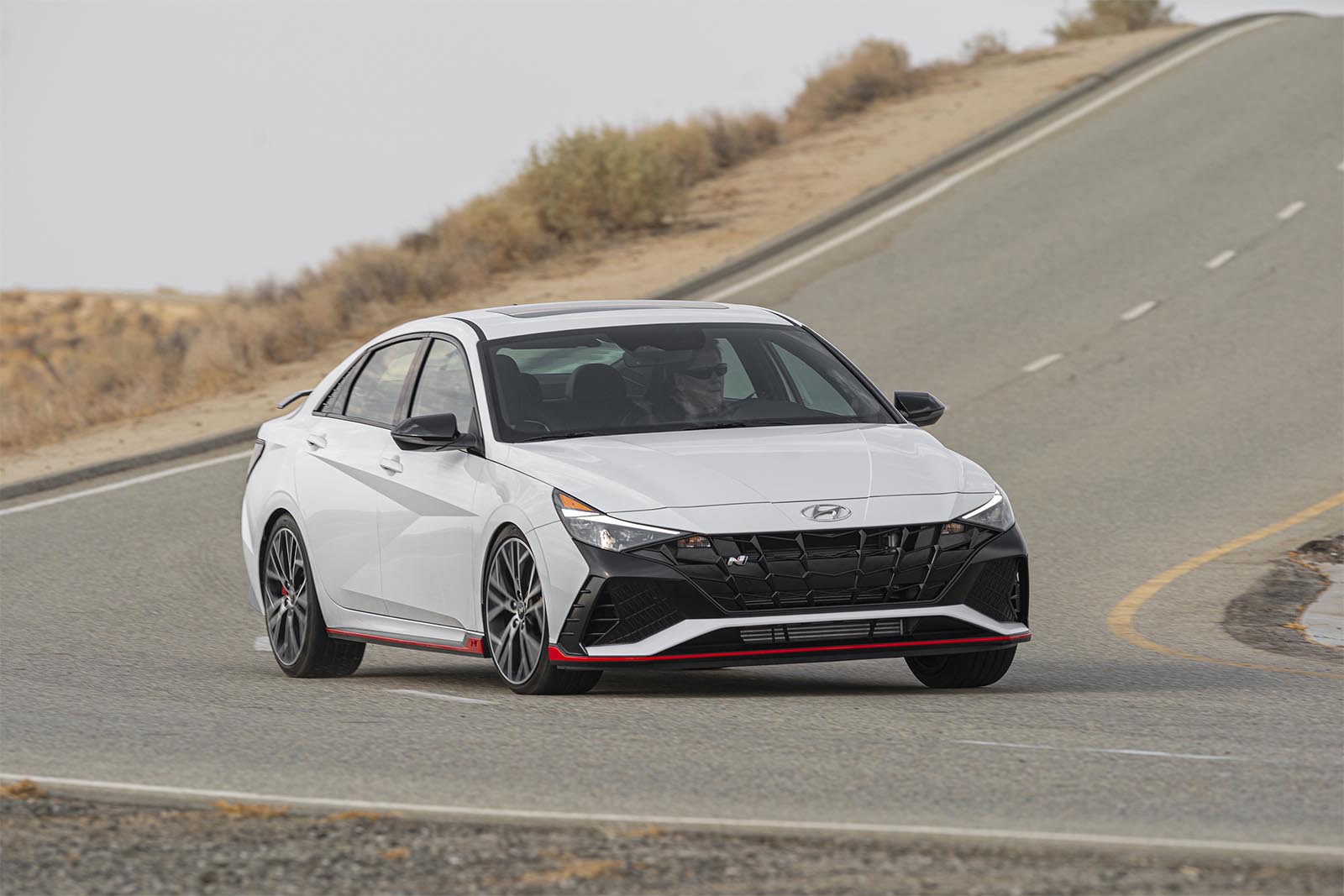 Borrowing a page from more upscale German brands like BMW and Mercedes-Benz, Hyundai takes a two-step approach to performance – one that can be confusing to the uninitiated. Moving up from base trim, you get the new N Line models that offer more sporty appearance details and, in some instances, improvements to power and handling.

With N models, like the new Elantra, you get a sort of automotive Jekyll-and-Hyde. It can deliver track levels of performance in N Mode, while comfortably handling everyday chores and commutes when dialed back to “Comfort.” 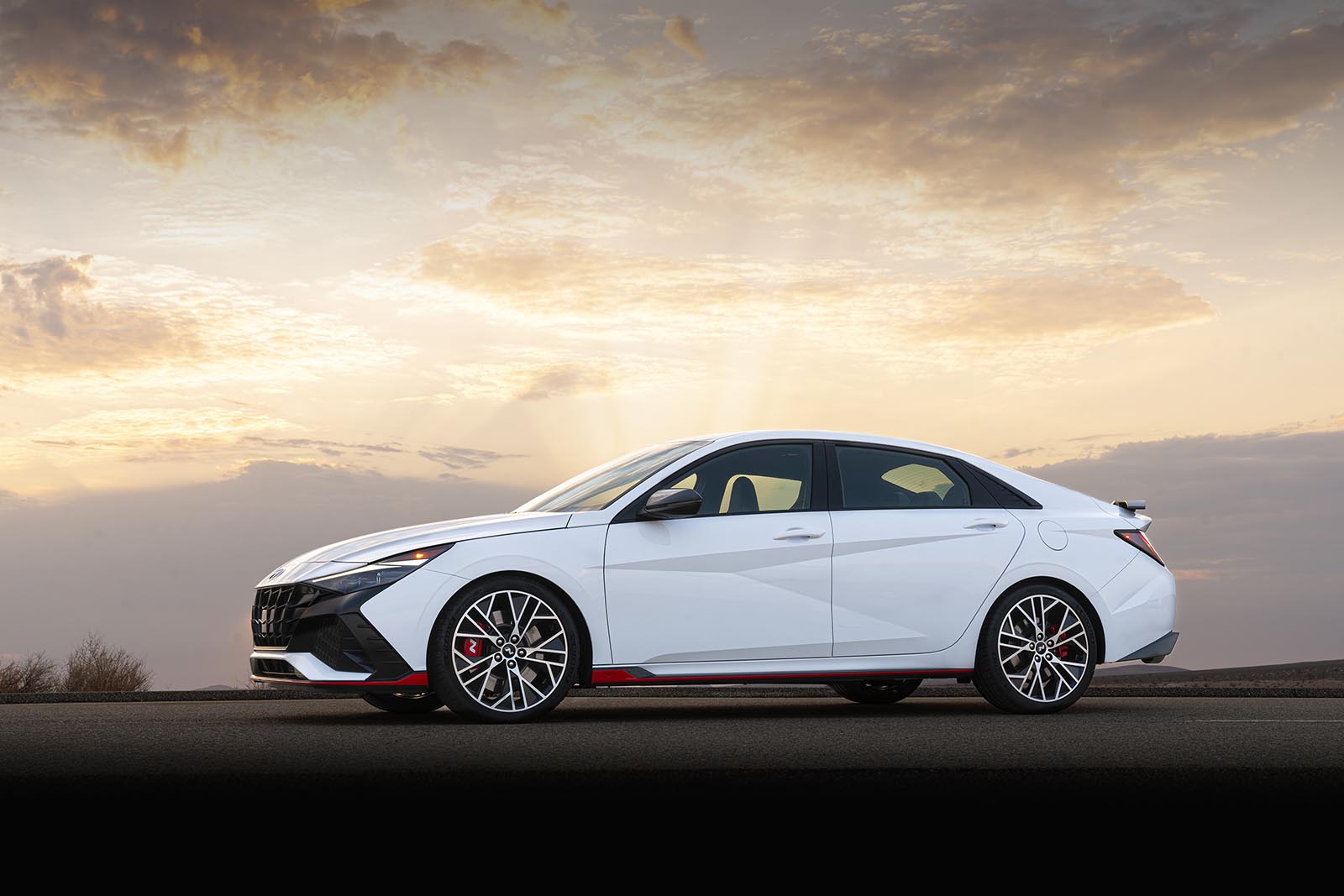 During a trip to San Francisco’s South Bay area I didn’t have much time behind the wheel, so I’m determined to focus on the beast side of the new Elantra N. And, as I pull out onto the winding, two-lane blacktop, I slam the throttle, the tires issuing a satisfying screech. There’s no question the new N model is quick, but I’ve not yet gotten everything it offers, so I goose the turbocharged 2.0L engine by tapping the big “N” button on the steering wheel. The sedan takes off like a cheetah spotting prey, as I sink deep into the well-bolstered sport seat. 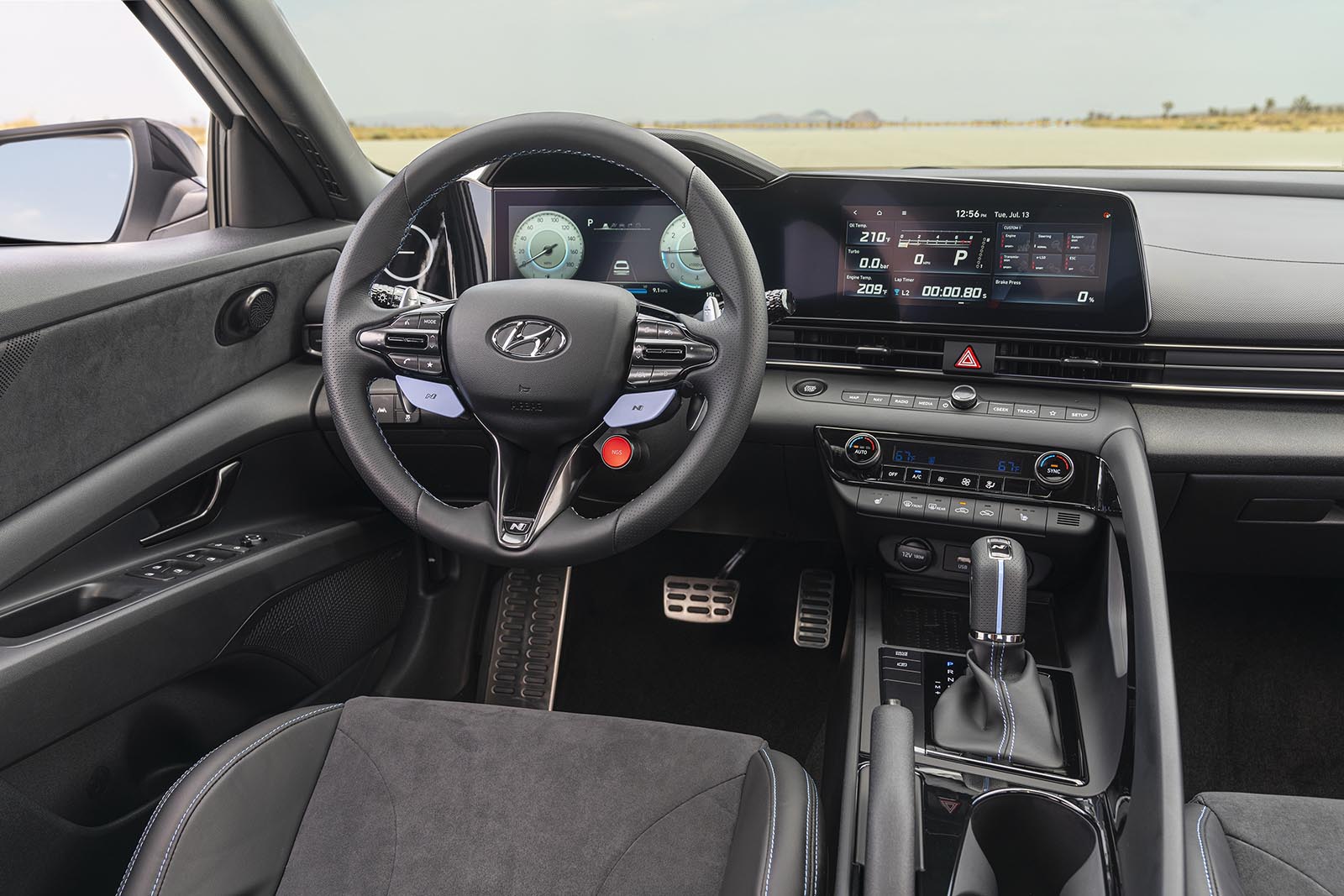 In the right vehicle, Skyline Drive can be a delight to drive, but it does pose plenty of challenges, with tight blind curves and pavement that’s often broken and frequently off-camber. Those are perfect conditions for testing out the new Elantra N, however. The good news is that it’s more than a straight-line sled. It’s adaptive damping system hunkers down as I wind around the corners. It does beat you up a bit on the rougher pavement, but it provides a sense of confidence that, with each passing mile, increases.

Even as I overcook a corner, the chassis retains its pose, letting me quickly correct and squirt out the other side. As I turn around and head back to base, I have a chance to check out the brakes. They’re grippy enough to give you a nose bleed. And, if Hyundai’s PR team is to be believed, you can stand on them over and over while logging track laps without worrying about fade.

With the 2022 Hyundai Elantra N, you get a big boost in numbers over the base package which starts out at a mere 147-horsepower. The N’s turbocharged 2.0L inline-four nominally delivers 276 hp and 289 lb.-ft. of torque – though it’ll kick that up to 286 hp for 20 seconds when you press the N button. Power is directed to the front wheels through a 6-speed manual – though my tester is equipped with the optional 8-speed wet dual-clutch transmission.

The key to the N series, however, is to deliver a complete package, rather than just boosting power. That translates into the beefed-up cooling system and notable improvements to chassis and brakes that allow you to run lap after lap on the track. For those with a technical bent, these include modified jounce bumpers, stabilizer bars and 14.2-inch front brake rotors. The powertrain borrows from WRC rally cars with an integral drive axle.

There are, of course, sporty revisions to the body and interior. And even the electronics are updated. Toggling to the Sport driving mode changes the all-digital instrument cluster to fire engine red and shifts the gauges to a more track-oriented layout.

As I come down to my last few miles, I fall behind a caravan of tourists moving well under the speed limit. There’s a newly painted double-yellow line down the middle of the road and too many curves to take chances. So, I do get the chance to check out the more mannered side of the new Elantra N. Switching back to Comfort mode the sedan seems to almost sigh, like an athlete who has just won the race and is taking a relaxing victory lap.

Nanny functions, like electronic stability control, are now full-on. The damping system suddenly begins soaking up more of Skyline Drive’s bumps and, while I’m leveling a stream of invectives at the minivan holding up traffic, I can see how the N’s dual personality would allow it to serve as a family hauler during the week – while posing a serious challenge to competitors like the Honda Civic Type-R over the weekend.

Hyundai has yet to release pricing for the 2022 Elantra N but it is widely expected to start at around $30,000. It should start hitting dealer lots super late this year. You can find out more on Hyundai’s website HERE. 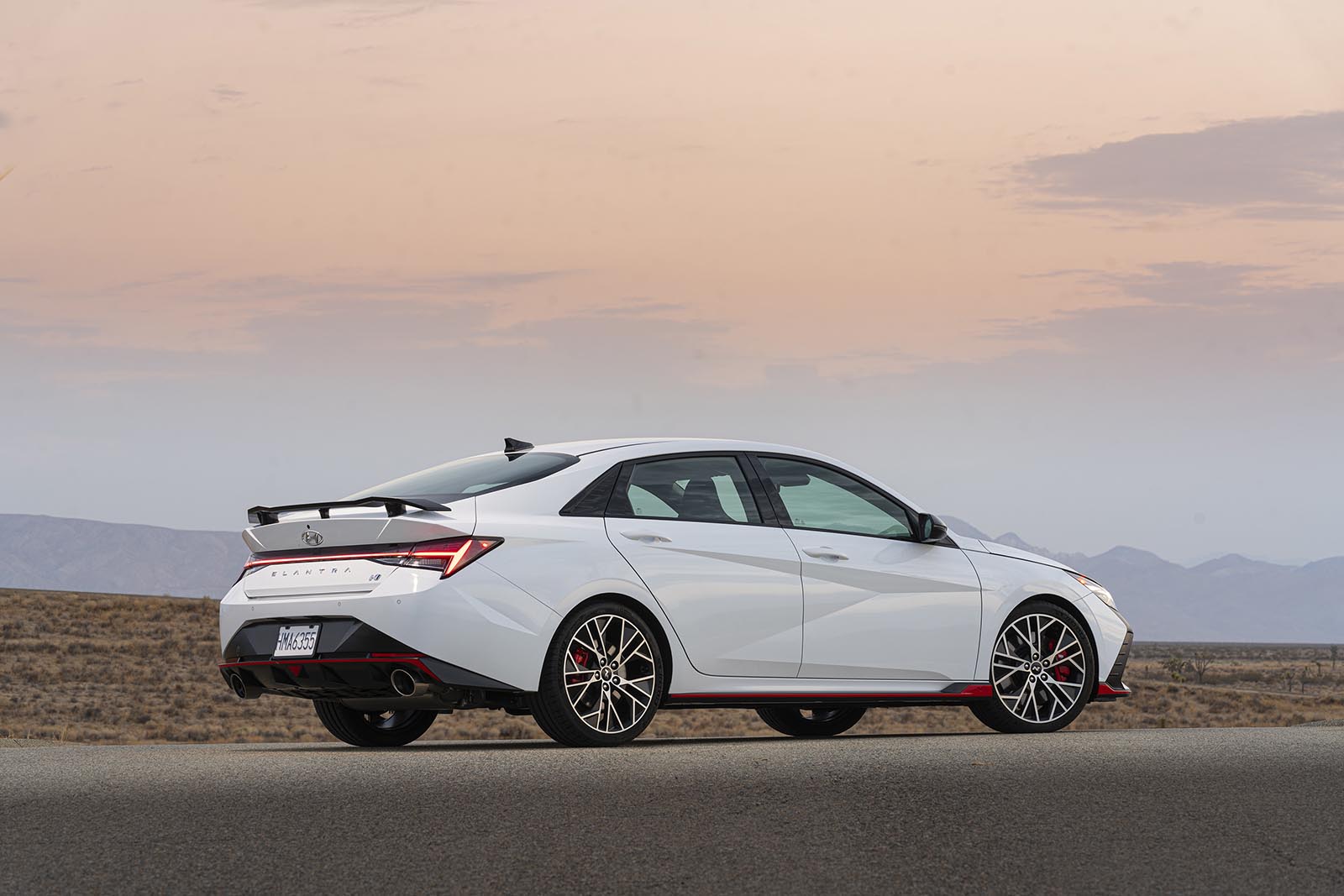