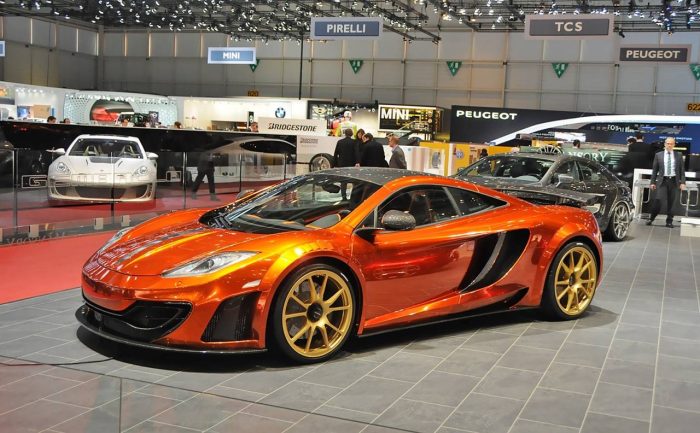 Every car enthusiast knows Mansory is the name to look for when you want the best luxury modifications for your car. For those not yet in the know, Mansory is renowned for its outlandish bodywork designs and creative interior modifications to top brands including Lamborghini, Rolls-Royce, and Ferrari among others. From their base in Brand, Germany, Mansory has made a name in the auto industry, especially in their innovative use of ultra-light carbon fiber which is almost a trademark Mansory modification material. To give you an idea of what these geniuses can do, here is a list of the top 15 cars extravagantly modified by Mansory. 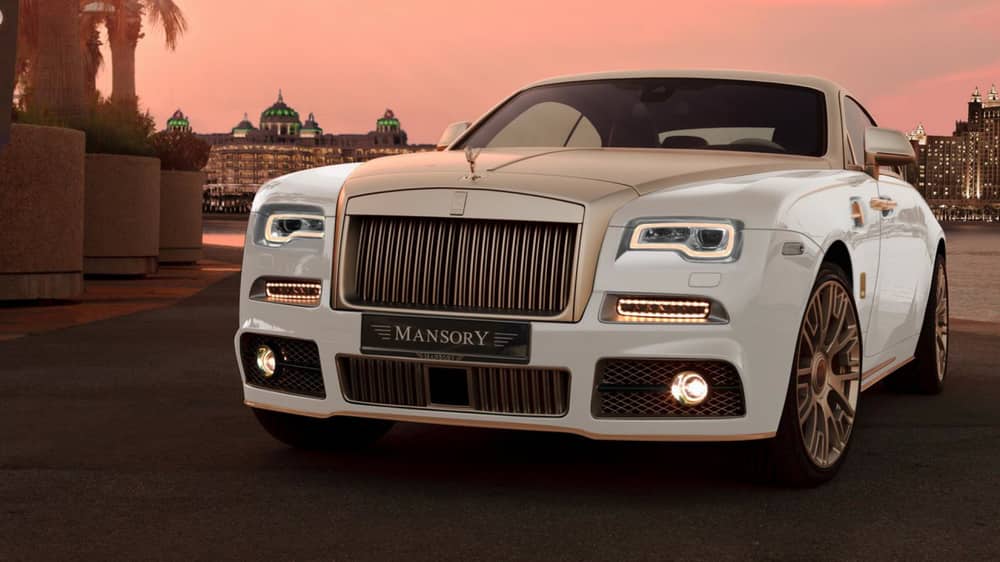 You may be thinking that Rolls-Royce is extravagant enough, but not the engineers at Mansory, who saw it fit to give it a generous amount of gold to enhance its luxurious standards. The Palm Edition 999 is a two tone, gold and white, modified Rolls Royce Wraith. The numerals 999 refer to pure gold and the fact that Mansory only made 9 of them. The exterior of the car features pure gold badges, completely new spoilers, and side skirts made of carbon fiber; Mansory’s trademark material. The interior is quite impressive too. It is fitted with all the fine trappings, including the finest leather and pure gold accessories. The car’s performance also got some attention. Mansory upgraded its V12 engine to give it 0 to 100 km/h acceleration in 4.4 seconds. 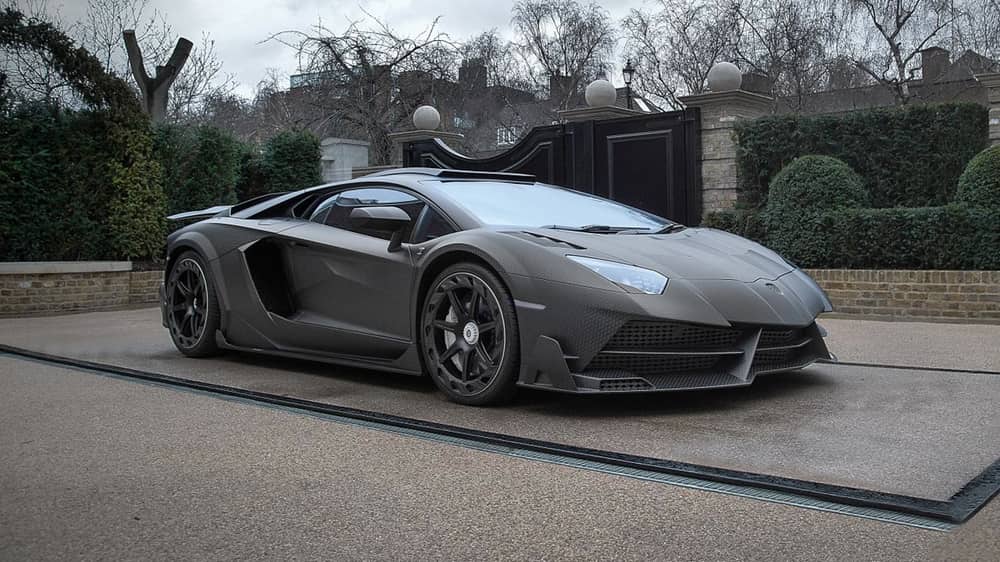 A regular Lamborghini Aventador, if you can call such a car regular, costs around $400,000, which is what you’d pay for a decent home in the US. As if that is not pricey enough, Mansory customized an Aventador SV, named it J.S. 1 Edition, and gave it a price tag of 1.6 million dollars. It has a Batmobile look and is named after the person it was designed for, James Stunt. The car has a new power box, better performance filter, and a completely new exhaust system. True to Mansory’s standards, it also features carbon elements and is in fact 110 pounds lighter than its original version. The enhancements give it a higher performance, making it capable of attaining 0 to 100 km/h in 2.7 seconds. 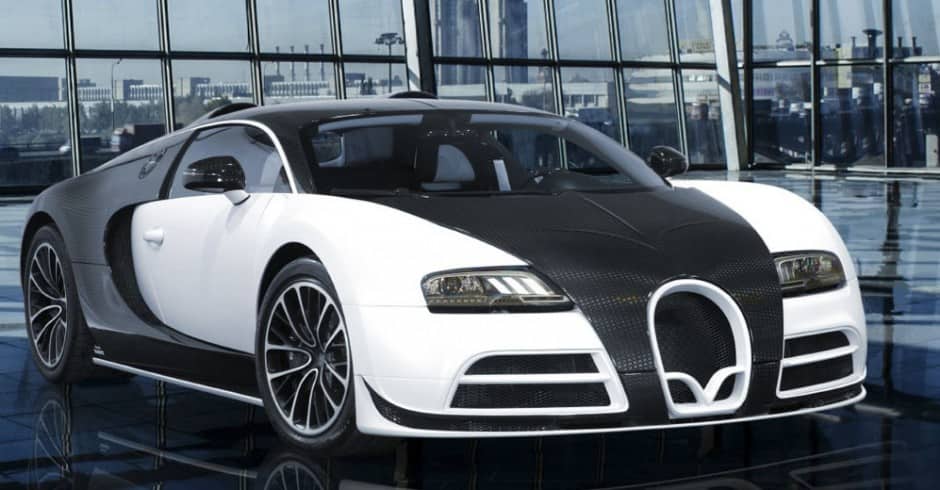 At 3 million dollars, The Bugatti Veyron Mansory Vivere Edition is no doubt one of the most expensive rides in the whole world. Its exterior features front daytime LED lights, just in case you thought the original Veyron isn’t eye catching enough without the LEDs. It comes with modified wings, a shorter hood, and 5 double-spoke alloy wheels. As for its interior, we are talking of the most refined black and white leather, complemented by LEDs everywhere. It has bigger air outlets, a new diffuser, and the Mansory trademark carbon fiber finishes. As for performance, just be contended with the fact that it can go from 0 to 100 km/h in just 2.6 seconds. Pretty impressive, you’ll agree. 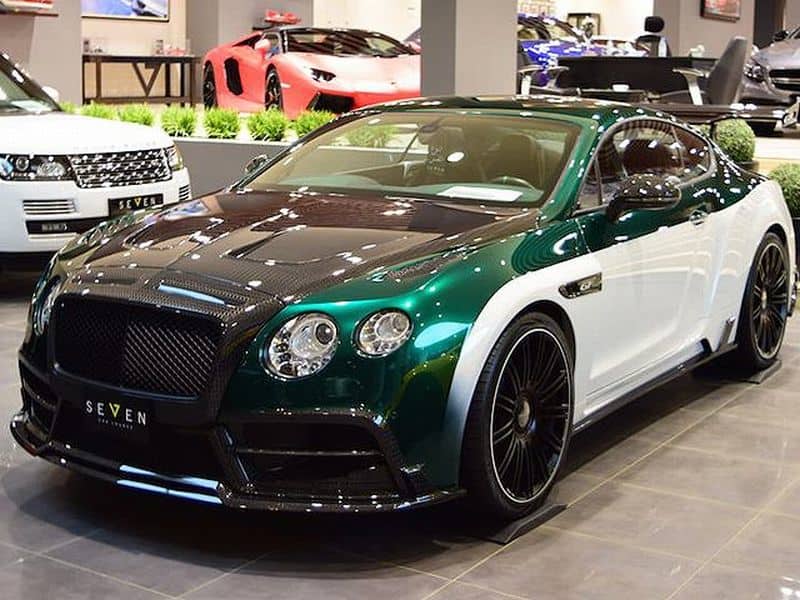 Mansory did an awesome job on this GT Bentley with plenty of carbon fiber, sporty wings at the rear, and unique sideskirts that give this cool ride smoother airflow. The tuner also threw in a sport air filter, not to mention a completely new engine. To top it off, Mansory gave the GT Bentley a beautiful white and green paint job, soft leather, carbon seats, and a top speed of 330 km/h. 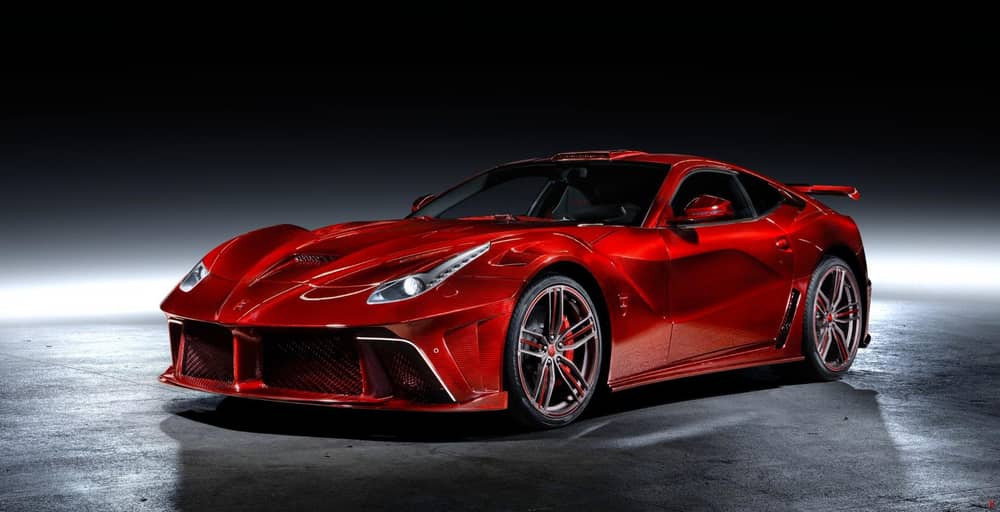 There are a few things more extravagant than the best Ferrari but a 1.4 million dollars Mansory customized Ferrari F12 La Revoluzione complete with all the carbon fiber glory surely tops the list. Like a pricey gem, this car is ruby colored and comes with a new engine capable of producing 1,200 horsepower, a new exhaust system, and 5 triple-spoke wheels. Its sleek bodywork is what every sports car lover’s dreams are made of. If you have the gut, and can afford it, then you can enjoy doing a top speed of 370 km/h in this Mansory-customized Ferrari. 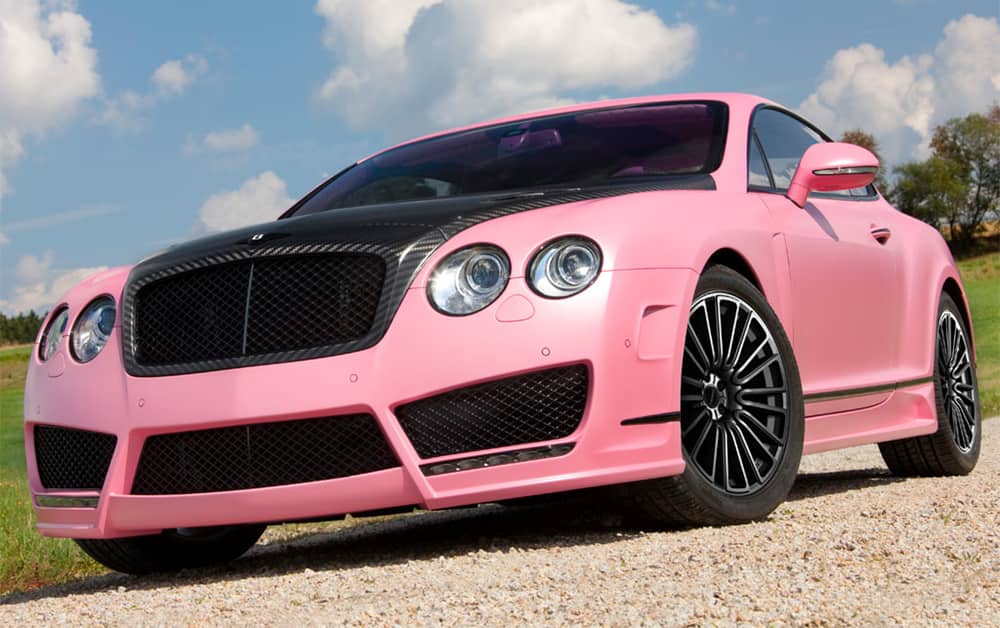 If you ever had grand ambitions of being a Barbie, then this is the car you need to achieve your dream. There were only three of these pink gems made by the way. The car’s exterior features a carbon fiber bonnet and LED lights, while the interior is pink leather and with shiny aluminum pedals. Its braking distance and handling are further enhanced by light aluminum alloy wheels. It has a useful air suspension control unit and a stainless steel exhaust. 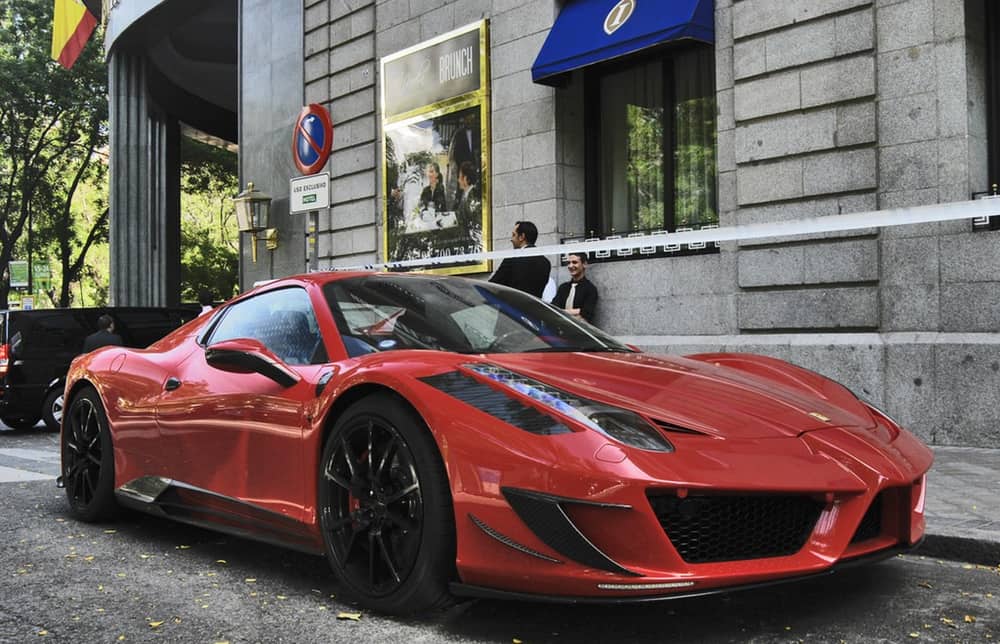 When you enhance a Ferrari 458 Spider with more power and carbon fiber you get what Mansory calls a 458 Spider Monaco Edition. The car’s new skirt has larger air intakes. It also features a new diffuser and bonnet made of Mansory’s carbon fiber. The light carbon fiber makes the Monaco Edition 120 pounds lighter than the original version and capable of going from 0 to 100 km/h in 3.2 seconds. Mansory even went further to give it sports shock absorbers, a brand new engine management system, and a red and white interior with a diamond pattern, just like the Monaco Principality. 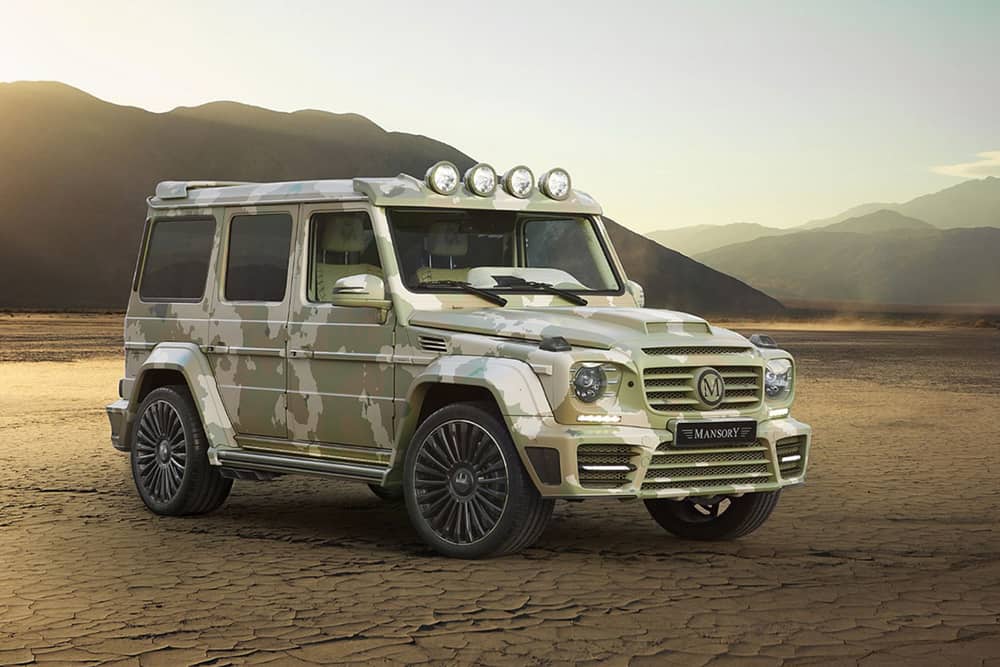 The Kardashians are known for their rich auto collection but if you have dreams of outdoing them, then get the Mansory’s G63 Sahara Edition. The Kardashians are proud owners of the standard G63 Mercedes-AMG, which doesn’t even come close to Mansory’s tuned version. Mansory not only redesigned the car’s body with their favorite material of choice, carbon fiber, but also gave it camouflage decals as well. The car’s interior is all leather with barely noticeable falcon and wing decals imprinted on seats, doors, and on each headrest. The tuner improved its performance with racing parts, including upgraded pistons, cylinder heads, and connecting rods. Its modified twin-turbo engine produces 828 horsepower. 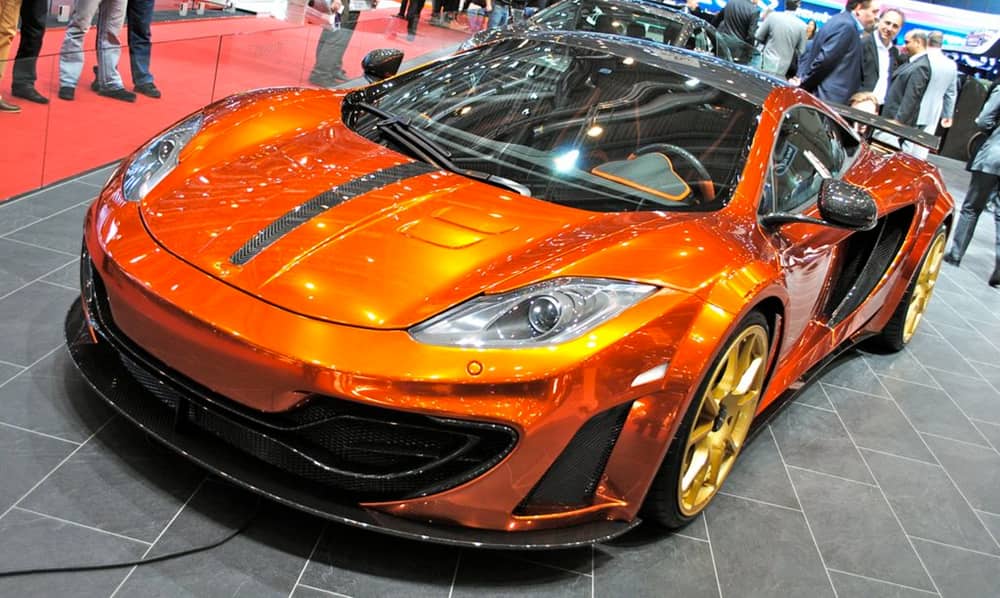 If you feel competing the Kardashians is not enough challenge then try to outshine the sun in this Mansory McLaren MP4-12C that comes in crimson color and gold 10 spoke wheels. All the important components of the original car have been replaced with carbon fiber parts to make it lighter and improve performance. It boasts of decreased braking distance and increased acceleration. This beauty has a top speed of 353 km/h and a comfortable interior made of the finest leather, new airbag, aluminum pedals, and a sports steering wheel. 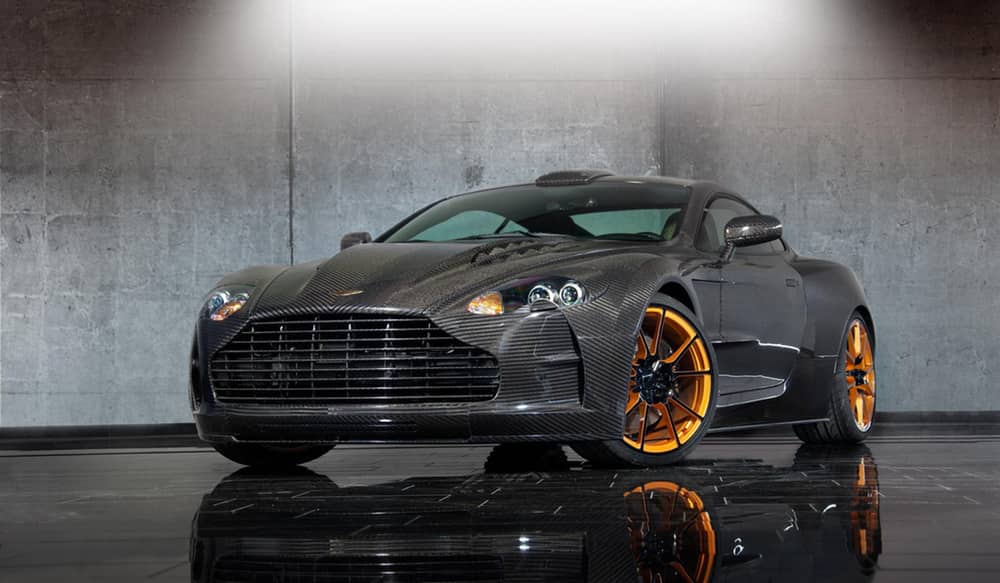 Mansory Cyrus, so named in respect to the first Persian Emperor, is based on Aston Martin DBs or DB9. Its front end has carbon fiber strips while the sides are flared. It also boasts of a new diffuser. Its carbon bodywork has actually shed off 154 pounds from the original car, allowing it to attain a top speed of 300 km/h. As if that was not enough, Mansory also threw in stainless steel mufflers and catalyzers. It also benefited from a powerful 540 bhp V12 engine. How much does it cost? Well, this Mansory creation goes for $620,000. 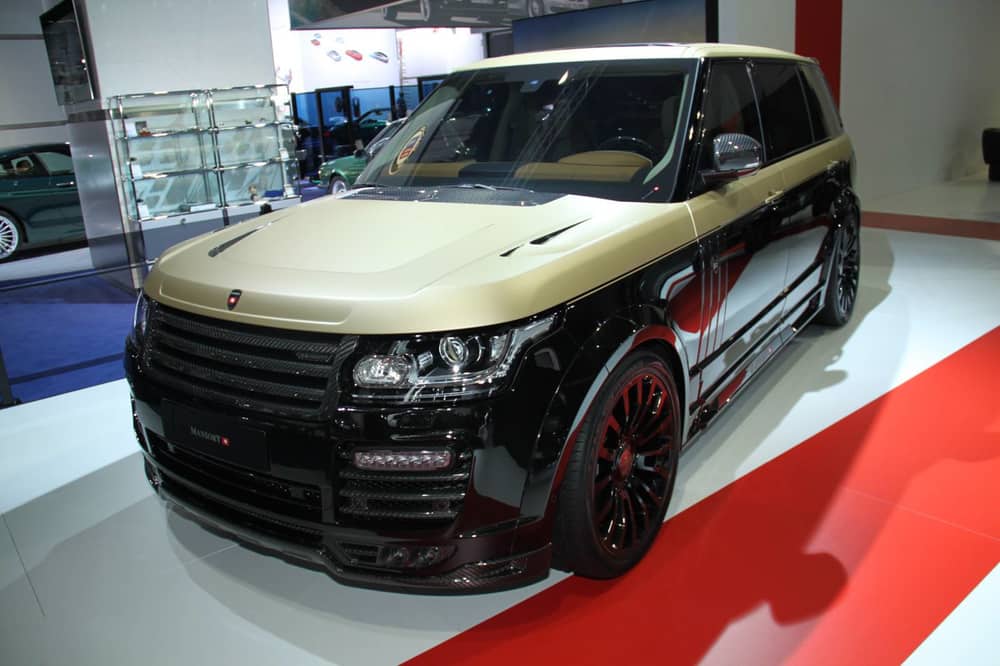 The impression most people have of a Range Rover is some big dirt covered rugged drive. However, dirt is not anything you’d associate with the Mansory Range Rover Autobiography LWB. We are talking of a luxury model in sleek gold and black paint. It features a new hood, longer side skirts, carbon fiber grille, and a leather diamond weave tan interior. 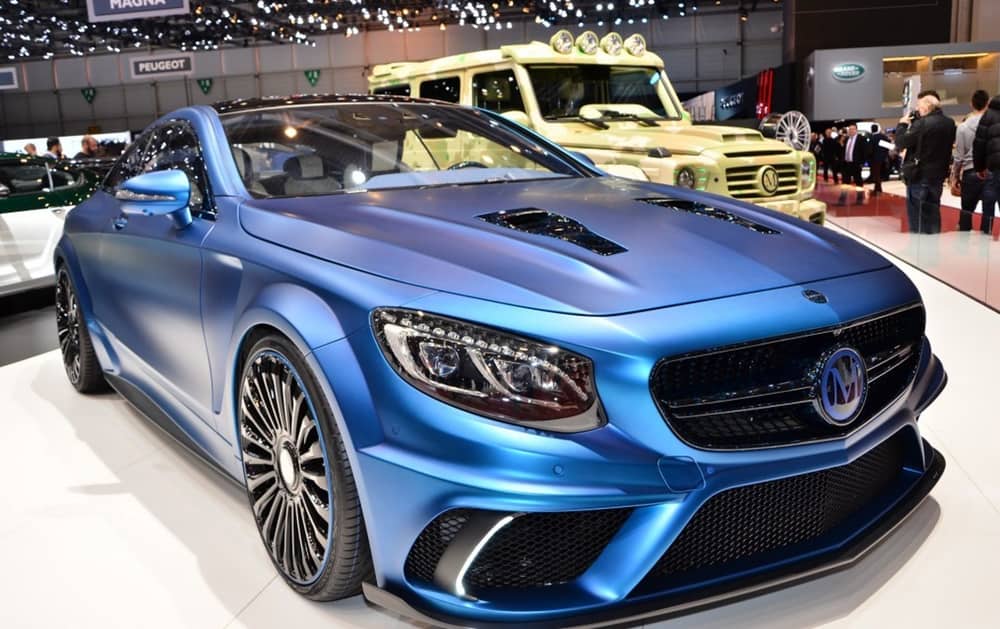 If you are a fan of sporty designs, then the Mansory Mercedes S63 AMG is just the ride you need. It has a dual vented hood, front spoiler complete with air intakes and flashy LEDs, and a roof spoiler featuring a large rear wing. It is one special car with 22 inch multi spokes wheels and a new suspension. Like all other Mansory modified cars, its engine has also been modified to give an output of 1,000 horsepower. Well, that’s some Mercedes. 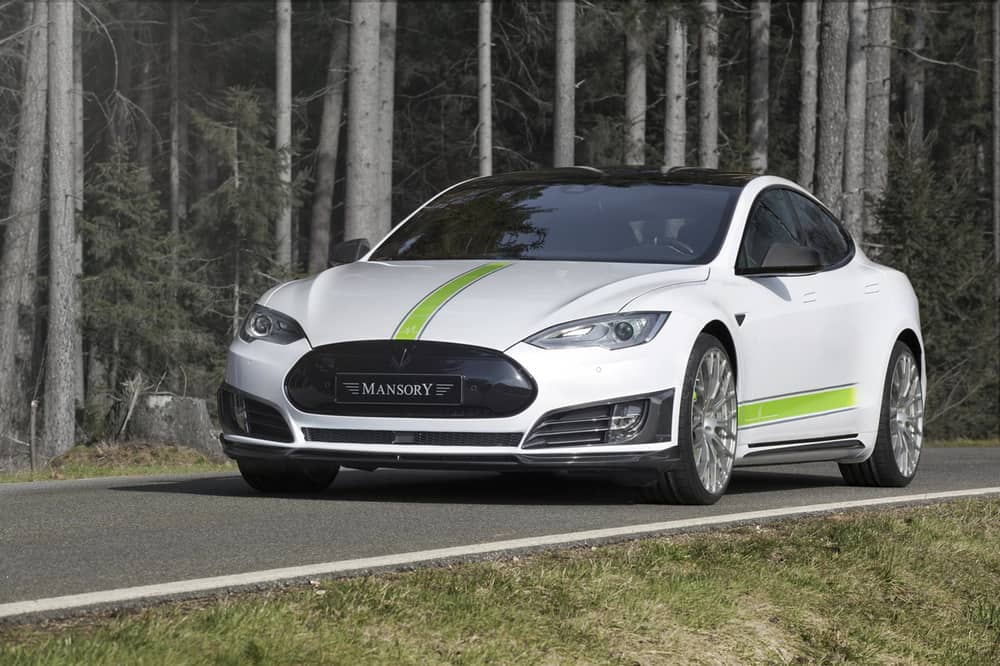 The Mansory Tesla Model S comes in green accents as a testament of its eco nature. It is a beautiful car, both inside and outside. It has a redesigned front apron fitted with daytime LEDs, a new skirt, and much more. Needless to mention, its bodywork is all carbon fiber to save energy and make it faster. 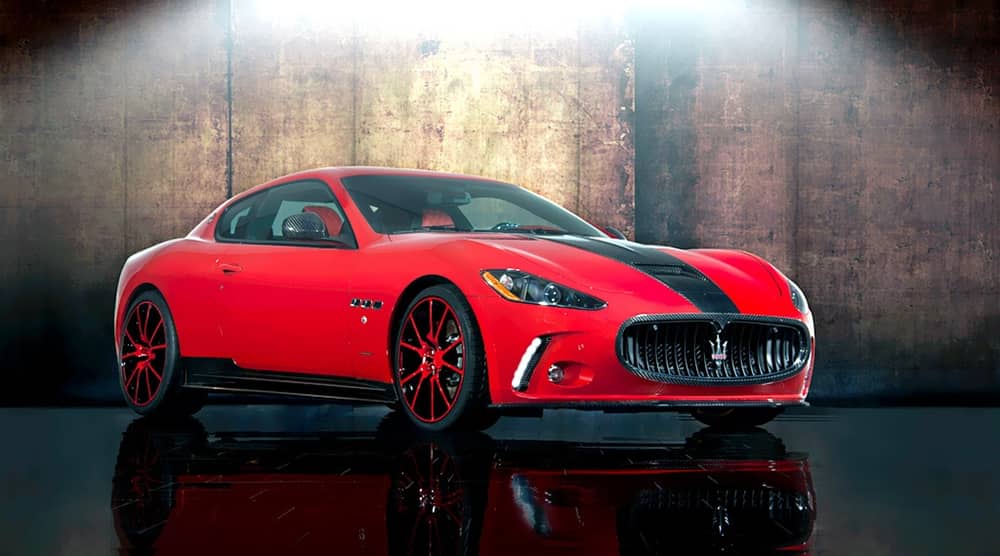 Mansory’s special creation of a Maserati Gran Turismo features carbon fiber grille, front and rear spoilers, hood, rear apron, door sills, exhaust inlays, and a new diffuser. Its interior is all red-orange and black leather. Throw in an ergonomically designed steering wheel and you have a car that is as classy as it is comfortable. The wheels come in the same color as the vehicle. 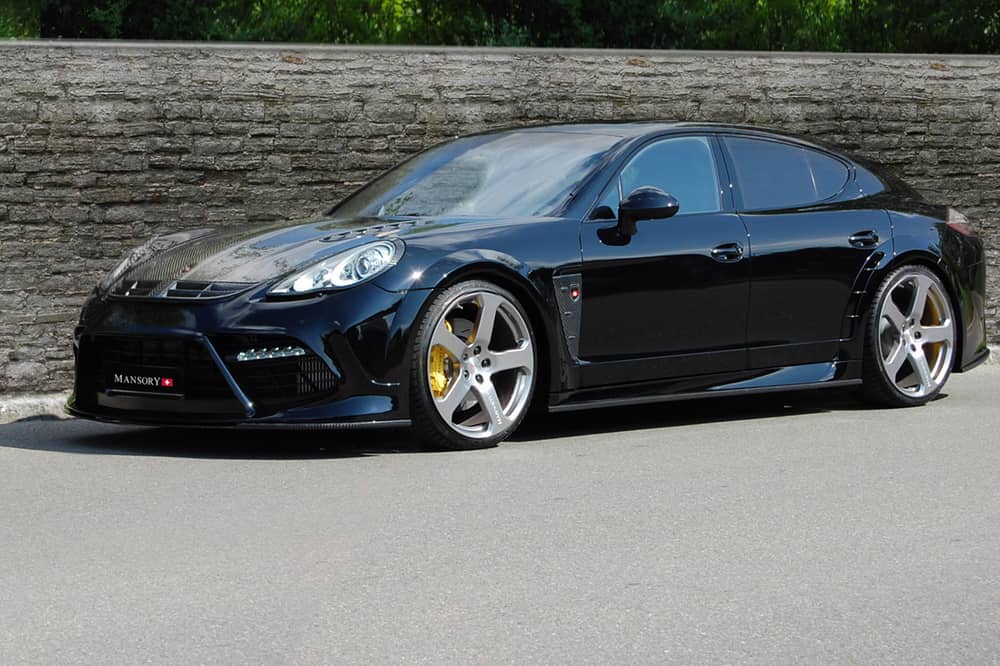 In modifying the Porsche Panamera, Mansory replaced major parts with high-strength carbon materials and polyurethane RIM. The front and rear of the car was widened by 70mm with fender extensions. Mansory also gave the car larger air inlets for better drive unit air flow. They also threw in stitched logos, 22 inch wheels, and LEDs to round up the car’s great look. A Mansory upgrade is never complete without performance upgrades. In this case, they gave the Porsche modified turbo chargers and an additional control unit to give it an acceleration of 0 to 100 km/h in 3.6 seconds. The engine output was also raised from 520 to 680 hp.


Best of 2019 Genesis
What Cars Do These 15 Hot Celebrities Drive?
The 11 Fastest Electric Vehicles in the World
Kimera EVO37 Reimagines One of Rally's Greatest Shapes
Mercedes Vision EQXX Concept Sedan Touts 600 Mile Electric R...
The 20 Sexy Cars Everyone Lusts For