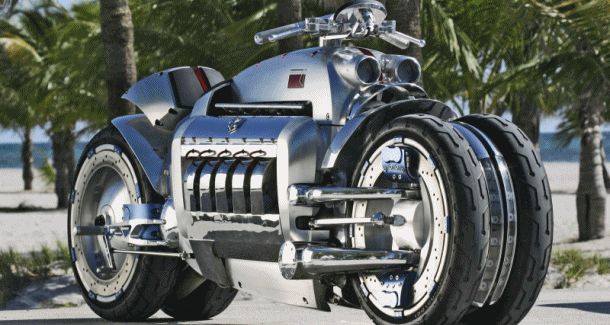 Build a frame and stick a car engine in it – simple, right? Transplant that boxer engine with an Alfa Romeo mill, right?! Wrong! Someone should’ve told these manufacturers and builders exactly that before their car engine motorcycles moved on beyond the planning stages, it could’ve saved them a ton of money. Surprisingly, there are quite a few car engine powered two wheelers out there, usually reserved as showpieces and attention grabbers but some brave souls and motorcycle racers actually try and move their hair-brained inventions from a simple concept to a short run production line. In no particular order, here are some of our favorites… and by ‘favorite’ we mean a wide range of things, from ‘interesting idea’ to general ‘level of enthusiasm displayed,’ with the occasional ‘what the blazes?’ thrown in just for good measure. Here are our favorite motorcycles with car engines! 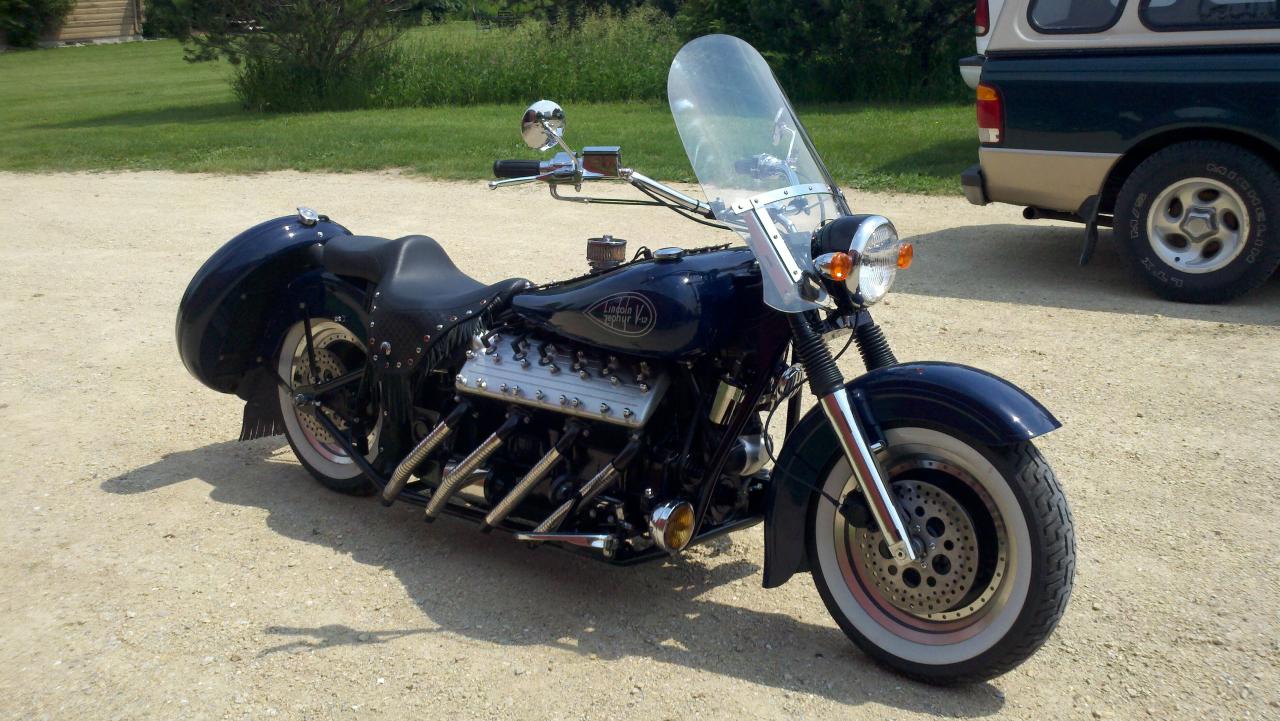 Kicking things off, we’ve got a classic Ford V8 Flathead superimposed into a hard tail springer frame. Calling this a ‘production run’ could be a little bit of a stretch but they did in fact make over 50 different variations, although each one counts as a ‘one off’ really but we’re sticking it in anyway. The vast majority of these Olsen machines have utilized good old fashioned, pre-World War II Flathead, side valve V8s making each one look incredibly rustic, yet incredibly powerful – we’ve even heard that there’s at least one Olsen Bike fitted with a V12 from an old Lincoln! Despite being a V8, they sport a six pipe exhaust system which could confuse the casual glancer. While car engines are typically more powerful than motorcycle plants, the Olson doesn’t pack a powerful punch. The horsepower output is around 60 hp, and the top speed can’t be particularly impressive.

Putting a motorcycle engine into a car is a regular feature in modern car culture, but flipping the idea on its head rarely happens, and when it does, it’s seldom successful. This crazy custom takes a lot of inspiration from Boss Hoss machines, but unlike Boss Hoss motorcycles, this behemoth is powered by an Alfa Romeo V6 engine that’s mated to a Harley-Davidson transmission, squeezed into a stock frame. It’s a tight squeeze, but since the 2.5 liter, 156 hp lump is a little larger than your standard motorcycle engine, it’s hardly unexpected. Is it practical? Absolutely not. Do we want to this weird motorcycle? Definitely. Although we’d feel a lot happier if some of those exposed parts got covered up first! 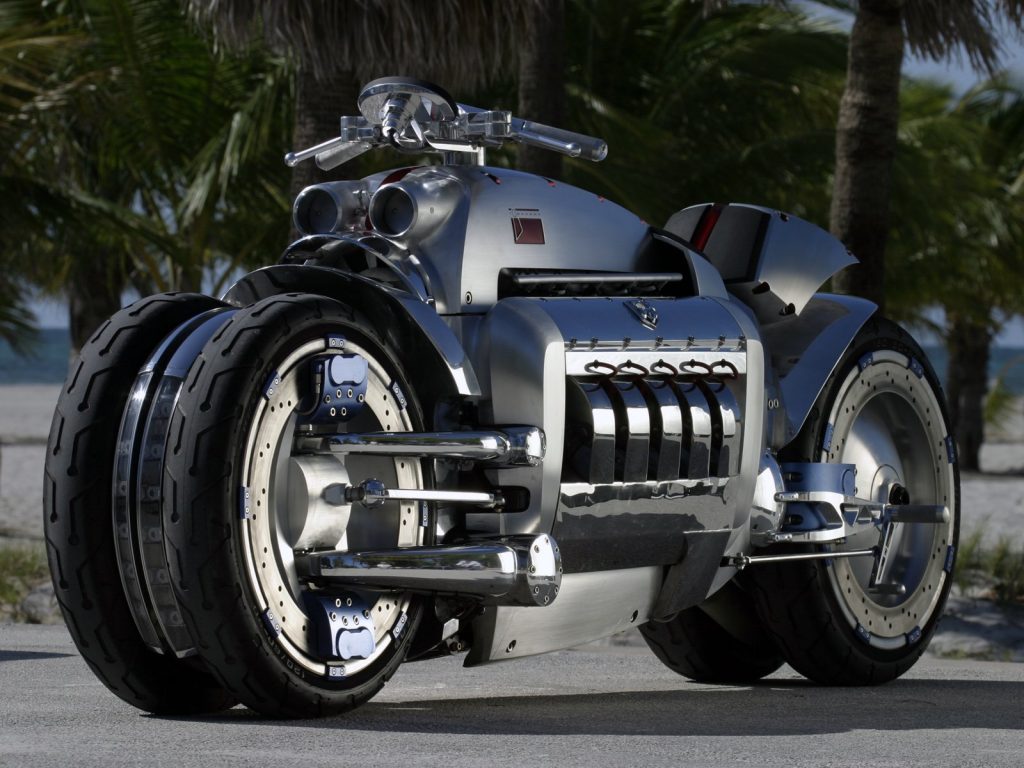 Next up, we’ve got the – perpetually re-posted on every bike forum EVER – Dodge Tomahawk Viper V10. Again, while not strictly a production run, Dodge did offer at least 10 of them for sale but it’s more than likely that only the original concept was the only one to ever get made. This might have something to do with the gigantic $555,000 price tag that Dodge were asking for one and the small fact that any potential buyer had to promise not to actually ride it…which is a massive shame. If you’re paying that much for a Dodge Viper 8.3 liter V10 engine, with four wheels, with lean capability and a promise of around 500 bhp, you’d want to actually ride the thing. 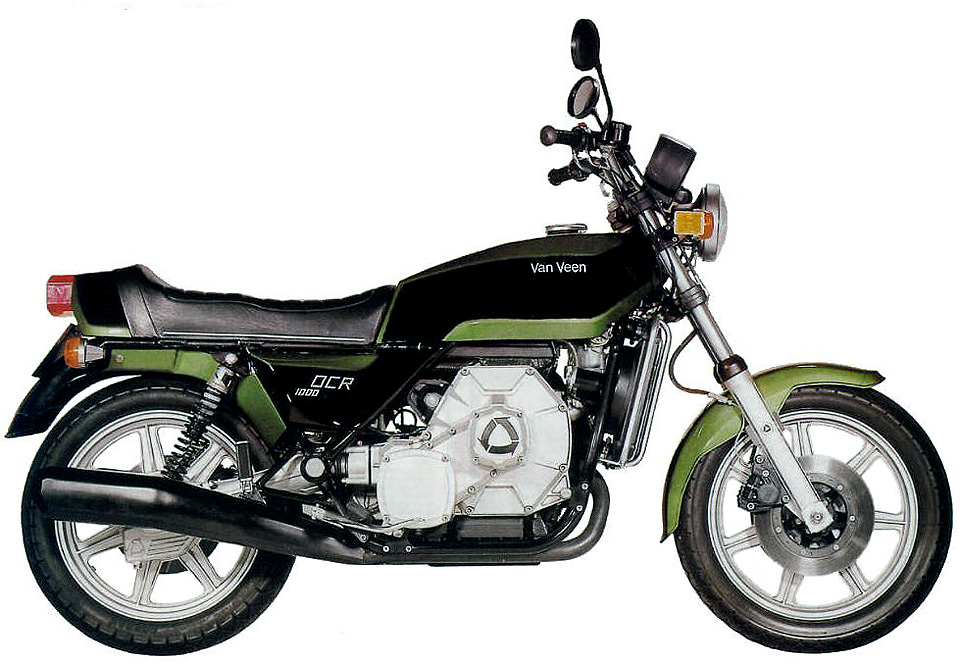 The Van Veen OCR1000 is actually a pretty cool thing. In the late 1970s, Henk Van Veen had a plan to build a Wankel-engined superbike; to do this, he enlisted the 107 bhp Comotor 624 engine from the Citroen GS Birotor, a small engine that actually fit inside a bike frame pretty well. Overall, Van Veen produced 38 OCR1000s, which boasted a top speed of 135 mph, despite an awful lot of negative press about his venture. Citroen also felt the sting of the press, and only manage to sell 847 units of their full, car version. 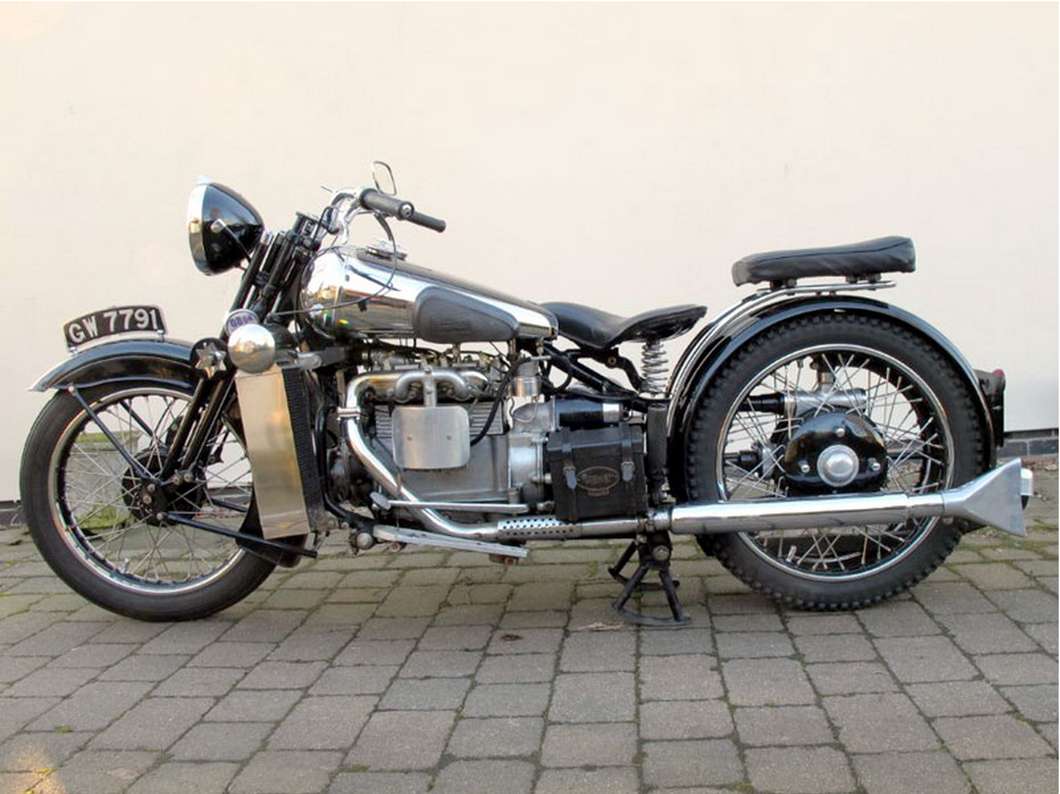 Between 1932 and 1934, Brough Superior built something special: a 747cc four cylinder production bike utilizing a 1930s Austin 7 engine. With a bit of tinkering and modification – adding an extra 50cc – Brough decided that the platform would be ideal for running a side car, so they rigged up not one but two rear wheels, using a modified Austin rear axle. Sadly, the Brough Superior Austin Four didn’t deliver, and only ten were ever made. Back in the day, one of these would’ve been cheaper than a SS100 and if you had one tucked away in your garage now, you’d be a very rich man indeed if you ever fancied selling it at auction. The last one to go under the hammer went for around $385,000 back in 2013… 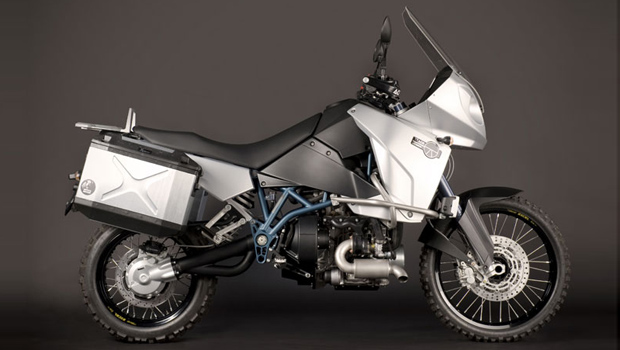 Now, this particular “bike with car engine” project is truly worthy of mention. It’s quite obvious at this stage that sticking a car engine in a bike frame isn’t a great idea but here’s one that actually made a proper go of it and it very nearly almost worked. Firstly, this baby was a diesel motorcycle. Secondly, it chose an appropriately sized donor engine, in the form of the Mercedes backed Smart Car. The turbocharged engine was then mated to a variable transmission and a BMW shaft drive…and it worked. But whatever happened to the firm is a bit of a mystery. They’ve fallen off the map – probably due to poor sales.

In a strange twist of car culture fate, the Smart Car has been modified by more than a few engineering companies to work with Suzuki Hayabusa engines or GSX-R power plants. If you’re using a small car engine to power a motorbike, but the small car gets better performance with a motorcycle engine, perhaps the whole thing is mere folly after all…? So there you have it: car engine plus motorcycle frame equals nothing but a headache. So stop it.

Q: How to build a motorcycle with a car engine?

A: Depending on the size and shape of the car engine in question,  it could be as easy as bolting the engine into an existing frame and install a chain drive. However, doing the job properly is a massive undertaking, and it’s not something we’d recommend unless you happen to be a qualified mechanic with all the necessary tools and know-how. Light tinkering it is not.


10 Electric Moped Models Redefining Urban Mobility!
The 10 Most Expensive Vintage Motorcycles Sold At Auction
The Quadro 4 – Is it a quad or a scooter?
10 Modern Takes On The Classic Scrambler Motorcycle
10 Badass Polaris Slingshot Customs
10 Motorcycles That Should Convince You To Buy An E Motorcyc...