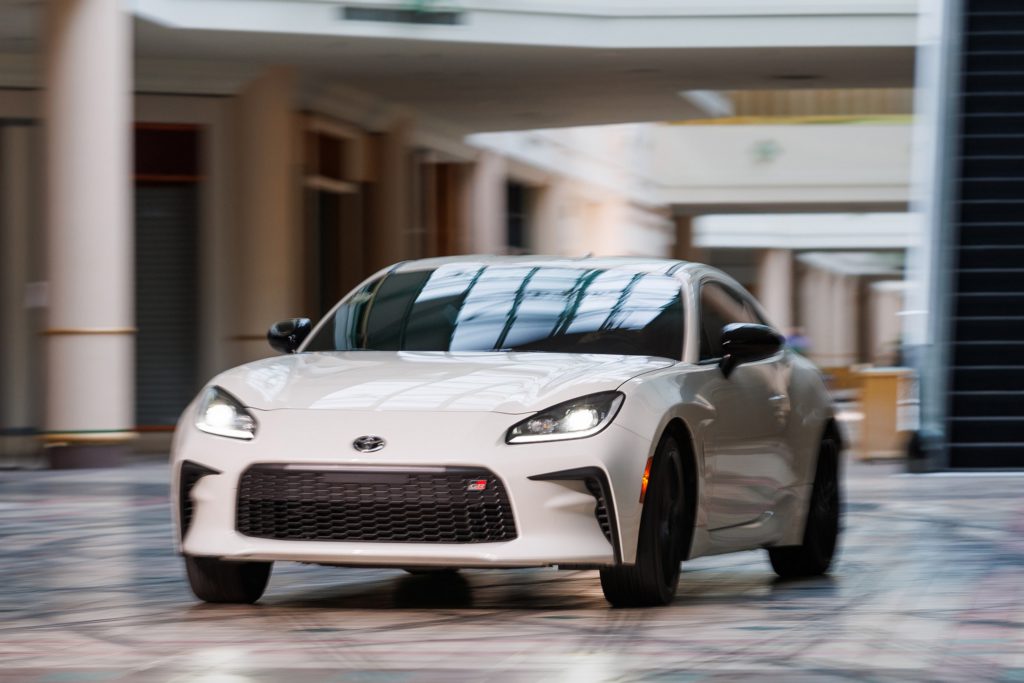 We’ve all wanted to go drifting through an empty mall. Toyota has taken three of its pro drivers and done it. They used the 2022 Toyota GR86 to whip around storefronts, pillars, and do burnouts in what was probably a J.C. Penny before the mall was abandoned.

You don’t need a reason to go hooning around an abandoned building if you get the chance. Toyota has come up with one anyway. The premise for the ad is the battle between two Gazoo Racing enthusiast employees and some stodgy executives who don’t want anyone to have fun, especially when they’re trying to advertise a car.

Oh, and there’s a focus group, too, for some reason.

Let’s Go to the Mall!

The suits want to show Toyota GR86 features like a backup camera and how easy it is to park. Things you do at the mall, of course. The GR team wants to showcase the sports car’s enthusiast credentials. A stick shift, the 2.4L flat-four, and the ability of the vehicle to do big smokey burnouts and drift across some tile hallway floors. We wish we could do these things at the mall, but we don’t have the talent or the budget.

Both sides of the table agree that more cars are needed to “tell the GR story.” Accordingly, two more GT86s show up—fully-modified drift racer versions of the vehicle.

Toyota calls the ad “The Focus Group.” You’re not wrong if you think an abandoned mall near Chicago has already had a car chase scene. But this isn’t the same mall where Jake and Elwood Blues careened through stalls and stores back in 1980. It turns out the Chicago area has a lot of empty malls. This one looks like the Lincoln Mall in the city suburb of Matteson.

Toyota Killing it With Cool Ads

This spot is a follow-up to a Toyota GR Supra ad from last summer called The Pitch. You’ll see the end of it at the start of this ad – it shows a GR Supra driver who wants to do some grocery shopping before getting pulled into the middle of a drift battle. That ad also includes a pizza delivery, though the pizza is in pretty rough shape by its end, and it finishes off with a pretty sweet jump.

Don’t worry too much about the plots of either of the ads. Or the back and forth between execs and enthusiasts. The point is to make excuses to do fun stuff in GR vehicles like the Toyota GR86, and we’re here for it. Drifting through malls, sliding around parking garages, and jumping off the top of a building? Yes, please, we’ll take it all and then some more.

Is the focus group excited? Absolutely. Are we excited? Of course! Is that all? No!

Toyota saved a little something for the end of the spot.

One of the suits wants to do a Flying-V display to show off the whole Gazoo Racing family. But since GR only offers the Toyota GR86 and GR Supra over here, the V is one leg short. And you can’t have an unbalanced Flying-V; that’s just a flying backslash.

Enter the tease. It’s a silhouetted look at the hatchback rear of what has to be the GR Corolla and the sound of its turbocharged engine rumbling. The ad ends with “to be continued,” and we expect to see the GR Corolla revealed on Thursday. We were already excited, and now we’re pumped.


The Best (And Worst) Of 2021 Volkswagen
Best 2019 Compact Cars
2021 Toyota GR Supra Sport Top Concept: The Supra Targa Is B...
13 Fantastic Gems You'll Be Able to Import to the US in 2018
What Happened to the British Automotive Industry and Where i...
James Deane and Kristaps Bluss Shred in E92 Eurofighter Drif...