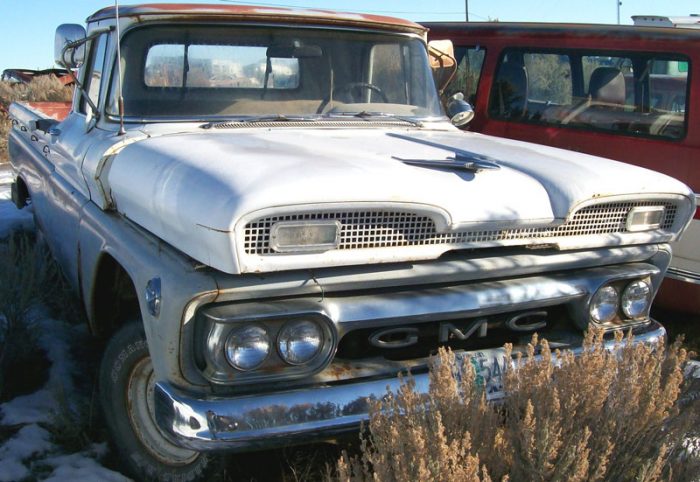 Detroit has not always hit the mark when it comes to making attractive vehicles.  Case in point is the pickup truck.  Although there have been looks that are coveted by collectors, there have been a lot of misses as well.  Join us on our journey as we cover the ugliest pickup trucks.

Cars and trucks are a lot like human faces when it comes to judging looks.  We make a decision on a person’s face in the same manner that we look at the front of a vehicle.  Although all four sides of a vehicle form our final impression of how a vehicle appeals to us, an ugly front view can send us packing.  Detroit’s ugliest bone stockers are presented here.  They are chosen manly for the looks from the front of the vehicle.

Like cars, trucks followed trends as they developed.  Initial grills were made large for cooling.  This often caused ugliness in the same way a facial feature is too big.  Large noses are like large grills.  In the 1930’s and 40’s grills got outrageously large.  Similarly, the Cab Over Engine era enhanced functionality in addition to ugliness.  As the 50’s progressed, vehicles went from swept and streamlined to a boxier more flat look.  Hence this period dominates the list of ugliest trucks.

Ranking 12 Of The Ugliest Pickup Trucks Ever Made

First on our list is the 1939 Ford Pickup due to its large grill area.  This truck was so hideous it was only made for one year.  The long grill overshadowed the entire look of the truck from the front.  From the side it wasn’t so bad.  From the front, it could scare a platypus.  Now that’s ugly!

The 1961 GMC 1000 Series is a classic example of the ineptness and arrogance of Detroit.  As vehicles transitioned from aerodynamic to square, the 1000 arrived in a time when GM ruled the streets.  This dominance occurred after having virtually convinced the government to eliminate all public transportation in the 40’s thus guaranteeing a market for their selves.   Although the lower grill of the GMC exhibits some sort of style, the upper portion of the hood rudely juts out with a high degree of hideous.  It’s almost as if GM stacked two grills on top of each other to get this final effect.  Regardless of the origin or their intention, this grill is nothing short of a representation of your father’s furrowed brow after you upset him.  GM would have been better off cutting the front of a bus and sticking it on the front of this truck.

Throughout the years, International has come up with some butt ugly designs.  The 1957 Golden Jubilee is an example of International’s inability to create an attractive design.  This particular year was extremely difficult to look at.  By incorporating the turn signal into a bezel along with the headlight, International created a look as though the truck were shedding a tear.

Stacking the headlights didn’t improve the International truck’s look with the 1958 model.  Based on their inability to overtake the light truck market in a manner similar to their medium and heavy truck success, International might have been better off sticking to tractors.

The 1947 Dodge was probably one of the ugliest trucks ever made.  I often wonder if a frog was the inspiration for the bug eyed headlight look.  The huge grill with the cross didn’t help matters any.

COE cab over engine pickups were an attempt at reorganizing the typical three box setup of the cab, engine compartment, and cargo box.  They offered better visibility than their longer nosed counterparts along with increased cargo space.  They also resulted in a bulbous front end reminiscent of Peyton Manning’s forehead.  In the same manner I get sick of seeing Manning constantly on TV, I’m not a fan of these ugly ass designs.  This 1953 Chevrolet model was appropriately filmed on a dismal cloudy day that goes well with the unattractive look 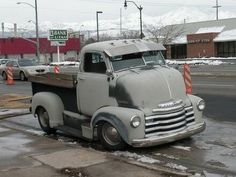 Flat might be useful in big trucks and buses however it has no appeal when it comes to the looks of a vehicle.  Aerodynamic designs are representative of motion.  Flat designs are about as appealing as a wall or watching paint dry on one.  GM, Dodge, and International came out with flat designs.  The 1973 Chevrolet pickup’s flat look was a departure of the more stylish 1972 version.  It was definitely a step down in class for the soon to be bailed out automaker.  No wonder these vehicles rusted away.  They were so ugly that they just wanted to disappear anyway possible.

Dodge didn’t improve much when trying to make a flat design sportier.  All they did with this 1963 Custom Sport Special was create more places for the rust to hide while turning more heads…..looking away to avoid the ugliness.

One cannot think of ugly trucks without including the Dodge pie plate designs such as this 1965 model.  This truck had to have been designed on a Monday or a Friday; or at the very least, in a class room that sported an alphabet poster on the chalkboard.

Again the flat sided designs and square features did nothing to indicate motion and sleekness.  In addition to being huge in the grill area, this  Dodge Ram’s instrumentation panel looked like it was designed by Playskool.

International also failed to improve on their appeal by keeping with flat, basic grills.  They used the same basic look from 1969-1970.  A few changes were made to the headlight bezels and the grill however the same boring and unattractive look probably accelerated the demise of the light truck division in 1980.

Looks don’t always scale.  Although humans look good with big eyes, Ford’s decision to make the 1973 Courier look like its full sized brother was a disaster.  Ford took the Mazda design and integrated their own grill.  Jeepers Creepers, where’d ya get those peepers?

As pickup truck trends developed in technology, the looks didn’t always seem to follow.  Many times, Detroit created designs with just plain ugly looks especially from the front.  Now we are stuck with these reminders of poor appeal.  The only hope for these monsters is that they will be customized and improved as they become harder to find.  Until then, they will sit and rust as restorers and customizers focus on the less hideous models of yesteryear.


10 Most Expensive Hot Wheels
15 Of The Most Memorable TV and Movie Cars
The Best Jeep Engines And Weirdest Factory Motors Ever Produ...
8 Awesome SUVs You Will Never Be Able to Buy in the USA
10 Best Off-Road Trails: From Mild to Wild
Top 17 Hottest 2016 Supercars