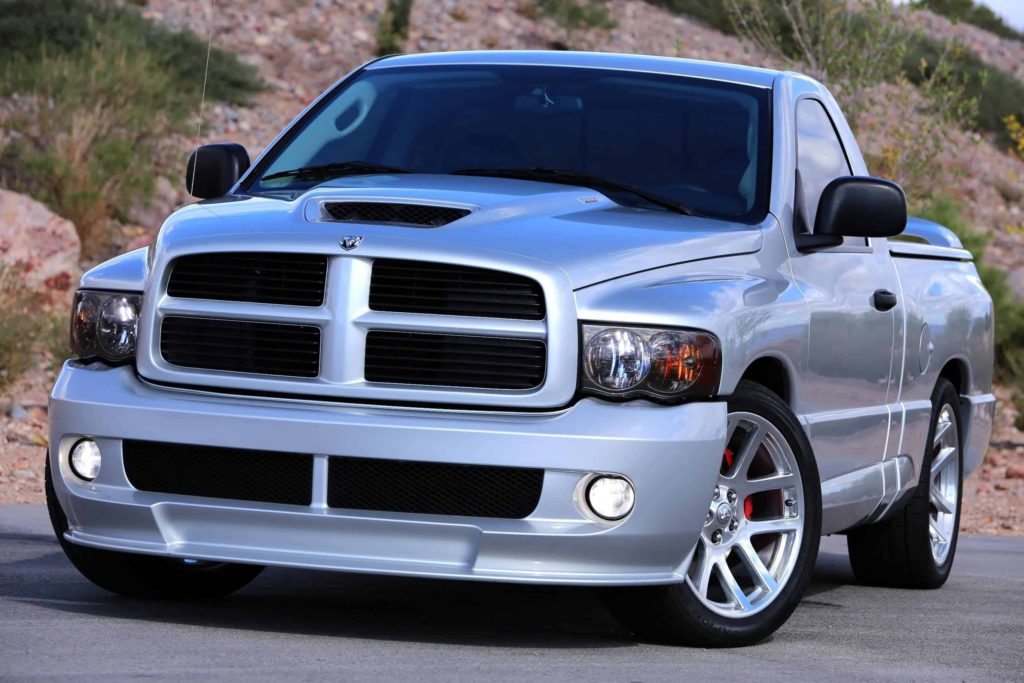 When it comes to high-speed acceleration and performance it’s easy to overlook the humble pickup truck. Though they’re designed for transporting goods, tackling tricky terrain, and other utilitarian purposes, most hide a brawny engine under the hood. In some cases, those engines have more than enough power to offset their bulky and overweight chassis, producing unexpected, jaw-dropping performance. What are the fastest production trucks ever made for the U.S. market you might ask?

Here are 12 of the fastest production trucks ever in the USA.

The Fastest Production Trucks in America 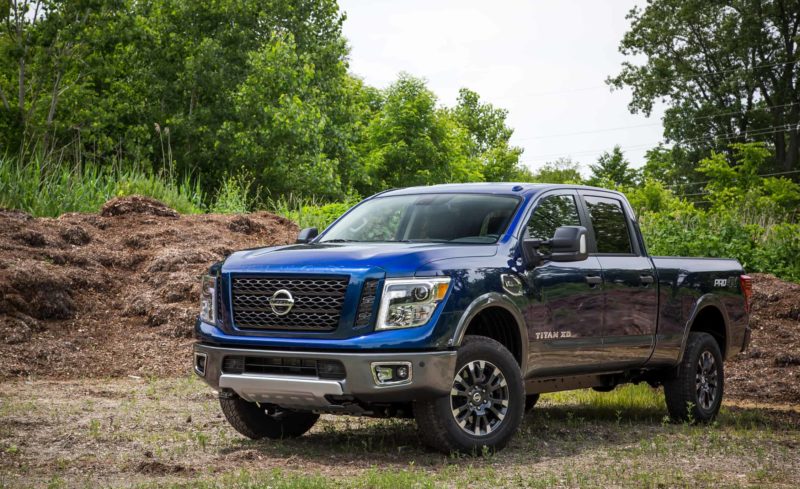 Nissan pickup trucks are not the most popular in North America. However, the vehicle manufacturer is slowly gaining popularity with the Nissan Titan. Apart from being one of the fastest pickup trucks in the world, it is one of the most established models that Nissan offers in the United States. The pickup does 0-60 in 7 seconds flat, with a top speed of 122 mph.

The engine also uses VVEL (Variable Valve Event and Lift) technology, which is instrumental in reducing fuel consumption. This makes it both fast and efficient! 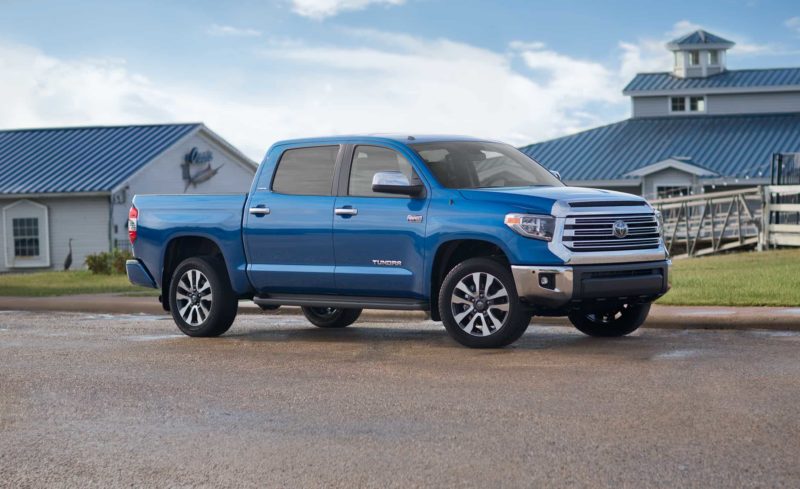 Every Toyota Tundra comes with a V8 engine. One of the options is a 5.7 liter V8 that produces 401 lb-ft. and 381 horsepower. When you put your foot down, the 5.7-liter engine zooms from zero to sixty mph in 6.7 seconds, making it one of the fastest production trucks on the market.

The Tundra isn’t just fast, it’s also strong, boasting more torque than its competitors. Toyota loves touting the towing capacity of the Tundra, which is justified. 10,200 pounds is the highest capacity for the 5.7-liter V8 engine, and it is the second-highest towing capacity among pickup trucks in its class worldwide.

It’s fast and powerful, but it’s not efficient. It is the only pickup truck in its category that does not meet the 20 mpg on the highway mark. The EPA rates the Tundra at 14 mpg combined. 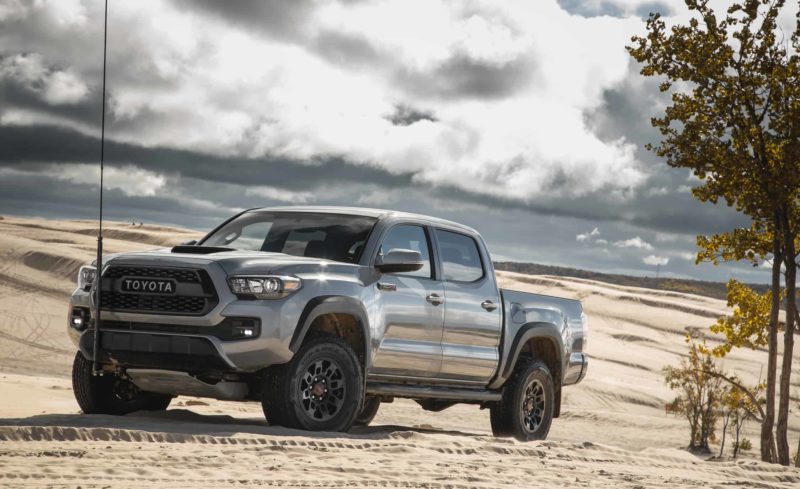 Next up, we’ve got another Toyota ranking as one of the fastest pickup trucks in the world. The Tundra is a practical and versatile truck that packs some serious punch.

If drivers opt for the Tacoma’s 4.0-liter V6 powerplant they can expect output peaks of 236 horsepower, 265 lb-ft of torque, and a top speed hovering around the 109 mph marker. In terms of acceleration, zero to sixty is achievable in a tidy 6.5 seconds.

The base engine is an uninspiring 2.7-liter four-cylinder, with a lackluster 159 horsepower. All engine options are available with manual or automatic transmission and in rear- or four-wheel-drive configurations. 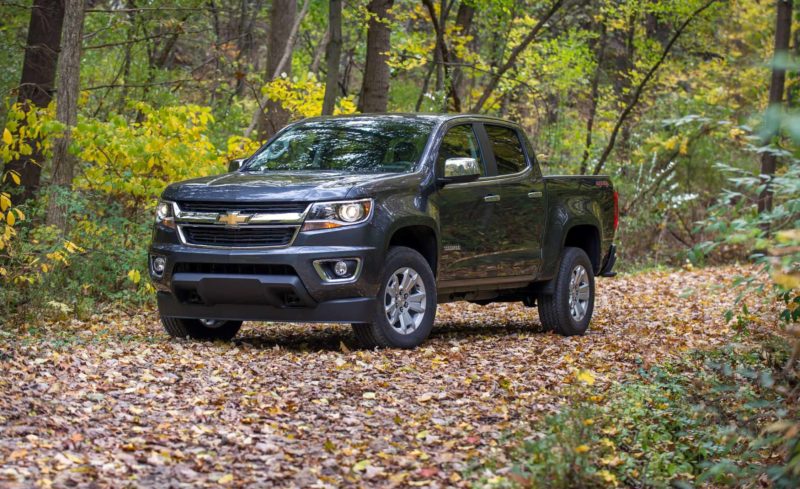 Next up, we have the Chevrolet Colorado. The Colorado is a popular truck that balances everyday practicality with boisterous engine performance. In LT trim, the Chevrolet Colorado sports a  3.6-liter V6 that produces a hearty  275 of lb-ft. and 308 horsepower. With the power delivered using an 8-speed automatic transmission, the Colorado can hit 60 from a standstill in just 6.1 seconds.

Compared with the other available engine options, the V6 might not be the most economical. However, with an estimated 25 mpg highway and 18 mpg city, it’s hardly a gas guzzler. If you’re looking for something fast that can pull a heavy load, then this isn’t a bad option at all.

Curiously, the similarly spec’d GMC Canyon doesn’t boast the same acceleration times. Though the GMC Canyon features the same hardware options, it hits 60 from a standstill in a slower (but still quick) 6.9 seconds. The Canyon might lose on acceleration, but it does have plusher trim options. 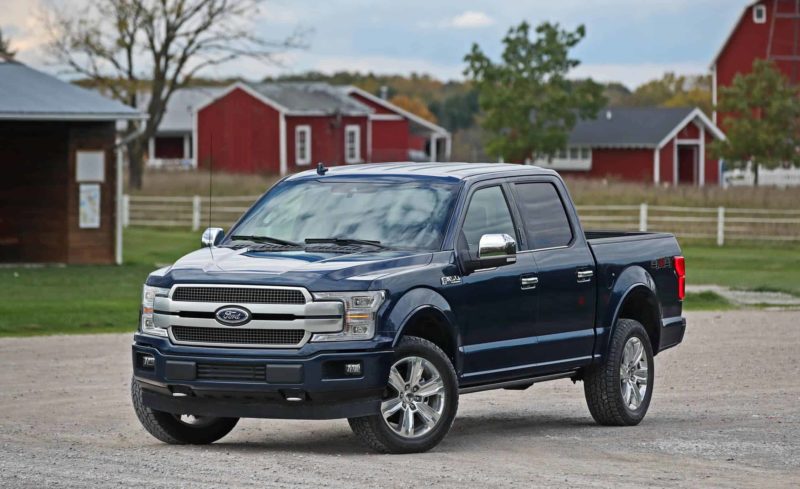 Very few consumers were excited about Ford’s decision to redesign the most popular truck in America with an aluminum bed and body. As it turns out, the new F-150 packs a serious punch. While it’s not the fastest truck in the world, it’s not far off.

The redesign shaved a cool 700 pounds off of the F-150’s overall weight. The weight saving, in combination with the F-150’s 5-liter engine, has boosted the truck’s performance significantly. It now produces 325 horsepower, 376 lb-ft of torque, with a top speed of 107.5 mph. And the 0 to 60 time? 5.6 seconds. This acceleration is as high as some of the (slower) sports and racing cars in the world today.

Despite the excellent performance, the F-150’s efficiency is reasonable. It has an EPA rating of 20 mpg combined. Note that these fuel ratings change when you drive at high speeds, or when you floor the pedal every chance you get. Ford also offers a 3.0-liter diesel option with superior fuel economy but far less performance. 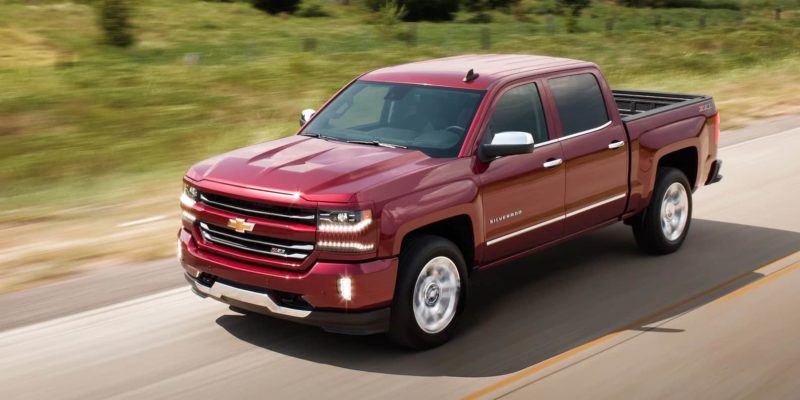 Next on the list of the fastest production trucks in the world is the Chevrolet Silverado 1500. It does 0-60 mph in an unbelievable 5.4 seconds. The secret to the Silverado’s success is the truck’s engine. It is powered by a muscular 6.2-liter V8 engine producing a whopping 420 horsepower and 460 lb-ft of torque. The result is a fast machine that can reach unexpected high speeds.

The Silverado 1500’s engine includes cam profile changes determined by power needs, dynamic cam timing, and cylinder deactivation on two cylinders. For deactivation, low-power, and high-power capabilities, each camshaft offers each valve 2 or 3 different lift profiles. Chevy vintage enthusiasts will be pleased to know the old “Tri-Power” system has been brought back with this model. An electric water pump is present in the engine to assist in the reduction of drag to the power system.

Similarly, the GMC Sierra is also fairly quick when equipped with the V8 engine. However, despite sharing 99% of the same DNA as the Silverado, it hits 60 mph from a standstill at a slightly slower time of 6 seconds flat. 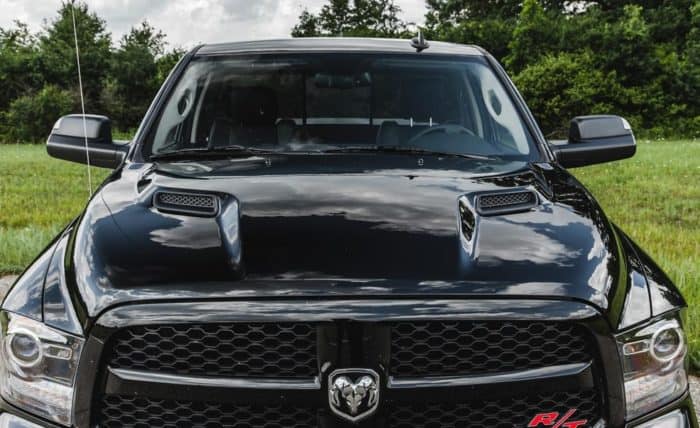 The Dodge RAM R/T can get from zero to 60 in 5.4 seconds. This baby has a 5.7-liter V8 engine capable of producing 395 horses and a mammoth 410 pound-feet of torque, and is backed by an eight-speed automatic gearbox. It’s agile, fun to drive, and very fast.

Not only is it fast, but it also has some serious pulling power. Capable of towing weights of up to 10,300 pounds, the Silverado manages to strike a healthy balance between sports performance and everyday practicality. It’s not ridiculously inefficient either. The fuel economy is rated at 15 mpg for city driving, which is decent for a truck of this size.

It’s seriously powerful, and one of the fastest production truck models ever! 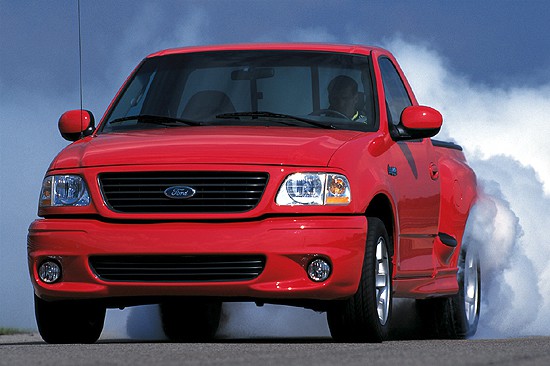 Though discontinued in 2004, the Lightning had a decade run as the fastest of the fast and reportedly reached a top speed of 147 mph. Compared with many modern-day trucks, it’s a veritable speed demon.

The Lightning’s success was thanks to its beautifully engineered 5.4-liter V8, which came complete with supercharging technology. The result was an output of 380 horsepower, 450 lb-ft of peak torque, and a very impressive 0 to 60 time of 5.3 seconds.

It’s lightning fast on the pavement and a force to be reckoned with. 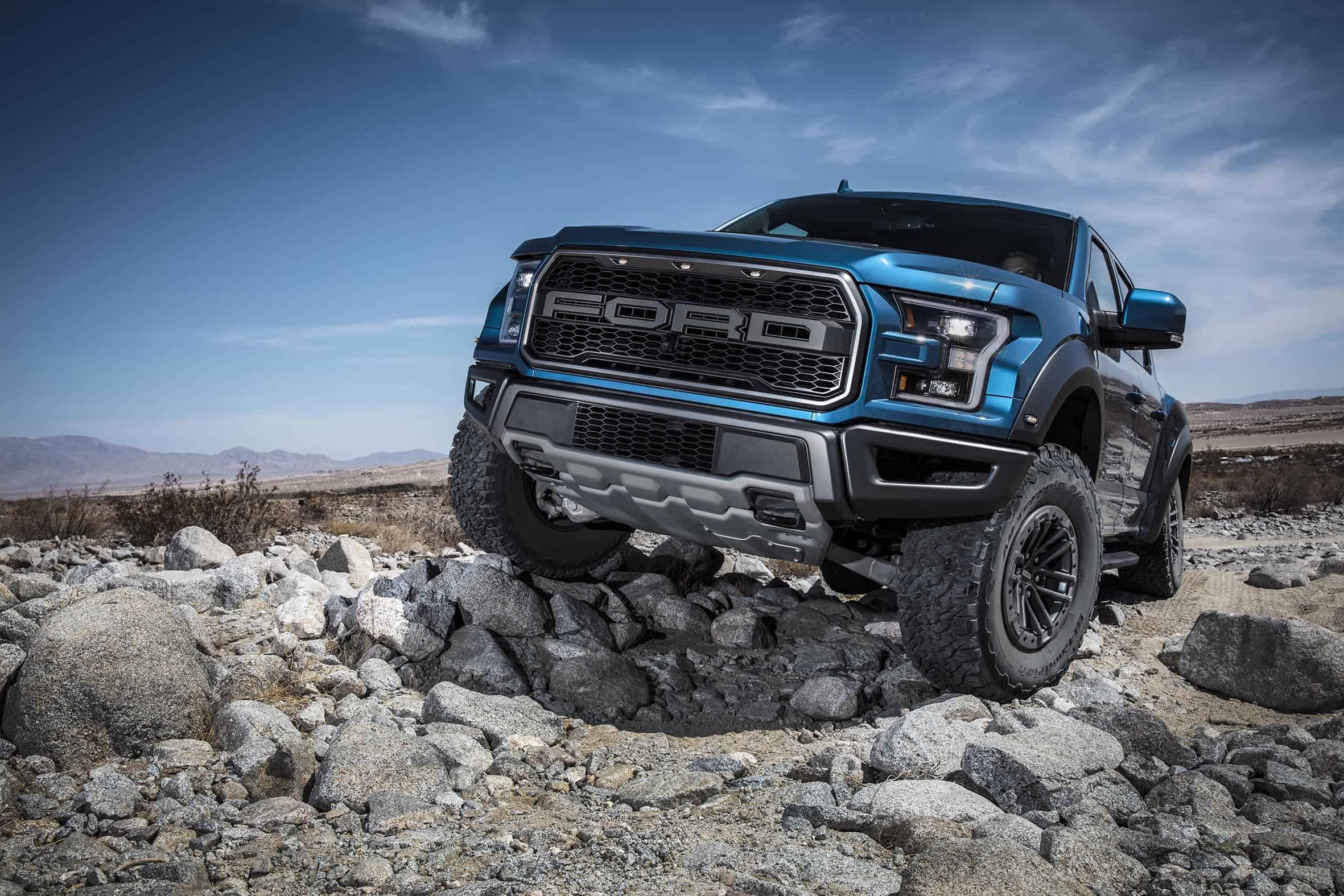 Next, we have another F-150 variation. This time it’s the critically acclaimed Ford F-150 Raptor. Famed as an off-road beast, the Raptor also boasts serious on-road performance. The secret to the Raptor’s speed and success is down to the truck’s burly twin-turbo V6 engine.

In terms of acceleration, this 450 horsepower beast can get the Raptor from zero to sixty in a speedy 5.1 seconds. While many Raptor fans might be reeling that Ford ditched the V8 in favor of V6, with performance statistics like that, how can you complain?

Now the legendary truck has enough road performance to compete with the fastest trucks out there. And thanks to the truck’s long-travel suspension and off-road lineage, it’s a veritable powerhouse out on the trails too. 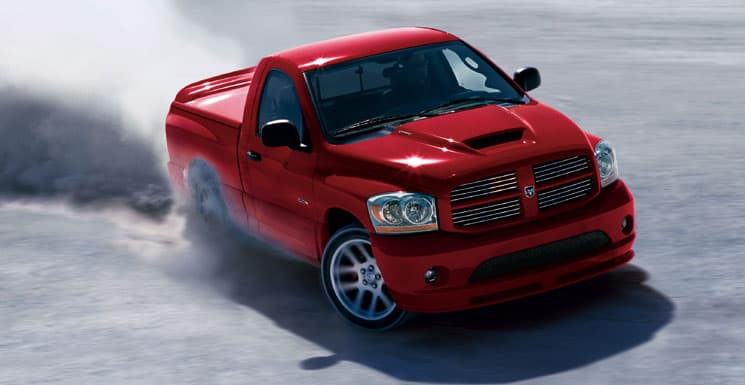 A list of fast trucks would certainly not be complete without the Ram SRT-10. This truck had a short-lived run, as it was only available from 2004 to 2006. This superfast pickup had the same V-10 engine that was featured in the Dodge Viper.

The engineers developed this bolt of lightning in 2004 using extensive wind tunnel testing and inserting a Viper engine, a 500 horsepower V10 that generated up to 525 pound-feet of torque. The top speed for this monster was 155 mph. “The only thing the SRT-10 needs is a big “No. 3” on the back window and a gun rack inside,” wrote one reviewer.

Capable of hitting 60 miles per hour in 4.9 seconds, this is one of the fastest truck models ever to grace the nation’s roads. 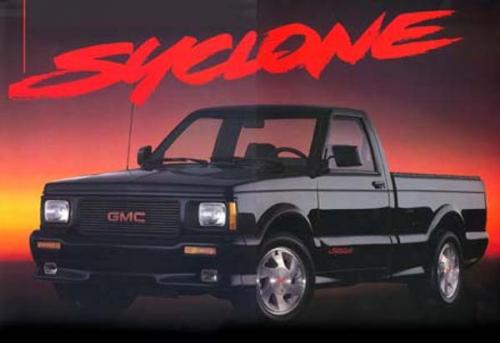 This is an oldie but a goody, and still one of the fastest production trucks in the world. The Syclone was only available for the 1991 and 1992 model years and less than 3,000 of them were ever produced making them very hard to find. Though they are rare, they’re incredibly fun to drive if you ever get the chance.

In a famous 1991 comparison test, Car and Driver compared the Syclone’s acceleration favorably to a Ferrari. The small pickup packed a wallop thanks to a turbocharged 6-cylinder 280 hp engine and all-wheel drive. The zero to 60 times conflict though.

Some boasting of seriously fast times like 4.5 seconds, while others have a more reserved (but still incredibly quick) 5.3 seconds. We’re giving it the benefit of the doubt and calling it at 4.5. 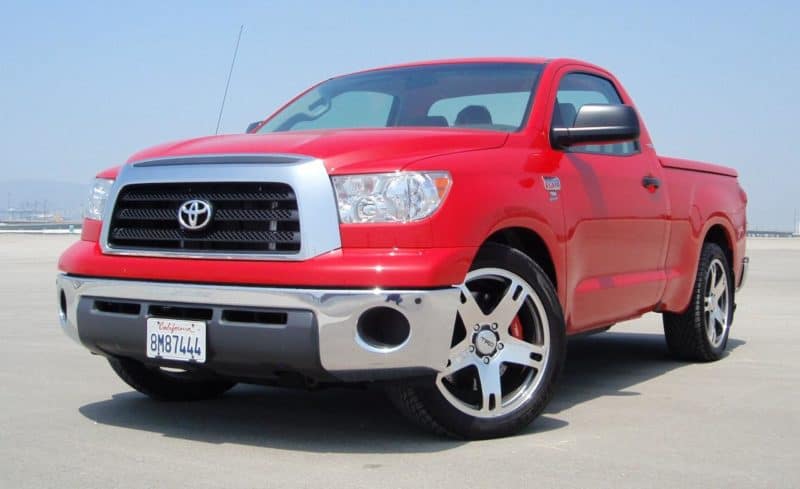 “Temporary Insanity” claimed one reviewer when this rocket hit the streets in 2009. The supercharger takes the truck’s 381hp, V-8 into the stratosphere with 550 pound-feet of torque and more than 500hp.

With TRD standing for Toyota Racing Development, the clue to this truck’s performance capabilities is very much in the title.

“Like driving a ballistic building,” wrote Car and Driver magazine. How fast is the fastest production truck in the world? Well, some say it can hit 60 mph in 4.5 seconds, though some daredevils claim that these fast trucks can hit 60 in as fast as 4.4 seconds. And that’s why it’s in the top spot on this list.

What Are The Fastest Production Trucks In The USA?

When it comes to finding a list of the fastest production trucks, you can always expect controversy. Performance statistics change depending on who’s recording them, and what’s fastest in one reviewer’s opinion won’t be the same as another reviewer’s ideas. Still, we have tried to put together a list that fairly represents the performance of the trucks on sale in North America, past and present, using data that has been corroborated by a number of sources. We accept that there’ll be some disparity, and our list is by no means beyond dispute. However, if you’re looking for a list of the fastest product trucks out there, all of our entries are worthy contenders.

What is the fastest production Dodge truck?

The Ram SRT-10 is considered to be the fastest production Dodge truck. It has a top speed clocked at 154.587 mph and a zero to sixty time of 4.9 seconds.

What is the fastest production GMC truck?

The Syclone is generally considered to be the fastest GMC truck made to date, with a zero to sixty time of 4.4 seconds.

What production pickup truck has the fastest top speed?

At 154.4 mph, the Dodge Ram SRT-10 is the fastest production truck in the world.

What is the world's fastest production pickup truck from 0-60 mph?

The Toyota Tundra TRD Supercharged has the fastest 0-60 mph time, clocking in at a scant 4.4 seconds.

Which production truck has the highest horsepower?

The discontinued Toyota Tundra TRD Supercharged has an unbeaten output of 504 horsepower, making it the highest horsepower production truck to date.

Which production truck has the most torque?

The 2019+ RAM Heavy Duty with 6.7-liter Cummins lays down a pavement churning 1,000 lb.-ft. of torque, the highest of any production consumer pickup to date.

Which production truck has the best fuel economy?

While not the fastest production pickups the current Chevrolet Silverado and GMC Sierra have the best fuel economy when fitted with the rear-wheel-drive 3.0-liter Duramax Diesel engine. This configuration offers an EPA combined fuel economy rating of 27 mpg.