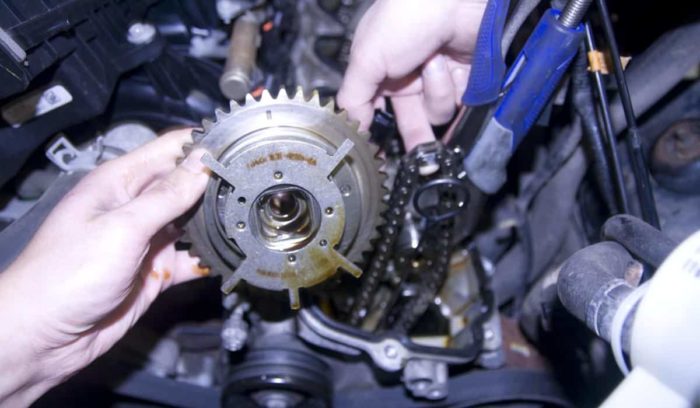 The Ford 5.4 Triton engine has been produced in millions of units and has successfully propelled at least a dozen different car, van, and truck models. It was a popular option all the way from its inception in 1996 to 2010, in all of its iterations. Today, it is still one of the most alluring options on the used car market, but before you start searching for the perfect driving mate with a 5.4 Triton engine, some important pieces of information should be taken into account. Here’s a list of 7 common problems the 5.4 Triton engine may face, which potential buyers might want to take a look at before purchase. 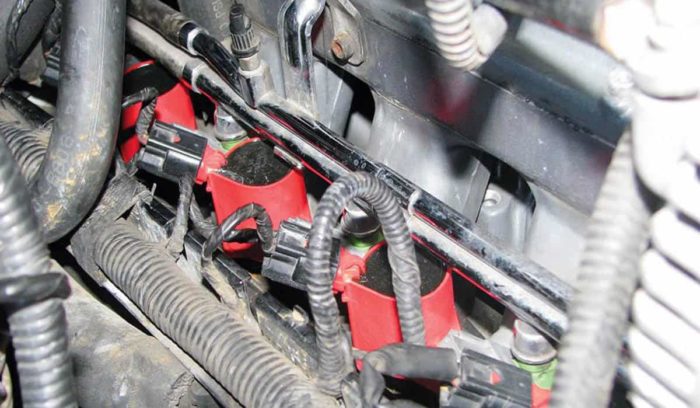 As it turns out, the 5.4 Triton engine has a coil-on-plug (COP) design – basically, a separate coil for each cylinder – all of which are positioned on top of a spark plug.

Problems emerge when rubberized covers on the coil boot deteriorate and cause the spark to hit the plug well instead of the plug. It is not unnoticed that some of the coils can fail internally due to liquid penetration.

Symptoms of an ignition system failure should be noticeable by the driver and include:

The problem does not require a massive investment, as the coils are rather simple to replace at any Ford dealership.

Ford technicians will diagnose the problem, identify misfiring cylinder(s), and replace the spark plug and coil where needed. 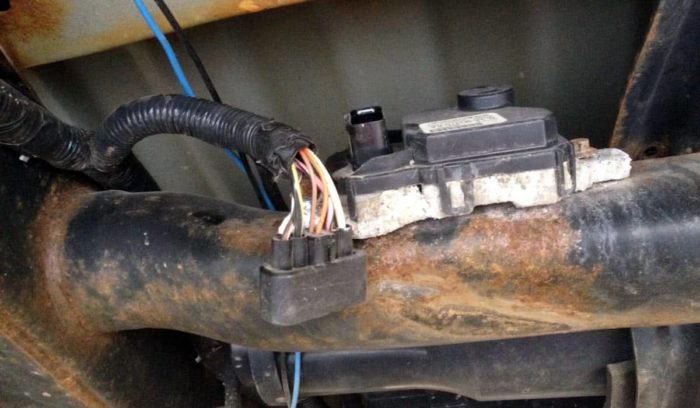 This problem is typical for the Ford F-150 with a 5.4 Triton engine. Failure of the fuel pump driver module usually cuts off the petrol feed to the engine which, of course, causes the engine to turn off, thus cutting power to all essential systems. This tends to happen on Ford trucks driving on highways (I don’t have to stress that losing power there is super dangerous). 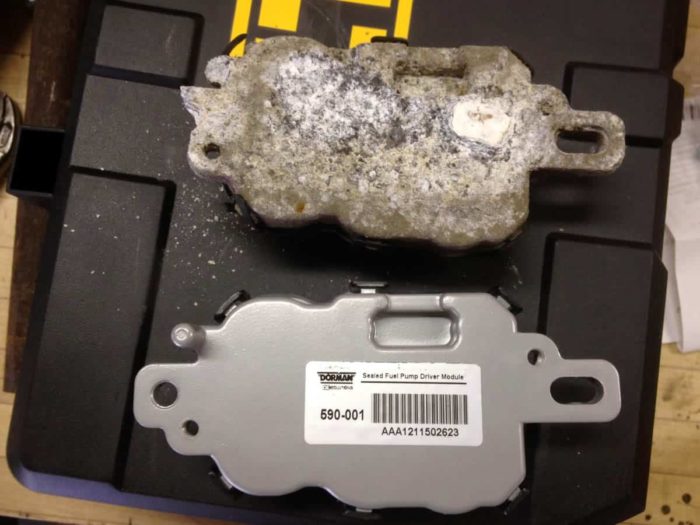 In the first place, the problem happens because the fuel pump driver module is directly attached to the steel frame. As its surface is exposed to the elements, salt, water, and dirt build up on its aluminum casing and cannot be washed away as it is in contact with the steel frame. Over time, vibrations, salt, and water do irreparable damage to the casing and dirt enters the driver module causing short circuits and making permanent damage to the smart junction box. 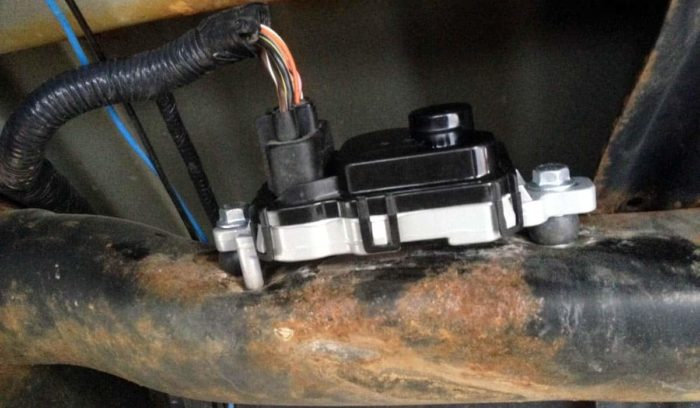 Sure, without fuel, that mighty Fort Triton won’t work.

As the fuel pump driver module is attached to the frame (at the rear end) with only two screws, replacing it is a DIY job. After Ford recognized this problem, they offered a slightly redesigned replacement part which is not in direct contact with the steel frame. Thus the dirt and salt build-up is evaded.

Symptoms of the damaged fuel pump driver module are as follows: 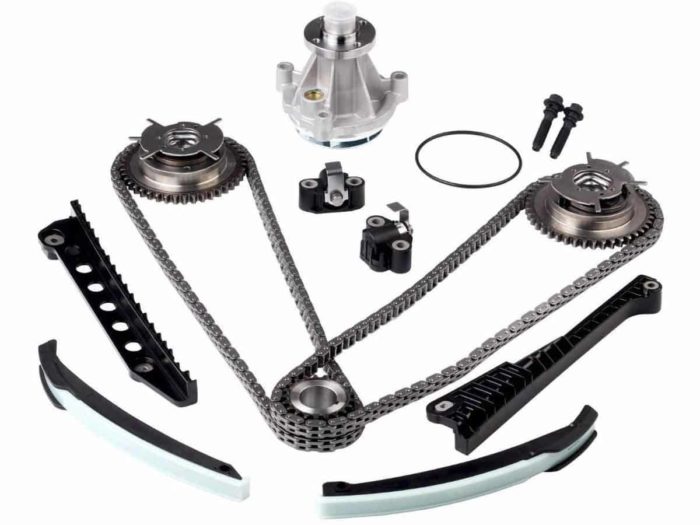 The engine sounds strange? You can hear a lot of knocking noises on acceleration, cold startup, or when you let off the throttle. While causes for such sounds can be numerous, owner experiences have shown that the most likely reasons can be blown out tensioners, a loose timing chain, and cam phaser breakage. Bear in mind that cam phasers are part of the Variable Valve Timing system which is an important component of the 5.4 Triton engine with 3 valves per cylinder. VVT hasn’t been installed in older 2 valve motors.

Having all these parts working correctly is crucial as all of them affect moving parts of the engine and, more or less, keep the engine from tearing itself apart.

Timing chain rattles are most noticeable at the very start. So, listen carefully for any unusual rattles after a cold start. If you can hear rattles, the timing chain may have become loose due to the blown out tensioner. In this case, the domino effect is more than likely. The loosened timing chain will rattle like mad and damage plastic timing chain guides. These plastic pieces can become fully detached from metal surfaces over time thus enabling metal-to-metal contact of the timing chain and metal carriers guides were attached to. No reason to tell you that this can damage the timing chain further. Plastic pieces, on the other hand, can fall to the oil pan and partially block the oil’s path. Remove them too. 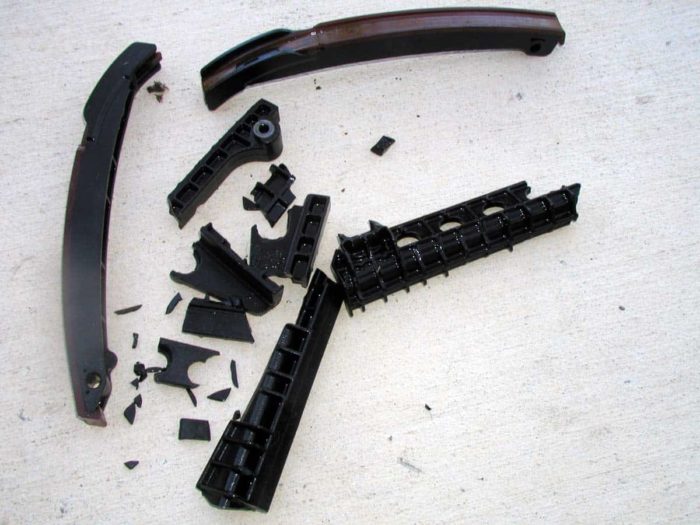 If some of the most important supporting pieces of the timing chain have been damaged, we should infer that the ignition and camshafts timing isn’t in accordance with the factory setting. This can lead to premature camshaft lobe wear, more stress on the cam phasers and, in the worst case, physical contact between pistons valves and other metal pieces. Thus, a full engine inspection should be performed.

As noted above, rattles, strange sounds, and a rough engine start are the most common symptoms for timing chain, tensioner, or cam phaser problems. 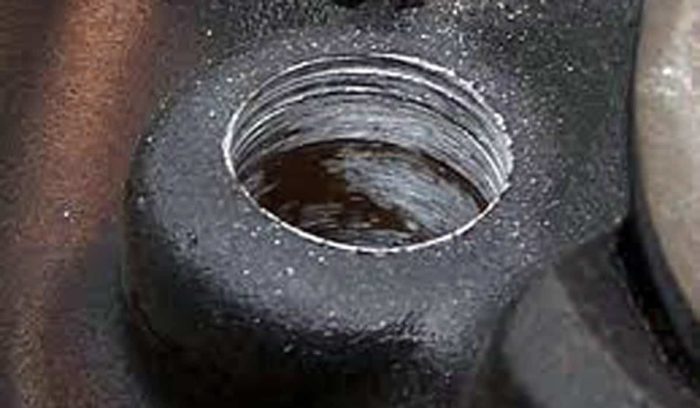 Blowing spark plugs with the engine running isn’t exactly what you would expect to happen often. Regardless, exactly this happened to some 5.4 Triton engines right from the start in 1997. We could even call this problem a common one for the Triton engines produced prior to 2004. Later on, they have the exact opposite problem (bear with us for that one).

Blowing a spark plug on the 5.4 Triton engine can have some serious effects. First of all, a blown spark plug will completely strip the threading of the aluminum head. Furthermore, it is not unheard of that a blown out spark plug breaks the ignition coil on the “coil over spark plug” design. It was one of the problems related to the first issue (the ignition system problems) I mentioned in the article. 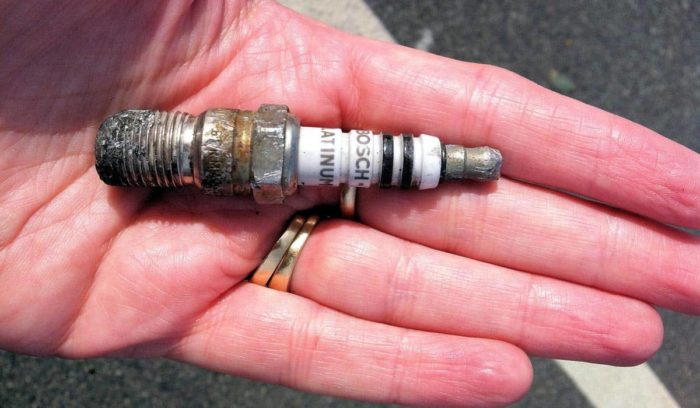 Interestingly enough, blowing out usually happens on the passenger side with the spark plugs on the third and fourth cylinder. The problem was so common that numerous aftermarket specialists did, in fact, provide tools and solutions to drill, retap, and rethread the spark plug hole in the head. Prior to this, the only viable solution was to actually replace the head altogether. That is what Ford technicians do advise to this day, despite the cost involved.

It is still a bit of a mystery of why this happens in the first place. Some can argue that there are not enough threads in the head for the spark plug to grab on to. Others debate about the problems with over-torquing or under-tightening. Nevertheless, the problem persists and one buying a vehicle with a 2 valve 5.4 Triton engine should be aware of the issues and thoroughly inspect the engine. 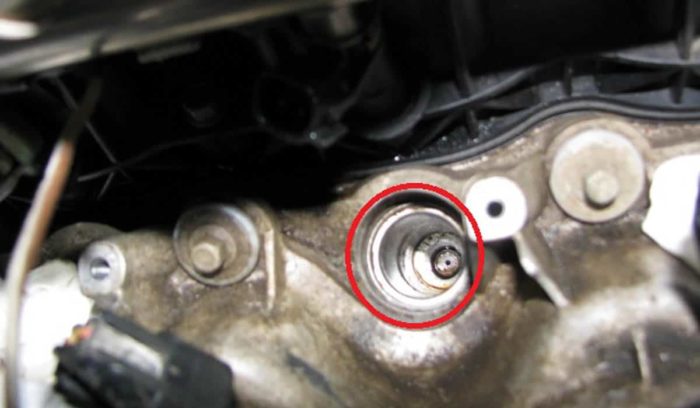 Interestingly enough, for the Ford Triton motors produced after 2004, owners and service technicians reported exactly the opposite problem with blown spark plugs. Now, they had begun experiencing problems during the replacement of the spark plugs. The spark plugs were so secure and so snug in their housings that upon attempting removal, the spark plug would often snap in half.

In the worst case scenario, spark plug fragments (parts of metal or ceramic) could end up in the cylinder. Since, it all has to be removed before starting up the engine, this could translate to a lot of work.

Cars with the 5.4 Triton engine mostly affected by this problem are:

Ford introduced an all-new spark plug design with a 2-piece shell for the 5.4 Triton engine. FordProblems explains it:

“At the end of the plug an electrode extends a bit beyond the threads and creates a gap between the plug and the cylinder head which gets filled with carbon deposits. The problem isn’t bad if treated at 30,000 miles, but over 100,000 miles – Ford’s recommended interval – it cakes the electrode in a concrete-like grip. Because the electrode is welded to the bottom part of the shell, it creates a natural breaking point.”

You see the problem. The spark plug simply sticks too hard making it rather difficult to remove.

Ford issued some tools for easier removal, but only an experienced technician with enough time on their hands can be certain of replacing the spark plugs without breaking them.

Engines with Variable Valve Timing (VVT) have numerous additional pieces which make possible slight timing adjustments to valve opening and closing operations on a running engine. This technology is created to provide certain advantages which benefit both fuel efficiency and maximum HP values. In short, cam phasers will move the camshaft a few degrees to one side or the other, thus affecting the cam lobes’ ability to open and close valves. At lower RPMs, for example, it is optimal to save as much fuel as possible so the cam will be in one position. On the other hand, if more power is needed, the cam phaser will move the camshaft affecting the position of the cam lobes and, of course, the speed and timing of the valve opening.

“The cam phasers allow the valve timing to be adjusted on the fly by using engine oil pressure to hydraulically rotate the input side of the cam phaser against the output side,” suggests Integrity Auto Works.

Now, on the 5.4 Triton engine, this hardware may be prone to failure. One may hear a rattling noise from the front direction of the valve cover. This noise usually points to a damaged, failed, or destroyed cam phaser (which would affect almost all other moving pieces in the engine)

The only reasonable solution is replacement with an all-new unit. Reasons for cam phaser failure may be related to excessive wear or failure of some sensitive parts of the cam phaser. Furthermore, as the engine oil pressure is used to rotate the input side, it is crucial to maintaining the engine as per Ford instructions.

It is crucial to inspect the timing chain and all other related hardware of the engine after cam phaser failure on the 5.4 Triton engine. 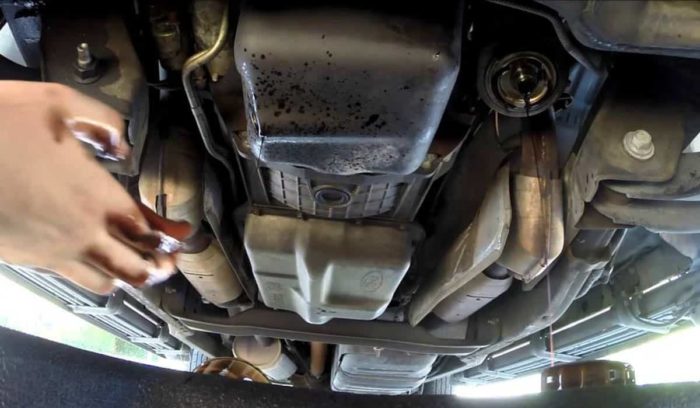 The engine oil pan gasket can develop a leak on the Ford 5.4 Triton engine. It is not a major issue as it is usually corrected with gasket replacement. However, on certain Ford F-150 models, the oil may leak on the hot exhaust system which results in a strong smell of burning oil. Not exactly a pleasant experience.

If you have any doubt of excessive oil consumption, you should first check oil pan for leaks and damage.

The process of replacing the oil pan gasket goes something like this:


20 of the Rarest and Coolest Pickup Truck Special Editions Y...
10 Most Expensive Production Pickup Trucks
Reviewing The 10 Best Car Vacuums of 2020
Ken Block Ford F-150 RaptorTRAX Is The Ultimate Toy For A Gr...
5 Little Known WD-40 Products Worth Having Around The House
DRIVEN: 2021 Toyota Tundra [Review]