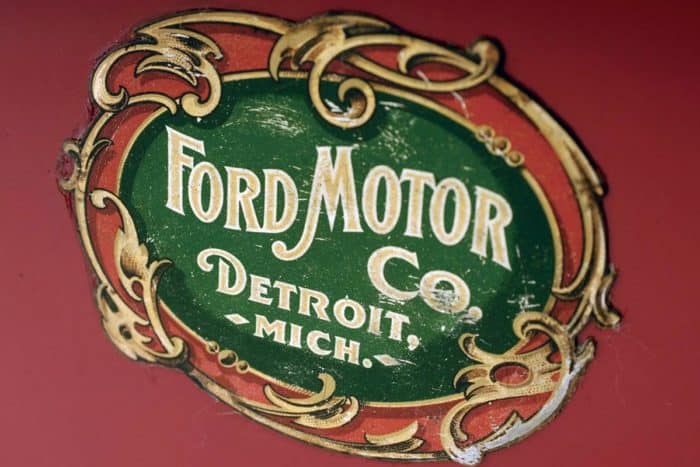 Now that we’ve sufficiently covered some important facts about the Chevy emblem, it’s time we turn our attention to the Ford emblem, which is easily one of the most recognizable emblems in the world – automotive or otherwise. Interestingly enough, the Blue Oval as we know it today has had quite the history, but the iconic lettering and its recognizable oval shape became Ford’s staple design all the way back in 1912. Changes throughout the years are somewhat apparent, though, and like the Chevy emblem, most things stay pretty similar through the decades. Also like Chevy, the Ford emblem does not come without its fair share of controversy.

1. The Lettering of the Ford Emblem we Know Today First Appeared on the 1903 Ford Model A

Although some used to suggest that the Ford emblem was actually Henry Ford’s signature, this theory was debunked decades ago. Ford disclosed that the Ford lettering we see today was actually designed in 1907 by Childe Harold Wills, a long time friend of Henry. 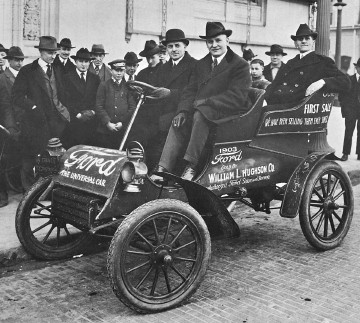 That said, we can’t help but be curious about what Ford was putting on their cars up until that point. After all, Ford had a solid lineup up vehicles in the few years before this mysterious logo appeared. What was going on the hoods of those things?

Googling some cars from before 1907 (like the first 1903 Ford Model A), I found out some strange occurrences of the same “Wills lettering” on them as well. Nothing conclusive to prove that the Ford emblem was designed prior to 1907, mind you. What is conclusive is this picture of the 1903 Ford Model A, which sports the recognizable Ford name at the front under which it clearly says “The Universal Car”.

This probably was just a marketing tool and not an actual Ford emblem. Definitely another thing Wills drew inspiration from before designing the emblem.

2. The Original Ford Emblem is Nothing Like Its Modern Counterpart

The official Ford emblem at the very start in 1903 was much more intricate than the Blue Oval we recognize today. It was a circle with art nouveau borders and said “Ford Motor Co. Detroit, -Mich.-” on it. This Ford emblem lasted from 1903 to 1907 when it was replaced by Wills’ “Ford” lettering, which did not originally feature an oval. In the meantime, however (after the Harold Wills Ford emblem but before the 1927 Blue oval), Ford had a new proposition with a blue-winged pyramid and the Ford signature on it in 1912, but Henry was not overly fond of it. It was declared obsolete the same year, but not before it reached the newspaper and city billboards.

3. Designers Have Made Eight Major Ford Logo Changes Since 1903 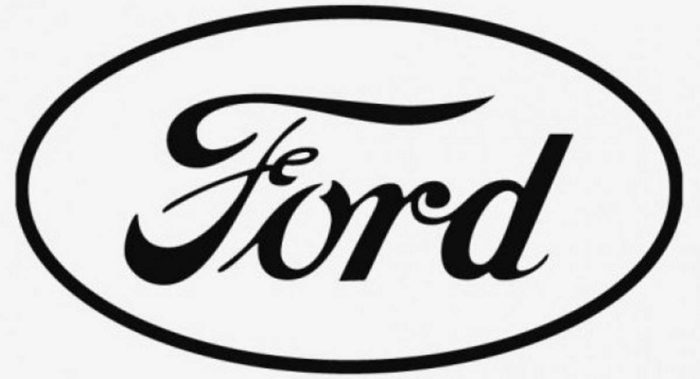 Obviously, we already learned that the Ford emblem changes were quite extensive and numerous for the first 25 years of the company. However, slight changes continued even after the chubby Blue Oval first appeared in 1927. In total, since 1903 until today, I counted eight major Ford emblem changes, all of which finally evolved to a rather sleek design that flourished in 2003 with the new “Centennial Blue Oval” – its official name. The chubby one from 1927 was replaced only in 1957 when Ford vehicles received a rather strange Ford emblem – not exactly an oval. 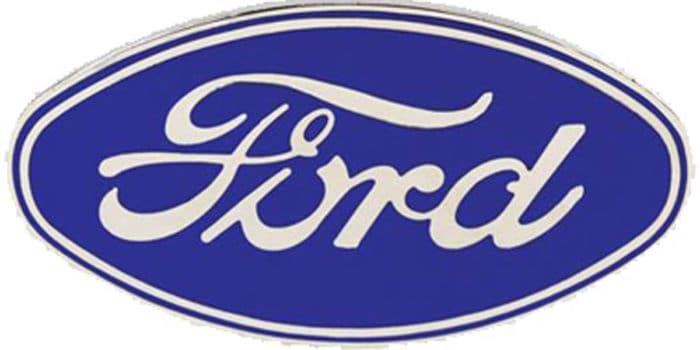 Apart from the sheer shape of the logo, even the Ford lettering evolved.

The first major departure from the 1903 design happened in 1906 with the so-called “script with wings.” This script saw the addition of long-tailed “F” and “D” letters. This logo was used on all Ford cars up to the end of 1910. It was then that we got the first glimpses of what would become the signature Ford script to this day. 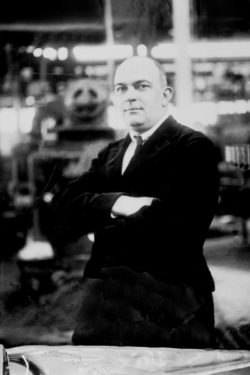 Unlike the Chevrolet original logo design theories, it seems that the Ford emblem’s early days weren’t as intriguing. Designer and longtime friend of Henry Ford Childe Harold Wills designed the logo in 1907 using the lettering from a stencil set his father used for making business cards. It’s not exactly exciting, but it does have kind of a cutesy homegrown attitude to it. Ford’s official site does have something to say about the whole thing too:

“Childe Harold Wills designed the Ford logo. He used his grandfather’s stencil set, which was based on the style of writing taught in schools when Ford and Wills were children. However, the Ford oval would not be featured on a car until the 1927 Ford Model A,” says Ford.

It was difficult to pinpoint the exact time when the Blue Oval nickname actually became common, but some quick research did showcase that the use of the phrase “Blue Oval” surged In 1907. This certainly wasn’t thanks to the Ford emblem in the US since they didn’t use the recognizable oval shape until much later. Was it because of UK Ford? Perhaps!

6. The 1960’s Nearly Saw a Total Redesign of the Ford Emblem

A picture is worth 1,000 words! As I believe this saying to the letter, you will have a chance to see every known Ford emblem which appeared over the years here. What is more, I found out that the Ford emblem could have been dramatically different compared to what we know today. 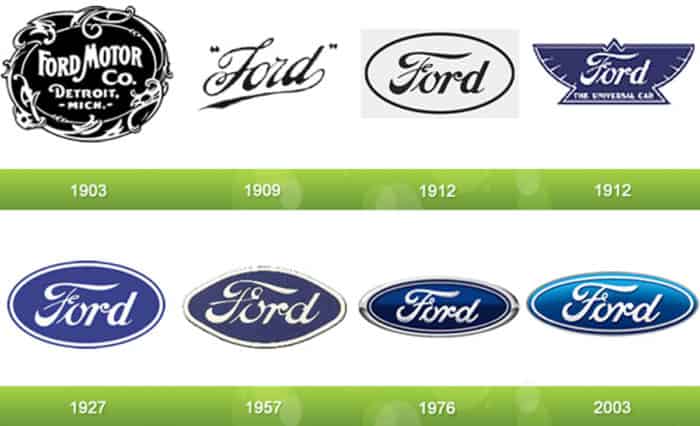 Back in 1966, Henry Ford II hired known logo designer Paul Rand to come up with a whole new design. The proposed solution was too radical for Henry Ford II, so the more conventional emblem prevailed. I have the picture of what could have been accepted as the new emblem back then. Quite a striking design, wouldn’t you say?

Interestingly enough, although Ford officially claims that Ford’s signature ended up in an oval only in 1927, Ford Motor Company Limited of Great Britain actually used the oval since the very beginning in 1907. The oval was iconic enough that it came to represent all Ford UK cars.

I have to point out that some of the Ford USA cars featured the oval emblem before 1927. Yet, the first official car to bear the Blue Oval Ford emblem was the 1927 Ford Model A.

7. The Color of the Ford Emblem Changed Slightly in 2003

Not that simple though!

See, the latest iteration of the Ford emblem appeared in 2003. Celebrating the 100th anniversary of the company, Ford released the Centennial Blue Oval. Compared with previous iterations of the logo, this one does not seem to be much different. Not at the first sight, that is. However, upon closer inspection, the latest Ford logo is by far the sleekest (I know you dislike this word, but it is sleek, clean and just nice).

See, the blue logo received white tint and lustrous 3D shading. A gradient blue prevails as the background for the signature Ford lettering while the silver edges turned white. It does seem to be flatter and more two-dimensional as well. All in all, it’s somehow sophisticated in its simplicity.


The Best (And Worst) Of 2021 Volkswagen
10 Facts You Didn't Know About Off Road Diesel
Ken Block’s 14 Year Old Daughter Wrangles 1,400 Horsepower i...
8 Cheaper and Equally or More Powerful Alternatives to the P...
The Best Cars of 2018
The History of Fisker Automotive