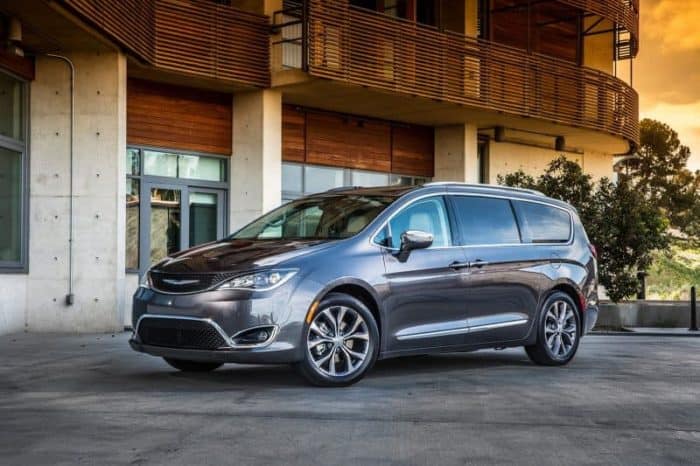 The crossover and SUV craze might have taken a bite out of them, but minivans are still holding out, somehow. The first Chrysler minivans have done more for the U.S. car industry than arguably all modern crossovers put together. The minivan didn’t only revolutionize the way cargo and passenger transportation was being conducted back in the day, but also saved the third biggest U.S. car manufacturer from certain downfall. The minivans didn’t just fill in the vacuum that existed in the market, however, as their job was already being carried out by station wagons. Instead, they practically condemned the beloved wagons to obscurity and some car enthusiasts – yours truly included – will never be able to forgive them for such culturcide.

Of course, karma is a b**** as we all know it, hence the crossovers swooped down on minivans in a similar manner. Yet, as long as there are buyers willing to look past their shortcomings and focus exclusively on their advantages – which are plentiful by the way – both the minivans and wagons will still have their place in a modern world ruled by crossovers and SUVs.

As far as minivans are concerned, their combined sales amounted to 484,618 units for the entirety of 2017, which is the first time they fell under the 500,000-unit threshold since 2011. With no new arrivals in sight for MY 2020 and with the Dodge Grand Caravan’s almost certain demise by then, this negative trend is expected to continue for a while. Before the next-generation of all-electric minivans like the VW I.D. Buzz come to rescue the day, anyway.

Without further ado, here are the best available 2020 minivans we can expect to see enter the market. Since the 2020 U.S. minivan market will most likely be 4 models deep, we’ll list all of them ranked from worst to best. The selection might be sparse, but that doesn’t mean the commodity is rotten. Only a bit stale, perhaps.

2020 is the South Korean manufacturer’s minivan’s sixth year on the market and some grey hairs are now undoubtedly visible. However, the Sedona, like most Kia vehicles, looks surprisingly good at the moment. Moreover, not counting the internal combustion version of the Chrysler Pacifica (now called Voyager), the Sedona is also the most affordable of the lot starting from exactly $27,000.

Then again, the base V6 Pacifica/Voyager only undercuts it by $5, so you won’t get more than an overpriced cup of coffee by going for it instead of for Sedona anyway. On the other end of the scale, the range-topping Sedona SX Limited costs exactly $42,000.

The 2020 Kia Sedona didn’t receive any cosmetic updates as it’s carried over unchanged from previous year. After all, it’s just been updated for MY 2018.  What’s more, the minivans have a longer life span than passenger cars and crossovers due to lower demand, hence the next-generation models are still far away.

Regardless of a choice in trim level, every Kia Sedona comes with a 3.3L V6 engine, a front-wheel drive configuration, and an 8-speed automatic transmission. The setup is good enough for 276 horsepower and 248 lb-ft of torque.

As mentioned above, the Sedona’s main attribute is its affordable price, together with sharp looks and very good driving dynamics for its class. Although it’s currently only better than the soon-to-be-discontinued Dodge Grand Caravan in terms of overall scores, the 2020 Kia Sedona will still be a relevant choice on the minivan market. 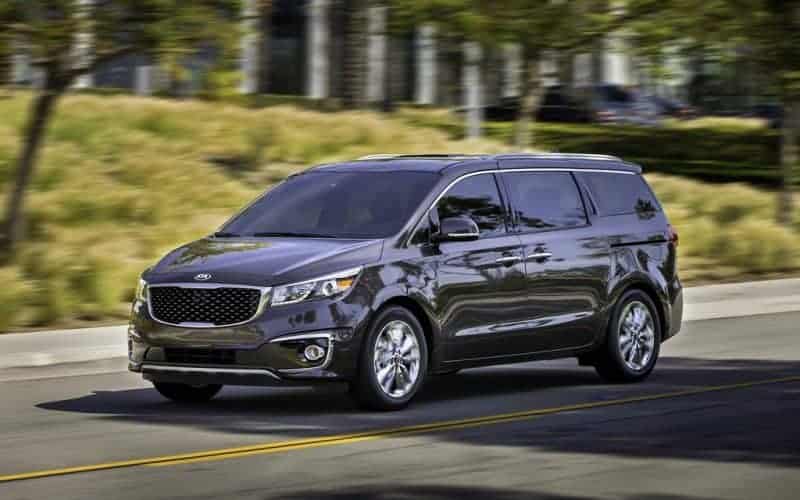 Aside from rather ungainly looks, the Toyota Sienna isn’t at all that bad of an option when it comes to minivans. Currently in its third generation since 2010, the now-venerable minivan continues basically unchanged through MY 2020. It did receive the current-generation’s second mild facelift for MY 2018 after all. The only news worth mentioning is the all-new Nightshade Edition available for $700 extra with the SE and SE Premium trims, and addition of Apple CarPlay and Amazon Alexa compatibility.

Starting from just over $31,000, the base Toyota Sienna is actually the most expensive entry-level minivan currently on the market if we exclude the Chrysler Pacifica hybrid. However, it also offers more advanced features than the Sedona, for instance.

Other than that, the mid-range SE Sienna also comes with a sportier suspension, but don’t expect a truly sporty drive from it. The Sienna is a safe choice that doesn’t excel when it comes to innovation, but offers a few details which every other manufacturer could have, but didn’t.

Speaking of which, the Toyota Sienna is the only minivan on the U.S. market with an available all-wheel-drive platform which makes it a favorite in colder parts of the country. It’s also got a punchy 3.5L V6 engine that develops 296 horsepower and 263 pound-feet of torque – more than any other option on the market. It pairs with an 8-speed automatic gearbox that gives a somewhat modern feel to the otherwise aged vehicle.

Finally, compared to its market opponents, the Sienna also boasts by far the most in-class cargo space with 39, 87, and 150 cubic feet of room respectively when all seats are up, only the last row is down, or the last two rows are folded.

Aside from its questionable design and poor mileage scores – the latter of which are understandable considering the extra power the Sienna offers – Toyota’s minivan also fails to impress in crash tests. The IIHS rates the Sienna “Acceptable” in driver side tests and only “Marginal” in passenger side tests. It’s also the only model that’s failed to receive the Top Safety Pick award of all tested U.S. market minivans in 2018 (Sedona and Grand Caravan didn’t feature in the tests at all). 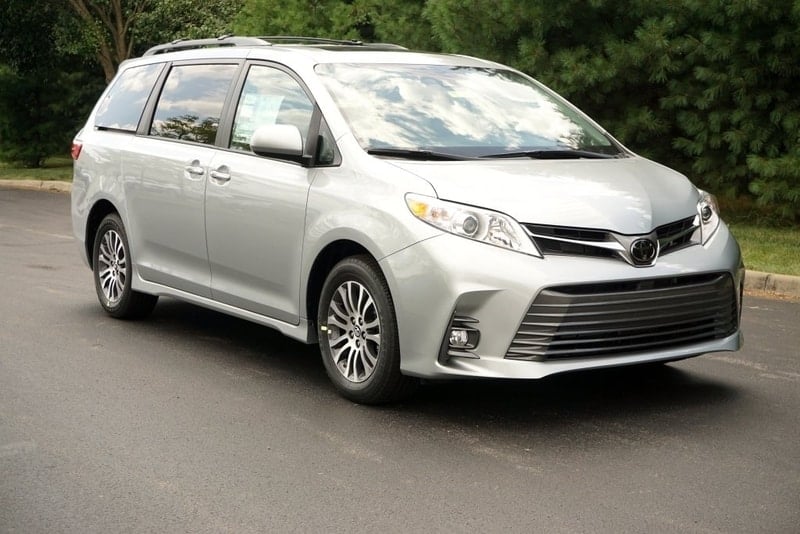 Together with the brilliant Chrysler Pacifica, the Honda Odyssey is probably the best minivan money can buy at the moment. The entry-level models start from $30,000, and although the range-topping Odyssey Elite costs a whopping $47,000, it’s loaded with both safety and convenience gear like front and rear parking sensors, a lane departure warning, a forward-collision warning, a multi-angle rearview camera, and a rear seat monitor to keep the occupants, well… occupied.

Being only recently introduced for MY 2018, the fifth-generation Odyssey is still practically a new car and will likely continue the way it is at the moment for a considerable time. In that respect, the 2020 Honda Odyssey carries over mostly unchanged but does get special badges and wheel designs in order to commemorate the nameplate’s 25th anniversary. Considering the sheer number of advantages it holds over most of its rivals, that doesn’t necessarily have to be a bad thing for the best Japanese people hauler on the U.S. market at the moment.

Like most minivans out there, the Odyssey only offers one available engine. A powerful 3.5L V6 produces a healthy 280 horsepower and 262 pound-feet of rotational force. As we’ve already mentioned before, only the Toyota Sienna can be ordered with an optional all-wheel drive, hence the Odyssey comes with mandatory front-wheel drive.

Where the Odyssey minivan excels is its standard 10-speed automatic transmission with paddle shifters (new for 2020). Thanks to the advanced transmission, the Odyssey accelerates quicker than its competitors, and handles like a charm.

In terms of available cargo space, the Odyssey rates almost as good as the class-leading Sienna. It offers up to 33, 89, or 145 cu ft of room depending on the chosen seat configuration. When all of the aforementioned is taken into the equation, the 2020 Honda Odyssey easily pulls away from the rest of its competitors. All save one, to be more precise. 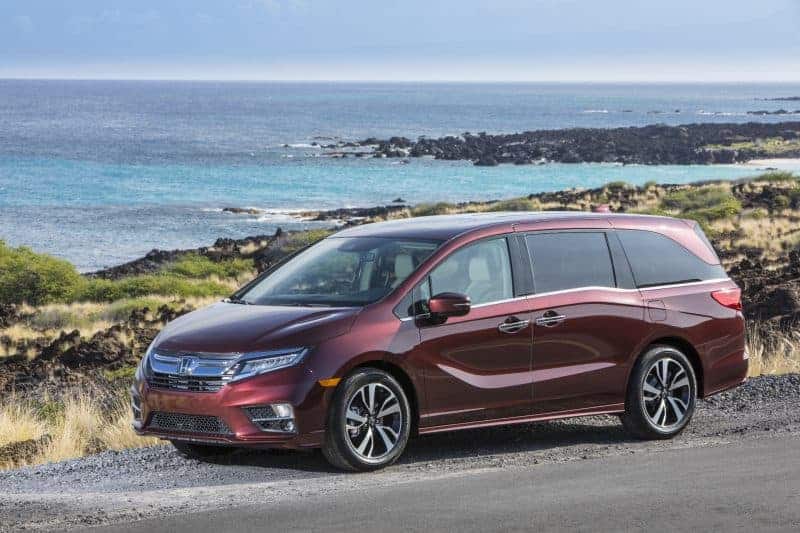 Arguably the best minivan on today’s market comes from the automaker that started the trend some 35 years ago. It’s fitting really, but the entry-level luxury minivan can also be quite expensive. The base models now moved under the Chrysler Voyager nameplate start from family-friendly $27,000, but expensive options and plushier trim levels can quickly raise the Chrysler go-to minivan’s price tag to north of $44,000. Furthermore, the much-hyped Pacifica hybrid starts from an already-high $40,000 before the incentives, whereas the range-topping hybrid Limited warrants the hefty $45,000 sticker.

Apart from being the most refined of the lot, the Pacifica minivan also boasts one of the cleverest Stow N’ Go folding seat systems out there which lets the floor completely engulf both rear rows of seats for maximum cargo space. Can’t do that with all-wheel drive now, can you?

The list of available amenities even includes a built-in vacuum cleaner alongside all other advanced convenience and safety features. Being introduced for MY 2017, the 2020 Chrysler Pacifica gets a number of changes in available equipment across trims and trims themselves, but other than that (and the return of the Voyager nameplate), nothing else has changed.

The conventional Chrysler Voyager and Pacifica models sport a sturdy 3.6L V6 engine which offers 287 ponies and is tied to a 9-speed automatic gearbox. The Pacifica hybrid, on the other hand, cranks up a slightly lower 260 horsepower of total hybrid output thanks to the same Pentastar engine. It also gets a special CVT transmission and a 16 kWh lithium-ion battery pack which allows the plug-in hybrid minivan a healthy 33 miles of electric-only range that should suffice for everyday carpooling needs.

Being a hybrid, the Chrysler Pacifica understandably sacrifices some of its potential cargo space and manages to offer 32, 88, or 141 cubes of space in three respective seating configurations. Thing is, the internal combustion engine models offer the same amount as their hybrid siblings.

Yet, the Chrysler Pacifica minivan’s biggest advantage has to be its 32 mpg combined fuel economy or 84 MPGe when the electric part of the powertrain is included. The regular models only manage 22 mpg combined but then again, neither of Pacifica’s competitors is any better than that.

All things considered, the Chrysler Voyager, Pacifica and its hybrid iteration are the best 2020 minivans we can expect to see on the market. 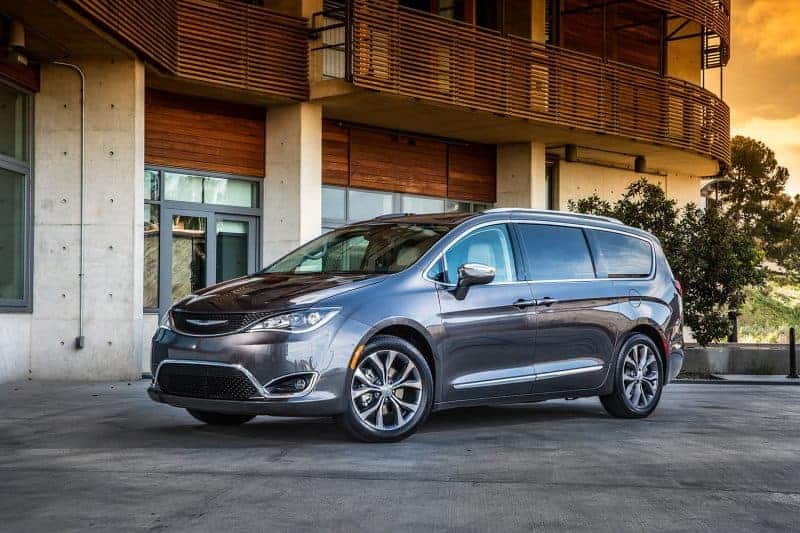