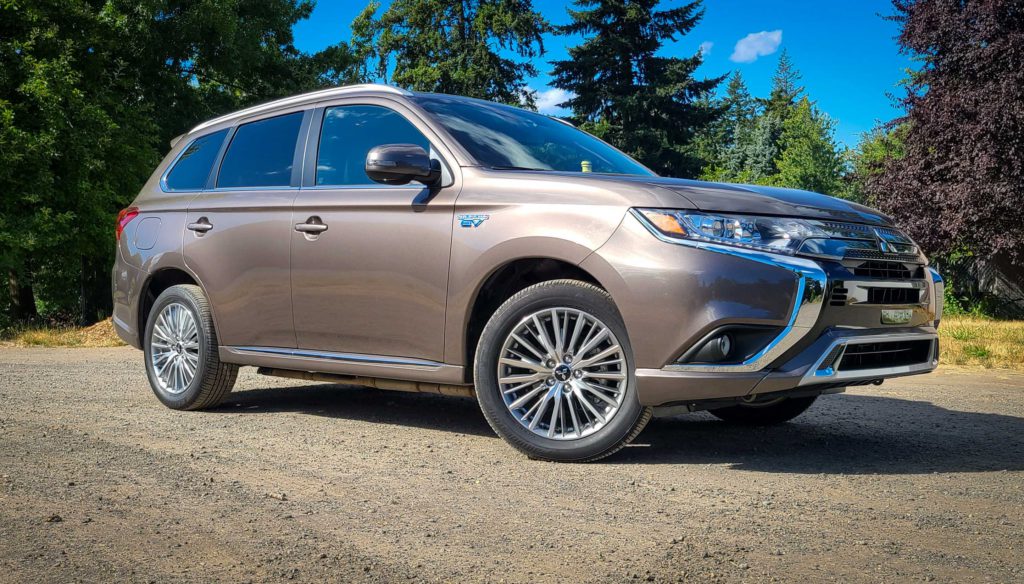 As of 2020, the company had sold roughly 270,000 of these since debuting in 2013. (North America didn’t get this model until 2018.) For 2021, Mitsubishi amped up its all-wheel-drive Outlander PHEV hybrid. Literally. For ’21, the company added a bigger engine, a bigger electric motor, and a bigger battery pack resulting in more power. But with more AWD PHEV competition, does it have what it takes to continue to sell?

Now, don’t get this model confused for the all-new 2022 Mitsubishi Outlander. That’s an entirely different vehicle that shares a platform with Nissan’s recently redesigned Rogue. Instead, Mitsubishi is marching on down the path of electrification using the older Outlander platform — it’s the same exterior as it’s been for the last few years. And despite the chassis being long in the tooth, the hybrid powertrain is high-tech and has a lot to offer. 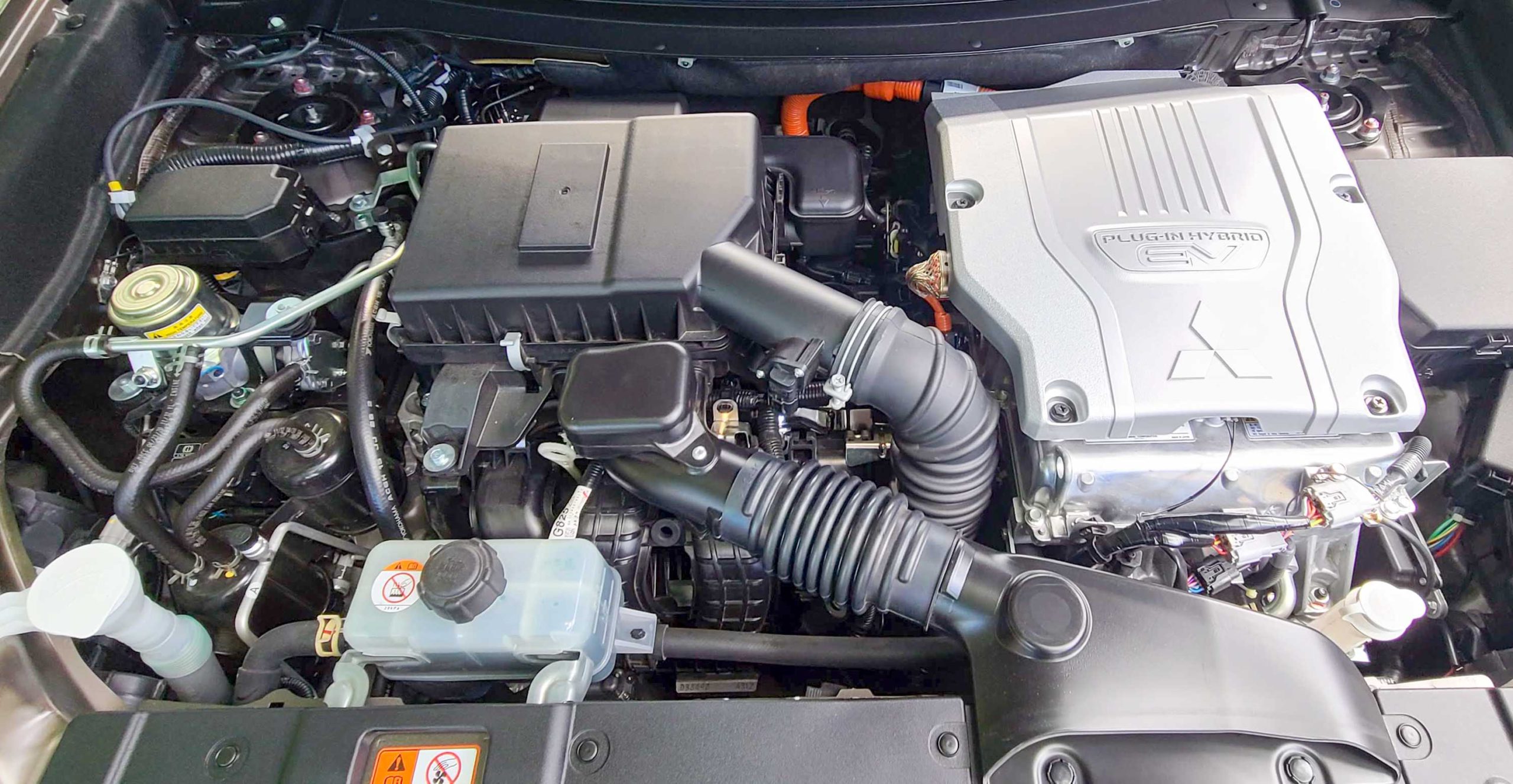 Despite this bump in power, the vehicle gets the same 74 MPGe rating through a combination of gasoline and electric operation and actually increases its all-gas mpg from 24 to 26. The total EV range has gone up from 22 to 24 miles as well, thanks to the larger battery pack. The combined gas-electric range is 320 miles. 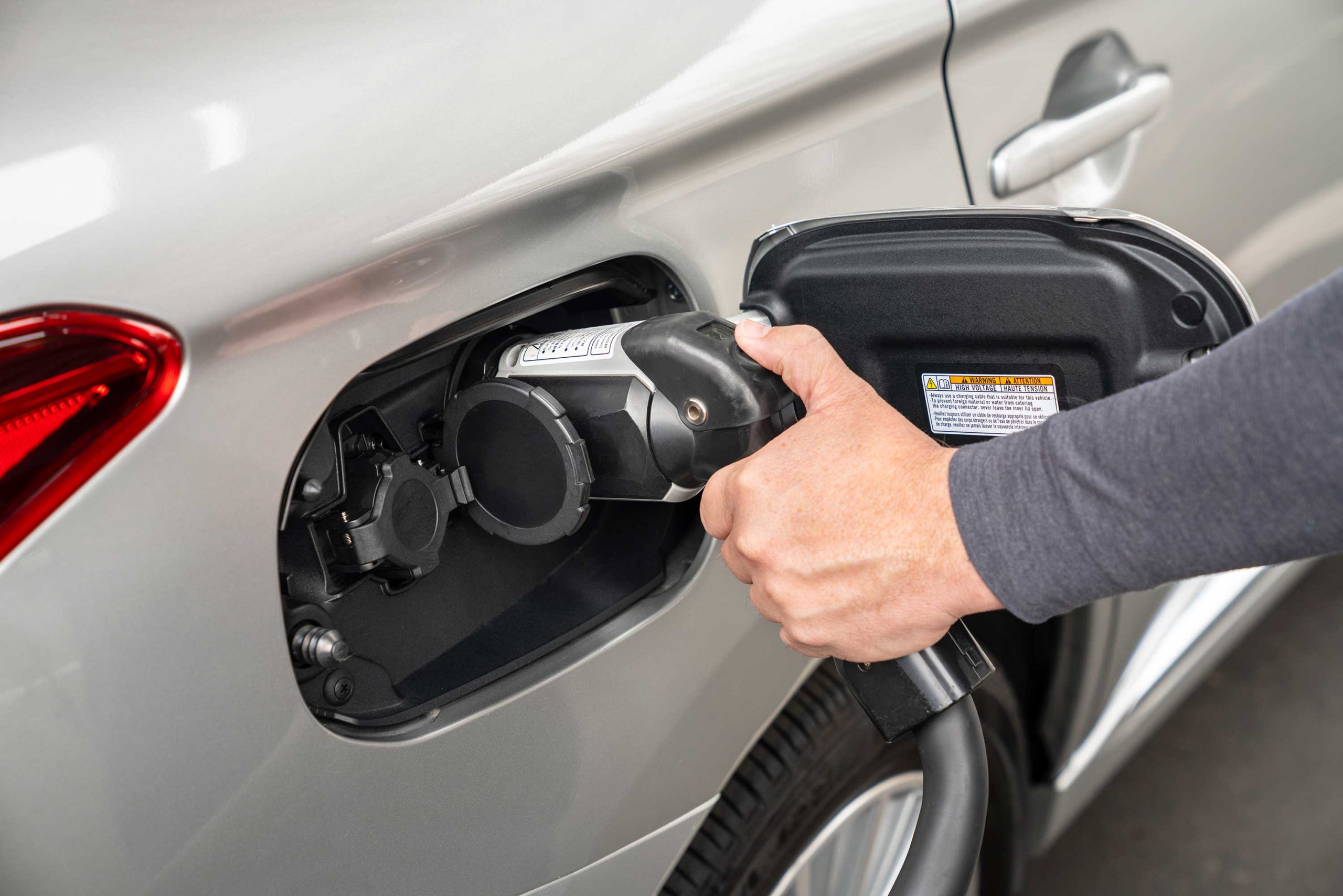 When it comes time to plug in this hybrid, you have some options. Pop the charger door and there’s both your usual charge port but also a CHAdeMO fast-charge socket. This enables buyers to charge 80% of the vehicle’s battery in 25 minutes. A standard 120V charge will take up to 14.5 hours at 8 amps and 9 hours at 12 amps. You can expect a four-hour charge with EVSE at 240V at 16 amps.

I’ve driven a 2019 Outlander PHEV in GT trim. Despite the sporting moniker, there wasn’t much “GT” about it. Power was merely adequate. The 2021 version definitely has more pep. Step on the accelerator, and you’ll immediately notice the torque. You actually get pressed back in your seat.

I wrote that Mitsubishi’s previous model was “brisk up to about 40 mph.” The new model with its extra power feels much peppier. And while the 2021 Mitsubishi Outlander PHEV is not going to win a lot of drag races, the power is much appreciated and very usable compared to previous models. Around town is where you really notice the extra giddyup. Initial acceleration feels much improved. Oh, and now there’s even a Sport mode for extra performance. 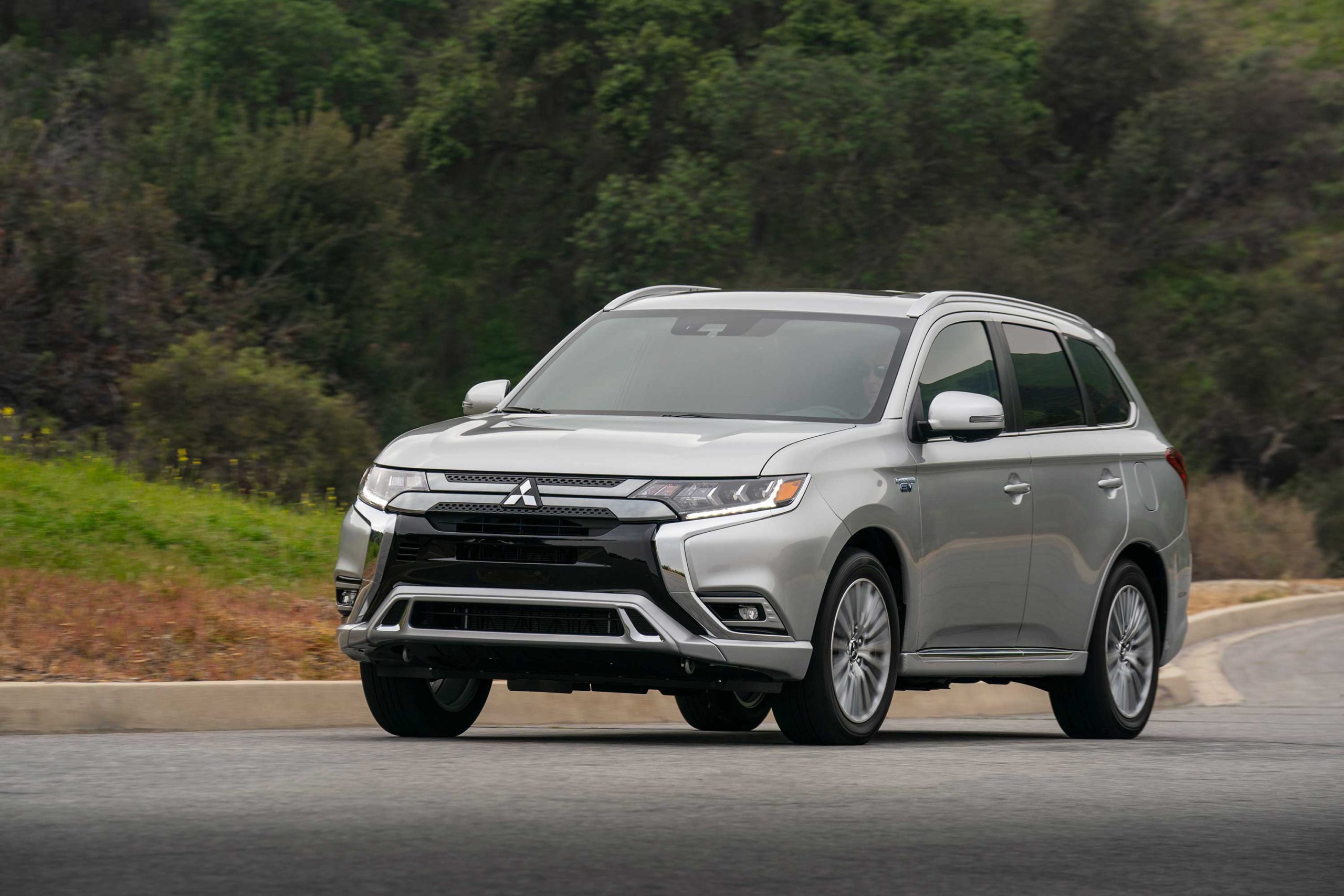 The Outlander PHEV always rode well and the 2021 model continued to do that. It was a comfortable cruiser and quiet around town and at highway speeds. I found there was a bit of road and wind noise on the freeway, but nothing too offensive.

The car’s handling was still better than I expected. Despite its 4,244-pound curb weight, the CUV handled the corners better than one would expect. With 54%/46% front/rear weight distribution and 225/55R18 tires mounted to rather beautiful 18×7 alloy wheels, you might actually find the car more entertaining in the curves than you’d think.

Should the weather take a turn for the worse, the Outlander PHEV has you covered with its S-AWC, or Super All-Wheel Control system. It has three AWD modes (normal, snow, and lock) for varying road conditions. It also comes with blind-spot monitoring, a lane departure system, as well as a host of other multi-letter safety acronyms.

The car’s interior isn’t much to write home about and hasn’t changed over the years. Overall, it felt dated with a mixed bag of materials. It was, however, simple and had excellent visibility. But certain bits felt inexpensive. The SEL’s eight-way adjustable leather front seats were somewhat flat and lack bolstering. The silver carbon fiber-esque trim was also a love-it-or-leave-it look. 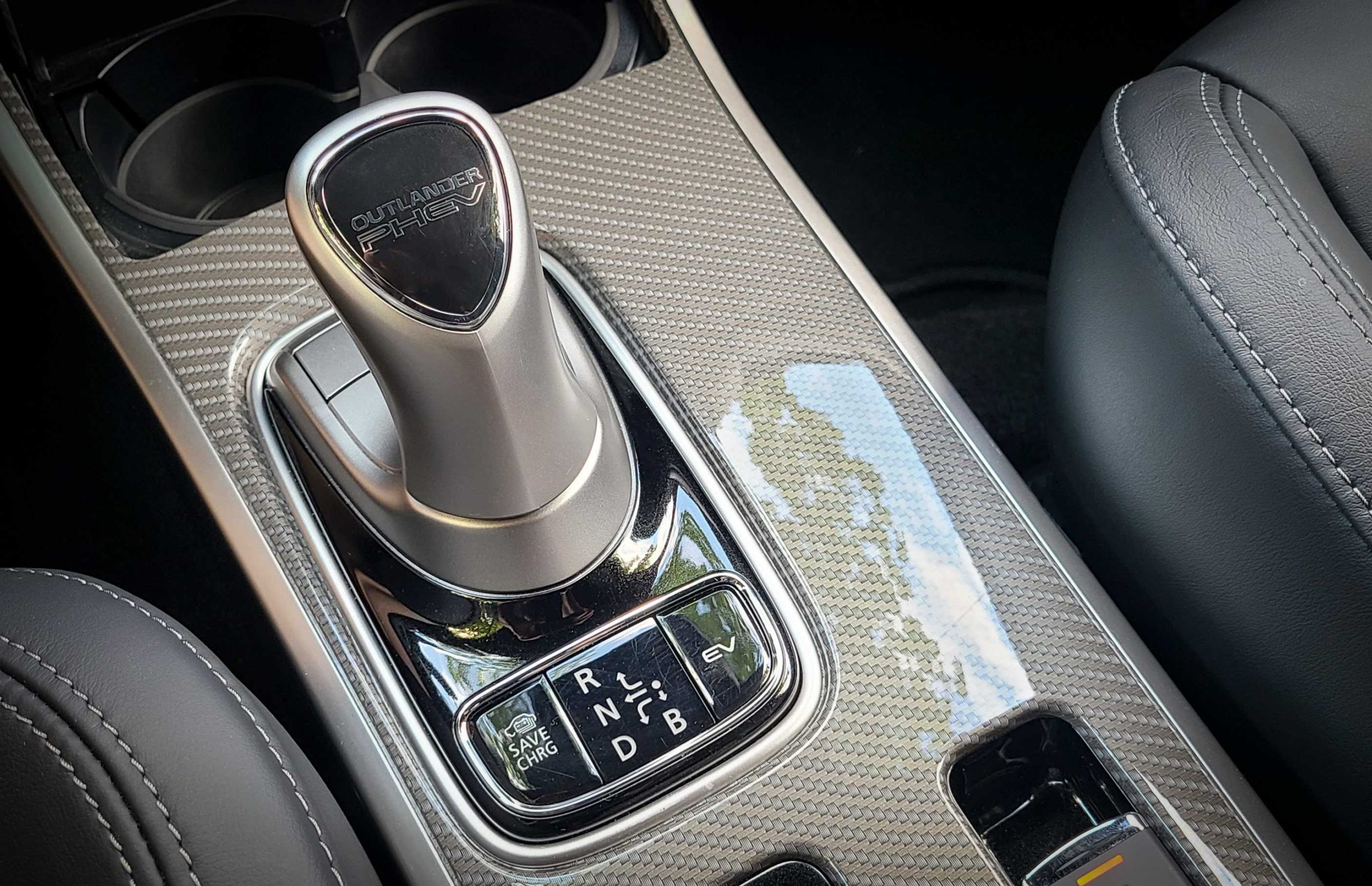 The infotainment center had Apple Carplay and Android Auto, but the interface wasn’t great. The touchscreen had no buttons or knobs, which was cumbersome. There was a dash-mounted USB port as well as a 12-volt plug-in. However, passengers in the back seat got two USB ports, and the rear cargo area gets a 12-volt/120W plug-in. Other features included heated exterior side mirrors, forward collision mitigation, and Mitsubishi’s FAST-key system. A power sunroof is available on LE and GT trims.

The rear seating area offered good space and the rear cargo area was expansive. And while the gas-powered Outlanders have seating for seven, the PHEV variant only has seating for five. Ironically, Mitsubishi simply kept the cupholders in the rear area. Hey, great for tailgating, I suppose.

The rear seats have a slick, three-step folding sequence allowing them to fold totally flat. This allows the CUV to carry a healthy bit of cargo. For what it’s worth, you could lay down a couple of sleeping bags and sleep comfortably in this area if you wanted. The Outlander PHEV also has a power liftgate. However, I found its operation was finicky.

2021 Mitsubishi Outlander PHEV VS. the Competition 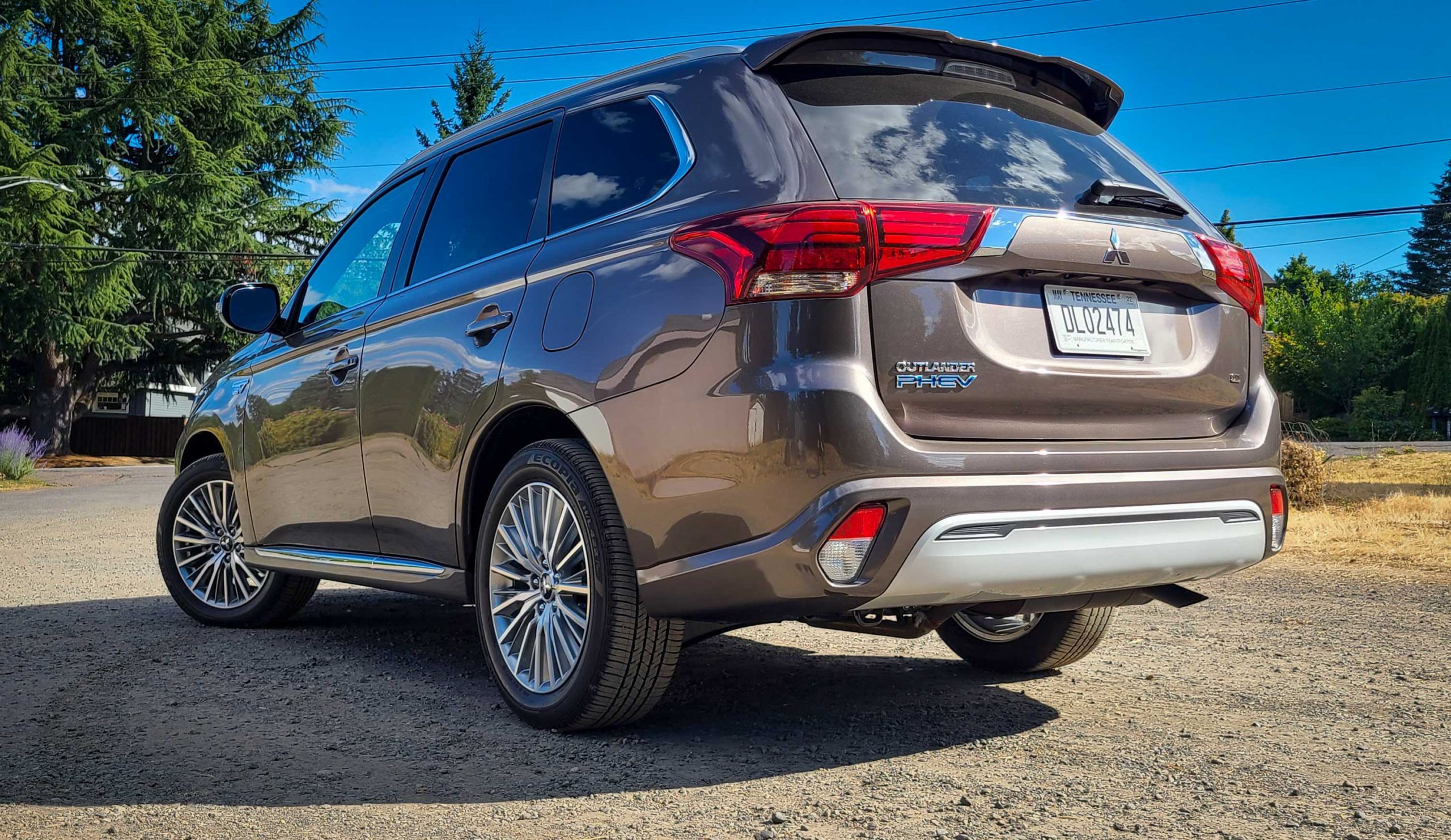 Let’s face it — the 2021 Mitsubishi Outlander PHEV is a dated platform. While it may have been one of the first PHEV CUVs, as well as the best-selling, it has aged. The Ford Escape gets 105 MPGe vs. the Outlander  PHEV’s 74 and has 38 miles of pure EV range. The Escape, however, is FWD only.

The Hyundai Santa Fe PHEV gets 76 MPGe and has 31 miles of EV range. The Subaru Crosstrek Hybrid gets 90 MPGe but only 17 miles of pure EV range. Finally, the Toyota RAV4 Prime gets 94 MPGe, 42 miles of pure EV range, and is paired to a powerful 302 hp powerplant, rocketing the Toyota from 0 to 60 in a scant 5.4 seconds according to Car and Driver. For comparison’s sake, MotorTrend clocked the ‘21 Outlander PHEV at 8.5 seconds for 0-60. Personally, I think it feels faster than that, even if it isn’t.

The Outlander PHEV in SEL trim has an MSRP of $37,490. Keep in mind that there are still federal and state incentives to bring these prices down, in many cases, below $30,000. At this time of writing, despite the microchip shortage, Mitsubishi Motors North America is offering 0.0% financing for 48 months along with other incentives. I’ve even found a few versions for sale locally. Also remember, Mitsubishi offers one of the best warranties in the business: 5 years, 60,000 miles bumper to bumper, and 10 years, 100,000 on powertrain, main drive battery, and PHEV components.

We already know the Outlander PHEV will continue as-is as a 2022 model. But it begs the question: Will 2023 bring us an all-new Outlander PHEV? If I were to gaze into my hybrid Magic 8 Ball, all sources point to yes.