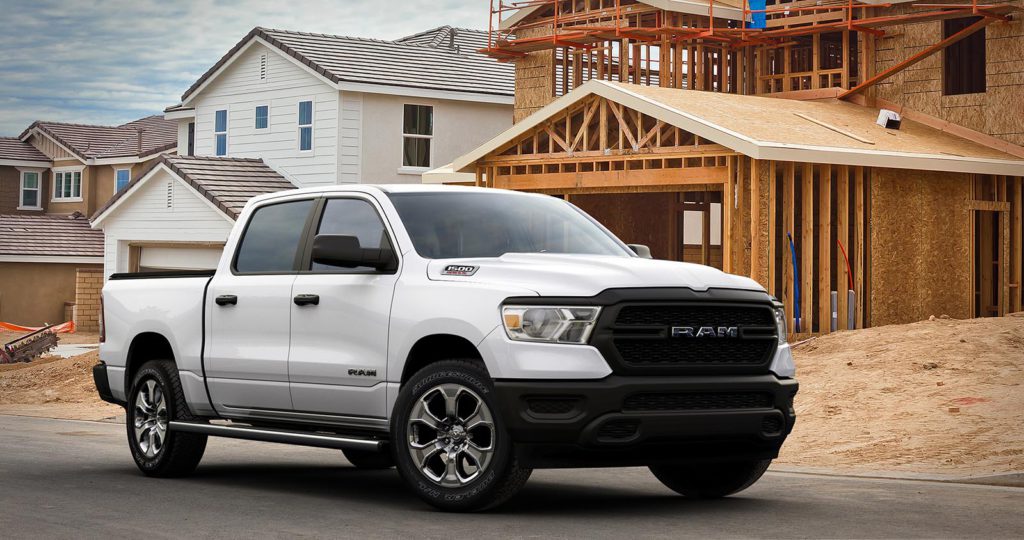 On the whole, automakers have delivered higher quality vehicles than ever during the 2021 model-year – but while traditional issues like faulty transmissions and ill-fitting panel gaps may be largely a thing of the past, the industry is struggling to resolve nagging problems with the high-tech gear today’s cars are loaded up with.

Balky voice control, hard-to-operate navigation systems, and faulty infotainment screens have become headaches for car buyers and nightmares for manufacturers, according to the latest JD Power Initial Quality Study (IQS). And with more and more of that gear showing up in today’s vehicles, this has slowed the pace as automakers struggle to improve overall vehicle quality.

“The industry-wide story is the incredible challenge consumers are having with infotainment systems and technology, in general,” said Dave Sargent, the head of JD Power’s automotive operations. “Consumers want this stuff but, but many are having trouble with it.

“It’s not that consumers don’t know how to use it,” Sargent stressed. “It’s just not working.” 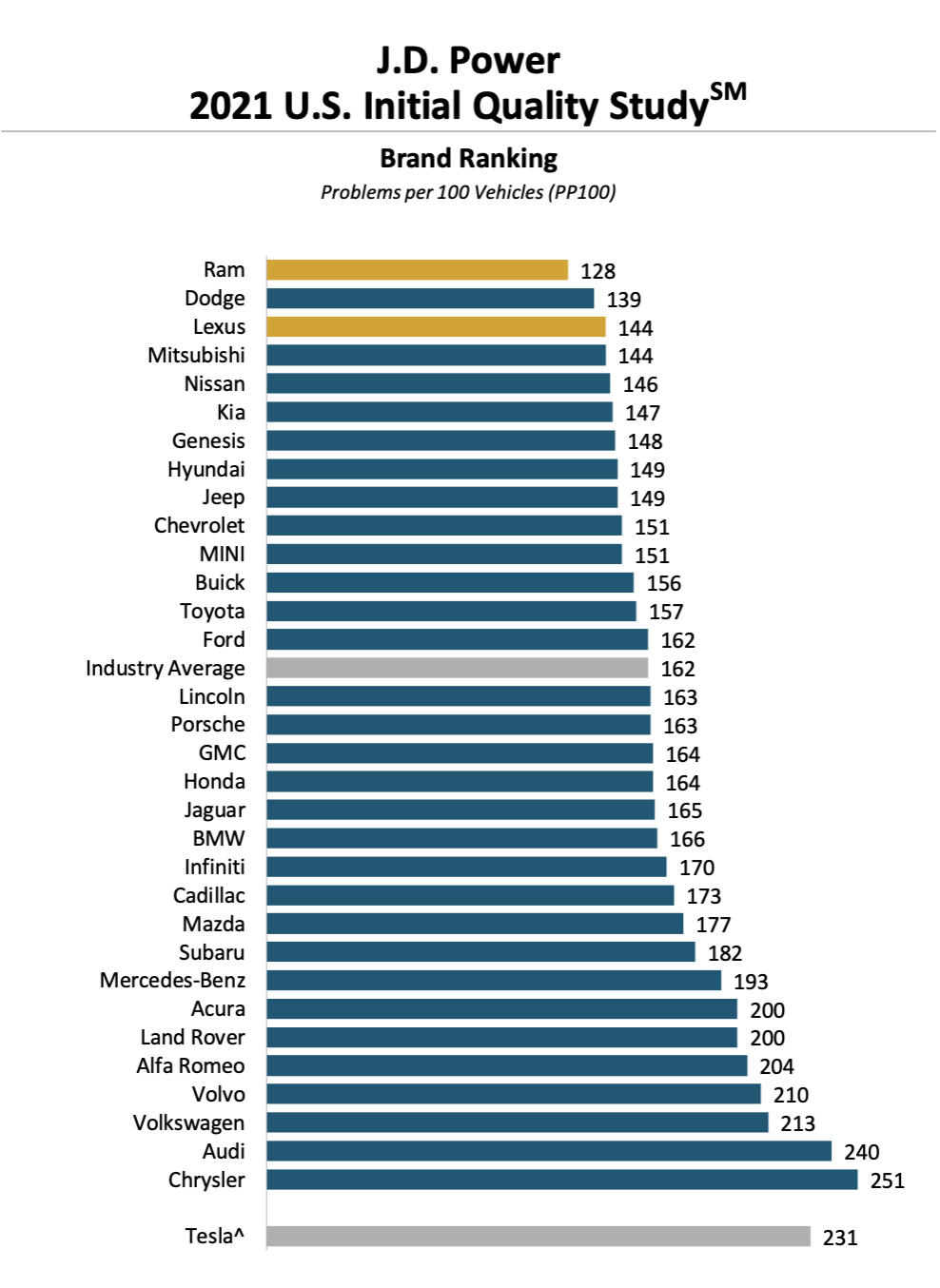 The Initial Quality Study measures the problems consumers have with vehicles during the first 90-days of ownership. The results of the 2021 IQS were based on surveys returned by over 110,000 owners and lease customers.

On the positive side, vehicle quality did increase about 2% overall. Much of that was due to continuing improvements in things like powertrain reliability, fit-and-finish, and wind noise. But the rate of increase has been slowing as consumers increasingly complain about vehicle technology.

“Automakers have gotten really good at building cars,” said Sargent. “We don’t hear squeaks and rattles, see panel misfits or hear of engines and transmissions failing to the degree we used to. But the automakers continue to load up their vehicles with electronic features and capabilities – which consumer want – and that brings with it an array of problems.” 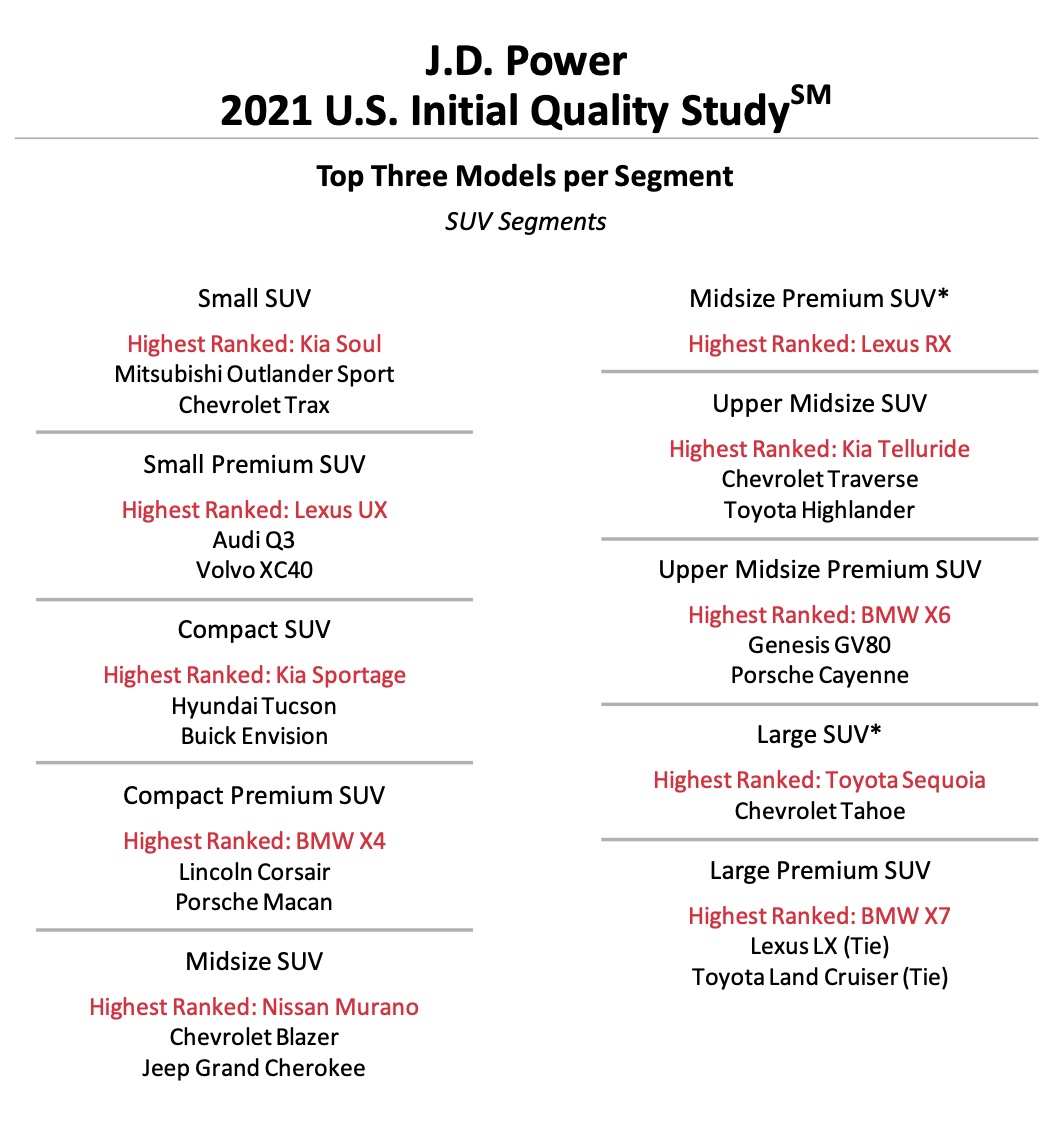 Infotainment systems were the single biggest source of problems, as reported by the owners surveyed for this year’s IQS. Add all the other electronic systems “scattered throughout the vehicle,” explained Sargent, and that generated “well over half” of this year’s reported quality problems.

That’s one of the reasons why premium brands – which typically have the highest level of electronic technology onboard – have slipped in the study in recent years. Among the 10 highest-scoring brands, only two are in the luxury market: Lexus managed to top that list, but still came in only third after long topping the IQS. Genesis, meanwhile, ranked seventh. 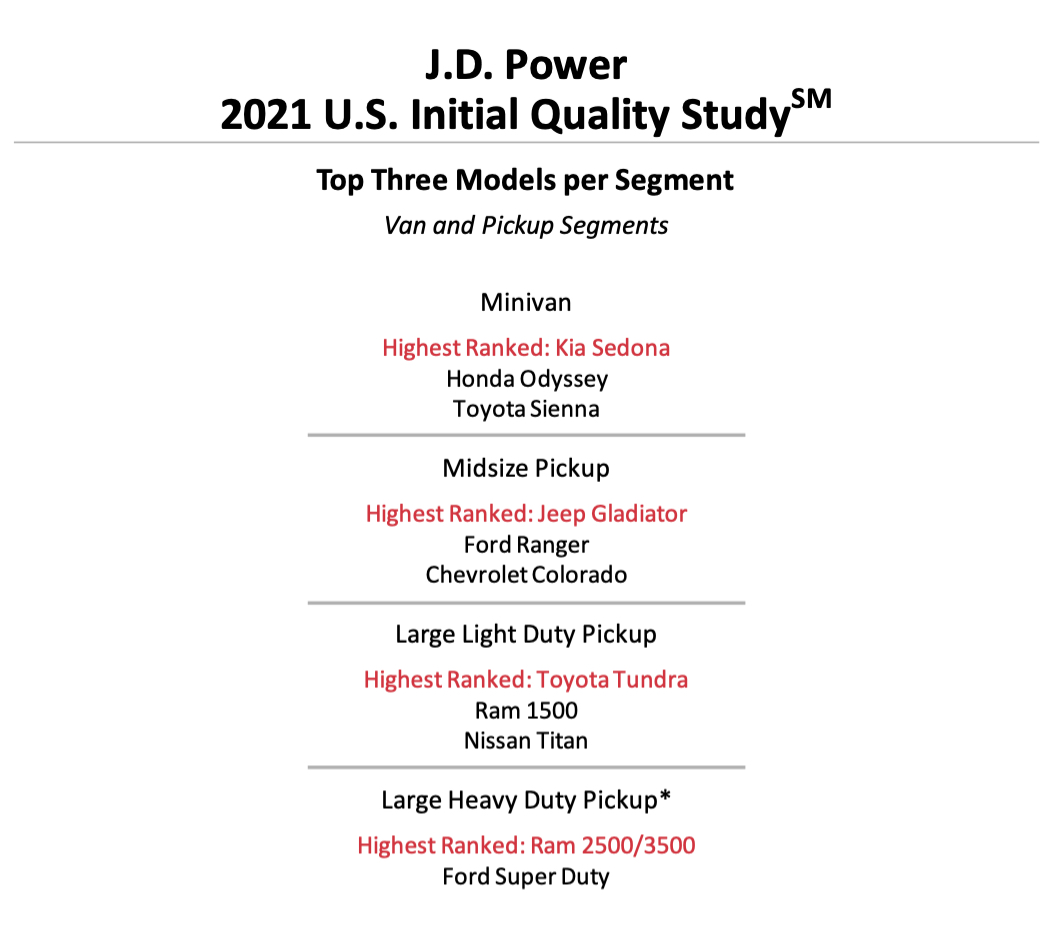 The Ram brand shot to the number one spot in the 2021 IQS, leapfrogging Dodge, which scored an upset win in 2020 – and which became the first-ever domestic brand to top Power’s IQS.

In contrast, Audi, Volvo, Alfa Romeo, Acura, and Mercedes-Benz were among the lowest-scoring brands covered by this year’s IQS.

“Premium manufacturers long had an advantage in basic build quality,” said Sargent. “That’s really not the case anymore. The fundamental build quality of a Kia or Chevrolet is every bit as good as a BMW or a Mercedes. So, the mass mkt brands have caught up there while the luxury brands have a higher mix of (technical) features that can go wrong.”

Domestic brands landed six of the 14 brands that scored above average in this year’s IQS. But Chrysler was the outlier, last among the 35 marques that Power included in the study with a score of 251 problems per 100 vehicles – 240 PP100, in Power speak. The Detroit brand actually did quite well with its big 300 sedan, but the Chrysler Pacifica was plagued with a broad array of problems, making it one of the year’s worst-scoring models.

Another surprise was the sharp tumble by Audi, which had a score of 240 PP100, said Sargent, adding that “They’ve been one of the leaders in tech and a lot of it has gone wrong for them.”

Tesla was only rolled into the IQS last year – and then with an asterisk, as the automaker won’t provide owner data to Power in 14 states where it is not publicly accessible. But the research firm was able to get enough surveys returned to get a clear picture on the brand. And it wasn’t very good.

Though Tesla did slightly better than it had in 2021, it was still the third-lowest brand, with a score of 231 PP100. What was surprising here was that Tesla’s electronics appear to be working reasonably well. It suffered from the sort of issues other automakers wouldn’t tolerate.

“Building cars is hard,” said Sargent, “and the main reason they lag the rest of the industry has little to do with being an EV company. A lot of the problems they have involve build quality, paint, fit-and-finish and rattles. A lot of other manufacturers would not tolerate…the build quality of a lot of Tesla products.” 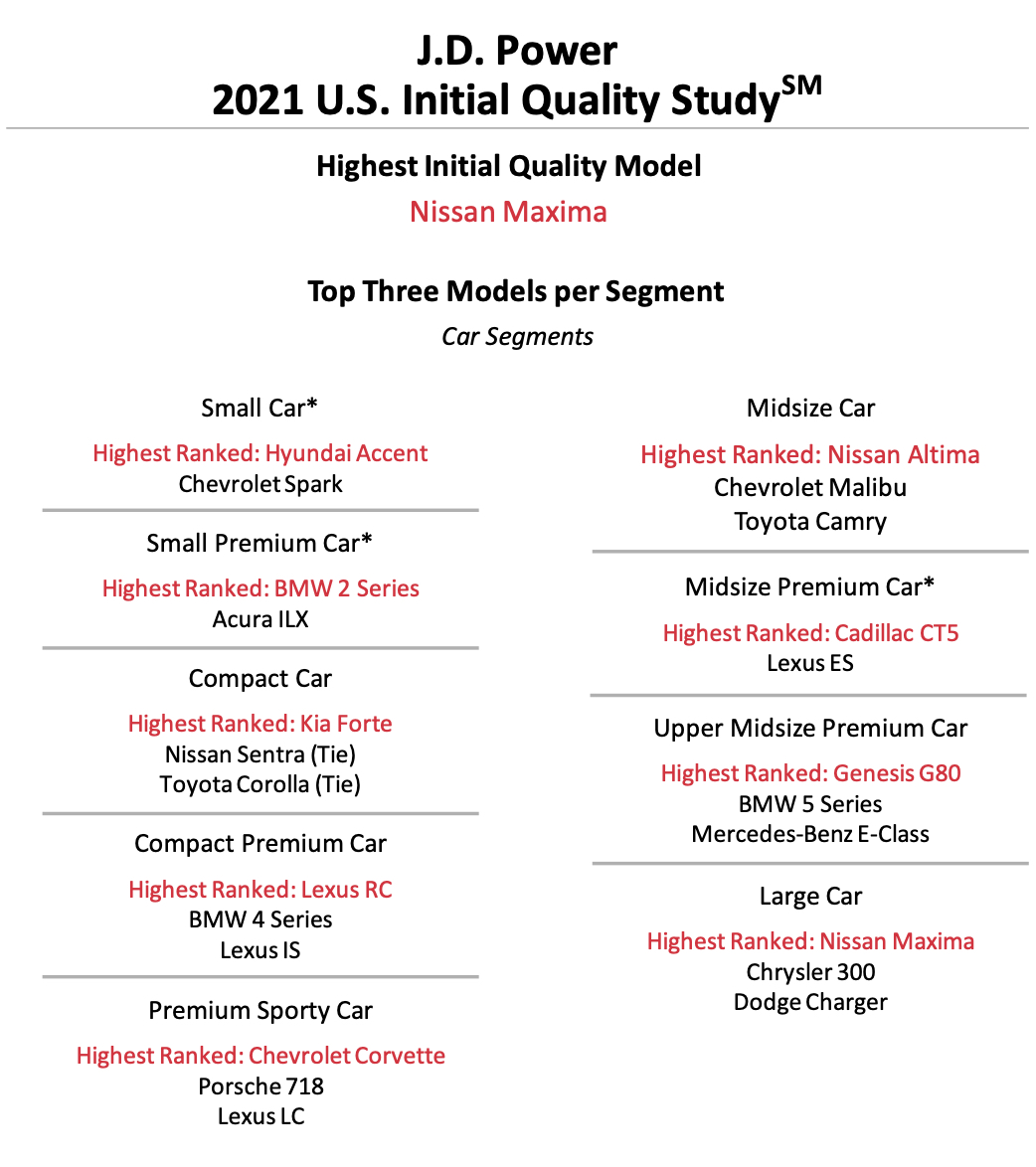 Despite Tesla’s poor performance, “Customers still tend to love them,” said Sargent, acknowledging that initial quality alone doesn’t always determine the brands that truly satisfy owners. Longer-term reliability is another factor, as is good design and solid performance. If brands like Audi can solve the problems they’re having with their technology, they’ll likely also be able to win back often frustrated buyers.


Best Of 2019 Maserati Lineup
20 of the Most Exciting New Cars of 2018
Lamborghini Huracan Charges Through 20k Sales, Is Top-Sellin...
Controversial YouTuber Shows Us How NOT To Recover A 4x4
An In-depth Look at Subaru's Racing Beast - The Subaru BRZ G...
Best of 2019 Honda