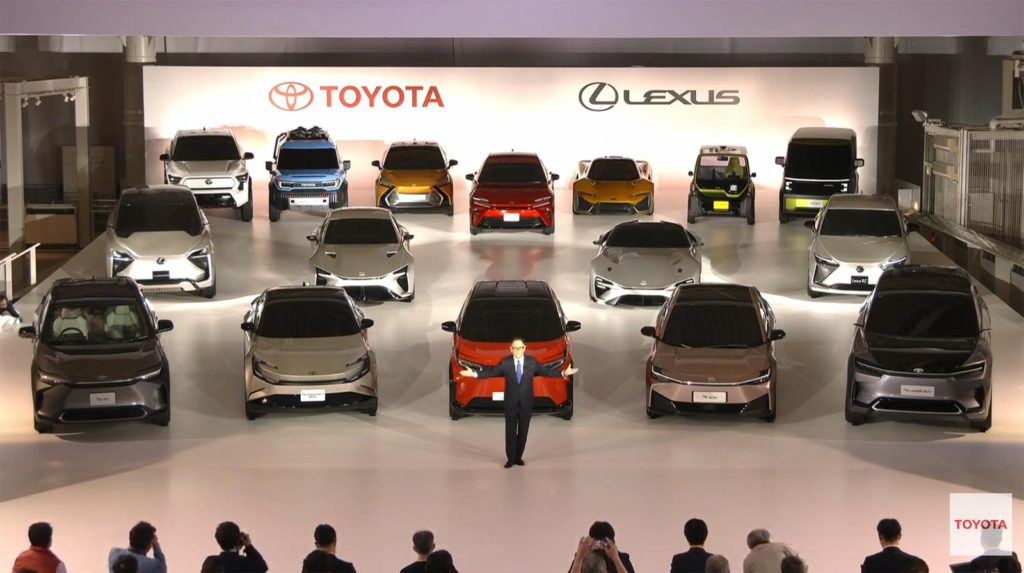 Chasing its key competitors in the race to electrify, Toyota announced Tuesday that it will bump spending on battery-electric vehicles to $35 billion by the end of the decade, by then launching 30 different BEVs on global markets.

All told, the Japanese giant expects to sell about 3.5 million all-electric vehicles annually – which would come in at just over a third of its current annual volume. That would lag behind key rivals like General Motors and Volkswagen, both of which are rapidly moving towards a point when they expect to sell only BEVs.

“It is difficult to make everyone happy with a one-size-fits-all strategy,” Toyota CEO Akio Toyoda said during a 90-minute presentation and question-and-answer session, noting that the carmaker continues to believe the best approach will be to offer a mix of BEVs and conventional, Prius-style hybrids, as well as plug-in hybrids and hydrogen fuel-cell vehicles.

The exception to Toyota’s mixed EV strategy will be the Lexus brand. The luxury division recently revealed teaser images of its first pure battery-car, the RZ. And it expects to go 100% BEV in North America, Europe, and China by 2030, said Toyota Chief Operating Officer Koji Sato. It will follow in other markets by 2035, he added.

A number of luxury brands, including Audi, Jaguar, Cadillac, and Bentley have already announced plans to go all-electric.

During the live presentation from Japan, Toyota officials revealed 16 BEV prototypes. These included not only the Lexus RZ but three other concepts for the luxury division, including a high-performance sports coupe. 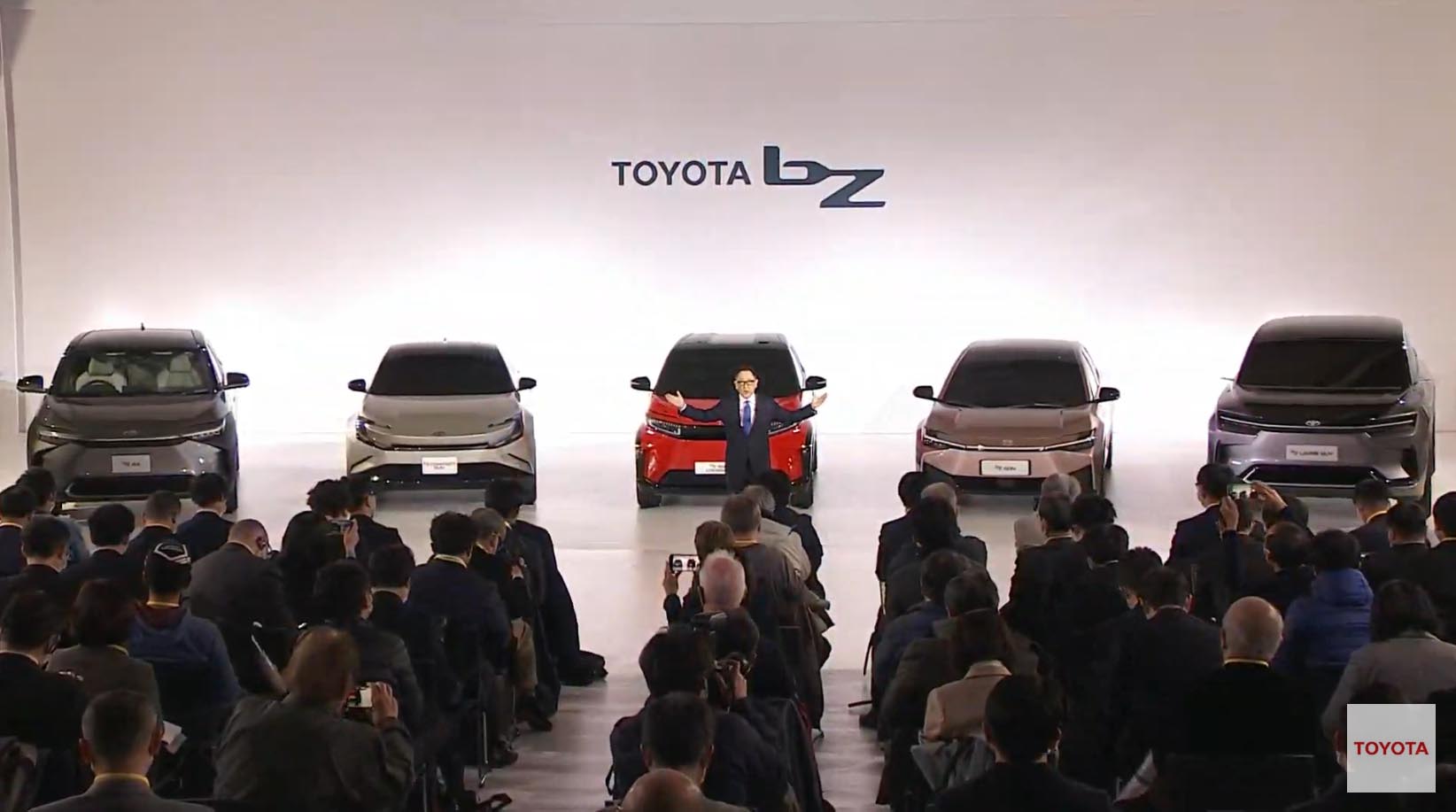 Another five prototypes will return in production form, badged bZ, the new, zero-emissions Toyota sub-brand. The first of these, the bZ4X SUV, was unveiled at the Los Angeles Auto Show last month. CEO Toyoda also showed off a sporty bZ sedan, a compact bZ crossover aimed at Europe and Japan, and a larger crossover targeting the U.S. market.

The majority of the 16 electric concepts are utility vehicles, including what appears to be a new take on the off-road-oriented FJ Cruiser. But the prototypes also included sporty sedans and coupes, as well as a battery-powered pickup that could go up against the likes of the Ford F-150 Lightning and Chevrolet Silverado EV, as well as the Tesla Cybertruck. 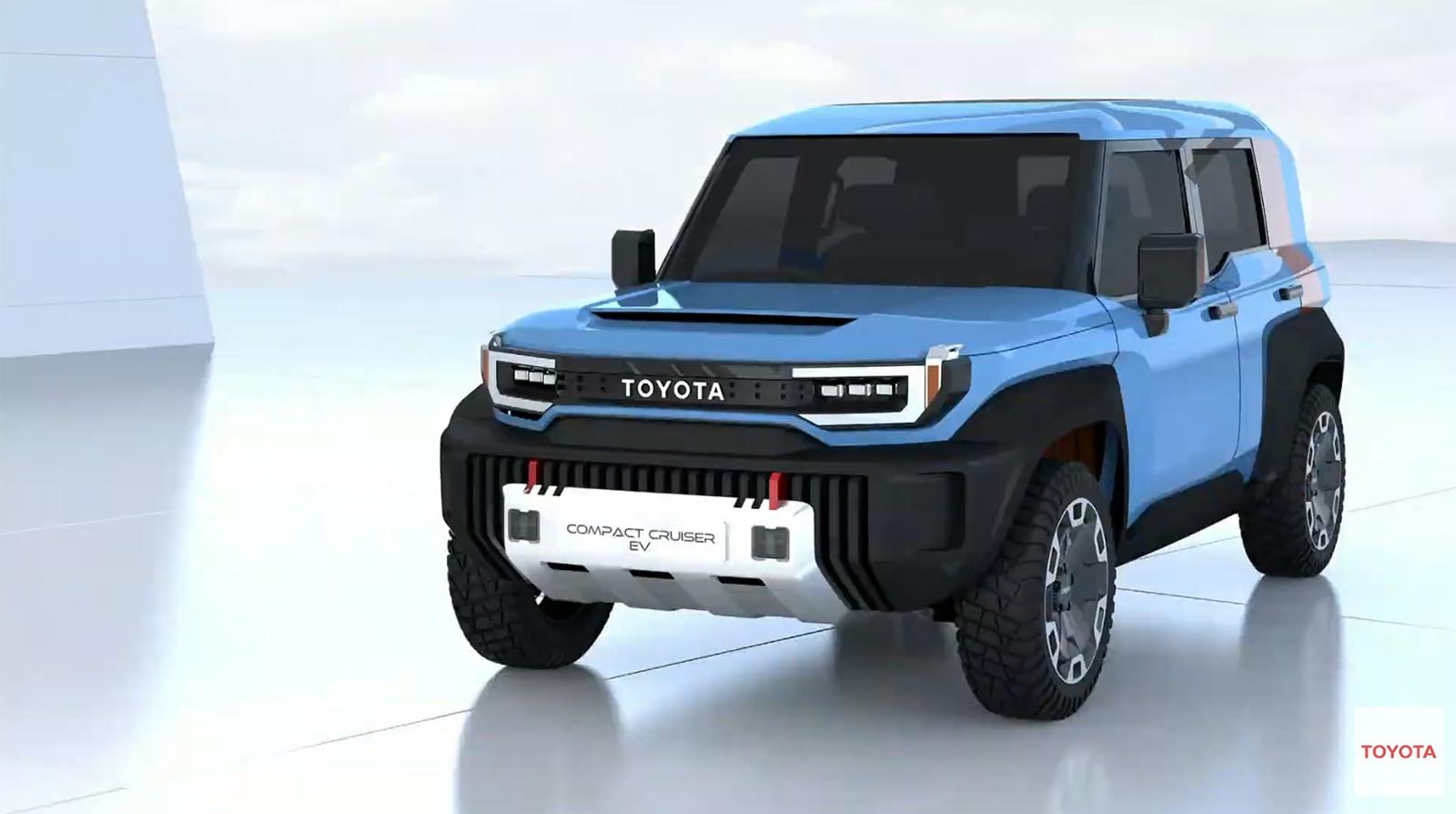 Where the Money Will Go

About half of the $35 billion Toyota plans to spend on EVs will go towards the development and production of batteries. Earlier this month, it announced plans to open a battery plant in North Carolina capable of providing enough cells for 1.2 million vehicles annually. That facility is expected to cost about $1.3 billion.

All told, Toyoda said the automaker will invest about $70 billion on electrification, but half of that will go towards hybrids and fuel-cell vehicles.

Toyota has been a strong proponent of hydrogen technology. It now offers the Mirai fuel-cell vehicles and is testing the technology for use in heavy-duty trucks at the Ports of Los Angeles and Long Beach. 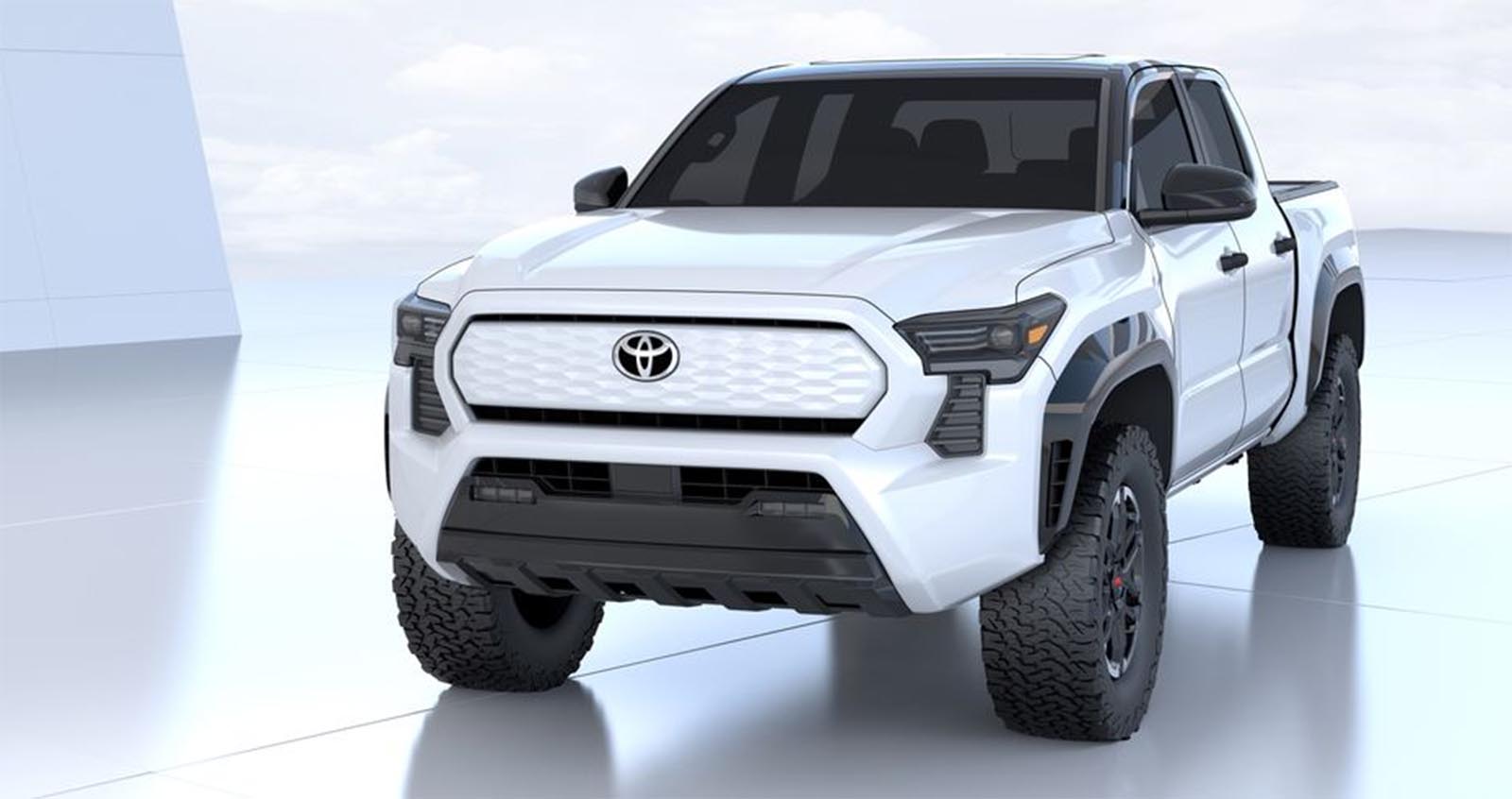 Part of the problem, according to the CEO, is the lack of a global vehicle charging infrastructure. The East and West Coasts of the U.S. are ready to go all-electric, he said, but it will be more difficult to win over consumers in the Midwest where charging stations are few and far between.

Toyoda, the grandson of Toyota’s founder, has been one of the industry’s most vocal skeptics when it comes to battery-electric vehicles. A year ago, he warned that a complete shift to all-electric technology would cost jobs and sharply impact industry profitability.

From Leader to Laggard?

His position has generated sharp pushback, Danny Magill, an analyst at London think tank InfluenceMap, lamenting that the carmaker “has gone from a leading position to an industry laggard.”

But Volkswagen now has committed over $100 billion to going all-electric this decade. And General Motors CEO Mary Barra has boosted that carmaker’s commitment from $20 billion to $37 just by mid-decade. Barra has repeatedly said that GM is “on a path to an all-electric future, with at least 30 of its own long-range BEVs due to market by 2025. It plans to abandon internal combustion engines entirely by 2035.

Toyota CEO Toyoda left open the possibility that the carmaker could shift its plans to offer even more BEVs, if needed. “In this diversified and unchartered era, it is important to flexibly change the types and quantities of products produced, while keeping an eye on the market trends,” he said during the presentation.