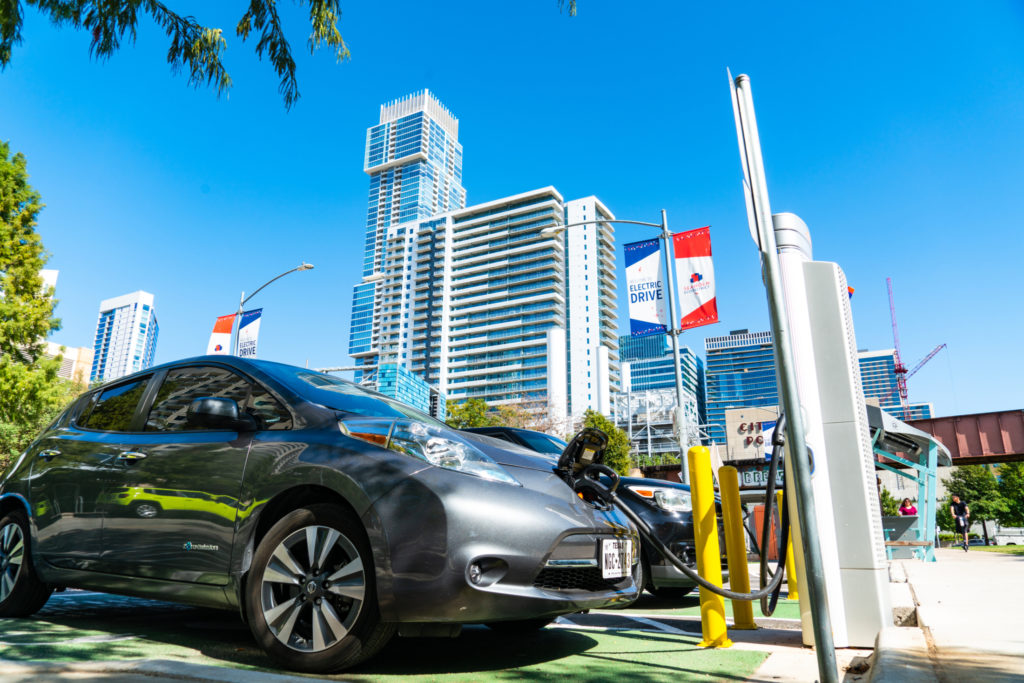 If President Joe Biden has his way, at least half of the new vehicles sold in the U.S. by 2030 will be plug-in hybrids, pure battery-electric vehicles or fuel-cell powered. The president laid out that target in an executive order he signed on Thursday, August 5, the same day his administration reversed the rollback of fuel economy standards enacted under his predecessor, Donald Trump.
The future “is electric and there’s no turning back,” Biden said as he stood on the White House lawn, surrounded by political allies, as well as senior executives from Detroit’s Big Three automakers. “The question is whether we’ll lead or turn back?” he added, warning that, at this moment, “China is leading the race.”

But signing an executive order is one thing. The other question is, what will it take to meet Biden’s goal? Right now, pure battery-electric vehicles (BEVs) account for only about 2.2% of new vehicle sales in the U.S., according to industry data. Include conventional hybrids and plug-in hybrids (PHEVs) and puts the total at around just 6% — though the trend is moving in the right direction, with sales of plug-based PHEVs and pure BEVs doubling during the first half of 2021.

Still, most forecasts had been projecting that plug-based products and hydrogen fuel-cell vehicles would nudge 30% by the end of the decade – if all the right things fell into place. According to even the most optimistic industry analysts, bringing that up to 50% will pose plenty of challenges.

Analysts point to a series of challenges that have to be overcome, starting with having more products for consumers to choose from. Until recently, only a handful of long-range battery-electric vehicles were on the market, most from Tesla. But the list is growing fast with new offerings from a broad range of manufacturers in an expanding list of market segments, notes analyst Stephanie Brinley of IHS Markit.

Among those options are the sporty Ford Mustang Mach-E, the compact Volkswagen ID.4 SUV and, later this year, both the Mercedes-Benz EQS luxury sedan and the GMC Hummer pickup. By mid-decade, in fact, there will be as many as ten different all-electric pickups. More and more plug-in hybrids are rolling into showrooms, as well.

In the process, range anxiety is becoming less of an issue. Newer BEVs can deliver in the ballpark of 300 miles per charge, with some topping 400. The Lucid Air sedan, due out around the start of 2022, will offer a long-range option that breaks the 500-mile barrier.

Meanwhile, prices are starting to come down, even as range capabilities rise. Nissan will offer a base version of its Leaf model that, after applying a $7,500 federal tax credit, will become the first BEV to come in at under $20,000 — $19,990, in fact. That’s a relatively limited, 149-mile range version of the Leaf. But as time and competitiveness grow, more BEVs are expected to dip below the $30,000 mark, including a version of the ID.4 that VW plans to start building at its Chattanooga assembly plant next year.

Improved batteries are the key to the future, experts agree. Manufacturers are investing billions in developing improved lithium-ion technology and the next-generation solid-state batteries that Mercedes said it expects to put into production by around 2026.

Whatever technology researchers come up with, they expect the result to yield a longer range, better performance, and lower overall costs than what we have today. The batteries in the Chevrolet Bolt EV cost about $150 per kilowatt-hour or nearly $10,000 for a pack. GM’s new Ultium cells are targeted at about $100 per kWh, and President Mark Reuss has said the long-range target is $70 or less.

Faster charging is also a key target. Even with high-speed public chargers, it can take an hour or more for most of today’s BEVs to reach an 80% “state-of-charge.” A few, like the Porsche Taycan, can get there in under 30 minutes. But GM, Mercedes and others hope to cut that to as few as 10 minutes by the time the Biden mandate goes into effect. That would let a motorist “fill up” a battery pack about as quickly as they could a gas tank.

Where to plug in, however, is one of the biggest challenges EV proponents face. Long-term, about 80% of owners are expected to plug in at home, using Level 2 240-volt chargers, forecasts Pat Romano, CEO of Chargepoint, one of the largest public charging companies. But there will be millions of motorists without garages or driveways where they can install chargers. And motorists will need places to plug in while traveling.

And that’s where the Biden Administration hopes to energize things. In keeping with his executive order, the President has proposed funding for a network of 500,000 charger ports across the United States. That, he contends, will make chargers as ubiquitous as gas pumps are today. Government support could help make hydrogen filling stations more commonplace, as well. Today, there are barely 100 in the entire U.S., nearly all of which are in California.

But Biden wants the federal government to kick-start the EV transformation in other ways. During his Thursday appearance, the President loosely outlined plans to offer tax credits, loans and grants to help researchers develop better batteries and for automakers and suppliers to bring better EV drivetrains and vehicles to market.

The money would clearly help. A recent study by AlixPartners forecast that the industry will invest at least $330 billion in EV development by 2030. And that’s growing fast. GM alone increased its budget from $20 billion in March 2020 to $35 billion today – and that’s just through mid-decade.

The administration is also expected to take steps to improve the nation’s electric grid – another major challenge to electric vehicles, as recent blackouts and brownouts in California, Texas and other parts of the country have underscored.

Consumers aren’t being left out of the picture. Biden and his team also plan to expand and increase tax credit eligibility for EV buyers. With current tax credits maxed out at $7,500 per EV, a proposal in the House of Representatives would raise the limit to $10,000 for EVs built in the U.S. and $12,500 for those assembled using union labor. It’s far from certain that the proposal will pass in its current form. However, experts generally expect that Congress will restore the current level of tax credits for manufacturers that crossed the 200,000-unit sales threshold (e.g., GM, Tesla) and are no longer authorized to hand out incentives to buyers.

Only a few years ago, most manufacturers remained skeptical about the EV market. Confidence has been growing, and the industry responded favorably to Biden’s 2030 mandate. In a joint statement, the “Detroit Big Three” — GM, Ford and Stellantis — said they share the President’s aspirations. “You can count on Toyota to do its part,” the automaker said in a statement.

Overall, it seemed that any reservations over Biden’s executive order largely came from critics who felt the White House wasn’t going far enough. By comparison, those critics point to Canada and the European Union, both of which have laid out plans to ban sales of new gas and diesel models entirely by 2035 – as have the states of Washington and California.
Describing the plan as “loophole-ridden,” Dan Becker, director of the Safe Climate Transport Campaign of the Center for Biological Diversity, declared that “[today’s] proposal relies on unenforceable voluntary commitments from unreliable car makers.”

Perhaps, but while it certainly remains to be seen whether the industry will follow through, there are plenty of reasons to believe the future is, as Biden suggested, “electric.”