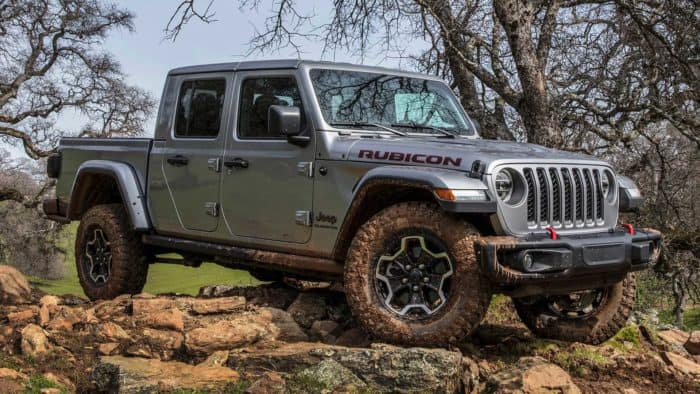 Despite having a spot on the table as one of America’s best-selling car brands, and actually being the Fiat Chrysler’s top-rated brand, Jeep takes the top spot as the last machine representing America’s affluent history of the automakers’ independence. Before Chrysler acquired it in 1987, Jeep was finding it hard to catch up with the Big Three leading to it to offering pickup trucks. And exceptional trucks at that to say the least.

Throughout 60% of its existence, from 1947 to 1992, Jeep specialized in providing truck offerings. And even though they didn’t make headlines like the Chevrolet Silverado or Ford’s F-150, most of these machines earned the right to be recognized and remain remembered in the auto history.

Given that the all-new Wrangler-based Jeep Gladiator pickup has finally made its way back into Jeep’s lineup, going way back to Jeep’s humble beginnings gives us a reminder as to what the new truck will have to live up to. 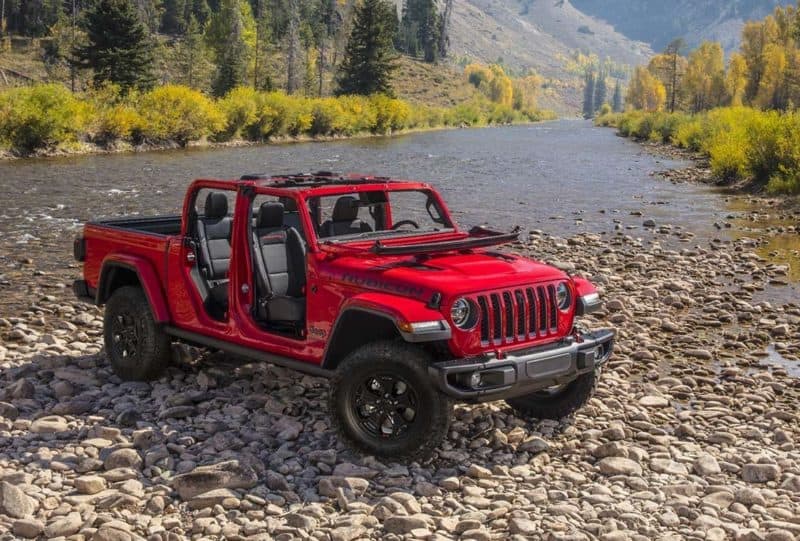 The all-new Jeep Gladiator is the first Jeep pickup truck since XJ Cherokee-based Jeep Comanche which bowed down a long time ago in 1992 and has since been all but forgotten by most. The latest addition to the Jeep portfolio starts from around $34,500, and is already wreaking havoc in the midsize pickup segment.

Jeep badge itself is there to testify about Gladiator’s serious off-road performance, but one look at its spec sheet will do the same. The Wrangler-based truck boasts solid Dana front and rear axles accompanied by a low-range transfer case which is a match made in heaven if you’re looking to inflict some punishment on your vehicle. Furthermore, the range-topping Rubicon models have the ability to electronically lock the axles and disconnect the front sway-bar which comes in handy in some of the harshest environments terrain-wise.

By having a five-link rear suspension and a full 18.9 inches longer wheelbase than the Wrangler, the Gladiator boasts much more stable and composed ride than its SUV role model. Furthermore, It’s extremely good at towing considering it’s capable of pulling no less than 7,650 pounds with the optional $250 Trailer Towing Package, while its maximum payload capability of 1,600 pounds isn’t that bad either. 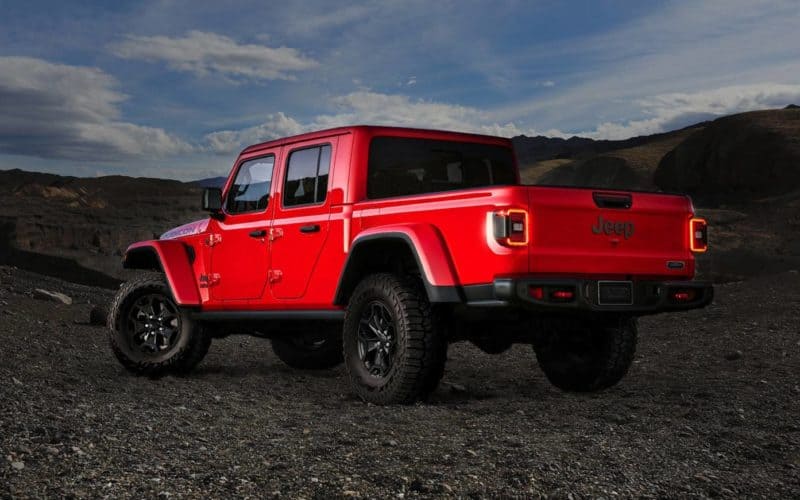 The Gladiator is exclusively available with a 5-foot bed which somewhat limits its overall utility potential, however. Moreover, the short-box is rather shallow giving a volume of just 35.5 cubic feet – much lower than the class average. Every version of the truck sports a 4-door cab configuration so you at least won’t have any issues with interior room volume.

At the moment, the Wrangler-based pickup truck can only be ordered with a reliable 3.6L V6 engine taken straight from the SUV. It’s rated at 285 horsepower and 260 pound-feet of torque, and can either be backed up by a 6-speed manual or an optional 8-speed automatic. An optional 3.0L turbo-diesel V6 with 260 horsepower and 442 lb-ft of torque is on its way but won’t be available until 2020. When it does arrive, however, the diesel engine should help the Gladiator push its official towing rates even higher up, as well as improving its fuel economy which, at the moment, reads 17 mpg in the city and 22 mpg on the highway. Don’t forget that every single Gladiator comes with a mandatory all-wheel drive.

Inside, the first Jeep pickup in almost 30 years boasts a contemporary array of goodies with the UConnect 4 infotainment system at its center (base models make do with an older version and a 5-inch screen). With it come the standard Apple CarPlay and Android Auto, eight speakers and seven USB ports (including three Type C units). 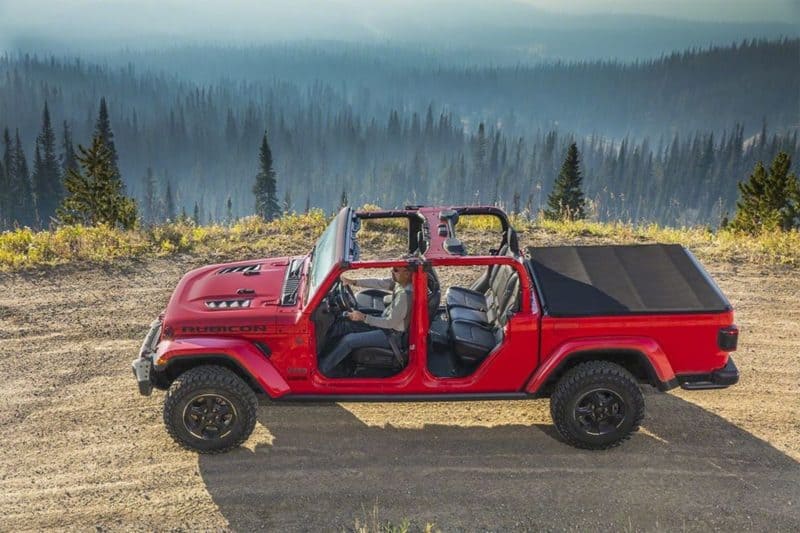 To fully load your Gladiator with safety gear, you’ll need to purchase the $995 Active Safety Group (blind-spot monitors, front and rear parking sensors), upgrade your infotainment system to 8.4 inches with a $1,595 purchase, and finally order the advanced package itself for $795. This will add adaptive cruise control, rear cross-traffic alert, full-speed forward collision warning, and the automatic emergency braking system.

With the curtain now dropped off Jeep’s new hauler, let’s have a look at the 10 Jeeps that made it possible.

The Old Jeep Trucks That Inspired the New Gladiator

After World War II had come to an end, Willys-Overland came up with the exceptional Jeep model and didn’t waste any time capitalizing on it. And since Jeep brought a unique feel to the market, the newly created Jeep brand offered some of the strangest models of the post-World War II era.

First on the list were the “Civilian Jeeps” – the CJ-2A, the CJ-3A work Jeep, the luxurious Jeepster convertible, the steel-hooded Station Wagon, and finally the all-wheeler truck (back then the brand didn’t have a good knack when it came to names). Despite the big leap the automotive industry took in the years following the war, the Jeep Truck was created and stayed unchanged from 1947 to 1965 – a course the company would take more times than once in the following years. 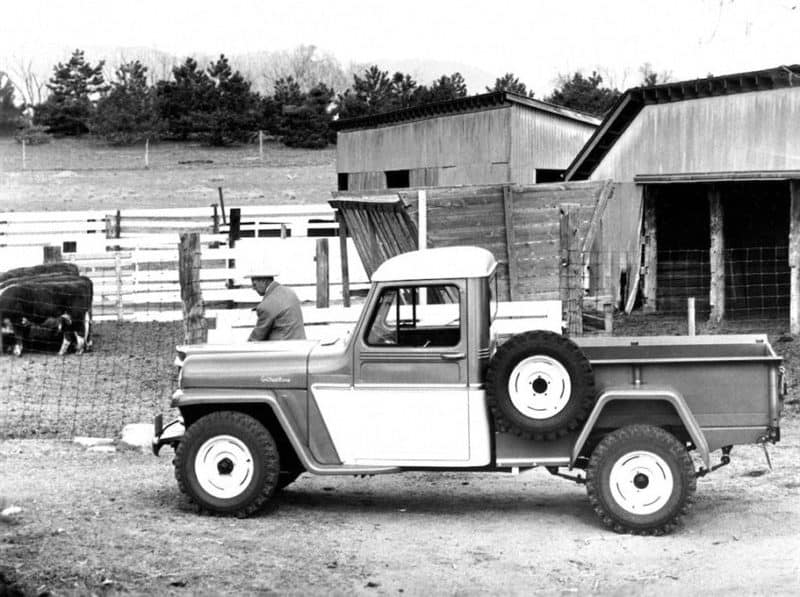 By 1952, Willys-Overland was drawing its last breath and had to leave the reigns to Kaiser Motors which left them eager to make all sorts of renderings on Jeep’s dying product line. The end result was the ’57 Forward-Control lineup. With inspiration from the existing CJ-5 platform, the FC trucks were designed by Brooks Stevens – the same individual responsible for penning Jeep’s first post-war cars.

In 1966, the FC trucks got phased out and have since then attracted a massive following from the Jeep lovers. The Almighty FC model was then brought forward by Jeep in 2013 during Jeep’s Easter Safari held in Moab, Utah. However, renewed production is just a dream for this iconic model. 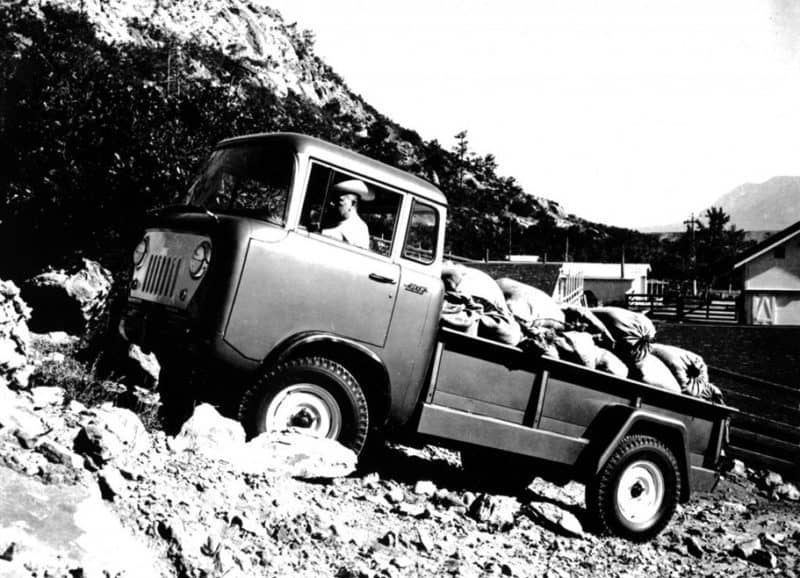 1962 saw the introduction of Jeep’s exotic J-Series which was to take the position of the old Jeep truck. It did this very well staying on the market much longer compared to its predecessor, and seeing the brand change hands more times than it had generations in the process.

Having the same front clip and frame like that of the iconic Wagoneer, “Gladiator, J-10, Honcho, J-2000, J-200, and J-10” were among the names used to refer to this model before Chrysler came in to acquire the parent company AMC, ending its production in 1988.

While this did not affect the Wagoneer until 1991, Chrysler wasn’t too keen on letting the ancient Jeep have a day on the battlefield with the full-size truck offerings from Dodge. This saw Chrysler discontinue the production, making it one of the first vehicles it did away with from AMC’s era. Later on in 2012, it showed a little bit of compassion by debuting the accustomed J-12 design at Moab. 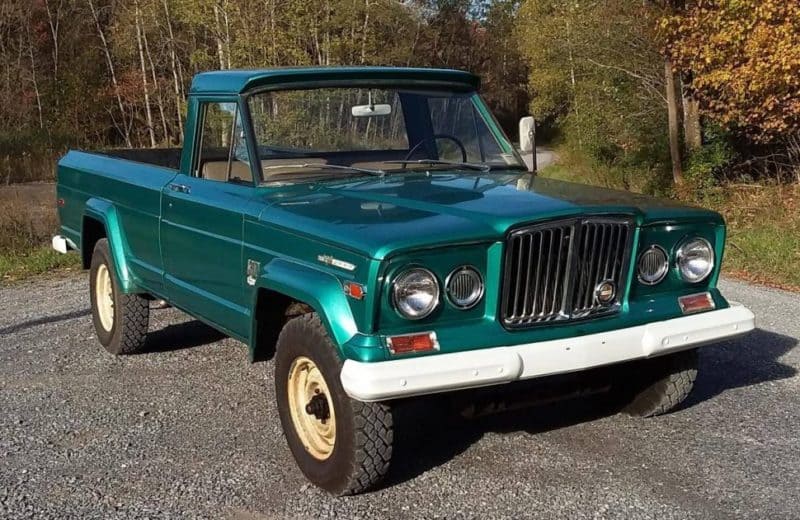 Even the semi-Jeep enthusiasts have heard about the Jeep’s iconic CJ-7 and CJ-5 models. However, this number will drastically go down if you’re talking about the in-between CJ-6. With a limited production number of about 50,000 produced between 1955 and 1981, the CJ-6 was more of a CJ-5 with the difference being the wheelbase extension of about 20 inches.

Obviously, this resulted in several pickup renderings like the design cited here. The CJ-6 was a force to reckon with in countries like Sweden, Brazil, and South Africa, where unexpectedly, local Volkswagen subsidiary did the assembling of the Jeeps. 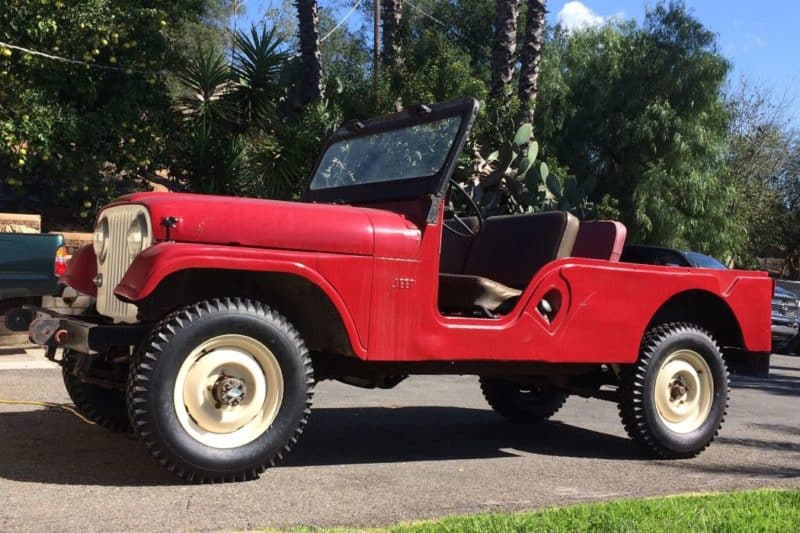 Having been produced from 1967 to 1969, the primary intent for the launch of the M715 was to replace the aging Dodge M37 during a time where the Vietnam War was at its peak. And while it drew inspiration from the Gladiator, the Jeep M715 is, without a doubt, the ideal pickup for the hardcore Jeep enthusiasts.

With its mechanical simplicity, four wheel drive, convertible top and function-over-form design, the M715 has been a favorite for the off-roaders over the decades. 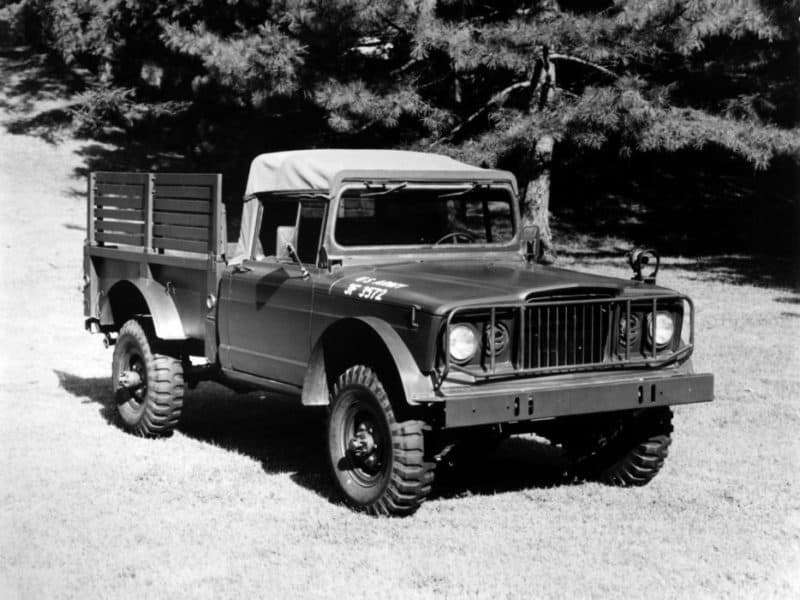 CJ-8, also referred to as Scrambler, will be the first thought that comes to mind for casual Jeep fanatics who are thinking about a “Jeep Truck”. At least they were up until the new Gladiator arrived. The CJ-8 production run was the first time in the history of the company where the lines became a little bit blurry in regards to the company’s pickup truck and the iconic off-roader, and this was just for a short time.

Despite the Scrambler getting some pluses as being Ronald Reagan’s choice for off-duty ride excavations, it only did 30,000 in sales from 1981 to 1986. However, due to its utility and rarity in the modern day, it’s now one of the most liked Jeeps. You’ll also remember that, before the name “Gladiator” was chosen for the newest Jeep truck, the name “Scrambler” was being circulated at equal amount. 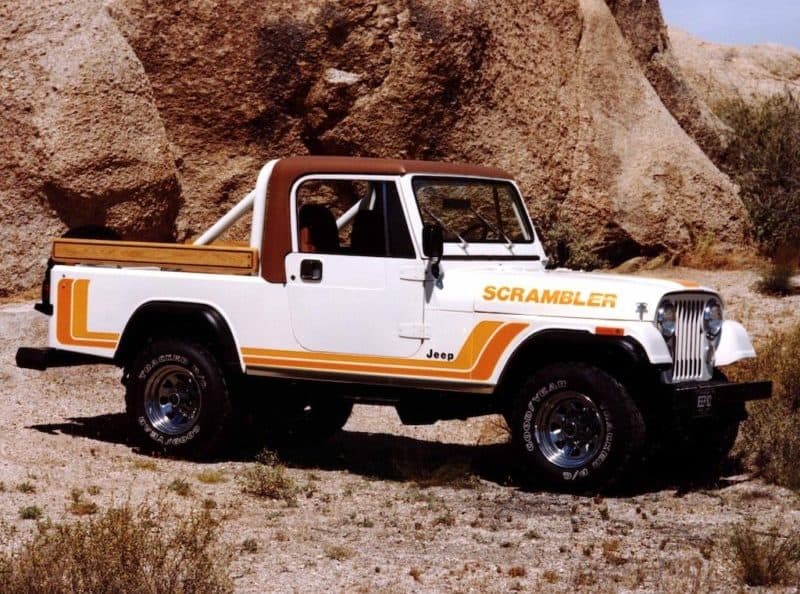 Having been inspired by the XJ Cherokee SUV, 1985 saw the reveal of the Comanche as a competitive and modern compact pickup built to give the Ford Ranger and Chevy S-10 a run for their money. Unfortunately, this was just an imagination.

As soon as the Comanche started making rounds on dealer lots, the big guns proved to be too expensive for the AMC to compete with, and after Chrysler had acquired it, it featured a similar look to that of its newly debuted Dodge Dakota pickup.

While the new management was determined to transform Jeep into an SUV-only company, the sales of the Comanche diminished. In 1992, the production run was discontinued and trucks became a thing of the past for the Jeep brand. 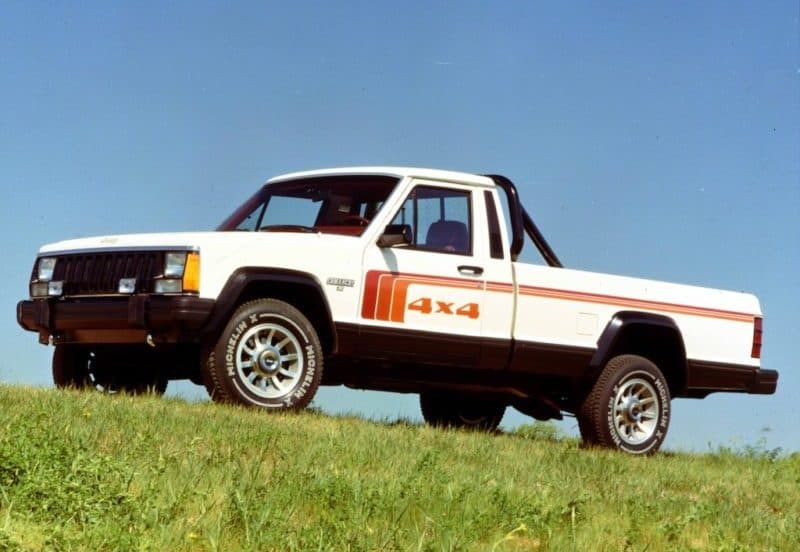 After its dramatic launch in 1986, the Jeep Wrangler saw to it that the CJ-model production would come to an end. This would also become the most top-rated model launch in 47 years of the Jeep brand.

While it still maintained the old model’s body-on-frame look and featured the four-wheel drive setting, the YJ Wrangler had more mechanical similarities with the XJ Cherokee rather than the spartan all-wheel drive SUV that had its roots go way back into the World War II era.

Today, Jeep’s sales of the Wrangler are based on its World War II connection. If you’re looking for the real ancestor of the modern Wrangler, this is undoubtedly the one. 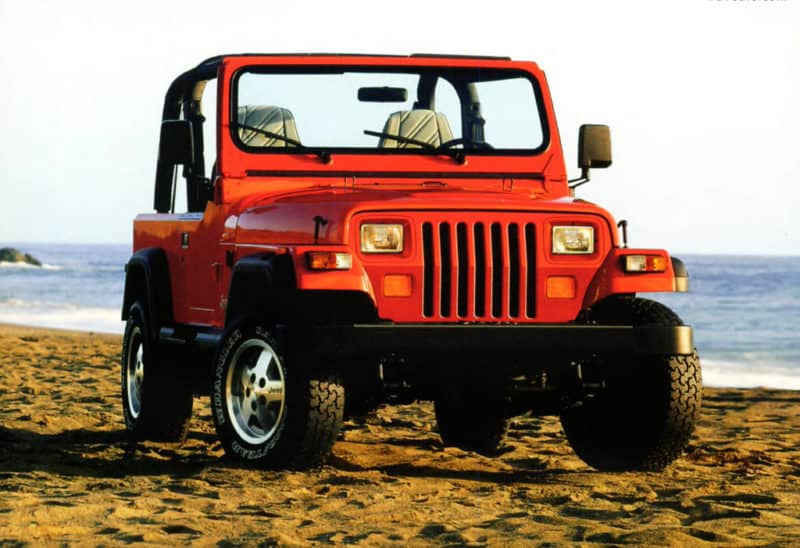 Similar to a modern revival of the CJ-6, Jeep did a 2004 Wrangler Unlimited launch as an extended wheelbase design of the Jeep Wrangler. With a 10-inch extension, the Unlimited version offered a lot of options that were not available on other Wrangler models, including the soft top which rendered it into a pickup. However, they remained two-door models until the JK generation made its debut.

Regarding the Rubicon trim for off-road ventures, the Unlimited model offered upgraded axles as well as suspension components, and had in it a towing capacity almost twice than that of the Wrangler it was based upon. Due to their rarity, short production, and versatility, they’re one of the most sought after Jeep models today. 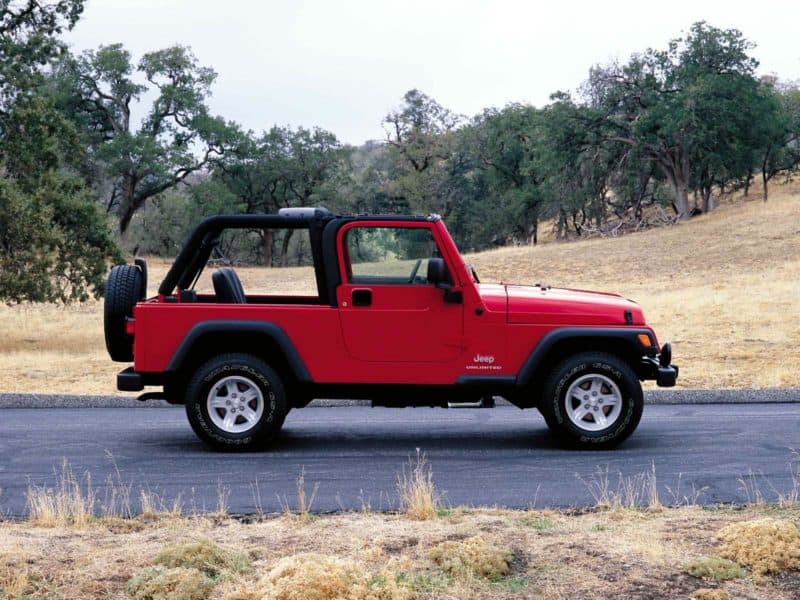 2007 saw Jeep launch the JK Wrangler which came along with the new Unlimited. With the two-door long-wheelbase feature scrubbed, the Unlimited was now a four-door convertible – the first to be produced in decades by any automaker.

The four-door Wrangler might have been viewed as car blasphemy by a handful of purists at first. However, the Wrangler Unlimited has beaten all the odds to become a successful sales figure for Jeep. 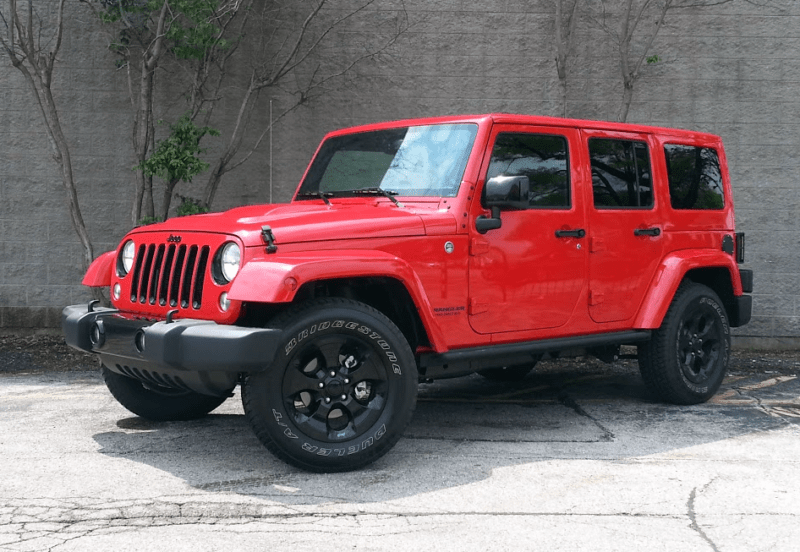 Jeep’s pickup truck history is in some ways fascinating compared to that of the Big Three. Sources close to the FCA have reiterated that Jeep has long been weary of the Jeep Truck idea because of the slight risk that it might temper with their successful sales. Be that the case, Jeep’s status as the best-selling brand of the company has now rendered all that irrelevant. The all-new Jeep Gladiator is finally here – may it reign supreme for years!