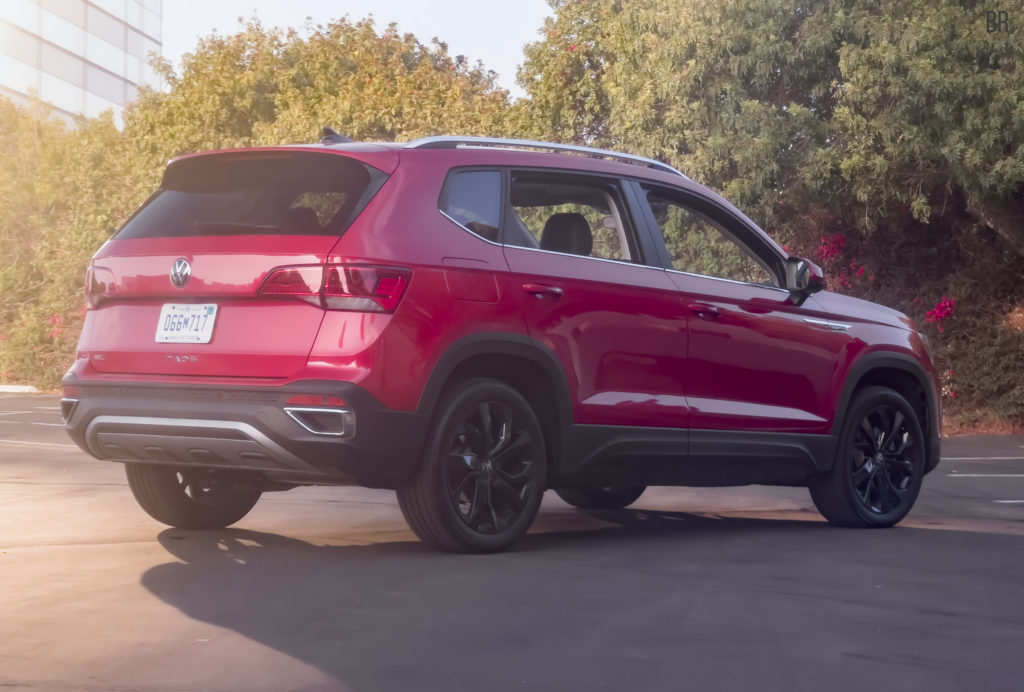 In May of 2021, VW announced the 2022 Volkswagen Taos, a slightly smaller SUV to join the family under the Tiguan. The Taos was made to compete with the likes of the Jeep Compass and Subaru Crosstrek. But does the Taos earn a place in VW’s lineup?

On paper, the Taos may seem weak especially since it’s equipped with a mere 1.5L engine to power an SUV that isn’t all that small. Thankfully, that wasn’t the case with real-world driving. I spent one week with the 2022 Volkswagen Taos SEL and was pleasantly surprised. The top-of-the-line model includes Beats Audio and VW’s I.Q Drive features including Lane Keeping and Radar Cruise Control. Here’s everything you need to know about the 2022 Volkswagen Taos.

Pretty Big for a Little Sibling 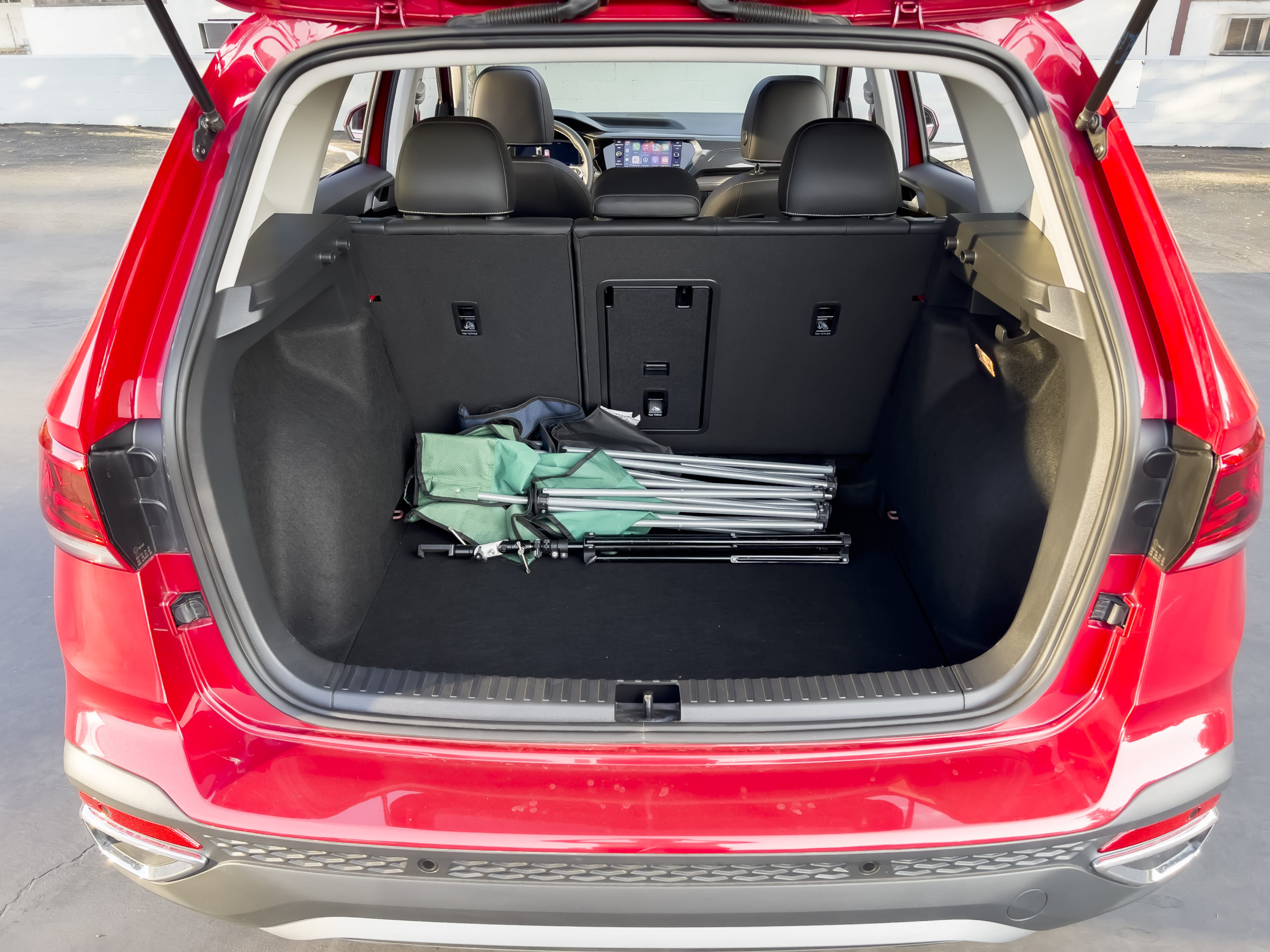 The 2022 Volkswagen Taos is built on a variant of the same Volkswagen MQB platform that the Tiguan and Atlas are based on. It felt very open thanks to the panoramic sunroof ($1,200 option) and the physical dimensions.

Trunk space was abundant with 27.9 cubic feet. That’s enough to fit 17 carry-ons with the rear seats up! Fold the seats down, and you’re met with 65.9 cubic feet. Yup. That’s space for 40 carry-ons if you stuff them right. 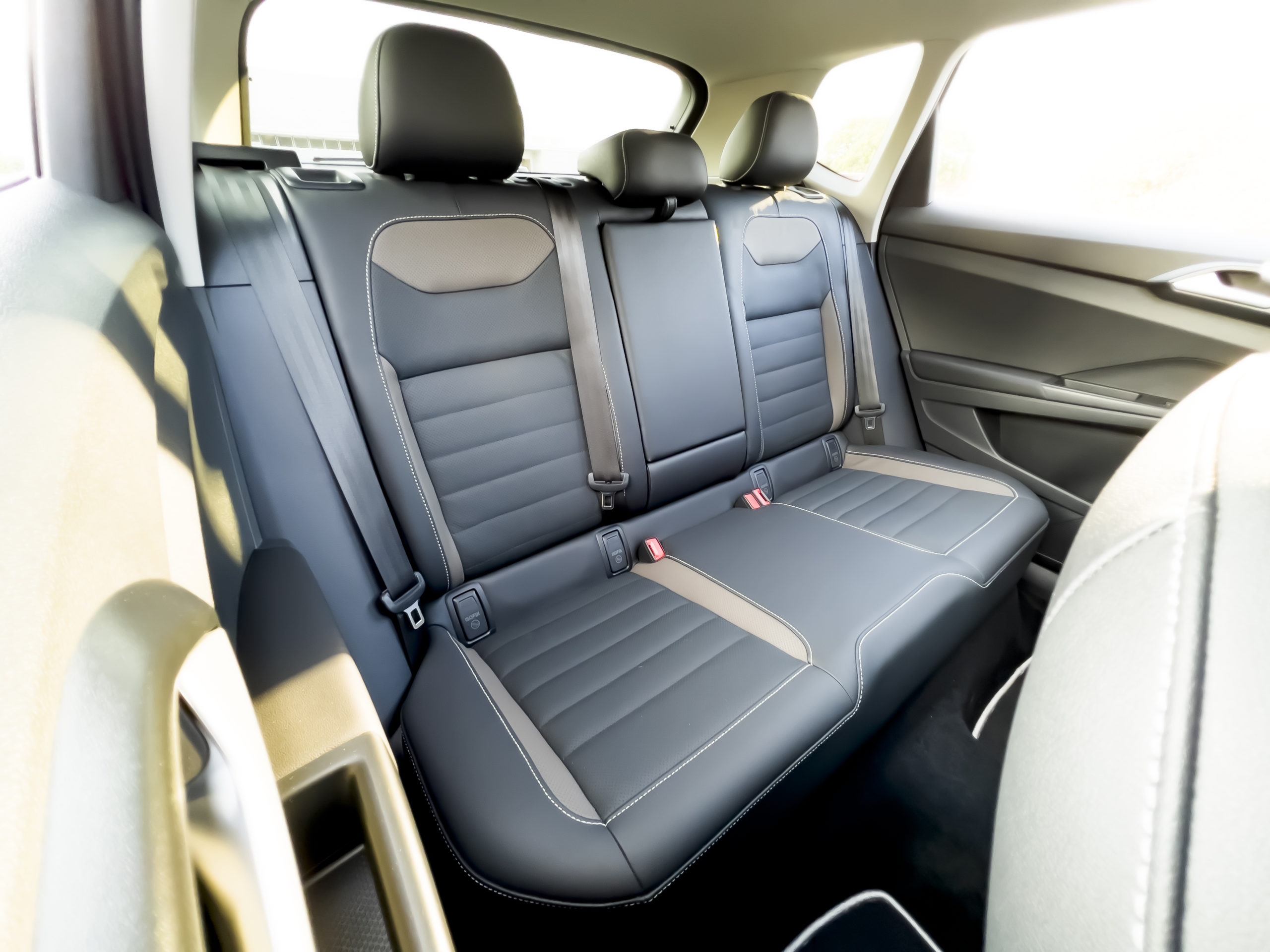 All of this room translates to a comfortable ride in the rear seats with plenty of legroom and headroom for adult passengers. You’ll have no trouble fitting four adults in this SUV for a road trip.

Rear passengers’ only complaint (if they have any) would likely be the airflow as the back row of the Taos only has two small, central air vents and none in the side pillars. And your passengers will likely not get car sick as visibility from the rear seats is good, and the SUV doesn’t have much power to carve mountain roads at nauseating speed. 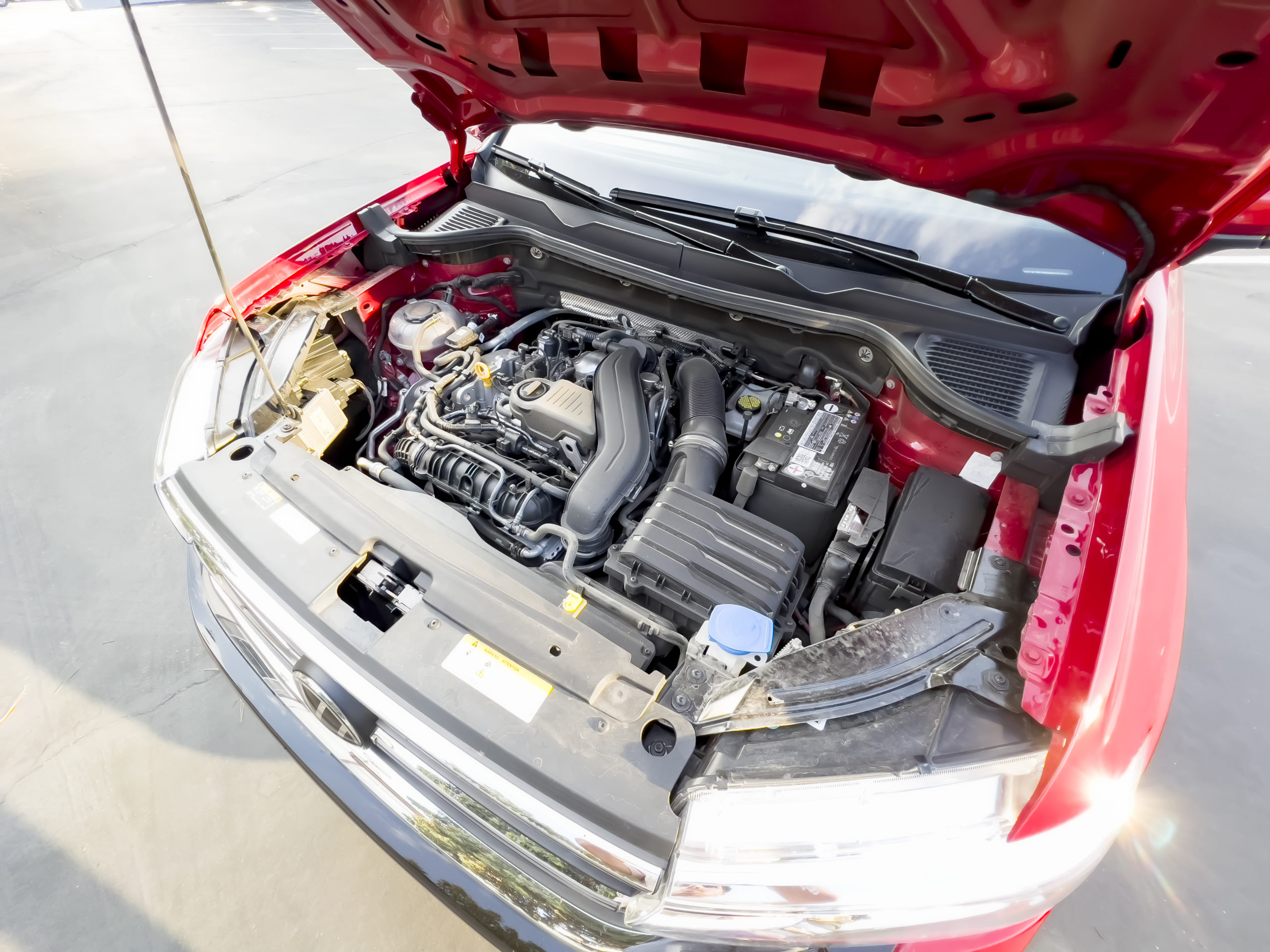 The turbocharged 1.5L engine is quite zippy, actually. I did not notice any turbo lag, and the shifts were extremely smooth. Since the engine is so small, I could barely feel when it turned on and off whenever eco start/stop was enabled. I never felt that the power was lacking, and the shifts were very seamless with the 8-speed automatic.

Over 200+ miles of driving, I averaged 28.5 mpg including some more spirited onramp testing. Cruising on the freeway between Los Angeles and Irvine, California, the car showed 36 mpg for that trip. That being said, 31 mpg combined, as advertised in the Front Wheel Drive (FWD) model, should be easily achieved.

If you’re looking at the All Wheel Drive (AWD) model be aware of the differences and make sure you really do need it. If you live in Southern California and go skiing a few times a year it may be smarter to get the FWD version and some chains. Or rent another SUV for your winter trips.

Some quick notes: the AWD model gets 28 mpg combined (FWD gets 31 mpg), and the AWD model has a 7-speed dual clutch transmission known as the DSG which is better for sporty driving but not as smooth in the city as the 8-speed.

Also, powering two additional wheels means more weight, the AWD weighs 255 lbs more. Plus that AWD system has to fit somewhere, so cargo room is reduced. The AWD has 3 cubic feet less space in the trunk. With the seats folded down for maximum cargo room, the difference becomes 5.7 cubic feet between the FWD (65.9 cubic feet) and the AWD (60.2 cubic feet). 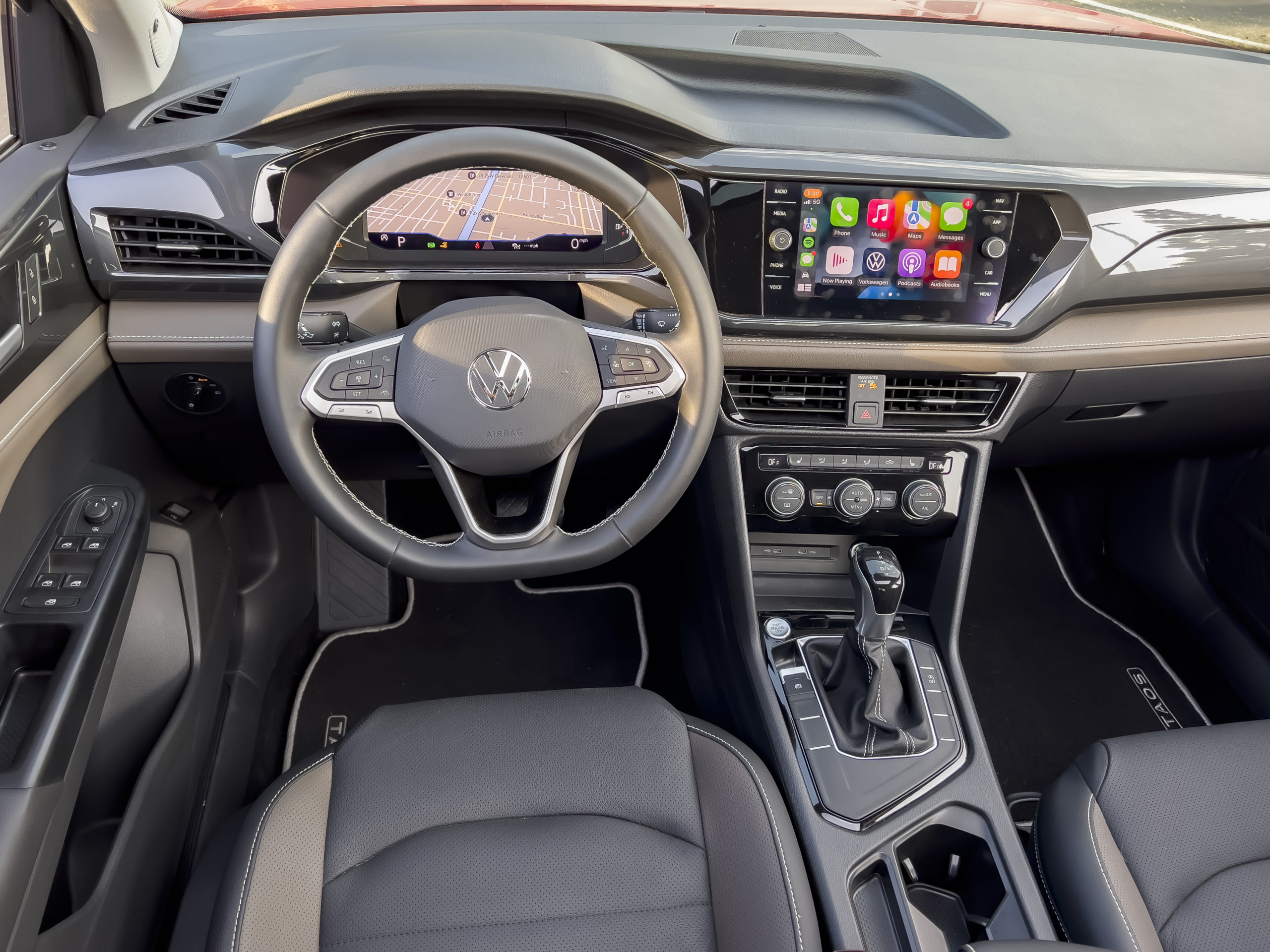 Nice, nice, nice! The first thing you’ll notice from the driver seat is the VW Digital Cockpit. The entire gauge cluster is a digital screen with so many options for different view modes that I didn’t get to test them all in my week with the car. The view I found most convenient was full-screen navigation.

The controls are easily laid out on the steering wheel and had a tactile feel. The center stack has a large touchscreen display with wireless Apple CarPlay. Below the HVAC controls is a wireless charging pad that fits the iPhone 13 with no issue and also houses two USB-C ports.

That’s the tech for the driver, but what about the driving tech? Glad you asked AutoWise reader! The driver assistance features impressed me considering this SUV has a base price of ~$25,000.

In my mind “self-driving” sort of assistance features can be split into two parts — steering control and throttle/braking modulation. In some cars, the radar cruise control system is so responsive that if a car merges in front of you the driving system brakes abruptly, causing a very uncomfortable head jerk and the sensation that your face might hit the windshield if the car slammed on the brakes any harder.

On a class grading scale, I would give the 2022 Volkswagen Taos’ throttle control an A-. It felt very human-like with gradual speed control. However, at times, I found it moved too slowly especially when using the system around town from a stop at a traffic light. Several Priuses went around me as the car accelerated too slowly.

The lane-keeping assist feature worked plenty well and handled curves in the road fine but felt very artificial as I could see the steering wheel micro adjusting every couple of seconds. Overall, if you’re getting a Taos make sure to option it with I.Q Drive.

Option Your Own 2022 Volkswagen Taos 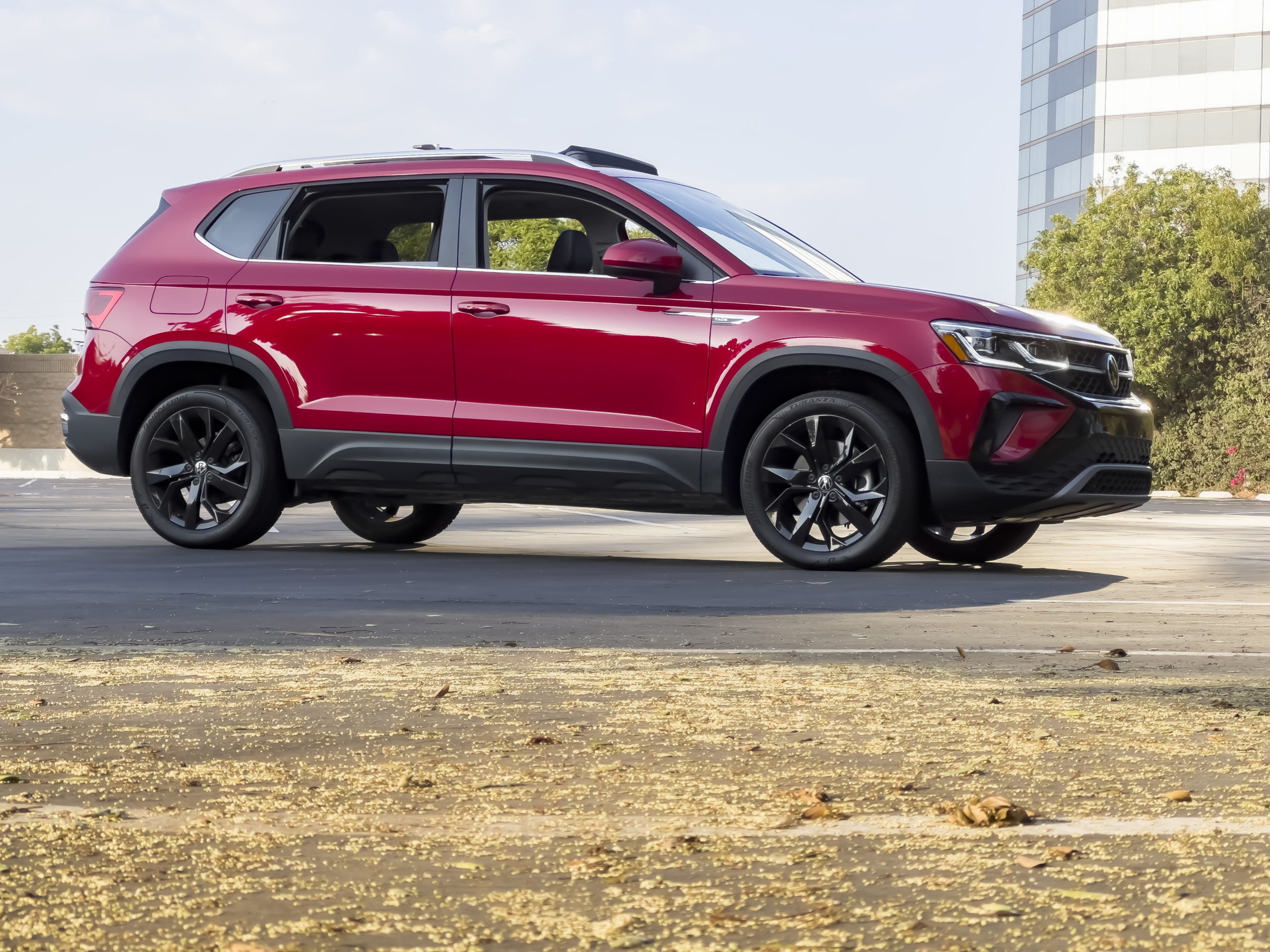 The 2022 Volkwagen Taos is big inside but not big to drive. It’s roomy and comfortable for everyone with a trunk large enough to pack weeks of camping gear. My must-have options would be the panoramic sunroof ($1,200) as the it makes the interior much more alive and spacious and the I.Q drive system (~$1,000).

My biggest headache with the Taos was the lack of a power lift gate. The key fob has an option to remotely start the engine to warm up the car, but the trunk button only unlocks the trunk! It doesn’t even pop it slightly for you. In an age where many cars have foot-activated trunk opening sensors, having a manual trunk on an SUV was a letdown.

That being said, the 2022 Volkswagen Taos was decidedly better than it looks on paper and relatively affordable too, with the base S model starting in the range of $22,995 MSRP and the range-topping SEL bumping the base MSRP to $31,490.