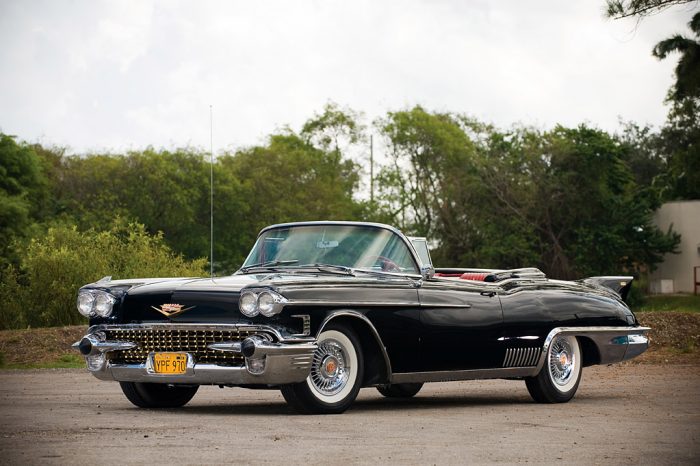 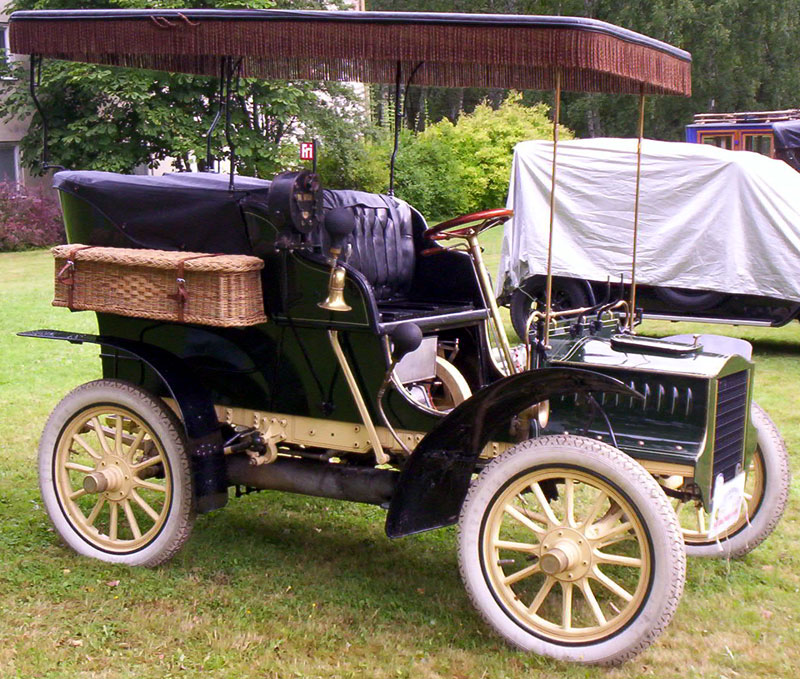 The Cadillac convertible…now that right there is a pair of words that can leave some mouths watering. When you combine Cadillac, the preeminent North American luxury brand, and a drop top, you get some seriously sexy metalwork, to say the least.

Cadillac has been building cars since 1902. The earliest cars were all open air models like the majority of the automobiles of the era. A true Cadillac convertible didn’t make its way into the market for several years. Some fans of the automaker might argue that the 1905 Model D with its manual top is the first Cadillac convertible; however, others have pointed out that the Model C had a removable tonneau cover and was sold a few weeks earlier. 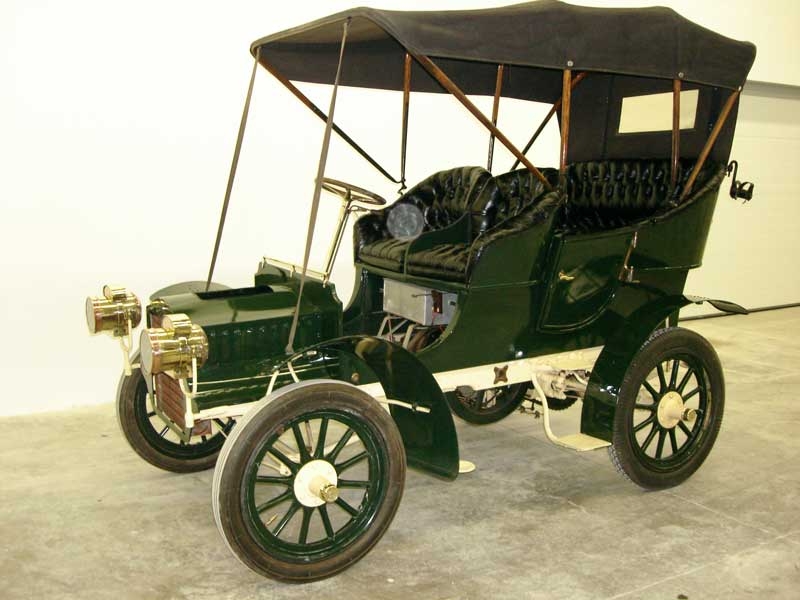 Since we mentioned it earlier, we thought it would only make sense to start our history of the Cadillac convertible with the debate over which is the first. We fall on the side of the 1905 Model D just because it has what is arguably a manual convertible top despite remaining a mostly open car. Was this the first true convertible for sale from Cadillac?

The 1905 Cadillac Model D was powered by a 300 cu-in (4.9L) four-cylinder L-head engine that struggled to create 30 hp. That may sound abysmal compared to the output numbers of modern cars, but it was above average for 1905. The Model D also featured a governed throttle; basically, the first cruise control. 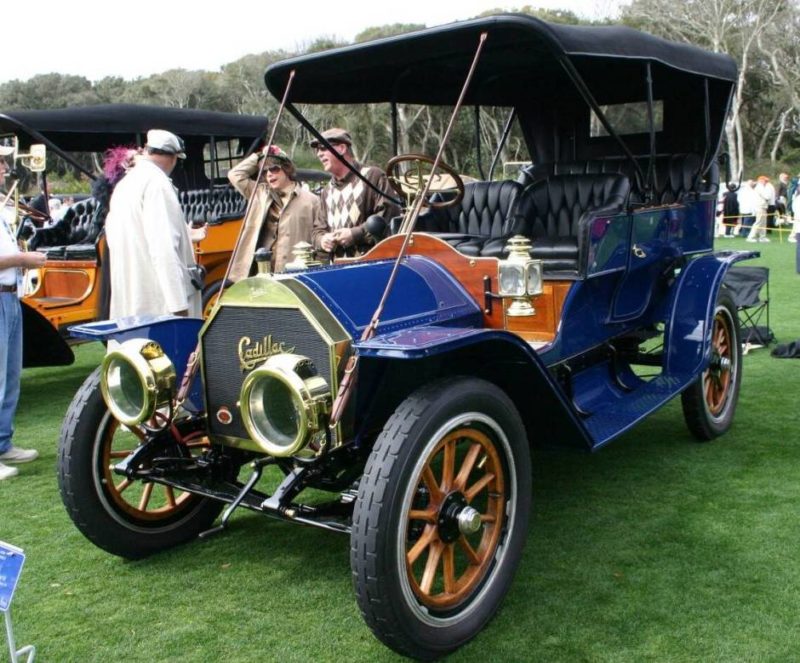 So, we slipped and added a second car from the first decade of the 20th century. The reasoning is simple: styling changes and innovations. You can see the design changes between the 1905 and 1909 models in the images above. On top of that, the 1909 Cadillac Model 30 took the Cadillac convertible to a higher level with a stronger engine and a sliding gear transmission to replace the overly complicated planetary gear used in the 1905 model. A few years later, in 1912, Cadillac introduced its first self-starter to the Model 30 line. A highly sought after classic car. 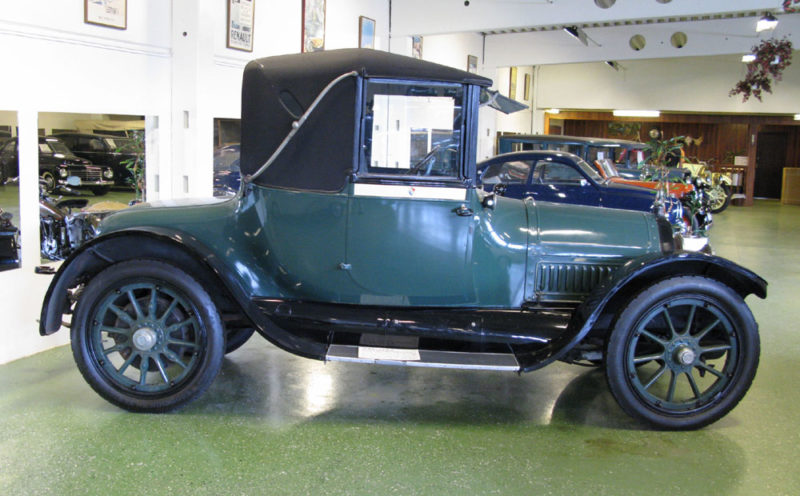 The Cadillac Type 53 revolutionized the automobile industry in three very important ways. Most significantly, this Cadillac convertible was the first automobile to use the modern control layout of the gear lever and handbrake in the middle of the front two seats. Secondly, it was the first Cadillac to use a key to start the ignition. Lastly, it was the first car to use three pedals to work the clutch, brake, and throttle. 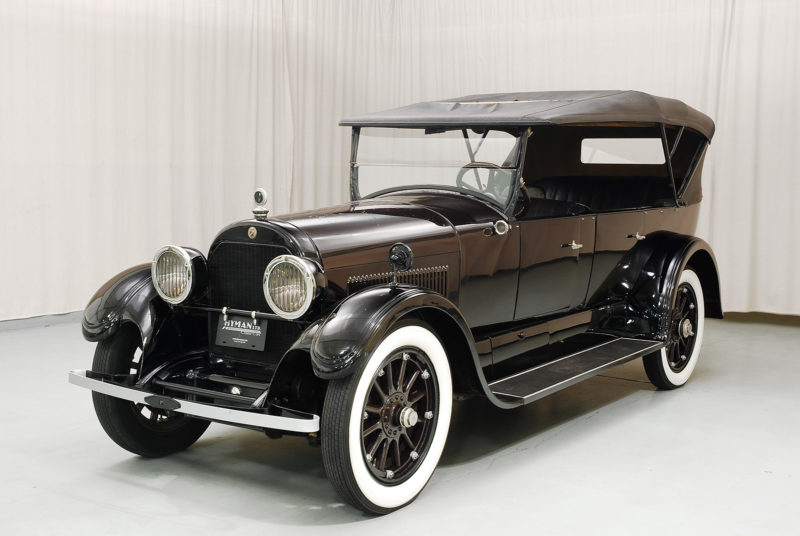 The 1924 Cadillac Type V-63 is significant on a few levels. The first was brought to the table by Peerless Motor Company. It was a cross-plane crankshaft that greatly smoothed out the engine. The improved balance from the new crankshaft made for a more powerful and efficient engine. Additionally, the Type V-63 was the first Cadillac to feature front-wheel brakes. For 1924, the only Cadillac convertible was the Touring edition of the Type V-63; however, different coaches were available starting in 1925. 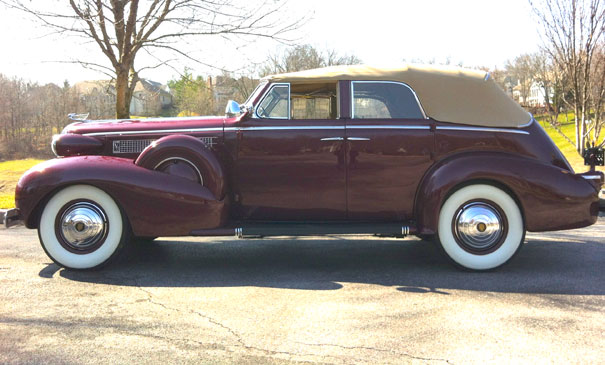 As you can see, the 1937 Series 60 Cadillac convertible is a beautiful car, but it did not have to stand on looks alone. The Cadillac Series 60 was an acknowledgment by the automaker that it needed a mid-priced offering to become more financially solvent. Despite being lower priced than other Cadillac models, the Series 60 offered a few innovations. These innovations included: a Fisher Body Turret Top one-piece roof, Bendix dual-servo brakes, and the ”Knee-Action” independent suspension that Cadillac installed in its top-shelf offerings.

The Series 60 also offered a V8 capable of 125 hp, quite a bit more power than many mid-priced cars of the time. The Series 60 accounted for half of all Cadillacs sold its first year on the market. 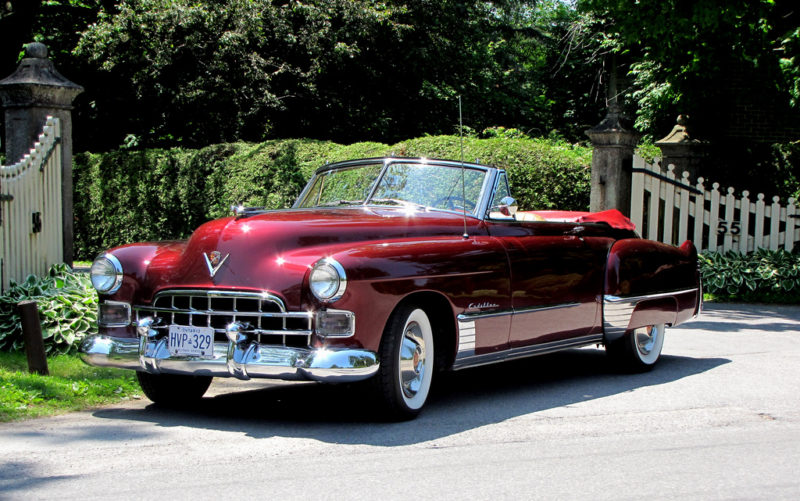 Between 1940 and 1965 the Series 62 was Cadillac’s entry-level model. The 1948 model that we have chosen to represent this decade of the Cadillac convertible was part of the second generation of the Series 62.

Examples from the first generation were very sexy cars, but the second-gen units really stand out. The second-gen cars featured front fenders extending backward to become part of the front doors and rear fenders that moved forward to become part of the rear doors. On top of amazing aesthetics, the 1948 Cadillac Series 62 was fitted with a brand new type of fresh air ventilation system. This system used air ducts coming from the grille instead of cowl ventilators. The Series 62 also saw the handbrake control changed to a tee-shaped handle instead of a lever. The radiator was equipped with an early version of a thermostat instead of using shutters to control the engine’s temperature. 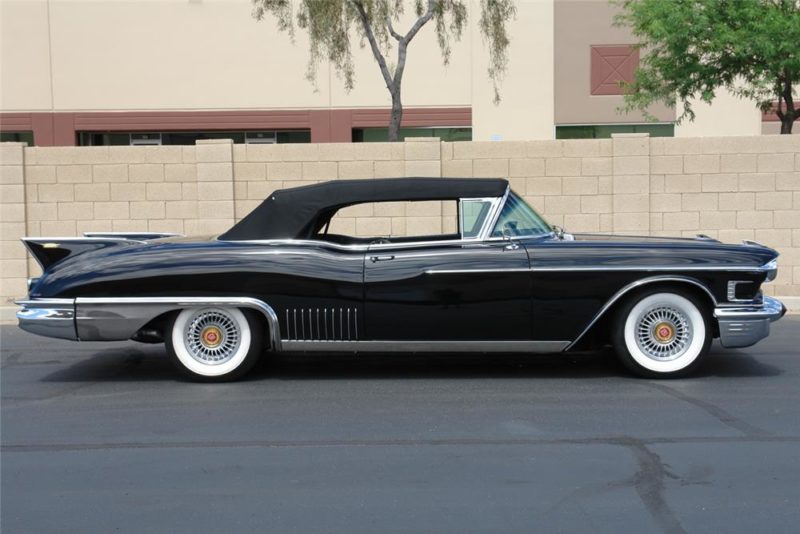 For 1958, the Eldorado Brougham was the most expensive Cadillac convertible available. It was the last model year to feature a rear-end with the low, downswept fenderline and pointed in-board fins that were affectionately called ”chipmunk cheeks.” Cadillac introduced an all-transistor car radio with 13 transistors in 1958, continuing its commitment to innovation.

Until 1985, the Fleetwood designation was simply a top trim level for a Cadillac convertible or a hardtop. Cadillac did not introduce many innovations for the 1966 model year, but the model year is significant because it was the last year the Eldorado was sold as a standard rear-wheel drive car.

On top of its great styling and beauty, this Cadillac convertible was powerful. The output from the 429 cu-in engine was an impressive 340 hp and 447 lb-ft of torque. With peak torque available at 2,800 rpm, this Cadillac could get you out of some pretty sticky driving situations. 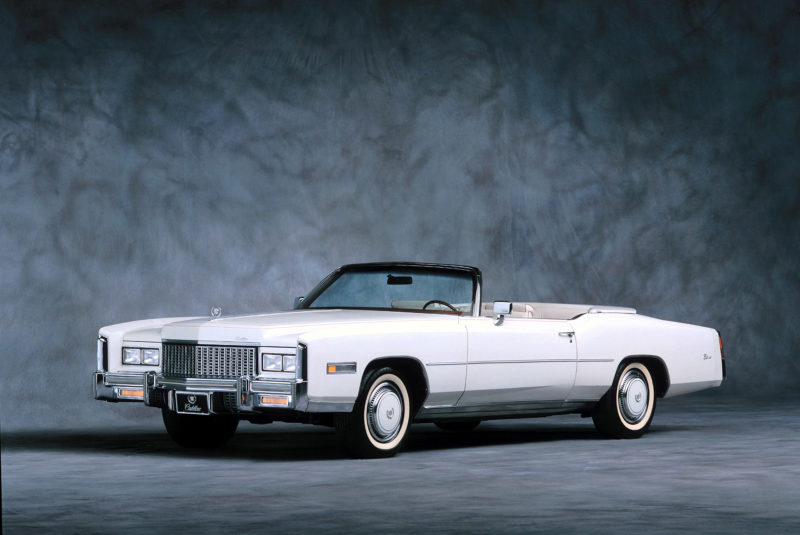 On a side note, Cadillac sold 200 Bicentennial Editions in 1976, commemorating America’s 200th birthday. These were all convertibles and are very collectible. 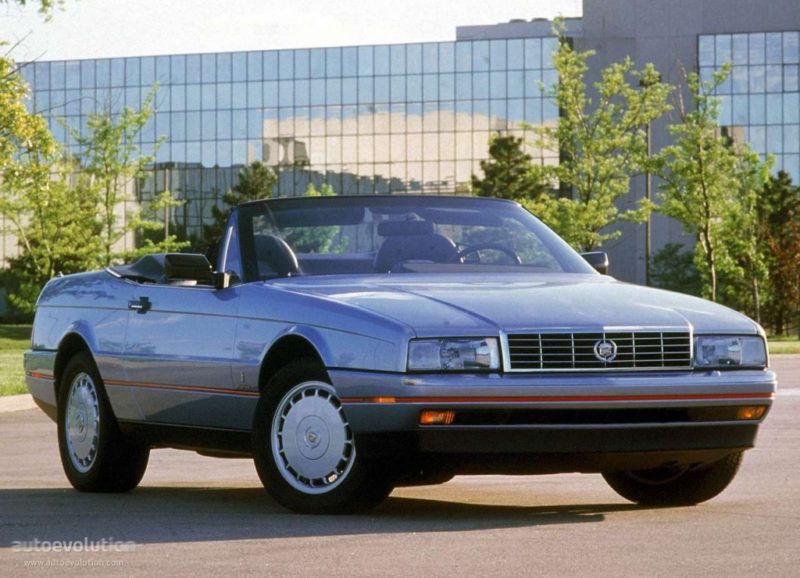 The Cadillac Allante was produced between 1987 and 1994 and was the first roadster to ever be offered by the automaker. The body was built in Italy by Pininfarina and flown to Detroit for final assembly. This two-seat Cadillac convertible was designed to compete with Mercedes-Benz and BMW. In 1987, the Allante had an interesting removable aluminum hardtop and was the first car to have a power retractable antenna for the radio and an onboard cellphone. If buyers opted to have the Cadillac cellphone installed, it was placed in a lockable center console.

To allow it to compete with Mercedes-Benz and BMW offerings, the Allante was powered by a 4.1L V8 with high-flow cylinder heads and a tuned intake. The Allante also featured a module that would change burned-out exterior bulbs automatically. 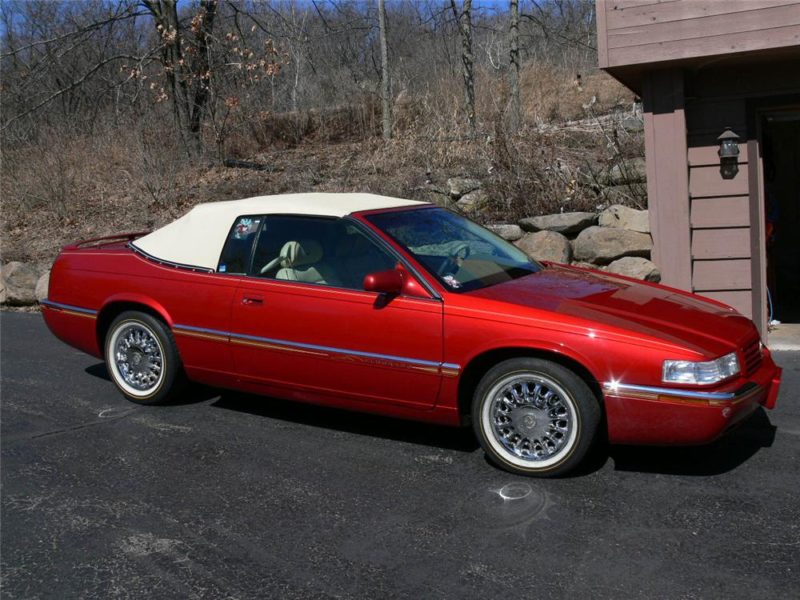 The 1996 Cadillac Eldorado convertible was part of the Eldorado’s tenth generation. It stands out from the other tenth-gen convertibles because it offered a mild refresh of the exterior and an all-new interior. The exterior changes included new front and rear bumpers, the addition of side molding, and an all-new grille. The interior saw a new style of upholstery, a larger gauge cluster, daytime running lights, and rain-sensing wipers. 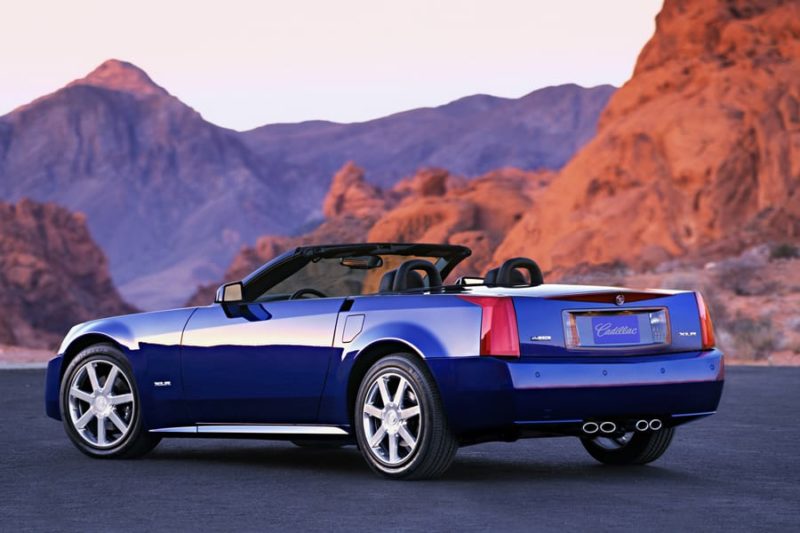 Cadillac built the XLR for the 2004 through 2009 model years. It was only the second roadster offered by Cadillac luxury roadster. This Cadillac convertible brought elegance and power to the world.

Based on the Chevrolet Corvette C6, the XLR was the first production Cadillac convertible to have adaptive cruise control. Other standard features were heated and cooled leather seats, wood trim, a navigation, audio, and DVD system combo, and a retractable hardtop. Power came from a 4.6L V8 with an output of 320 hp and 315 lb-ft of torque. Unfortunately, the XLR was the last Cadillac convertible produced. 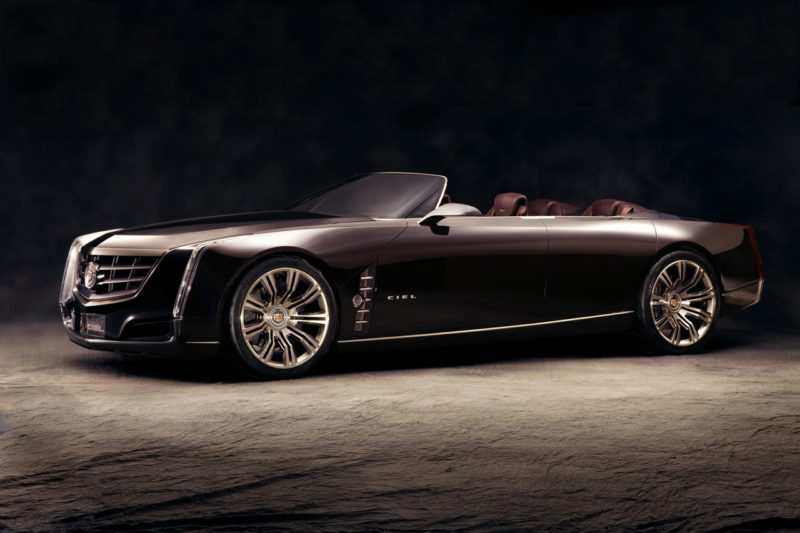 The Cadillac XLR may have been the last Cadillac convertible to have been produced, but Cadillac has displayed the Ciel concept car at multiple auto shows. The Ciel features a hybrid electric powertrain that is anchored by a twin-turbocharged 3.6L V6 capable of 425 hp. The Ciel offers rear suicide doors and a smooth wooden dashboard. Cadillac has kicked around the idea of building a production car based on the Ciel, but nothing has come to fruition so far. Here’s to a sleek and sexy production Cadillac convertible in the near future.

What have we missed? Naturally, there are models like the Cadillac Eldorado Biarritz converitble, or the classic Cadillac DeVille convertible that could also be put on any list celebrating Caddy’s top-down history, but what else do you think should’ve been included? Which convertibles for sale did we miss?


The Enthusiast's Guide BMW E92 M3 Mods
R34 GTR Z-tune #01 Owner Looking to Sell for $1 Million?
8 Biggest V8 Engines Detroit Ever Sold in a Car And 5 They D...
The Best Online Car Auctions for Buyers and Sellers
8 Cars With The Most Lemon Complaints
Fox-Body Mustang Hoonicorn: Ken Block Dreams Up The Hoonifox