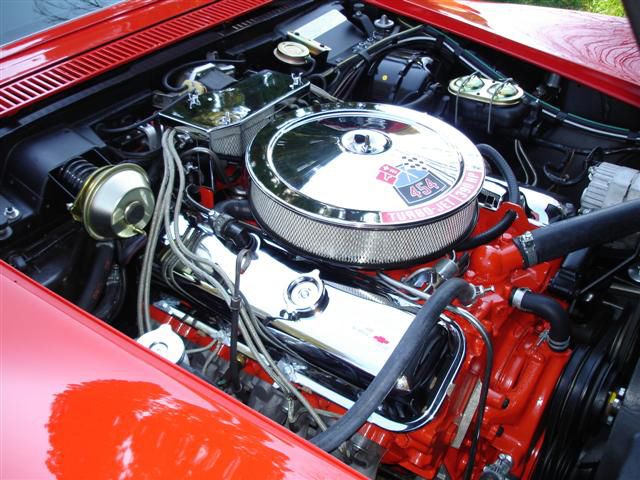 The Chevy Big Block is the stuff of legends. While it wasn’t produced as long as the small block Chevy, it all but dominated the ’60s. Let’s look at the 10 best big block Chevy engine units ever made!

A quick note – we’re only counting those engines delivered by Chevrolet in passenger cars (that regular customers could order). So special builds and crate engine packages don’t count nor due engines that were taken over by the truck division and re-purposed as a workhorse. However,  it should be mentioned that the Vortec 8100, based on the Big Block engines, produced 340 hp NET – over 400 hp GROSS (the way engines were measured in the ’60s) before it was discontinued in 2009. Of course, custom units with aftermarket performance parts or racing focused engine parts have also been excluded. 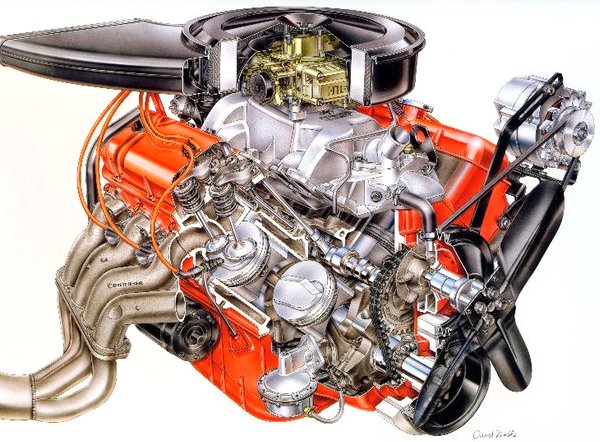 Oh, one more thing. We’re using Chevrolet’s published horsepower data. There’s plenty of discussion regarding whether engines were underrated and by how much and we didn’t want to take the focus off the engines themselves. If you’re interested in what they experts say, check out:

Now, sit back, relax, and feel the thunder as we check out these Chevy Big Blocks.

Chevrolet brought out the 454 Big Block just as the curtain was lowering on the Classic Muscle Car Era. There were to be three versions of the motor: the relatively mild LS5, the more powerful LS6, and the street/strip oriented LS7 (which, unfortunately, was never delivered to a customer). Bore and stroke for the two consumer engines were the same: 4.25-inch bore to a 4.00-inch stroke, with a compression ratio of 11.25:1. The LS5 utilized a Rochester Quadrajet carburetor and hydraulic lifters. When installed in the Corvette, the LS5 produced 390 hp at 4800 rpm (hold onto that for a few minutes). That’s one hell of a powerful Chevy engine.

The L36 engine type was based on the standard 427 cast iron Chevrolet big block, and it shared the same bore and stroke with other 427s (4.25″ x 3.76″). The compression ratio was 10.25:1. The engine featured a four-barrel Rochester Quadrajet  mounted to an aluminum intake manifold. The cam drove through hydraulic tappets. Power output was 390 hp at 5400 rpm. 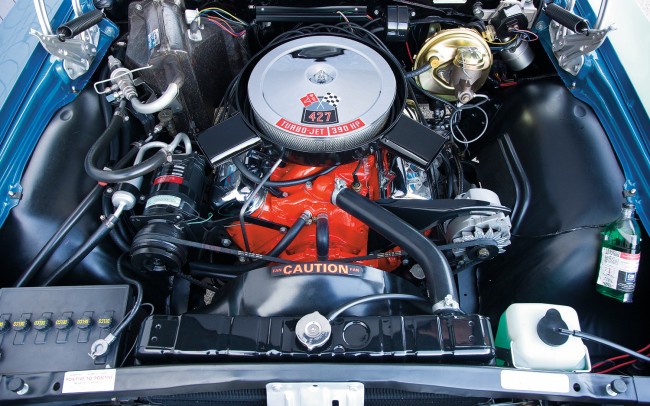 There was no real magic in the L68, it was on top of the engine. Chevy took the L36, replaced the single Rochester Q-Jet with three two-barrel Holley carburetors, fitted to the Tri-Power intake manifold (which, despite the shape of the air cleaner, were mounted in a straight line between the heads). Despite being one of the most powerful engines on the road the L68 made it easy to drive. Despite the use of the hydraulic cam, the engine still produced 400 hp and with the progressive nature of the three carburetors, acceleration wasn’t so much of an on/off switch. 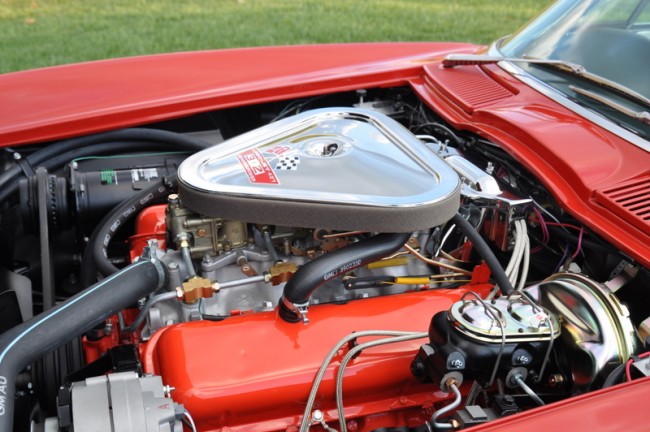 In 1966 the L72 427  was the most powerful engine available in the Corvette, and between 1966 and 1969 was the most powerful engine available in full-sized models. Its compression ratio was a premium-fuel only 11.0:1 and the engine produced 425 hp at 5600 rpm. The engine was constructed around a reciprocating assembly of forged steel crank, high-alloy forged steel rods and forged aluminum domed pistons. The high lift solid tappet camshaft drove a set of canted-valves mounted in cast-iron “High-Performance” rectangle-port heads, topped by an aluminum dual-plane intake manifold  with a 780 CFM Holley carb. 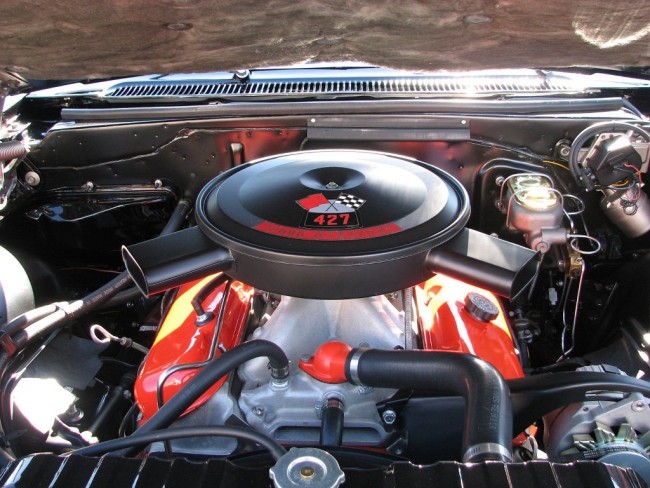 Up until now, all of our horsepower leaders have been larger displacement versions. The 396 L78 motor is the only one of the “smaller” Big Blocks to crack the top 10. Introduced in 1966 at 425 hp when installed in the Corvette, its rating was then inexplicably dropped to 375 hp for future years. The L78 has a four-barrel 800 CFM Holley carburetor atop an dual plane aluminum high-rise intake manifold, 11.0:1 compression forged  pistons, forged steel crankshaft, four-bolt mains, the same high-lift solid lifter camshaft as used in the L-72, rectangular “square” port closed chamber heads, and four-bolt main caps. 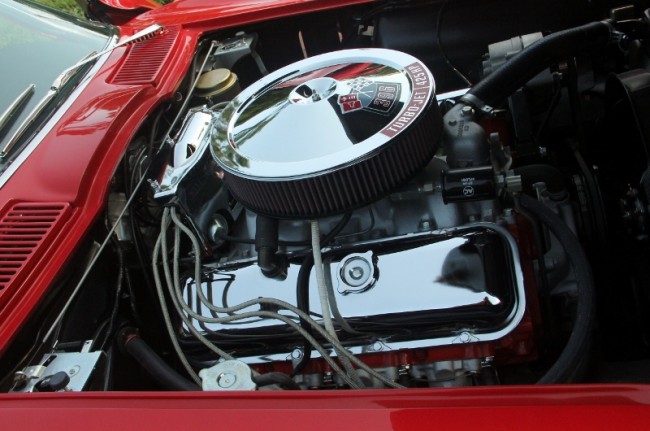 The L88 was a race motor, plain and simple. It offered drag and road course competitors the ability to purchase a car with a motor that was ready for the track with only simple modifications. The L88 ran a crushing 12.5:1 compression ratio (requiring super premium or race gas), forged pistons, rods, and crank (on four-bolt mains, of course). Atop the engine sat a fuel guzzling 850 CFM Holley four-barrel carburetor bolted to a high-rise aluminum intake manifold feeding high-flowing aluminum cylinder heads.

BTW, drawing 850 CFM is the same as sucking all the air out of an overseas cargo container in about 80 seconds. The L88 was rated at 430 hp at 5200 rpm, though the engine could rev a great deal higher. This is one case where Chevy admits to under-rating the engine to keep street drivers from purchasing a race motor. 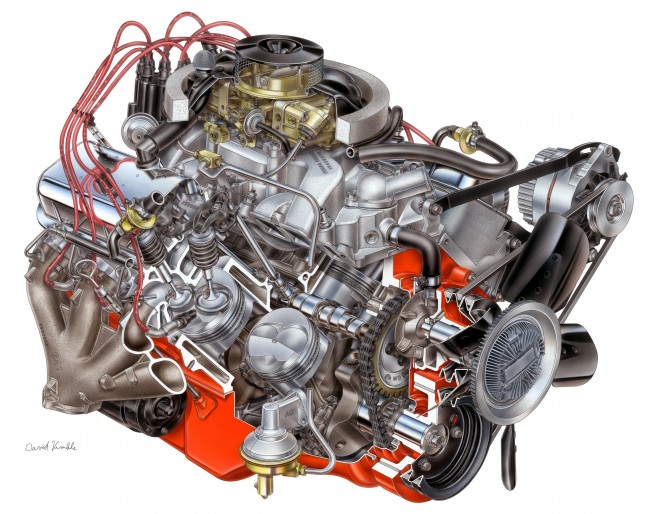 I can imagine the conversation around the coffee pot in the Chevy Engineering break room: “What do you guys think about dropping the all-aluminum ZL1 Can-Am engine into a Camaro and go for the NHRA Super Stock championship?” I can’t imagine it started much different, but there was a memo or two involved. The ZL1 had specifications nearly identical to the  L88 427, but featured an aluminum cylinder block in addition to aluminum cylinder heads, which dropped total engine weight to around 575 lbs. And right where you need the take the weight off a drag car – the nose. The engine was also fitted with the new open combustion chamber cylinder heads, a light weight aluminum water pump, a camshaft that was slightly “hotter” than the L88’s, and a specially tuned aluminum intake manifold. Like the L88, the ZL1 required 103 octane gasoline, used an unshrouded radiator, and had poor low speed idle qualities – all of which made the two engines largely unsuitable for street use. 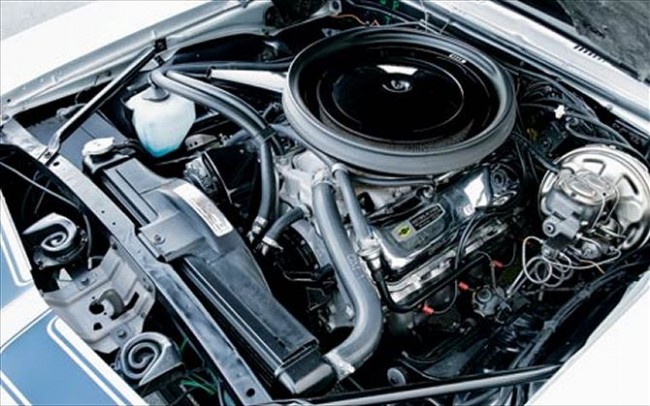 In 1967 Chevrolet introduced the L71, a variant of the L72. This new motor had three two-barrel carburetors – known as “Tri-Power” – in lieu of the single four-barrel of the L72, and a 435 horsepower rating. Aside from the intake setup, the two motors were identical. Both engines were constructed around a reciprocating assembly of forged steel crank, high-alloy forged steel rods and forged aluminum domed pistons. The high lift solid tappet camshaft drove a set of canted-valves mounted in cast-iron “High-Performance” rectangle-port heads,

The L89 was identical to the L71, with the exception of the cylinder heads. the heads for the L71 were cast iron while the L89 heads were cast from aluminum. The engines were otherwise identical, even sharing the same intake valves: a robust  2.195-inch intake, but with a slightly larger 1.845-inch exhaust. Rated power was the same, at 435 hp, the primary difference was a weight savings of about 75 lbs. 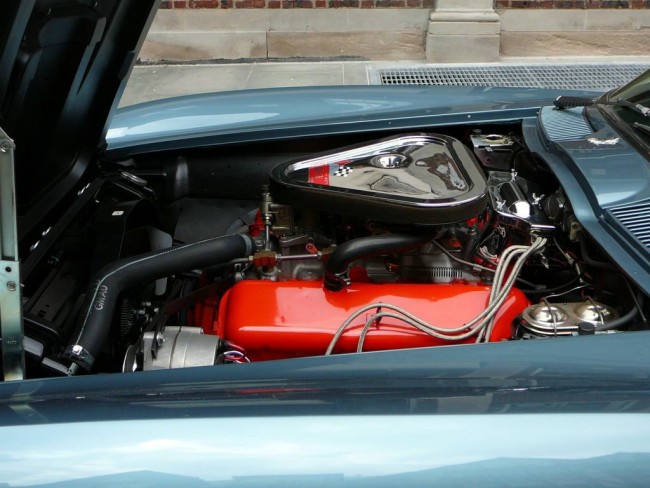 The 454 LS6 used the same block as the LS5, however a 800 cfm Holley four barrel  replaced the Rochester Quadrajet atop the aluminum intake manifold. The engine featured mechanical lifters in place of the hydraulic tappets found in the LS5. The LS6 was built to rev, so components were chosen accordingly: end with four-bolt mains, forged steel crankshaft riding in four-bolt main, forged steel connecting rods and  forged 11.25:1 aluminum pistons. Because of the LS6’s high (6500 rpm) redline, it was able to produce 450 hp versus the LS5’s 390 hp largely due to the 700 rpm higher redline. 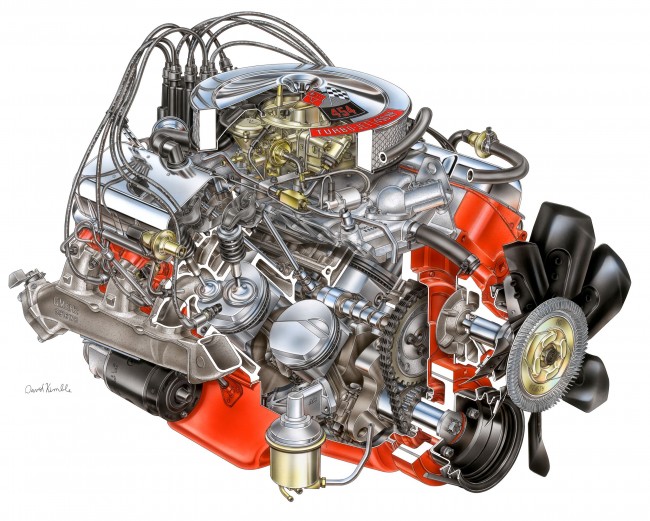 Tall deck, short deck, short block, long block, big block, small block – you name it, Chevrolet has built it. While the Chevy small block was more prolific and talked about more, nothing compares to the legendary big block! As you can see here, there’s plenty of performance being pumped out of these glorious motors, and these 10 are arguably the best production examples ever made.