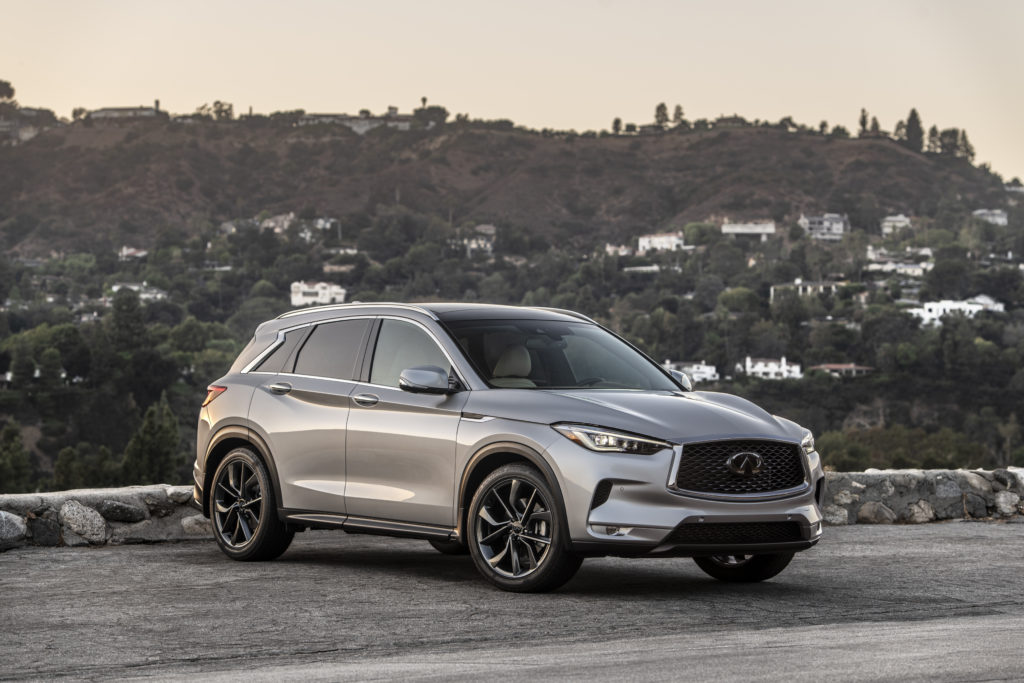 The 2021 Infiniti QX50 carries an advanced powertrain and an attractive face, but a few glitches hold it back from being the most compelling choice in its segment. We spent a week driving the new crossover and came away impressed with its beautiful interior, abundant tech, and advanced powertrain.

Outside of a few new features and colors, the 2021 Infiniti QX50 is quite similar to the one we saw last year. The crossover now comes standard with a Wi-Fi hotspot and the ProPilot Assist safety package is now standard on more of the lineup.

Every model is still powered by the trick VC-Turbo engine, which uses a unique variable compression system that allows it to shift between low compression for turbo power and hard acceleration, and high compression that offers efficiency when the engine isn’t being stressed.

Get past the hype and it’s just a smooth, mostly refined powertrain. There’s nothing shocking when the pedal is pressed, but 268 hp and 280 lb.-ft. of torque is plenty to motivate the QX50 with urgency when needed. Around town and at low speeds, there’s almost no indication of the combustion taking place under the hood, but that changes when the vehicle is pushed. It’s then that the engine’s song becomes coarser and louder than it should be, especially given the middling power output. That problem is compounded by the CVT, which lets the engine wail and whine away. 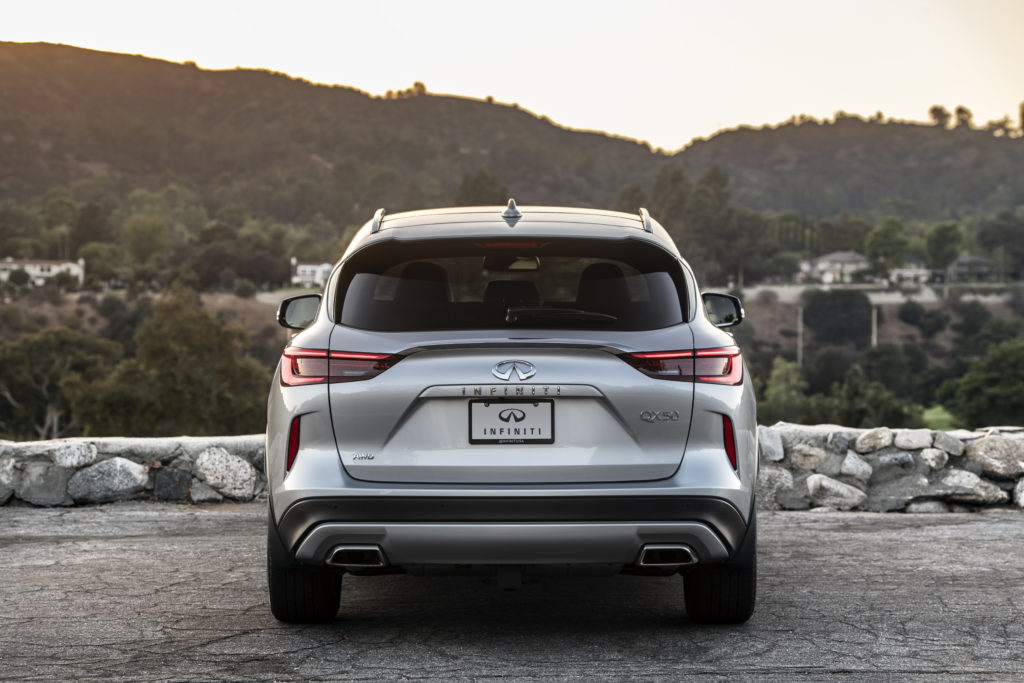 The QX50 is, above all else, a comfortable cruiser. There are very few times when its handling and road manners are unbecoming of a premium-level vehicle, including when driving over rough, broken pavement and unpaved back roads. Those capabilities translate to a serene experience inside the cabin, though numb steering and a softer than expected brake pedal are reminders that expecting perfection is a fool’s errand in this or any automotive era. 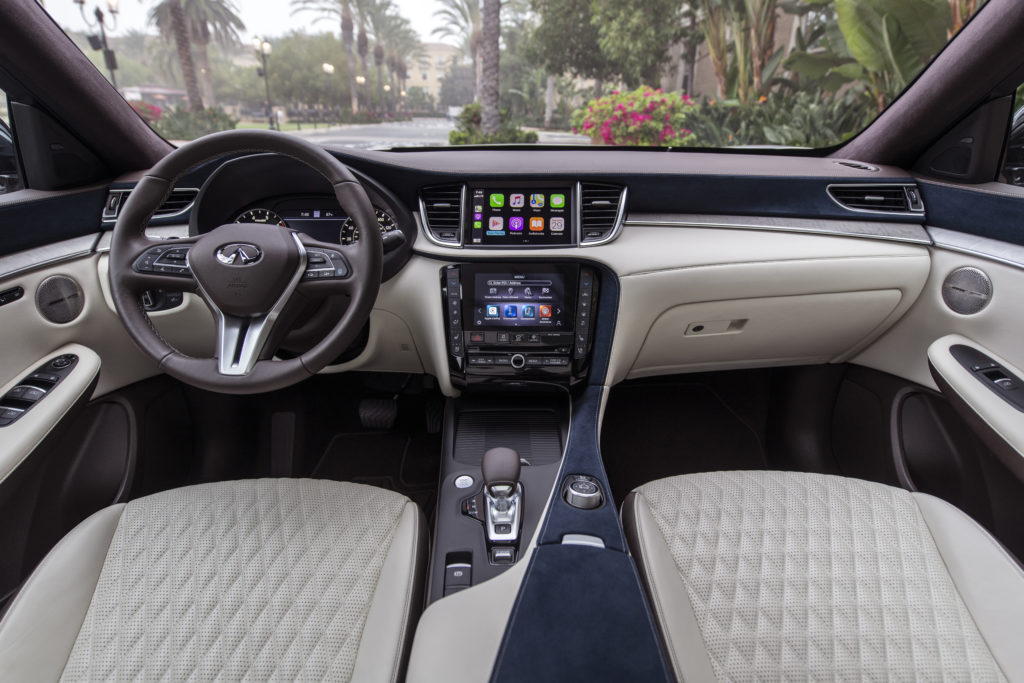 Surprisingly, the crossover’s petite exterior dimensions don’t translate to a minuscule back seat, as expected. Tall drivers with kids will still need to install car seats on the passenger side to avoid space concerns, but there is adequate legroom to accommodate most rear-facing and full-size seats without hassle.

The real gripe here is with headroom and with the shape of the rear doors. Loading a child into a rear-facing seat is made much more difficult by the low roofline and funky door shape, both of which lead to bumped heads and swearing parents.

Inside, the QX50 is awash with premium materials and playful color contrasts that serve to accent various details throughout the cabin. The quilted and perforated leather upholstery is deep, supportive, and well-bolstered without being too aggressive. The white leather looks spectacular!

The center console is covered in a mix of the same leather and Alcantara that sweep in a curve around the shift lever and cupholders. It’s a beautiful touch, but one that limits storage space in the console. Elsewhere, aluminum and woodgrain accents flow around the cabin in long, uninterrupted lines. It’s truly a beautiful place to spend time, made even more so by the natural light let in by the panoramic sunroof. 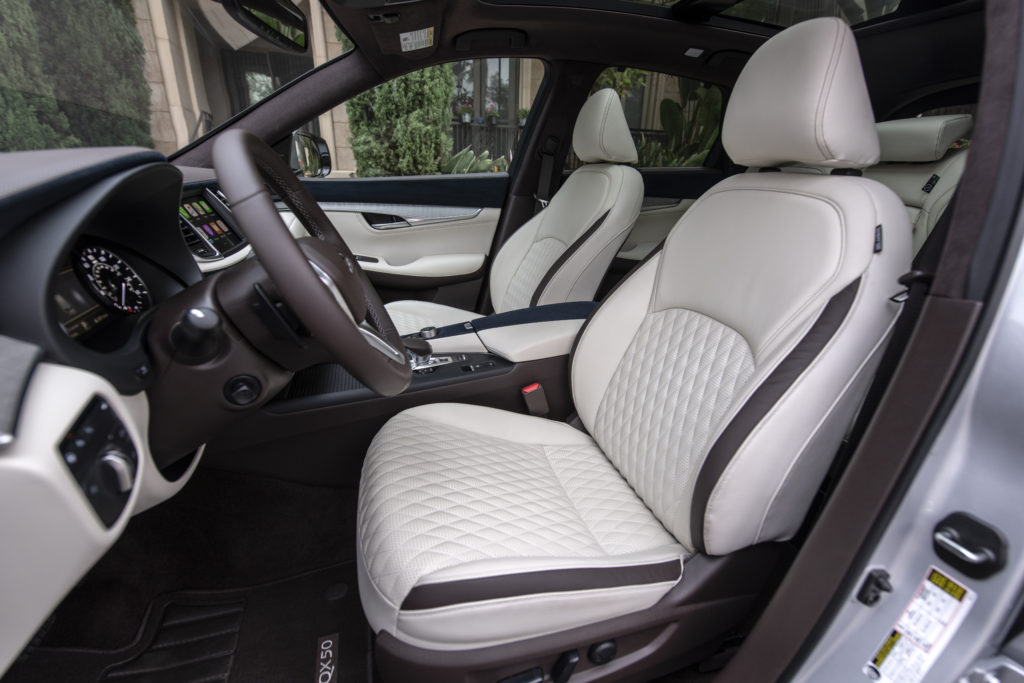 The center stack is where things start to go off the rails a bit. As it has in previous models, Infiniti opted for a dual-screen setup to manage everything from vehicle settings to handling Apple CarPlay. Surrounding the lower screen, there are physical controls for temperature settings and for the heated/ventilated seats, but the lower touchscreen has to be used for access to the “deep” climate settings. It’s unnecessarily complicated and creates a learning curve for even the techiest of people. That said, the system is smooth and responsive and is easier to use than in other Infiniti vehicles from years past. Apple CarPlay and Android Auto offer a familiar interface to work with, which will be a welcome tech respite for many people.

In order for a crossover to succeed in rising above the noise of what has become a cacophony of vehicles, it has to do at least one thing better than its competition. It’s most accurate to say that the 2021 Infinity QX50 does one and a half things better than its competition, but the lack of an available hybrid weighs heavily on that half point. The Infiniti’s interior cocoons its occupants and the style inside is on par with vehicles costing twice as much. That half-point? It’s for fuel economy, as it’s good but a hybrid would be better and a welcome addition for many buyers.

For all the details on the 2021 Infiniti QX50 check out InfinitiUSA.com.