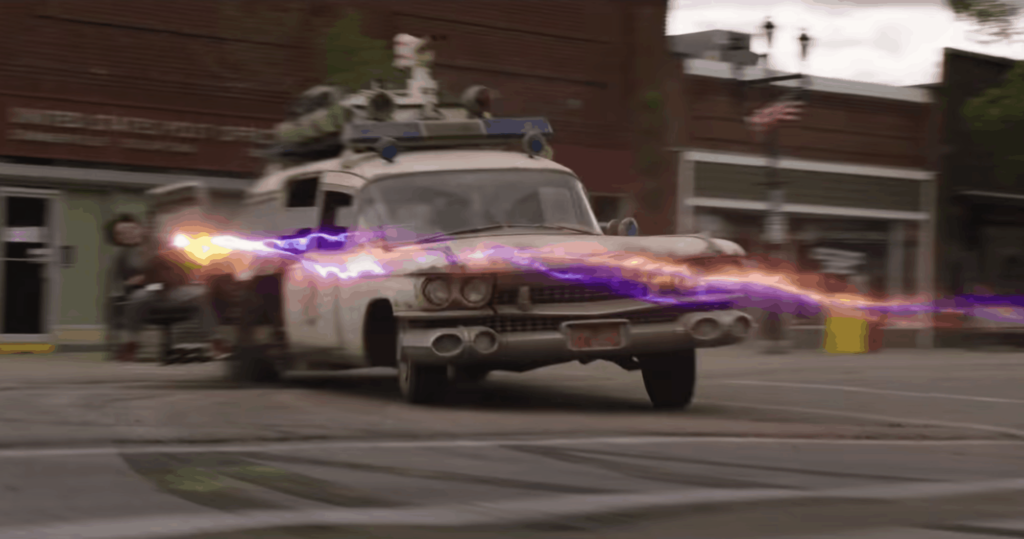 Two things are timeless: Paul Rudd and the Ectomobile. Both make an appearance in the new Ghostbusters movie,  “Ghostbusters: Afterlife.” The new movie, slated to come out March 2021, stars Paul Rudd, Finn Wolfhard, Carrie Coon, Mckenna Grace, Annie Potts, and Ernie Hudson. There are rumors that Bill Murray, Dan Aykroyd, and Ernie Hudson will have some sort of reprised roles as well. And, of course, you can expect an appearance from the iconic Ghostbusters Ecto-1.

Since the 1984 movie, there have been multiple reincarnations of the Ghostbusters including a couple of cartoon series, video games, comics, movie sequels, and a gender-swap movie. In all of these, one thing has been constant — the Ghostbusters Ecto-1 has always made an appearance. And this quirky vehicle will be in the latest movie too. You can watch the preview for “Ghostbusters: Afterlife” to see the latest Ecto-1 in action. 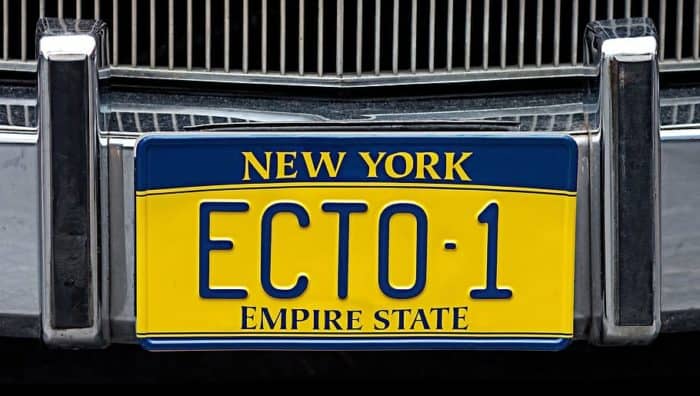 It is not unusual for cars from movies to become icons in their own right. The Ecto-1 is no exception. Ever since its inception, the Ecto-1 has become an inseparable part of the Ghostbuster’s franchise. In the original movie, Dr. Ray Stantz found and restored the automobile. The 1959 Cadillac Futura Duplex endloader was built by the Miller-Meteor company. The car had enough room to hold all of the Ghostbusters and their gear. Plus, once outfitted, the car was a memorable sight.

In real life, Stephen Dane designed and oversaw the creation of the Ecto-1. The original car was a bit unwieldy. It had a 6.3-liter V8, 320 horsepower, and an air suspension system. It measured nearly 20 feet long and weighed around 3 tons. Dane’s original hand-drawn designs are extremely detailed. The plans can be seen in the Ghostbusters Volume 2, Issue 9, in an interview with Dane, or on the Wiki fandom page.

The Ectomobile On The Big Screen 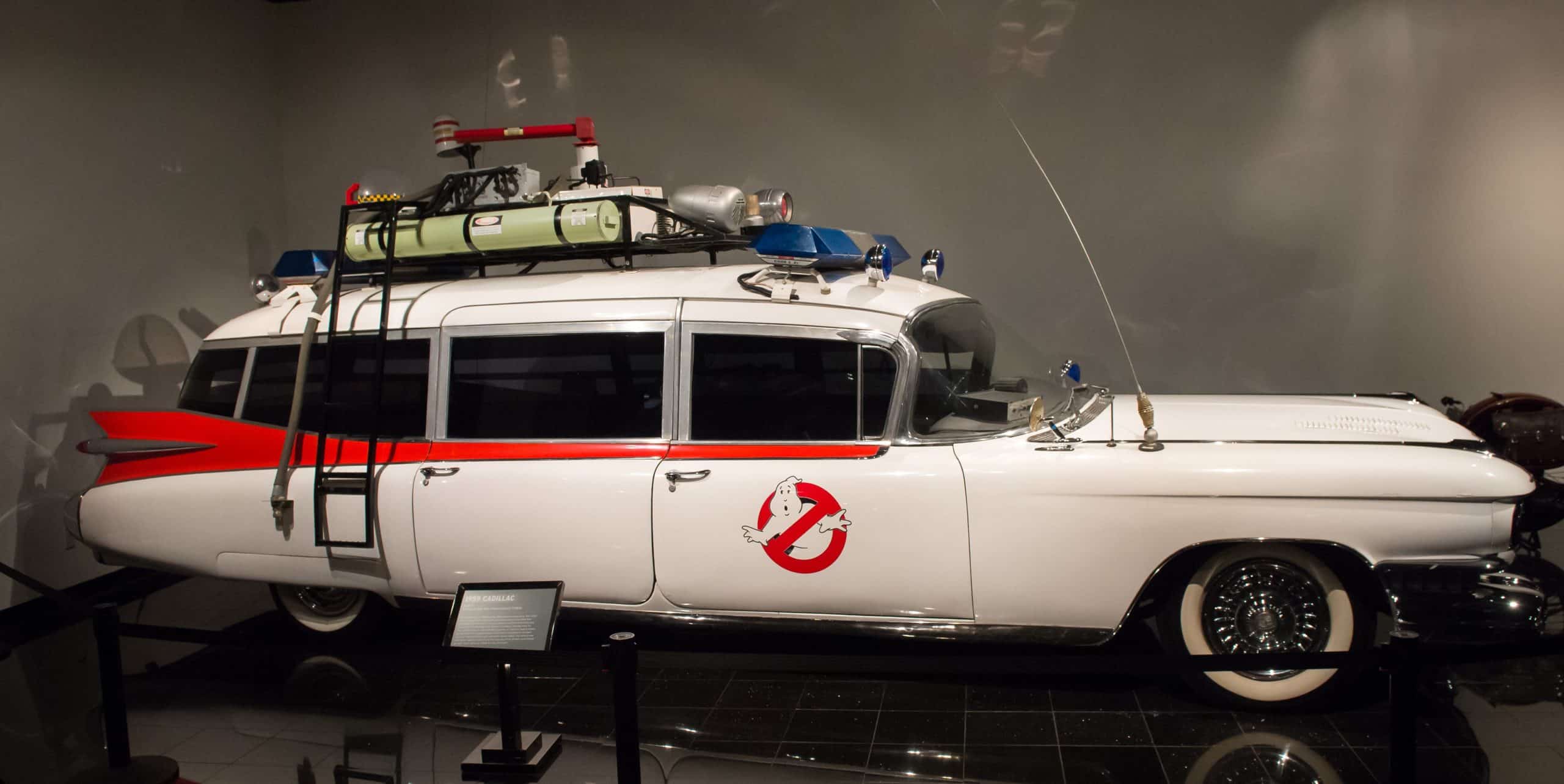 At the time, the tail fins of the 1959 Cadillac Futura Duplex were the largest to appear on a production car, giving this unique car an even more memorable appearance. 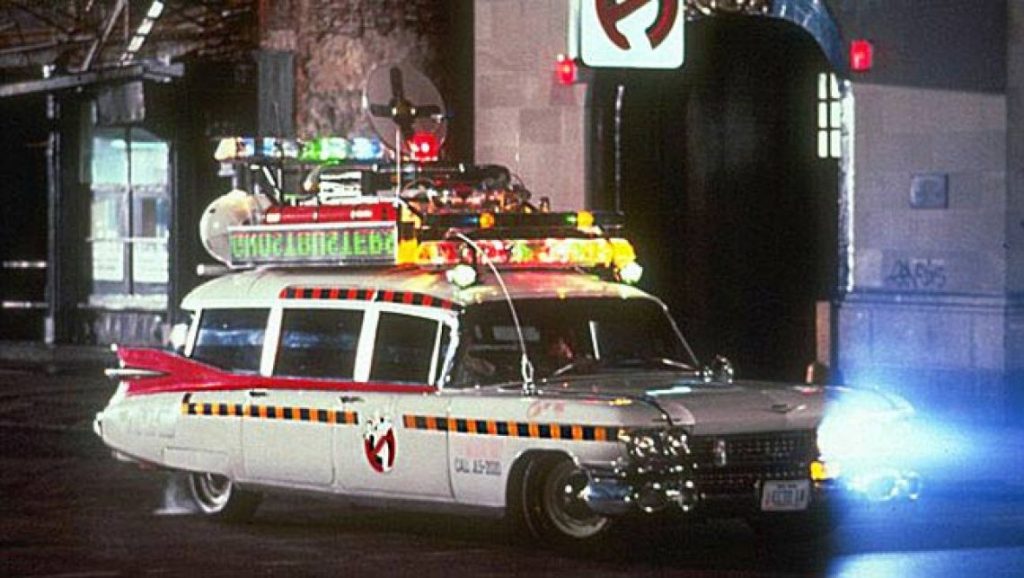 The Ecto-1A had the look and the features of the original but with a few upgrades. The car had more equipment on the roof and digital announcement boards on each side. And it got an updated Ghostbusters logo on the hood and yellow and black stripes on both sides of the vehicle. 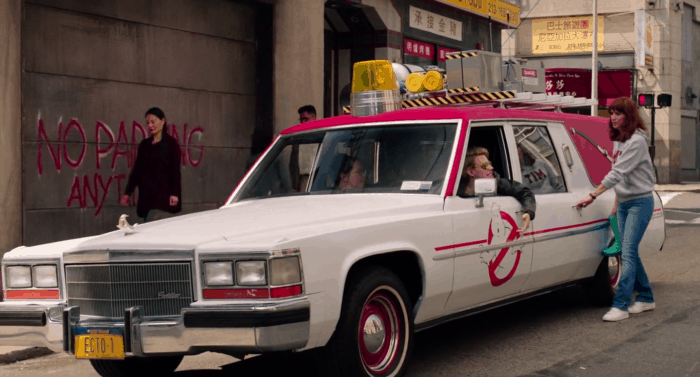 The one movie that didn’t use the 1959 Cadillac model was the 2016 gender-swapped “Ghostbusters.” In this movie, the Ectomobile was reincarnated as a 1984 Cadillac de Ville hearse.

The origin story of the Ecto-1 in the movie is similar to the one in the original 1984 movie, except in this remake the car was a hearse versus an ambulance. The Ghostbusters repainted and modified it to carry their equipment. Otherwise, it has a similar look and feel to the original Ecto-1, with the exception of the nuclear reactor fitted on the top of the vehicle. In the movie, the Ghostbusters team actually use this reactor as a weapon to fight the ghosts. They sadly end up destroying Ecto-1 in the effort to close the paranormal portal. 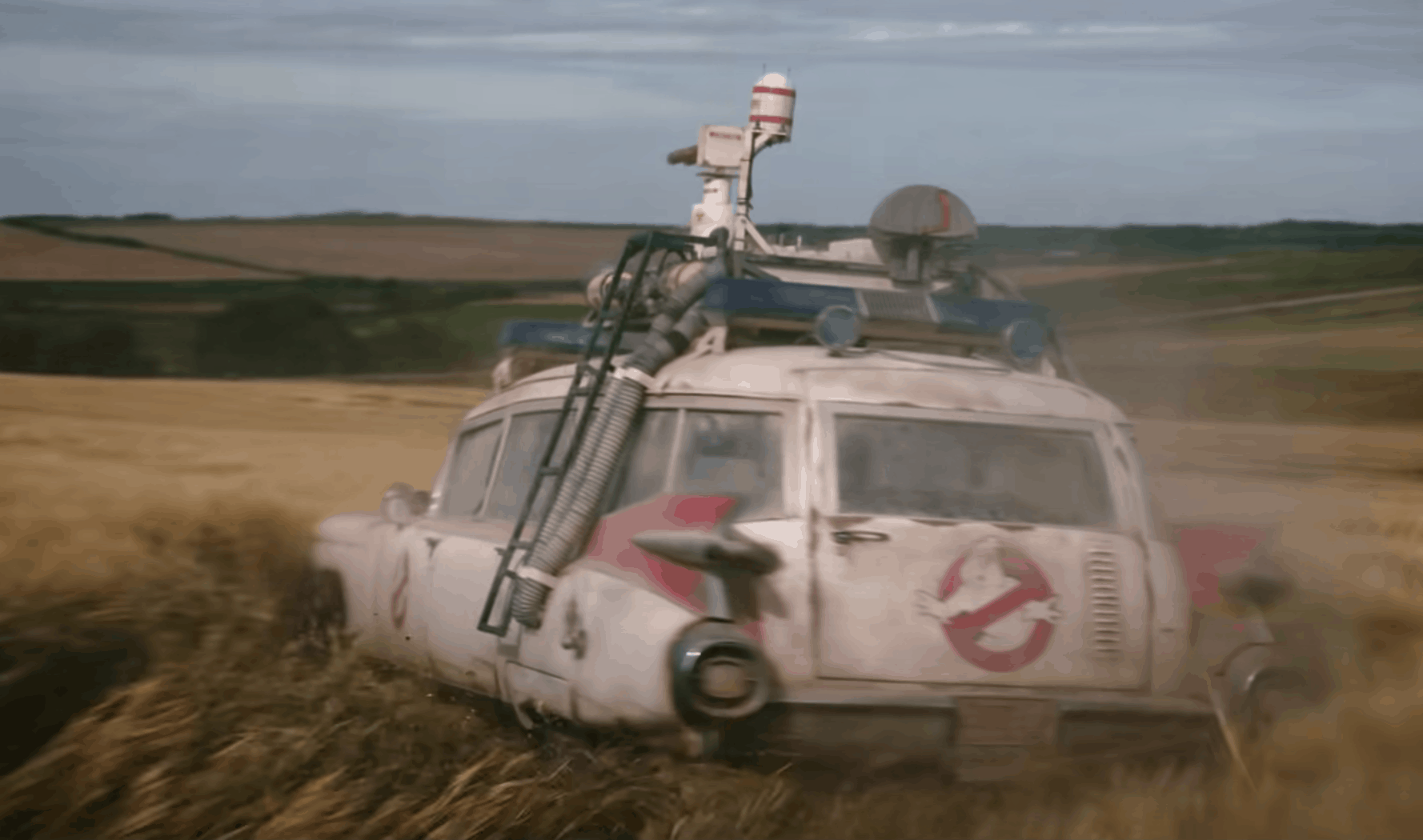 The Ecto-1 will definitely make an appearance in “Ghostbusters: Afterlife.” But don’t expect the same exact vehicle from the first movie. The crew purchased a different 1959 Cadillac model to convert into the lastest Ecto-1. They wanted to keep the original vehicle, which is currently in storage on the Sony Picture lot in Los Angeles, safe from harm.

This latest version of the Ecto-1 should be very similar to the original Ecto-1, just an older, dustier version. The new movie explores the forgotten history and legacy of the three original Ghostbusters. Part of this legacy is the Ecto-1. In the move, the family of Dr. Egon Spengler finds the car and uses it to help save their town from ghosts.

The Ecto-1 has become increasingly popular throughout the years. Fans have loved it in all its recreations. With its rising popularity, the Ectomobile has become a popular toy and collectible. Here are the top five Ecto-1 toys for you to enjoy while you’re waiting for the new movie to come out. 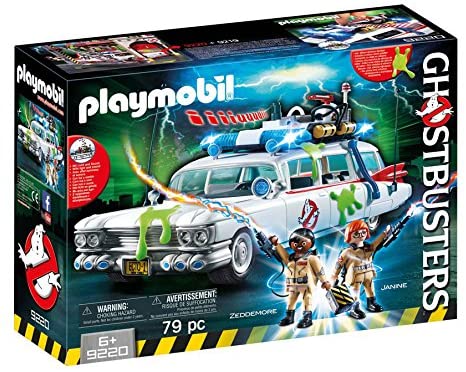 This set includes the Ectomobile, Ghostbusters Winston Zeddemore and Janine Melitz, two detachable proton packs and proton wands, a ghost trap, poke meter for measuring psychokinetic energy, and sticky silicone slime splatters. The vehicle has a detachable roof. The inside of the Ecto-1 has plenty of space to store the proton packs and ghost trap. 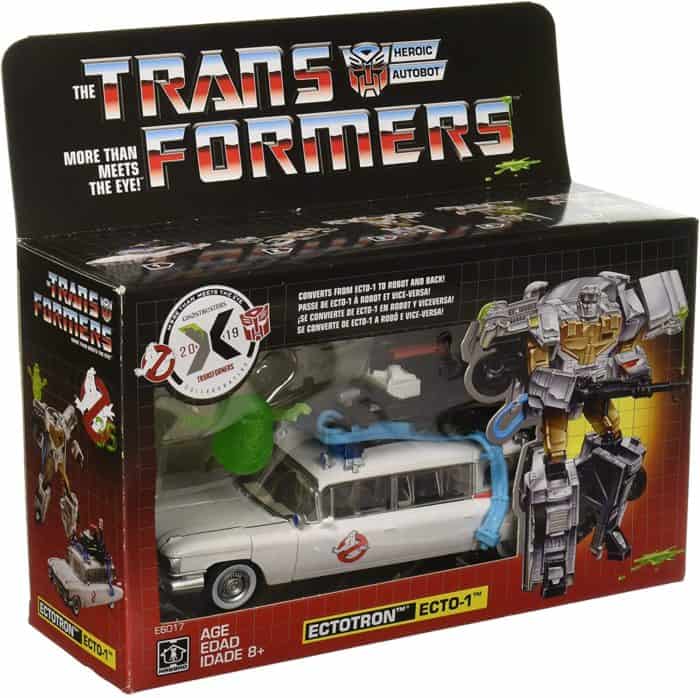 In this two-for-one toy, the Ecto-1 becomes a Transformer robot! The G1 style transformer changes easily and smoothly between Autobot and Ectomobile. And for added fun, the set comes with a green Slimer ghost so you can set up your own Ghostbusters showdown. This limited edition Ecto-1 Transformer is a great addition to any Ghostbuster’s collection. 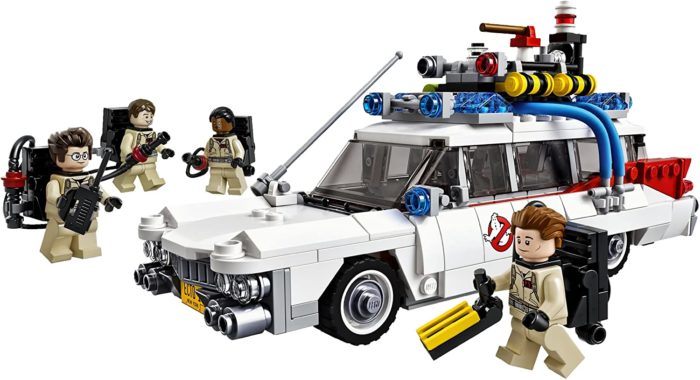 The Lego Ghostbuster Ecto-1 set is a great gift for any Ghostbuster fan. It includes 4 mini-figures of the original Ghostbusters —  Peter Venkman, Ray Stantz, Egon Spengler, and Winston Zeddemore —complete with proton packs. The Ecto-1 vehicle has several unique features and comes with an exclusive Ghostbuster booklet. The Ectomobile has the authentic Ghostbusters logo, paranormal detection equipment, a removable roof, tracking computer, and seats for 3 mini-figures. 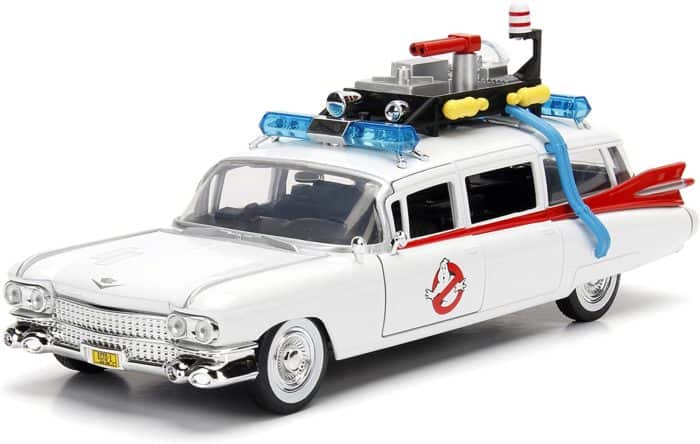 This collector’s edition of the Ecto-1 has amazing true-to-scale detail. It has rubber tires and detailed exterior. The doors, hood, and trunk all open and close. The car is made of diecast metal with some plastic parts. This authentic model would be an amazing addition to any Ghostbuster fan’s collection. 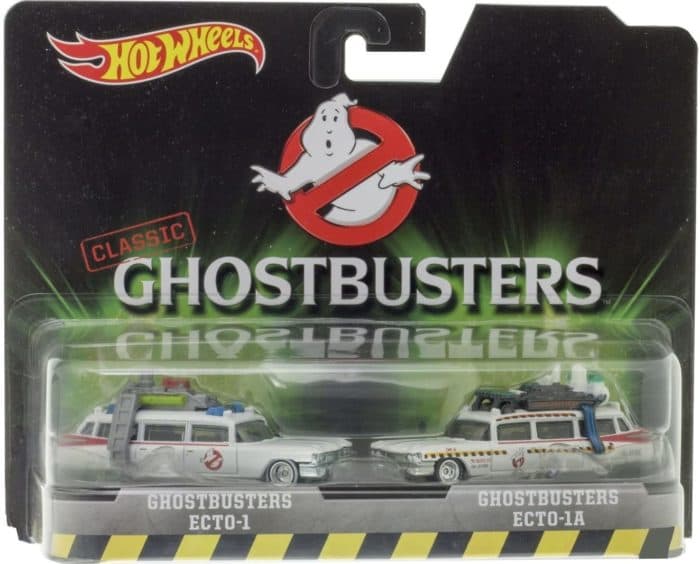 This Hot Wheels pack contains both the Ghostbusters Ecto-1 and Ecto-1A and is perfect for kids or adults who collect Hot Wheels or Ghostbuster merchandise. The vehicles are about 3.25 inches long and are die-cast metal. Adult collectors will love these officially licensed, limited-edition Hot Wheels cars.

Ecto-1 In The Media

The Ectomobile has been a popular part of the Ghostbusters franchise since day one. Even if you’ve never seen the movies, you likely can recognize this car. The vehicle is synonymous with Ghostbuster’s sounding call — “Who you gonna call? Ghostbusters!”

Over the years, the Ecto-1 has made various real-world appearances. In the 80s, the original car was driven around New York City several times — each time driven by one of the actors who played one of the original Ghostbusters. In 2016, look-a-like vehicles were used as Lyfts in New York City, San Francisco, Los Angeles, Boston, and Washington, D.C. Riders could use the Lyft app to upgrade to “Ghost Mode” for a spin in the Ectomobile.

And for the true die-hard fans, super fan Loren Baldwin spent two years building his own fully functional replica of Ecto-1 from a 1959 Miller-Meteor.

Look for the Ectomobile and company in theaters again March 2021.


15 Rare American Muscle Cars We Don't See On The Roads That ...
12 Iconic Honda JDM Cars
Everything You Need to Know About Speeding Tickets
Building a Dream In The Form Of A 700 HP 1969 Camaro
The 10 Most Powerful Chevy Muscle Car Big Blocks
10 Most Expensive Production Pickup Trucks

Haley is a writer, reader, and life long learner. She recently graduated from Brigham Young University and enjoys spending time with family and friends. In her free time, you can find her reading the latest book, discovering new hobbies, or running in the desert.