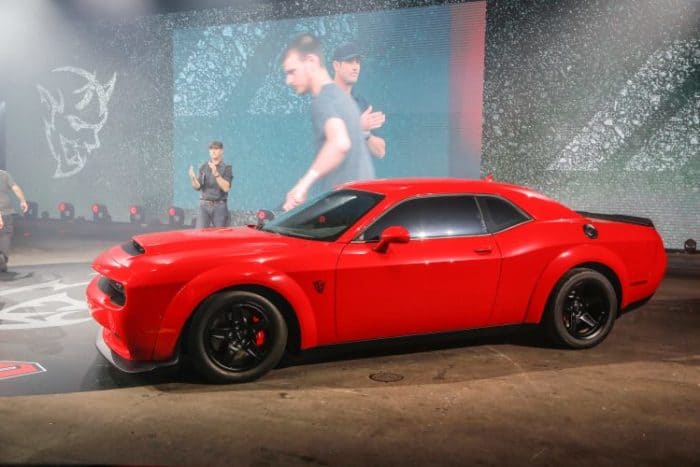 American cars often differed from their overseas 4-wheel counterparts. They were usually much larger which is a feat that mandated additional power. Things are still, more or less the same, but this strategy has had many ups and downs over the years. American muscle car reached its peak in late sixties and 1970 model year. Next decade and a half would be a roller coaster. A roller coaster towards the bottom. Malaise era hit the car world so hard that the industry would need more than thirty years to heal its wounds as first serial production non-supercars with at least 400 horsepower on tap only arrived after the millennium.

Needless to say, most powerful American production cars in history all hail from twenty tens. Not only has technology advanced to a certain level that allows 600+ horsepower cars, but the climate has been favorable as well. Of course, we’re only talking about factory production cars here. Callaway, Hennessey, Roush and co. will have to find another place to promote their majestically tuned beasts. Anyway, here are the top 10 most powerful domestic production cars ever made.

What Is The Highest Horsepower Production Car From The USA?

the Chevrolet Corvette ZR1 from a few years ago was one of the first American production non-supercars with more than 600 ponies on tap. For a short time, it sat atop the Corvette hierarchy, but got dethroned by C7 Corvette Z06 soon afterwards. Motivating factor behind the ZR1 was 6.2L LS9 V8 with Eaton TVS supercharger. A setup that raised a whopping 638 horsepower. Engine wasn’t Corvette ZR1’s only focal point, though. It also came with carbon-fiber body panels all over and largest wheels ever fitted to a ‘Vette. At least until then. One neat detail was a polycarbonate window donning the center hood and allowing intercooler to be seen through it. ZR1’s sticker delved deep into six digit territory but the car compensated with extreme performance. There’s also a new version coming in 2019 which should develop between 700 and 800 horsepower. 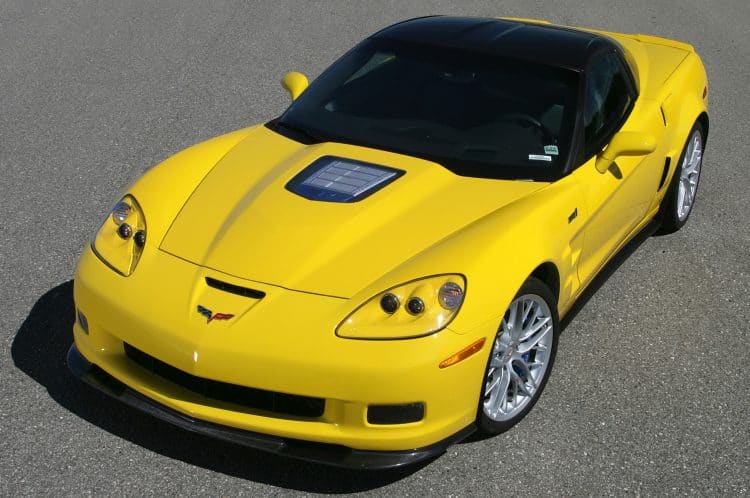 The V10 engine has always been the Dodge Viper’s focal point. One thing that bothers me, though, is the fact they needed 8.4L behemoth in order to achieve 640 horsepower and 600 lb-ft of torque. At least Mopar engineers kept it clean cut, naturally aspirated. Nevertheless, Vipers were always there, among the select company of coolest American cars. Because, let’s face it – a car that’s constantly trying to kill you has to be considered cool. Dodge Viper TA (Time Attack) debuted in 2013, but remained in circulation until the sports car’s demise. Parallel to TA models, from 2015 onward, Dodge also offered TA 2.0 models with updated aero package and improved downforce. Although TA handled better than conventional Vipers, its top speed was reduced to 193 mph. Meanwhile, 2.0 versions kept the top speed of 206 mph and also managed to slightly improve on fuel economy. 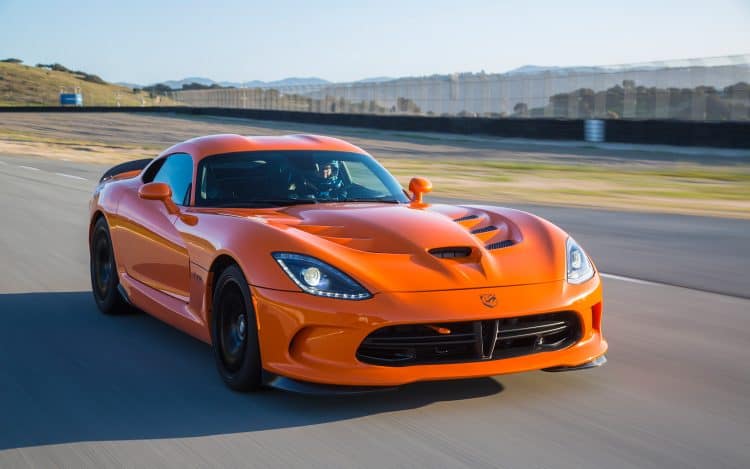 This high-performance version of the luxury 4-door Cadillac CTS sedan churns out 640 horsepower as of 2016 model year. A feat that’s courtesy of 6.2L supercharged LT4 small-block V8 engine also found in top tier Camaro and Corvette models (more on these later). For now, it’s the only Cadillac capable of making 600+ ponies. A state we believe will change in years that follow. Well, Cadillac brass wanted to debunk the myth that Caddy’s only appeal to older population. What better way to scare the old folks than to stick the most powerful available small-block V8 in their car?! Anyway, for close to $90,000 you get a plushy lightning rod of a car that doesn’t joke around. 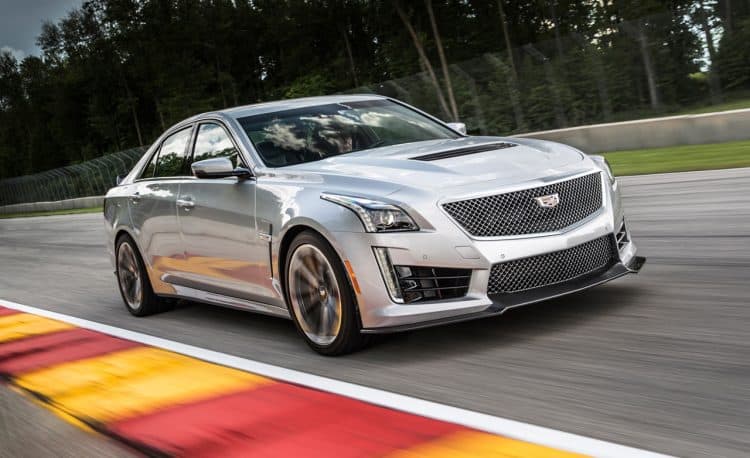 Although the Viper’s now gone, at least it bowed and left the stage in a proper way. Dodge offered no less than five final editions which got snapped up in five days. Had FCA managed to sell 40 Vipers per day on a regular basis like these special editions, Viper would still be here. All five models came with 645 horsepower and 600 lb-ft of torque which was the maximum amount of power sports car that saved Chrysler at one point managed to achieve. Although they don’t really differ from the rest of the conventional lineup, besides their unique paint and badging, it’s safe to assume these 206 25th anniversary edition models will one day drive much higher stickers than their siblings. 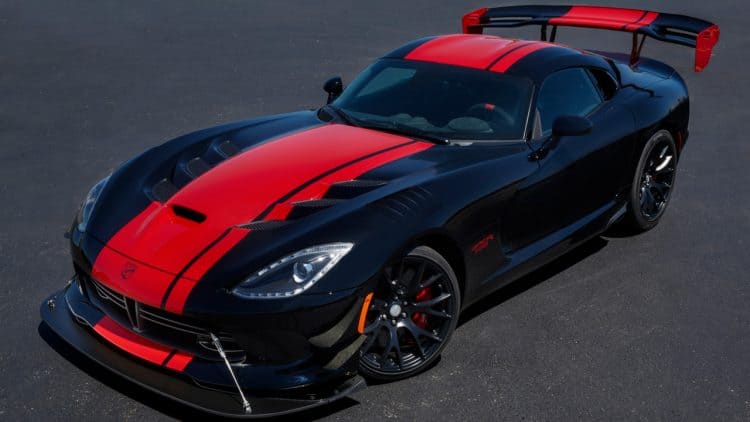 With big shoes of its iconic Ferrari fighting and four time 24 Hours of Le Mans winner GT40 to fill, the new Ford GT has had its work cut out for him. Nevertheless, 2017 Ford GT duly delivered. It’s got 647 horsepower and 550 pound-feet of twist and it’s assembled out of 250 carbon-fiber pieces. What’s even more striking is the fact that Ford Performance managed to squeeze all that power out of 3.5L V6 mill. Twin-turbocharged, though, but still on the small side. Without any doubt, Ford GT will earn its place among the coolest and most advanced American cars of its generation. Just like its predecessors have done before him. 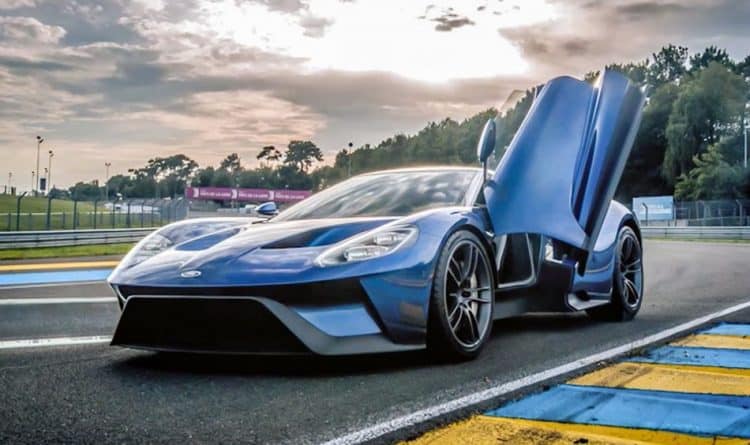 Both of these Bow Tie brand’s icons pack the same amount of heat via the same supercharged LT4 engine that also motivates the aforementioned Cadillac CTS-V. Unlike the Caddy, Chevy’s allow 6.2L V8 mill to develop its full potential. That is to say 650 horsepower and 650 lb-ft of torque. Not only are they extremely powerful, and as you can imagine, lightning quick (0 to 60 in 3.3 and 3.7 seconds respectively) – but can also bend corners to their will. Corvette Z06 and Camaro ZL1 are Chevrolet’s performance machines for the future. Although, knowing Chevy’s performance division, they’ll soon draw up something even more crazy.

Shelby Mustang has been absent since 2014 and it’s already being missed. Sure, GT350 is a superb car, but that GT500 moniker simply doesn’t go hand in hand with the retirement in my opinion. I can name plethora of reasons to defend that statement. Last GT500 itself could name you at least 662 reasons. Incidentally, that’s exactly how many horsepower that muscle car has had. Unlike the current GT350 models which rely on normal aspiration, GT500 from a few years ago found its spark in 5.8L supercharged V8 mill. But we won’t hold that against it. After all, it’s the most powerful factory-built Mustang ever produced. Question is, for how long? 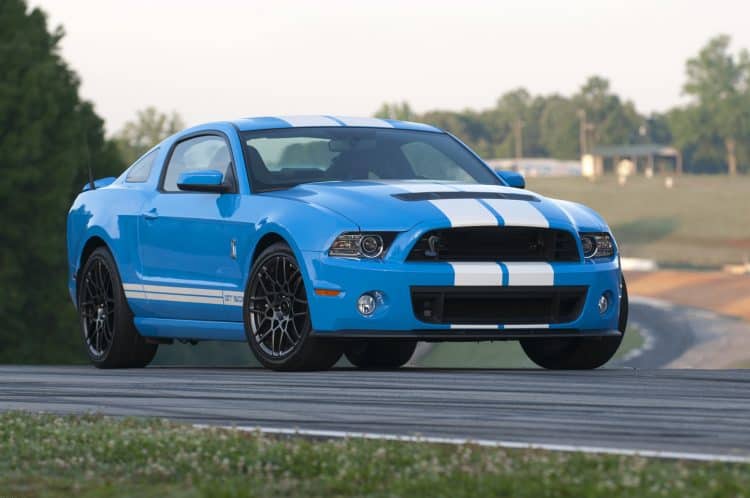 Dodge’s dynamic duo which, until recently, was sitting upon the American production cars throne – only recently got dethroned by another in-house car craziness. For what they had endured over the years, though, both Challenger and Charger deserved the laurels which they proudly wore for three years. Their 6.2L Hemi V8 Hellcat engine is tuned to a heavy metal powersong of 707 ponies and 650 lb-ft of torque. They’re both capable of clocking around 200 mph and accelerating to 60 from standstill in around 3.5 seconds. Remarkable feat considering both coupe and sedan are consigned to rear-wheel drive.

Hellcat madness doesn’t stop with the Challenger and Charger. No siree! The Jeep Grand Cherokee has got the engine now, of all vehicles. That practically made it the most powerful production SUV in the world, and I doubt even the upcoming luxury SUVs from Lamborghini and Rolls Royce will be able to top its 707 horsepower. $230,000 Bentley Bentayga certainly doesn’t, being short some 107 ponies or so. Compared to Dodge’s aforementioned dynamic duo, Grand Cherokee Trackhawk comes short in torque department. It lacks 5 lb-ft since its total equals 645 lb-ft. On the other hand, it does benefit from much needed all-wheel drive system which’ll likely enable the SUV to utilize more of its potential. 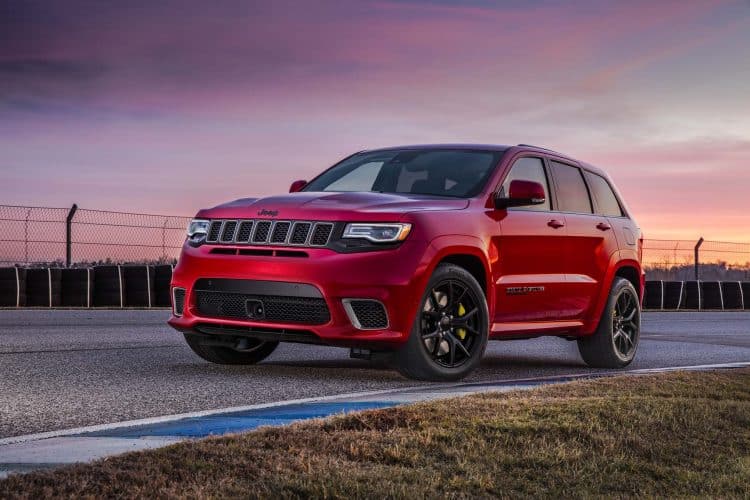 The latest in the long run of ludicrous Dodges. The most powerful production non-supercar ever built. Definitely the most powerful American production car ever. All hail the Demon. Thanks to its supercharged 6.2L Hemi V8 mill, this drag king generates 808 horsepower and 717 lb-ft of torque. But wait! Run it on 100 octane gasoline and see it transformed into 840-hp beast with 770 pound-feet of twist. Figures that are good for 0 to 60 time of less than 2.5 seconds. Also, Demon will run quarter mile in less than 10 seconds, but it’ll only max out at 170 mph or so. 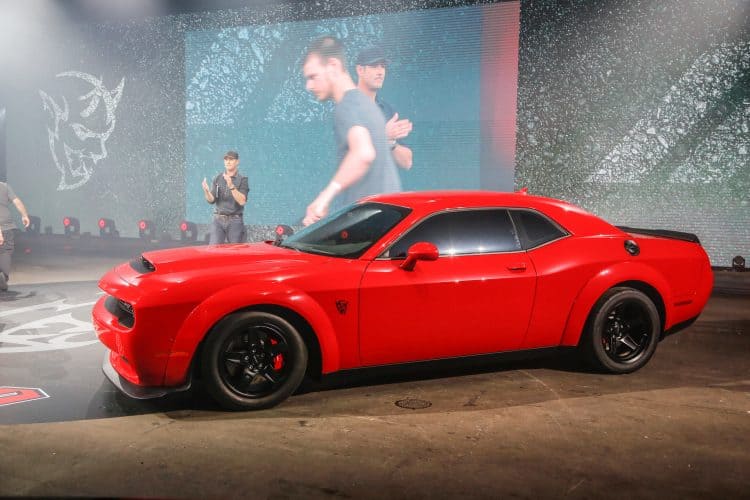 C2 and C3 Chevrolet Corvettes with rare L88 options are still considered the holy grail among ‘Vette aficionados. They were intended as track only cars so Zora Arkus Duntov himself came to a plan on how to discourage general population from buying them. He proposed extremely downgraded factory ratings of 430 ponies. Mind you, that was still a huge figure for late sixties. In truth, L88 generated anything between 540 hp and 580 hp. Most people agree it delivered 560 ponies at 6,400 rpm. Due to extremely high compression ratio, it also required 103-octane racing fuel. I’m mentioning the L88 ‘Vette because it was the peak of American performance scene from the late sixties. 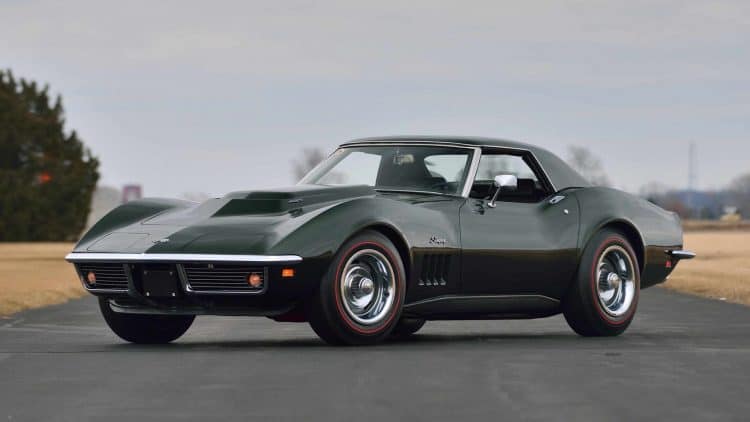 Equus Bass appears among honorable mentions because it’s not a serial production vehicle. This luxury muscle car that costs north of $250,000 uses GM’s 6.2L supercharged LS9 V8 powerplant for motivation. Engine taken out of above mentioned Corvette ZR1, if you’ll remember. It can apparently max out at 200 mph and hit 60 mph from standstill in just 3.4 seconds. Mix of modern underpinnings and powertrain, and old school muscle car design is always a welcome addition to the scene. It’s just the sticker that ruins it. 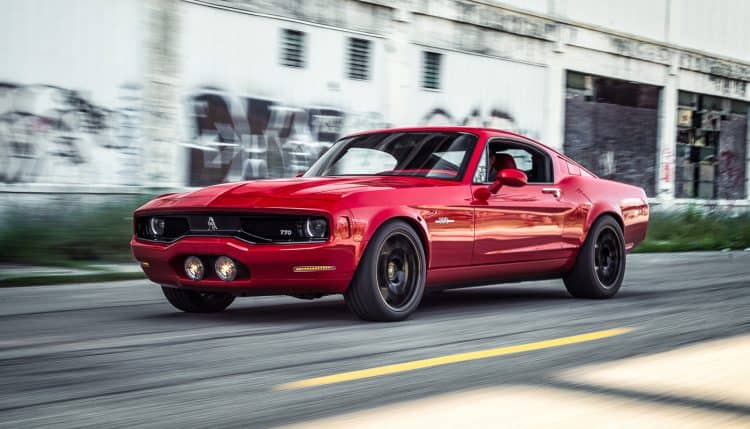 One of the most powerful American supercars debuted in 2000 with Ford’s 7.0L naturally aspirated V8 making 550 horsepower. But it wasn’t until Irvine-based company decided to stick two Garrett turbochargers on it that Saleen S7 finally reached its peak. With 750 ponies, S7 Twin-Turbo would have taken respectable second spot on this list. However, only around 20 of these were made, so S7 Twin-Turbo wasn’t actually a mass production vehicle. 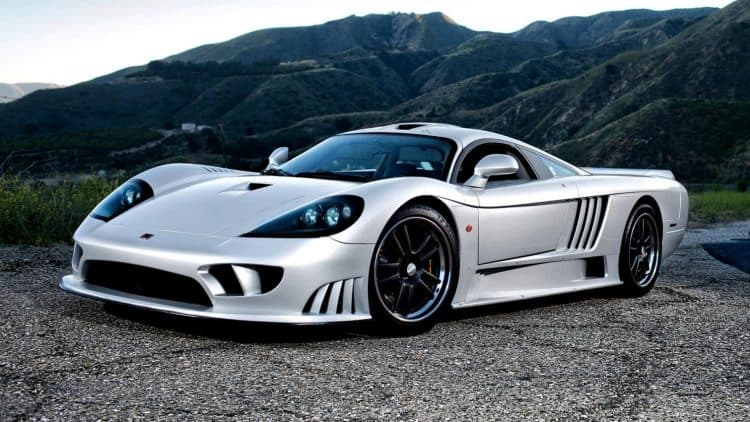 The Tesla Model S P100D with Ludicrous Mode also quotes high among the most powerful American cars ever produced. It’s also a production vehicle, so why didn’t we list it second? Well, although its electric motors develop a total of 762 ponies, final net output isn’t that high. This figure merely reflects stacked power of all the car’s subsystems. This doesn’t mean Tesla Model S isn’t any fast, though. P100D with Ludicrous Mode accelerates to 60 mph in 2.4 seconds, making it almost as quick as the Demon. 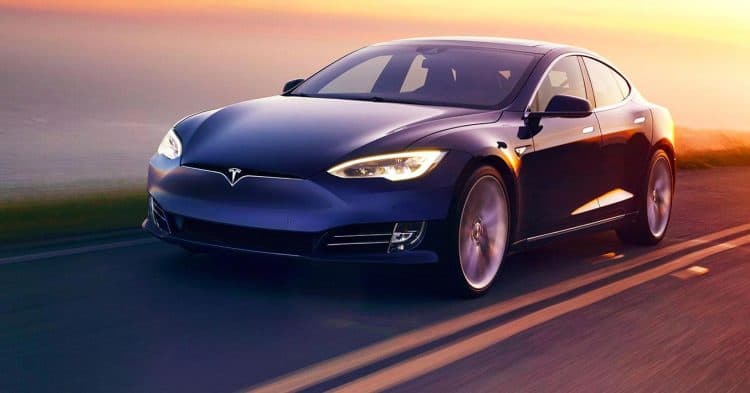 Shame it was never a full production vehicle, for Hennessey Performance’s Venom GT stood shoulder to shoulder with the most powerful Bugatti’s and Koenigsegg’s. Its 7.0L twin-turbo LSX V8 developed a maximum of 1,244 ponies until 2015 when Venom GT Spyder made its debut. Convertible gained 207 ponies more for grand total of otherworldly 1,451 horsepower. It even reached the top speed of 265.6 mph. Definitely the most powerful and fastest, shall we say, semi-production American car ever. Thing is, they were also worth close to $1 million with final edition model selling for record $1.2 million. 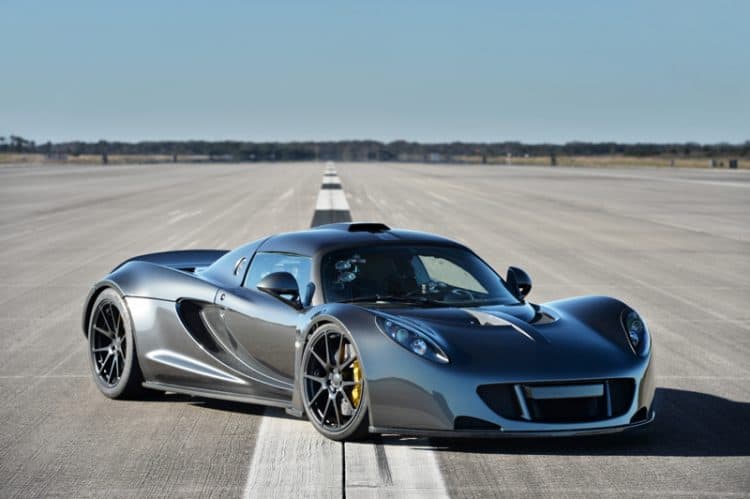