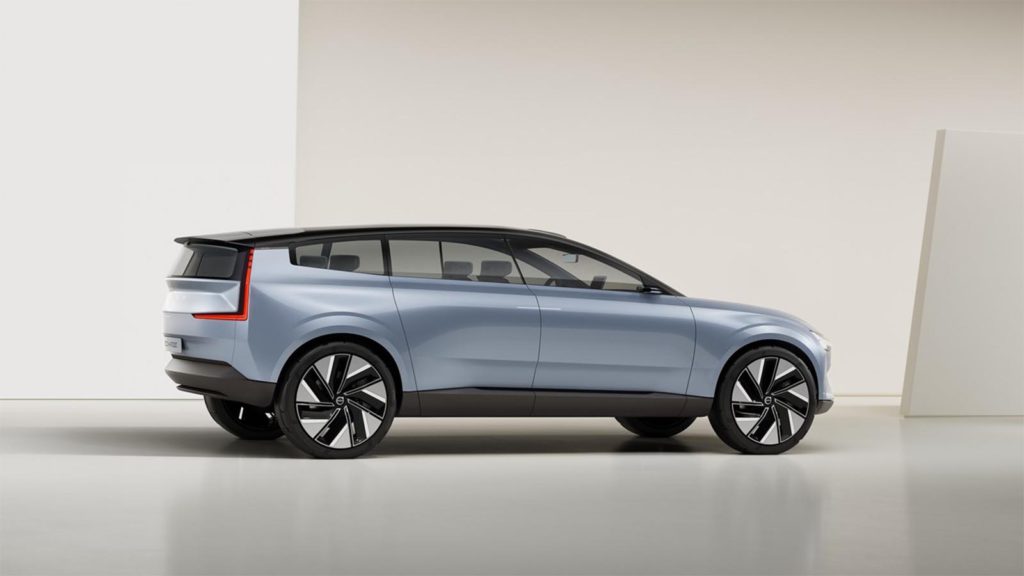 Volvo is going all-electric, and the new Volvo Concept Recharge offers the first inside look at what that’s likely to mean.

The battery-powered prototype introduces an entirely new design language and a new skateboard-style architecture that will be shared with a wide range of future products and a completely new electronic control system that, Volvo claims, will offer true autonomous driving capabilities.

“Our Concept Recharge represents a manifesto for the all-electric future of Volvo Cars, as well as a new type of vehicle,” said Robin Page, Head of Design at Volvo Cars. “It displays new and modern proportions that go hand in hand with increased versatility and shows what technology can enable in terms of design.” 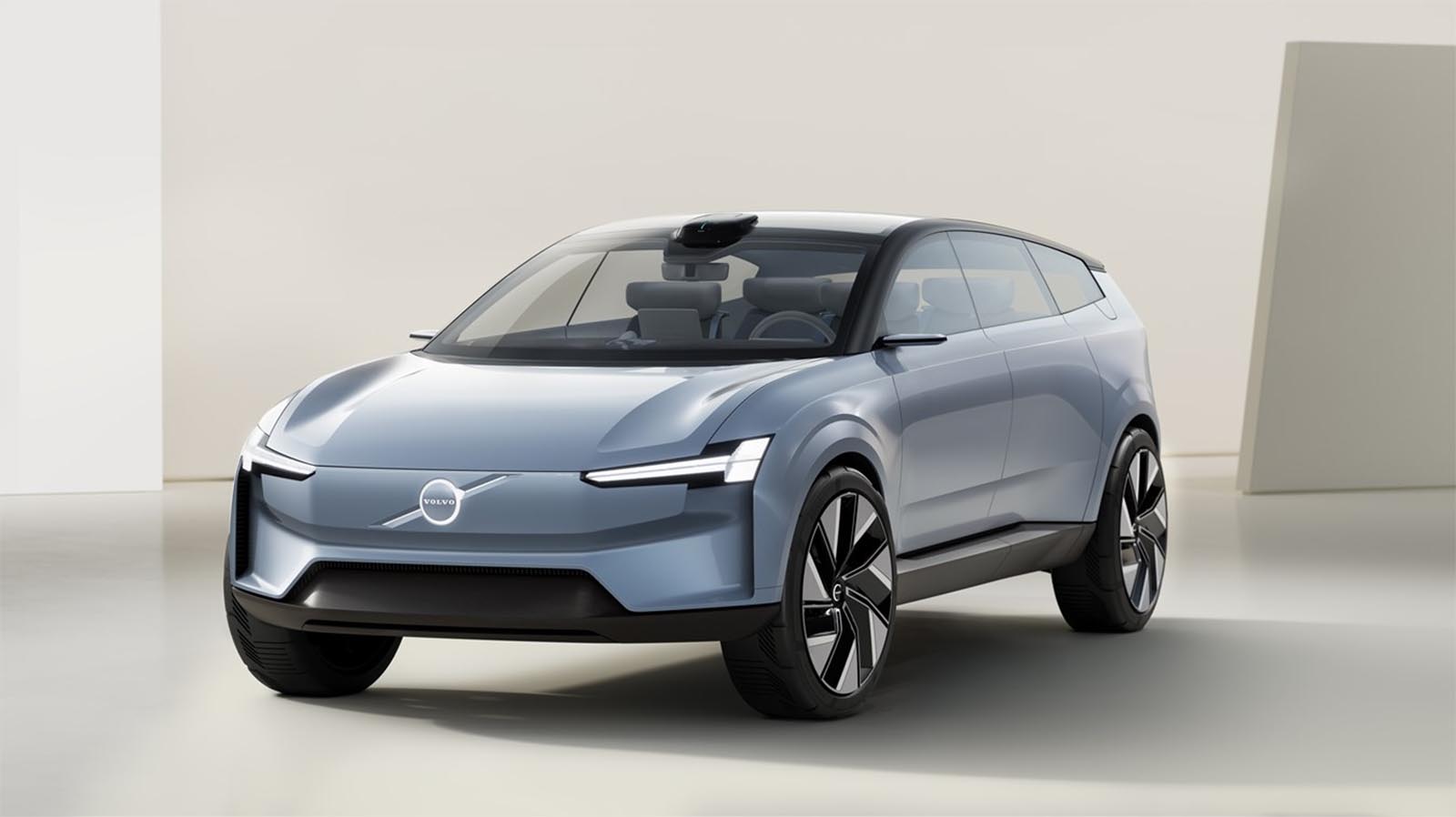 Last March, the Swedish automaker announced plans to go 100% electric by 2030, phasing out not only its internal combustion models but also those using plug-in hybrid technology. Its first long-range battery electric vehicle (BEV), the XC40 Recharge, recently went on sale. Volvo confirmed plans for several more, including the C40 Recharge and an all-electric version of the flagship XC40. Last month Volvo announced that their South Carolina plant would be converted to produce battery models exclusively.

The switch to battery power promises to give industry designers and engineers far more flexibility than they have today – in part because of the shift to those skateboard-like “architectures.” By mounting batteries, engines and other powertrain components below the load floor, there’s no longer a need for an engine compartment upfront. 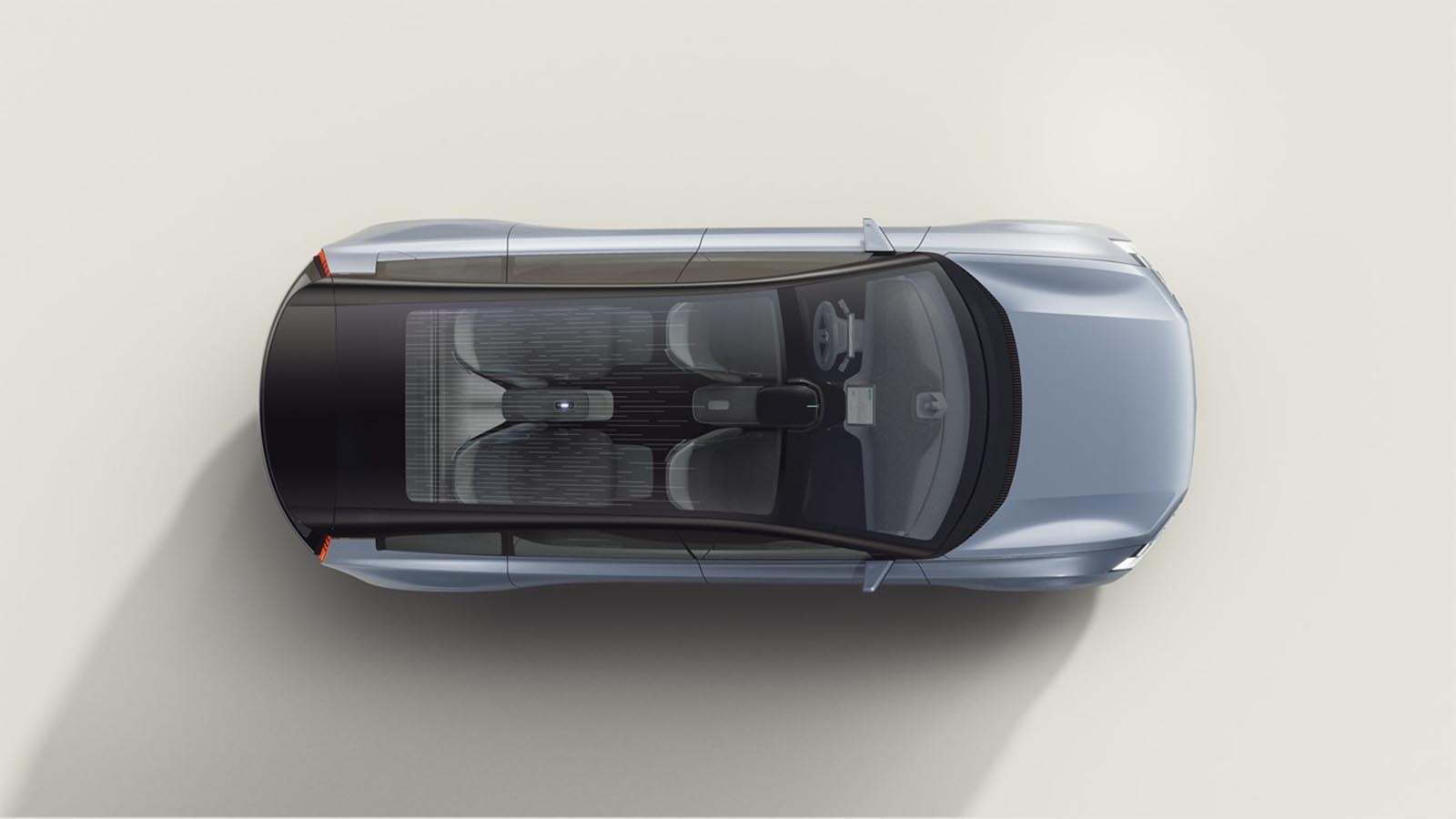 With the Concept Recharge, Volvo stretches out the wheelbase, moves the wheels right out to the corners and takes some of the space back to yield a bigger passenger compartment.

The overall design falls somewhere between a wagon and an SUV, and it does pick up on some familiar styling cues, such as Volvo’s Thor’s Hammer headlights and vertical tail lamps. But even these undergo dramatic changes in the BEV’s design, proportion – and technology. The “handle” of the headlights functions a bit like eyelids, opening up to reveal additional LED elements at night. The taillights, meanwhile, extend rearward at highway speeds to improve the show car’s aerodynamics.

With far less need for air when using electric motors, Volvo stylists opted for a relatively flat and sealed front “grille,” with a backlit version of the familiar Volvo “iron mark” logo. Vertical slits at the Concept’s front corners primarily serve aerodynamic duties, creating a smoother airflow around the wheels.

The Volvo Concept Recharge was designed from the ground up as a battery-electric vehicle. Among the other benefits, there’s a flat load floor minimizing intrusion into a cabin featuring massive amounts of leg, shoulder and headroom. And occupants get a commanding view of the world around, the cabin almost entirely surrounded by glass, including the transparent roof. 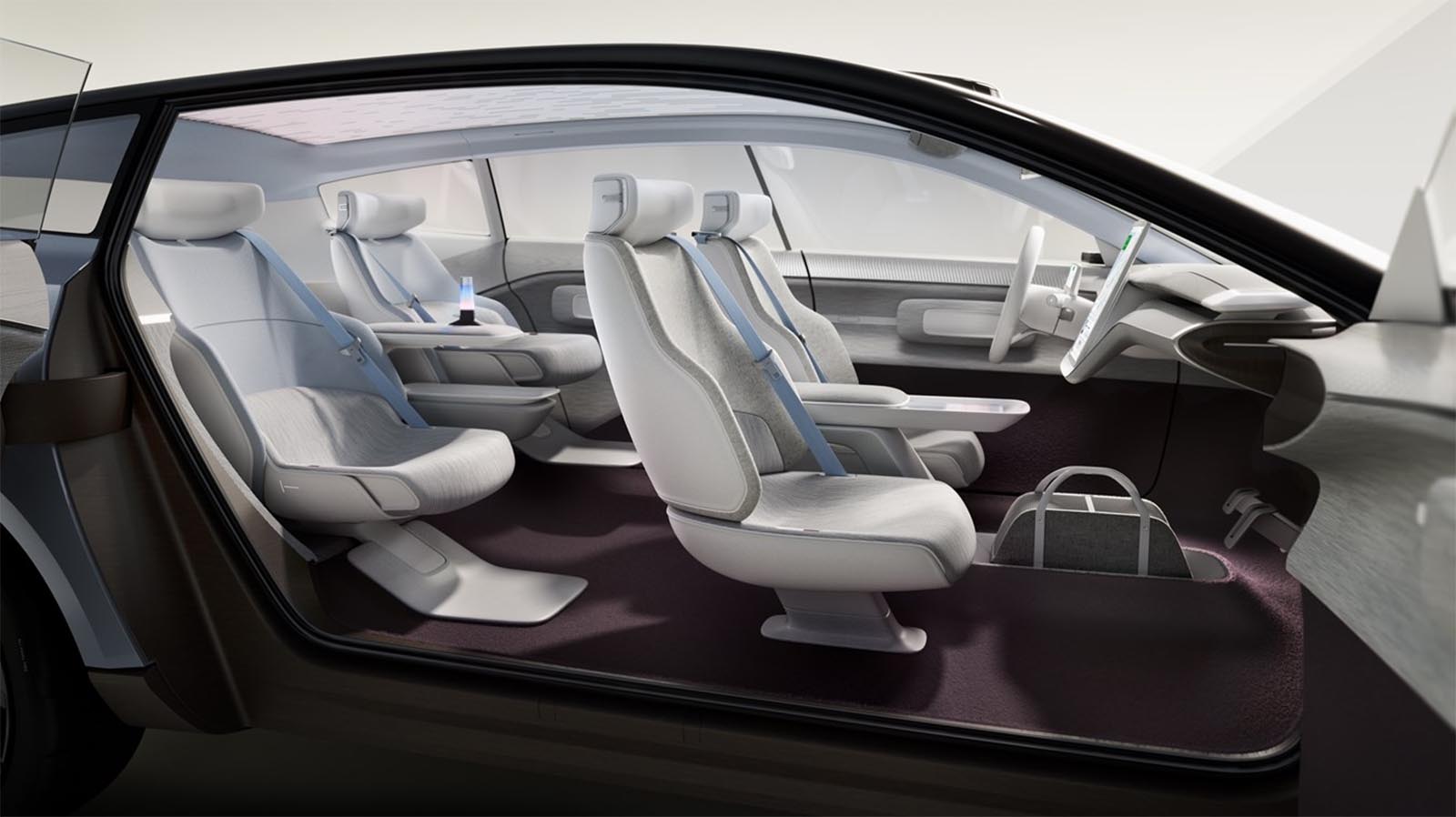 The layout and design take the carmaker’s traditionally Swedish-minimalist approach to a new level, “continuing the theme of ‘less is better,” it said in a statement. “All unnecessary elements,” it added, “have been removed, and what remains is treated with a high-precision, flush execution.”

The BEV’s four buckets have a retro-futuristic look, like a Swedish take on the classic Eames chair. The center console floats between the two front seats, with a large storage area beneath. There are virtually no traditional controls, knobs or buttons, all replaced by a 15-inch, vertically oriented touchscreen. A similar console in the back can fold open if room is needed for a fifth passenger.

“Inside the Concept Recharge, we create a truly Scandinavian living room feeling,” said Robin Page. “The interior integrates our latest user experience technology with beautiful, sustainable and natural materials. Each part of the interior is like a piece of art and could stand alone as individual furniture in a room. We use the latest technologies but not for their own sake. We always focus on the benefits that technologies can bring.” 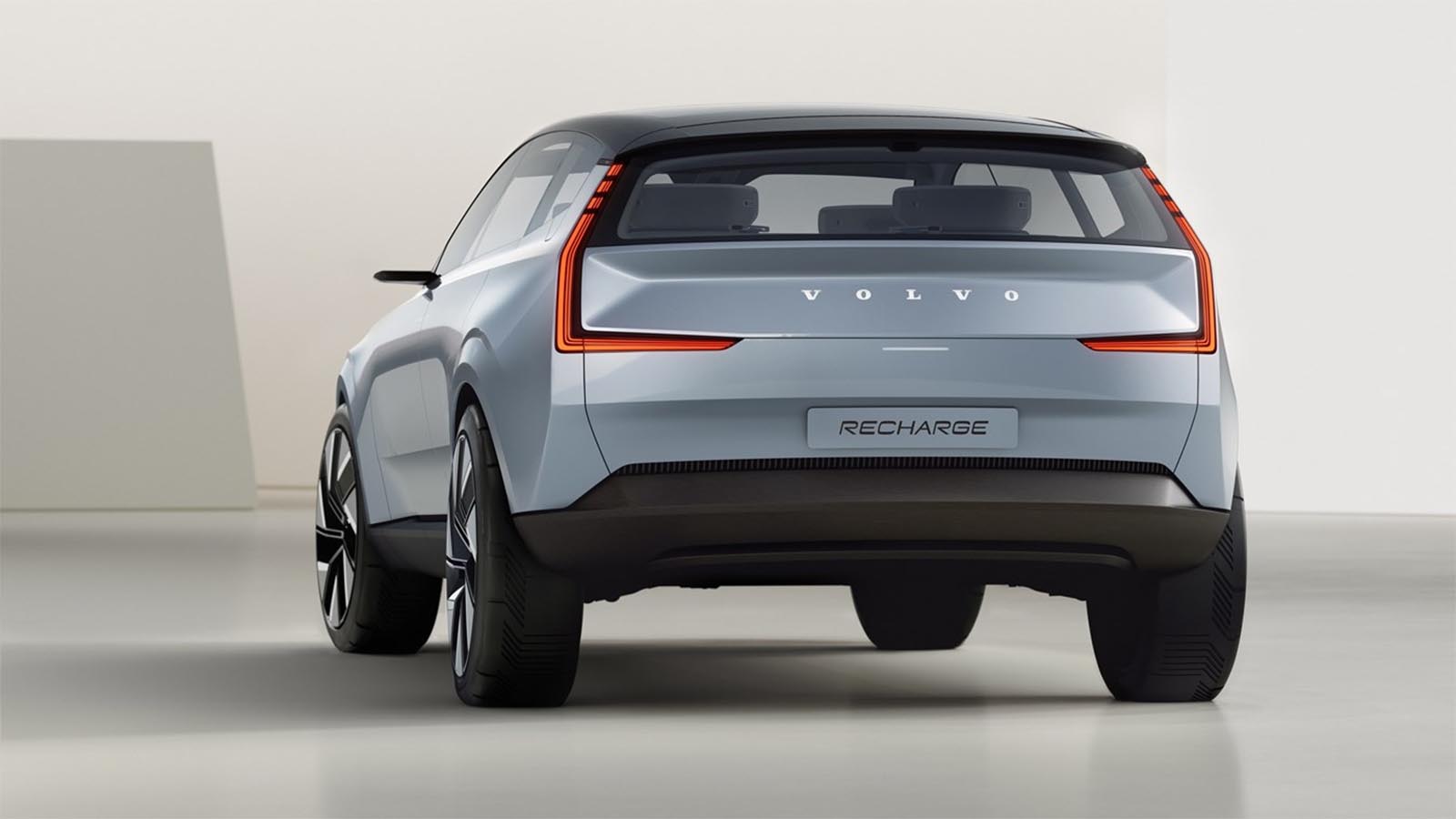 Volvo isn’t saying much about the Concept Recharge drivetrain, but it’s said that it wants to enhance the technology offered in the new XC40. That electric crossover pairs two motors, one on each axle, to produce 402 horsepower. But what might be the more important figure is the 486 pound-feet of torque. With a single-speed transmission, power comes on all but instantaneously. Torque is equally split between front and rear, creating a through-the-road all-wheel-drive system.

But it delivers only a modest 208 miles range out of its 75-kilowatt-hour battery. Boosting range and speeding up charging are two of Volvo’s top priorities and company officials emphasized during a “Tech Day” presentation this week. That’s one reason the automaker recently formed a partnership with Northvolt to bring a new form of lithium-ion battery technology into play. 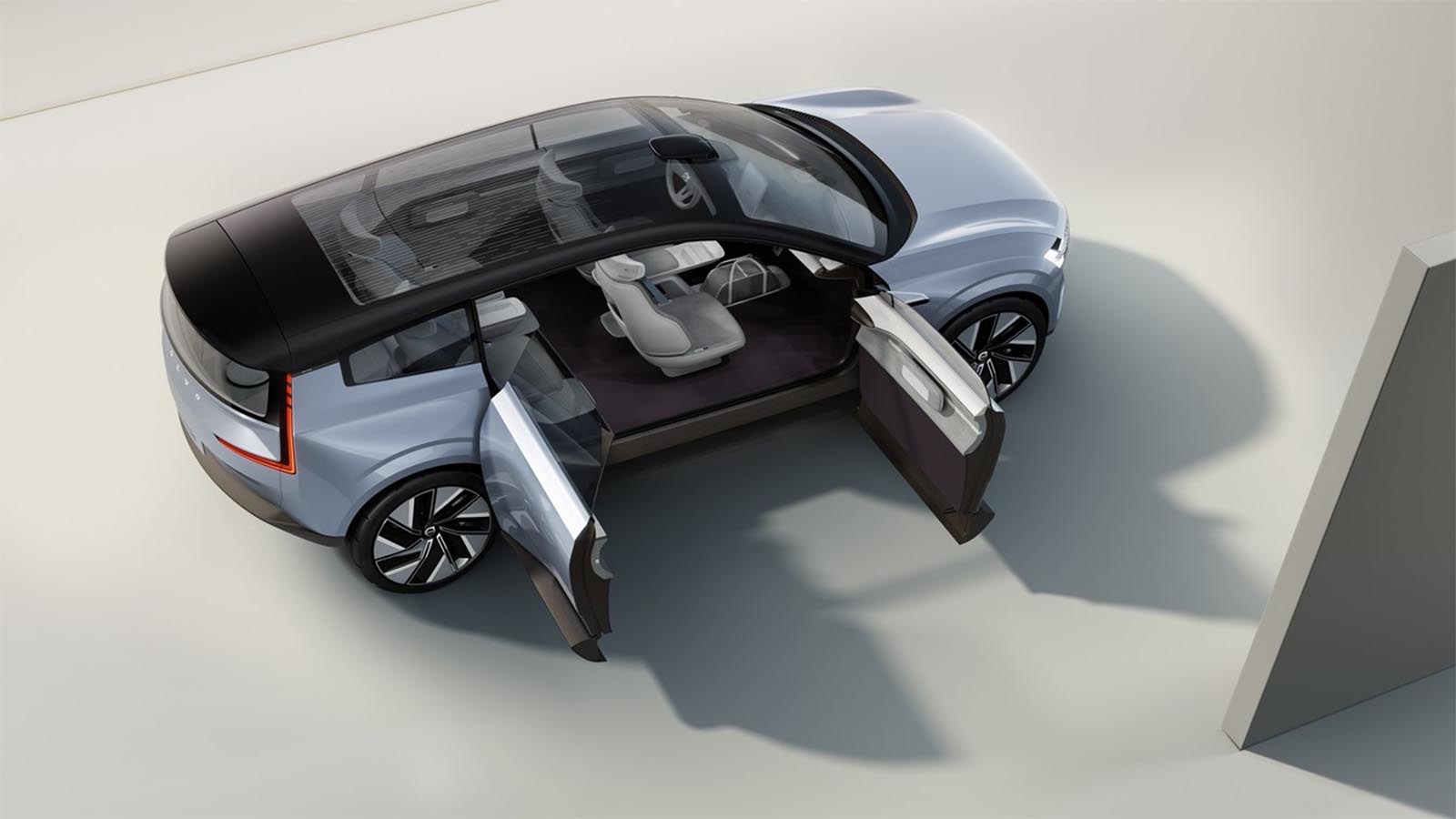 Volvo was more forthcoming when talking about other aspects of the Volvo Recharge technology. That includes a new operating system, or OS, that will replace its current, oft-criticized technology. Dubbed VolvoCars OS, it will act as an “umbrella system” linking the various digital systems onboard. The new OS will manage two distinctive computer cores, one overseeing vehicle operations, the other focusing on safety systems and ride management. The goal is to meld these into one central core in the future.

One of the big developments is Volvo’s new advanced driver assistance system. It will let motorists operate hands-free on designated roadways, the company said. But it will go beyond what Tesla’s Autopilot and General Motors’ Super Cruise can manage today, no longer requiring motorists to constantly be at the ready to take over control.

To make that possible, future products will use Light Detection and Ranging (LIDAR) and other camera and radar-based sensors. The automaker said late last month that it is preparing to make LIDAR a standard feature on future products.

Most of the technology in the Volvo Concept Recharge appears destined for production in the next few years. As for the show car itself, the overall design language – save for the impractical “suicide doors” will reappear, to some degree, once Volvo’s new electric vehicle architecture is ready for production.