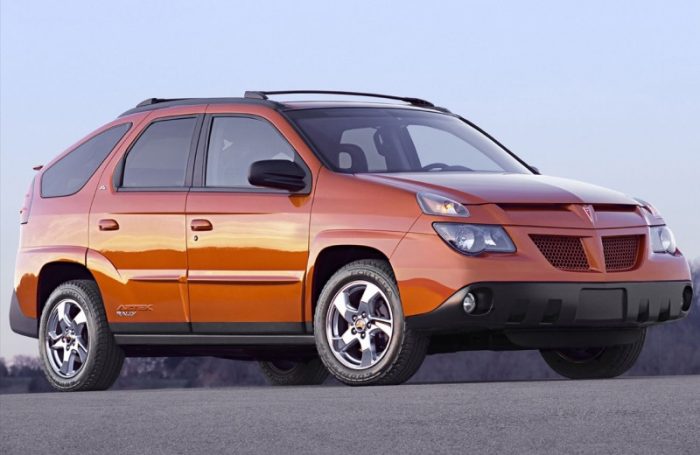 There have been a lot of ugly and just plain stupid ideas for cars over the past hundred years or so. And they all belong in the What The @?#&! Were They Thinking category. But as far as recent catastrophes on wheels we simply have to start with the Pontiac Aztek. 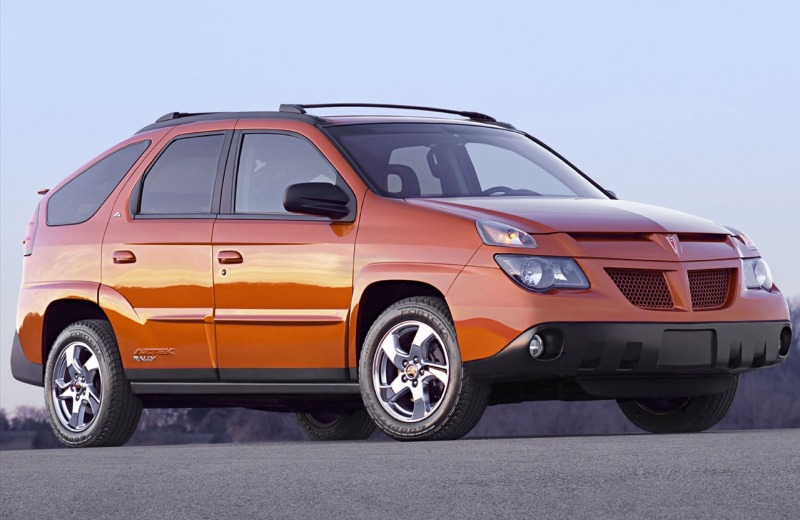 Somehow this car went from horribly ugly and awkward conceptual drawings to an even uglier concept vehicle. It was unveiled in 1999 and its been said, though I can’t verify this anywhere, that the Aztek received decent reviews. The car was officially launched in 2000, debuting on the reality show Survivor with the tag line ‘Quite possibly the most versatile vehicle on the planet’, if you can believe that. More like the most ugly vehicle on the planet.

Pontiac had such grand ideas for the Aztek. It was to be the ultimate party and adventure vehicle. It boasted massive cargo space, a pull out cargo tray with its own wheels for removal from the car that held up to 400 pounds, a cargo net system that could be configured 22 different ways and held up to 200 pounds. It came with a Heads Up Display. It had a built in cooler, air mattress and tent and its own air pump. It had rack mounts for everything you could imagine and a 10 speaker Pioneer stereo system in the back with rear controls for the ultimate tailgate party. 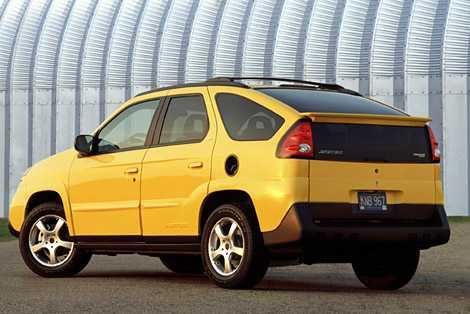 There was so much promise with the Pontiac Aztek it was mind boggling. And then they made it the most ugly monstrosity you’ve ever had the displeasure to lay eyes on. It’s like the design team spent their entire load on the interior concept that when it came to the exterior they were spent. The Aztek looks as if there was one design team responsible for the body below the window line and another for above it and the two teams never communicated. It has been considered the ugliest car of all time on several occasions and the overall worst vehicle as well. Not only for the terrible design but also because of the fact that the Aztek is considered the silver bullet that ultimately crippled Pontiac. The Pontiac Aztek was actually used for several derisive references in a book about software design called Code Complete by Steve MacConnell. It is considered the very embodiment of every mistake a designer can make. How even the best of ideas can be destroyed by poor execution.

The only way the Pontiac Aztek could be considered remotely cool is its enduring presence on the series Breaking Bad. It’s driven throughout most of the series with a broken windshield as the main protagonists ride and manages to last most of the series before finally being sold for a few hundred dollars. It was suitable Walter White drove the Pontiac Aztek as the car symbolized under achievement and poor decision making, much like White’s character. I always thought that Aztek of Walter White would have a dramatic and memorable final scene, like burning in the remote desert of New Mexico, or riddled with bullets in the street. But, much like the model itself, the Aztek sadly just faded away. 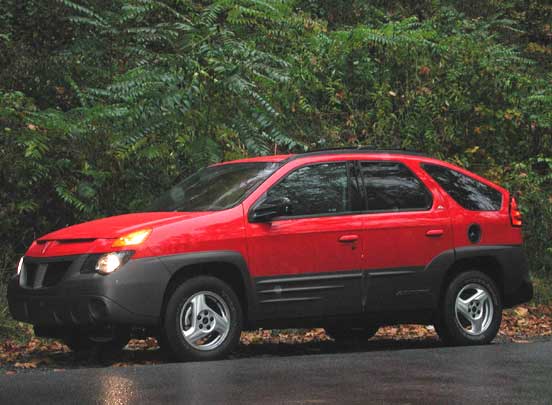 Hopefully lessons were learnt. Pontiac actually redeemed themselves a few years later with the Solstice. But unfortunately it wasn’t enough to pull their ass from the fire and GM took Pontiac out behind the shed and put a bullet in its head.


Who Drives The 10 Most Bad-Ass Trophy Trucks?
The Most Exciting 1966 Cars And Tech That Revolutionized Dri...
2021 Honda Civic Type R Review: One Last Dance With The Quee...
The Top 10 Best Used Minivans
GMA T.33: $2Million High Reving V12 Supercar From the Guy Wh...
NBA Stars And Their Muscle Cars