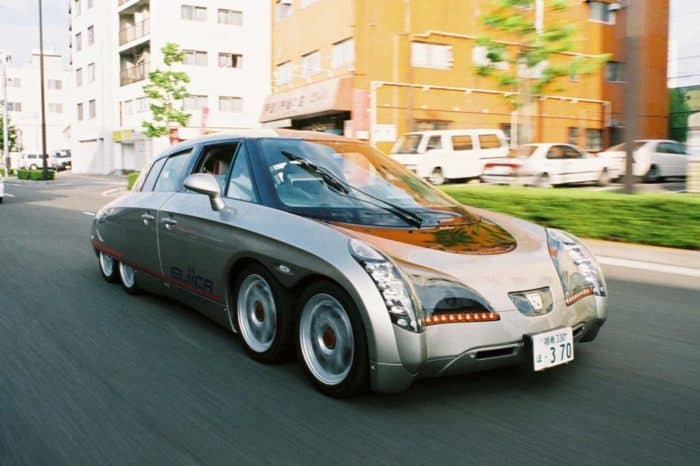 Growing up in England in the late 1970s, our family car was a three-wheeled Reliant Supervan. While the cramped, spartan interior and daily jibes were no fun, that turquoise runt of a ride at least demonstrated that odd-wheel-configuration cars really can be viable daily drivers.

Here are cars with three, six, eight, and even no wheels that you just might – one day, at least – see on the road. 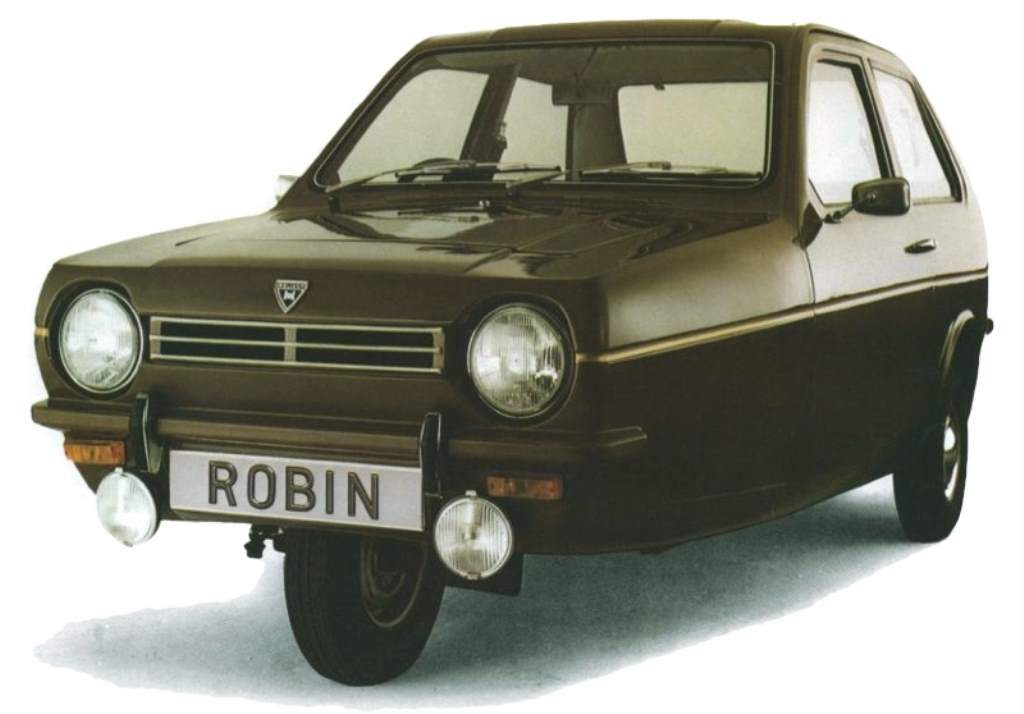 England’s defunct Reliant automaker had a thing for two-at-the-back three-wheelers. In 1953 it launched the two-door Regal, the fiberglass Supervan version of which is immortalized in British culture by its recurring role in BBC sitcom Only Fools and Horses (and briefer appearances in Mr. Bean). Brilliantly coinciding with the 1973 OPEC oil embargo, Reliant’s better-looking, 70-mpg Robin was a hit, being produced in various forms for 30 years. Reliant owner’s manuals actually encouraged waving at fellow three-wheeler drivers, as if to offset the incredulous pointing and laughter from most other motorists. 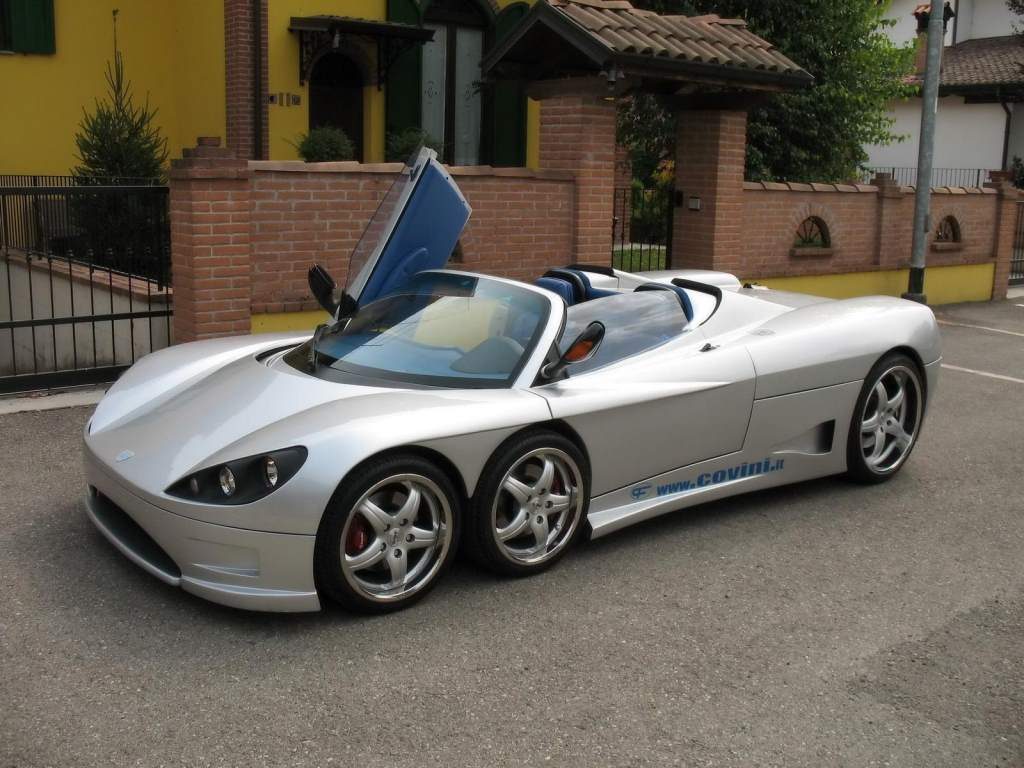 Originally inspired by the six-wheeled, Grand Prix-winning Tyrrell P34 of the mid 1970s, Italy’s Covini C6W languished on drawing boards for decades before a prototype appeared in 2004. The following year the 2-seater coupe actually tottered into production, albeit of just 6-8 cars annually. With its rear-mounted Audi V8 the C6W can hit 186 mph, guided (like the P34) by four somewhat shrunken, steerable front wheels. Looking like a Photoshopped ‘90s poster car, the scissor-doored C6W is large yet lightweight, thanks to its carbon fiber body. The first, and surely last, six-wheeled supercar. 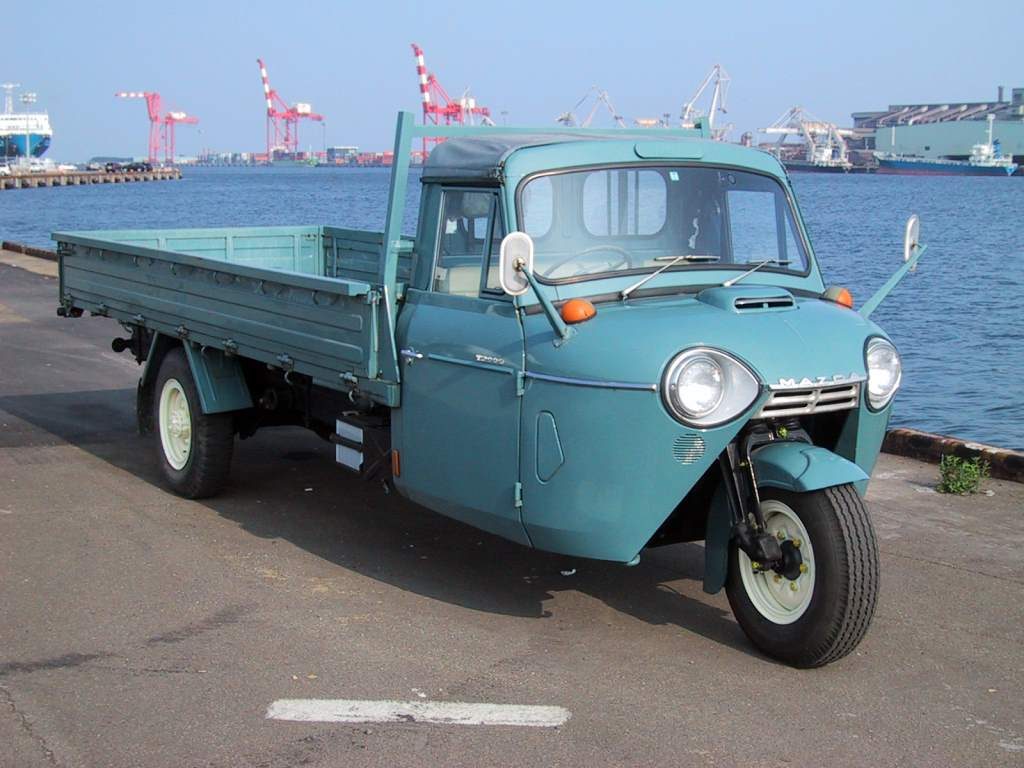 Long before Mazda went “Zoom-Zoom” the Japanese automaker was, from the late 1950s through the mid ‘70s, producing three-wheeled, ultra-utilitarian pickup trucks. While some, such as the T600, were little more than a glorified auto rickshaw with a steering wheel and enclosed two-seater cab, the T2000 could stretch to almost 20 feet, seat three, and offer 12 feet of cargo space supported by twin rear wheels. With Mitsubishi, Daihatsu, Orient and Kia also building similar such “trike-trucks”, they became ubiquitous on many Asian roads and were still being produced into the 1980s.

Developed by a team at Tokyo’s Keio University, the ultra-ambitious Eliica concept car has been making headlines since 2004. An abbreviation of “Electric Lithium-Ion Car”, each of the Eliica’s eight wheels has an 80-hp electric motor, enabling a top speed of 230 mph and 0-62 mph in four seconds. Unlike most such speedy, state-of-the-art prototypes, the Eliica is a four-seater four-door (with rear gull-wings), yet its small wheels enable a low, aerodynamic stance. There’s been talk of this freakish, forward-thinking ride entering production since 2008, with plans for at least 200 units. 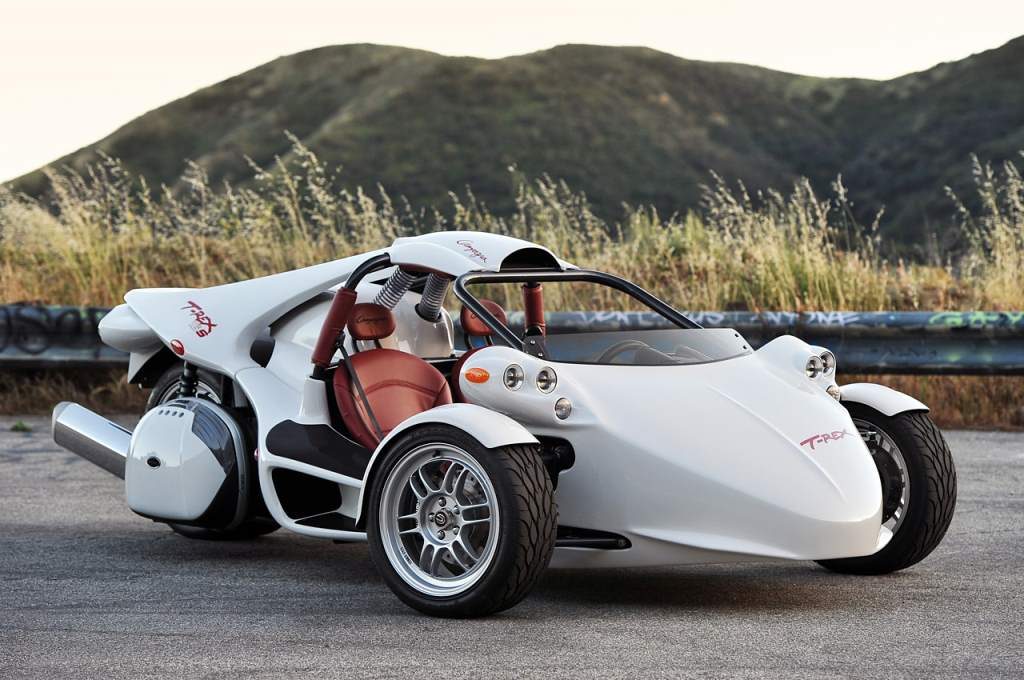 Like most of the more fun-to-drive three-wheelers, Campagna’s T-Rex has its single wheel at the rear. Officially classified as a motorcycle, this futuristic Canadian creation delivers bike-like visceral thrills, only with a steering wheel, tandem seating, and the barest of creature comforts. Looking like something a superhero should step out of, it also produces muscular performance from a 160-horsepower, inline-six BMW engine (0-62 mph in 3.9 seconds). Doubters foresaw the entirely impractical T-Rex swiftly emulating its namesake into extinction, but it’s now been in (very low-volume) production for more than 20 years. 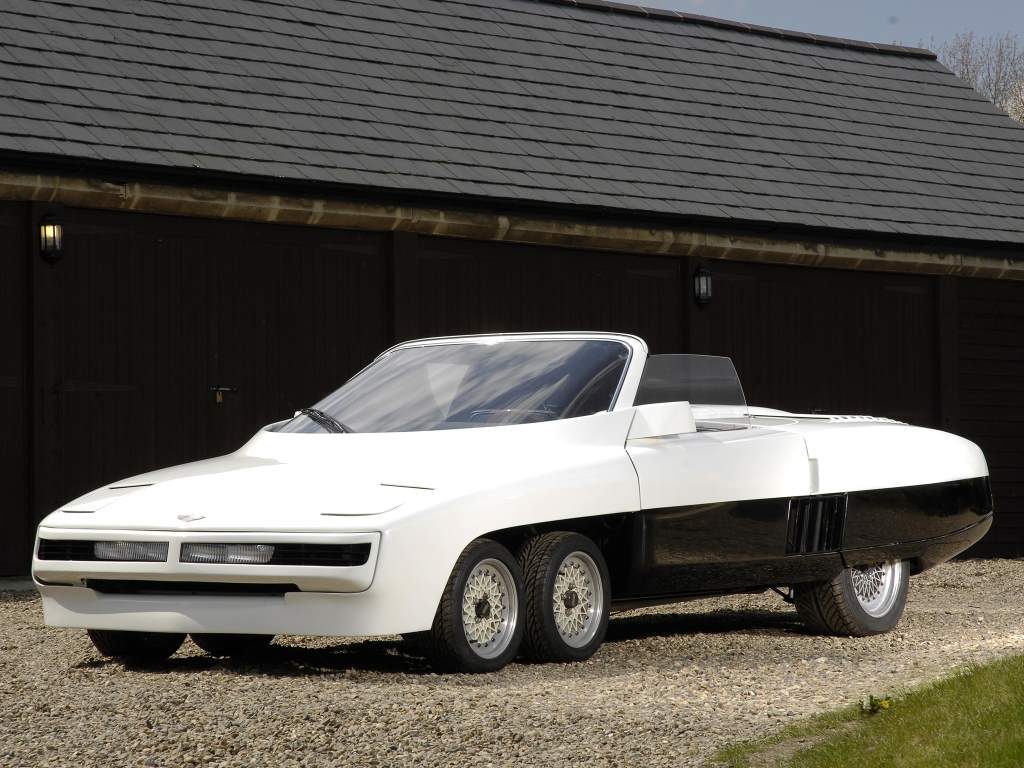 Another company taking cues from Tyrrell’s P34 was niche English automaker Panther Westwinds, which set out to build an even more bizarre six-wheeled, street-legal convertible in 1977. Ultimately, they only managed to build two of these extravagant Thunderbirds-y anomalies. Steered by twin pairs of front wheels, Panther claimed a 200 mph-plus top speed for the Cadillac V8-propelled Six, which also featured luxurious appointments almost unheard of at the time, including a phone and TV. Happily, both examples of this fabulous folly survive, with one offered for sale for around $220,000 in 2010. 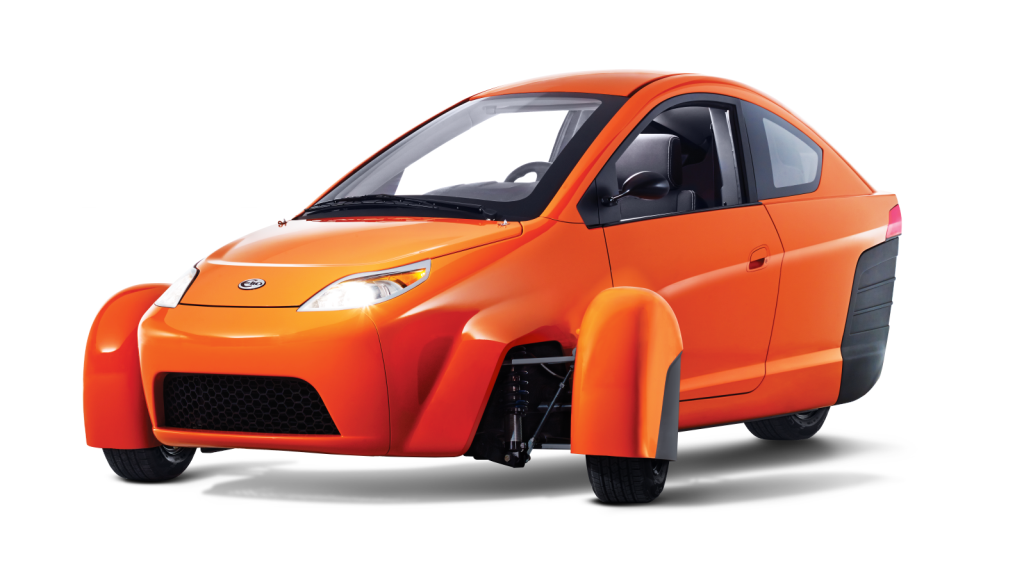 With more than 50,000 already reserved by eager customers (deliveries were recently delayed until 2017), Elio’s 84-mpg, $6,800 trike has clearly captured imaginations in an era of uncertain gas prices and environmental awareness. While legally classified as a motorcycle, this aerodynamic tandem-seater superficially resembles a regular ultra-compact car, sans rear wheels and with a protruding pair up front. Production versions are expected to boast AC, triple airbags, and ABS. With Arizona-based startup Elio Motors aiming to build 250,000 of these stylish stunners annually, the Elio could be the first commonplace three-wheeler on American roads. 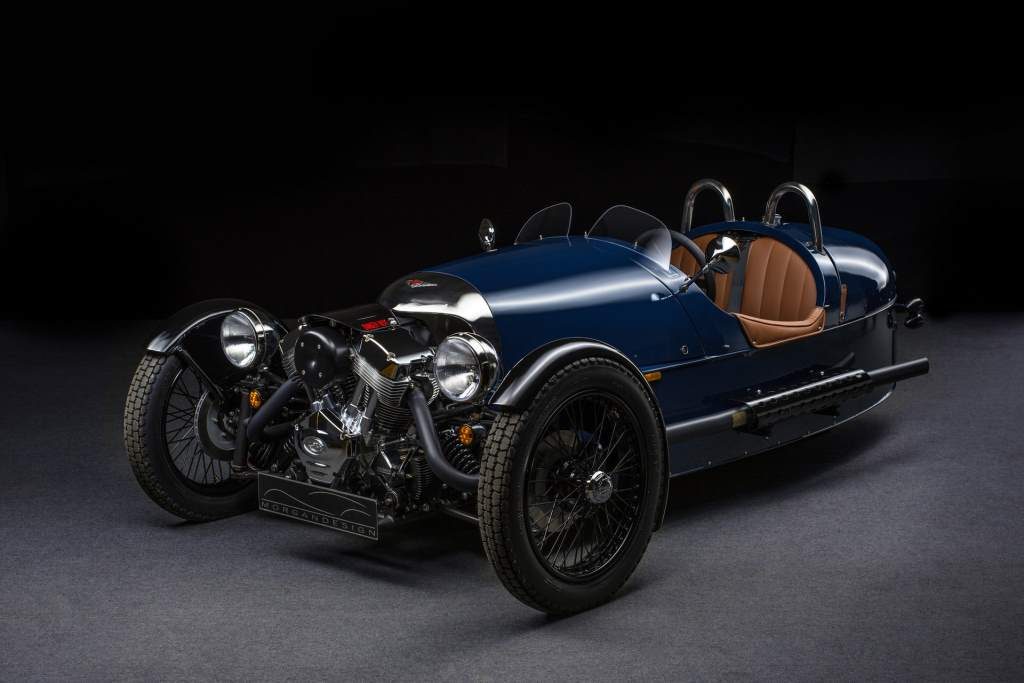 Tucked away in a sleepy English spa town, the Morgan Motor Company’s first-ever cars, in 1911, were three-wheeled “cyclecars”. A quarter-century later Morgan started producing standard four-wheelers and by 1952 their one-at-the-back wonders were no more. That is until 2012, when a retro-styled but entirely more potent 3-Wheeler revival model was unleashed, powered by a 2-liter S&S V-twin capable of catapulting the two-seater to 60 mph from rest in an estimated 4.5 seconds. With its leather-padded cockpit and “bomb release” starter button, this throaty throwback lovingly encapsulates World War II-era English eccentricity. 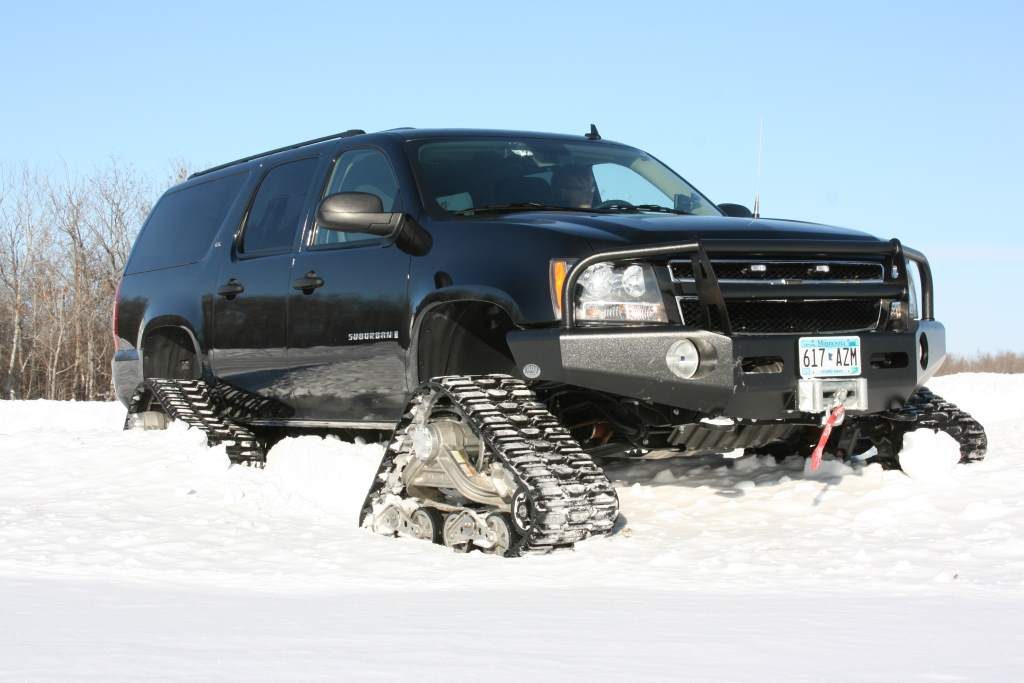 If you want to do away with wheels or together – and/or find yourself frequently stuck in snow, mud or sand – consider fitting your vehicle with Mattracks rubber caterpillar tracks. Born of the imagination of the owner’s 11-year-old son, Minnesota-based Mattracks track conversion system can be applied to a wide array of vehicles, including SUVs, pickup trucks, quads, RVs and even buses. In fact, the actual wheels remain on a Mattracks-converted vehicle, with installation requiring the removal of tires and then bolting the track assembly to the wheel studs. Not cheap, but certainly unique. 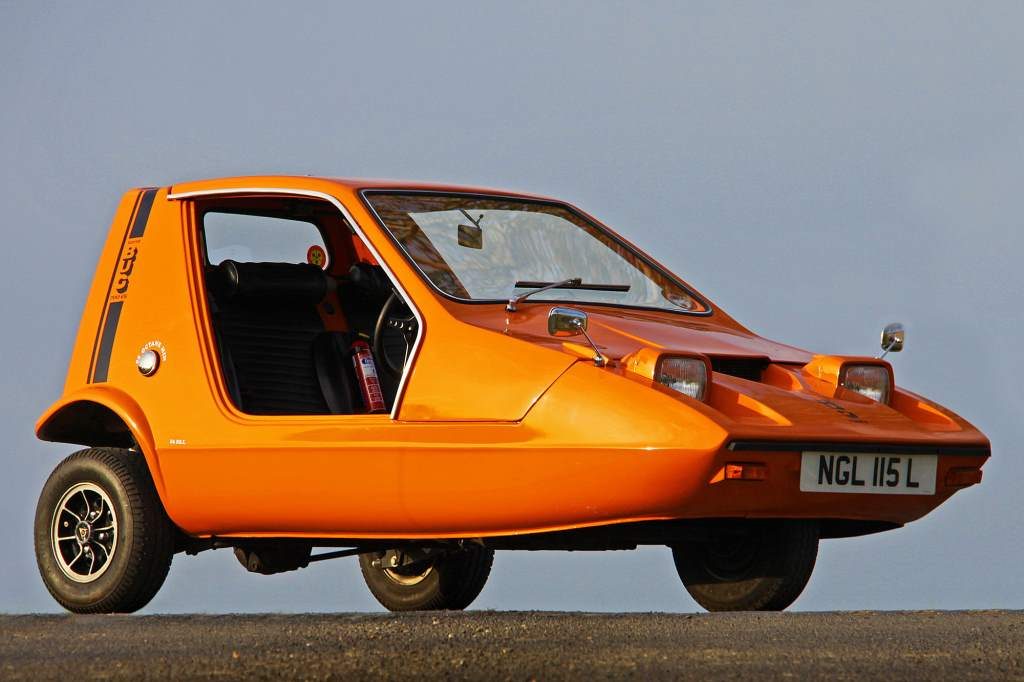 Despite only being made from 1970 to 1974, Britain’s quirky Bond Bug retains a cult following. With its lift-up canopy and radical wedge shape, this fiberglass microcar looks like it should sprout wings or go submarine in some low-budget sci-fi flick. Initially built by Bond Cars Ltd. and then by Reliant, almost all of the 2,270 Bugs were in a loud tangerine orange, which only added to their head-turning, bell-bottom-era hipster appeal. Capable of 76 mph yet with go-kart-like handling, the Bug is probably the most fun you can have in a two-at-the-back three-wheeler.