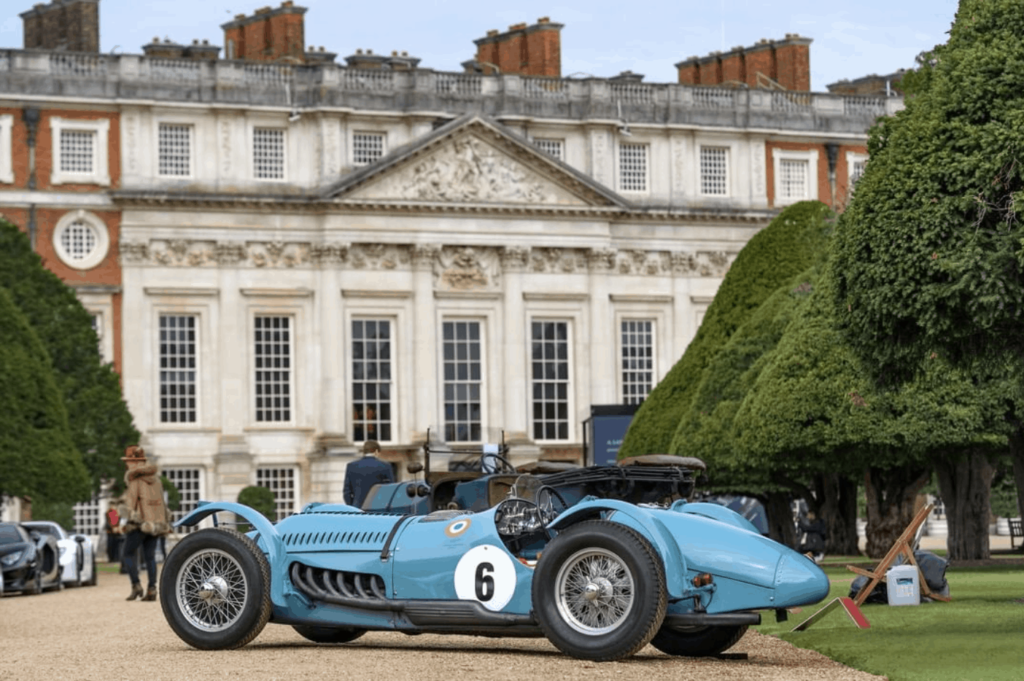 What if I told you that for the last 8 years in England, there has been an exquisite car show showcasing some of the rarest vehicles in the world? Now, imagine the most elegant, vast manor in the English countryside. Then, imagine that manor surrounded by almost 1,000 of the world’s rarest cars. Why would such an event occur? Well, to honor the Queen, of course! On September 4th-6th of 2020, that magnificent image you dreamed will be a reality at Hampton Court Palace, the location of the 2020 Concours of Elegance.

For the first time in six months, the global motoring community will be brought back together — with numerous precautions and safety measures enacted. Originally, the event was held in 2012 to honor the diamond jubilee of Her Majesty The Queen’s reign. Because of the event’s great success, it has continued ever since. Lucky us!

At the Concours of Elegance, you can expect to see 60 of the rarest cars in the world. Uniquely, the judging panel to select the Concours of Elegance winner is made up of the owners of the cars. They cannot vote for their own and are required to vote for the other vehicles to select the “Best of Show.” Alongside the 60 rarest cars in the world, hundreds of other automobiles are all entrants to The Club Trophy.

“Passion Of A Lifetime” Marks Gooding & Company’s First Auction Outside of The U.S.

The Gooding & Company “Passion of a Lifetime” auction was set to occur in April. Needless to say, that did not happen. While Gooding & Company is unarguably globally renowned, this auction will be the first of theirs to be held outside of the United States. What better place to make a debut outside of the U.S. than at one of the most prestigious motor events in the world?

Unable To Make It To England? No Problem!

Because of COVID-19, the event has a restricted audience capacity, as well as tickets that are separated between different days and times to limit the number of people at the auction at once. All that to say, you can still fully view and partake in the auction from anywhere in the world.

On the Gooding & Company website, there will be a live auction broadcast. Along with that, there is the option of partaking in telephone and absentee bidding. With that, if you are interested in having one of the cars as your own, you can even register to bid on the Gooding & Company website. It is important to note that the registration must be received at least 24 hours before the beginning of the event on September 4th.

Gooding & Company has the entire detailed collection of the 15 cars available for auction on their website. With that, every one of the vehicles has a rich history of being directly involved in both European sports and racing throughout the 20th century.

Below, we have outlined the 5 rarest cars in the “Passion of a Lifetime” auction, taking place on September 5th, 2020.

Thought to be one of the most authentic and notable Bugattis in existence, the early beginnings of the 1934 Bugatti Type 59 Sports were as a Grand Prix car throughout the 1934 and 1935 seasons, winning the Belgian Grand Prix and placing 3rd at the Monaco Grand Prix. Two years later, it was reconfigured as a sports car by removing the supercharger and changing it to a new dry-sump gearbox. From there, it became the speediest sports car in France until 1937.

Following that, it became owned by King Leopold III of Belgium. At that point, it was repainted black. Notably, this beauty from 1933 has a straight-eight engine and piano-wire wheels. Since then, it has been carefully passed on to four different owners. Although this is one of the oldest cars in the auction, the preservation of the car is unmatched. Stepping into this vehicle, or even just viewing it, allows you to feel the importance and lasting legacy that Bugatti has in sports and racing vehicles.

If you aren’t already enamored by the timeless beauty of this car by the photo,  we have no doubt this video will help you fall in love. The video shows the Type 59 gracefully driving through windy roads with beautiful orchestral music alongside two other notable Bugattis in the auction.

This vehicle is expected to sell for more than 10 million pounds at the “Passion of a Lifetime” auction, the equivalent to 13 million USD.

If I were watching a blockbuster film from the 1960s, this is exactly the car I would imagine the main characters to be cruising down a lovely road in. The first thing that you’ll notice when looking at this stunning 1961 Aston Martin DB4 GT Zagato is the pristine peony red paint job. Well, you are not alone in noticing that! This car is one of nineteen of it’s kind — and, the only one in existence to be this beautiful color. The DB4 GT Zagato was pivotal in defining the unmatched designs of what Aston Martin is known for to this day.

As a result of the deliberate preservation, this car is regarded as one of the most original, in-tact vintage Aston Martins. Notably, this vehicle is equipped with a 6-cylinder engine and a 4-speed manual gearbox. And, this beauty can go from 0-60 mph in just 6.1 seconds. To date, the vehicle has never had a complete restoration — it even still has the matching-numbers engine. The current owner since 1985 kept it unimpaired through driving it for 30,000 miles.

The 1937 Bugatti Type 57S Atalante, in the best way possible, looks like the runaway car for the 1950s seasoned villain mastermind. Just me? All that to say, in reality, the Type 57S is truly one of the most sought-after of all Bugattis. The unmatched aluminum Atalante Coachwork was designed by Jean Bugatti. In 1937, the first owner was Earl Howe, a British motoring icon and the previous president of the Bugatti Owners’ Club.

The vehicle is 83 years old and it still retains the original engine, supercharger, bodywork, and chassis. The current owner had it artfully and respectfully restored by Ivan Dutton Ltd. Distinctly, the Type 57S is equipped with a Marshall K200 supercharger, a 4-speed manual gearbox, and 4-wheel cable-operated mechanical drum brakes.

Just one of seventeen of its kind, the Type 57S is expected to sell for more than £7,000,000 at the Gooding & Company “Passion of a Lifetime” auction, the equivalent to over $9,000,000 USD. This car is truly a tell-tale sign of how thoughtful restoration can bring a car back to life. With that, on the inside and outside, this car is sure to transport you back in time.

The one of only twenty built, the 1955 Astron Martin DB3S, finished in stunning almond green, has a rich and interesting past in Australian automotive racing. The vehicle was one of three cars in David McKay and Tony Gaze’s Kangaroo Stable, the Australian racing team. And in 1957, the car set a new Australian Land Class D Speed Record, reaching speeds of 143.19 MPH – on a dirt road! Since then, it has been involved in many historic races, being artfully restored along the way.

In 1960, the car was wrecked at Bathurst. Because of that, it was placed in storage until the 70s. Despite the restoration process, the car maintains its original engine — the No. VB6K/102. Notably, the car has three Weber 40 DCO3 carburetors, a 6-cylinder engine, and a 4-speed manual gearbox. With that, the artful and speedy design of this car made it eligible for all major racing historical events, including the Goodwood Revival.

The 1928 Bugatti Type 35C is perhaps the most historically and enduring vehicle of the bunch. Just 8 years shy of being 100 years old, this beauty is still drivable. In short, the rich history involved reaching endless sports car events, hill climbs, and major European Grand Prix races.

The mechanical restoration was attentively and carefully done by Ivan Dutton Ltd. Prominently, the vehicle is equipped with an inline 8-cylinder engine, a roots-type supercharger, and 4-wheel cable-operated mechanical drum brakes. Through the restoration process, Ivan Dutton Ltd. was careful to retain the original bodywork and serial-numbers. The Type 35C is the emblem of the golden age of Grand Prix racing.

The Complete List Of “Passion Of A Lifetime” Auction Cars

(The featured photo was taken by Tim Scott, a well-known automotive photographer. All of the images within this article are copyright and courtesy of Gooding & Company. The remarkable photos of the cars featured in the “Passion of a Lifetime” auction are by Mathieu Heurtault.)

When is the "Passion of a Lifetime" auction?

The event will be held on September 5th, 2020 during the September 4th-September 6th Concours of Elegance.

Where is the "Passion of a Lifetime" auction?

The auction will take place at Hampton Court Palace, located in the London Borough of Richmond-upon-Thames.

How many cars are in the auction?

There are 15 total cars up for auction.

What is Concours of Elegance?

The Concours of Elegance is an annual motor show that takes place in London. The event serves as a way to bring together all of the rarest cars in the world. Typically before the event, there is a 2-day driving tour of many of the cars involved. At the event, there is a winner that is judged by the owners of the vehicles to win “Best of Show.”

For the first time this year, Gooding & Company is holding a “Passion of a Lifetime” auction of 15 rare cars.

Can I bid if I am not at the event?

Yes, you can register to bid via telephone or absentee ballot at the Gooding & Company website.