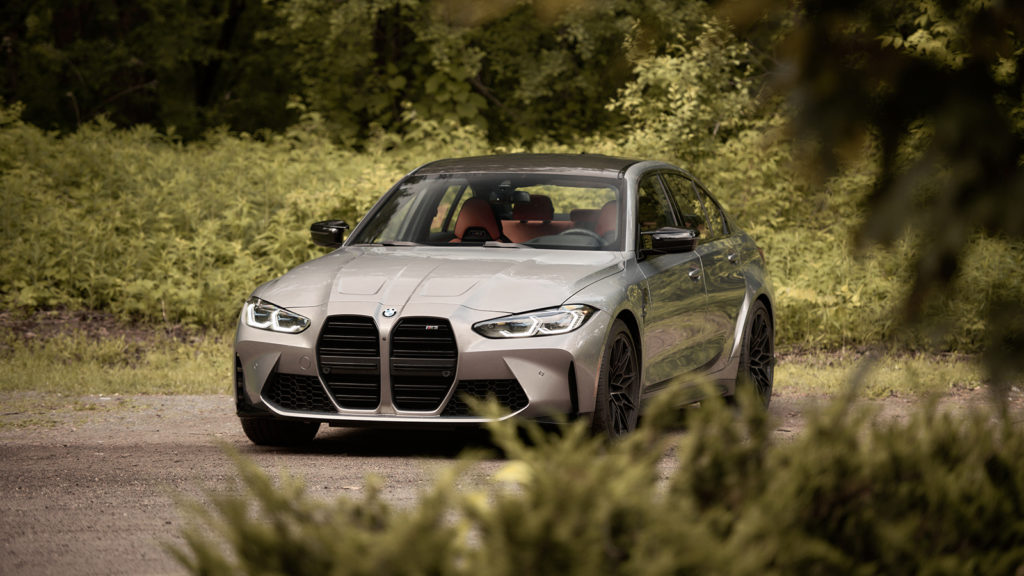 The 2021 BMW M3 and M4 siblings have arguably been the most controversial vehicles to be released this year due to their enormous new vertical nostrils. What’s in a grille, you ask? In BMW’s case, it means a lot since the carmaker has used its kidney grilles as a symbolic design trait for over three decades. I personally like where BMW is going with this, but because taste is subjective, we’ll focus on other areas instead.

We’re here to figure out if this new M3 is still amongst the best at delivering a good time behind the wheel. We took the 2021 BMW M3 out for a few long drives, over the period of a week and about 600 miles, to see if it still deserves the iconic M badge. Here’s what we found.

We Get The Manual, While Others Don’t 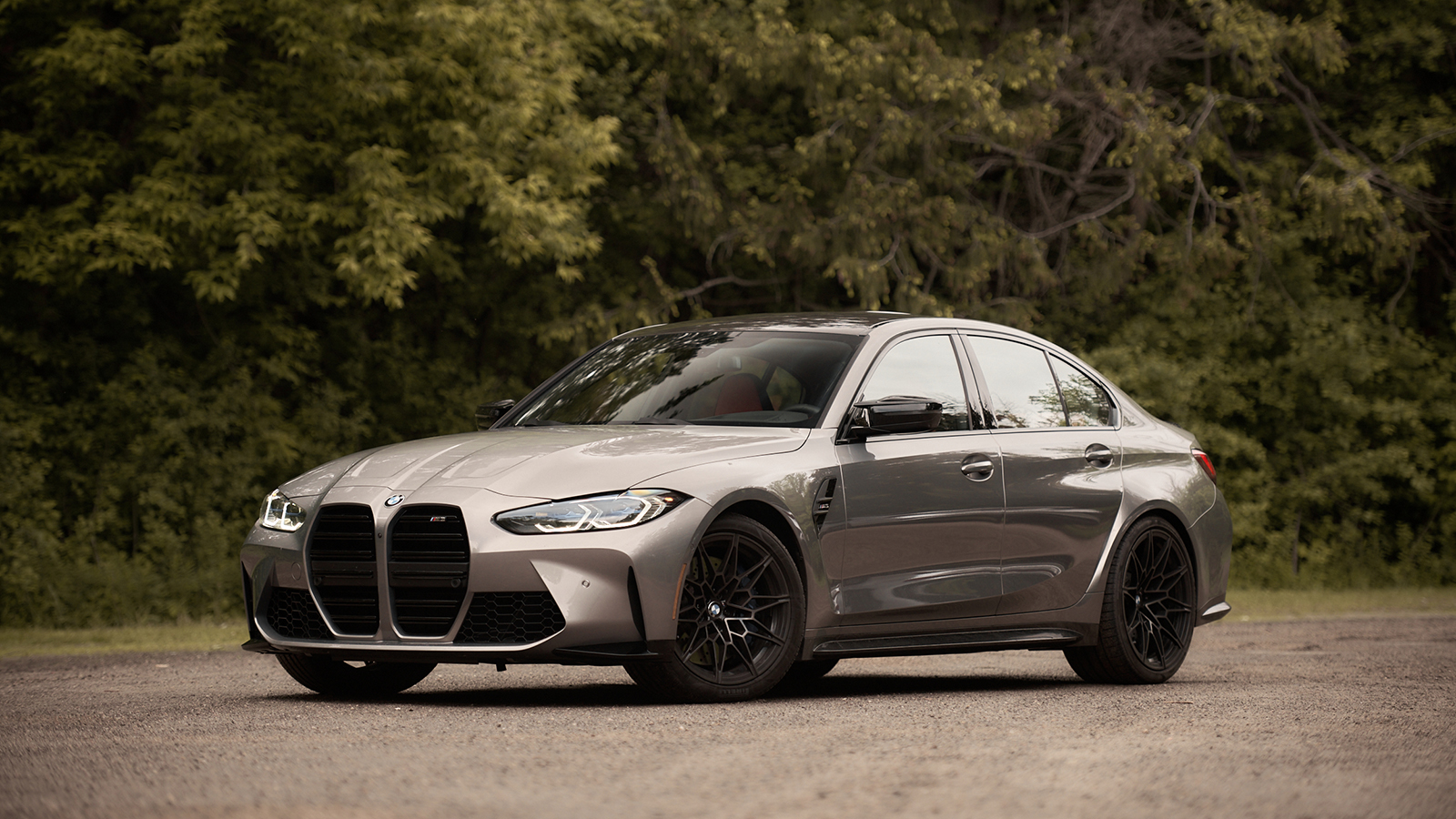 Perhaps the boldest statement from this new-generation M3 isn’t the styling but rather how it was packaged for the North American market. While our European friends can only get this thing with an automatic transmission, we get it with a 6-speed manual and rear-wheel drive as standard equipment. Has the world turned upside down? It seems it has, but we’re not going to complain about this decision.

Opting for the M3 Competition model in the US and Canada adds a rapid-shifting 8-speed automatic transmission, xDrive all-wheel drive, and launch control, with a 30 hp gain and a higher sticker price. Since that one is a completely different animal, we’ll review it at another time. 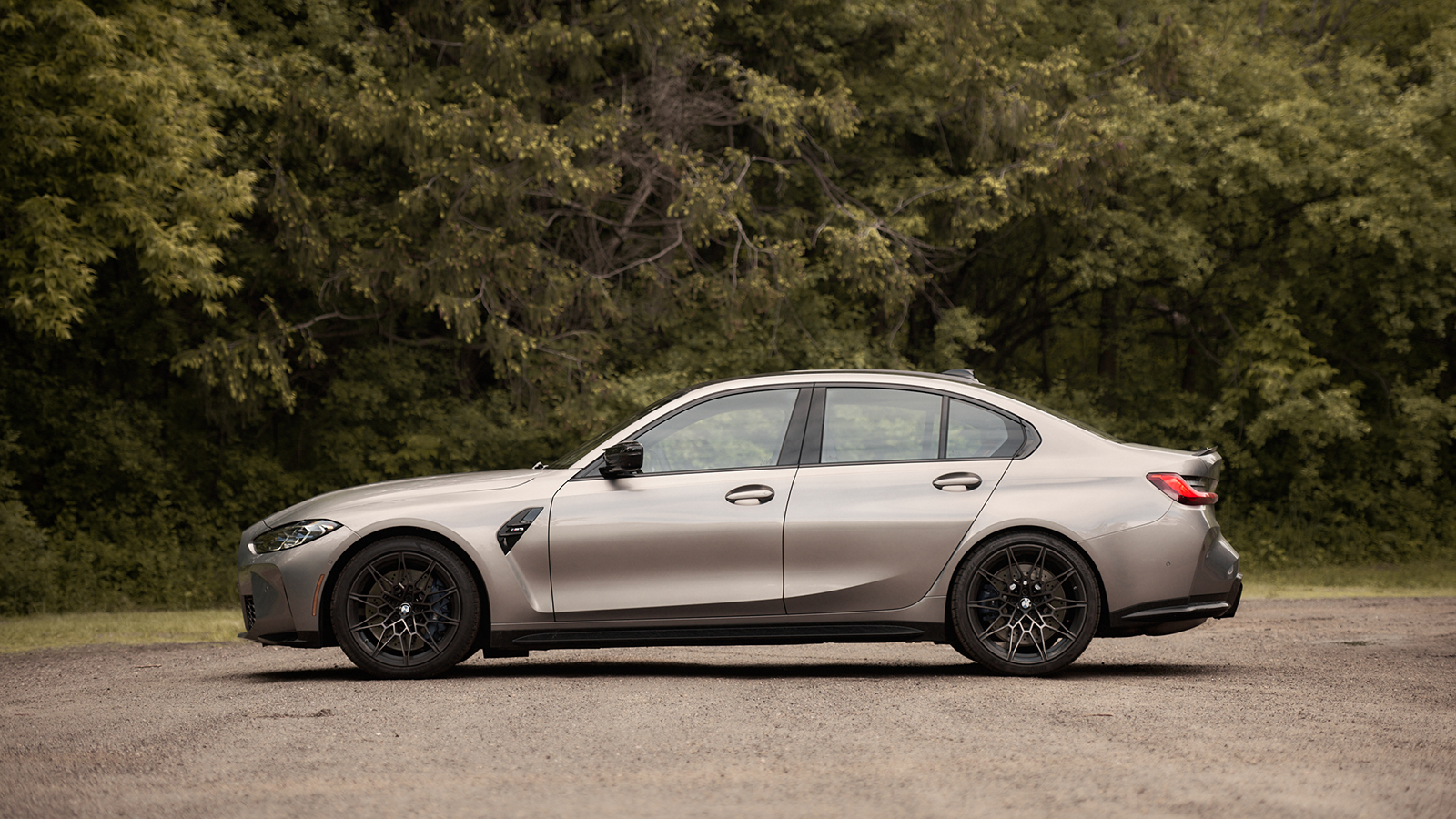 Kicking off at a starting MSRP of $69,900 before piling on optional packages (the Oxyde Grey Pearl color of our tester alone is worth $1,950). Our M3, which had only a few options added on, already had a sticker price of $76,950.

The 2021 BMW M3 is powered by a 3.0L twin-turbocharged straight-6 engine that’s good for 473 hp and 406 lb.-ft. of torque. In case you’re wondering, no, this isn’t the same engine as what sits underneath the hood of an M340i, a Z4, or a Toyota Supra. Those cars only get a single turbo setup, with an engine better known internally at BMW as the B58.

The M3 gets the much more potent S58 unit which debuted in the X3 and X4 M crossovers. On top of adding an extra turbocharger, BMW designed it like a race engine with a forged crankshaft, connecting rods, and pistons. It uses a shorter stroke than the B58, allowing it to rev higher, from 7,000 rpm to 7,300 rpm, and has greater cooling capacity to cope with more frequent track use.

This hardware allows the manual M3 to sprint to 60 mph in 4.2 seconds as per BMW’s specification sheets. However, good luck managing all that power during launches with only 2-wheel drive and 3-pedals to work with. 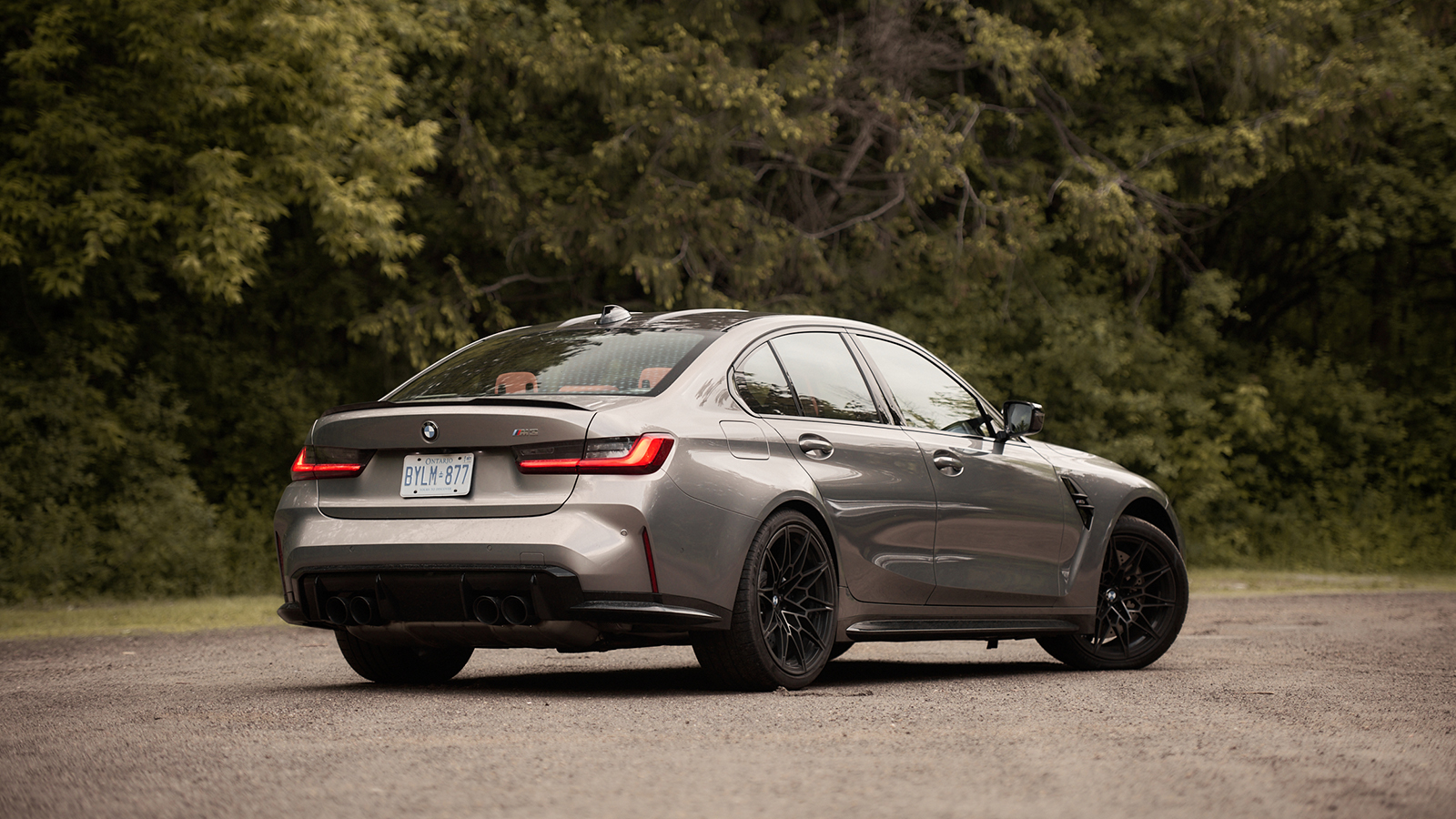 In this configuration, the M3 really aims at regaining its title as a true driver’s car. If you’re more of a numbers person – the kind of individual that prefers bragging about acceleration times and track records, then the Competition model is the one you’ll want. With its electronically controlled limited-slip differential and highly amusing drift features, the Competiton version should give plenty to gloat about.

A Powerful Yet Precise Tool 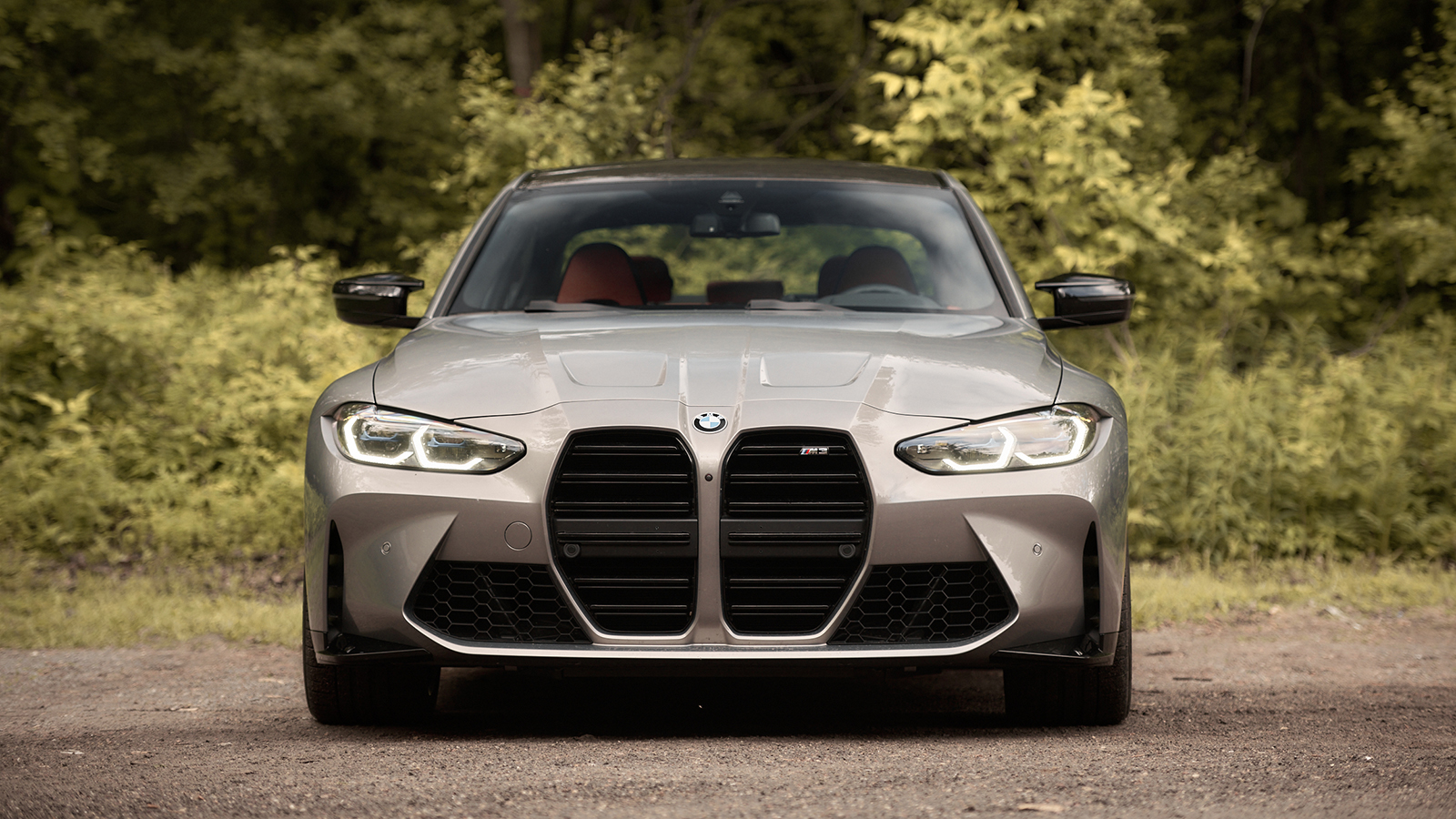 There have definitely been more vocal BMW M3s in the past. Some were powered by naturally aspirated straight-6s and magnificent V8 engines that sang glorious induction melodies. But none of them have demonstrated the level of precision that this new generation model offers.

What I mean by precision is the speed at which the M3 reacted to my inputs, whether it was steering maneuvers, brake applications or even shifting from one gear to the next. Point it in one direction, and it instantly shifts its trajectory without flex or body roll. And while it didn’t sound particularly loud nor exciting when running at full boil, this drivetrain put the power down in an impressively urgent and efficient manner.

It was also interesting to get behind the wheel of a modern high-performance German vehicle equipped with a manual transmission. The current auto industry has been spoiling us with blindingly quick machines that can easily be controlled using only two pedals. Fancy launch control systems and electronic aids have allowed for rapid deployment of power in recent years. So trying to tame one of these visceral beasts using a good-old stick was a highly emotional event that one must experience to understand fully.

Rowing Your Own Gears Is A Novel Concept 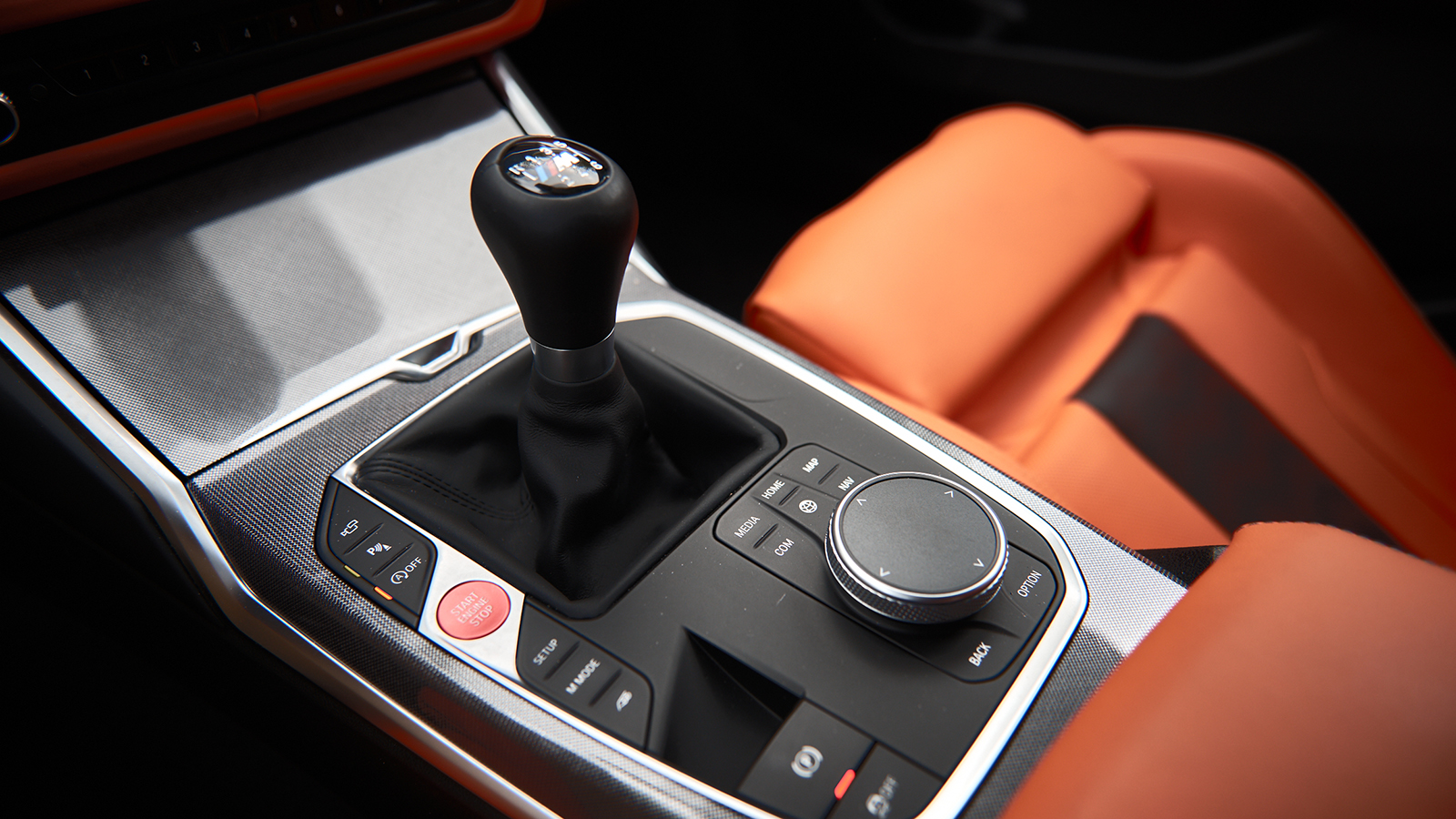 That all being said, I did find the shift lever to have an irritating rubbery feel to it and the clutch to be very springy. The spacing between first and second gear was also off, which made daily driving a bit of a hassle.

It was, however, highly effective during hard driving. While absent of any finesse or refinement, that gear lever took the hits when I dumped the clutch on the 406 lb.-ft. of raging torque.

The 2021 BMW M3 delivered its power with utmost urgency. The straight-6 needed to be revved out a bit to deliver its full power and torque, but when I let it stretch its legs, it rewarded me with relentless forward thrust and a willingness to repeat the experience once I engaged the following cog.

I achieved high-velocity momentum quickly in the M3, so you’d better keep your eye on that digital speedometer, or you’ll lose your driver’s license quicker than you’d think. This is a car that BMW built for the Autobahn, or a track, none of which we had at our disposal during our test. 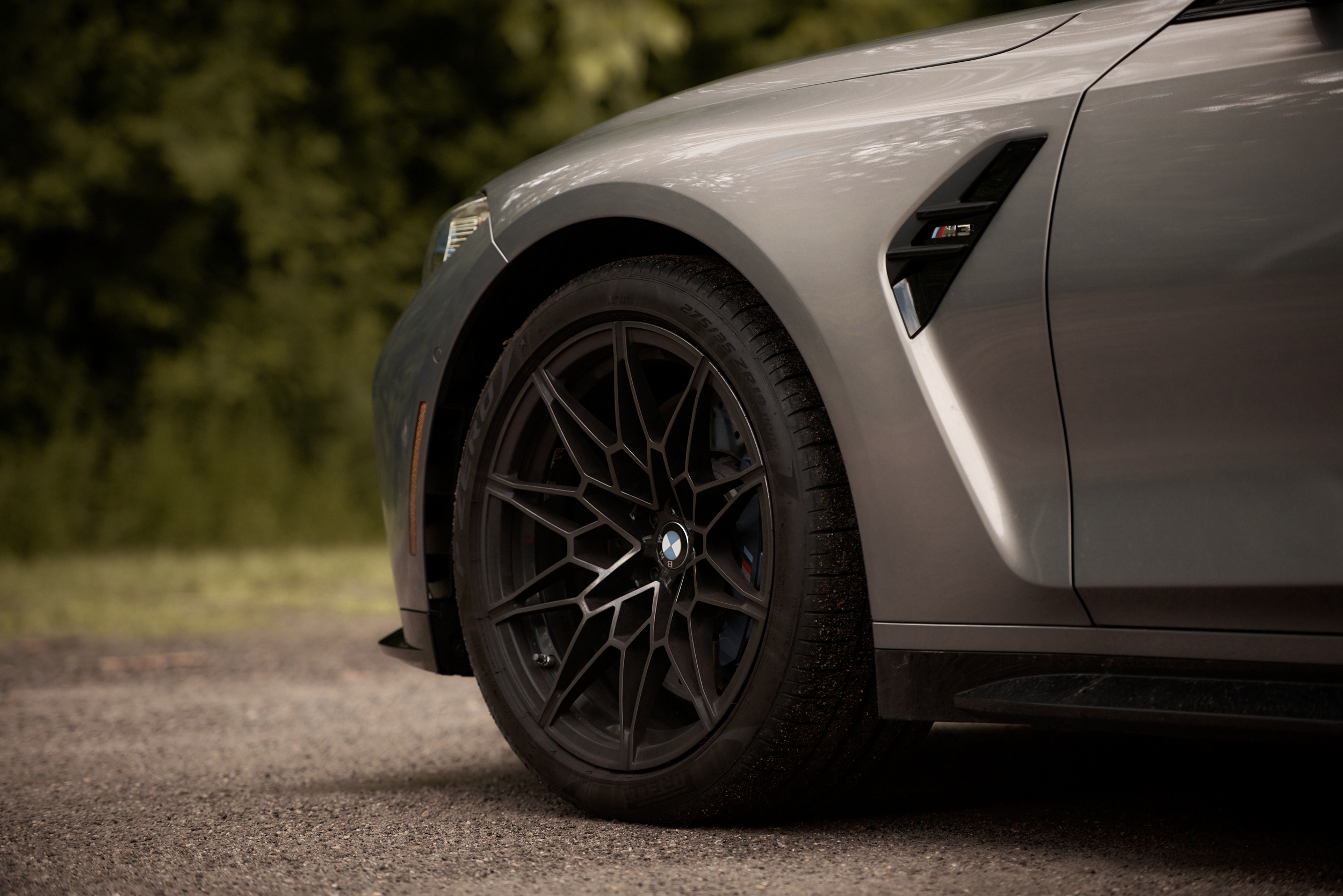 But above relentless power and neck-snapping acceleration, it’s out on winding roads that the 2021 BMW M3 really showed its worth. It rides on BMW’s latest CLAR modular architecture, which now underpins everything at BMW from SUVs to roadsters. The M3 was hyper solid on beaten roads, razor-sharp in the twisties, and transmitted delicious sensations through its wonderfully weighted steering. I could attack an apex at a full boil with it, and I held it at the limit without fear of losing grip. Upon exiting, I gradually applied throttle without having to cope with an overpowered rear end. Yes, the M3 did wag its tail when asked, but it also hunkered down and generated massive amounts of G-forces in corners.

Sadly, we couldn’t use the M3’s gimmicky drift analyzer on public roads. The system allows you to modulate the rear differential’s inputs to the tune of ten levels for optimal drift maneuvers. It then rewards its driver using a star system laid out directly on the car’s infotainment system. Looks like massive fun, just be prepared for the big tire bills and possible tickets.

The M3 is Still a Comfortable Luxury Sedan 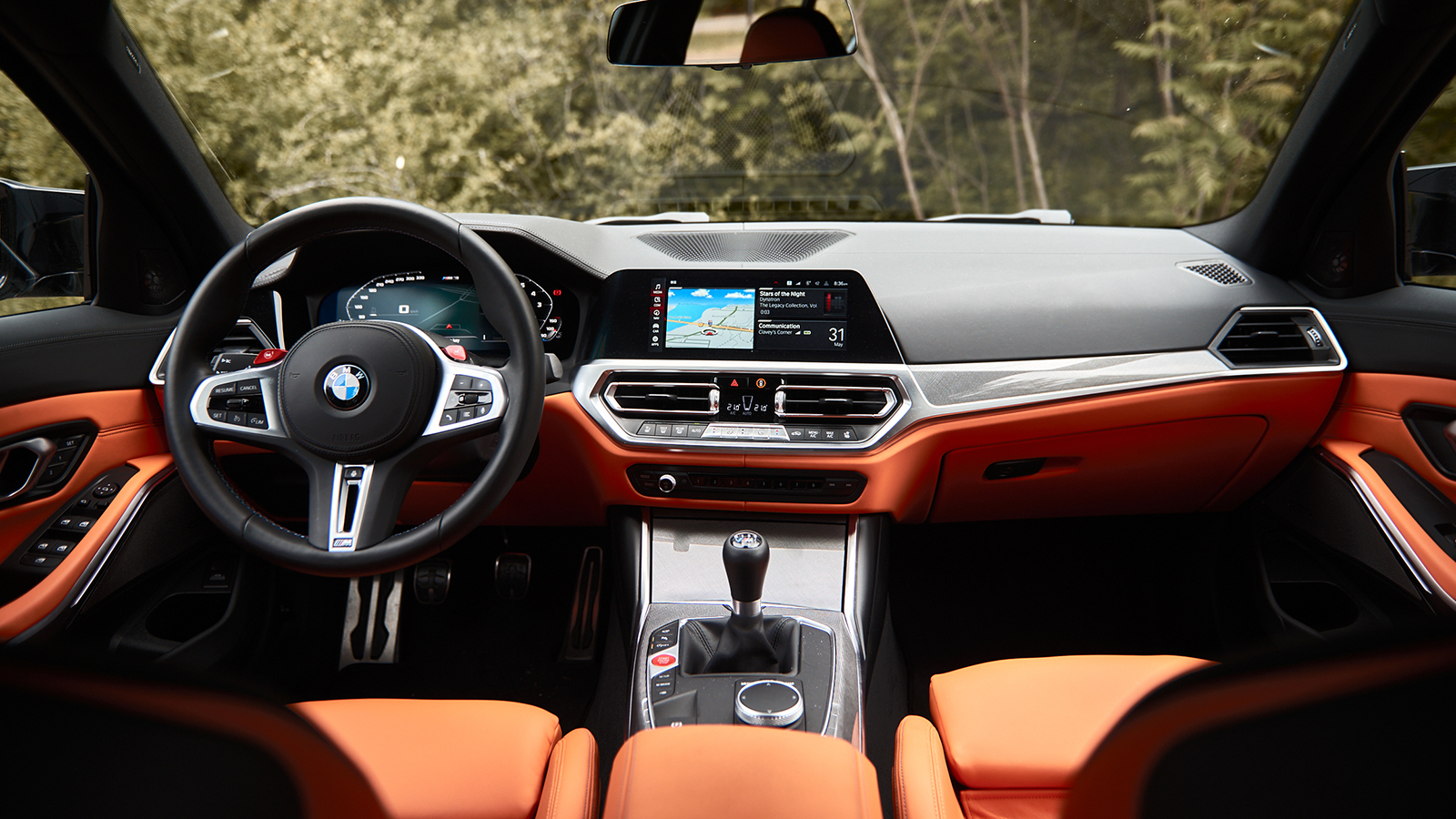 When you’re done devouring roads and constantly peeking through your rearview mirror for fear a police officer just spotted you busting the speed limit, the 2021 BMW M3 turns back into what is essentially a slightly stiffer BMW 3 Series. While that orange interior may not be for everyone (there are many more interior color combinations available), it felt fantastic to see some color in a BMW cabin after many years of dark, spartan interiors. 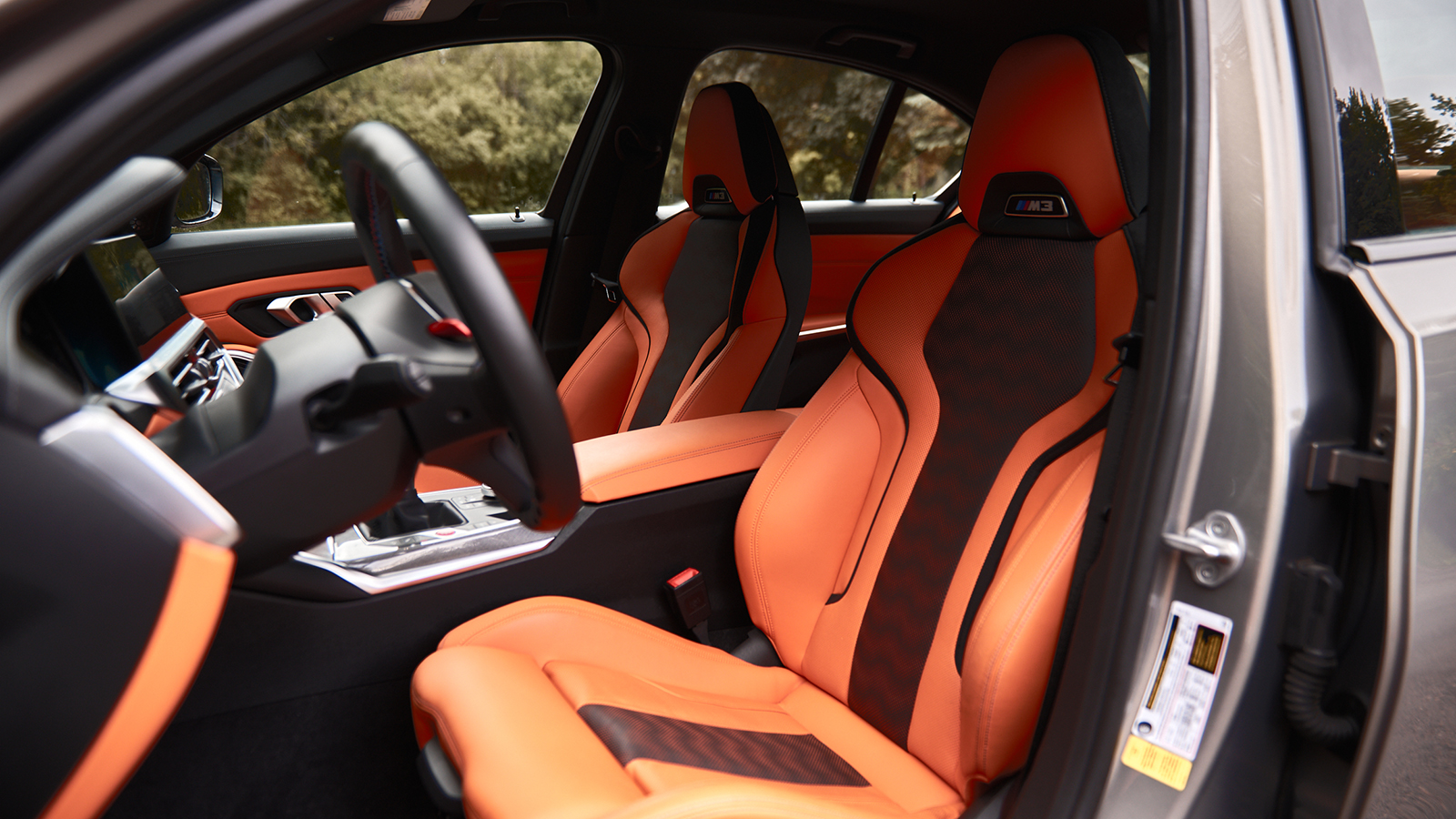 Those M sport bucket seats offered impeccable lateral and lumbar support for long trips. Their bolsters also adjusted for wider drivers like yours truly. Overall ergonomics are also a BMW strongpoint, and the M3 remains true to the company’s devotion to simple yet effective cabin design. All controls were well placed, easy to grasp, and intuitive to use.

Extra points go to the iDrive infotainment interface for always remaining so quick to react and a peach to operate via its console-mounted dial. However, I did experience some random disconnections from the wireless Android Auto feature.

I’ll also say that BMW’s latest drive mode buttons – located on the steering via M1 and M2 – were a welcome touch. They allowed me to really tailor the machine to my liking, but accessing the available configurations proved overwhelming at times due to the immense complexity of it all.

BMW also allows the driver to change the car’s displays for a more focused driving experience through the M Mode button. Sadly, this button didn’t put the car in actual M Mode. It put the gauges in M Mode. That wasn’t confusing at all, BMW! 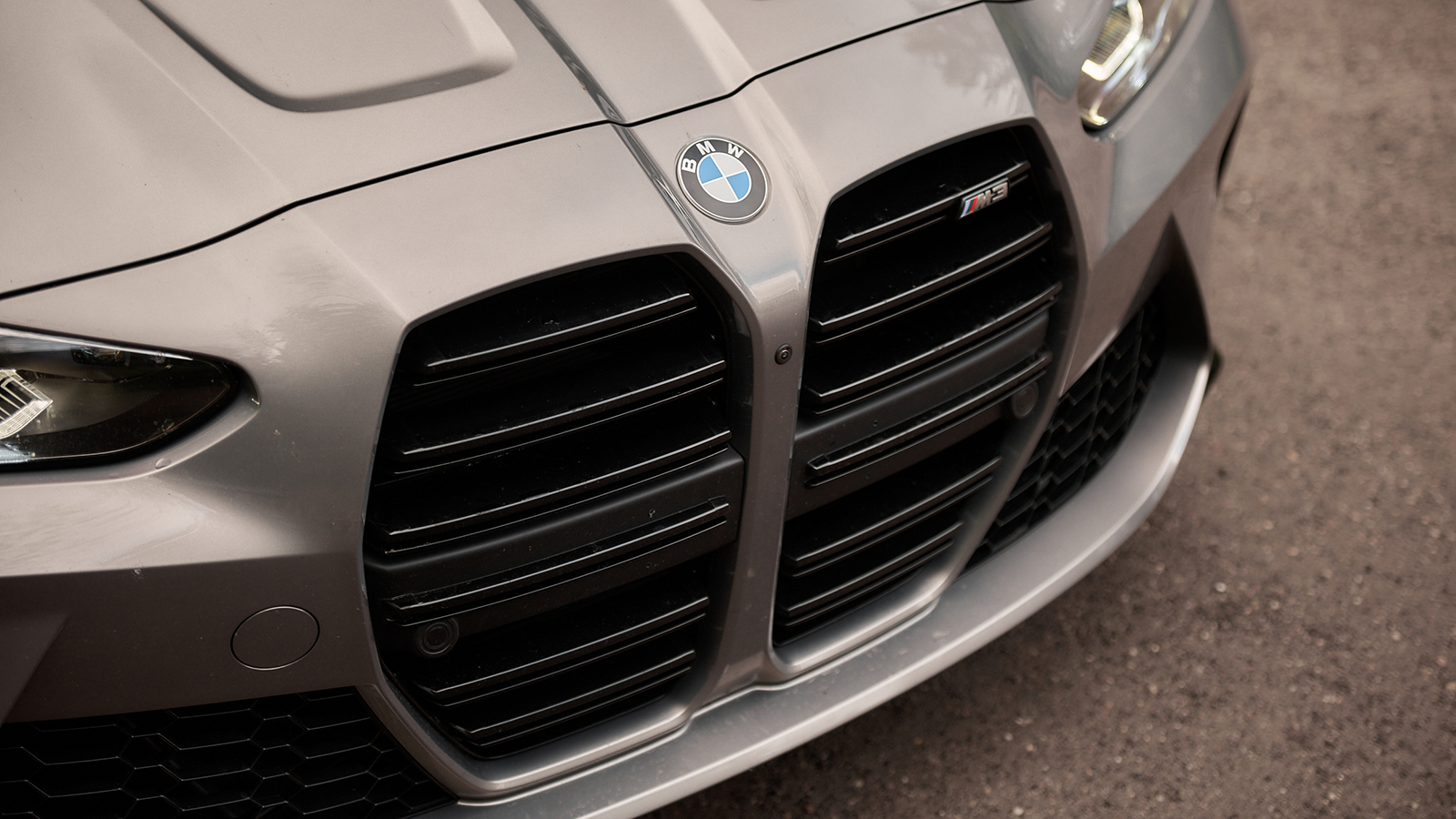 All in all, the 2021 BMW M3 stays true to its performance luxury sedan promise by beautifully blending adrenaline-inducing performance with the daily drivability of a German sedan, qualities that have allowed the M3 to remain an icon among automotive enthusiasts for so many years. As for its looks, it’s definitely polarizing, and it won’t please everyone. Still, everywhere I went with this press unit, an immense amount of stares, positive thumbs, and “nice car” comments were targeted in my direction. I think it’s fair to say that BMW is on to something with its new design language.

To virtually configure your own 2021 BMW M3 check out BMW.com.

Automotive journalist from Montreal, Canada. When William's not busy reviewing cars, he's ripping through some back roads in his modified MINI Cooper or fixing up his E39 BMW 540i. He also daily drives a 2001 Toyota Camry.