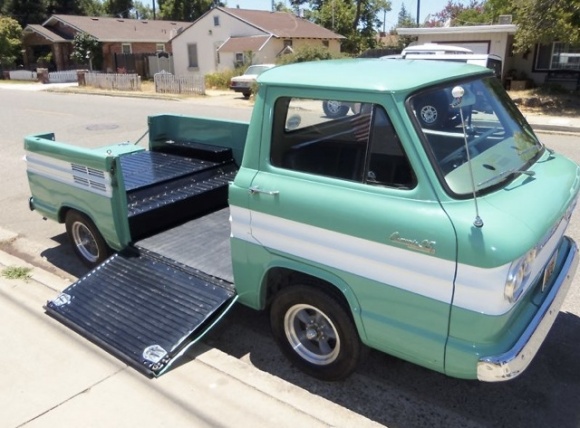 The 60s were a time of change, in cars as will as the culture. Compare the cars here from the early 60s to those from later in the decade and you’ll see.

The flash, chrome, and fins had given way to a more authentic look. Cars looked like what they were supposed to be be: a sports car looked like a sports car, a sedan like a sedan, so forth. In fact, it’s actually quite difficult to find truly odd cars made in the 1960s from American manufacturers, which hints that it may well be universally recognized as a high point in automotive design. 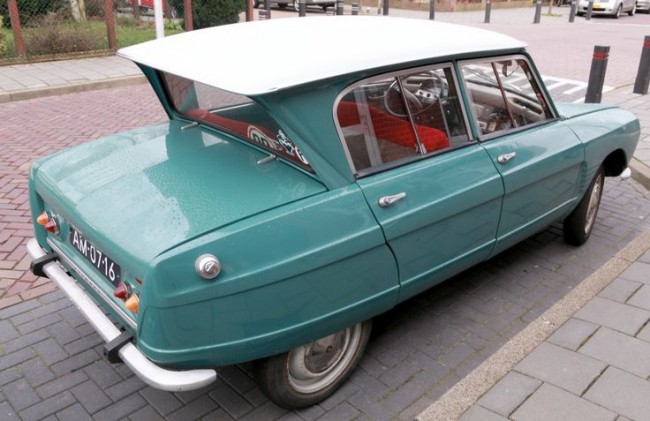 Launched in 1960 as a stand-alone brand, by 1961 the Valiant had become a Plymouth. The Valiant and its Dodge twin were Chrysler’s entries in the economy car segment, targeting the Falcon, Corvair, Rambler, and Volkswagen plus other imports. While none of the previous cars would be called beautiful, the Valiant certain falls on the low end of the attractiveness scale. The work of Chrysler designer Virgil Exner, who couldn’t seem to leave the ’50s behind (more later) the Valiant was less of a cohesive design and more a collection of Exner’s favorite styling cues (the sculpted line of the front fenders, the grille from a 1957 Chrysler 300,  sculpted rear fenders that ended as a small tail fins, and the  false spare tire cover on the trunk lid (sometime unkindly referred to as the toilet seat”. 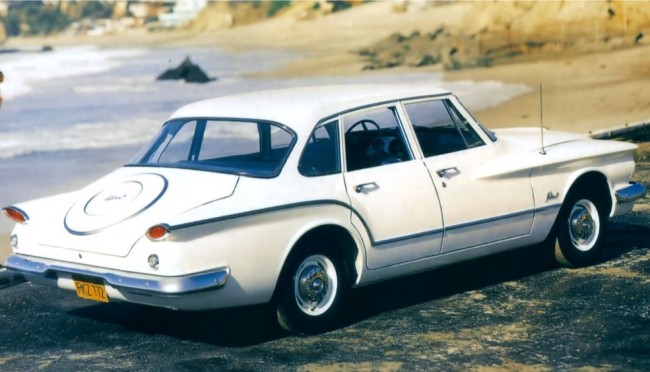 Ford had introduced its first generation Falcon-based Econoline for the 1961 model year. It was offered in two version initially, a three-door van and a two-door pick-up. The Econoline was described as a COE (Cab Over Engine) even though the engine sat under a cover between the front seats. Also introduced for the ’61 model was the far less conventional Corvair vans and trucks. With its rear-mounted engine, the van was very similar to the VW microbus. The truck was completely different, offering a Rampside version with a very low cargo floor accessed by a drop-down tailgate that reached the ground – making loading and unloading heavy items relatively easy. However, fleets wants a similar vehicle and by 1964 both Dodge and Chevrolet had vans based on the general 1960 Ford configuration. 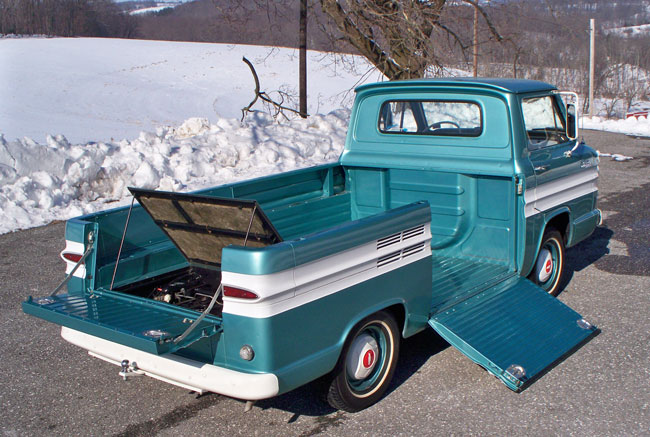 Competing against the marketing might and new products from GM and Ford, Studebaker frantically tooled up a restyled line of light-duty trucks for 1960 – its first since mid-1948.  The front half of the ’59 Lark sedan body were grafted onto the aged 1948 (leaf springs all-around) truck chassis to created a new line of trucks, called Champ.  So ancient was all the technology that the base engine was still a flathead. At first Studebaker attempted to use the existing semi-stepside bed from the previous truck, then purchased the tooling from Dodge for a bed that looked two sizes too big compared to the compact car based cab. 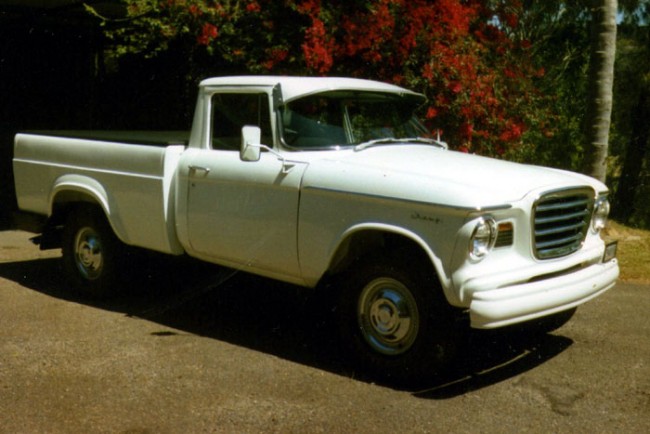 Back to our friend Virgil Exner, head of design for Chrysler. I was torn between which of two photos to share with you, the 1961 Imperial with the more outlandish rear, or the 1961 with the more outlandish front. First, an aside. At this point both Cadillac and Lincoln had significantly toned down their designs, Cadillac, graceful with sharp creases, and the more formal, conservative Continental. Compare those cars against either of these Imperials. The 1961 shown below demonstrates that Exner, unlike the rest of the auto industry wasn’t willing to give up on tail fins. In face, he perched tail lamps that looked like gun sites on top of them. And where the rest of the rest of the industry was moving toward the authentic, Exner included the faux spare tire carrier on the truck. BTW, the 1961-1963 models had a toned-down rear, but the headlights were mounted ahead of the body in chrome shells, like fog lights. By 1964 Chrysler was losing a great number of sales to Lincoln and the Imperial  became a near clone of the Continental. 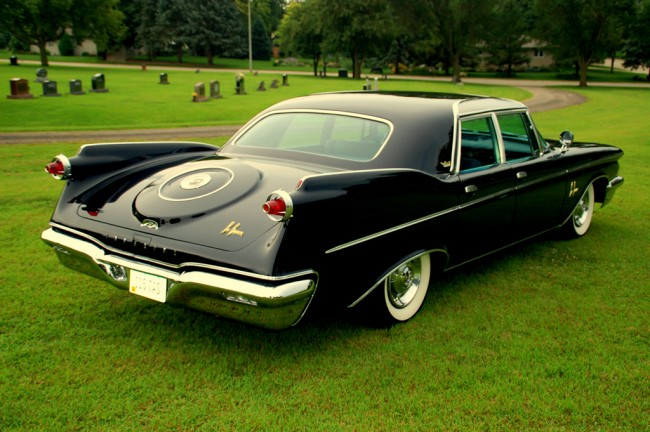 At the time the Pontiac division wanted to distance the Grand Prix as far as possible from the other mid-sized cars with which it shared its platform. To do so they gave the Grand Prix the longest hood ever on a Pontiac and a short trunk. They also converted what had been a subtle bid-like beak on earlier models into what could be described as a folded Edsel grille. To make matter worst, there was a  limited edition Grand Prix SSJ produced by Hurst Performance, Inc.  Once the Grand Prix was assembled, it was drop-shipped to a Hurst facility, where the process of converting it to an SSJ consisted of painting Hurst Fire Frost Gold metallic accents on the hood, roof, doors and outlining them with hand-painted pinstripes. An electrically operated sunroof was installed, a black or white  half-top was applied (with fake Landau irons!), the wheels were painted Fire Frost Gold metallic, and die-cast SSJ emblems were added to the front fenders, decklid and console. The result was a package that probably looked great in 1970 but dated soon after, and to our eyes in 2015, looks just plain odd. 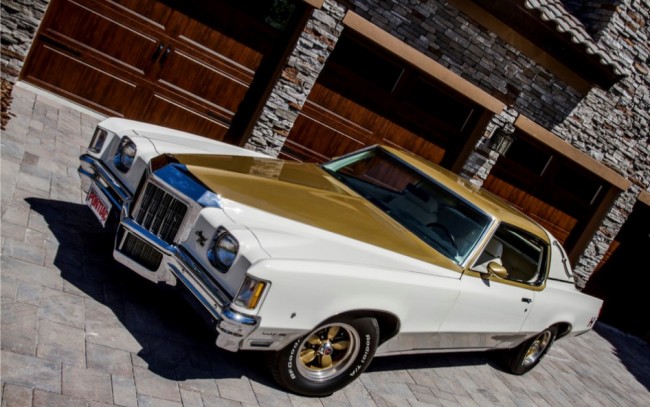 Yes, before the LeCar and the Fuego, Renault brought to these shores its model 16. While Japanese manufacturers were listening carefully to the complements and complaints of early Toyota and Datsun owners to improve their cars, Renault figured that if it was good enough for the other countries they sell the car, it’s good enough for the US. Not so. Besides the fact that it always looked like it was going to tip over in a turn, its strange dashboard, ergonomics designed to accommodate some alien life form, spotty service and parts supply, and a general disinterest in making things work in America pushed Renault out the door. Though they did make a brief return as owners of AMC from 1980 to 1987, when they dumped the whole  mess on Chrysler. 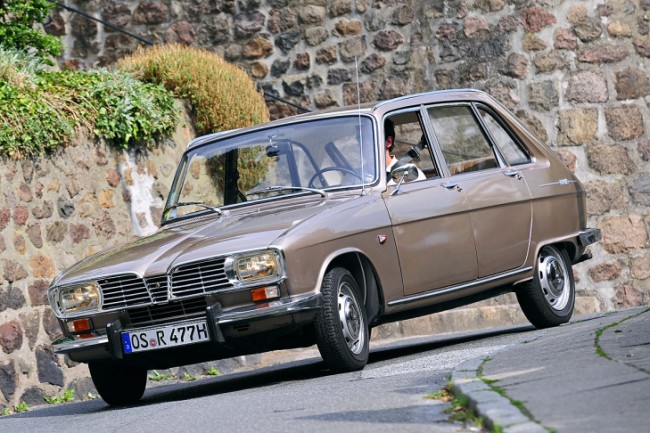 What could be odd about the Dodge Charger Daytona and its brother the Superbird? We grew up with these cars. They’ve been in movies ranging from F&F to Joe Dirt. But close you eyes and images it’s 1969 and you’ve never seen one of the cars. And then a friend hands you a photo. Your eyes would pop out of your head. The Dodge Charger Daytona, built to dominated NASCAR’s super speedways, featured special body modifications that included a very stout 23-inch-tall  wing on the rear deck (I’ve seen a photo of two people sitting on the wing), a special sheet-metal “nose cone” that replaced the traditional upright front grille, a flush rear rear window, a ‘window cap’ to cover the original Charger’s recessed rear window, specific front fenders and hood that were modeled after the upcoming 1970 Charger,  fender mounted tire clearance/brake cooling scoops. The Daytona was built on the 1969 Charger’s R/T specifications, with heavy-duty suspension and brakes  and was equipped with either a 440 CID Magnum V8 engine standard or the optional 426 CID Hemi V8 engine, which only 70 of the 503 Daytonas carried. It had a corporate near-twin in the “one year-only” 1970 Plymouth Superbird. 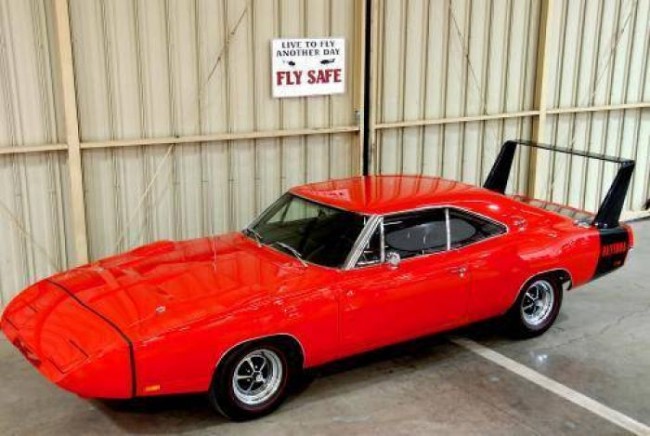