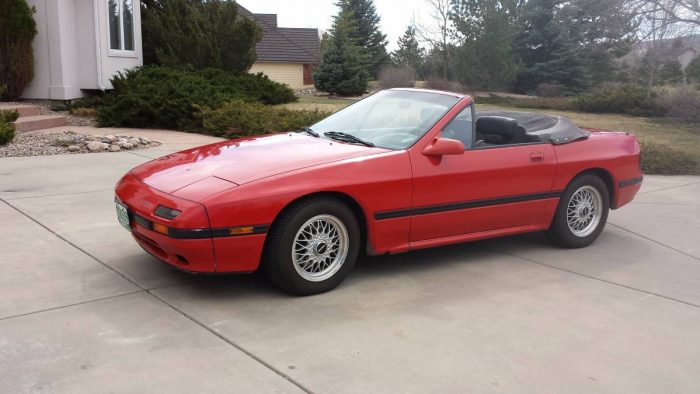 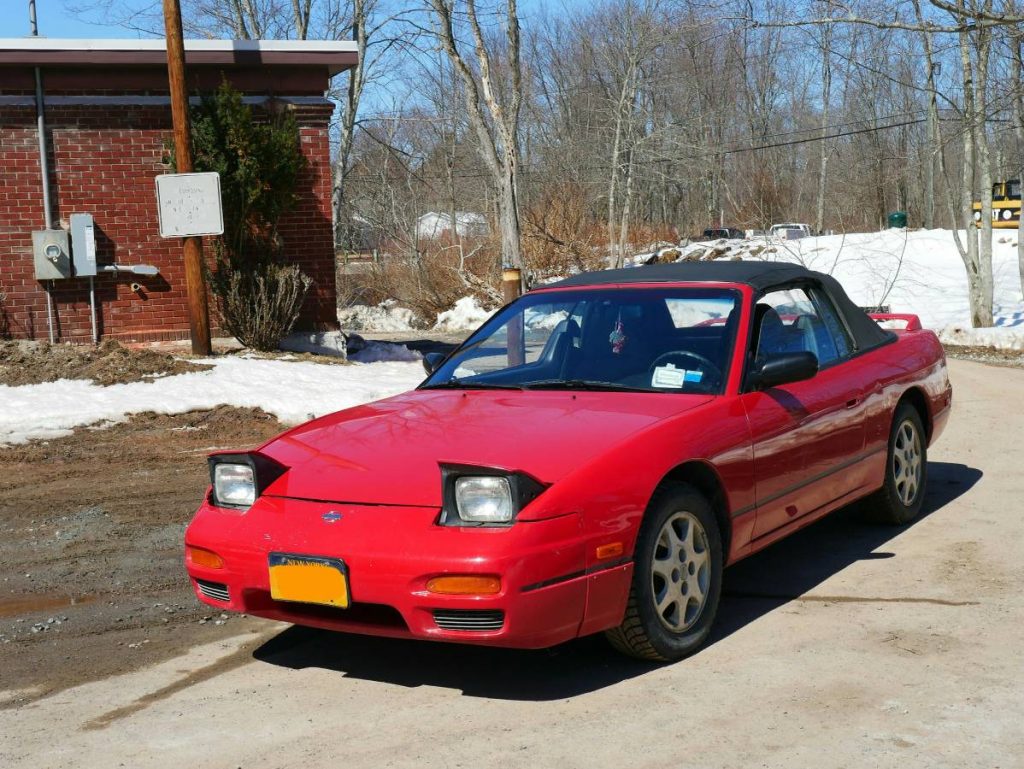 This 240SX is clean. It’s been undercoated for rust, the paint is still very presentable, the interior is decent and, most importantly, it looks like it’s been well maintained. A brake kit, water pump and a battery are just some of the new parts on it.

The Nissan 240SX, as you probably already know, is a great tuner car and is loved in the drifting community because of its lighter weight, agility, decent engine power given its size and the fact that swapping engines is pretty straightforward.

Unfortunately, like all cars, the 240sx does have some cons. Rust is a major issue but luckily this one isn’t losing the battle. It does, however, come with an automatic transmission which isn’t always the preferred option but that can always be changed, especially if you get it at the asking price and have some money left over. This specific 240 does need some care as it has a power steering leak and the AC is out.

Not a lot of work for someone who wants to enjoy a rolling project/cruiser. 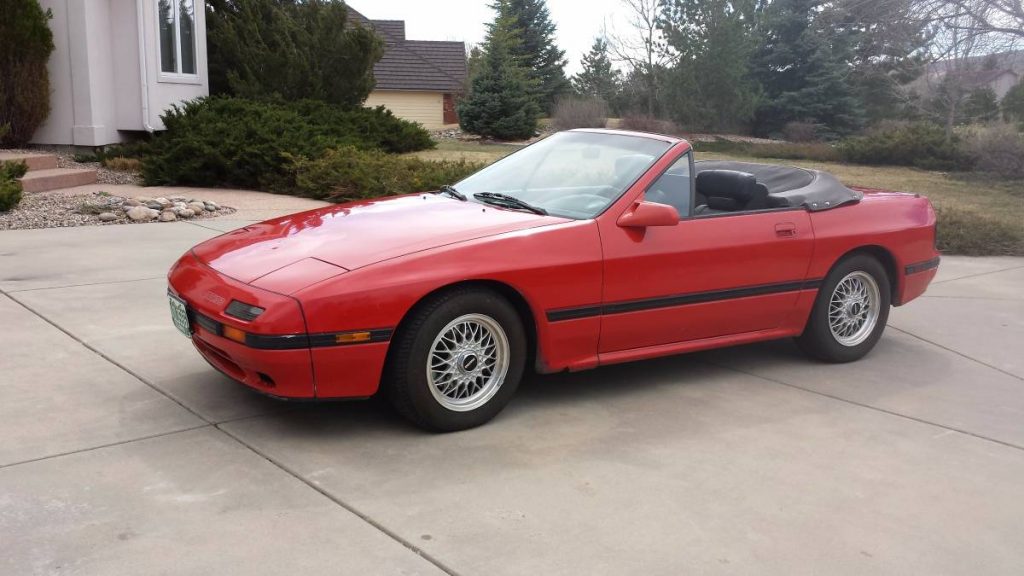 This RX-7 is in amazing condition. Still owned by the same person for the past 29 years. It has 137,000 miles on the original rotary engine and looks gorgeous. The original paint is very clean and the maintenance seems to have been done on time. New parts include a clutch, tires and probably other things but you would have to contact the seller to know more.

It actually looks comfortable and classy for a low-range sports car. The seats have been reupholstered, speakers have been fitted to the headrests and it comes with an optional wind blocker.

The RX-7 is another motorsport icon on this list. It’s a great car for track racing as the rotary engine winds up very quickly and the weight distribution is amazing. This specific one comes in a 5 speed manual and is able to squeeze out almost 150 horses out of a tiny 1.3 liter displacement. That’s a good amount of power from such a small engine but it also leaves space under the hood for future mods in case you need more kick. 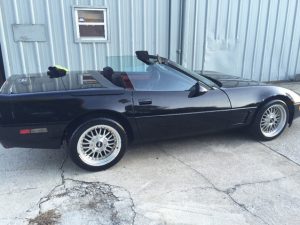 This bad boy is a 1987 Chevy Corvette. This specific one is powered by the famed 5.7 liter Chevrolet “350” L98 variant and has 240 horses but the real number here is torque: almost 350 foot pounds. Power is the one thing this car doesn’t lack.

What it does, however, lack is a good manual transmission. Another vehicle with a slush box behind the engine but still a great cruiser if you’re looking for some top-down fun.

The car does, however, have some issues but nothing too serious. The AC needs to be replaced or repaired and the owner mentions that the leather interior needs to be redone but he is giving some spare seats with the car.

These cars were famous as pace cars on most U.S. tracks for their power output and to lead racecars and restart races. It was also the “it car” for most Hollywood movies from the 80’s including Macgyver. That movie title is pretty fitting, given the fact you’ll be wrestling with that AC system for a little while. 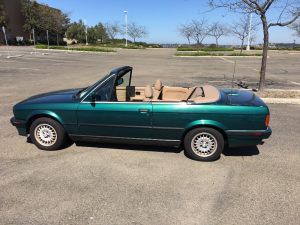 Yes, a BMW E30 made it on here. This exact model is a 1992 318I convertible in Bostongruen Metallic which is one of the rarest colors for an E30. It has almost 175,000 miles on the odometer and sports a 1.8 liter 4 cylinder engine with a 5 speed manual transmission. The engine is called the M42 and, yes, the name sounds like a tank. But it’s probably even more bulletproof. They aren’t neck-snapping quick, but these engines, which use a timing chain rather than the M20’s timing belt system, can last a very, very long time. A well maintained M42 with basic maintenance can last up to 400,000 miles and more. The reliability factor is proven by owners all around the world with many E30’s on the market having clocked over 200,000 miles and counting on their original engines.

This car is also fully loaded including heated leather sports seats, power locks and apparently a “hands free Bluetooth” system. It also has new tires. Great options if you’re looking for a weekend warrior with some modern add-ons. This is one car you can actually use as a daily driver. 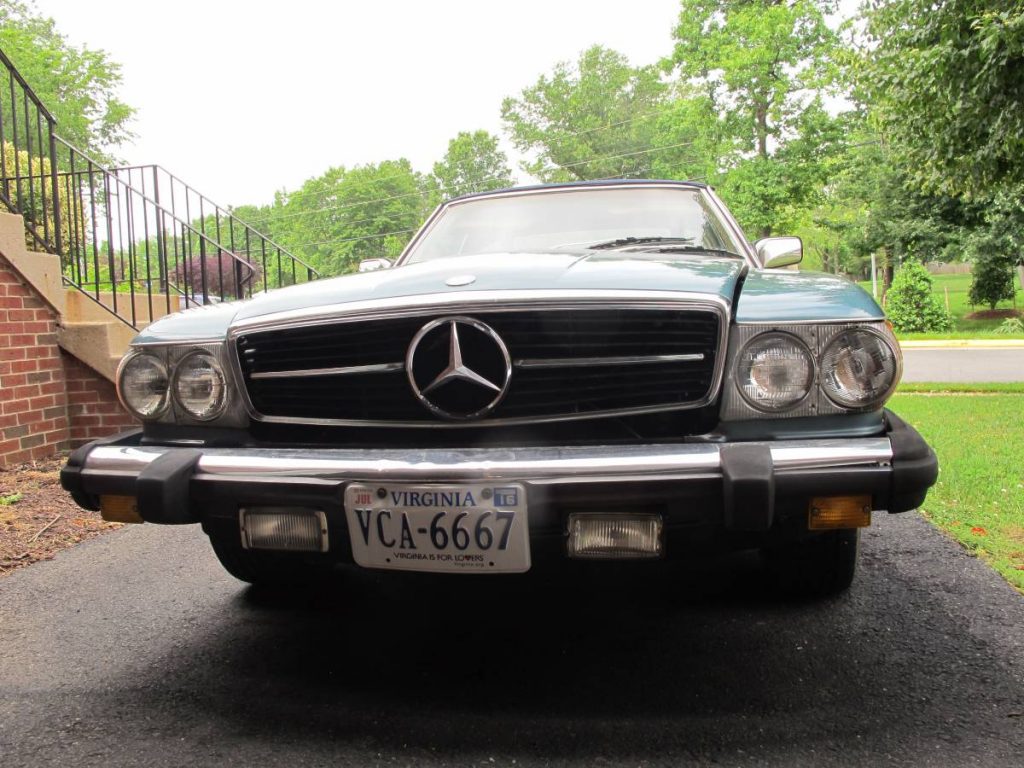 Few cars scream “it’s the 80’s!” quite like the Mercedes SL lineup. The favored car by Rick Wright from Magnum P.I., the 380 SL was the go-to luxury sports car of the rich. Its appearance was more simple than eye-catching as it relied on more straight edges and traditional Mercedes looks including the wide front grill. The 3.8 liter V8 pushed the car to a not-so-impressive 155 horses and almost 200 foot pounds of torque. It wasn’t lightning quick. Adding to that was the fact that the car weighed over 1.5 tons which may not sound like much but it was a lot when compared to its rivals which boasted a lot more power or similar output and weighed almost 400 pounds less in some cases. On the flip side, it offered more cabin space which translated into a much larger interior that included bigger, couch-like seats, adequate leg room and a larger steering wheel and bigger gauges, among other benefits.

None the less, the Mercedes 380SL was a popular choice due to its amazing build quality, its high-end features including optional folding seats, hardtop and even cruise control which, in 1982, were very luxurious options to have.

These cars are prone to a few things failing like any older car. The most notable and most expensive is the timing chain. Check with the owner to see if the double timing chain system has ever been serviced in its life.

The car may handle a little sluggishly if you plan on taking it for some “spirited driving” but the suspension can take most bumps on the road and channels very little back to the driver. It basically rides like a Cadillac without falling apart like one.

This specific Benz has been very well maintained, both inside and out. It comes with both the soft top and hardtop, power-assisted steering, power-assisted windows and even power-assisted brakes. The owner also mentions that it’s had a safety inspection and emissions test done. A pre-purchase inspection would be a good idea with a car of this nature. You don’t want to be caught with some nasty surprises especially with a 35 year old Mercedes. But, if it passes your criteria, this is definitely the best car for some all-around open top cruising near the beach.

This list was built purely off the starting price mentioned in these ads. That being said, it’s always a good idea to budget that you might have to put over half the car’s initial price in extra repairs. These cars may not always be advertised in the condition they are actually in. Whatever car you buy, make sure you check it out thoroughly, ask a friend who is more mechanically inclined or get a pre-purchase inspection done. It’s always worth the peace of mind so you can really enjoy your convertible this season.


The Best of 2021 Kia
Watch A Toyota GR86 Drift Around an Abandoned Mall
TOP 15 Fastest Ford Models of All Time
Factory-Lifted: 2022 Subaru Outback Wilderness
10 Best Used 600cc Motorcycle Models You Can Buy
2021 Hyundai Santa Fe Calligraphy: A Lot of Luxury with a Fe...