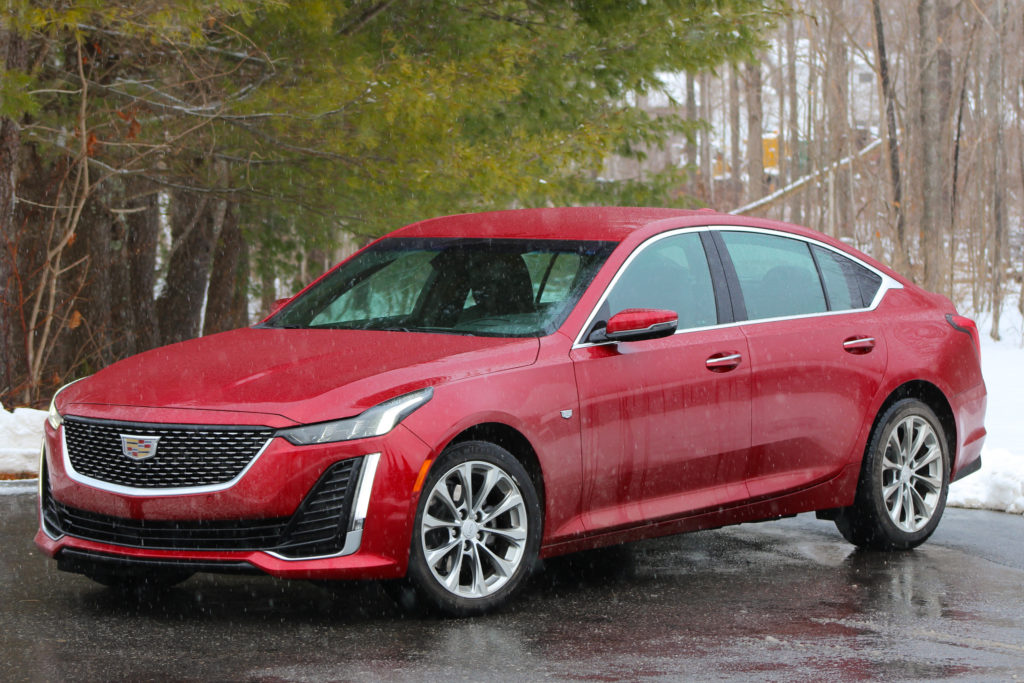 As a collection of numbers on paper, the 2021 Cadillac CT5 Premium Luxury AWD reads like a sports sedan. In motion, the car stumbles the line between “new-money performance-luxury” and old-school American opulence. It’s a comfortable car with a handsome interior, but its sporty leanings bring stiff seats and a sometimes finicky ride.

I lived with my grandparents growing up, and when I was in elementary school, my grandmother bought a 1976 Cadillac Fleetwood Brougham d’Elegance from a friend down the street. Twelve years later, I got my own car, but occasionally I’d have to slide behind the wheel of the Cadillac. Acres of black crushed velvet, fancy plastic-wood, and the ‘measure-gallons-per-mile’ 500 cubic-inch V8 weren’t all that exciting to me at first. It wasn’t until quite a few years later that I realized how special that car really was. The sensation of floating, combined with several cubic yards of interior space, was pure, old-school American “luggshury,” as my grandmother would say.

Sadly, with the automotive world’s current tendency to believe every car needs to be at least a little bit sporty, no vehicle has come close to the experience of driving that old Caddy since. The 2021 Cadillac CT5 I tested over the recent holiday break didn’t come close either, though I’ve got to give it credit for trying.

This Is Not Grandpa’s Caddy 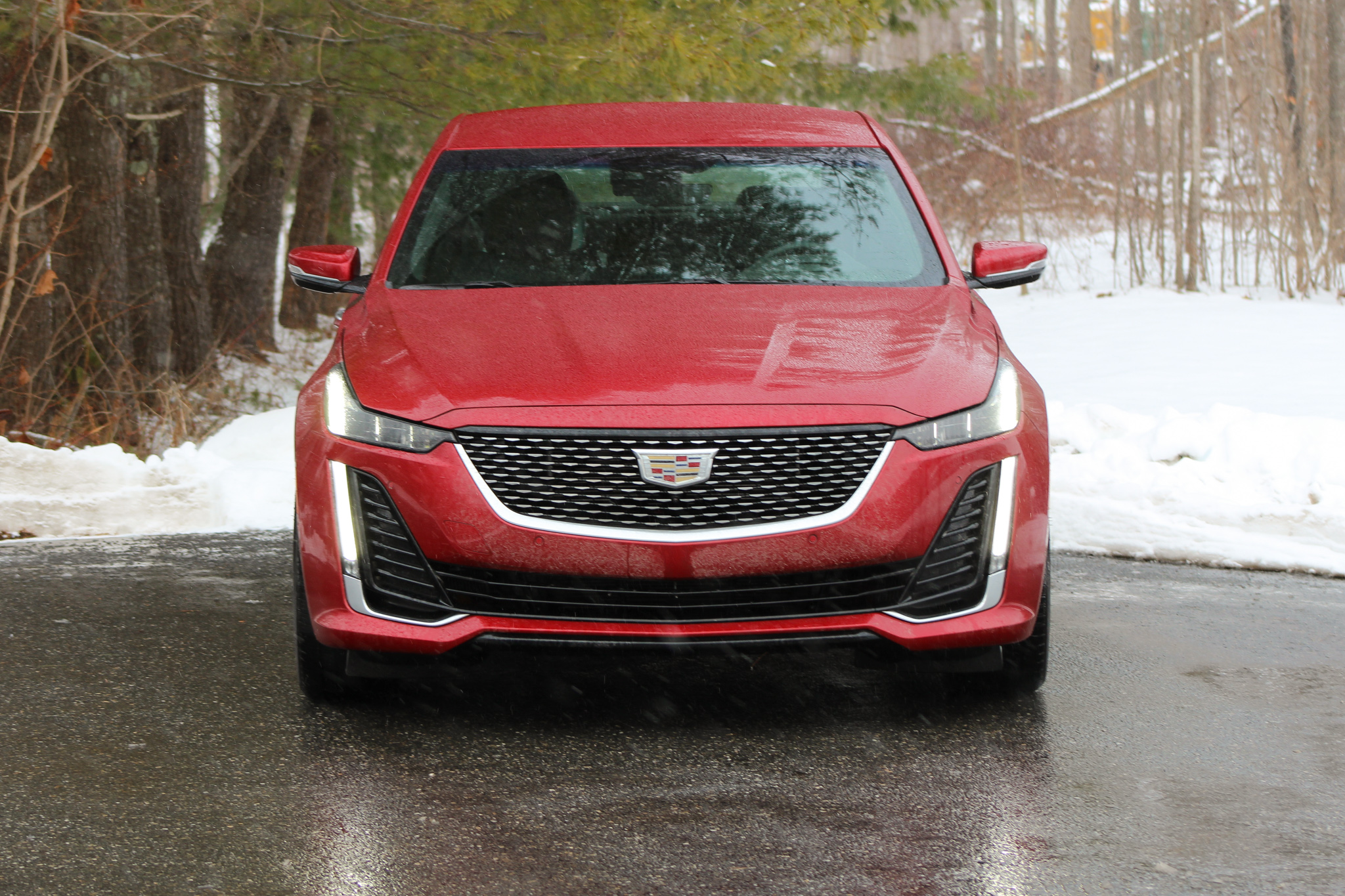 Ride quality and driving experience are where new Cadillacs diverge most noticeably from their ancestors, and the CT5 is no exception. The Premium Luxury trim doesn’t get the advanced Magnetic Ride Control or performance suspension system that the CT5 V-Series has, but its independent MacPherson Strut and five-link rear suspension do a remarkably solid job at keeping the car’s 3,802 pounds in check. The setup is more than capable of soaking up imperfections and rough roads, but it doesn’t make the CT5 the sublime chariot that Cadillac flagship sedans from prior decades were. The ride quality, combined with the CT5’s firm seats, makes for a sometimes jostle-filled drive.

Upscale Interior With A Few Stumbles 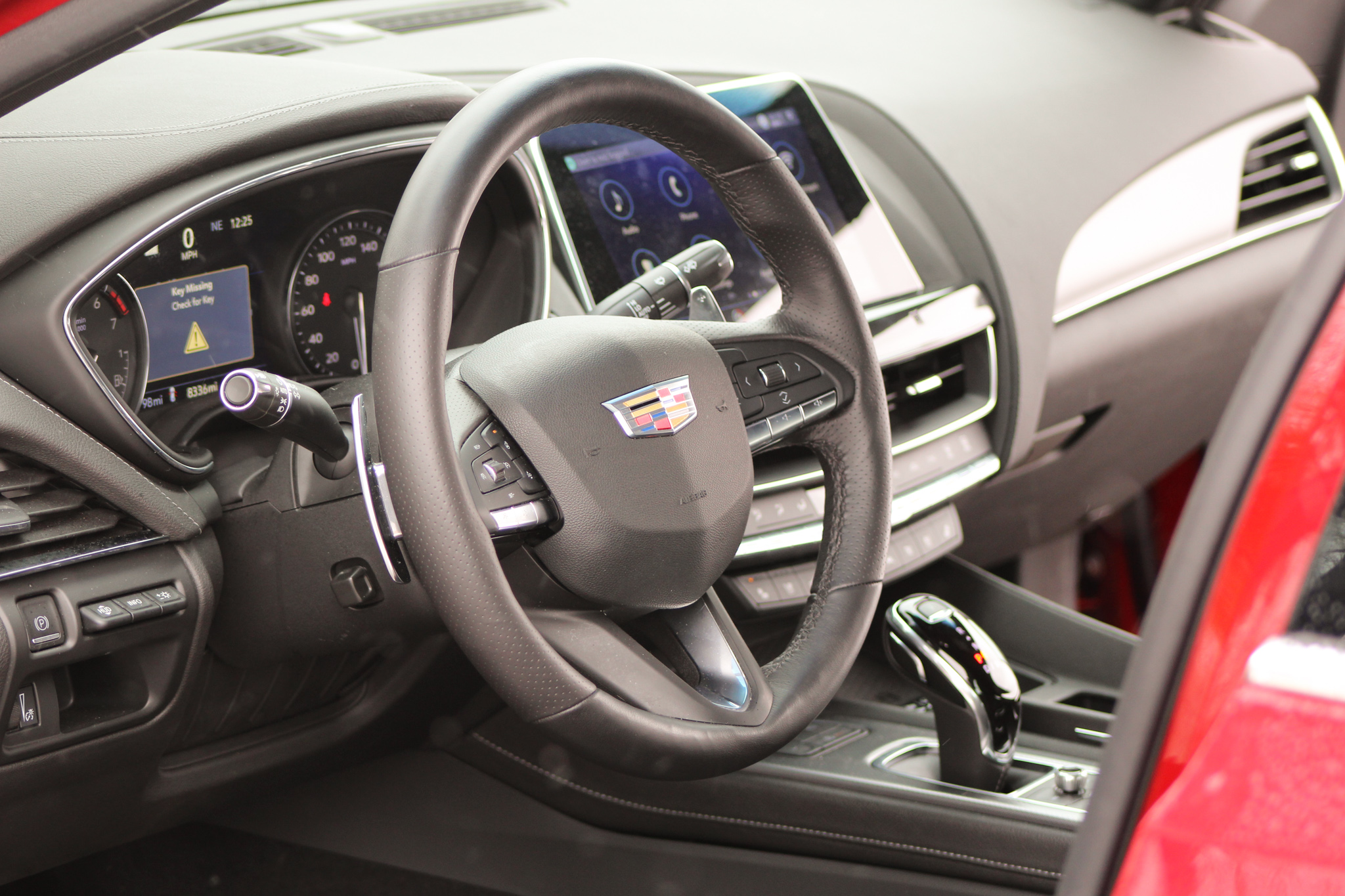 The 2021 Cadillac CT5 Premium Luxury’s interior trimmings are impressive, but are framed with hard black plastic in many places. Open-pore woods and soft leathers meet with plastics that feel hollow and cheaper than expected for a Cadillac. The front seats are wide and deep, but could use more padding and support, especially in the lumbar, where the wide seat back makes it difficult to find good support. The Premium Luxury trim can be equipped with both heating and ventilation for the front seats, which makes acclimating to a cold winter’s morning much more pleasant.

The rear seats are a bit more generously padded, but the headroom suffers from the car’s prominent sloping roofline. There’s more than plenty of legroom for adults to stay comfortable on longer trips, but the lack of headroom will cause issues for taller adults. The good news here is that car seats easily fit in either outboard rear seat. The bad news is that lifting a child into a car seat is difficult because of the low roof and even lower door opening. 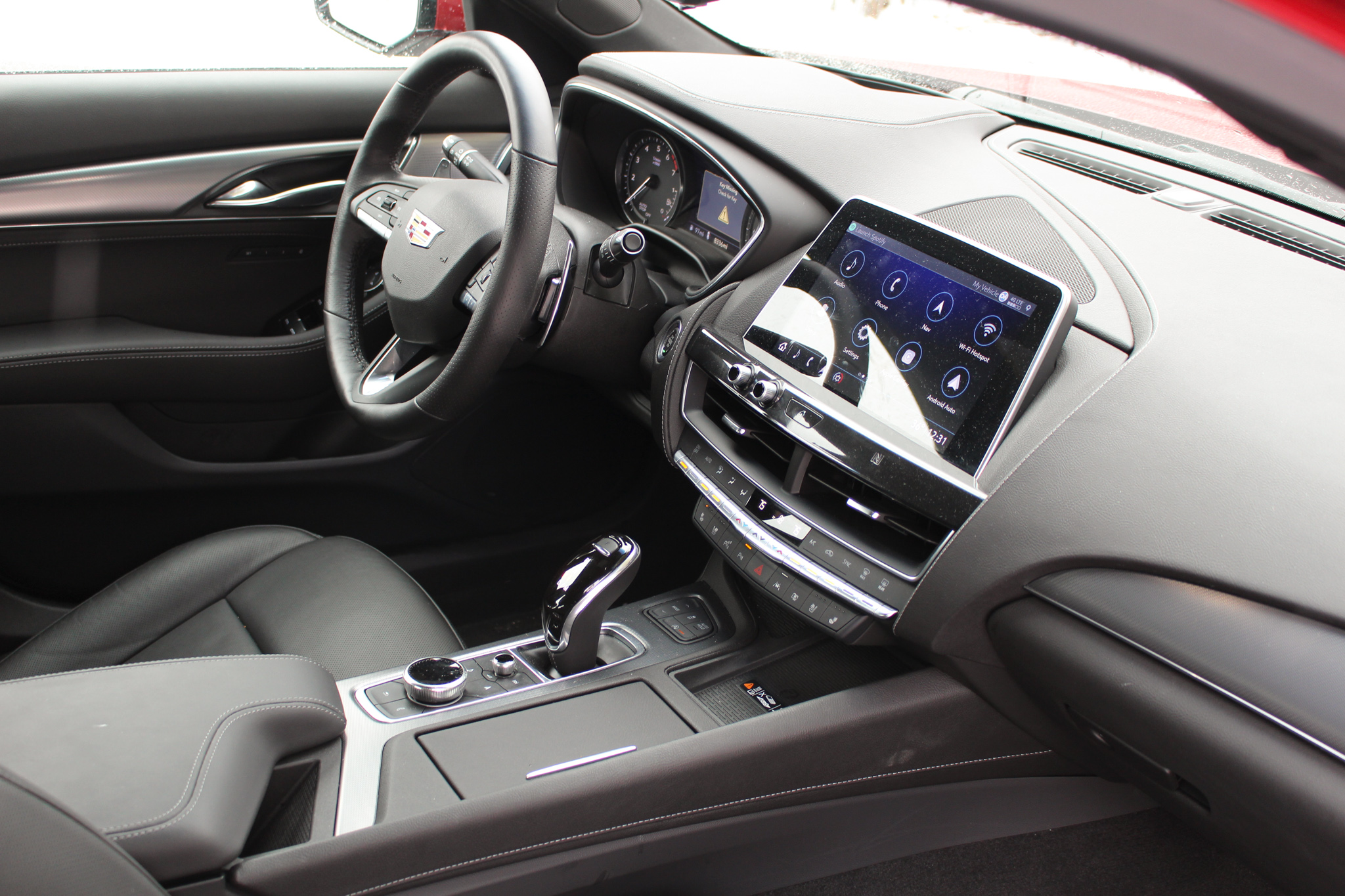 The Cadillac User Experience infotainment system, also known as CUE, has had its ups and downs over the years, though to be honest there have been more downs. Early versions were clunky and hard to use, especially when driving a vehicle. The latest version of the software is greatly improved over its predecessors and runs excellently on the 2021 CT5’s 10-inch touchscreen. It’s much easier to navigate when the vehicle is in motion and offers standard Apple CarPlay and Android Auto functionality. My test car also came equipped with the optional head-up display, 8-speaker Bose audio system, and wireless smartphone charging.

(If you want to see truly impressive infotainment systems have a look at the latest Mercedes Hyperscreen and BMW iDrive.) 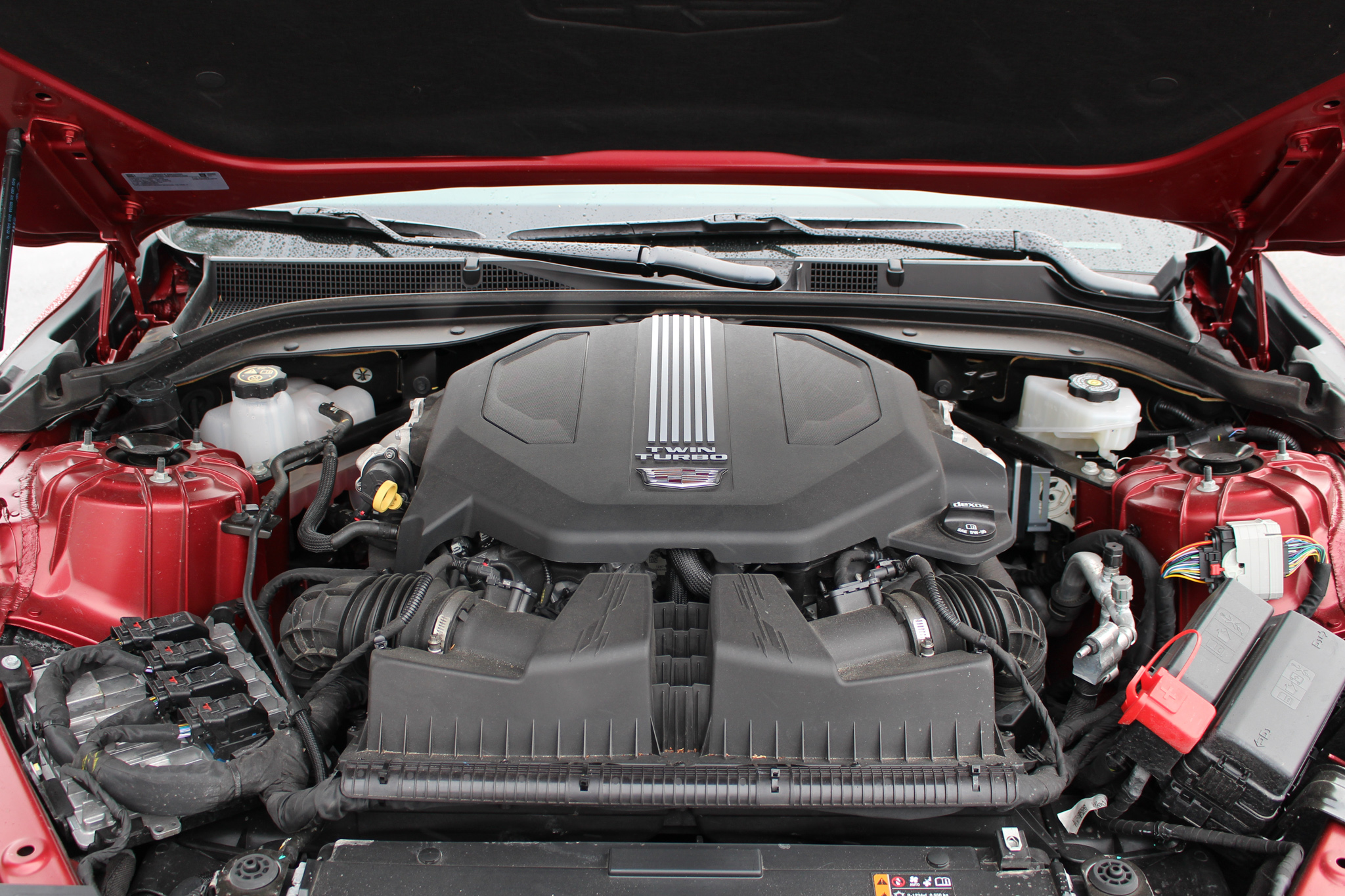 By default, the new Cadillac CT5 leaves the factory with a turbocharged 2.0-liter inline-four, but my tester came packing the optional twin-turbocharged 3.0-liter V6. The larger engine produces 335 hp and 360 lb.-ft. of torque – a significant upgrade over the base mill’s 237 hp and 258 lb.-ft. of torque.

The V6 is also equipped with cylinder deactivation tech that shuts down 2-cylinders to conserve fuel, and both engines come paired with a smooth-shifting 10-speed automatic transmission. The car is enthusiast-friendly out of the box with standard rear-wheel-drive. Our 2021 CT5 tester came with the optional all-wheel-drive system, however.

When asked, the V6 engine is more than happy to be driven hard, but it’s much more at home in gentle cruise-mode. A healthy stomp of the throttle leads to a swell of acceleration that’s not all that different from a rowdy takeoff in a speedboat, in both feeling and sound. The car’s sound deadening mutes the worst (best) of the engine’s fury and the slight turbo lag means there’s a big push of power a few-thousand rpm into the tachometer. 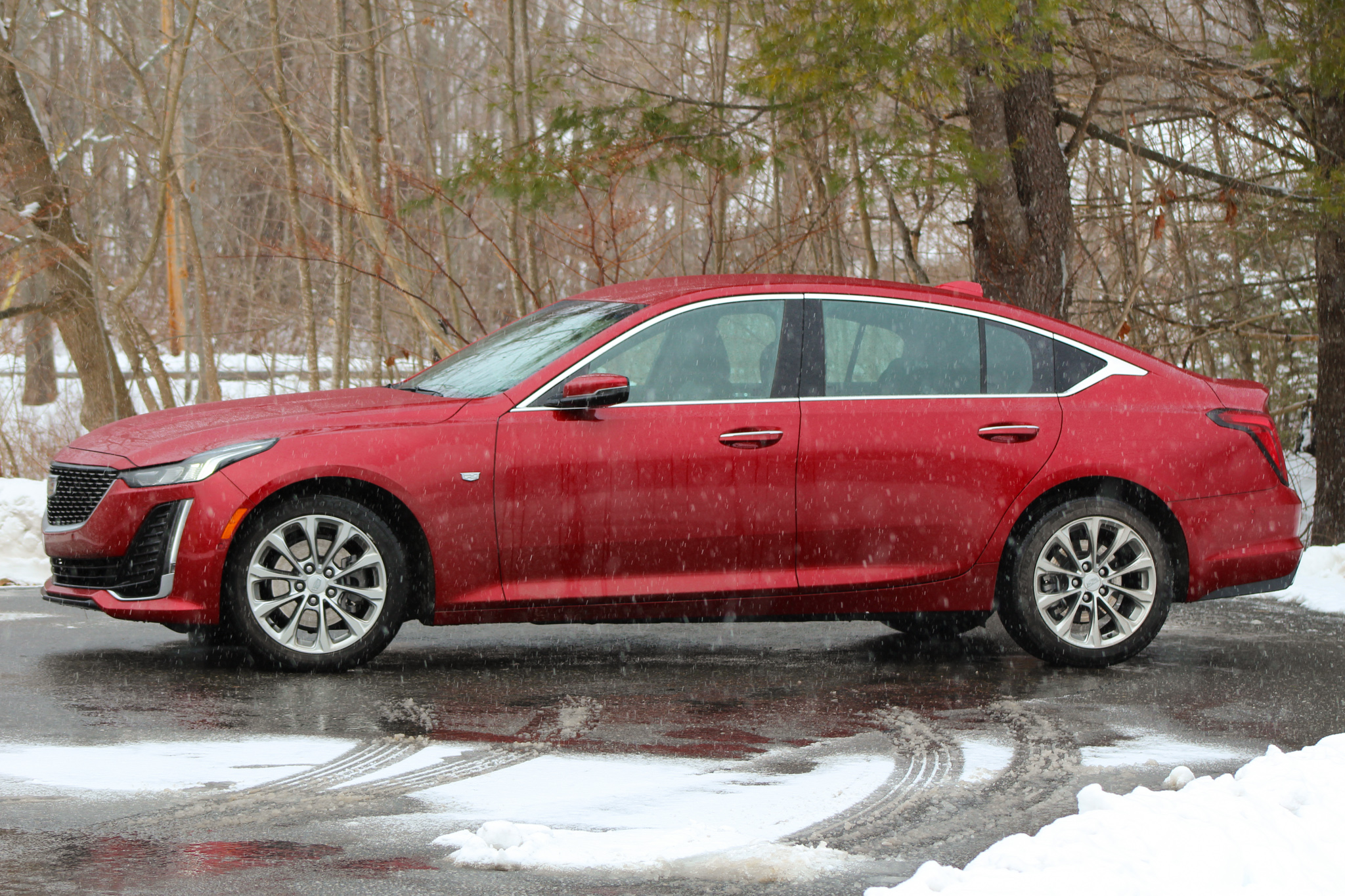 The engine features a cylinder deactivation system that essentially turns it into a 4-cylinder for fuel-efficient cruising. The handoff between 4 and 6-cylinders is fairly seamless, but the gearbox seems to drag when it’s running 2-cylinders down. The transmission latches onto higher gears, which leads to a lugging sensation and a sluggish time getting up to speed. Of course, the extra 2-cylinders are just a punch of the throttle away, but a recalibration of the transmission programming would do wonders for smoothness.

The 2021 Cadillac CT5 is quick without a doubt, but it’s not mind-blowing. The run to 60 mph from a standstill takes a little bit more than 5-seconds, which is good for plenty of laughs and makes the car a pleasure to drive around town. Moving the big Cadillac in and out of traffic is a breeze, and reaching highway speeds is an effortless task.

Is This a Premium Luxury Cadillac? 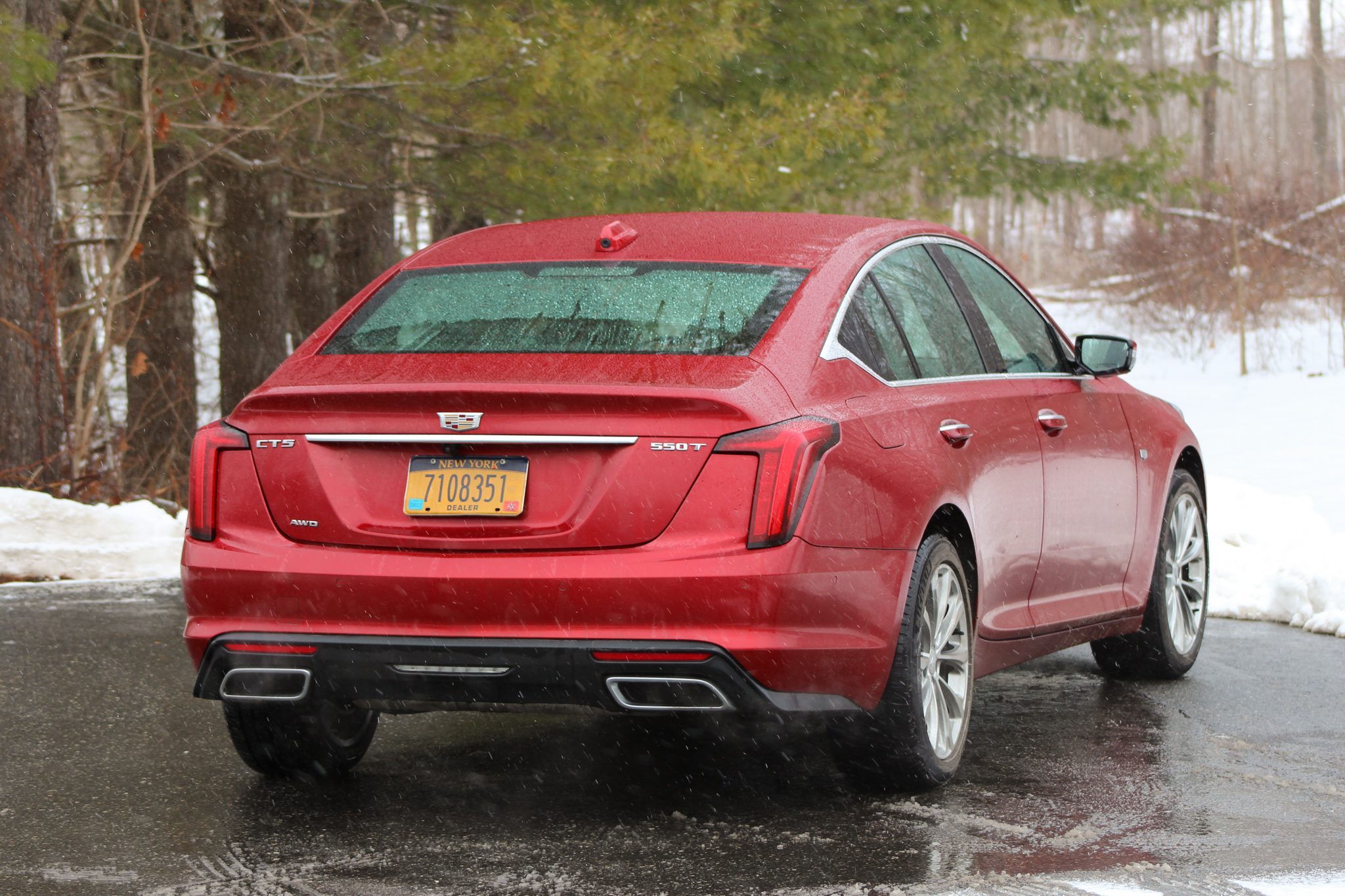 The interesting thing about driving any modern Cadillac while trying to compare it to a memory of their ancestors is the fact that there is no comparison to be made. The brand has taken an interesting path over the decades, as its most recent vehicles retain very little of the character that they originally became famous for. That’s not to say that the CT5, or any other new Cadillac, is bad. In fact, the opposite is true in most cases, but it’s impossible to deny that new Cadillacs are built with a completely different mentality than the cars we saw even as recently as the early 2000s. That’s not to say that I’m pining for a return of gigantic cars with questionable handling and safety. It’s just to say that few other automakers have made such a radical departure from their beginnings as Cadillac has.

Whether or not the 2021 Cadillac CT5’s $43,790 base price ($58,765 as-tested for Premium Luxury trim, AWD, and options) is worth it to you will depend largely on your brand loyalties, instead of the car’s virtues. This Cadillac has many of the same features as its European and Japanese rivals, but its mixed-up driving experience and “kinda luxury, kinda sporty” attitude won’t be for everyone.

To find your nearest dealer and/or virtually build out your own 2021 Cadillac CT5 be sure to click HERE.


The Best Cars of 2018
15 Rare American Muscle Cars We Don't See On The Roads That ...
Mustang Baja Off-Road Racer Is An Idea So Wrong It Is Right
10 Best Hot Hatchbacks Of All Time
BMW Activehybrid 7 Review
The 7 Least Popular Cars Ever