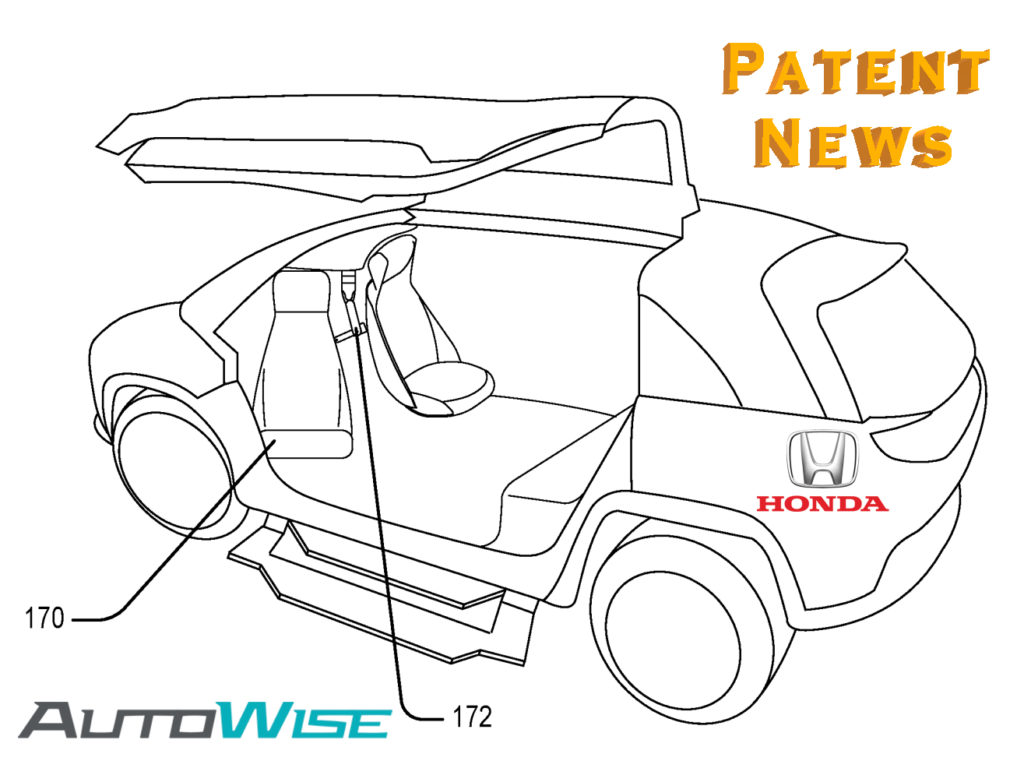 Honda’s latest high-tech car design patent involves an awesome massive single gullwing door, a robot arm, retractable side steps, and swivel seats integrated into a future autonomous car. Does this Honda patent give us a glimpse into our autonomous car future? We hope so!

Autonomous vehicles are coming, and they’ve already taken a decent market share since Tesla has been putting pressure on everyone else. I have the pleasure of reading numerous automotive patents before I find something interesting to write for you folks, and I can say that a massive percentage of patents coming out these days relate to autonomous driving. Many released documents relate to anti-crashing systems, while others relate to lane guidance. There’s a great chance that in my lifetime I’ll own a car that will, at least, have the option for autonomous driving. It’s crazy to think about for me, as my current newest car is 25 years old.

The basic process for autonomous driving involves three primary components; visual sensors (LiDAR, RADAR, etc.), fancy computers with magical algorithms to do calculations, and servos/motors to act on what the car is seeing and what the car is calculating as a necessary action. In effect, it’s an active system, and all active systems need these three components to function. In an example scenario, when a car ‘sees’ another car stop in front of them, the visual sensors detect the location of the car, the computers calculate an optimized rate of deceleration for your car based on the deceleration of the other car, and the servos apply the brakes to stop the car as best as possible to avoid a crash.

Just like autonomous driving, this system involves the same three high-level components. Honda has pressure sensors in a set of steps, a fancy computer to determine where an autonomous arm should be located in the path of ingress/egress based on the pressure to the steps, and tiny motors in the arm to position it to help a passenger into the car.

There are a few interesting features in this document. First and foremost is the car itself. Honda is showing a new car that I’ve never seen before, which they state is an autonomous car. It’s pictured with a single massive gullwing-style door, but the document says there can be more than one door. The reason this door is designed like this is because:

…the door may open vertically, which may provide a larger doorway than a horizontally opening door. The doorway may allow passengers to more easily enter or exit the vehicle.

This car looks like it’ll be some kind of smaller CUV, like a CRV, Pilot, or a Passport.

The intended novelty of Honda’s new car is the combination of both a rotating seat, which can face the doorway for both getting into and out of the car, and a very-helpful robotic arm that travels along the path of a person getting into and out of the car. Like I said, this hasn’t been granted yet, so the granular novelty may change in the future as prosecution continues.

I wouldn’t say this is patent is addressing a problem, but rather Honda seems to be thinking forward and developing a system for future autonomous cars. The document states a typical car has fixed, forward-facing seats, which may not be necessary in an autonomous vehicle. I can’t disagree with that statement. Why do we need fixed seats if someone else is driving? 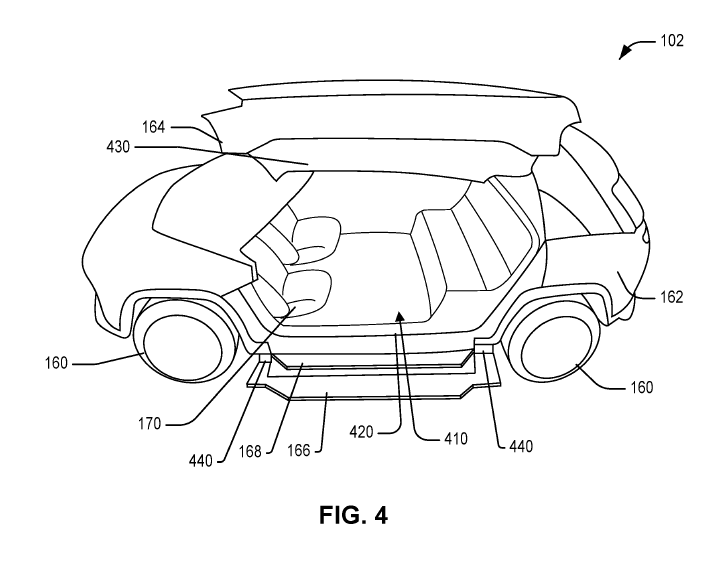 First, we’ll start with the seats. FIG. 4 is showing a single bench-style seat in the back, and Honda doesn’t state anything about it. It doesn’t really matter because it’s the front seats that are where they’re focusing. The front seats have the ability to rotate, which isn’t new. That’s been used in Sprinter vans for a long time, and even been used in the Dodge Custom Royal in the ’50s.

Honda’s proposed seats will automatically rotate when the door is opened.

Then, Honda have two automatic steps that will extend to assist the passenger in getting into the car. These are also shown in FIG. 4 as components 166 and 168. Again, automatic steps aren’t new. Most trucks these days come with this style of step due to the height of new trucks. Extending steps aren’t that interesting, but it’s the way Honda is using them that’s interesting. We’ll get into that later. 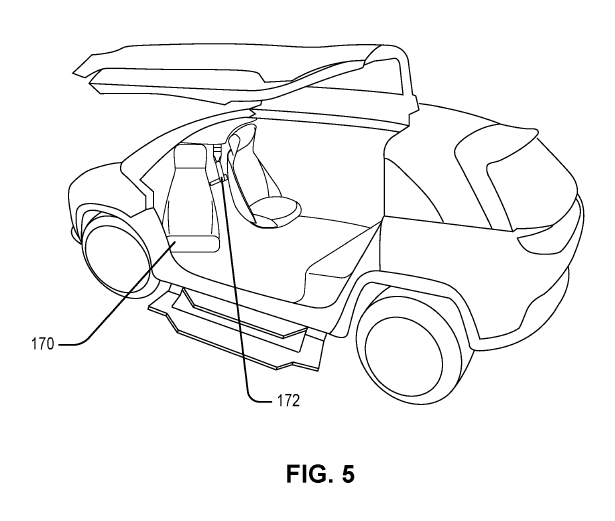 Next, we have the weird part of this new car – the robotic arm. FIG. 5 shows the arm (172) in the car, which sits between the two front seats and hangs from the ceiling. The reason for this particular design is to help passengers into and out of the car, functioning as an effective automatic handrail from the steps to the seats. When the arm is in use, Honda say it will travel along an ingress and egress path to the steps. I’m unsure if this is predetermined or if you’ll be able to change the path if you own the car. 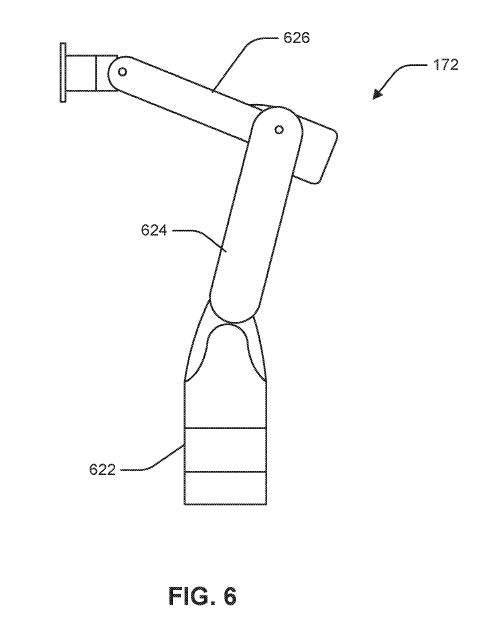 In the end, Honda states the process to get into this car as follows. First, the door is opened. Then, the bottom step is extended toward the ground, so the passenger can take their first step up. Then, the system will automatically rotate the seats to face the doorway. The robotic arm will then extend along an ingress/egress path toward the door. A second, higher, step will then extend so the passenger can take a second step. That part seems strange. Why not just extend both steps at once, but that’s beside the point. Then, as the passenger steps on each step, the height of the robotic arm is adjusted based on the pressure applied to the steps. Then, you take a nice sit in that comfy seat and tell the car to take you to the bar, because you’re not driving home.

Lastly, I found an interesting section of this patent application that has little to do with the main intent. It could suggest another new idea coming from Honda.

It states that the seat can be filled with pneumatic (air) bladders and inflated and deflated as needed. Honda says this will reduce the weight of the car and can change how the seat will feel to the passenger. I’ll keep an eye out if Honda tries to file a patent for this concept.

…using the collapsible seat assembly described herein in a vehicle may result in a lighter weight seat assembly than fabric seats conventionally used in vehicles… the one or more pneumatic bladder members can allow for (e.g., by inflating/deflating bladder members) functional changes to the seat assembly, such as a wider but open seat for luxury feel, a tight deep seat for a sporty feel, etc.

It sounds like this car is literally inviting you inside. “Yes, please come in. Here’s a step, and here’s a robotic arm to help you in. I’ll even turn the seat backward for you”. This is some real Jetsons stuff, and at the rate cars are developing right now, I’d bet this isn’t too far away from reality.

I’m going to throw some conjecture at you and say the purpose of this is explicitly for older generations. I’d also say this is probably going to be an add-on feature for those that have trouble getting into and out of a vehicle. It looks extremely expensive and I can’t imagine people using it that don’t actually need it, unless you just like robots serving you.

Most importantly, are we seeing a shift in car design based on the actual driving method of the car? Honda states many times that this design is because the car is autonomous. They don’t say anything about the seat rotating backward during autonomous driving, but we all know that’s what we’ll use it for so we can have a little tea party, serious business meeting, and/or play with our kids. If the car is driving itself, we don’t need to look out the windshield, right?