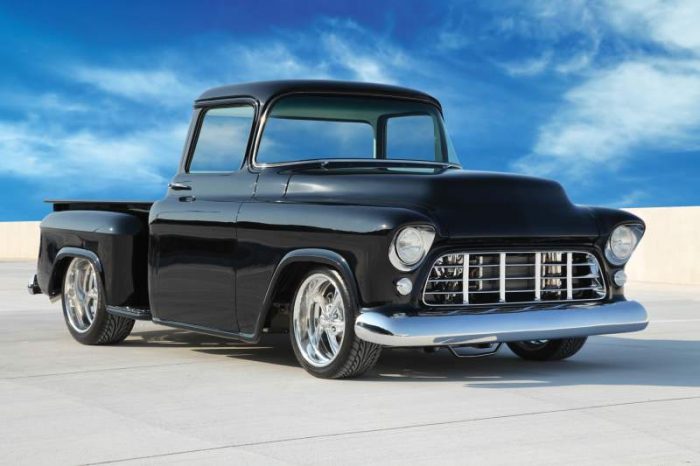 This year, Chevrolet celebrates 100 years since they began truck production. They even prepared two special editions of the latest Colorado ZR2 to mark the occasion. However, Barrett-Jackson compiled something far more interesting than spiced up Colorado ZR2s. They compiled a list of most expensive Chevrolet trucks ever sold on an auction. In fact, Chevrolet teamed with Barrett-Jackson to compile the list.

“Vintage trucks, especially Chevrolets, have been gaining popularity with collectors, to the point they are rivaling muscle cars,” commented Craig Jackson, chairman and CEO of Barrett-Jackson.

“What’s interesting is collectors are looking for very different vehicles: The most collectible muscle cars are numbers-matching survivors; the most sought-after vintage trucks are full custom builds, and buyers are looking for both unique design elements and high-quality craftsmanship,” Jackson added.

We’ll start with the number nine and work our way up; it’s worth it.

This is the 1971 Chevrolet C-10 Custom Pickup called “Adel”. Sold for $110,000 in Scottsdale, Arizona, in 2014, the truck features a fully customized chassis, awesome Chevrolet Performance LS3 E-ROD with 430 hp and a belonging transmission and controller kit. 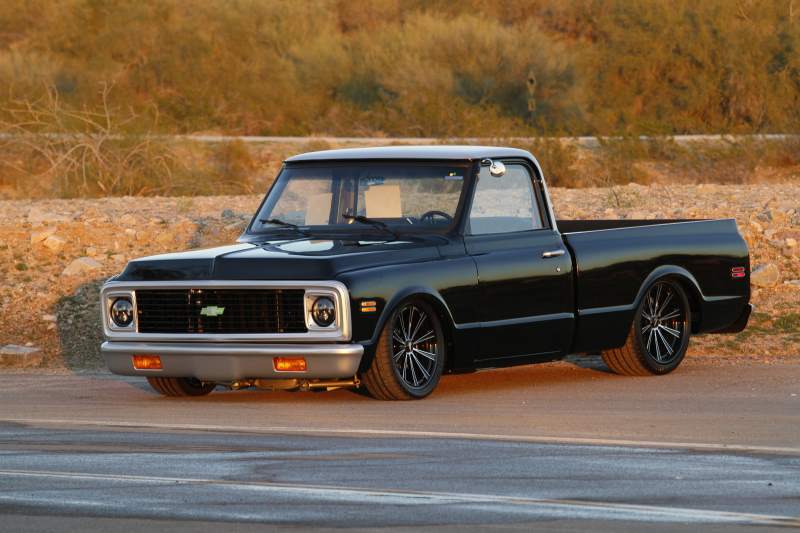 Most notably, Adel (a Scandinavian term for nobility) takes us into the world of air ride suspension. In this case, it’s provided by Ridetech. Also, Chevy notes the BeCool radiator system and Goodmark Industries body panels.

It is not even a surprise that such a fine machine found its buyer for a not-insignificant $110,000.

Also sold in Arizona, this 1959 jewel was built from the ground up. With only the body of the original 1959 Chevrolet 3100 pickup being preserved, this 1959 3100 Custom Pickup takes the rest of its hardware from the modern parts bin. In that regard, the car received high-strength architecture with a four-link suspension setup. 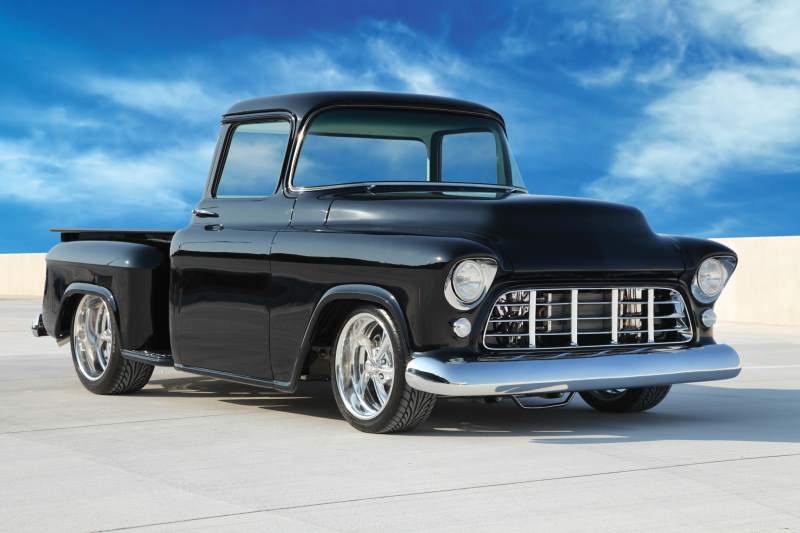 The inside has been upholstered in white leather, making the car feel even more luxurious and allows it to stand next to modern pieces. As for the drivetrain hardware, Chevrolet noted the “9-inch Currie rear end with 3.70 gears and a Detroit Tru-Trac differential”.

It ended up in Florida, but not before massive mods enveloped it. This 1960 Chevrolet El Camino Custom Pickup received a full makeover with Mist Opal Green Metallic and Desert Silver Metallic with Dark Red accents. Obviously, a car only a handful lucky ones would consider buying. Apart from the “laser-straight” body, the 1960 El Camino Custom features a 502 hp GM ZZ 502 Ci crate V8 with a Ram Jet fuel-injection system. 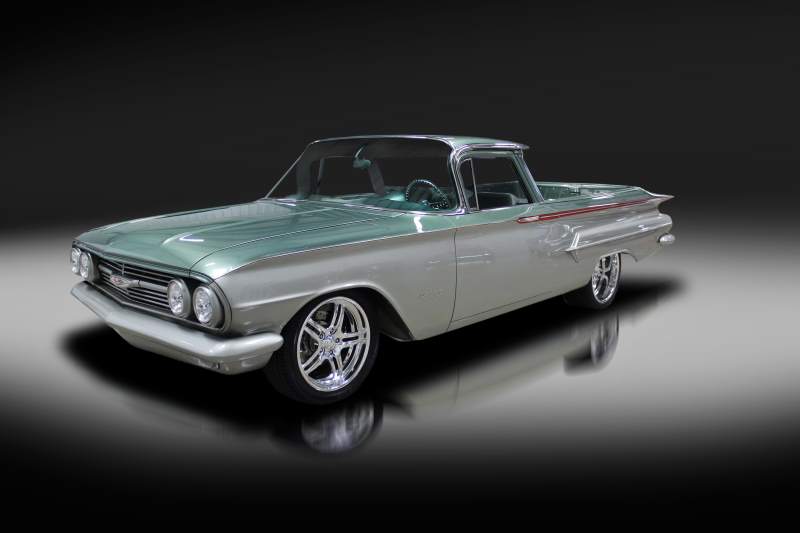 It’s quite a stunner with its planted feel; it sits quite comfortably on new 18″ front and 19″ rear Boze Chicane polished wheels. A fully custom interior and exterior hide rather comprehensive work on the drivetrain and undercarriage which, among other things, received a custom reinforced chassis, custom upper and lower control arms, a 4-link rear, air ride shocks and more.

One curious fact: the car features Mercedes-Benz bucket seats and some other important cabin pieces. After all, it has to be comfortable and luxurious.

Sold in 2006, this particular 3100 Custom Pickup may be one of the most opulent and ostentatious ones ever built. It was an expensive piece of automobilia back then, and rightly so. Six years of customization peaked with the Kandy Orange exterior and full custom body. It is wide, mean, low, and rather vigorous in its appearance. It’s no wonder this dashing character made the front cover of six different car magazines in the country. 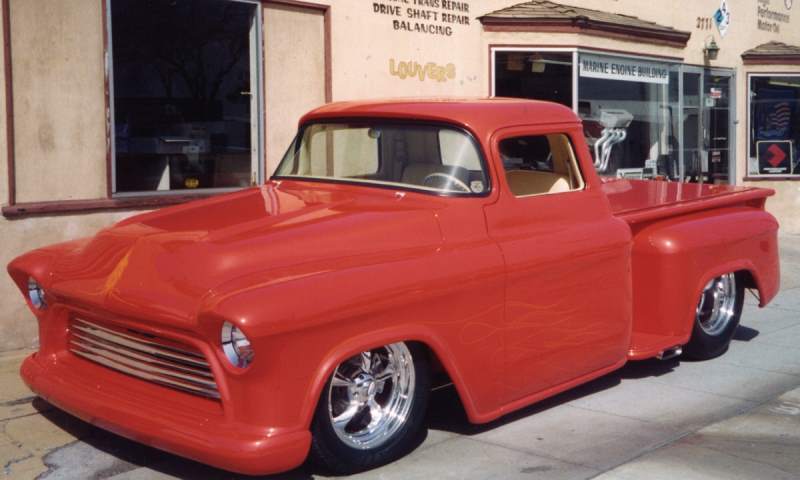 This pickup was built by Cimtex Rods in Jarrell, Texas. It earned Goodguys Truck of the Year 2002-2003, Boyd’s Pro Pick, and numerous top awards at ISCA events and Super Chevy shows. In fact, it was considered by some to be the best pickup of the decade.

Just look at it. Not surprisingly, it ended up in Arizona.

Interestingly enough, the 1955 Chevrolet Cameo Custom hit the auction block all the way back in 2013, but only a year after, it found itself up for grabs once again. In 2013, it sold for $143,000, while a year later, it sold at an $11,000 discount. Someone needed money, obviously. Nevertheless, the car is a proper custom pickup thoroughbred with a Titanium Grey and Lipstick Red exterior. 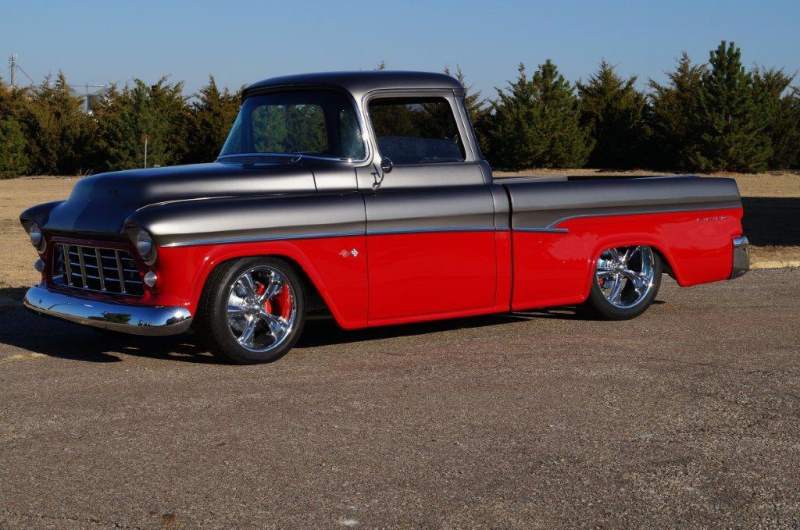 A keen eye may notice some rather cool touches on the exterior, such as a tailgate inspired by a 1955 Nomad, and side panels looking strikingly similar to the BelAir. Obviously, this is a cool piece of engineering only additionally improved by the Dakota Digital VHX gauges, a graphite-wrapped Billet Specialties wheel and a Kenwood stereo system inside.

After winning a GM Design award at SEMA 2009 and a Mothers’ Choice Award at SEMA 2010, this 1957 Chevrolet C-6 Custom Pickup hit the auction block. The awesome piece of custom design was showcased at an auction in Las Vegas in 2011, where it reached a price of almost $150,000. This one is an absolute stunner in black. 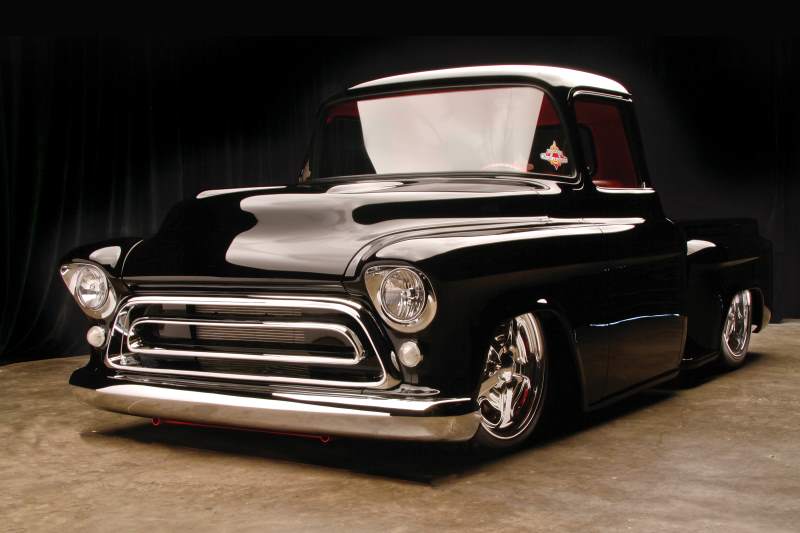 With a 402cid LS3 motor, Corvette C6 suspension with Air Ride installed, the C-6 Custom Pickup also feels like a proper performer. Yet, the pickup has been built for something else. Handcrafted features took more than 7,000 work hours to build. With that much labor involved, I am not even surprised it comes with such a steep price.

We have another Cameo. The third most expensive chevy truck ever sold at an auction is a heavily modded 1957 Cameo with big block Chevy engine, massive stereo system and exceptional orange body. No one can pass unnoticed in it. Especially considering the sound of its 500 hp V8. All of that power is transferred to the wheels via a 400 transmission with Electric Overdrive. 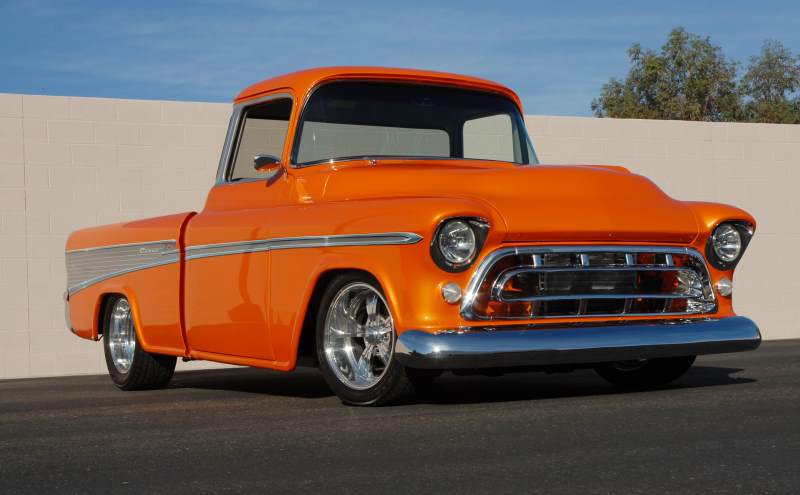 This Cameo also reached Arizona back in 2007 for just under 160 grand.

The truck has been finely equipped with an air-con, leather and some other important luxury touches for the world of today.

It is a beautiful metallic silver-purple and the second most expensive Chevy truck sold at auction. The 1950 Chevrolet 3100 Custom Pickup made an appearance at last year’s SEMA show. However, only a few months after the unveiling, the 3100 found its way to an auction block. It found its way to Arizona, which apparently is the state most obsessed with expensive Chevy trucks. 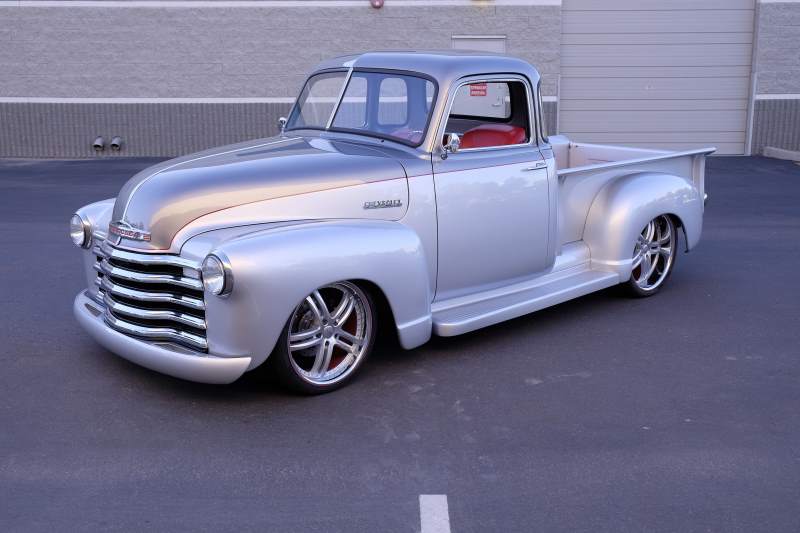 The build process lasted for months and it included astonishing interior work including the addition of “a reshaped dash and a handmade redesigned bench seat, console, door panels and headliner.”

And this is the winner. At least, for now. Again, we are looking at a Chevrolet 3100 Custom Truck. This time from 1957. The truck, known as “Quicksilver,” hit the auction block in 2016 when a buyer from Arizona (surprise, surprise) purchased it for $214,500. It is a hefty price for this kind of vehicle, but according to some experts, this 3100 is possibly one of the best custom pickup trucks ever imagined. In fact, Hot Rod Garage in Sand Springs, Oklahoma, who built it, made almost all the pieces by hand. Including the body panels. 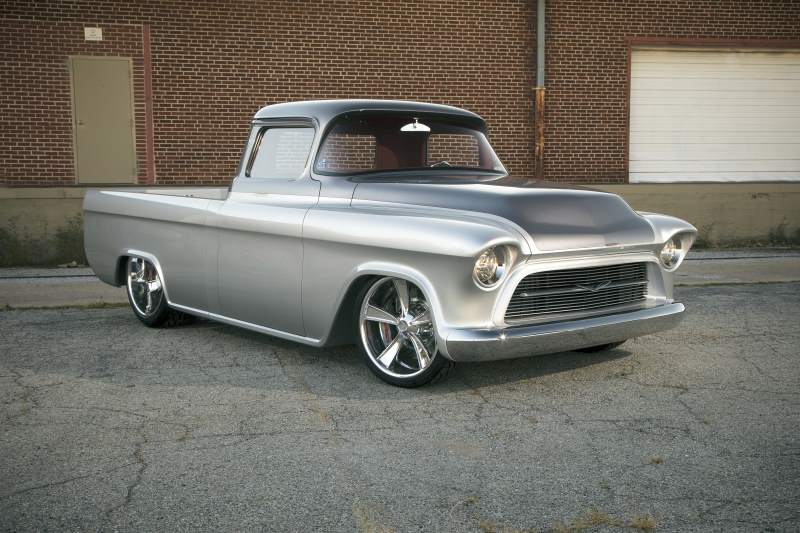 Under the beautiful bonnet sleeps a massive 540 Big Block developing an outstanding 650 hp.

Not only is it the most expensive, but also the most powerful truck on the list as well.


Best 4x4 Truck: New Off-Road Adventure Pickups
The Most Famous Corvette Tuners & Their Most Awesome Creatio...
Mad Max Fury Road Vehicles- The Cars And Bikes From The Movi...
Ford Crown Victoria; One of a Kind Two-Door Convertible
10 Worst Cars Ever Made (And 10 Of The Most Unfairly Judged)
10 Dream Car Nightmares