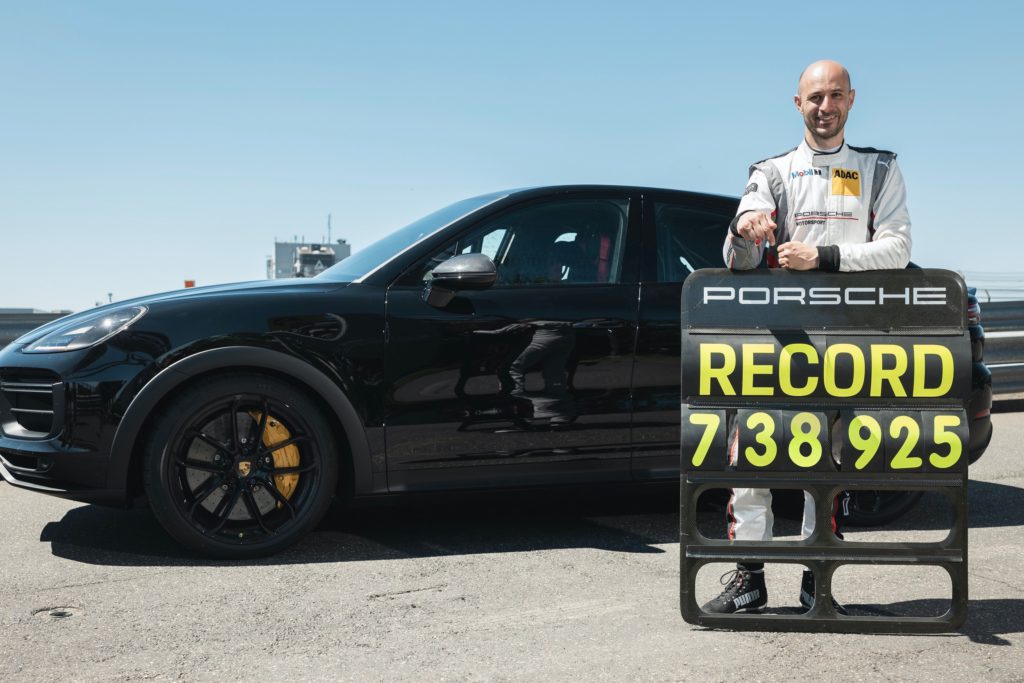 Before even giving the latest version a name, Porsche has taken its soon to be revealed track-spec version of the Cayenne to the most famous race track in the world. The result around the Nürburgring Nordschleife? A production vehicle lap record for the SUV class.

“Over the first few meters of the Nordschleife in this Cayenne, you’re tempted to turn around to make sure that you’re really sitting in a spacious SUV,” said Porsche development driver Lars Kern. “It changed direction at lightning speed in the fast curves such as between Hohe Acht and Eiskurve, with no wobble and no tendency to understeer. Even in this technical stretch, the Cayenne is a real driver’s car that is easy to control.”

Yes, the driver who helped develop this Porsche Cayenne for the Nürburgring is probably a touch biased, but the results speak for themselves. The lap time around the 12.944-mile circuit was an astonishing 7:38.925.

Track-Spec Porsche Cayenne is Faster than a Veyron 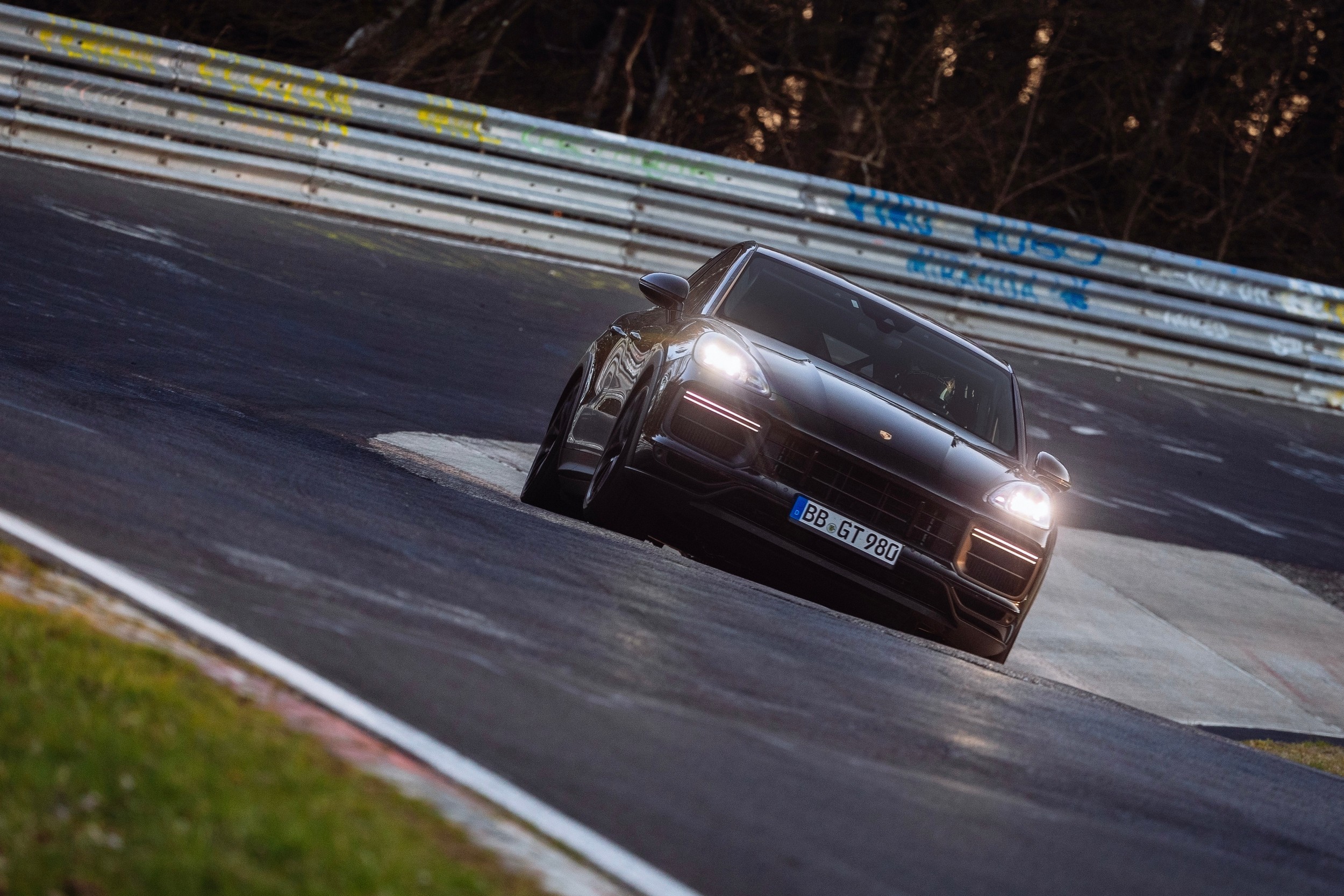 Where does that put this Porsche Cayenne in the pantheon of fast ‘Ring haulers? Try bang on with the 2018 BMW M5 and faster than a last-generation Porsche 911 Turbo S. A whopping 10 seconds quicker than the time reported for the Lamborghini Urus and 15 seconds up on the previous official record holder, the Alfa Romeo Stelvio Quadrifoglio.

It’s even faster around the ring than the original Bugatti Veyron, the quad-turbocharged 1,000 hp top speed monster that would have absolutely devoured the Döttinger Höhe straightaway.

Lars Kern was behind the wheel when the lap record fell last week. He was driving a production-spec version of the latest track-ready version of the Porsche Cayenne coupe that still doesn’t have a name.

Porsche chose Pirelli P Zero Corsa tires in a 22-inch size. The special rubber was developed just for this Cayenne model and will be the standard equipment tire when the vehicle goes on sale.

Stock Except for Safety for Nürburgring Lap Record 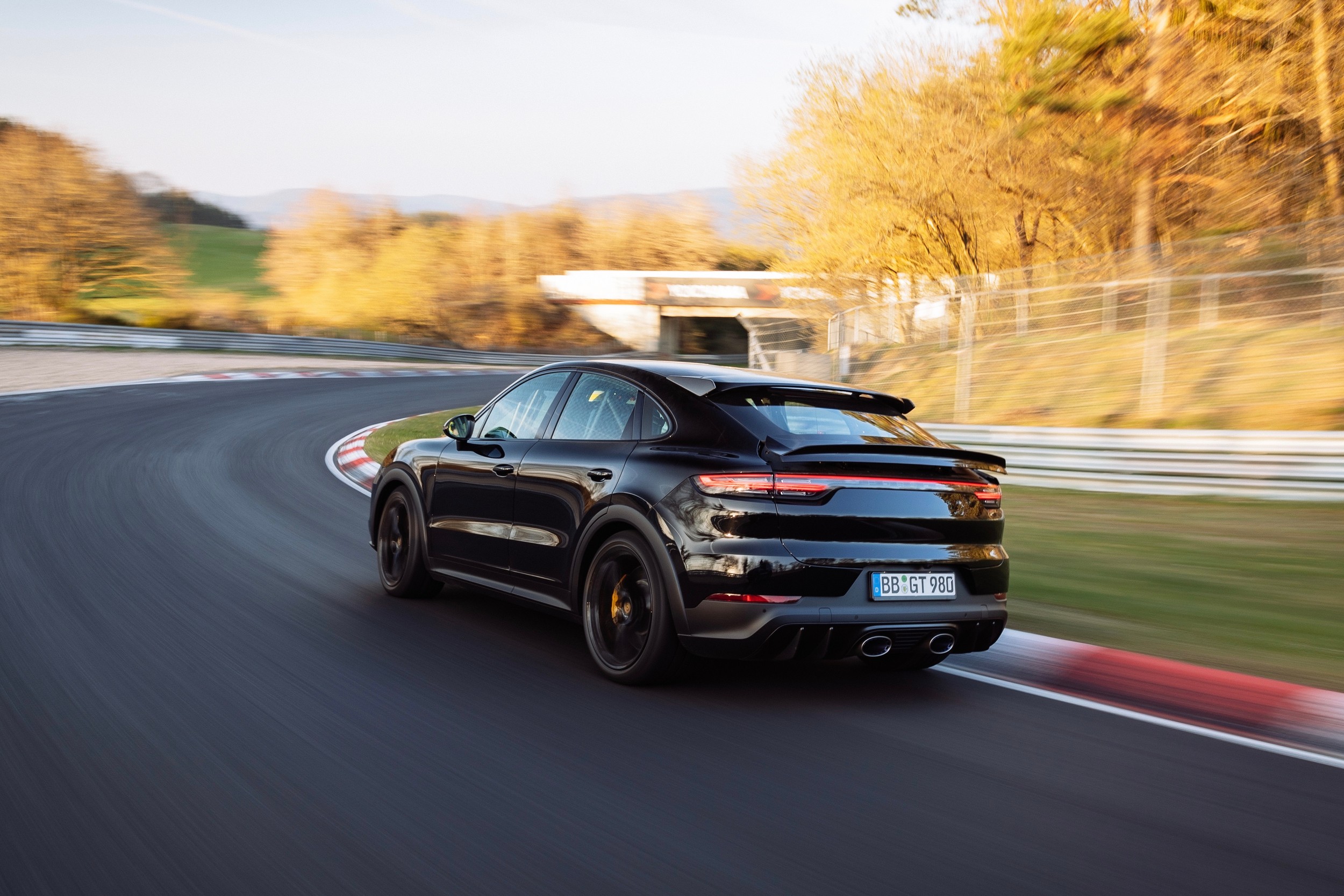 The only changes were those made for safety. The crew fitted a racing seat and a roll cage for protection should the worst happen during the attempt. The quick Cayenne was also wearing some light camouflage to keep something in reserve from errant cameras.

Of course, Porsche was kind enough to film the record ‘Ring lap, offering up a video that shows the complete lap as well as wonderfully detailed telemetry. There is also a quick summary video if you don’t feel like watching the full lap. We think you should watch the whole thing.

Porsche still hasn’t said much about the upcoming Cayenne variant, so here’s what we know so far. It was first displayed with Porsche and rally legend Walter Röhrl doing hot laps behind the wheel on the Hockenheimring circuit in Germany.

At the time, the automaker said that this would be a new variant, based on the Porsche Cayenne Turbo coupe but that “has been designed and developed even more single-mindedly to provide the ultimate in terms of longitudinal and lateral dynamics.”

It sounds like a Cayenne along the lines of Porsche’s 911 GT3 and Cayman GT4. Other changes we know about include active roll stabilization and a “comprehensively revamped” front axle that gives the car wider tires and a more negative camber for a wider contact patch in corners.

A new titanium exhaust pokes from the Cayenne’s rear diffuser. With twin tips that come from the center but aren’t exactly together, either. The current Porsche Cayenne Turbo makes 541 hp, and based on the lap times in this one, we expect the power figures to be closer to 640 hp (watch the bar graph in the video) and for the top speed to be higher than the Turbo’s 286 km/h.

As for what exactly it will do, and when we’ll see it? Porsche says soon, but we’ll still have to wait.

For all things Porsche, look here.