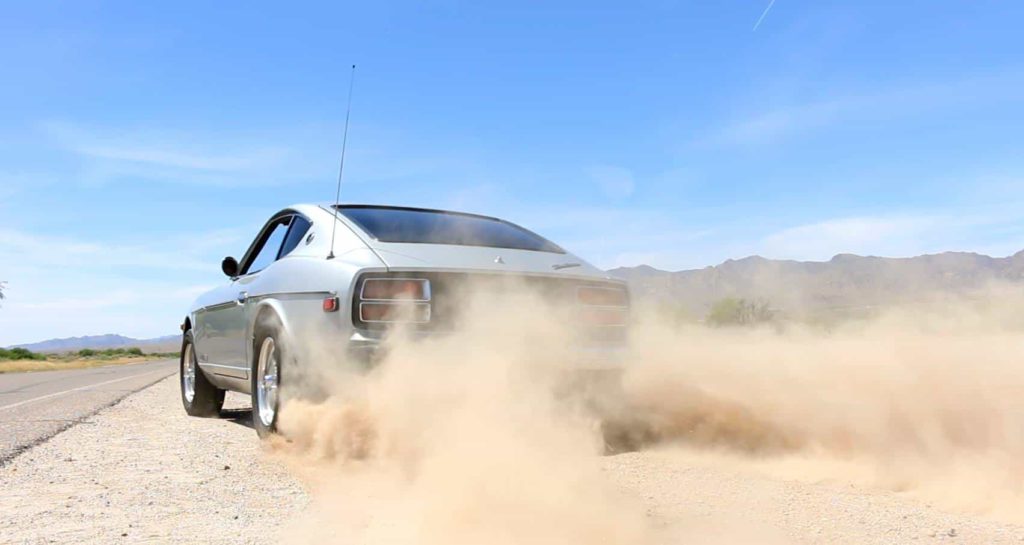 Why do we buy old cars, and who really wants them? When I wrote about vintage station wagons recently, all the experts interviewed concurred on one thing: that the collectible wagon market is driven largely by nostalgia. Because while classic exotics boast power, style and prestige, most of us have much more personal connections to mundane rides like wagons. These could include memories of carefree times such as family holidays or college, or throwback fun with siblings and friends.

Such automotive nostalgia doesn’t just fuel collector car markets. Individual drivers may buy a particular vehicle, collectible or otherwise, based almost entirely on recollections and emotions attached to that model. It could be a car that a parent or older sibling drove during their childhood; their own first car; or one associated with a particularly romantic or exciting chapter of their life.

Americans may have an unusually powerful emotional attraction to cars from our past. In our highly car-dependent society, we spend a lot of time in automobiles. This can result in strong associations between a particular model and the era in which we drove or rode in it. 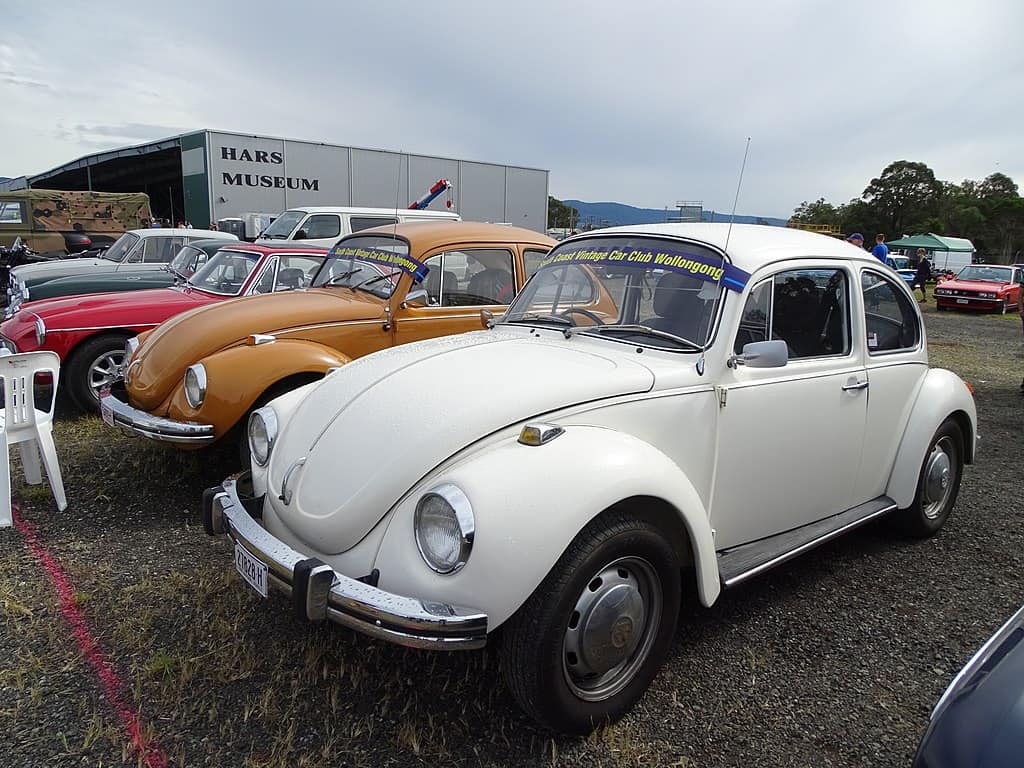 “Memories of vehicles from our past can be a multi-sensory experience – for example, the smell of the seats, the sound of the engine turning over, the look of the grill,” said Janelle Wilson, Professor of Sociology at the University of Minnesota Duluth.

In 2002, Wilson lead a student project that collected peoples’ stories related to the classic Volkswagen Bug. The goal was to ascertain meanings and memories connected to the Bug. These ranged from high school pranks, to having to drive these rear-engined cars backwards up some of Duluth’s steepest hills.

“Our respondents were eager to share with us and, in so doing, they seemed somewhat catapulted back in time,” Wilson recalled. “Their memories and the fondness in the way they recollected them suggested that the VW was associated with nostalgic feelings – a nostalgia that likely revolved around a previous era – both culturally and more personally with respect to their own coming of age.”

The Historian and the BMW

Matt Taylor, a historian and associate provost for a Houston research university, bought a 1974 BMW largely because of his childhood memories of that model.

When, in 1990, Taylor saw a ’74 2002 for sale on a Houston street corner, he had to have it. Like a lot of people who buy a car out of nostalgia, he went to considerable, almost irrational, trouble to own it. A cash-strapped grad student at the time, he had to take out a loan to buy the Beemer.

“Even though my mechanic told me it had some issues, and I couldn’t afford it, I went ahead with the purchase,” Taylor explained.  “Of course, the old BMW ended up needing lots of repairs while I owned it, but I loved it anyway.”

Taylor’s connection to that car remains so potent that when, just last year, he bought a new Honda Civic Si, he chose a “Tonic Yellow” color because this closely resembled that of his BMW.

A person’s first car can hold a particular place in their heart and memory.

“[This] could primarily be associated with where we were in the life course at the time we began driving,” said Wilson, whose book Nostalgia: Sanctuary of Meaning published in 2005. “It’s a time of constructing our identity, experiencing newfound freedom and responsibility, spending time with family and friends.”

As Wilson explained, nostalgia is not simply a passive “living in the past” phenomenon. Sociologists have long made a connection between nostalgia and identity – namely, that nostalgia can facilitate the continuity of identity. So nostalgic experience often involves an active engagement with the past. This can actually make someone more attuned to their present circumstances.

“Thinking back to our first car inevitably brings a ‘that was then, this is now’ contemplation,” Wilson explained. “We may look back fondly to a time when we were younger, inexperienced, and also without a lot of means … If we now find ourselves in a more mature and stable position and able to afford a more dependable vehicle, this allows us to see how far we have come.”

Ironically, nostalgia for a particular vehicle may be a simultaneous testament to both someone’s sense of individuality and independence, and to their connection to others.

“We might remember a first vehicle, and this corresponds to the feeling of independence, freedom, and coming of age,” Wilson continued. “At the same time that it corresponds to fond memories with friends and family members.”

Taylor’s connection to the BMW 2002 is perhaps a classic case of this “dual nostalgia”. That model triggers in him both childhood memories of exciting drives with his older brother-in-law and, later, of forging his own sense of individuality as a young adult.

“I had no business taking on debt, knowing that I was at least a year away from finishing grad school,” said Taylor. “But I went for it and believe, to this day, that the decision helped put my life on to a positive trajectory.”

The Creative and the Datsun

Andy Smith’s love for his 1978 Datsun 280Z expresses a connection to both childhood memories of a similar car, and an evolving nostalgia wrapped up in his long relationship with the car itself. A photographer, musician and writer in Monrovia, Calif., he has owned the pristine Z since 1997.

“I was a child during the ‘80s, so Z-cars were very popular,” he recalled. “My mother had a friend who picked us up in a beautiful two-toned blue and silver 280ZX, where I sat on my mom’s lap. I never forgot about that car.” 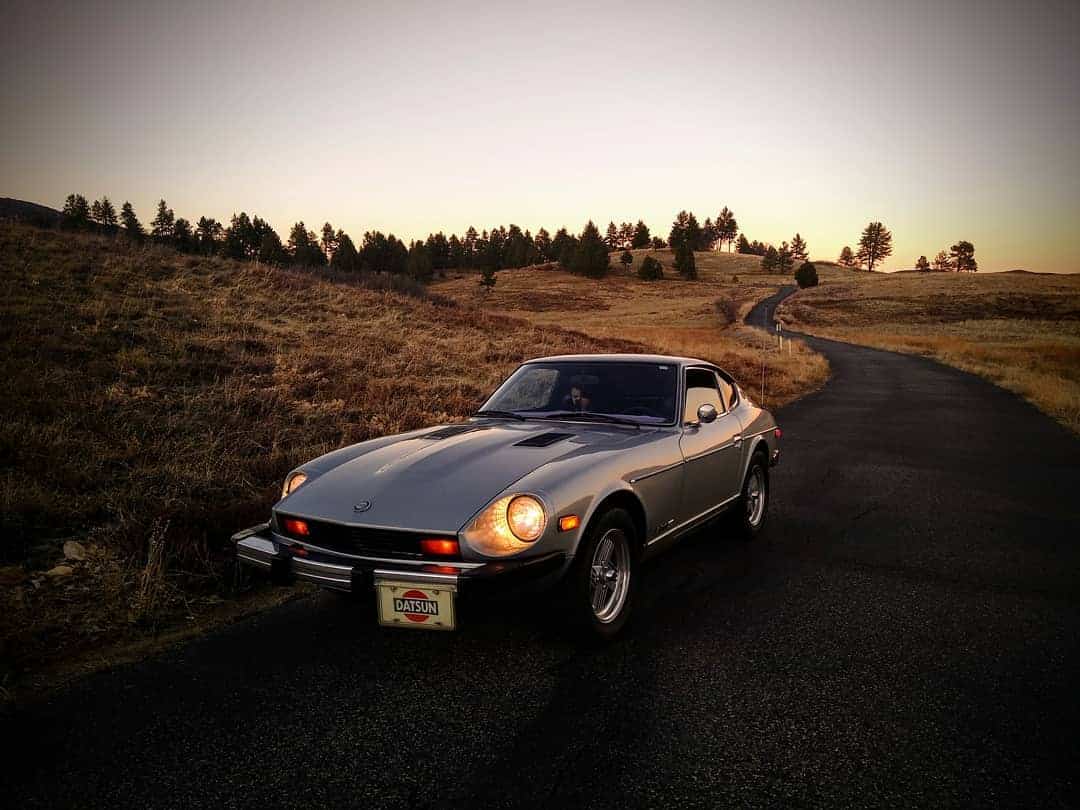 Having owned his silver 280Z for nearly a quarter-century, Smith has also accumulated countless memories in his own car.

“I view my Z as a longtime companion. We’ve journeyed across the country together,” he said. “So there’s a romantic/sentimental element of my story with her … There is a sense that part of my early adult life is encapsulated in the car.”

We may develop a nostalgic connection to a vehicle we’ve never actually ridden in. I bought a forest green Land Rover almost entirely because our rather glamorous childhood neighbors owned a similar car that I’d admired from afar.

“This is similar to the term, ‘displaced nostalgia,’ which refers to our nostalgia for a time that we did not experience firsthand,” offered Wilson. “There are some vehicles (like the VW Bug) that have a cultural significance that can transcend our own personal experience; we see the automobile and a wave of ‘indirect nostalgia’ comes over us.”

This can even extend to nostalgia for a vehicle that we’ve only seen on film or in print. We may nonetheless associate that car with not only a cool movie, show or character, but also with the perhaps untroubled times when we first enjoyed these.

Smith said he was really into the Transformers robot superhero franchise, which featured Z cars as characters. A former co-worker of mine bought a Volvo P1800 because he loved watching The Saint as a kid, in which star Ian Ogilvy drove one. Another friend bought an old, white VW Beetle in part because of childhood memories of the Bug-centered Herbie movies.

“Because my parents came of age in the 1950s and because my favorite show as a child was ‘Happy Days’ (which was set in the 1950s), I tend to have some of that ‘indirect nostalgia’ when I see automobiles from that decade,” said Wilson. 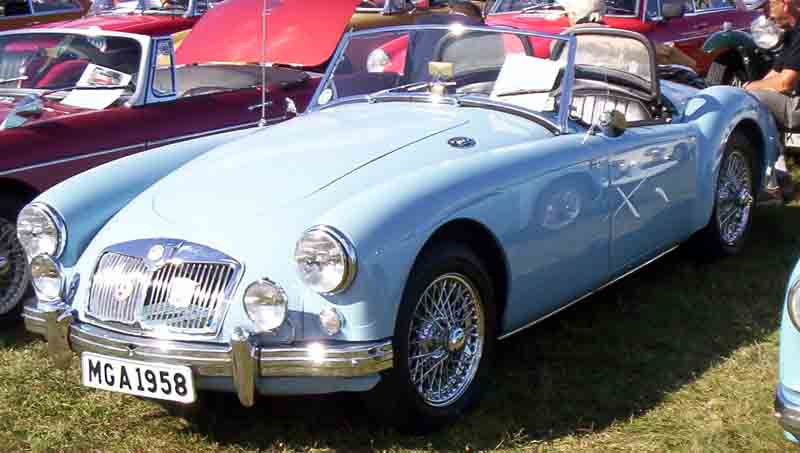 The Publicist and the MG

Henry Eshelman, a publicist in Los Angeles, bought a 1959 MG MGA largely out of nostalgia for his older brother’s first car, a 1968 MGB GT.

“I remember the color, the fit and finish, the smallness compared to the family American ‘land yachts’ of the time,” he said. “The way the doors sounded when they shut … the leather interior, the smell and, above all, the sound and gearbox.”

Coming from a family of classic car lovers in Lancaster, Pa., his interest in the MG marque reached back still further. 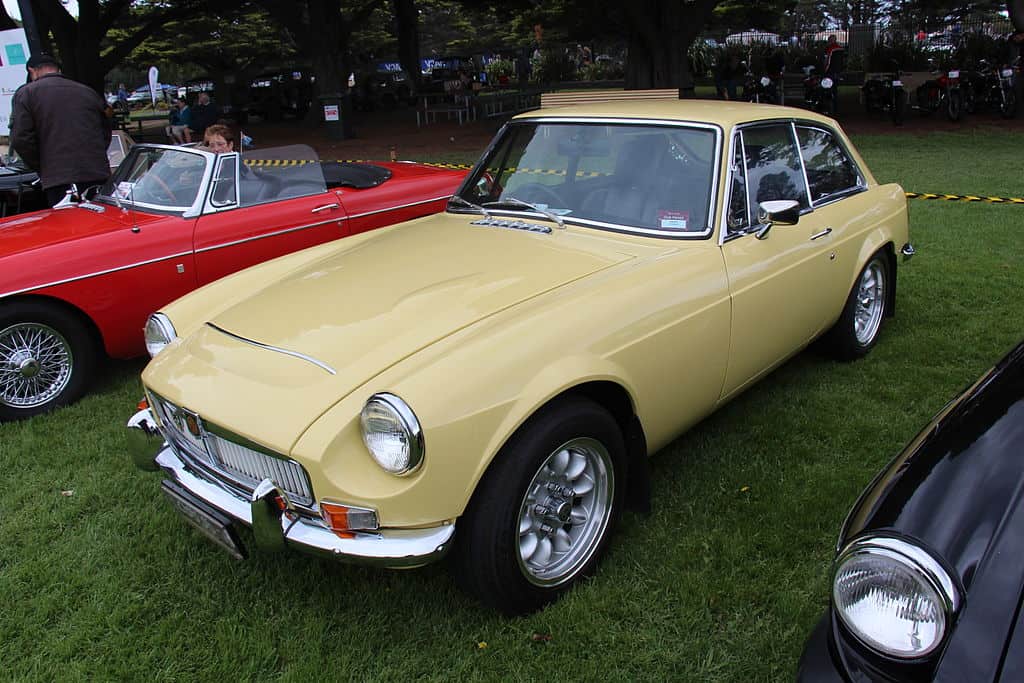 “I had nostalgia for MG from my childhood,” he recounted. “My dad gave me volumes of compendia of British classic car magazines called ‘Classic Cars in Profile,’ which featured the MGA and other models.

His recollections of his brother’s MGB GT are overwhelming sensory, and interwoven with warm memories of both his sibling and the Pennsylvania countryside through which they would drive together.

“I was crammed into the ‘back seat’ – the shelf – for the first ride in it on Snake Hill Road in Lancaster, being tossed around in the dips and swooping hills of our farm country,” he said. “I was five years younger than him … I thought of him as pretty cool to have a British sports car.”

Eshelman also bought a Mercedes-Benz in adulthood, having been blown away by driving a family friend’s 1973 SL as a teenager. He said his family named all their cars. Eshelman christened his 1966 Mercedes 250SE coupe ‘Klaus’ and describes the vehicle as having been “part of our family.” He named his 1971 Super Beetle convertible “Bob.”

Owners of “nostalgia vehicles” commonly humanize their cars in this way, and even project personalities onto them (Eshelman recalled his 250SE as “a big, dumb golden Lab of a car”). Many, like Eshelman and Smith, refer to their beloved rides as “she” or “he” rather than just “it.”

“The relationship that some people have with their automobiles in some ways resembles other relationships in their lives,” said Wilson, who herself harbors fond recollections of riding in her big brother’s Datsun. “It is pretty common for people to name their car; this alone suggests a powerful connection to the automobile.” 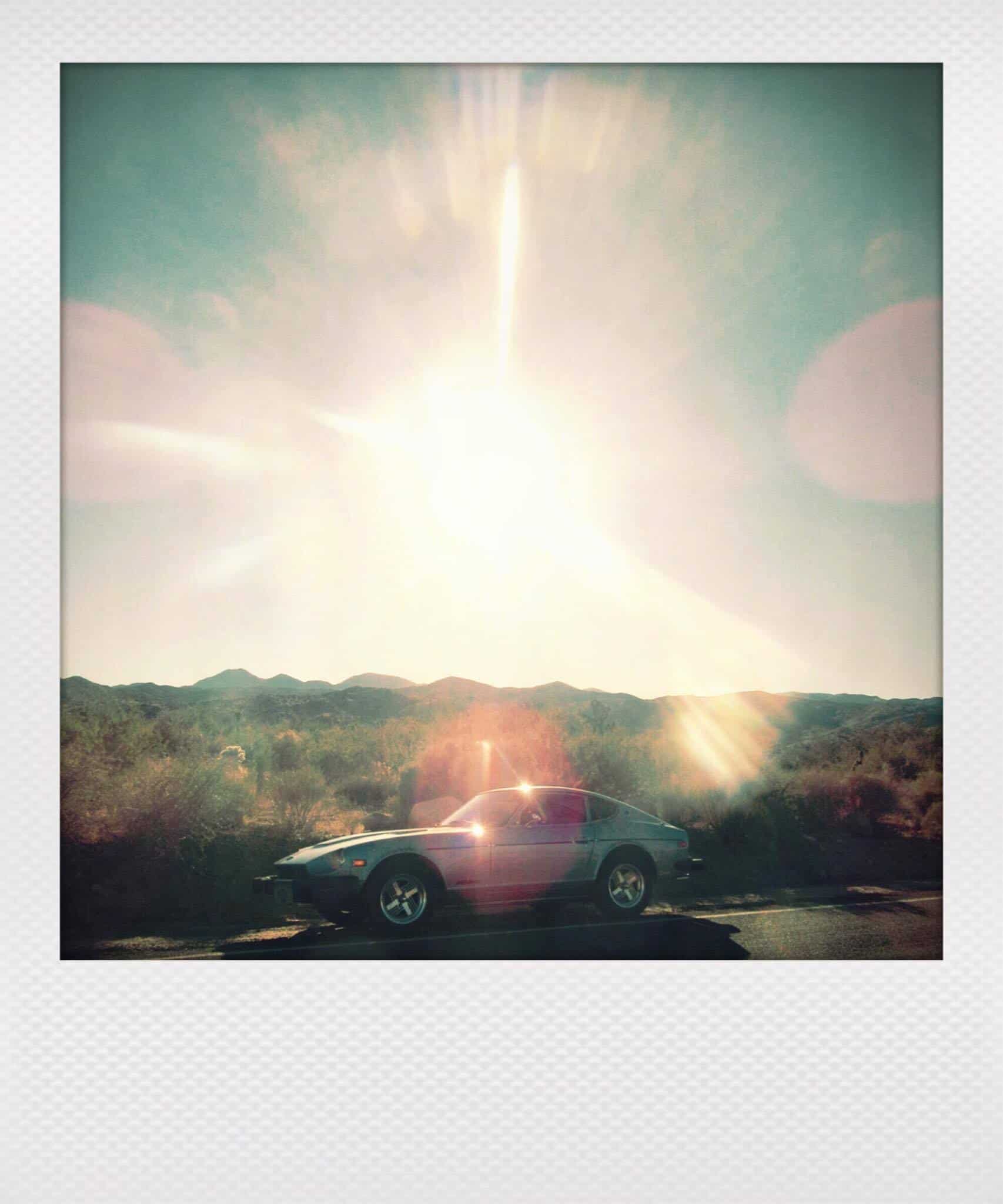 An individual’s nostalgia for a particular car may override their intellectual understanding of it not being a “sensible” choice of purchase later in life. Matt Taylor’s BMW 2002 proved to be unreliable. Eshelman discovered that his MGA had been welded back together after a serious accident. My Land Rover was an absolute money pit. Some of the people interviewed by Wilson’s students expressed fond associations with the VW Bug despite their memories of it including breakdowns or malfunctions.

“Nostalgia can play a significant role in a person purchasing a particular model of car,” Wilson concluded. “Sometimes individuals end up having to sell a car because of their present financial situation; they might regret this for several years and long to someday have that same model again.”

Nostalgia may ostensibly appear to be an irrational reason to buy a car. Yet maybe it has a place in a purchase decision nonetheless. Because, in a holistic sense, a nostalgic connection to a car can be as important to a driver as, say, a fancy interior or prestigious nameplate.

“Experiencing nostalgia can buffer us from loneliness and depression,” Wilson noted. “In these times, maybe we should lean into nostalgia a bit.”

So have you ever bought a car out of nostalgia? Or is there a memory-laden model you’re still seeking or considering for future purchases?