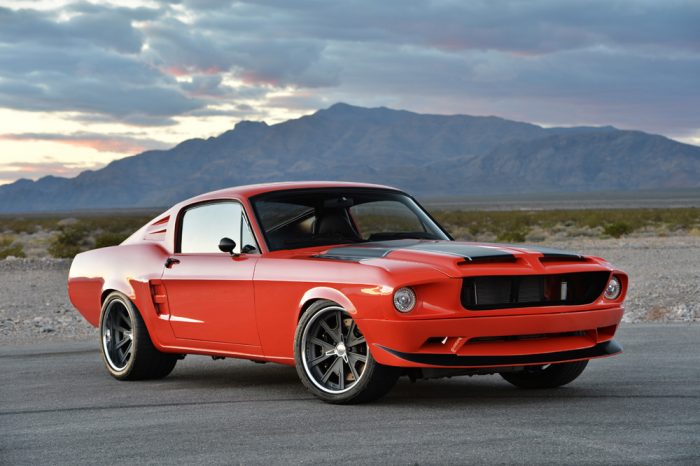 If there were ever a car that lent itself to a restomod upgrade, it’s a ’67-’68 Mustang. While Eleanor inspired many restomod Mustang efforts, here are 7 that created their own unique look.

Eleanor from “Gone in 60 Seconds” is at one extreme, a resto mod can also be quite a bit simpler – perhaps some minor engine upgrades, four wheel disc brake conversion, modern wheels, tires, and suspension mods to complement the new rubber. The interpretation is completely in the mind of the builder. 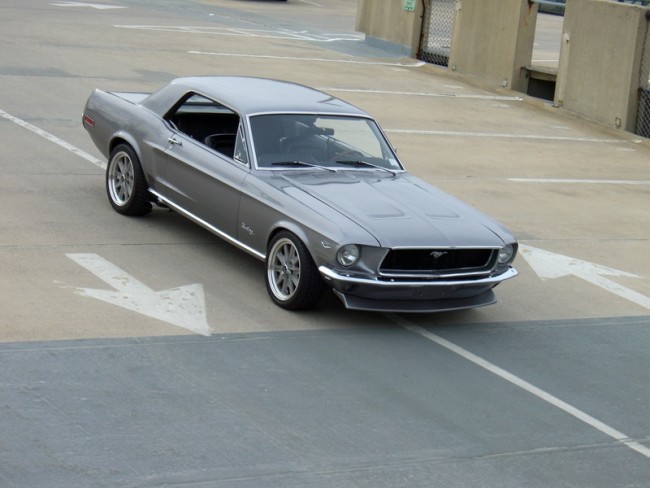 So, if you want to make yourself some kind of Ford Mustang Fast and Furious mash up, we’ve got some great inspiration for you. While these examples are all beautiful vintage Mustang models, you can try and restore and modify any classic cheap muscle car for sale that you can afford to work on, from Ford, Chevrolet, Dodge, or any of the other classics. Why limit yourself to a Mustang when a Chevrolet Corvette convertible restomod might be more achievable? So, without further ado, let’s take a look at 7 epic restomod Mustang examples!

Need Some Inspiration For Your Mustang Restomod Project? 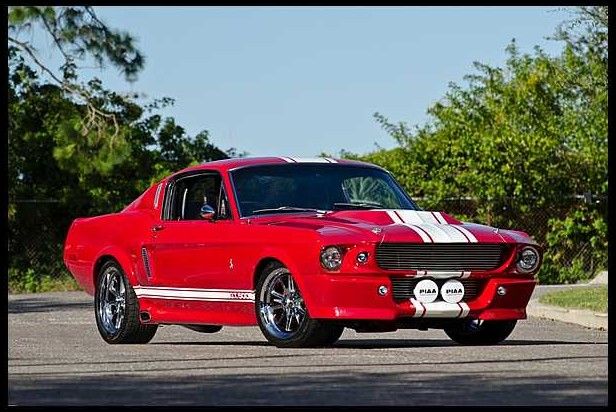 In the film “Gone in 60 Seconds” Memphis Raines and his crew steal 50 cars. Since the film opened in 2000  our guess is that somewhere around 50 Mustangs to the power of 10 have been converted to appear in some way, shape, or form as “Eleanor”. This 1968 Ford Mustang resto mod is a refreshing example of a design that incorporates some elements from “Eleanor” but goes its own way in other areas. The red fastback coupe boasts a 440 CID 600 hp Windsor V-8 under the bulging hood, backed by a Tremec 600 TKO 5-speed transmitting all that power back  to a Heidts four-link rear end with a Traction-Lok  differential carrying 3.73 gears. A Heidts Super Ride 2 front end fitted  slotted, cross-drilled disc brakes improve handling and braking, and Mustangs to Fear created the unique interior highlighted by a carbon fiber dash. 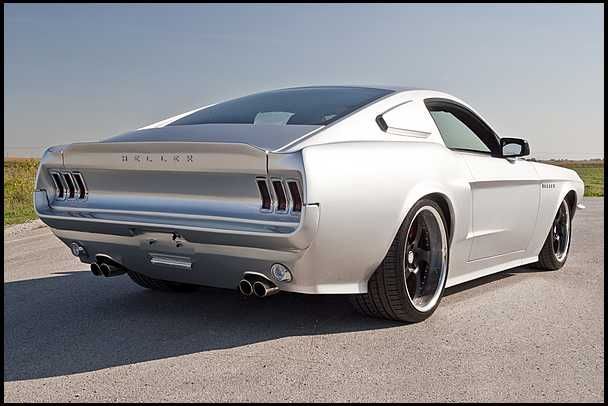 I’m sure you’ll notice immediately that there’s something different about this car when you look at the photo. The car is actually a 2005 Mustang GT that, over a two year period,  has had all its sheetmetal removed and replaced with panels for a 1967 Fastback. The result is a restomod Mustang with the look of a ’67 GT but all the comfort, convenience, and performance of an ’05. The recreation is powered by a 4.6 L V-8 engine with Saleen supercharger, 5-speed automatic, 2005 GT suspension and massive Brembo four-wheel disc brakes  pull it down to a stop faster than any ’67 ever could. This is a serious muscle car! 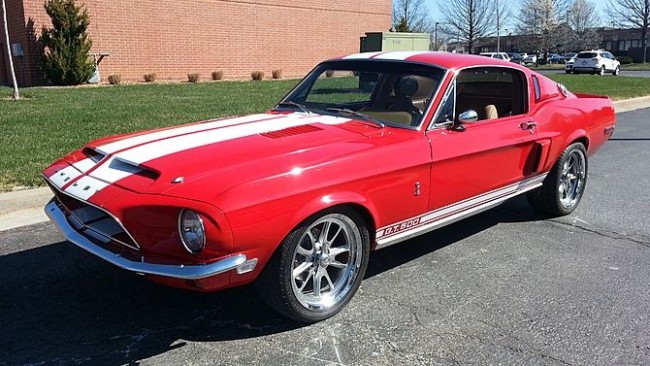 I think about it for a moment, this car makes a great deal of sense. If you’re undertaking a significant rebuild, it’s not that much more difficult to recreate a Shelby than it is to rebuild a Mustang to FoMoCo specs. This very convincing replica is powered by an appropriate supercharged Ford Modular V8 from the 2011-2012 Ford Shelby GT500 that produces 550 hp, driving through a Tremec six-speed transmission. Four wheel heavy duty disc brakes round out this desirable conversion. 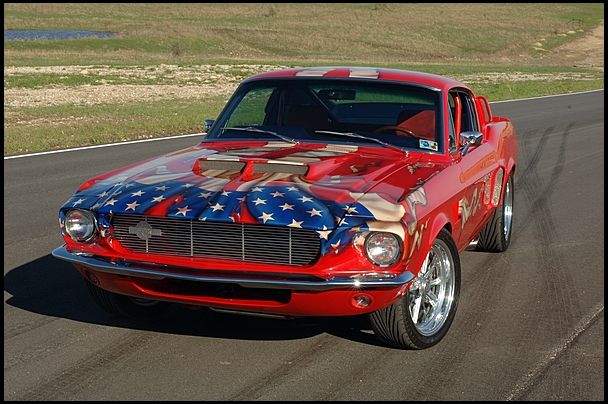 If you’re inclined to be patriotic, this may be the restro mod Mustang for you. Before we get into the hardware it’s worth noting that the spectacular custom paint job was created a few years ago by George Barris, the recently-departed King of the Kustomizers. Of course you can spot the Shelby body upgrades under the paint. Under that priceless hood is an all-aluminum 427 V8 producing 600 hp connected to a Tremec 5-speed. In addition to the small fortune the owner invested in paint, there’s $3,500 worth of audio/video equipment in the car (that’s more than in my house!). 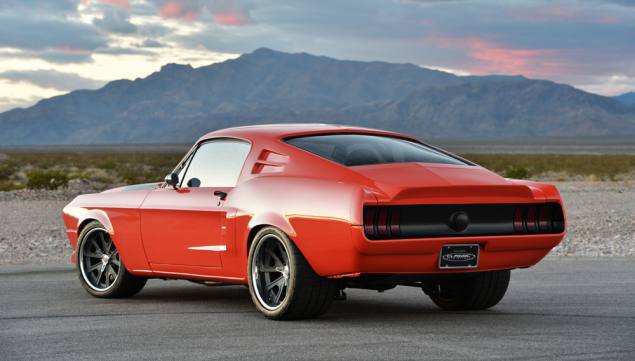 Here’s a restomod Mustang that goes to 11.  The team at CR Supercars strips a Mustang down to its core shell and replaces the steel panels with new composite bodywork developed using a 3-D mold-making technique. Not only do the new body panels cut weight but they are also designed to improve the car’s aerodynamics.  Fitted under the hood is a 475 hp Ford Racing Boss 302 V-8, backed by a Tremec T56 Magnum 6-speed transmission, and Corvette-based suspension components. 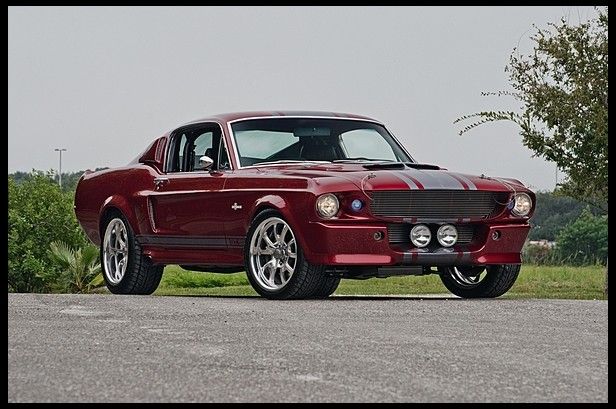 You know you’ve done a good (actually more than a good job) when your resto mod appears in “Modified Mustangs and Fords” and “Mustang Magazine.” What you notice first about this car is the PPG Red Fire paint and Silver Super Snake stripe, but under the hood lurks a 500 hp Roush-built aluminum FE 468 CID V8 stuffed with 10.0:1 pistons, topped with Edelbrock aluminum heads and intake, and a Holley 870 CFM four-barrel carburetor. A Tremec TKO 600 5-speed carries the power back to a  G-Bar four-link Fab 9″ rear end with 3.70:1 R&P. Keeping this bad boy on the road is the responsibility of Total Control coilover suspension and power disc brakes using Wilwood 13-inch rotors. This beast has even been autographed by Jack Roush and the late Carroll Shelby. 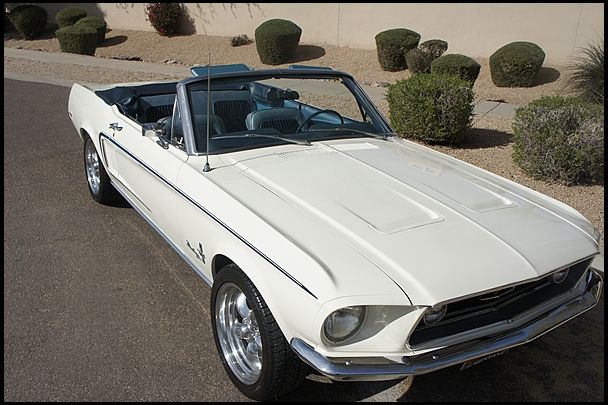 At first appearance this ’68 Mustang convertible may seem unremarkable, but in reality its the single example of a car built to its specifications. First, under the hood is a rare J-Code four-barrel 302 V8, the same engine as in the Shelby GT350 for 1968, the one and only year the engine was available in the Mustang (low sales). Second, this car has a rare heater-delete because it was ordered for Hawaii! Upgrades are very subtle and easily reversible: four-wheel Wilwood disc brakes, 17″ American Racing Torque Thrust wheels, and a retrofit Vintage Air a/c system 9which apparently they didn’t originally order for Hawaii either.


Epic Battle: 2015 BMW M4 vs. 2016 Mustang GT350
15 Of the Best Looking Digital Gauges Ever Offered in a Car ...
8 Reasons Why The American Ford Mustang Is Better Than The E...
2022 Honda Civic: Adulthood's Silver Lining
2021 Ford Mustang Mach 1: A Track Day Beast Capable of Commu...
Facts You Didn't Know About Presidential Limo "The Beast"